As I walked a little to get out of the path of a reversing tempo traveler next to Tribhuan Hotel, I looked around and could see the clouds in distance parting to reveal snow-laden Mountain Ranges. Out came the mobile phone for a photograph that was to become the only photograph of the entire trip to feature them. 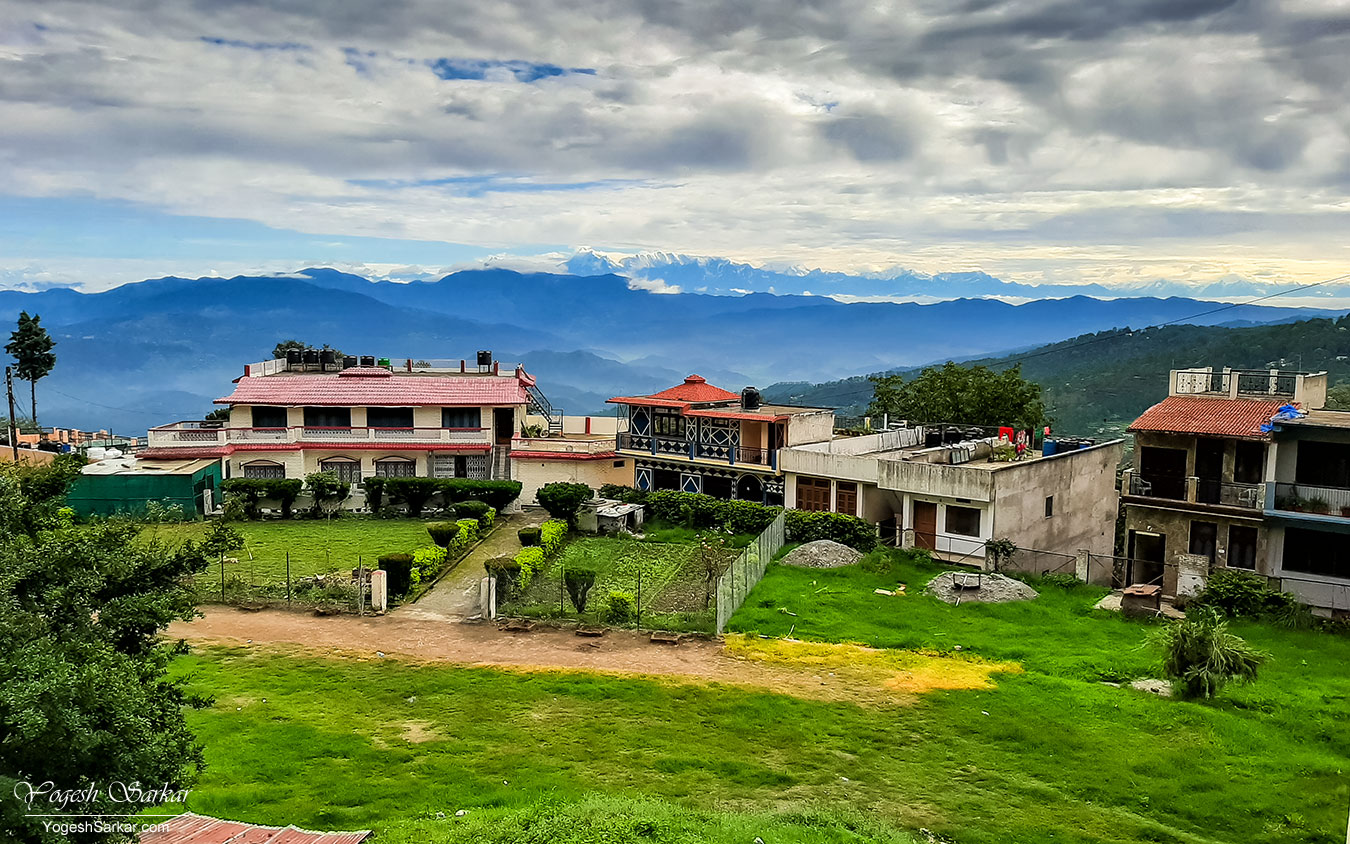 Oh, how I wish now, I had taken the time to click another image with my DSLR, but with a growling stomach, luggage on shoulders, sleep-deprived eyes and a confused state of mind, I didn’t even take another photo from mobile, let alone trouble with the DSLR.

After taking the photograph, I started walking ahead and while doing that, I made up my mind to travel to the KMVN property and stay there. When I asked a shopkeeper, how to do that, he directed me towards the next chowk and told me I could find a taxi for it, after climbing the hairpin bend.

After a couple of hundred meters, I finally reached the spot and spoke with the taxi drivers. Mr. Lalit Sati (9675636697), agreed to drive me to the KMVN for Rs. 150. He was from Chaubatia Village, one of the sightseeing spots for visitors to Ranikhet and came to Ranikhet each day, ferrying schoolchildren. He agreed to show me around Ranikhet for Rs. 1500 (half day tour) and after jotting down his number, I got off in front of the KMVN and went in.

As usual, KMVN had a widespread out property, though from the looks of it, apart from a handful of staff, no one else was in. 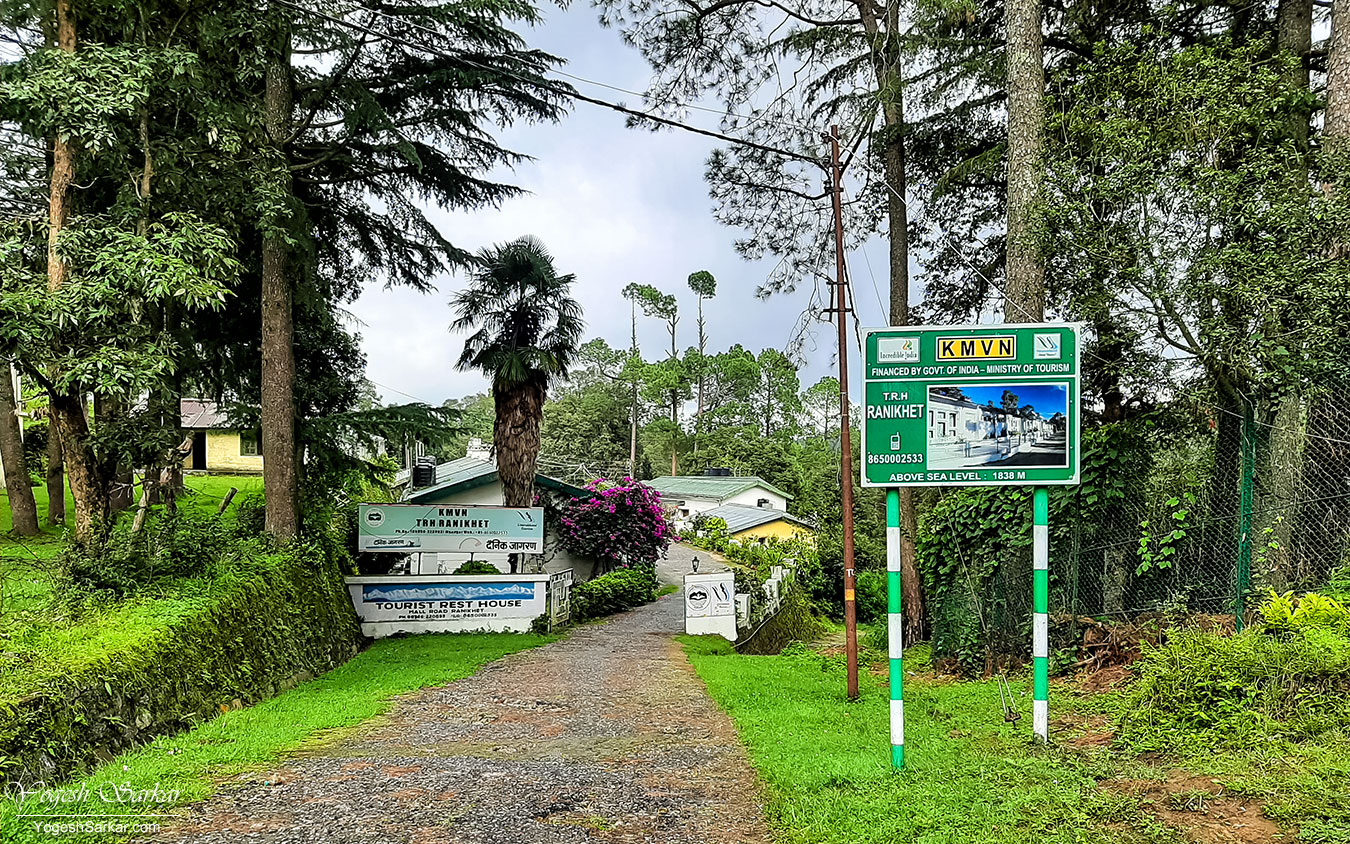 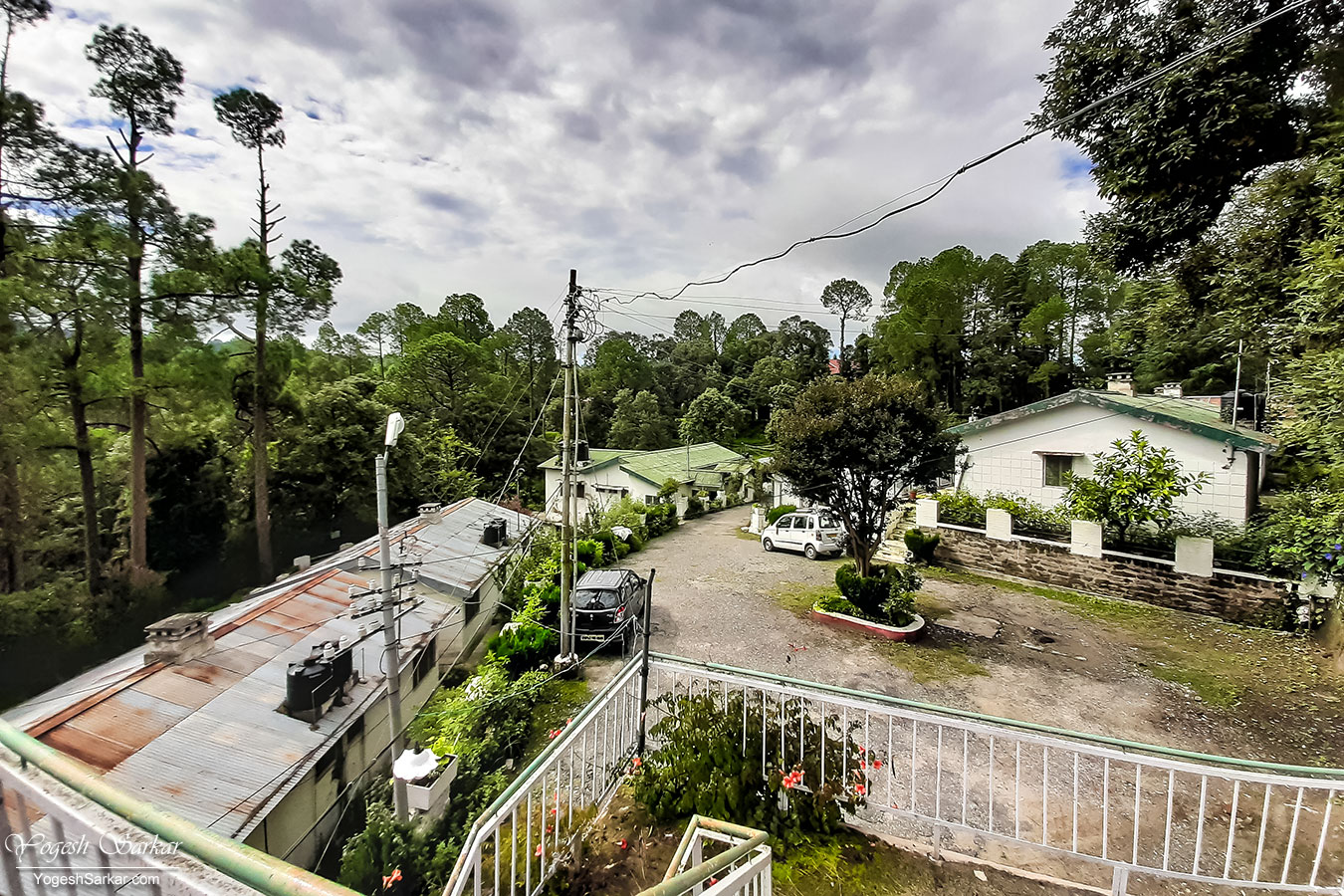 They had a deluxe room for Rs. 1,250 a night, super deluxe for Rs. 1,700 a night and luxury for Rs. 3,100 a night, all with free breakfast. After checking out the super deluxe and deluxe, I decided to settle into the deluxe room, since it was more than enough for me and away from the main wing, for added solitude. Though it also meant no Wi-Fi and since there is no JIO network in Ranikhet, I was dependent on the EDGE network of BSNL. 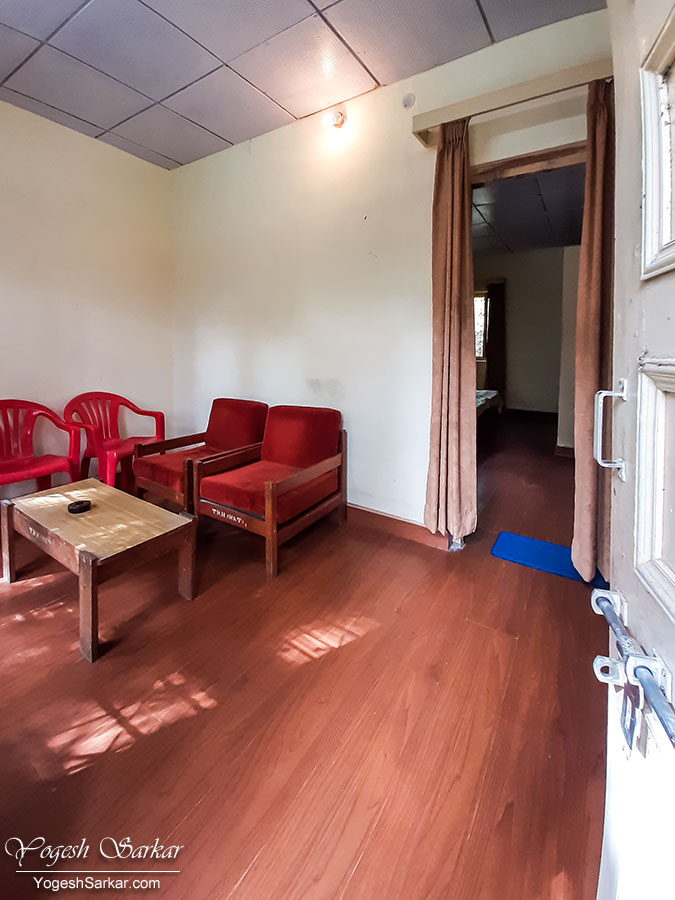 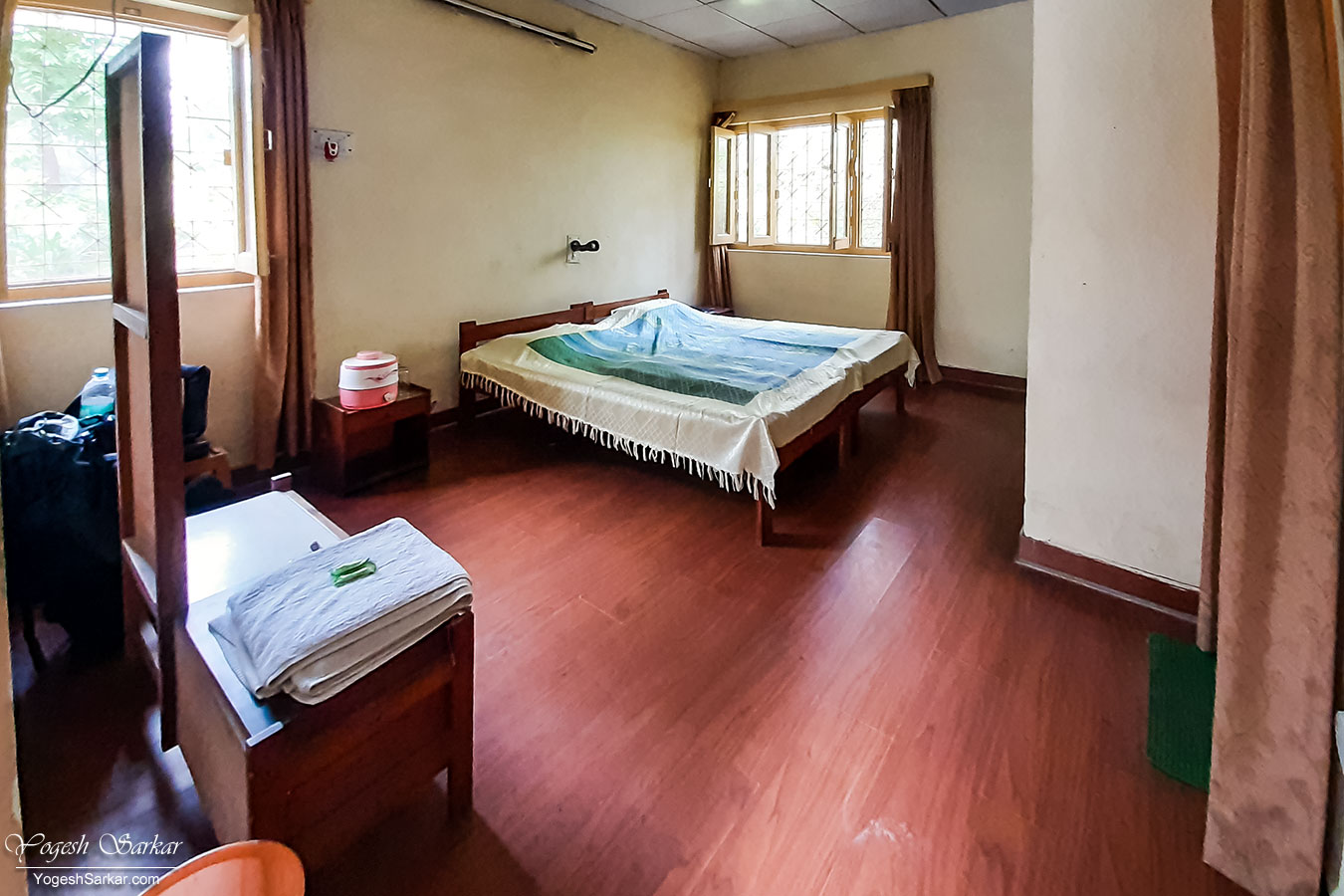 I asked for breakfast consisting of aloo paratha, curd, and tea since I was famished and after about half an hour, it was served. After having my fill, I wrote a little in my journal and then, after taking a shower, tried to get some sleep.

Even though both the deluxe and super deluxe rooms I had checked out had that damp odor and I didn’t think much of it at that time, it seemed rather thick when I lay down to sleep. Still, I thought nothing and slept for a couple of hours, before waking up.

Since I was planning to do sightseeing tomorrow, I was free to stay put in the room or roam around on foot. After a bit of contemplation, I decided to go out, have lunch and then maybe look for a spot to photograph the sunset.

After getting ready and taking with me only my mobile phone, a microfiber cloth to clean its lens and a light rain jacket, I was out of the room around 3:30 pm and used a bit of Wi-Fi and clicked a few photographs of the various flowers at the KMVN, before heading out to the Mall. 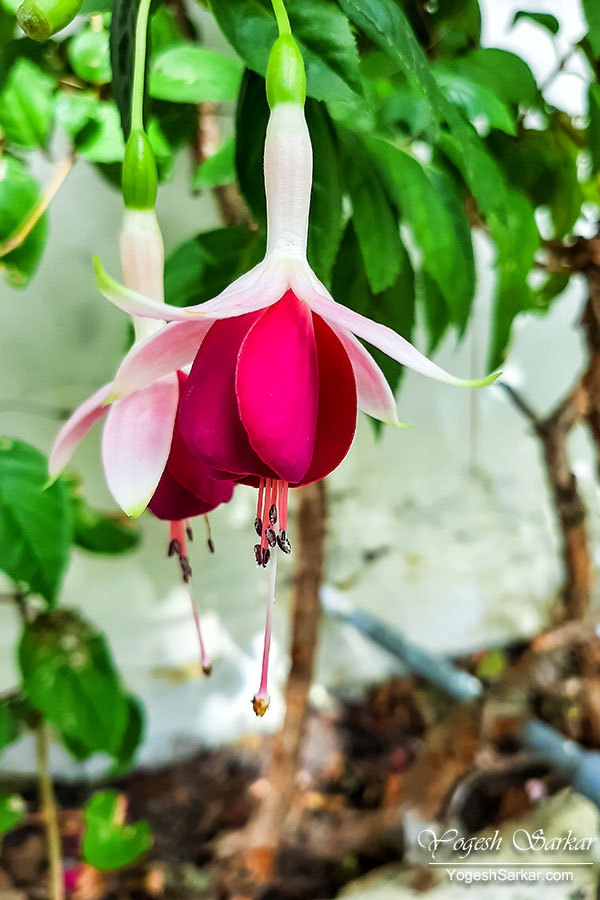 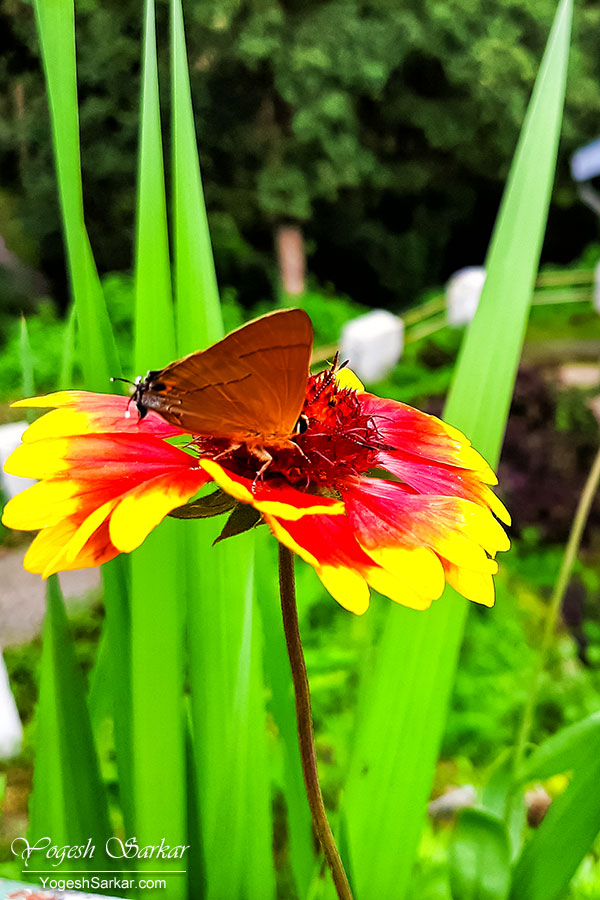 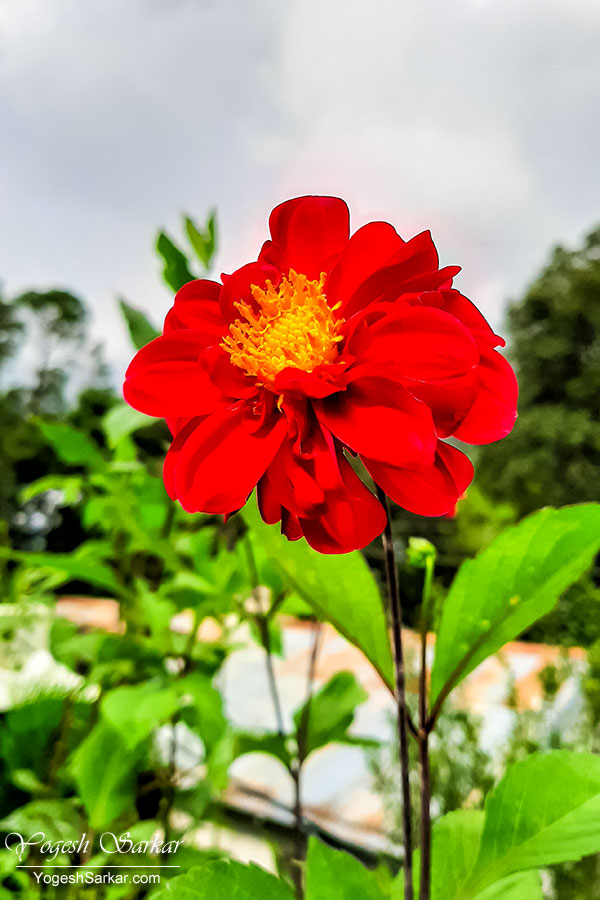 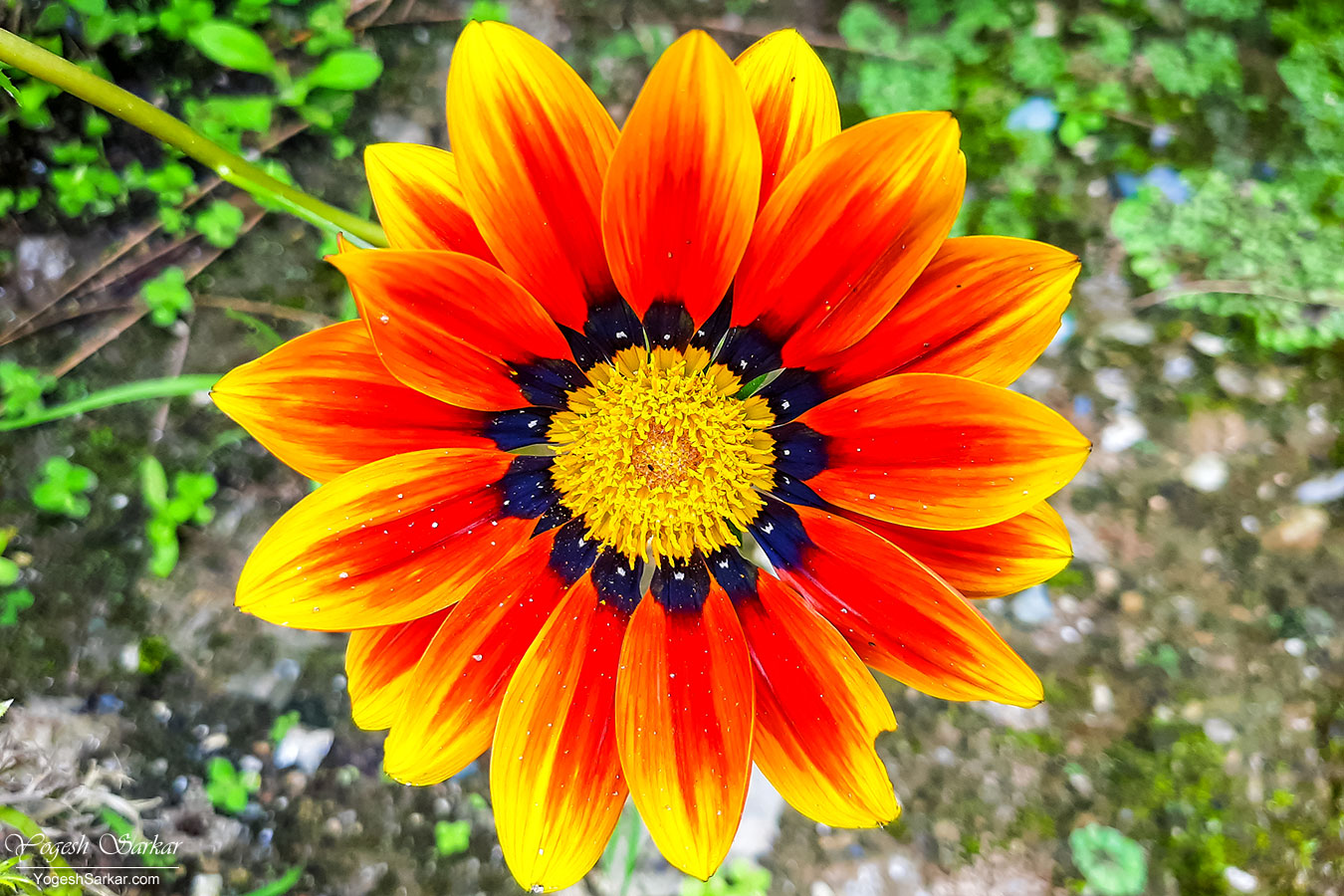 A moss-covered walkway led me to the famed Mall Road, though in comparison to other hill stations, it was rather sparse, with a handful of small shops, a hotel and a couple of official buildings. 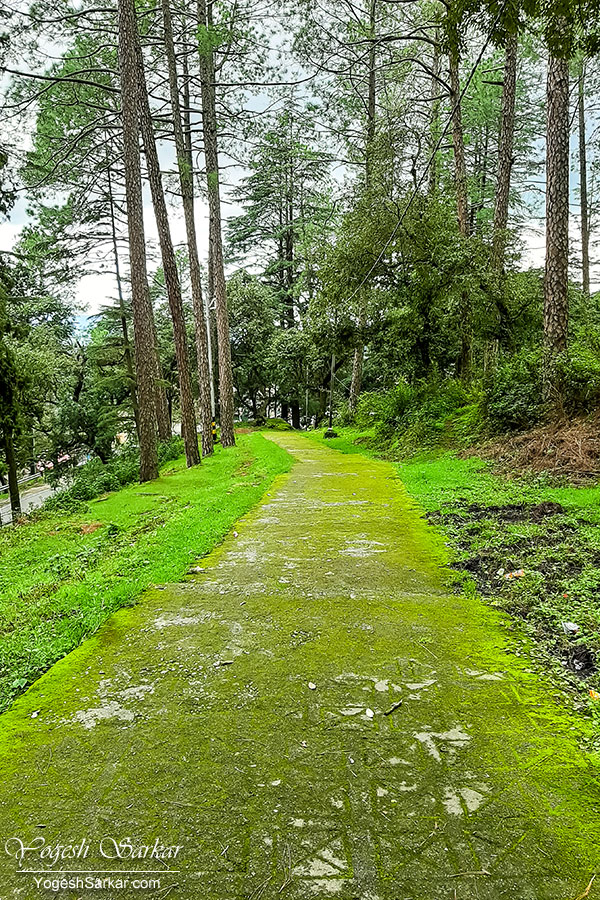 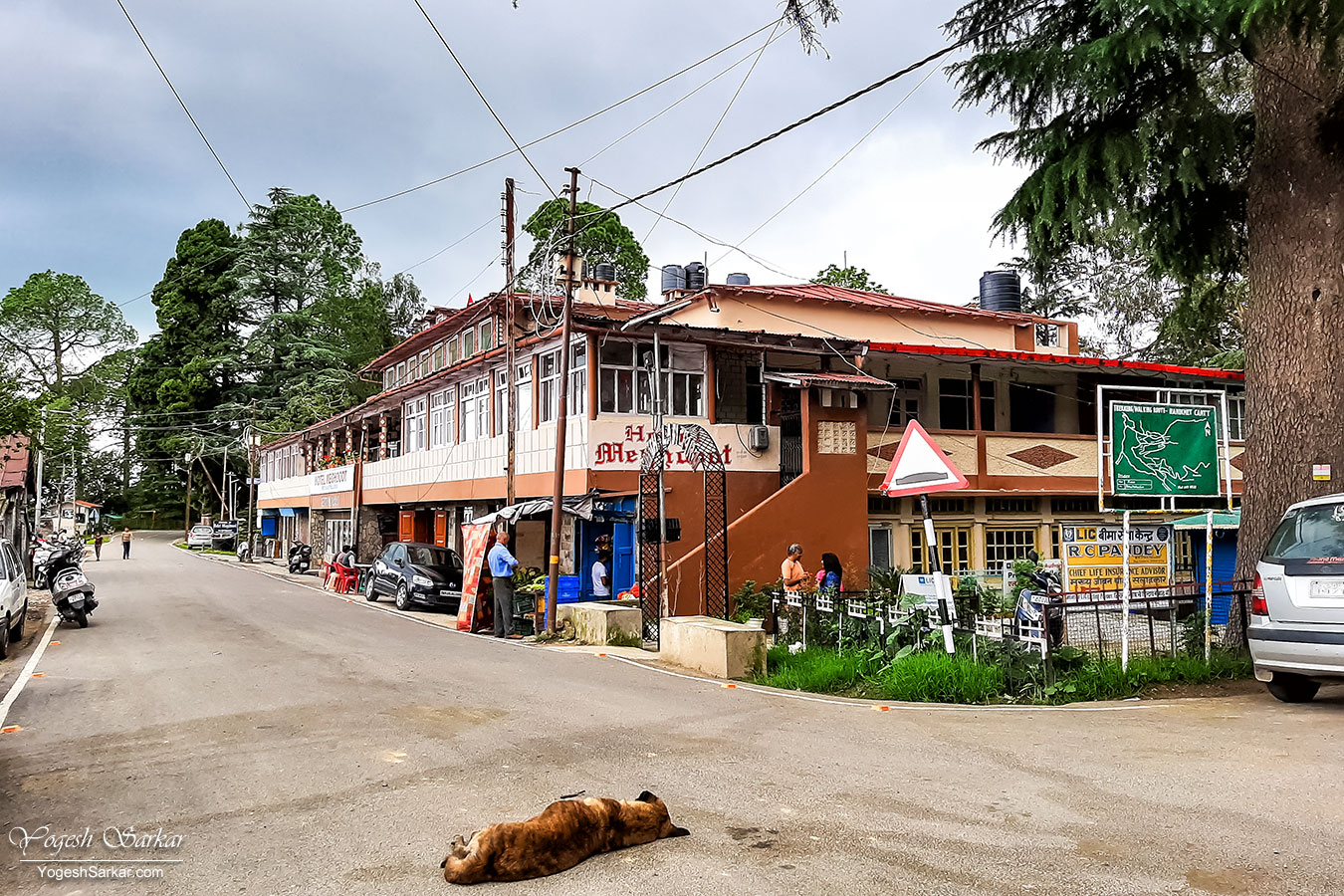 I decided to have lunch at Hotel Meghdoot, the only hotel on the Mall Road. 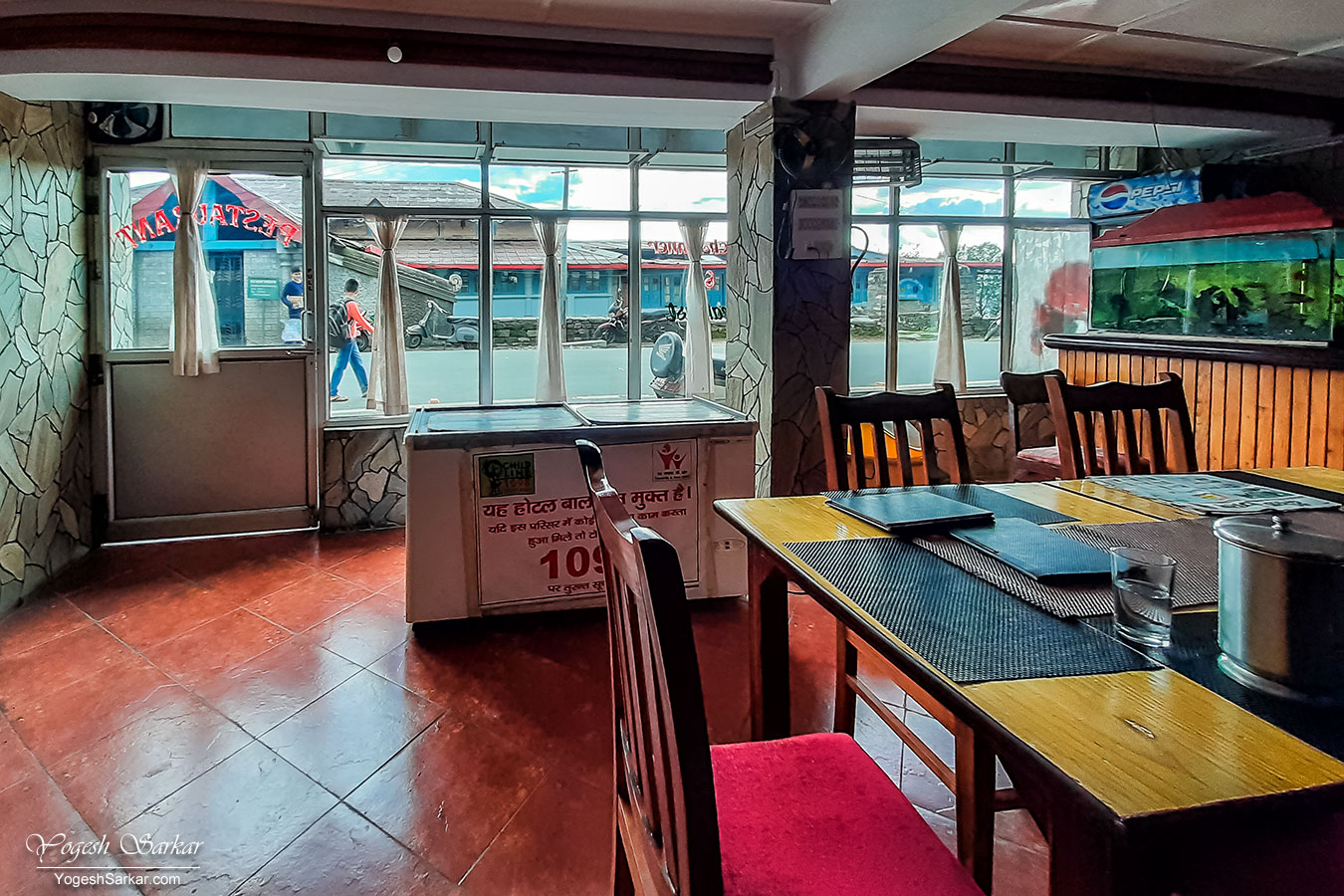 Here too, I was the only tourist and after looking at the menu, I ordered Nargisi Kofta along with chapattis. 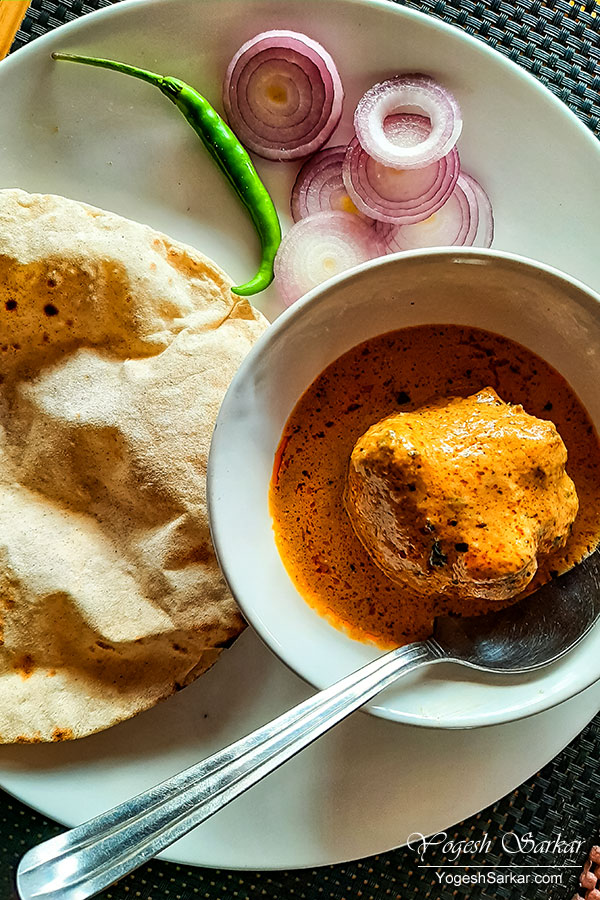 Nargisi Kofta was made of mashed cottage cheese, potato, and other fillings and provided a unique flavor, though seemed a tad salty for my taste. The lunch set me back by Rs. 246.

I spoke with the Mr. Negi who was present at the hotel, on where I could photograph the sunset and he told me of a viewpoint en route to Chaubatia Village, around 3 km away and said that would be a good point. I thanked him and started my walk towards it. 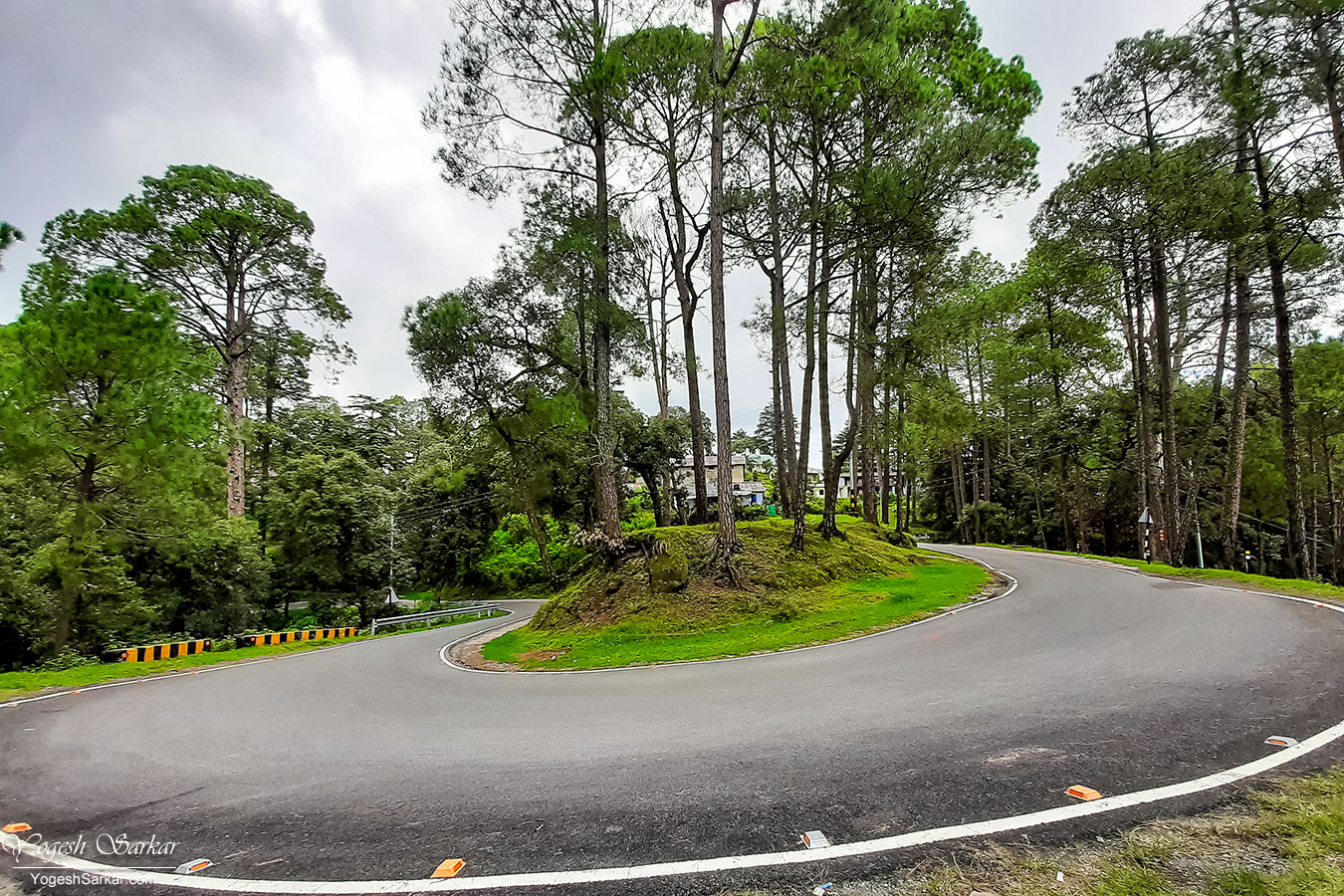 However, I was only half convinced about going there. For one, it would entail a long walk in the humid climate and two; I would be covering it tomorrow during the sightseeing tour.

Then I came across the West View Hotel and the pretty little benches in front of it. I took a photograph of it and sat down to admire the beauty of it. 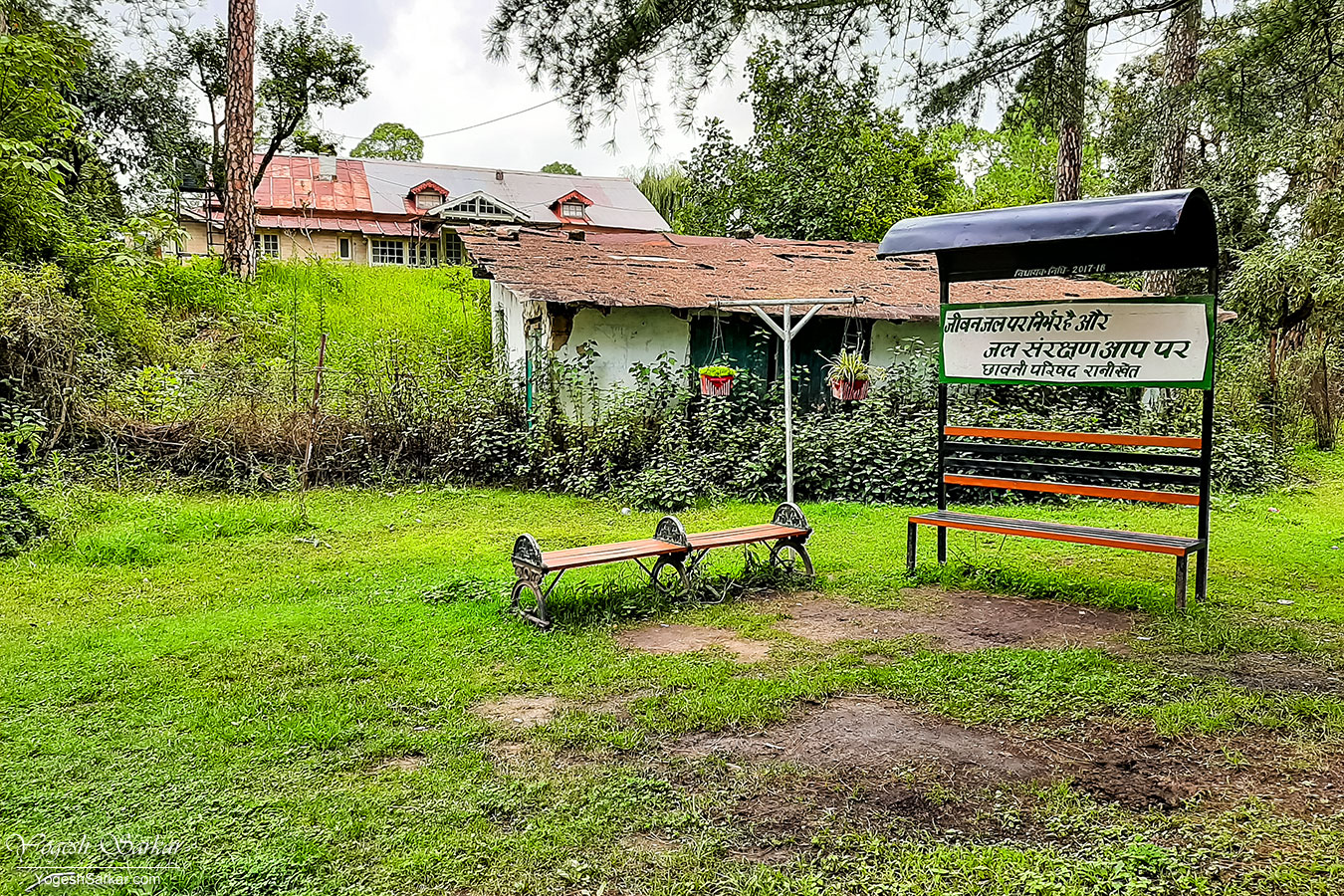 There was a walking trail next to it and I wasn’t sure how long it was, but it led to Chevron Hotel and eventually, to the Mall Road. Sitting on that pretty bench, this picturesque trail seemed like a perfect romantic walk, English Gentlemen and Ladies would have taken during their courtship, at the height of British Raj.

However, I was all alone and it seemed like a funny notion in my head to go for a romantic walk like that. Maybe the writer in my head was working overtime, but then again, that’s what it is supposed to do. Therefore, I made up my mind to go on a romantic walk, all by myself.

The trail was made up of mostly broken tarmac and thus was somewhat hard to walk on, nonetheless the serenity and nature around it, more than made up for it. 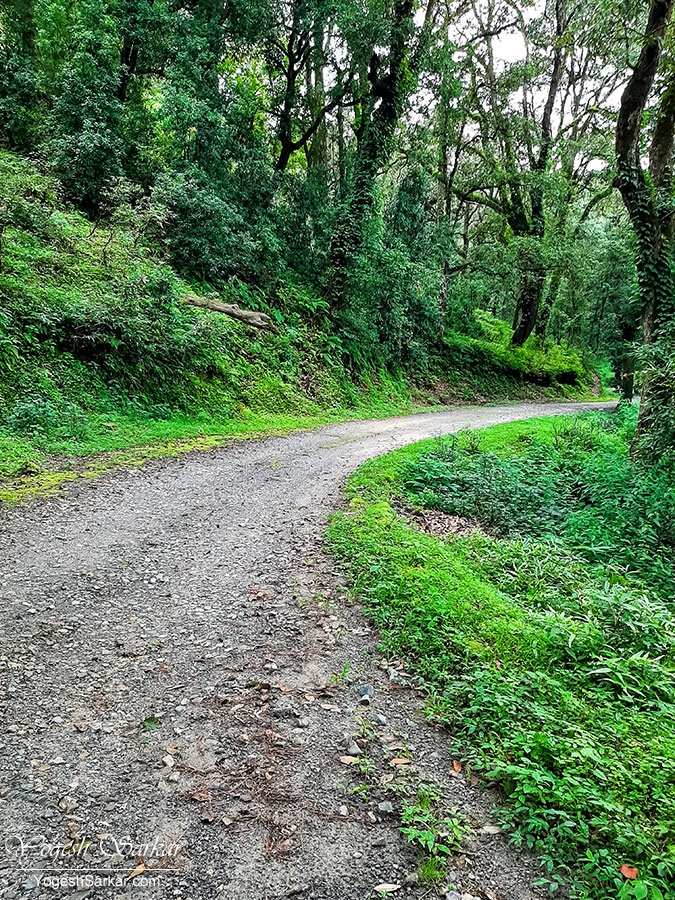 I did end up disturbing a local couple, standing next to their motorcycle, but only briefly, since within a minute I was out of sight, thanks to the winding trail.

All throughout there were paths leading up to bungalows, allotted mostly during the Raj or belonging to officials. Sadly, though, they were all locked up and I could only see a glimpse of some of them from the trail. 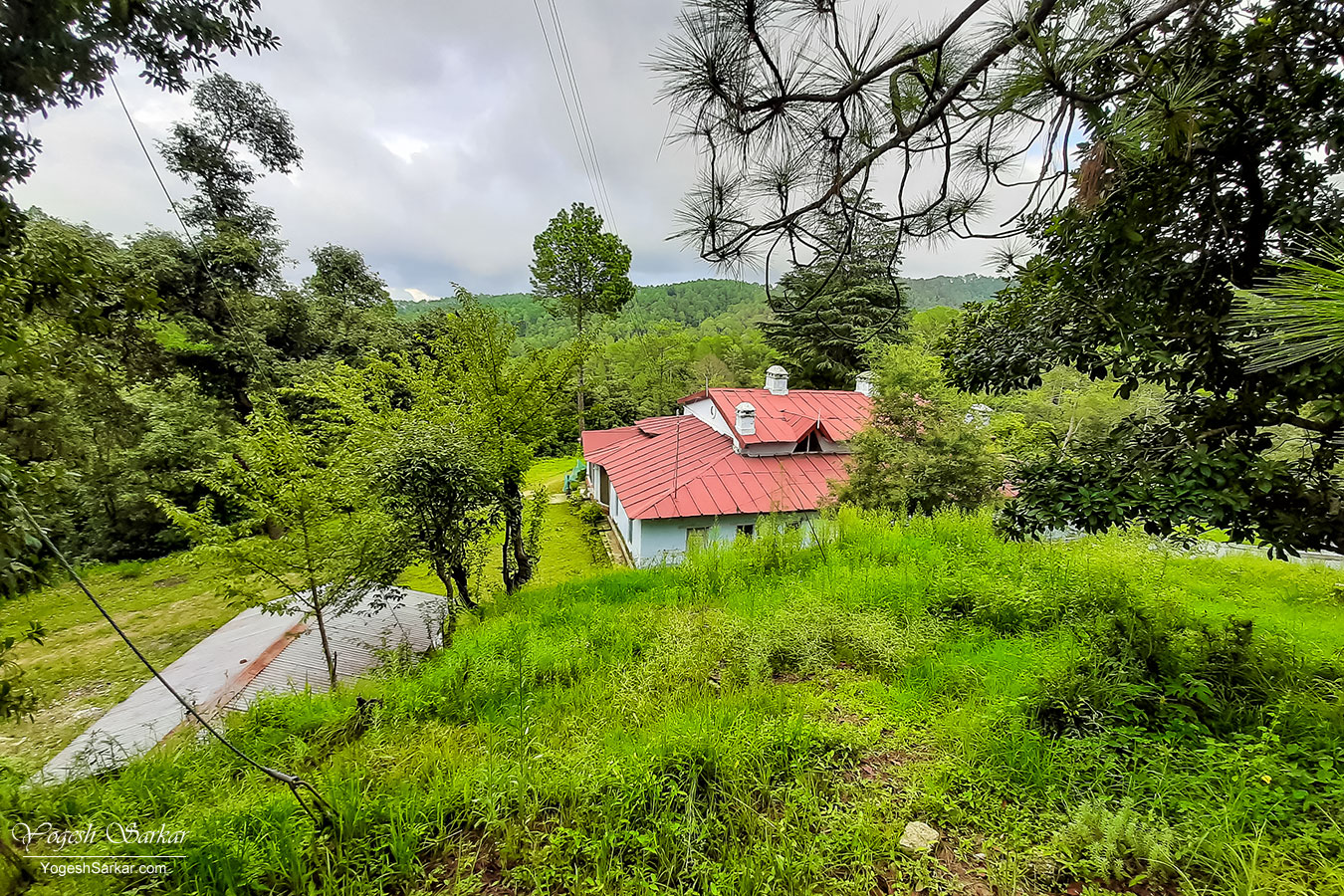 I knew they were the sort of houses, I wish to own and live in, someday. For now, they were shrouded in mystery and flora, some of it quite unique, like these rather large bunch of flowers called, Yucca Gloriosa, probably brought in by the original inhabitant of these bungalows. 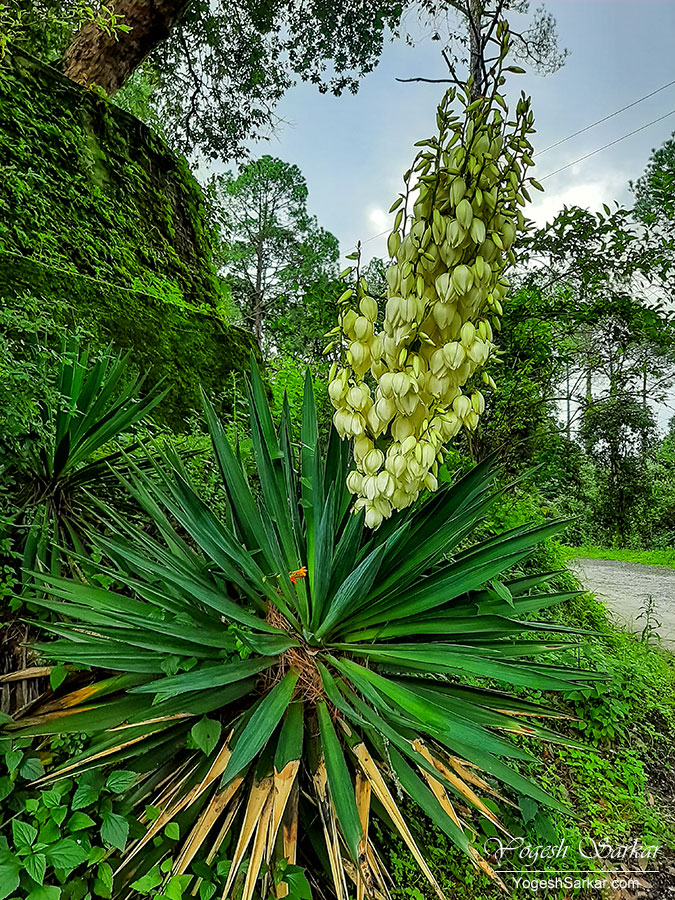 Walking was turning out to be a hard affair, thanks to the humidity and my shoes, which were killing my feet. Therefore, when I came across Chevron Hotel, having treaded a couple of kilometers on the trail, I went in, partially to check out the property and partially to quench my thirst a little and rest.

The 150-year-old property Chevron Hotel is based on turned out to be gorgeous with myriad flowers and trees growing around it and due to distance from the main road, it was a perfect hideout for anyone looking for peace and quiet. 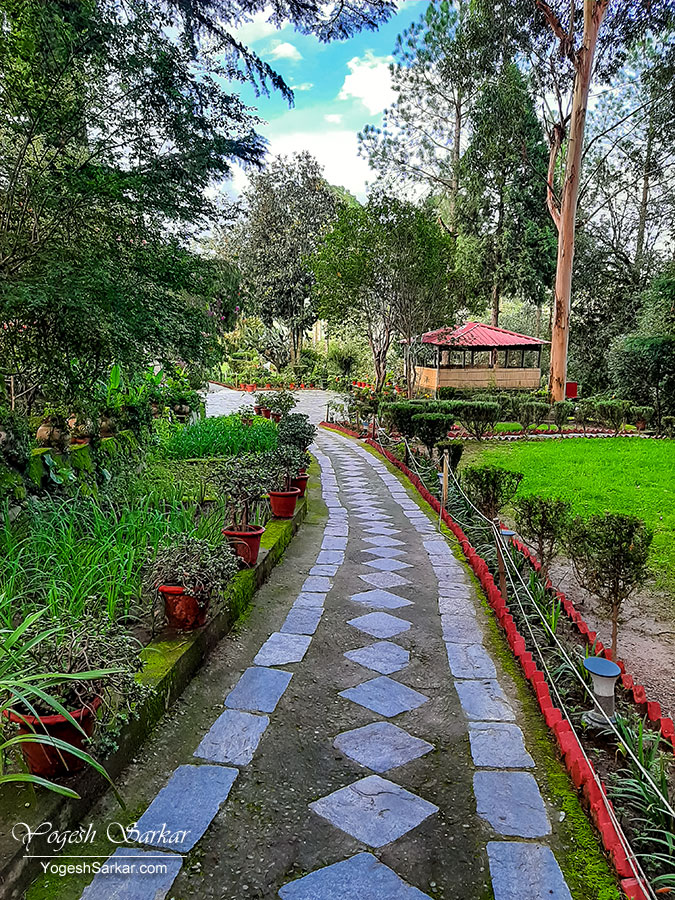 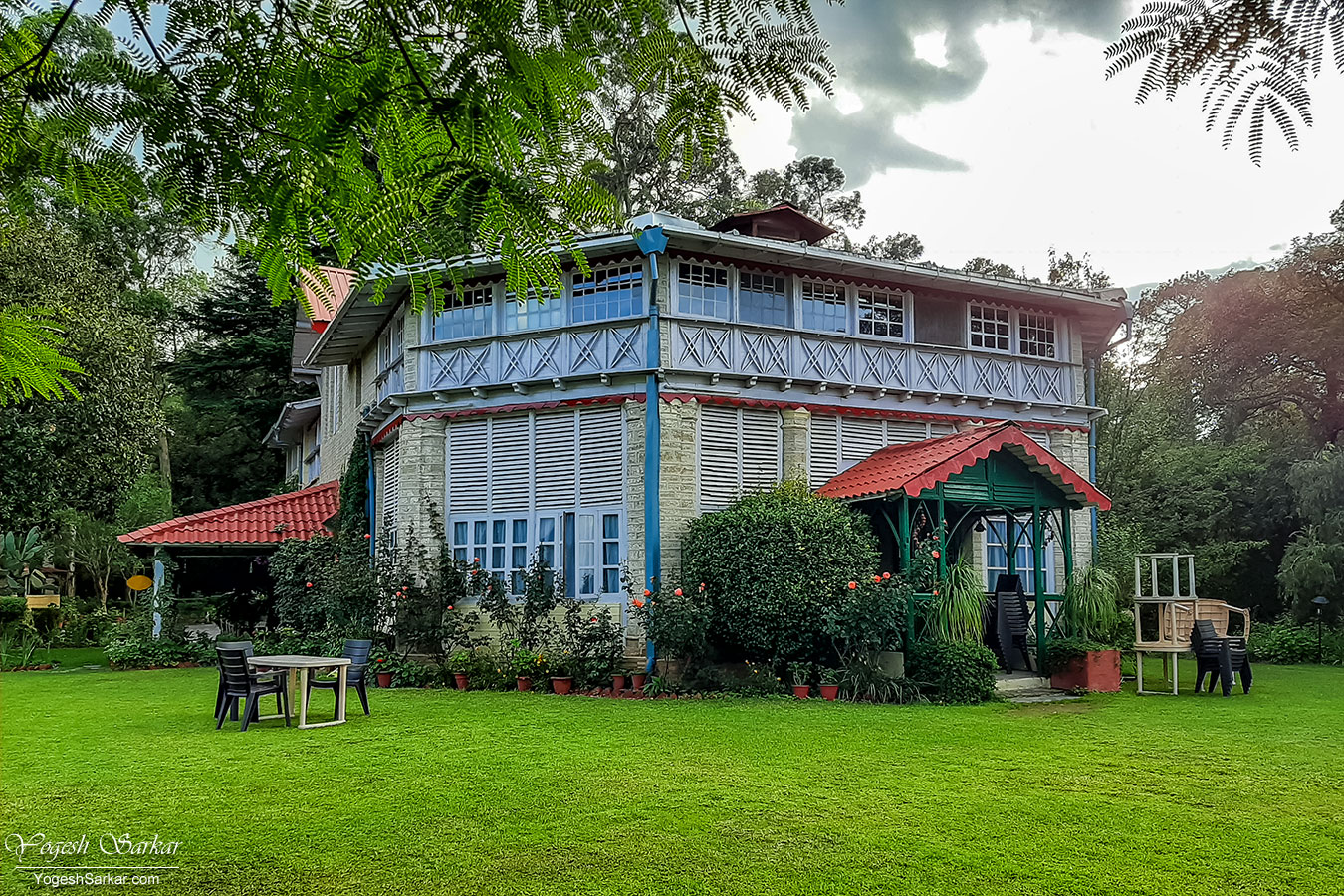 Of course, that also comes for a price, with the room rent starting at Rs. 5,000 a night. So it was out of my budget for this trip, else I was tempted to spend a night here.

Thankfully, though, drinks and food were priced well, so I ordered a homemade ginger ale for Rs. 110, while sitting in their garden restaurant. 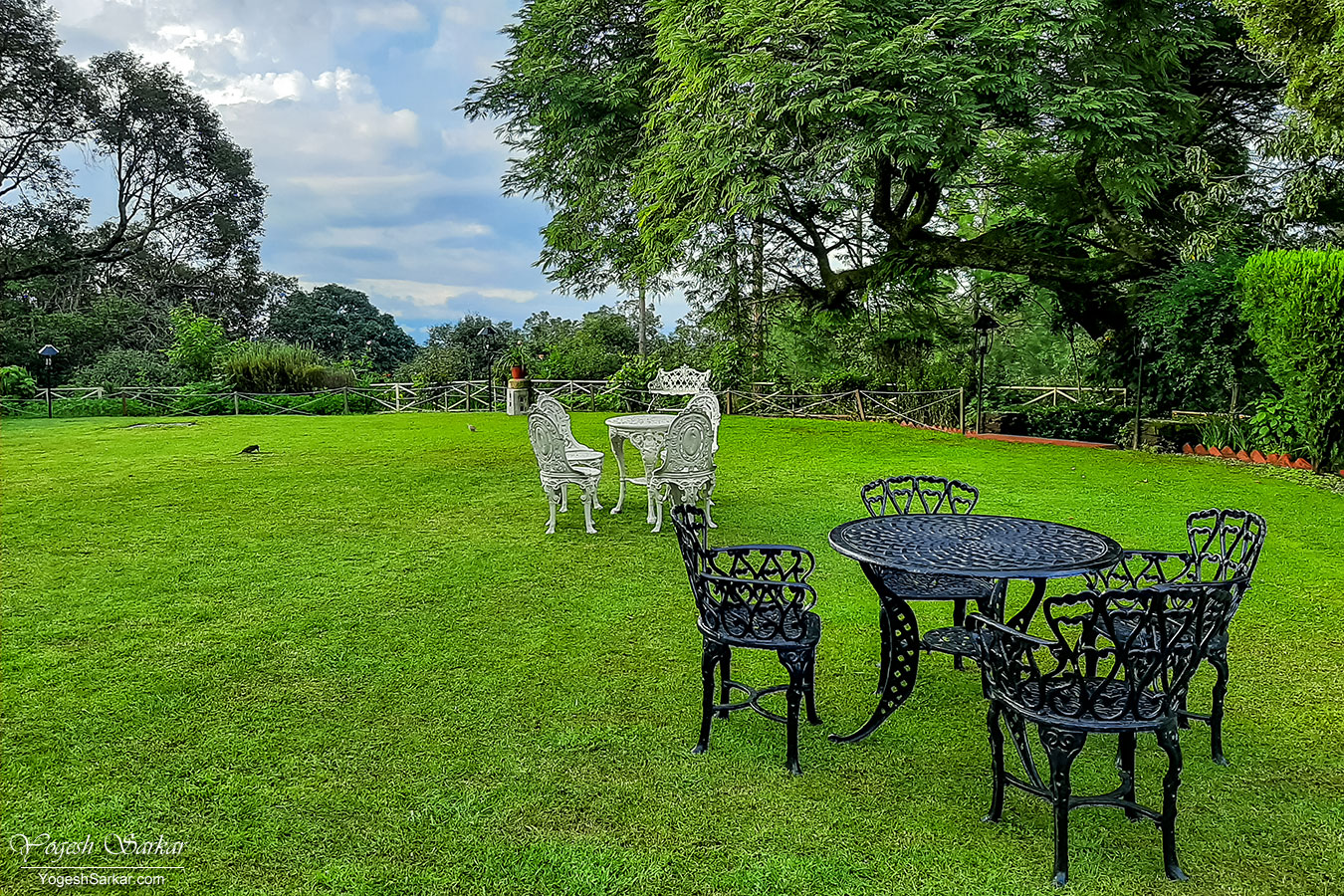 A woodpecker decided to provide me with the only company during my brief stay at Chevron, while its mate provided the background score from the woods.

After such a refreshing and sweet stop, I headed back to the trail, which slowly and steadily leads me towards the mall road. En route, I started encountering more and more residents of Ranikhet, out for evening walk.

Of course, where there is beauty, there is also beast who seek to corrupt it, it was no different here, with one of the benches having beer bottles, etc. left over to remind me of the insensitivity with which people treat nature and beauty. 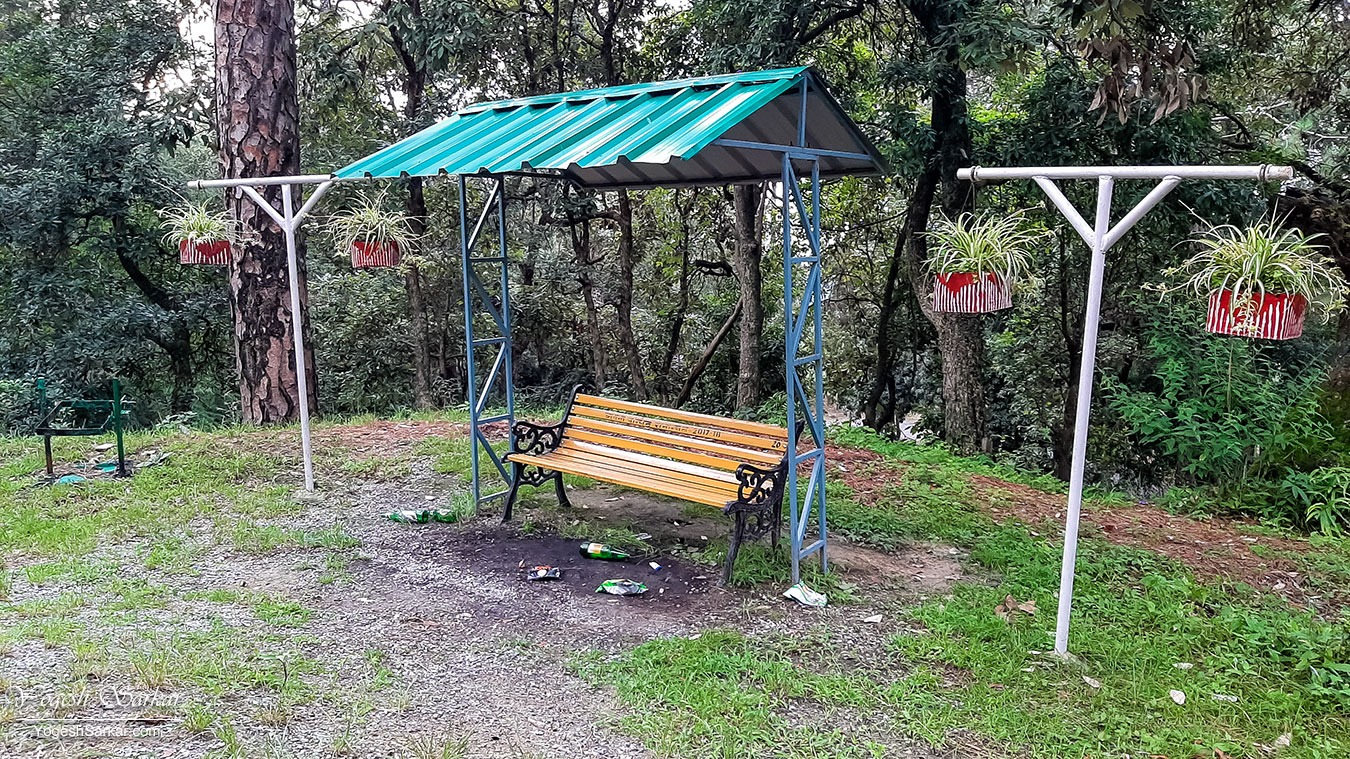 For the most part, though, it was fantastic and I managed to reach the Meghdoot Hotel, around 6:30 pm, a couple of hours after I had started on this 4 km long trail and just in time to watch the sun go down behind the clouds. 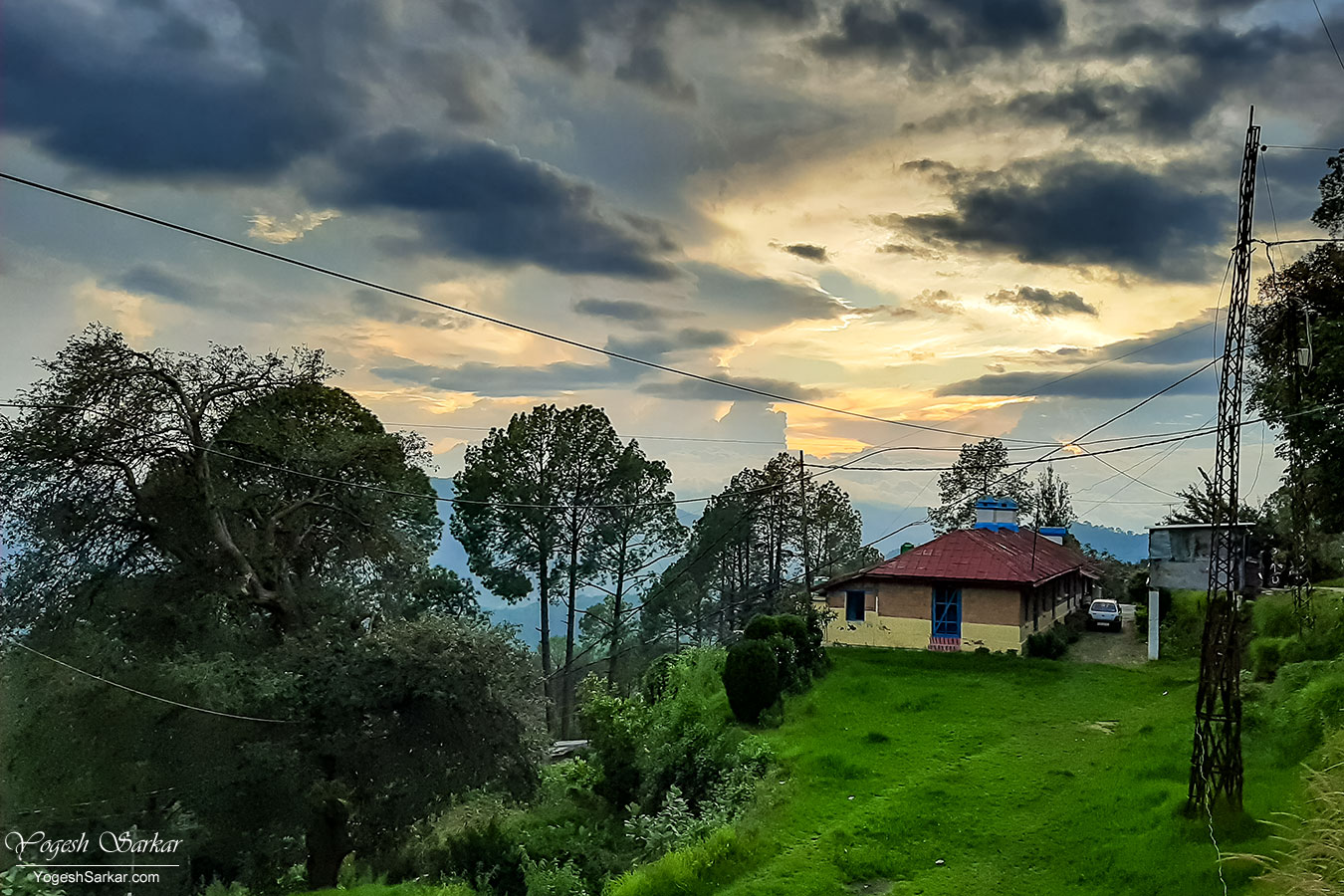 After the sunset I went back to the KMVN and Deepak, the room service server asked me what I would like to have for dinner. I, in turn, asked him for his recommendation for local flavor and he said it was Bhindi (ladyfinger), Turai (Ridge Guard) and Aloo-Gobhi (potato and cauliflower). Since I had never had turai, I told to make that.

I also confirmed the sightseeing tour with the driver at KMVN (another Lalit) and asked him to be ready, soon after breakfast in the morning.

After placing in my order for dinner and I went back to my room, changed, made a drink and sat down to write in my journal while listening to songs on my mobile phone.

Dinner was served around 8:30 pm and turai tasted almost like bhindi because it was cooked in a similar fashion with onions. Though it wasn’t as tasty as bhindi, it was good nonetheless. 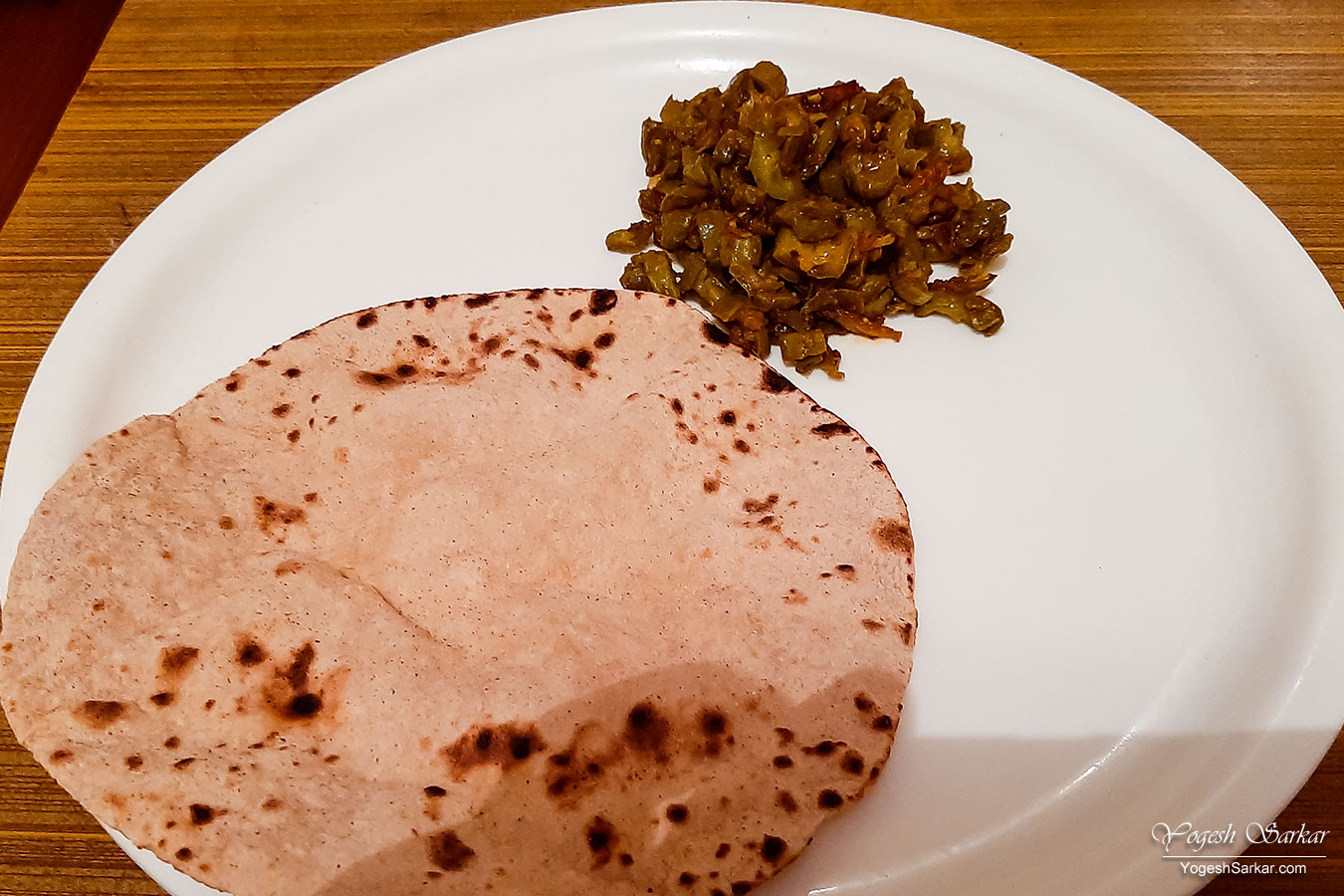 A light drizzle had begun outside and walked through it, to take a photo of the moon playing peekaboo behind the clouds and mostly to use the internet to send a few WhatsApp messages and upload images. 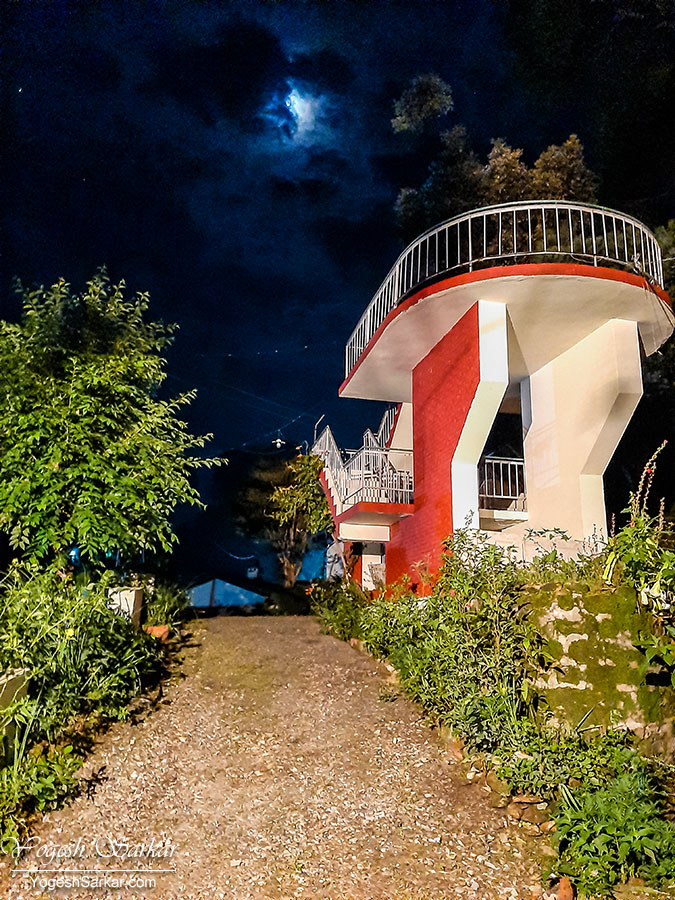 Only to wake up around an hour later and then I had a hard time falling back to sleep. Turns out, as long as I faced away from the bed, towards the window, I could breathe and sleep, but as soon as I switched sides, heaviness attacked my lungs and I could scarcely breathe.

It seemed like an onset of an asthma attack and even the inhaler had limited effect.

Add to that, hard mattress and pillows meant I could not comfortably sleep on one side throughout the night and I alternated between sleeping and sitting, waiting for the night to be over and praying, I would not get an asthma attack like the one I had in 2017, which confined me to bed for over a month!

Thanks Satinder ji. Hopefully no Ekta Kapoor this time .

Awesome.. Waiting for next part

arovarun said:
Awesome.. Waiting for next part
Click to expand...