Hi
Images and write up both are really excellent. Waiting for next part.

After a rough night, alternating between sleep and being half-awake, I fully woke up around 7:30, switched on the geyser for the bath, and went outside.

It had drizzled throughout the night and yet, more clouds loomed on the horizon. However, the sort of monsoon showers I have come to expect during monsoon season in Kumaon was sorely missing and birds seemed to be rejoicing that fact with their chirping. 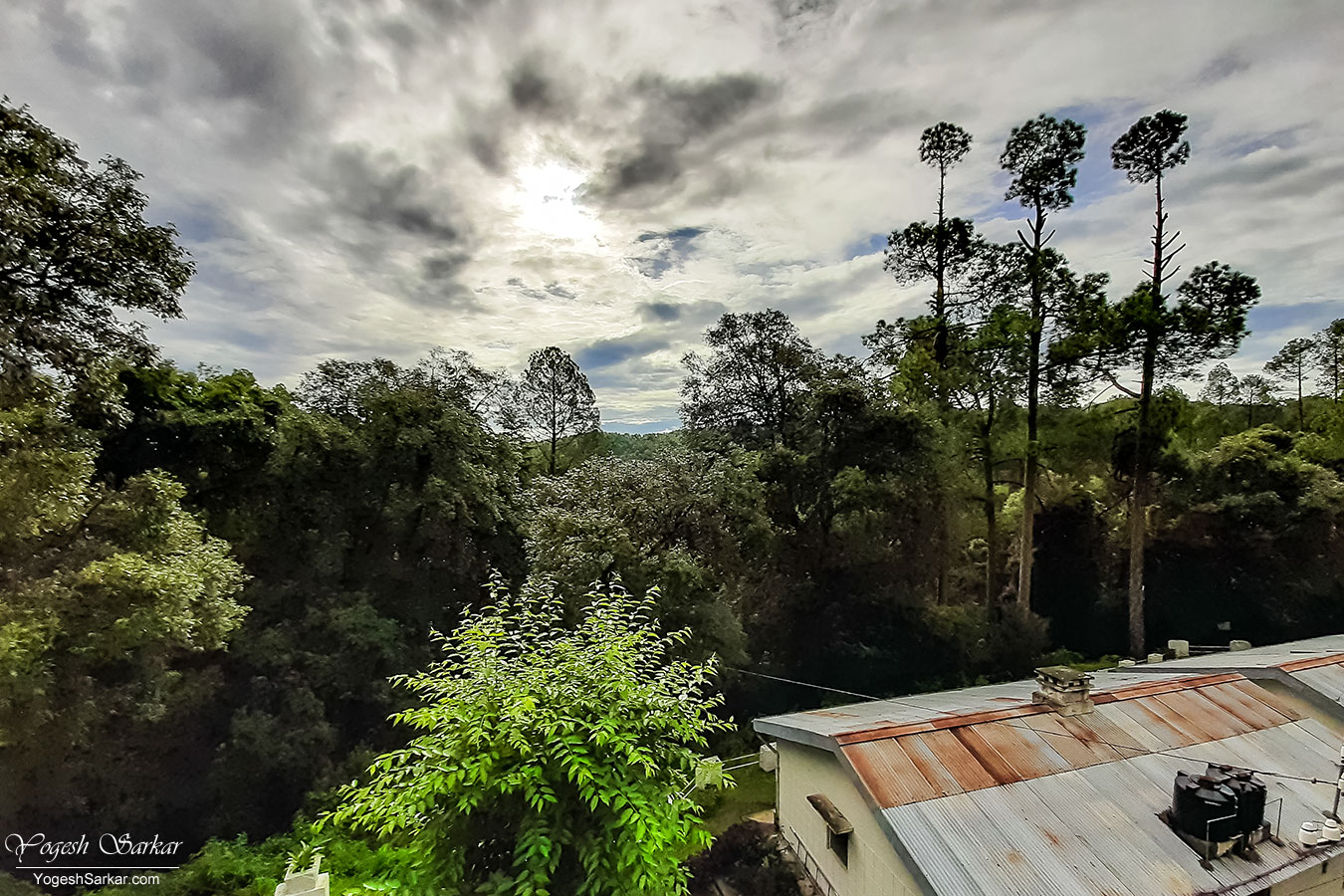 Breakfast once again consisted of aloo-paratha, curd, and tea. Afterward, I asked the staff to switch room and narrowed onto a super deluxe room, which seems to be getting a good amount of sunshine. 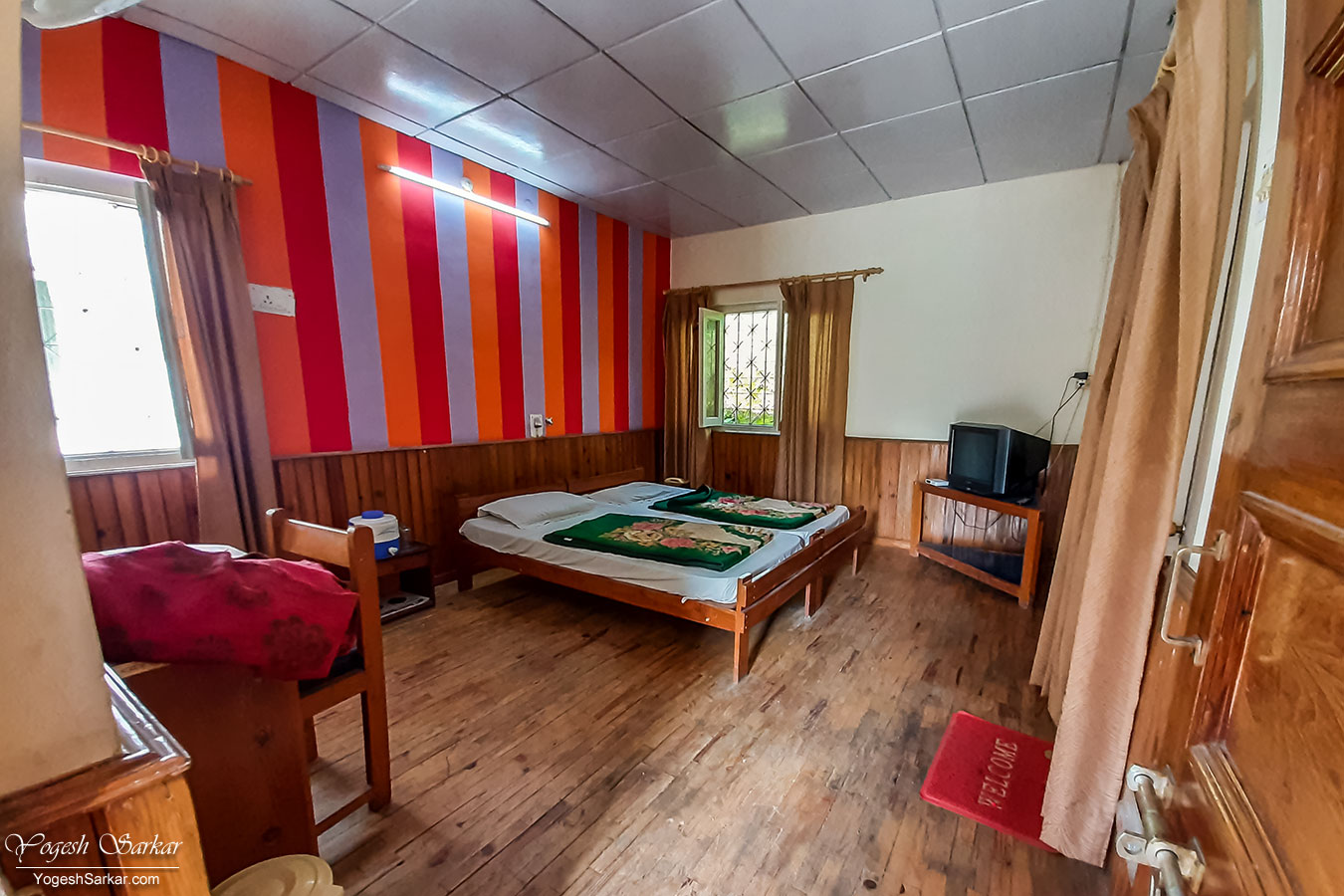 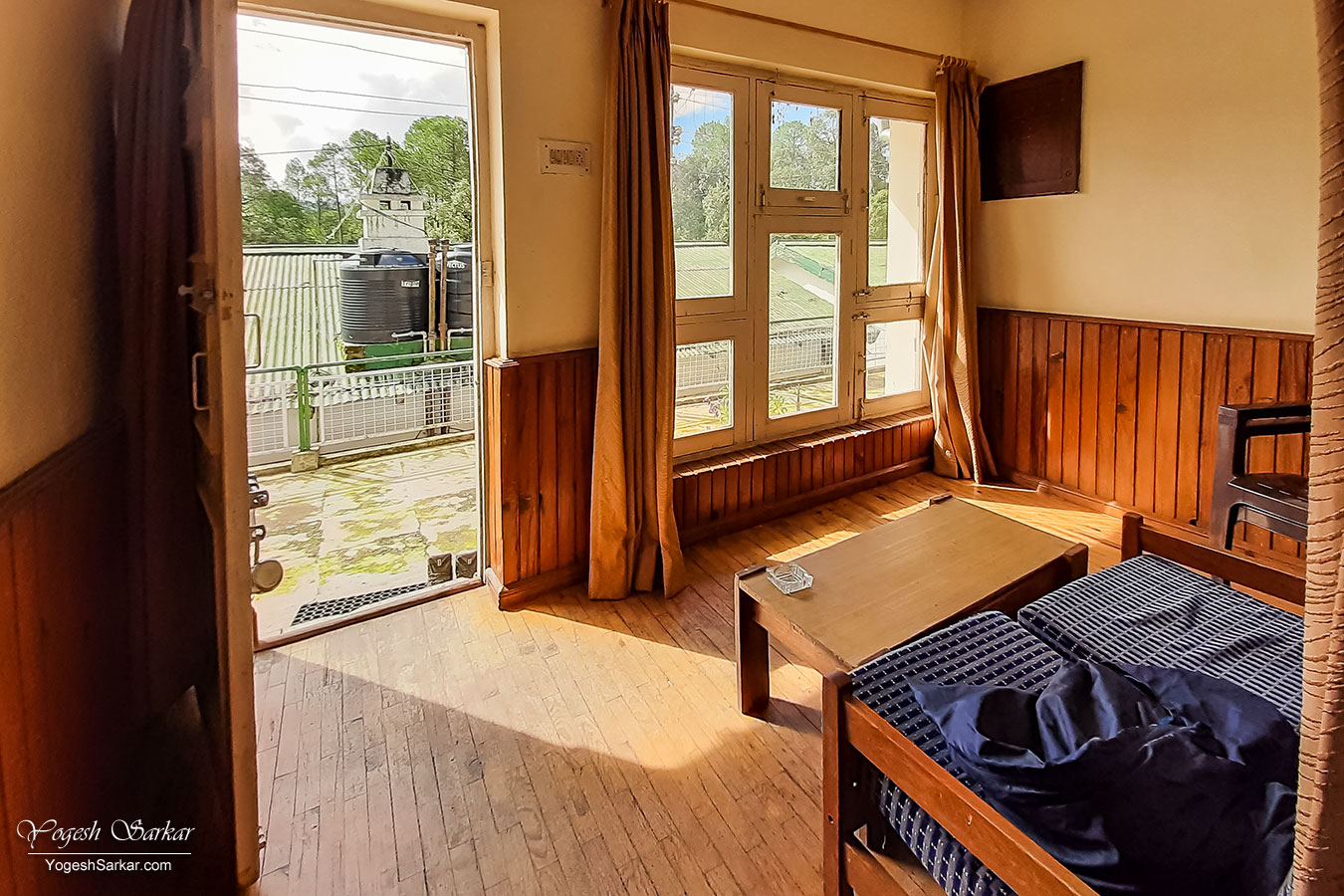 After hauling up my luggage to this room, which was above the reception, yet still had no access to Wi-Fi, I met Lalit the disinterested taxi driver, hopped into his Wagon R and we headed towards the Jhula Devi Temple.

Jhula Devi Temple was around a kilometer from KMVN and looked anything but ordinary even from the outside, with numerous bells of all sizes adorning its façade and even inside. 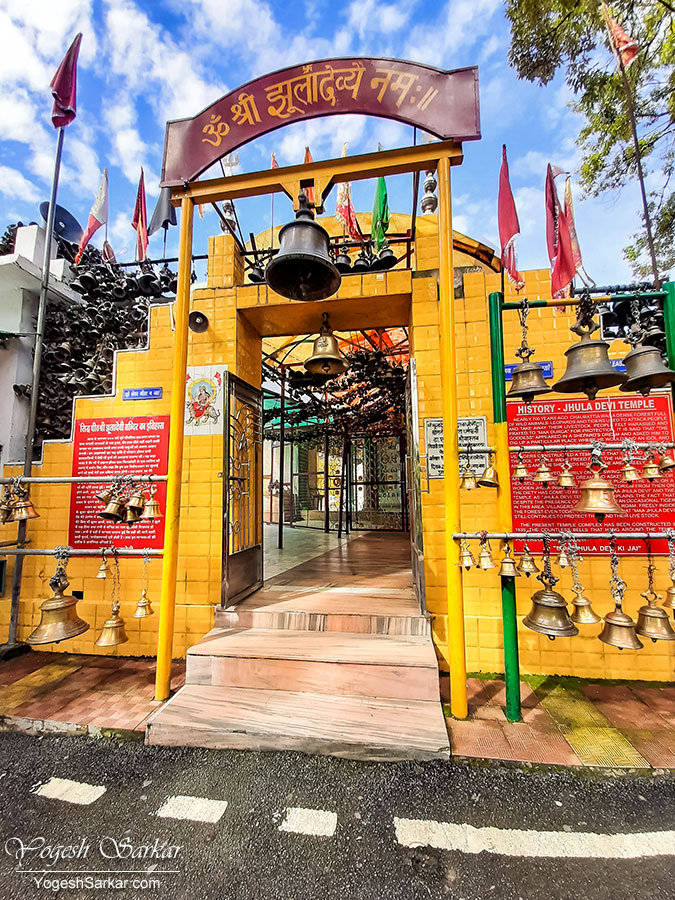 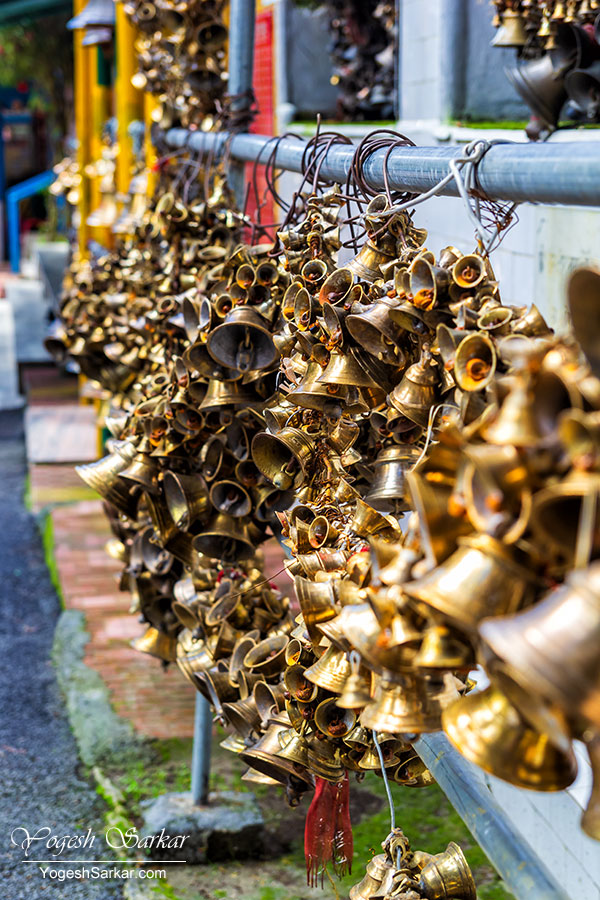 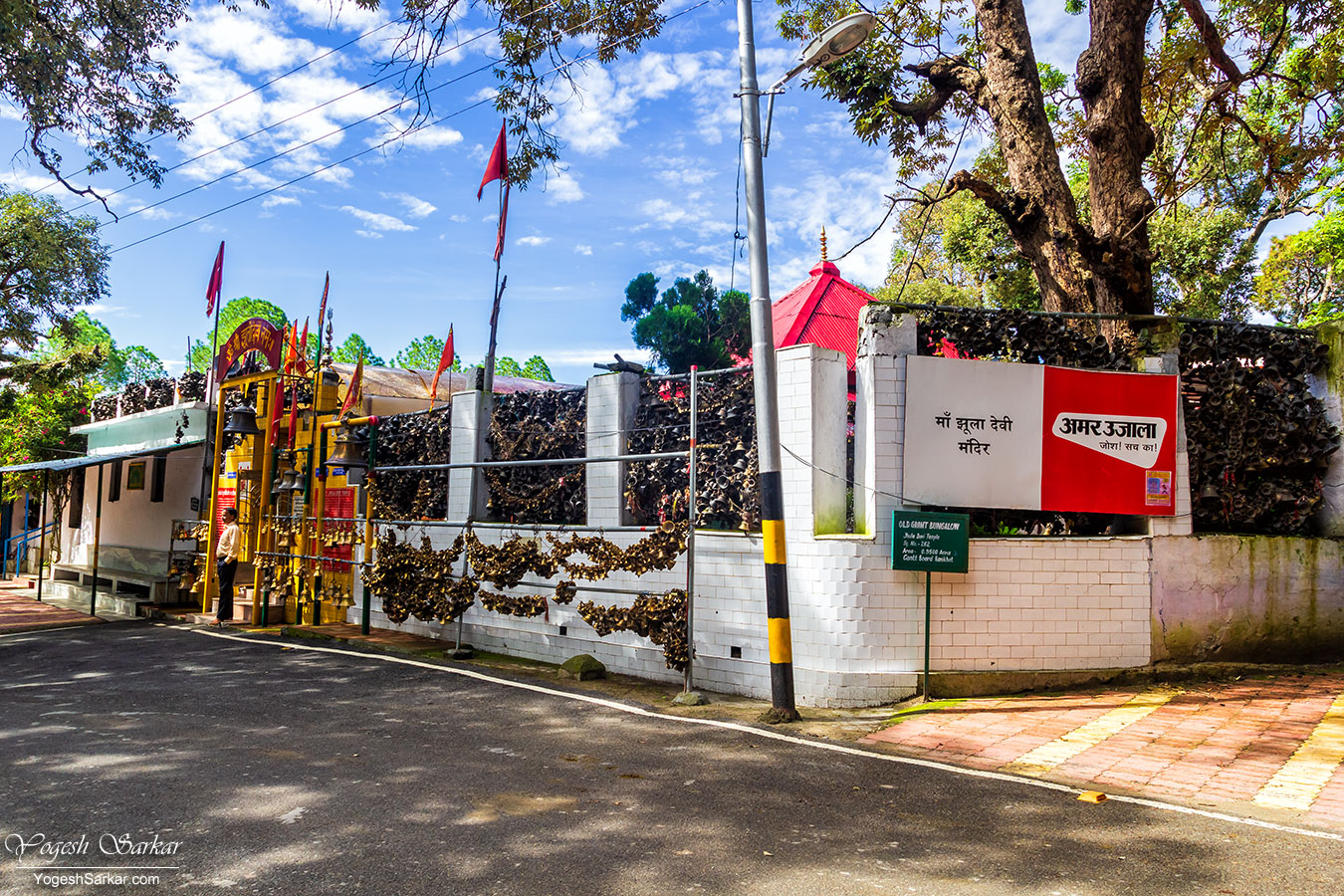 Built-in the 8th Century and then rebuilt in 1935, the Jhula Devi Temple is devoted to Goddess Durga and there is a Shiv temple in the complex as well. However, no photography is allowed inside the temple, so I had to contend with exploring the temple, praying a little and getting prashad from the Pandit Ji.

After visiting the temple, it was time to head to the Chaubatia Village, by taking the road going to the right. After a couple of kilometers, we reached the famed viewpoint, which was nothing except a turn with a small clearing with good enough views. However, no mountain range could be seen, due to cloud cover. Nevertheless, it made for a few good photographs, though I do not think it would have been worth the effort to come here yesterday evening for sunset photography. 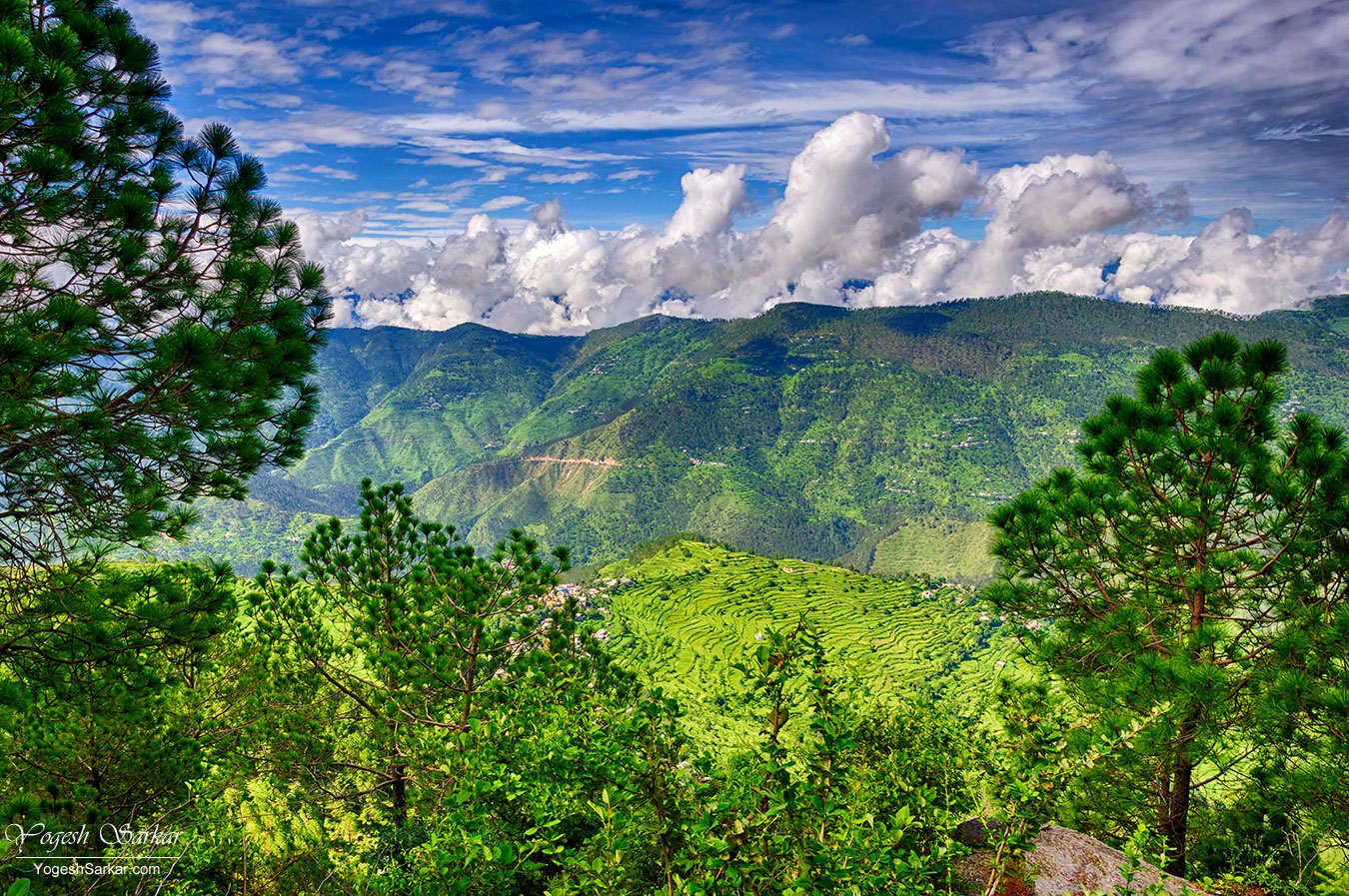 Next up was the government-run Apple Garden, which according to my taxi driver was a sheer waste of resources, especially since the American apples were planted there and they were not any good. As per him, the government should give them to farmers, who can grow vegetables there and was hopeful, Modi would make that happen.

Like a typical taxi driver, who wants to get done with his work as soon as possible and get paid, he asked me, once we reached the garden if I actually wanted to go and have a look or head back?

I told him to wait and went inside the garden, ignoring the calls of guides, who wanted to charge Rs. 200 for showing me around there.

The garden itself turned out to be vast, however, most of it was barricaded and the views generally spoilt by the barricades. Still, it was a nice walk and though the clouds were on the horizon and a monkey on the tree, I took some photographs and more than that, enjoyed the walk through it. However, I failed to see the need for paying Rs. 200 to a guide, for such a short tour, unless they lead you to another, longer path. 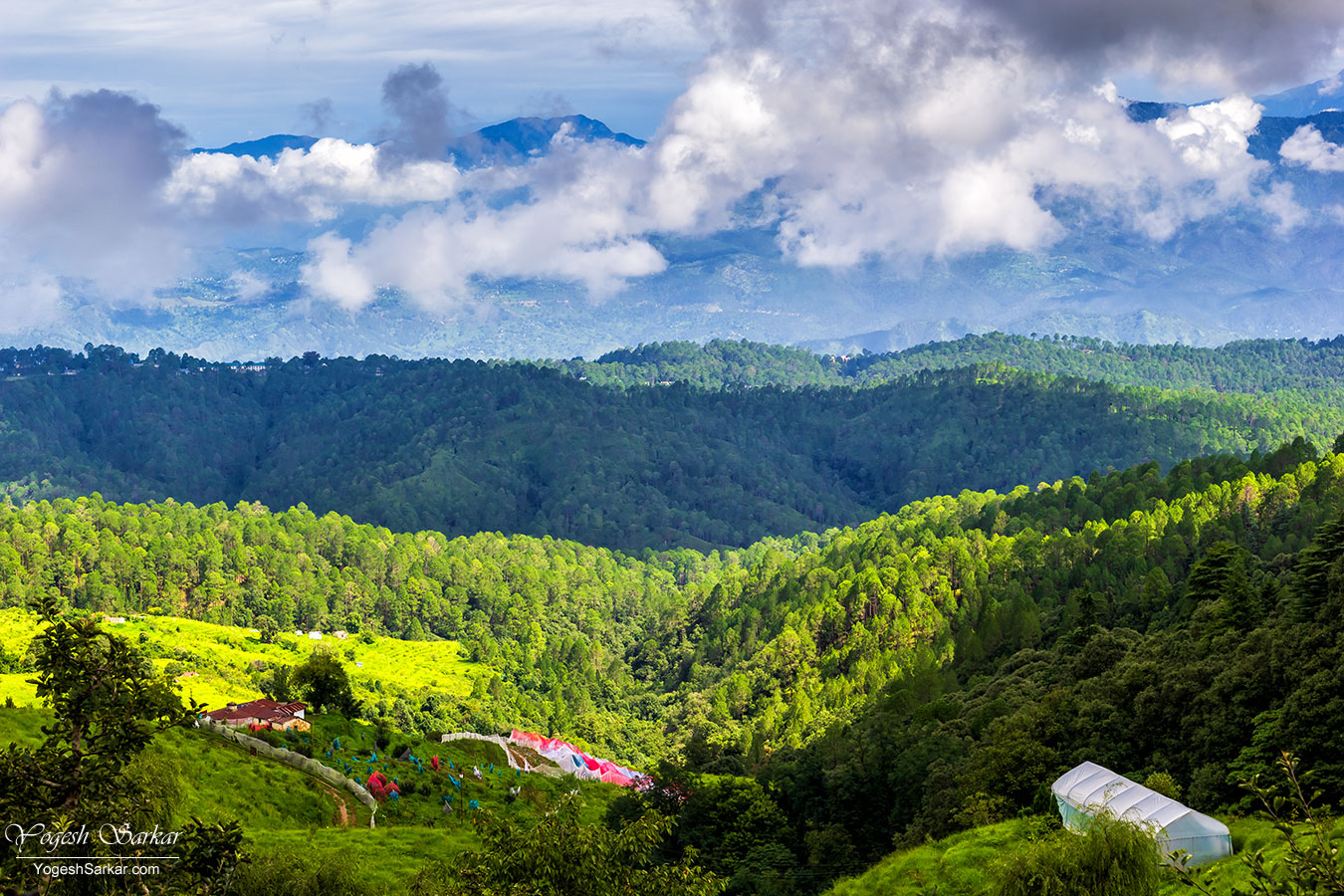 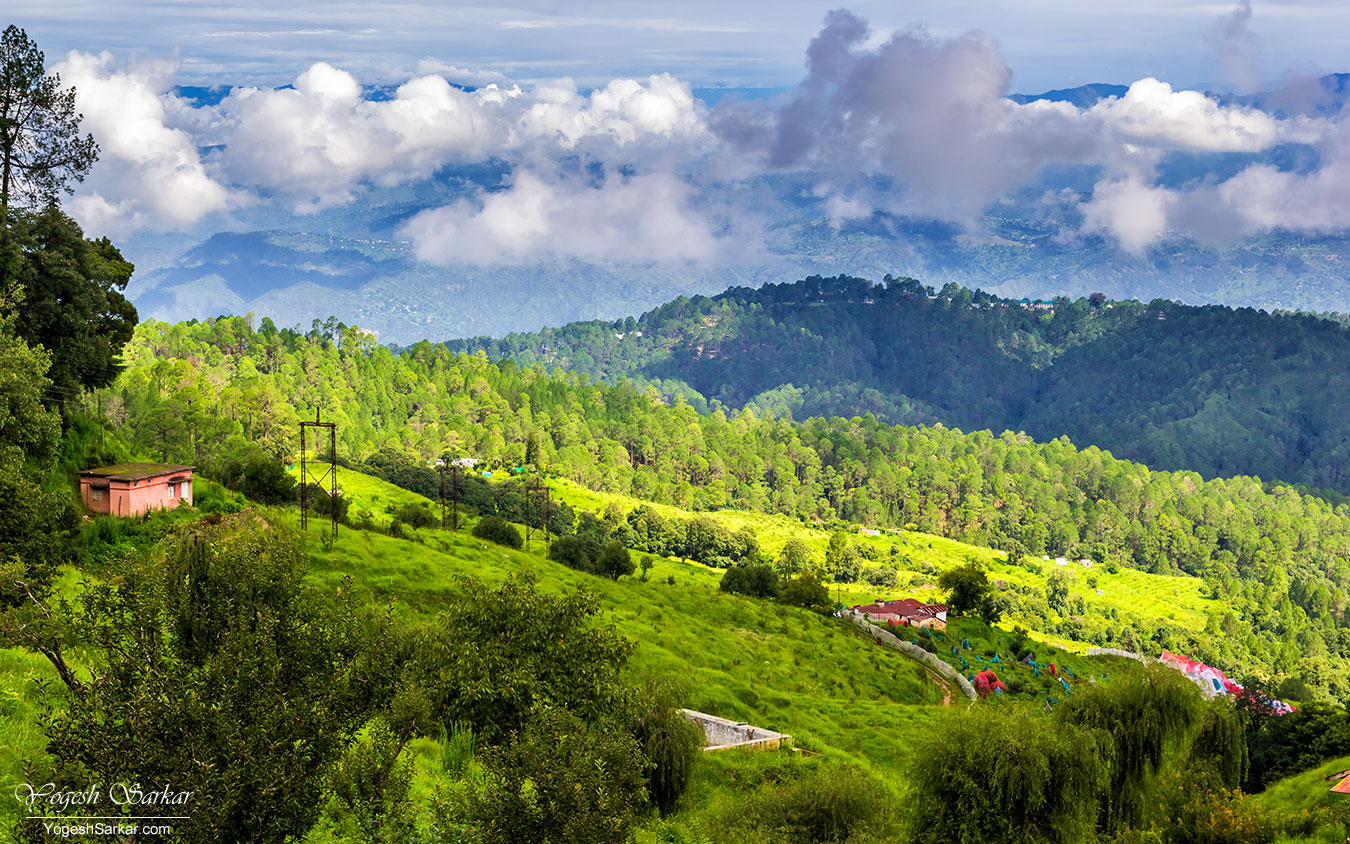 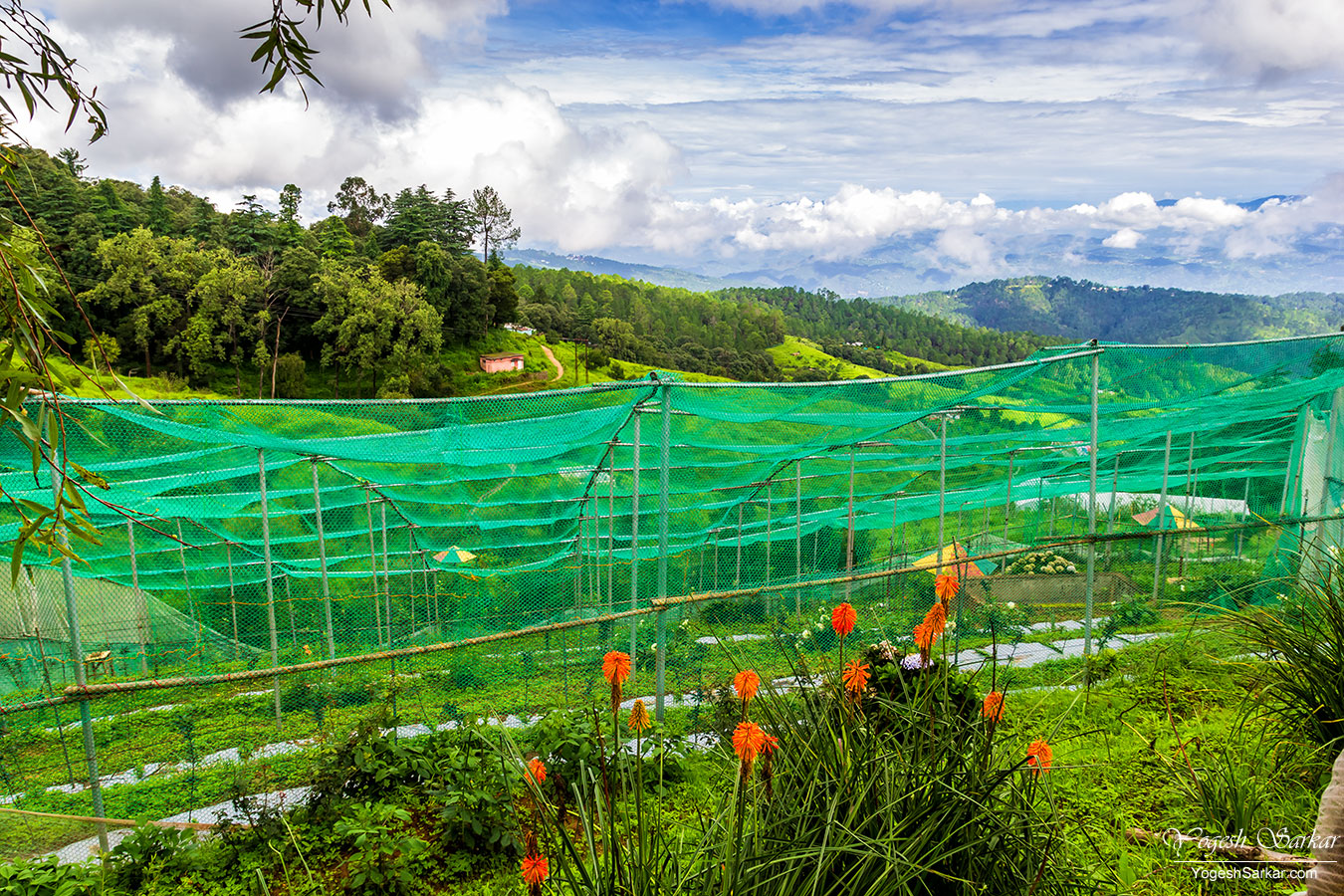 Once back in the parking lot, I hopped back into the Wagon R and we drove towards the KRC Woollen Factory.

It turned out to be an old Church, which had been converted into a Woollen Factory and store, by the Kumaon Regiment, for the benefit of retired soldiers and their dependents. 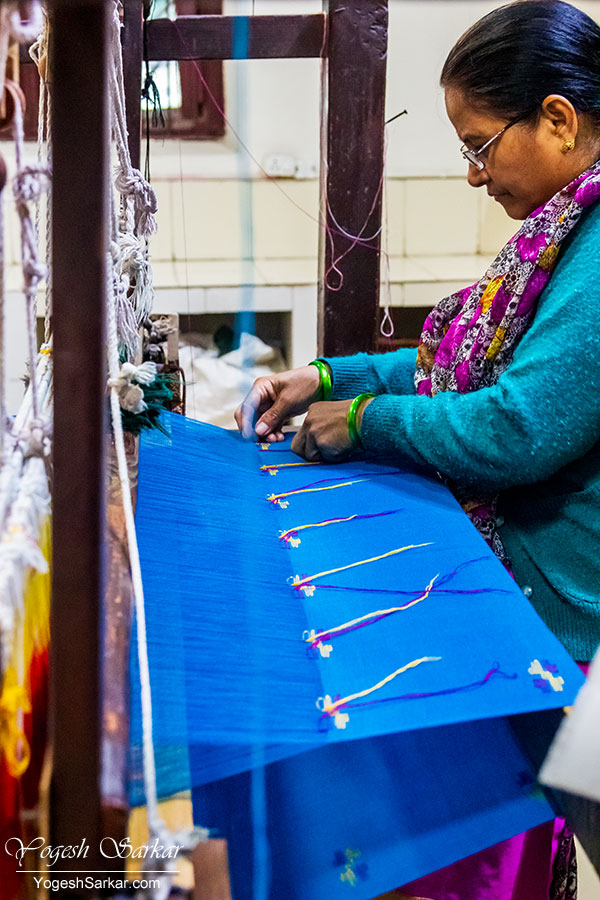 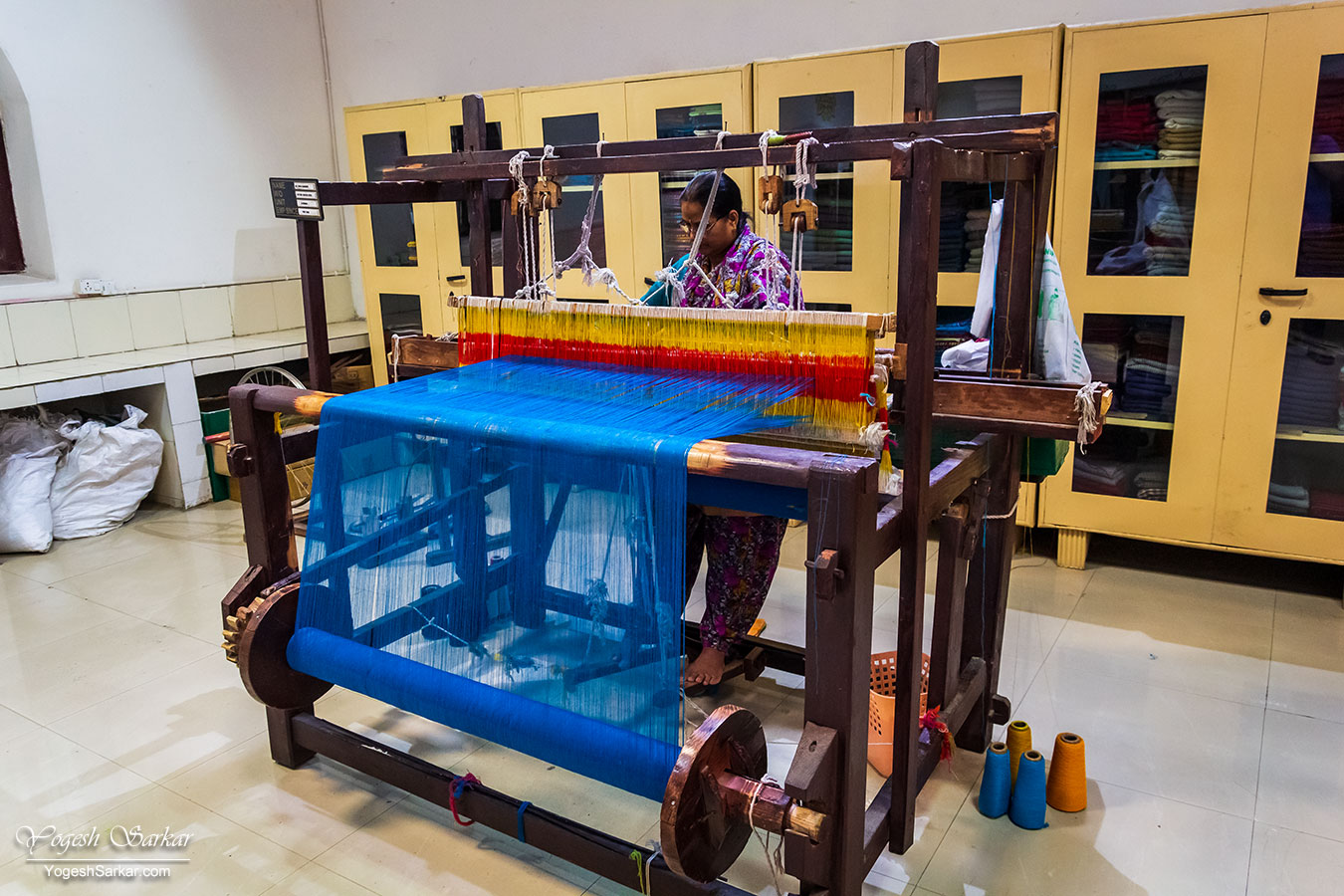 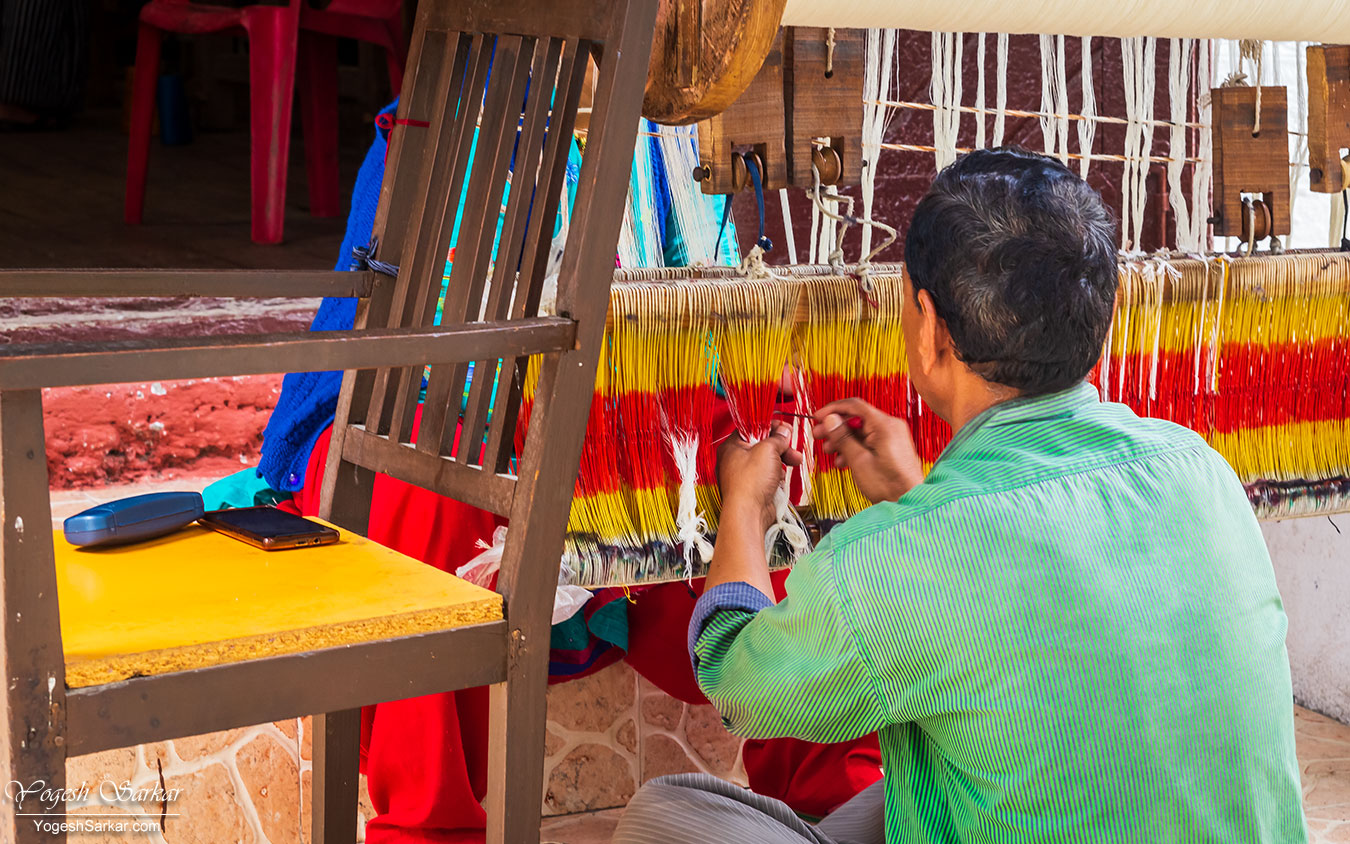 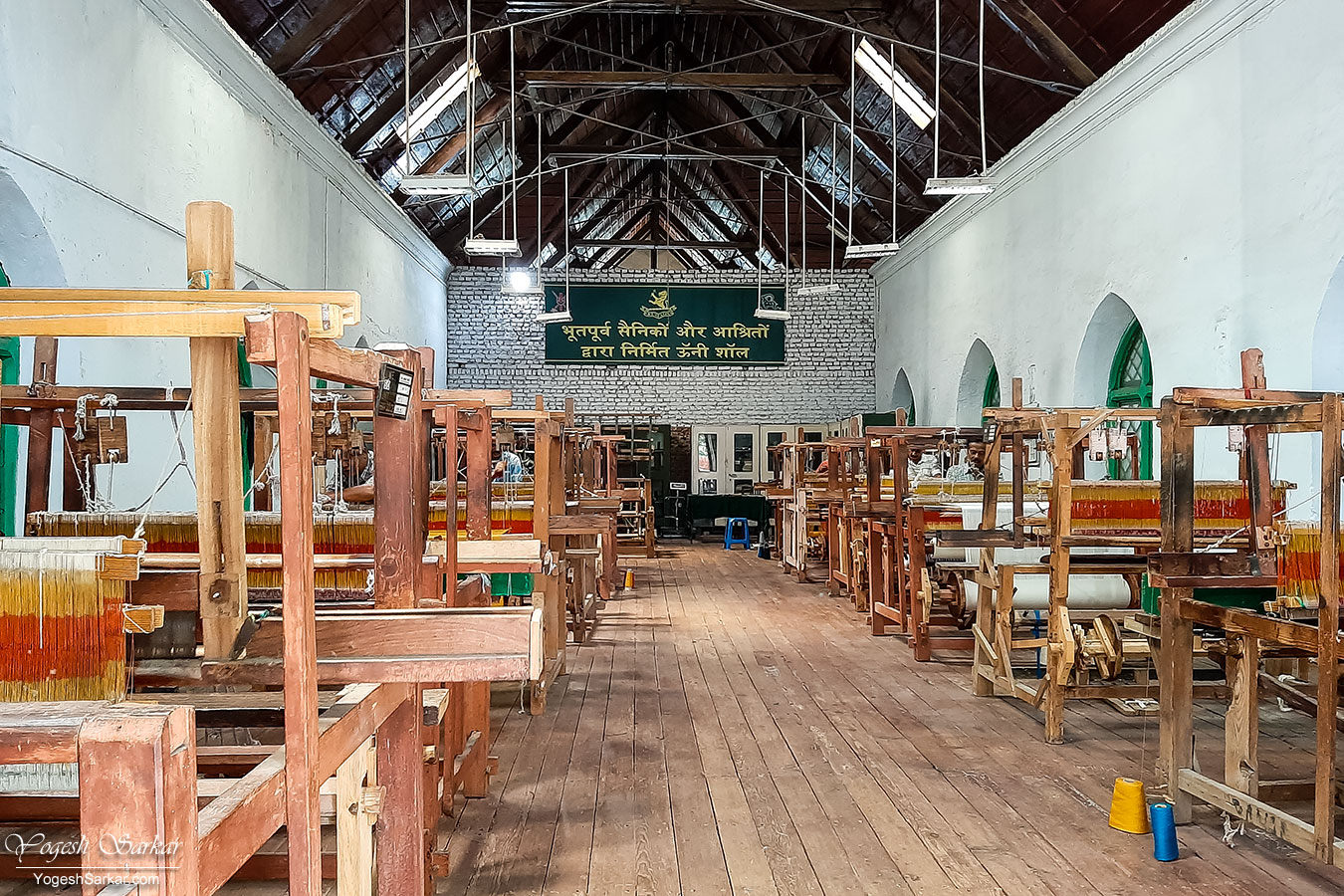 I had mixed feelings about it. On the one hand, the old Church would likely be taken care off by this initiative and it was for good cause. On the other hand, a historical monument deserved better treatment than this and I could not help but wonder, how beautiful it would look if it were restored as a church again. 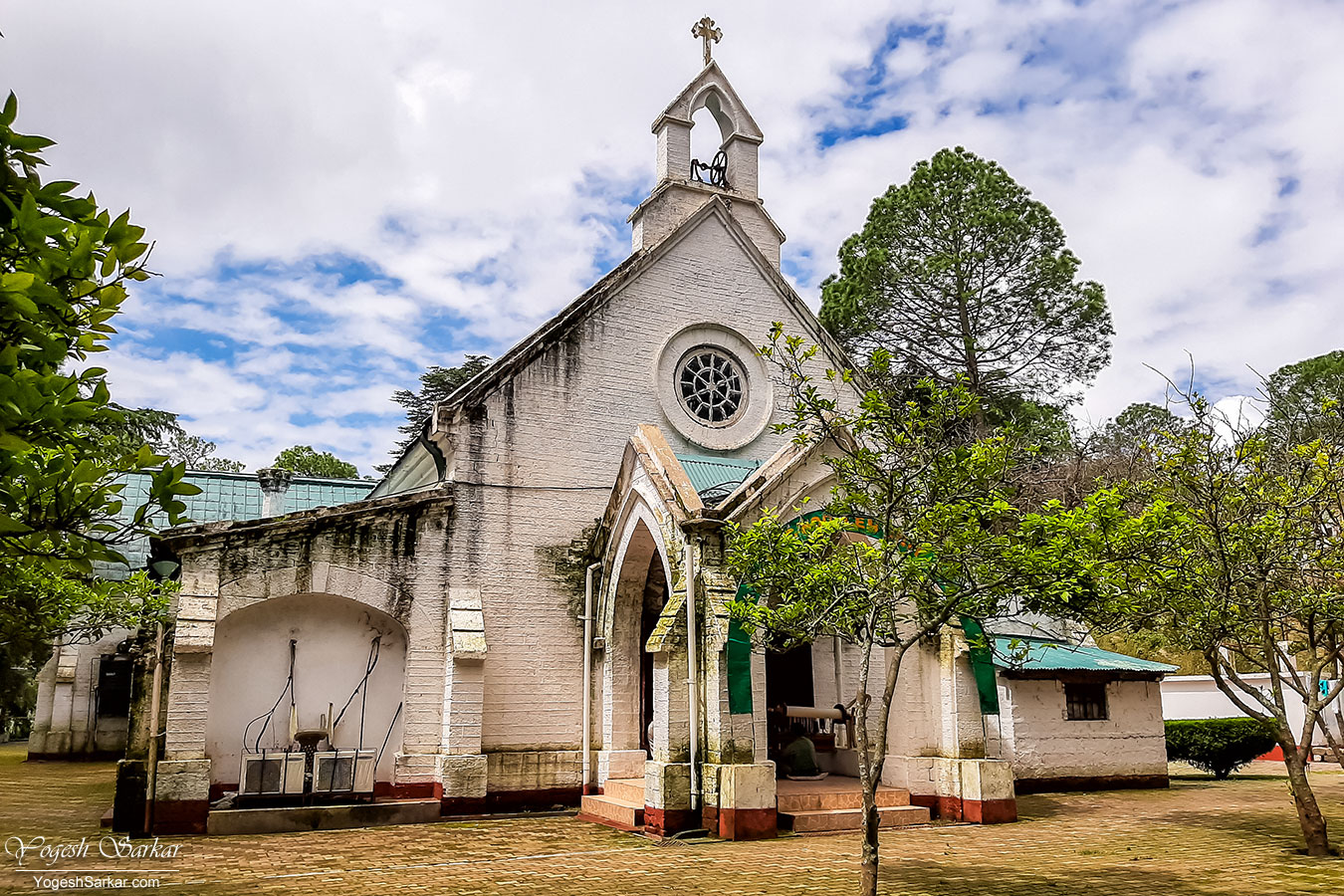 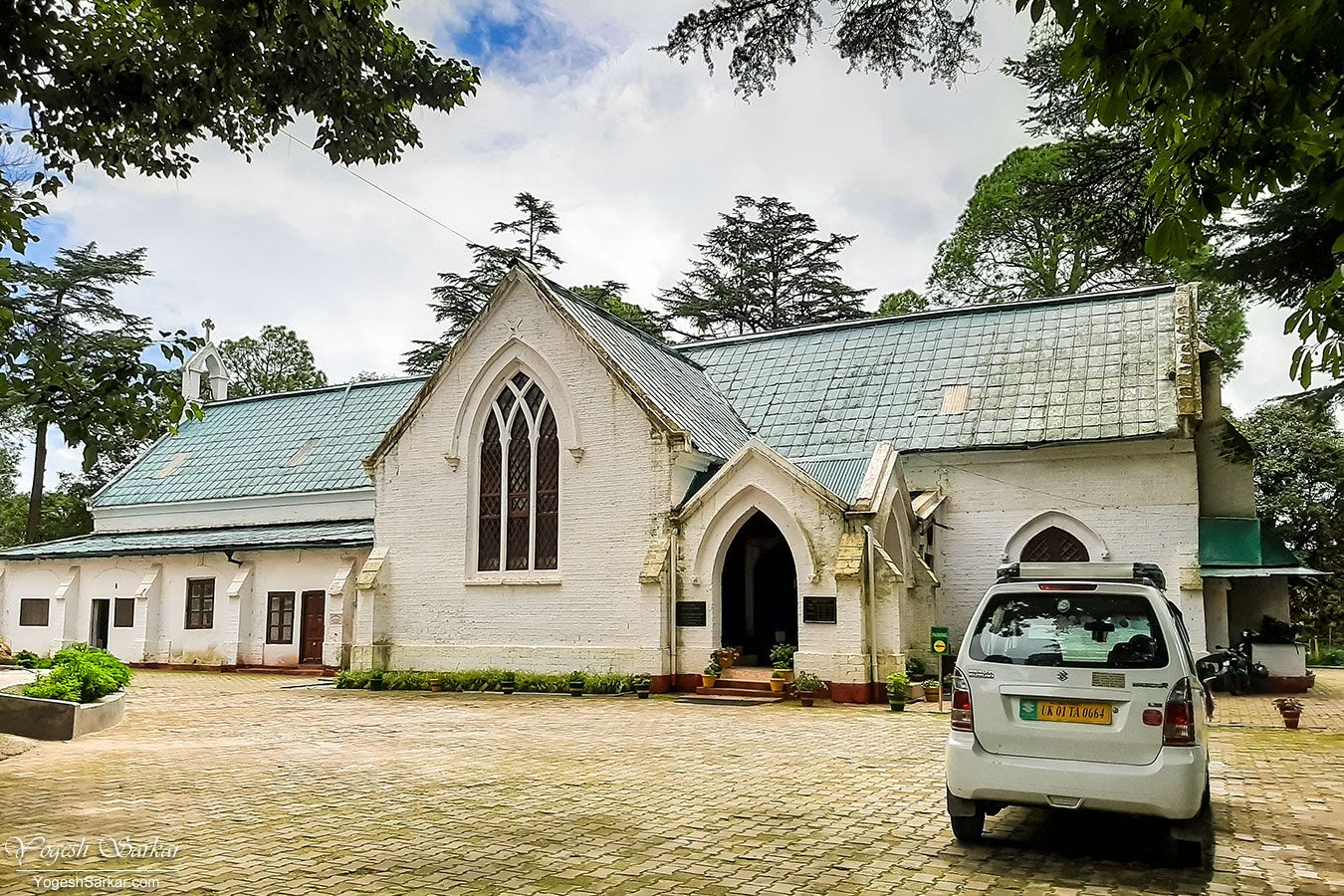 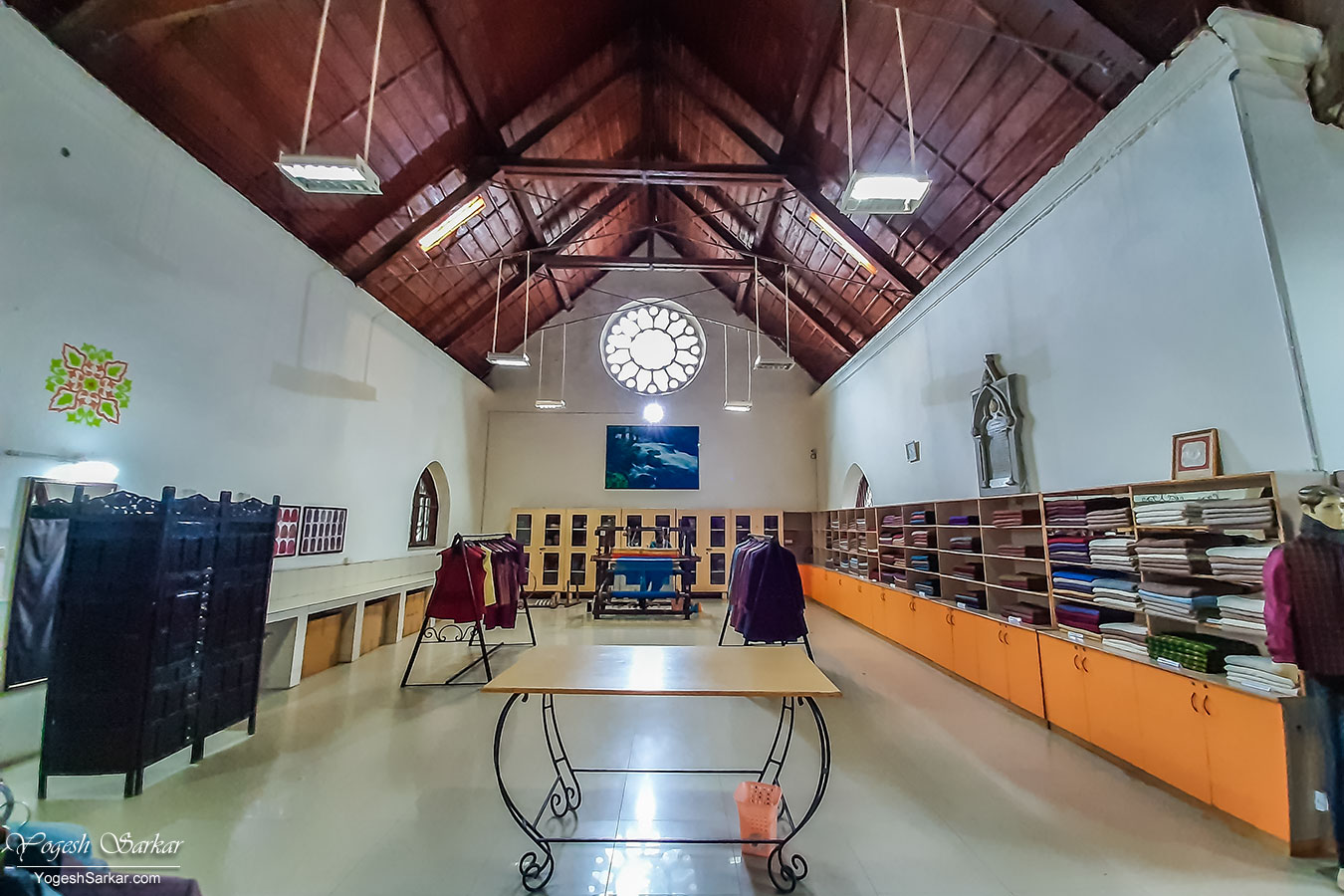 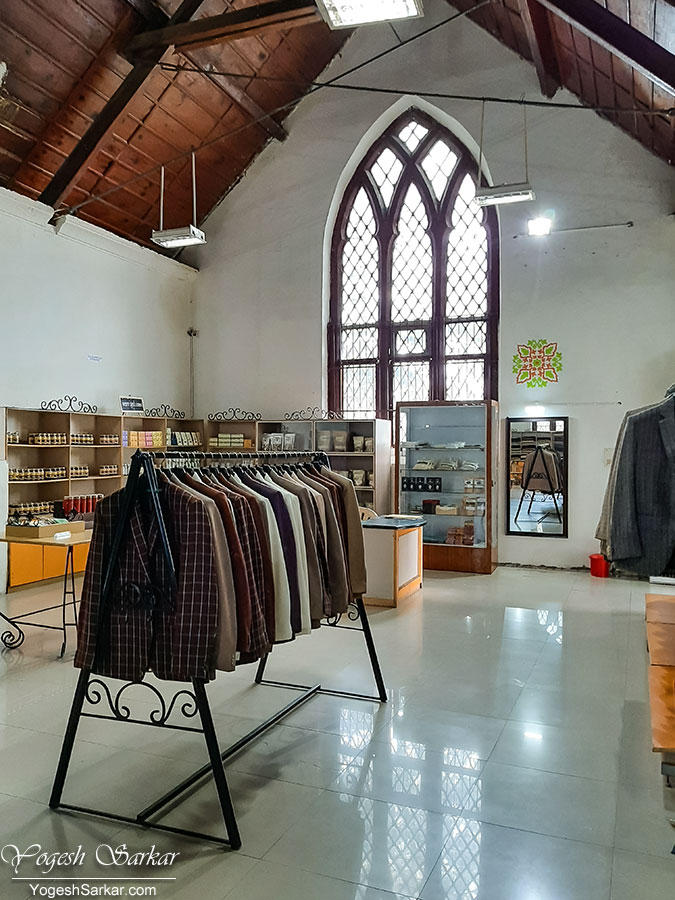 After the Church, it was time to drive to the Kumaon Regimental Museum, located near the center of Ranikhet, in the cantonment area.

There was a memorial dedicated to the braves of Kumaon Regiment, next to the museum and I went there first and after asking the soldier present there, I took a few photographs of it. 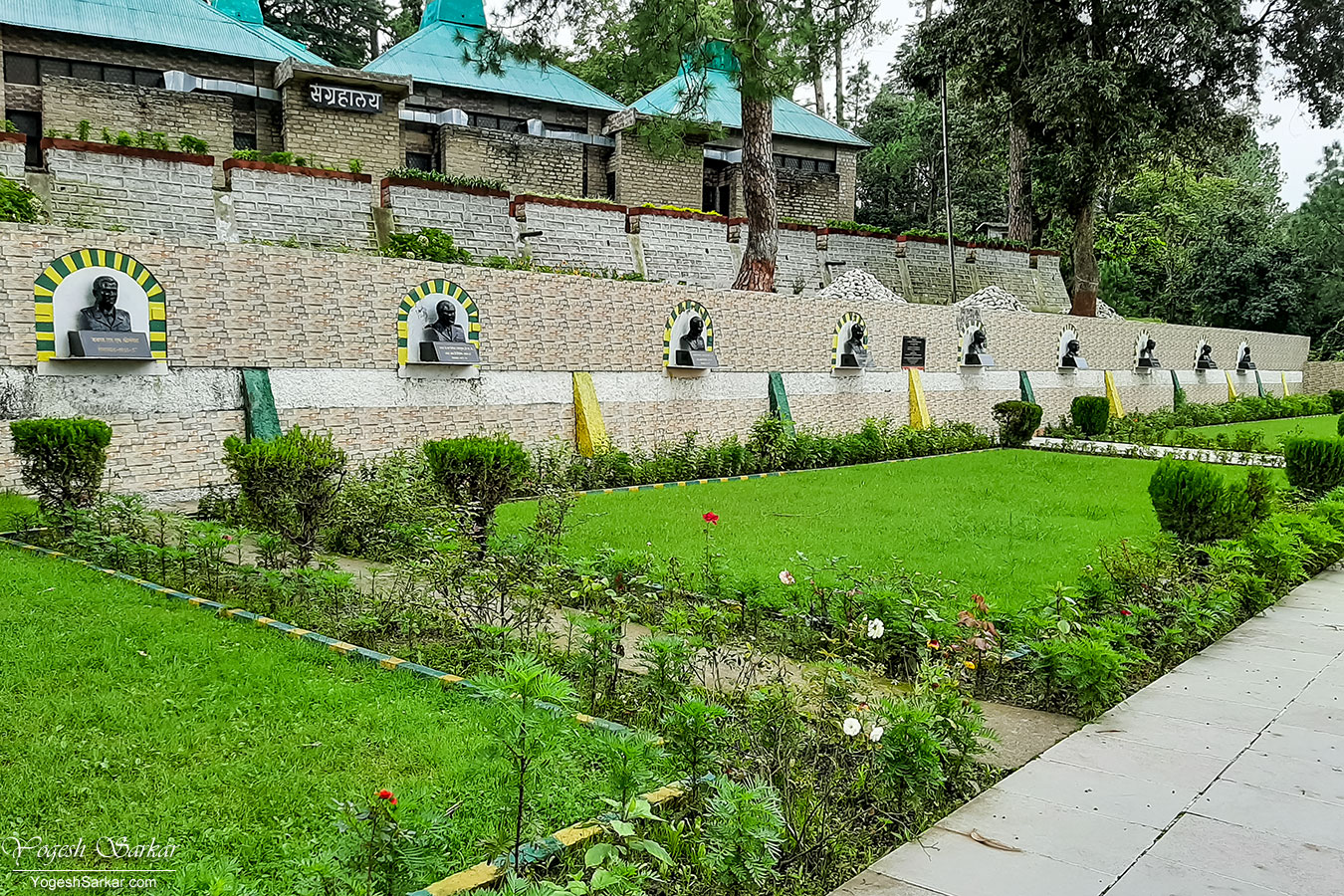 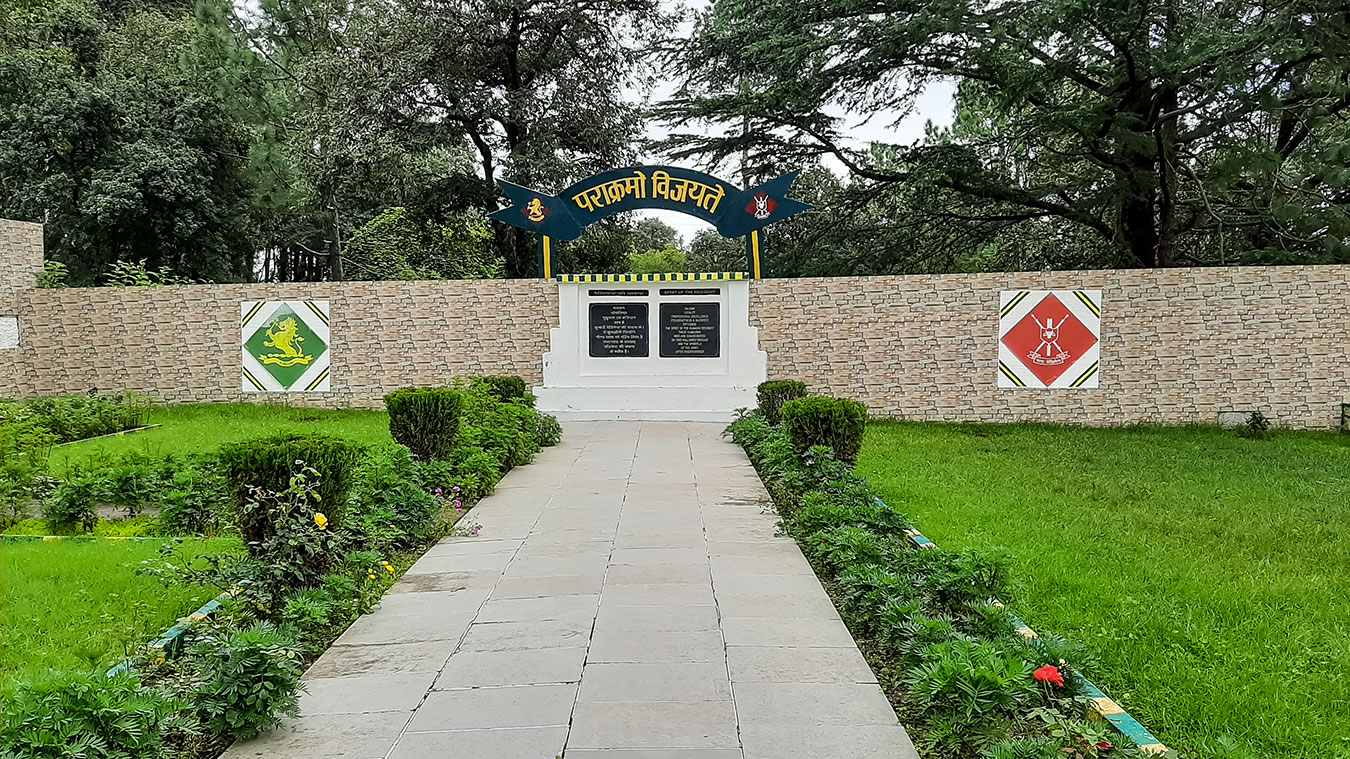 No such luck at the museum though. There was no photography allowed, inside or outside the museum, I even had to leave my mobile phone at the counter, while paying Rs. 50 for the ticket. Inside there was a vast collection of weapons and regimental memorabilia from Kumaon and Gorkha Regiment. I even got to see a movie describing the history of Kumaon Regiment and the heroic feats it has been involved in, since it was first raised by the Nizam of Hyderabad as Nizam’s Contingent, before eventually being christened as Kumaon Regiment in 1945.

After visiting the museum, it was time to travel to the golf course. However, before that, I asked Lalit to stop the car near the entrance to the cantonment and went to the dilapidated Globe Theatre, which even in this condition, looked impressive, to say the least. 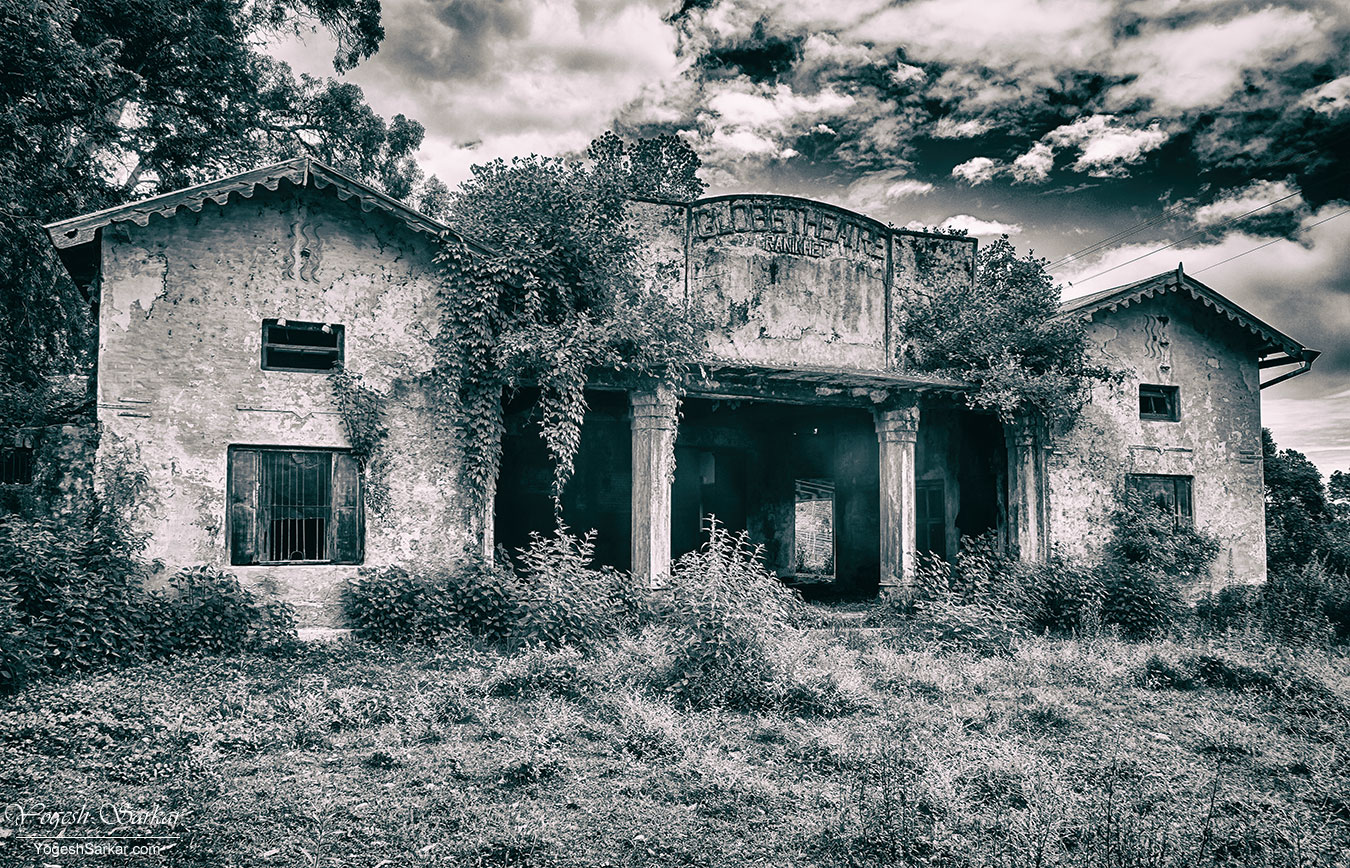 Turns out, there is an Rs. 200 fine for those venturing inside it and it is in bad condition with the floor laden with cow dung and one the perpetrator sitting before the stage, enjoying the solitude. 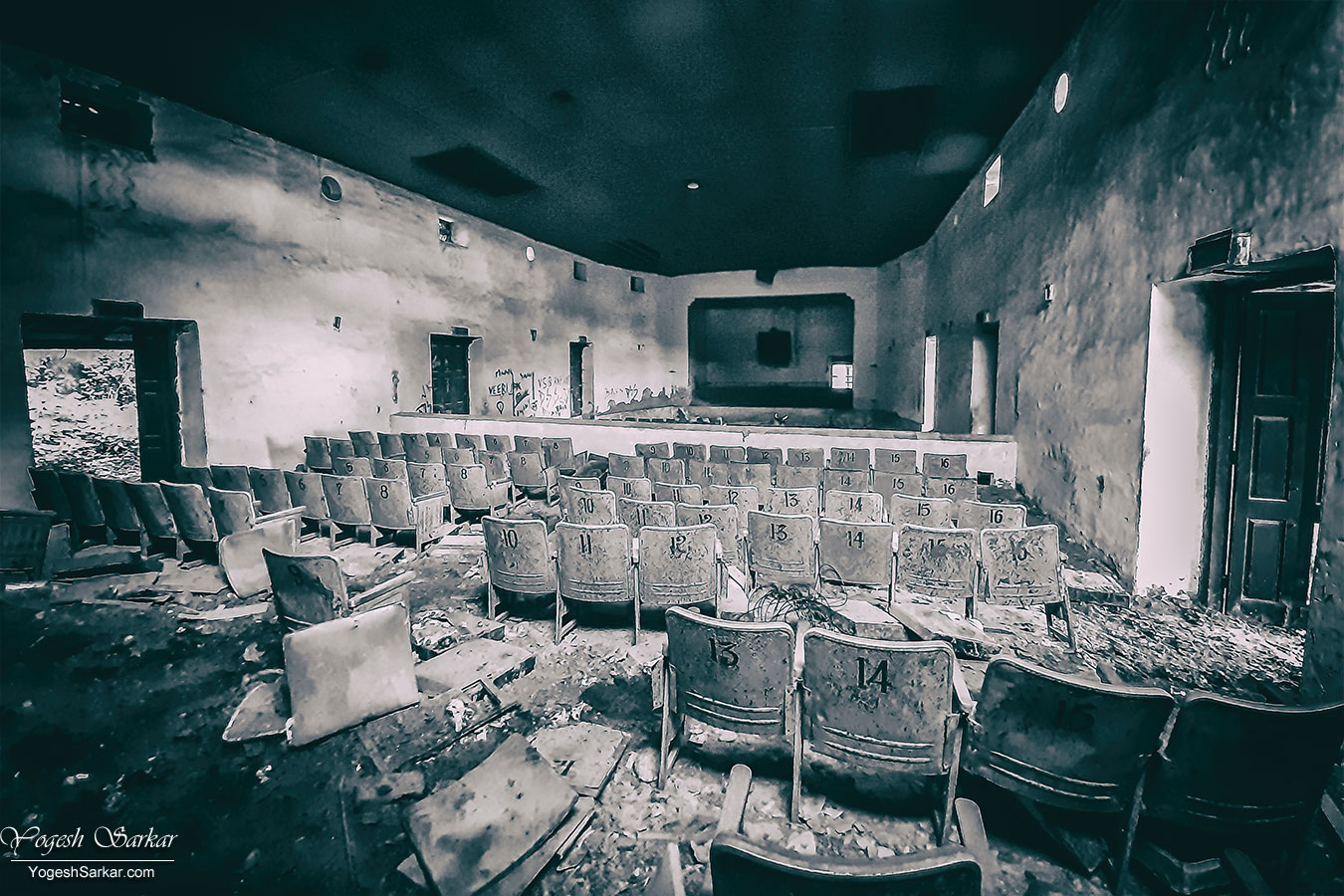 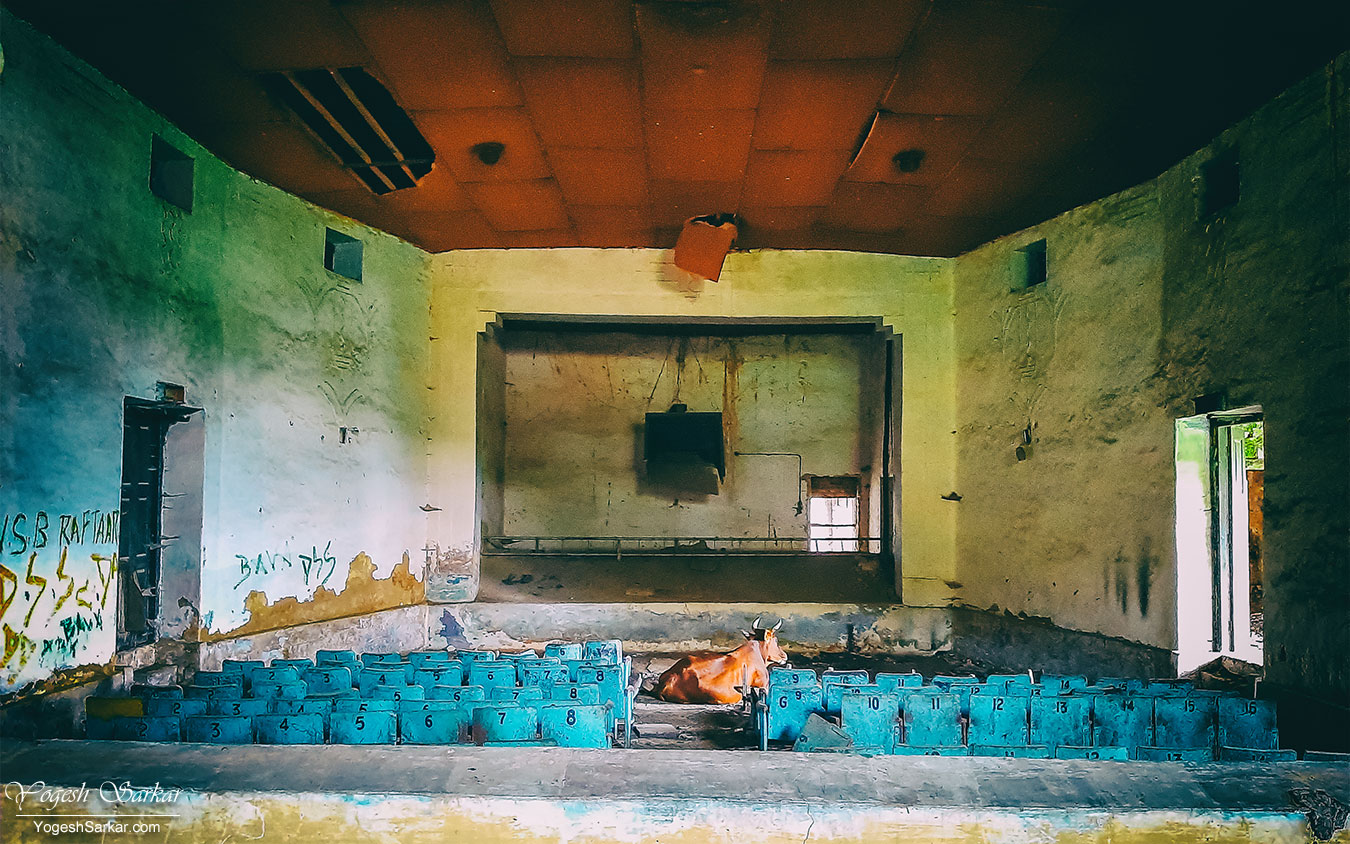 After the brief stopover, we drove through the Ranikhet town and to the Golf Course, through the winding and beautiful roads of Ranikhet.

The nine-hole, Upat Golf Course turned out to be an army one, maintained by the Kumaon Regiment and tourists were enjoying it at a point, where there was no fence and for most, it might as well have been a green meadow with trees around it for selfies.

Nevertheless, clouds and the beautiful road around it made for some beautiful photographs and I too took a few, before getting back into the taxi. 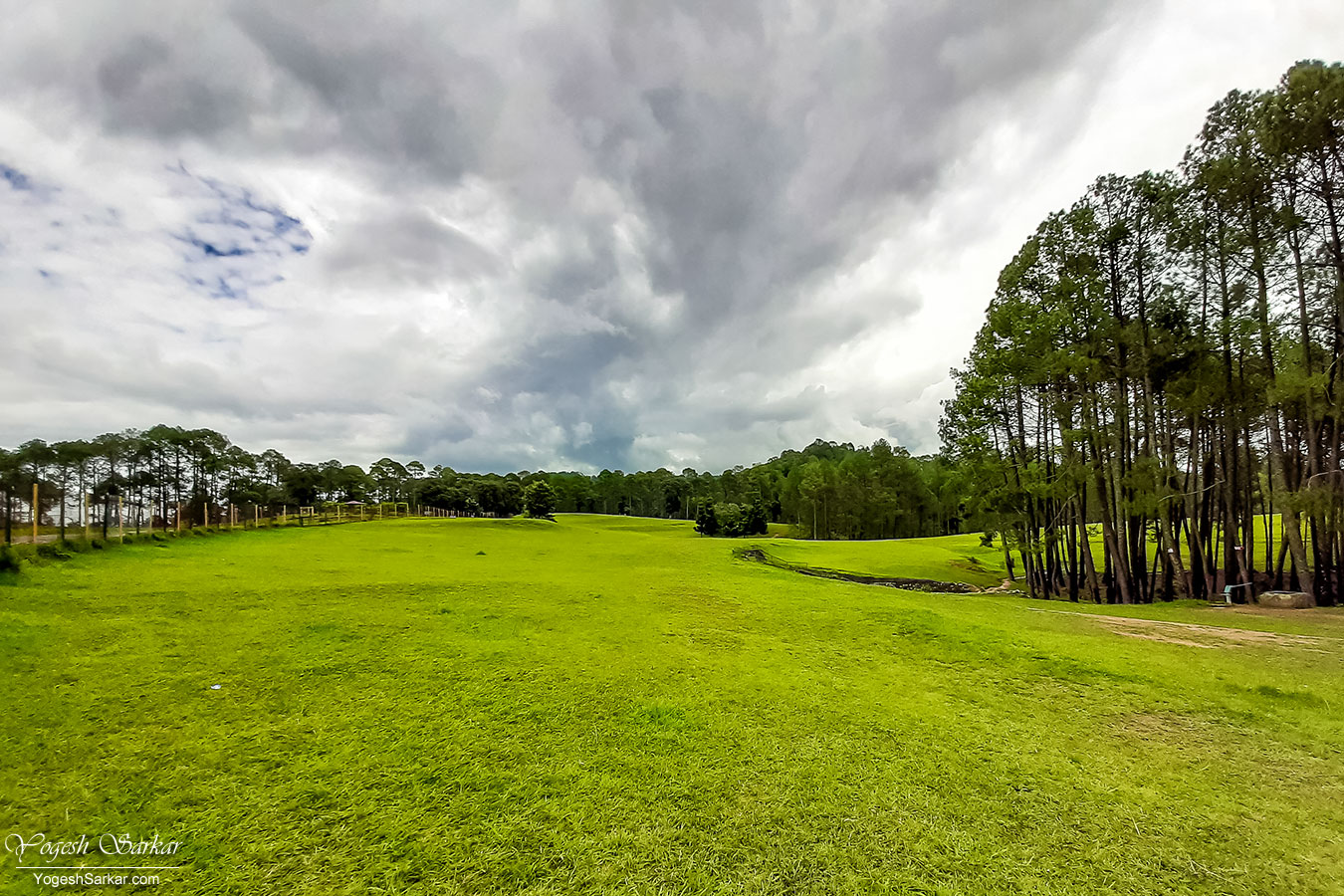 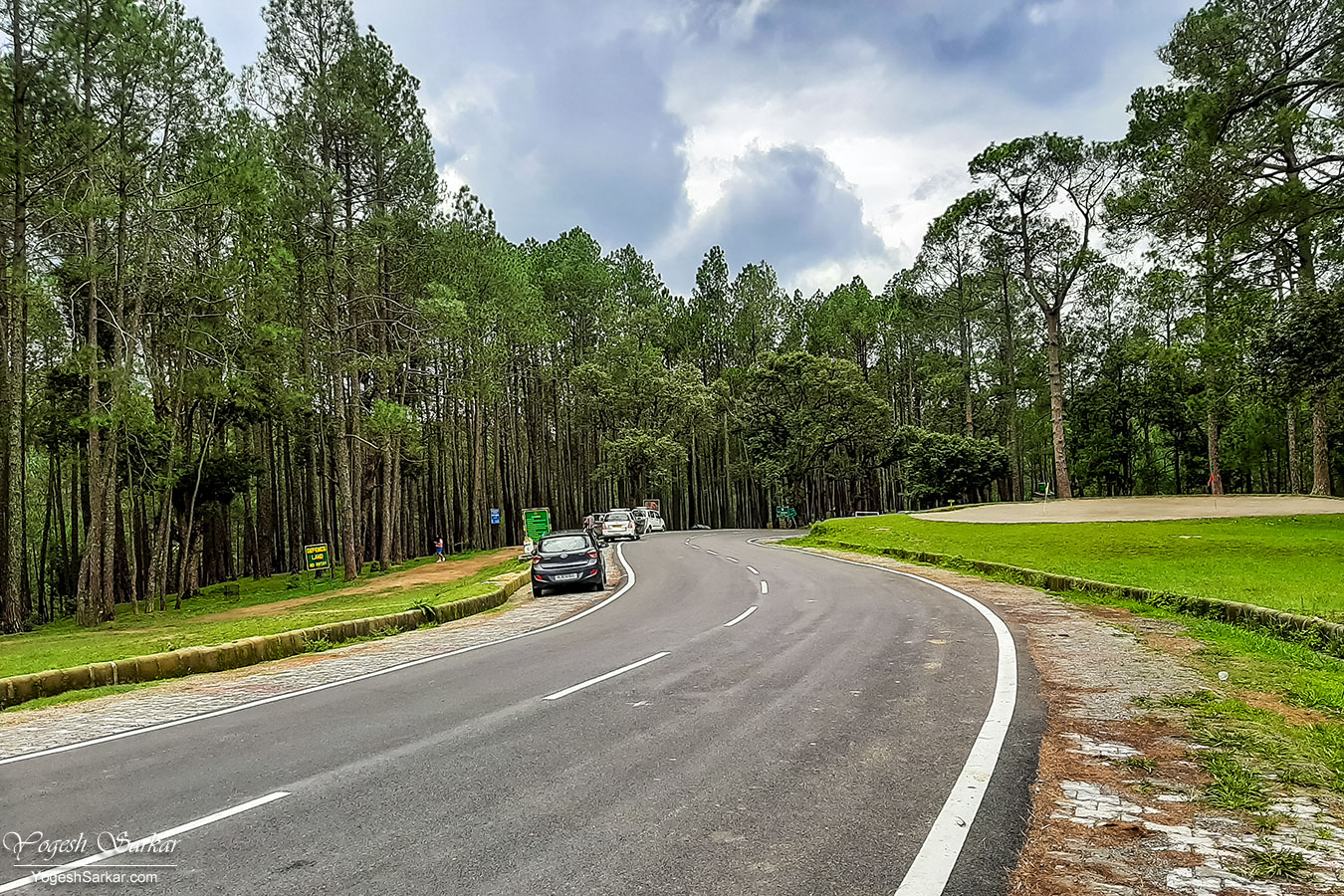 After this, we went back to the KMVN, having completed the entire tour in less than three hours for that, Rs. 1,500 seemed a little steep. However, we did cover quite a few kilometers.

By noon, I was back in my new room with a light drizzle-taking place outside, listening to songs, scribbling in my journal and contemplating my next move.

Justtraveller said:
Hi
Images and write up both are really excellent. Waiting for next part.
Click to expand...

Yogesh Sarkar said:
In the moments she is not poking her head out of the window and emptying out the content of her stomach, I take a few photographs and smile at the beauty around me.
Click to expand...

A wonderful piece of writing with a natural flow. Ranikhet had always been one of my favorites, especially for the sunset colors during monsoons.
Waiting for the next part........

A wonderful piece of writing with a natural flow. Ranikhet had always been one of my favorites, especially for the sunset colors during monsoons.
Waiting for the next part........
Click to expand...

Thanks Vivek. Yes, it is a beautiful place. More so if you are into nature walks or have your own vehicle to move around.

I am already imagining myself there with a glass of beer wonderful travelogue.

foadbear said:
I am already imagining myself there with a glass of beer wonderful travelogue.
Click to expand...

hahaha cheers and thanks