lovely updates, GD. will have to wait for your computer issues to be resolved. I am praying that it done with no loss of data..

kdacharya said:
GD and Chetan,
how accessible is Bandhavgarh from either Bombay or Delhi?
Click to expand...

Umaria is the closest railway station from Bandhavgarh (35 Kms) but there are no direct trains at least from Mumbai to Umaria to the best of my knowledge. So if traveling by train you can go from Mumbai to Katni and from Katni it's approx. 3 hours by road to Bandhavgarh. Else you can fly from Mumbai or Delhi to Jabalpur and from there it's a 5-6 hours road journey. The most important thing before booking travel or hotels is to book the safari's online.

While the lunch was being prepared, I took a round of the property with my camera hung across the neck and clicked some pictures of the landscape, our cottage and a petite butterfly feasting on nectar. 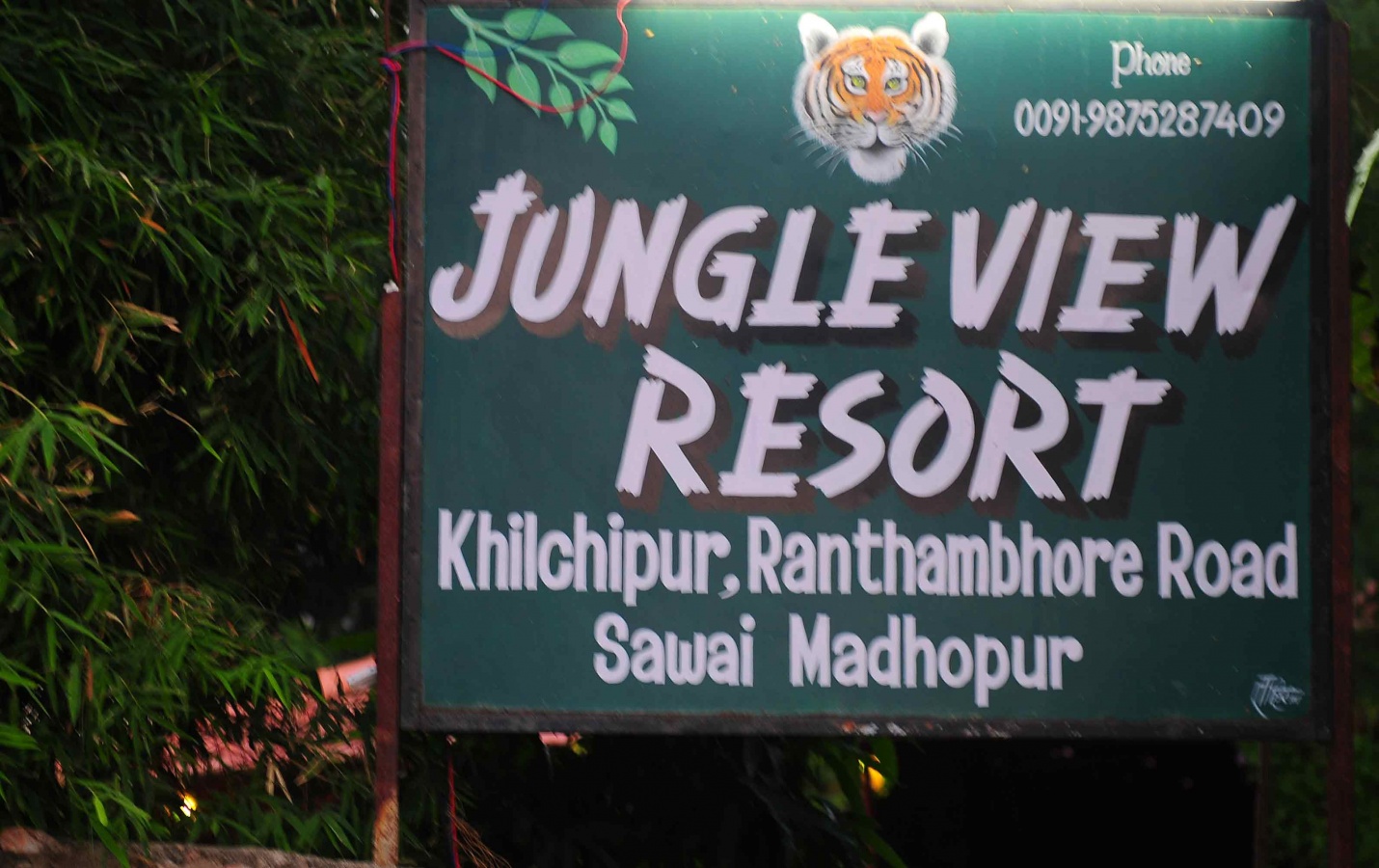 Our room on the extreme left with the door open 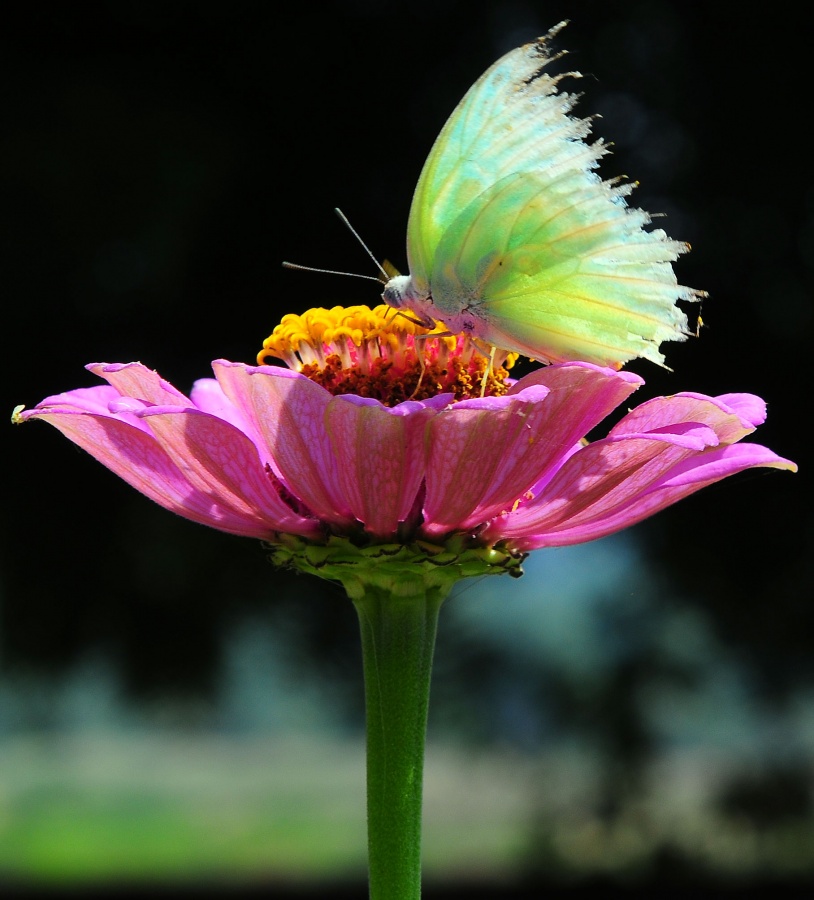 Sharp at 2:30 the gypsy arrived with the guide and we three boarded. Wife being tired had opted out of this safari at the time of booking itself. I had read in the newspapers a few weeks back that one of the female tigresses of the Park T-13 had given birth to 2 cubs and the mother & the cubs were moving near the jungle periphery & were being spotted. I asked the guide about this and he confirmed and said that we were going to Kundal Ghati or the Zone 6, because that is where T-13 is camping. I was excited. I was so close to getting my wish fulfilled.

I must mention here some very important fact. I have a great peev & angst against the wildlife sanctuary authorities. They don't disseminate proper & thorough information. The same goes for the resort/hotel owners too. Further, the tourists and the travelogue writers contribute to it by not writing about the nitty-gritty, problems and chaotic conditions.

I did not know that Ranthambhore is divided in 6 zones. The entry to zones 1 to 5 are from one gate while Zone 6 or Kundal Ghati is about 8 kms away from the city. Secondly, there is a major cartel of private gypsy owners authorised by the forest department and even if you book the safaris weeks in advance, the zone allotment happens only an hour before the park opens in the morning & evening. What does this mean? It means that if you have booked two safaris, then don't be surprised if you get the same zone both times. And that is what happened to me and thrice in succession. It was only when I raised a stink, then I got the last safari in a different zone. I'll come to that episode later. Same is the case at Corbett too.

Dudhwa has two zones and we were taken by the guide to both the zones over a period of two days. Rajaji or Chilla has only one zone and it is a 40 km roundabout drive done over a period of two & half hours or more. Sariska has three zones but the main action is in the central zone only hence it is better to go there and normally the safaris are done in that area only.

I've yet to know about Kanha & Bandhavgarh. Maybe only when I go there, I would get to know.

We raced towards Kundal Ghati and driving through the heart of the city via meandering lanes we reached the checkpost. After due entries we were inside the forest. Now this forest was looking different. Lot of greenery around. And then the guide explained - 2010 experienced very very good rains all over and R'bhore was no exception. This forest had received unprecedented rains after a gap of five years. Hearing this my heart sank. Somewhere I knew that there wouldn't be any sighting for me. Why? Plenty of water available in the deep and animals don't need to come out to the peripheral waterholes to quench.

A view of the green Jungle 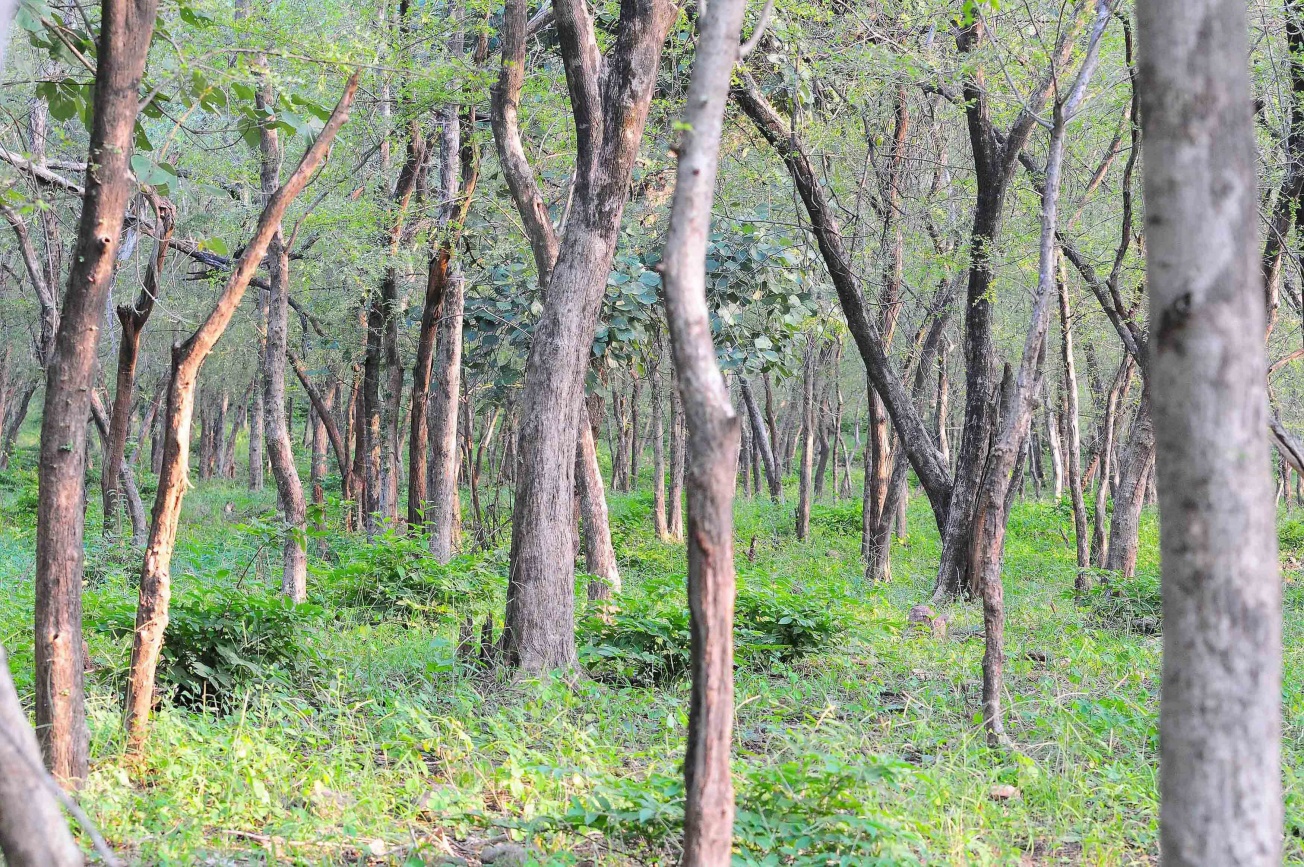 Any how we drove along and we spotted this big male Sloth bear foraging. A very rare sight indeed. Generally very difficult to see. I immediately changed my camera settings to monochrome because the bear being jet black except for its snout, taking in colour would not have made a good copy. 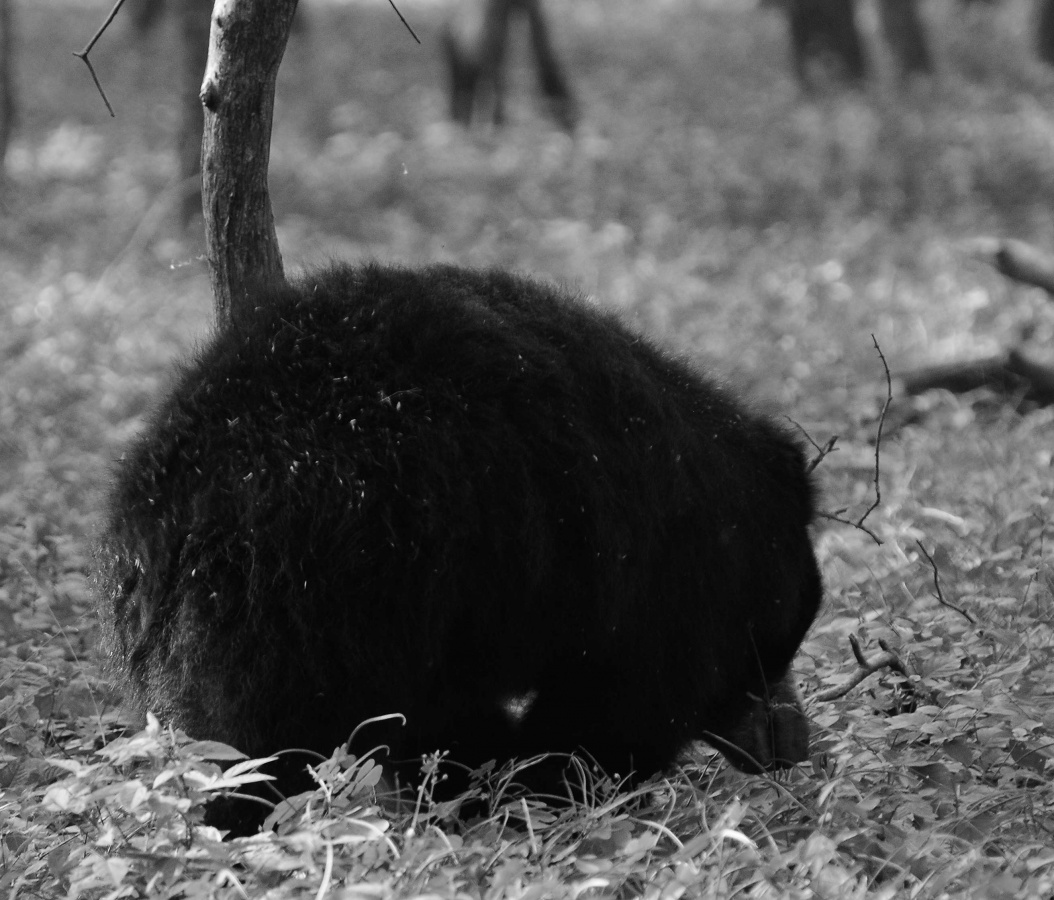 Huge is an understatement...! 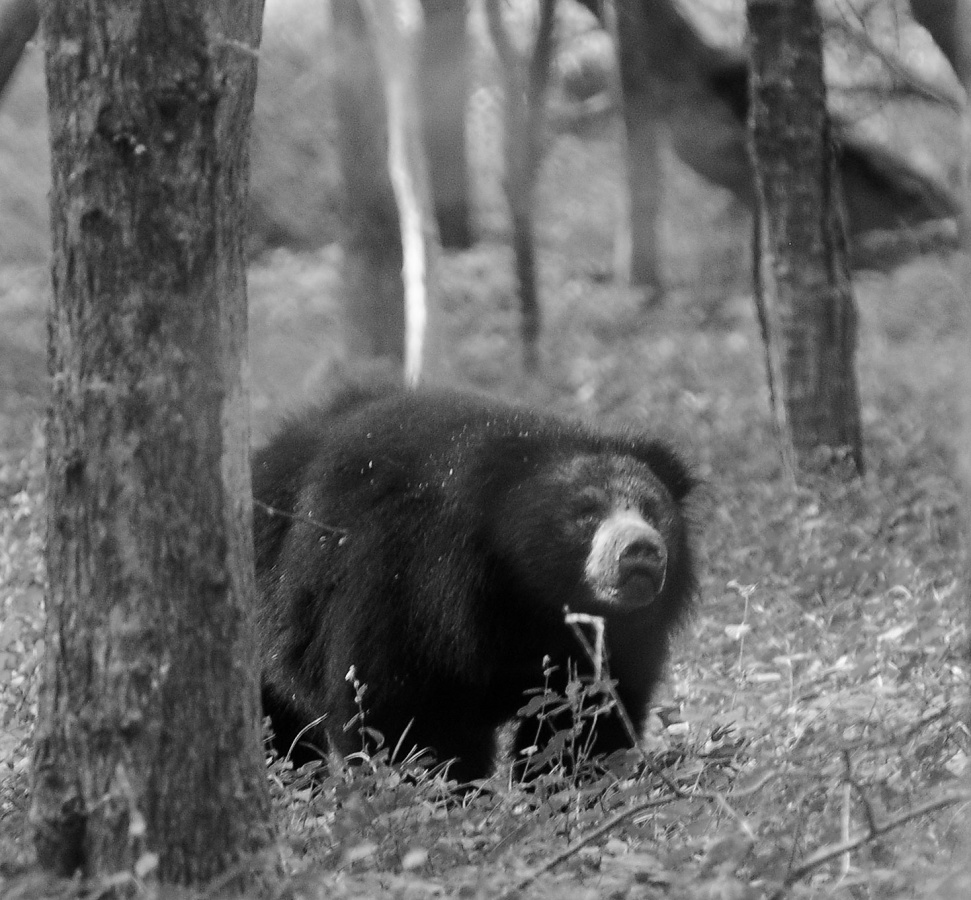 We moved on further and then suddenly the vehicle stopped. The guide slowly pointed his finger to the left. Perched on a low branch was this magnificent Crested Serpent Eagle. 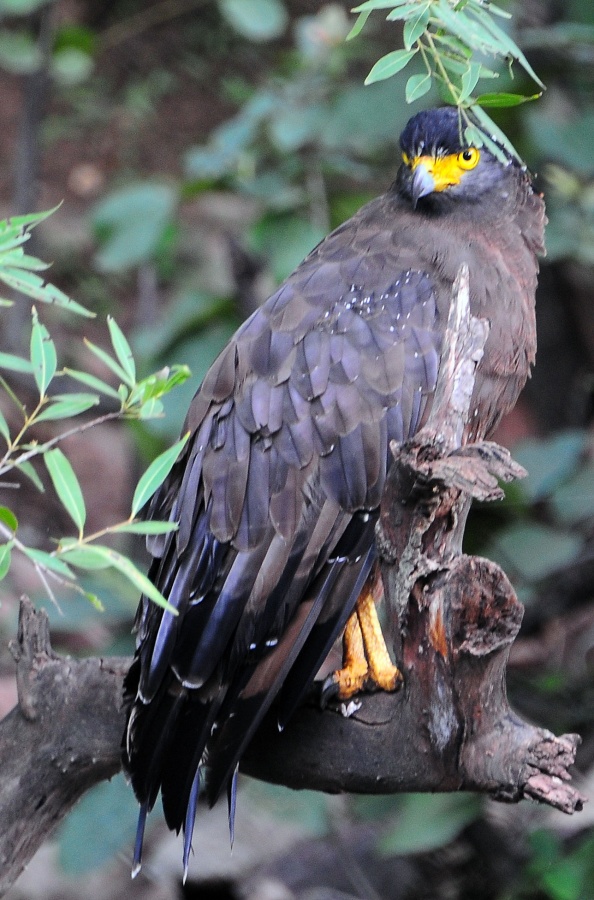 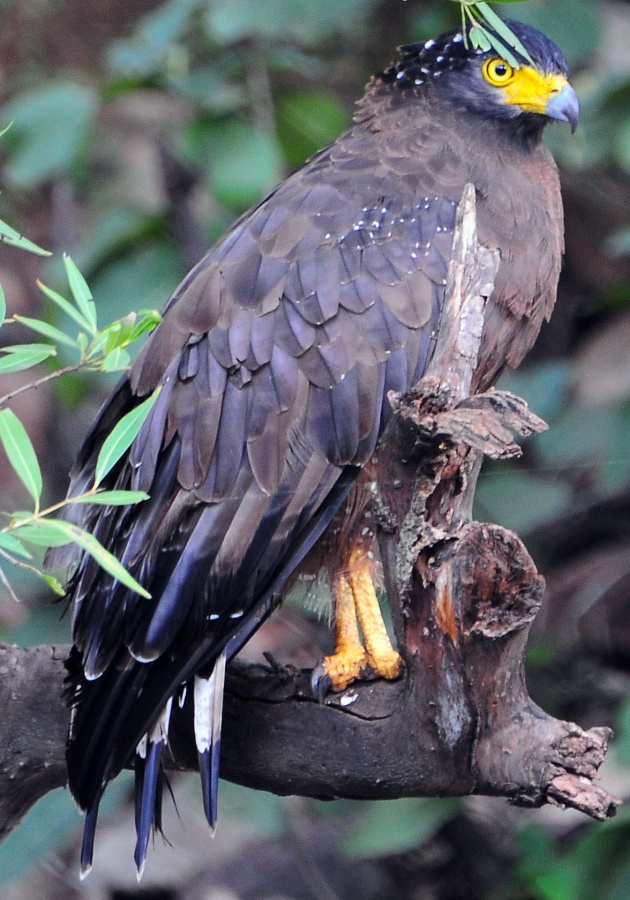 We roamed at all parts of the jungle and no animal was seen. We reached a spot where there was a deep well and found other gypsies also parked. The guide said that this well was hundreds of years old and its water had medicinal properties. I amusingly saw some other tourists filling their empty Kinley & Aquafina bottles with that water. While this act was going on, I ventured a bit far and saw this female Langur sitting on the ground. She allowed me to approach near her that I did very cautiously and clicked a picture. 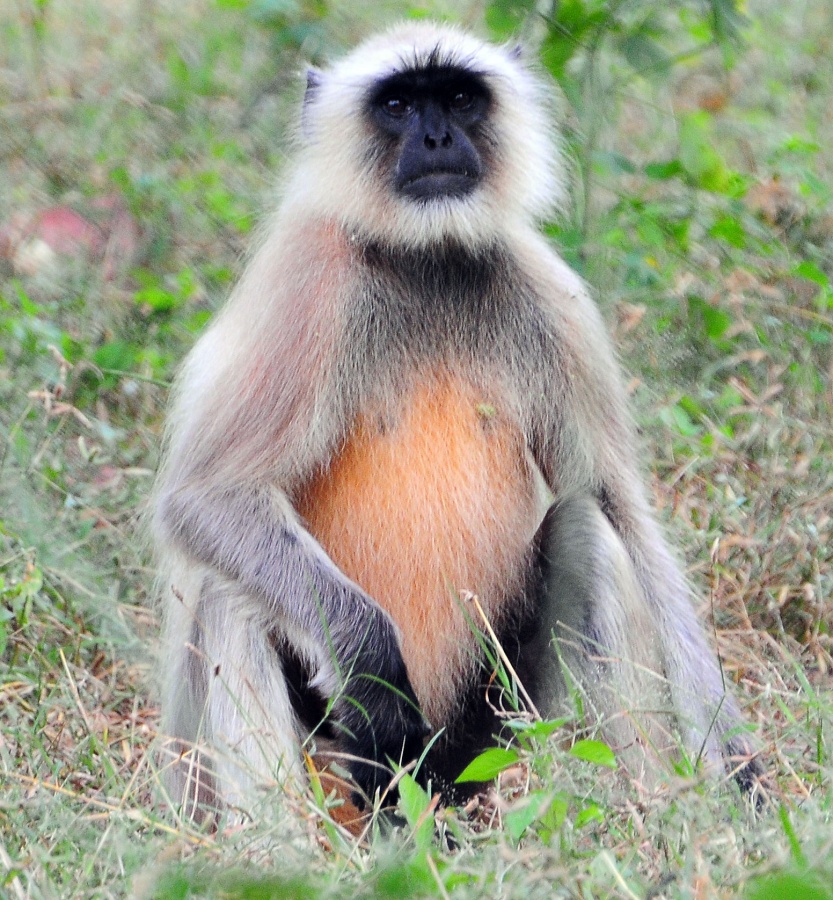 Also clicked a picture of my son & daughter standing next to the vehicle. 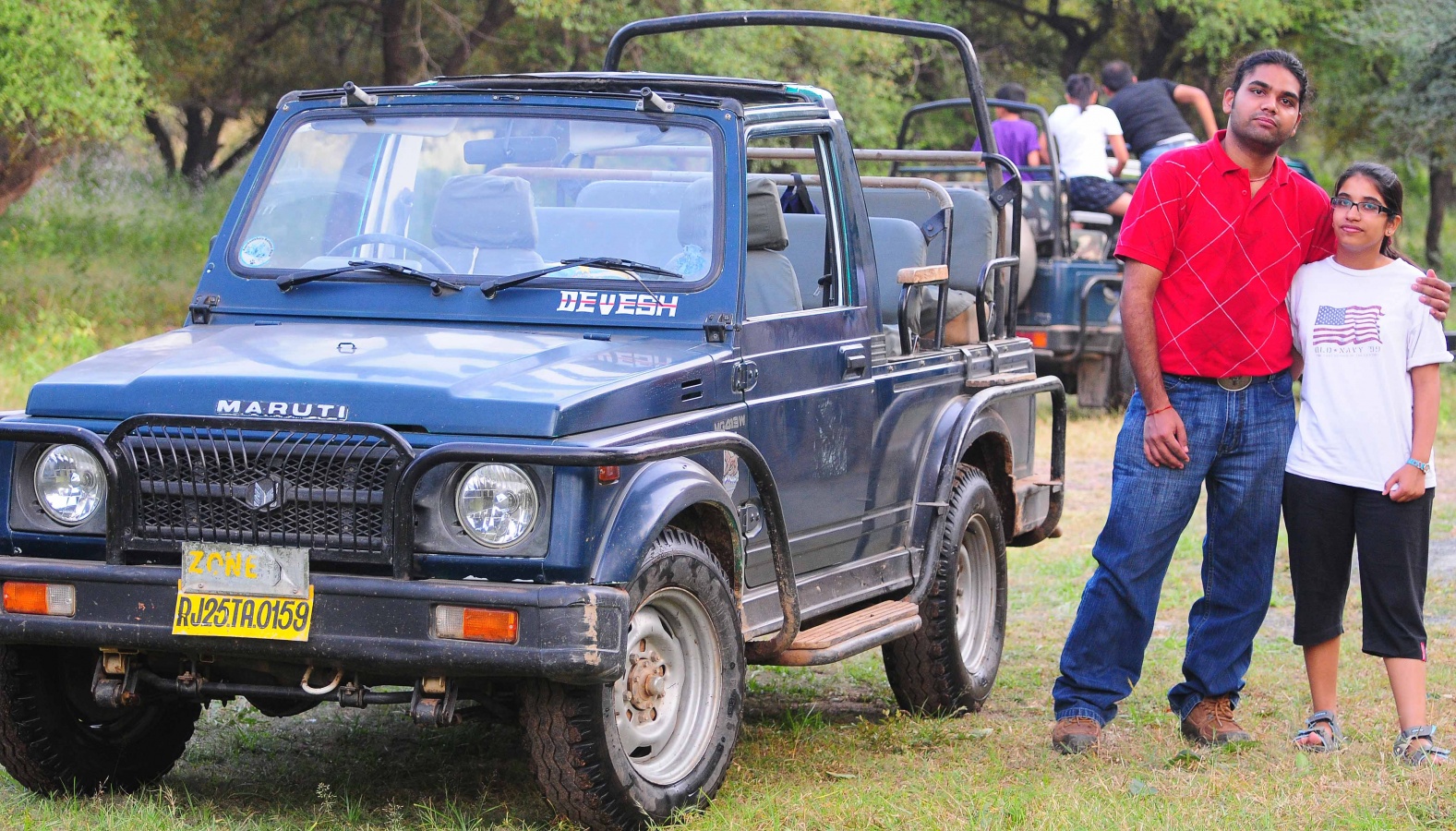 We had to exit the forest before 6 and so it was time to return. On the way we saw this pair of deer foraging and then slowly walking towards the resting place for the night. 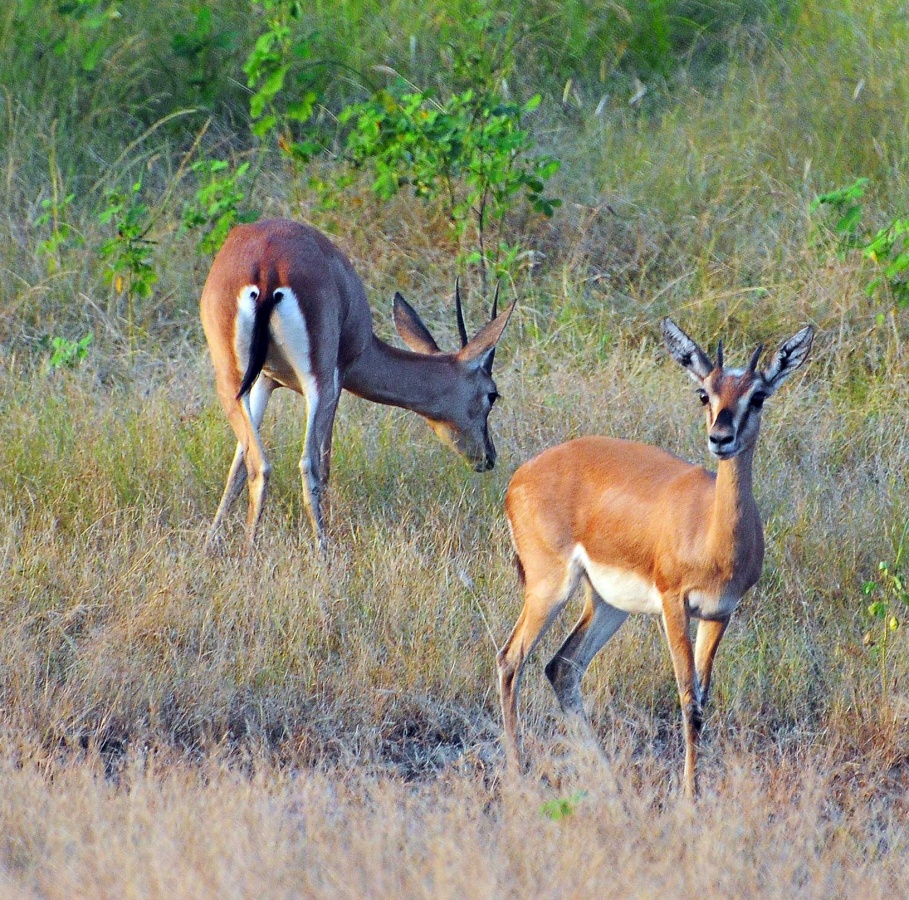 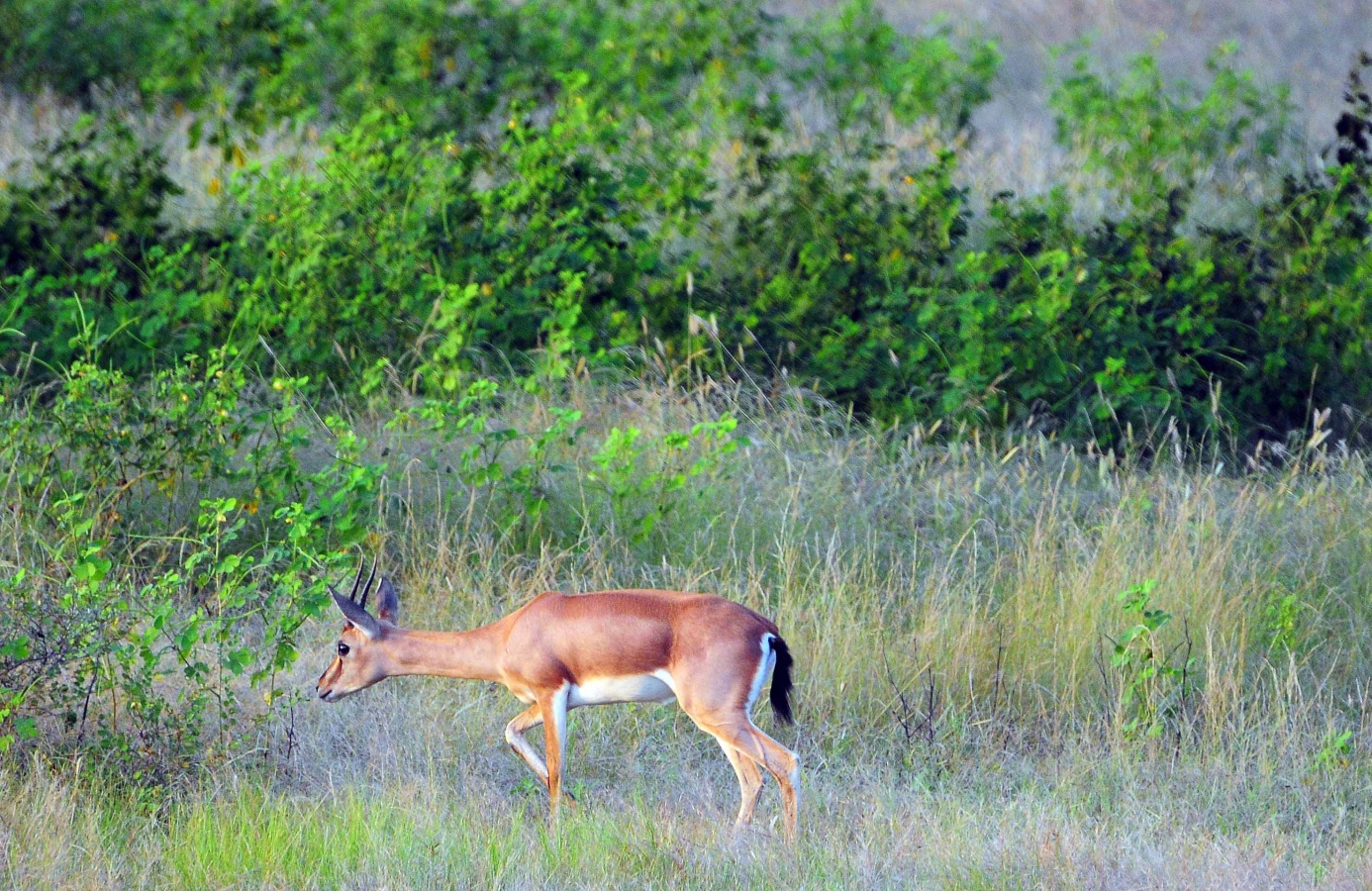 Nearing the gate saw this solitary nest of the weaver bird. Apparently it seemed unoccupied.. 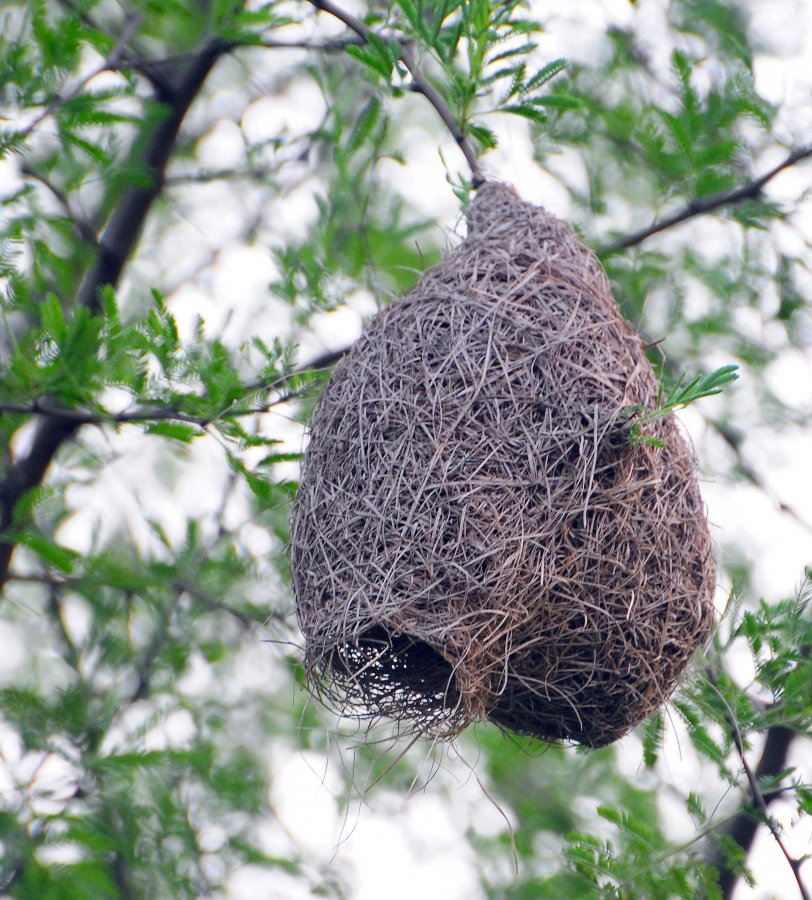 Thus ended the first day at Ranthambhore and we returned to our resort with hope for the next day.

Excellent strat Sir. Whre are the striped ones?Eagerly waiting for them.

Thank you Shantanu. Since this thread is currently in a flashback mode, you will have to wait for a "year" to see the photographs of the stripes.

Superb narration! I'm spellbound with your play of words and adding some new words to my vocabulary.

Waiting for next update of your fantastic recitation of seemingly wonderful experience!

This was the safari that the whole family was going to. One room, one bathroom & 4 adults. Let me explain. When you travel, boarding & lodging takes a major chunk of your expenses. To cut this down to the minimum, we normally take a room with extra bed and manage in that.

The safari gypsy would come by 6:45 am. Everybody had to get ready before that. Since I would take the longest time in the bathroom, I had to get up quite early and get ready the first. Well, I got ready and came out of the complex with my camera. Climbed a small hillock as I wanted to catch the onset of dawn & the rising Sun. 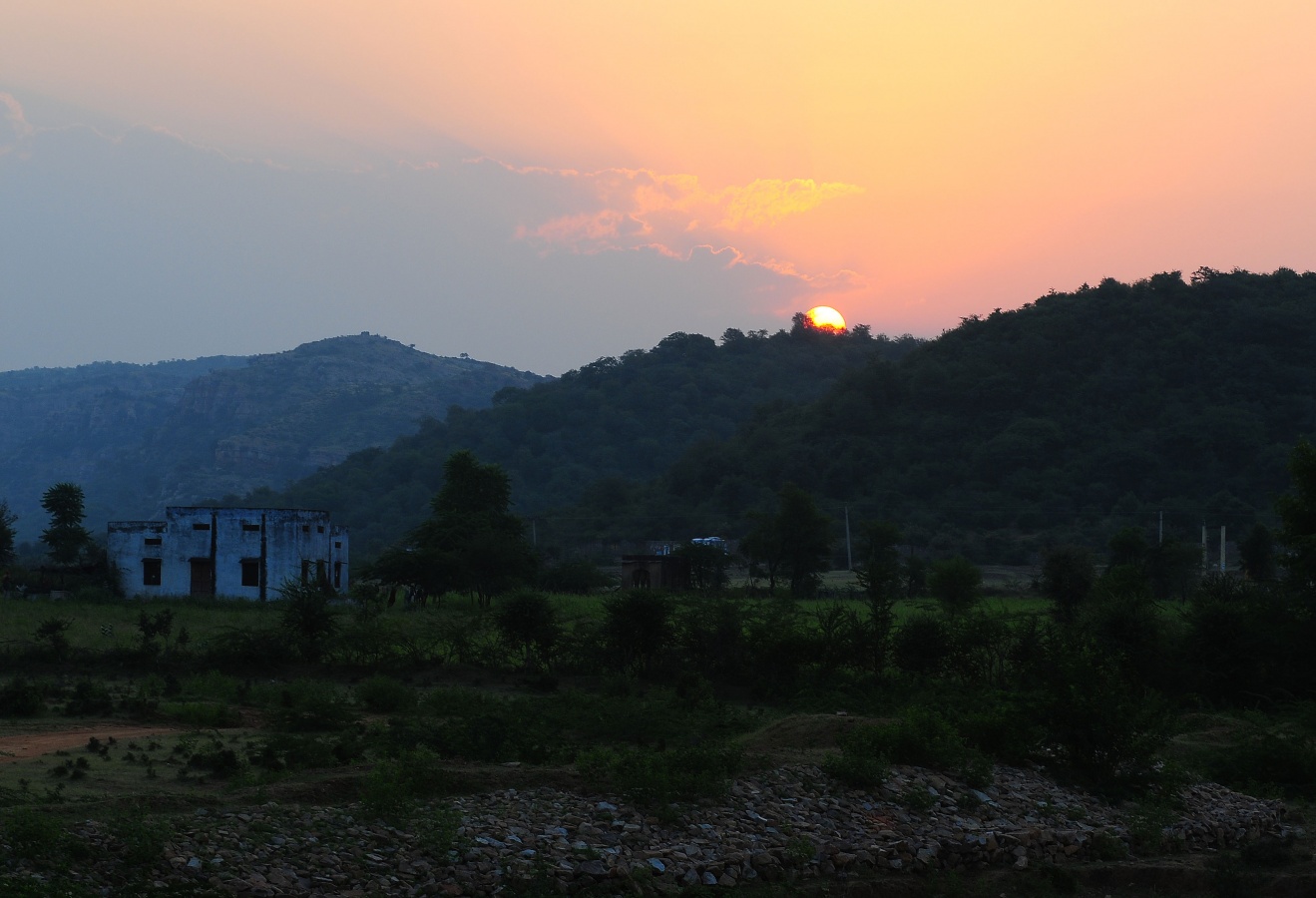 The gypsy came and the guide informed that we would be going to Zone 1. This guide was different from the one who was with us the previous evening. He said that T-13 had crossed over to Zone 1 from Kundal Ghati last night. I asked him for his source of information and he said he got this info from the villagers residing inside the forest.

As mentioned earlier, Zones 1 to 5 are approached from one gate and after making entries at that gate, you drive and reach a junction of sorts. Straight goes to Zone 2 & 3, left to 4 & 5 and right you go to 1. This junction is called the Singhdwaar. One has to make entries here as well.

As we made entries at the first entrance gate we heard a very heartening news from the forest guards manning that area - T-13 with her two cubs spent the entire night near their camp till 4 am and then got up and crossed over to Zone 1 area. We saw the female's pug marks and the tiny cat like pugmarks of the cubs. A new male had wandered from somewhere and he would prove a threat to her young cubs, she moved closer to human habitat as that would be safer.

With a song on my lips we entered Zone 1. 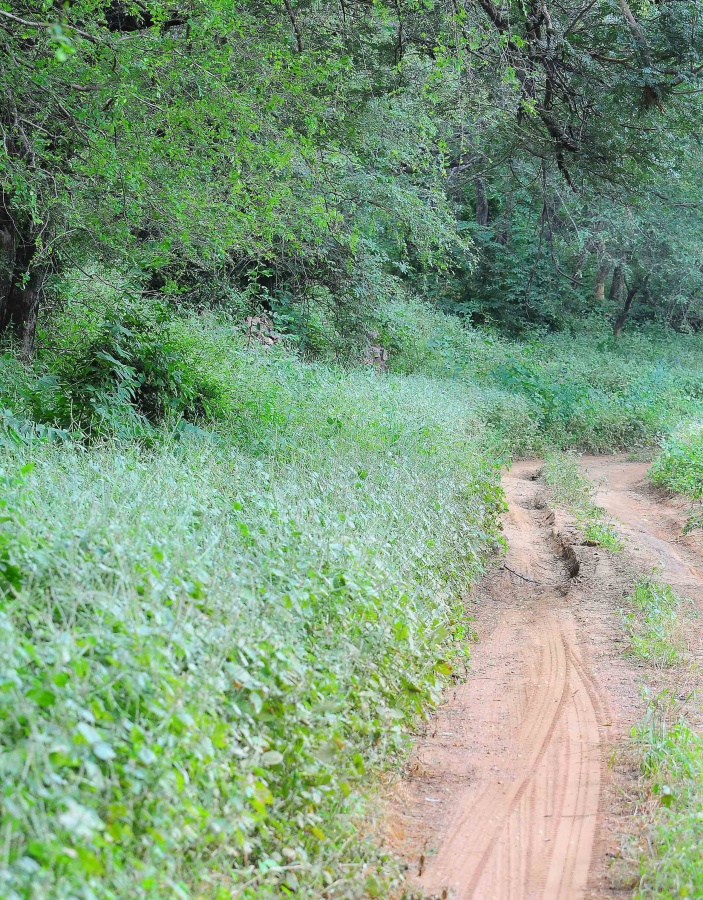 Roamed around, heard a few Sambhar & Langur calls indicating that T-13 was constantly on the move in the thicket looking for safety for her cubs, waited patiently at a few water holes but no luck at all. This picture would say all.. 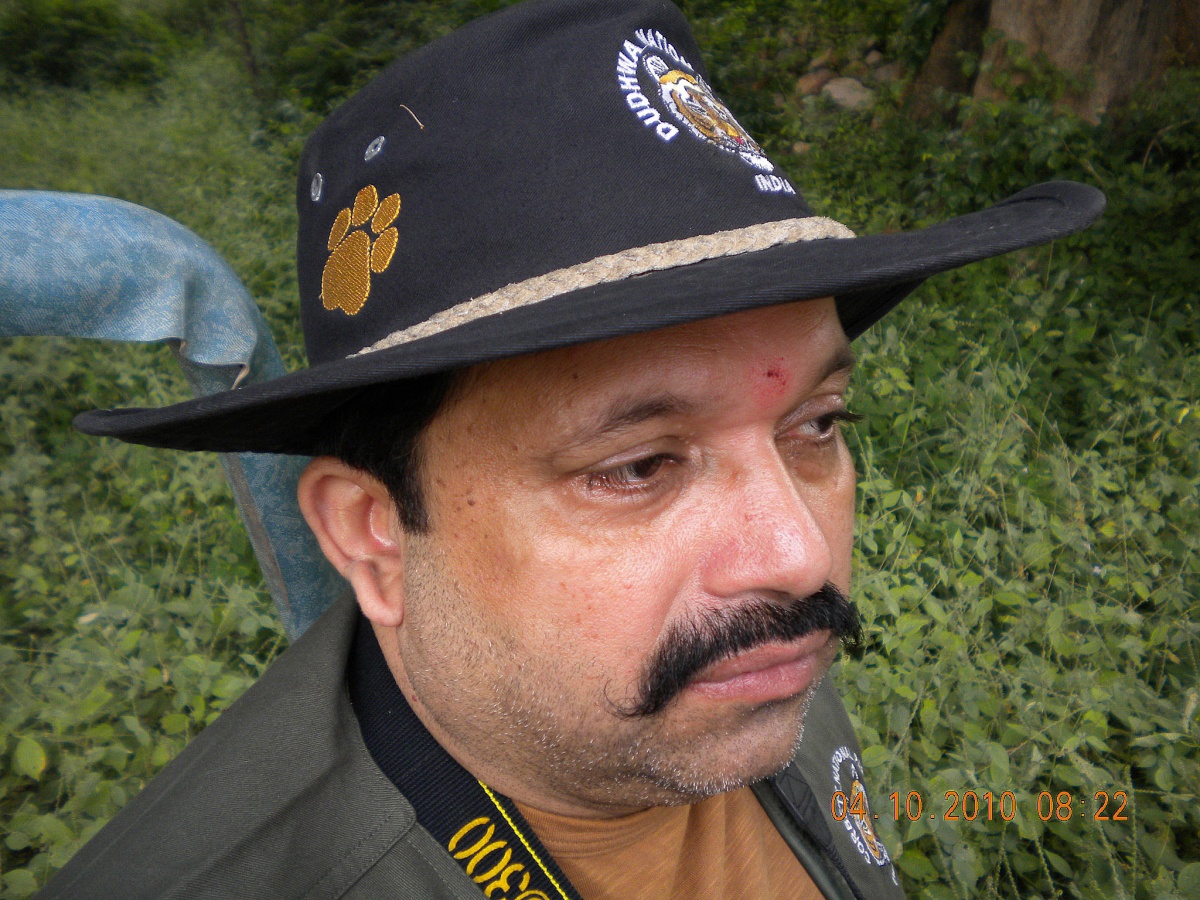 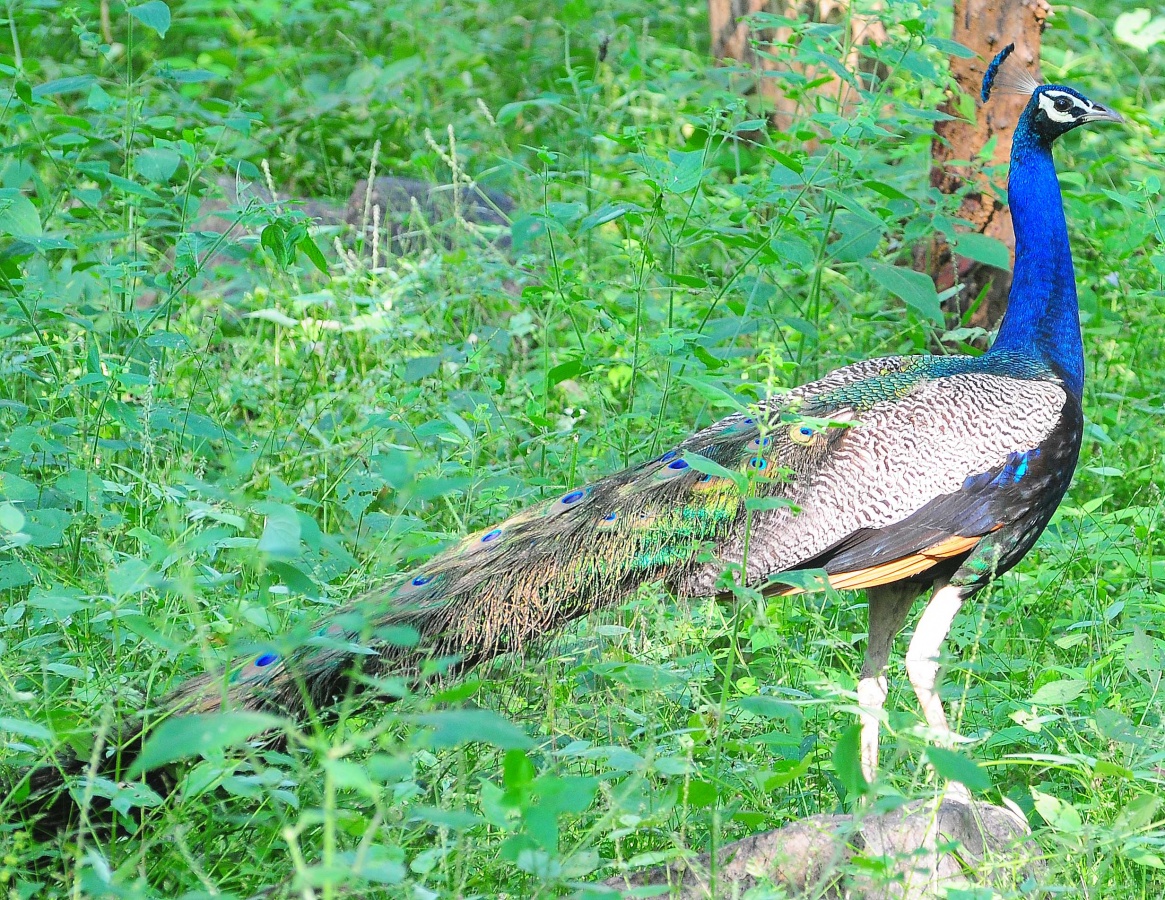 It is very difficult to capture a portrait of a Langur with the face being black. This Langur was sitting on the side of the road and I stopped my jeep near this animal. A shaft of sunlight was illuminating the entire body. Then something above attracted the animal's attention and he/she looked up. A perfect moment. And I clicked. 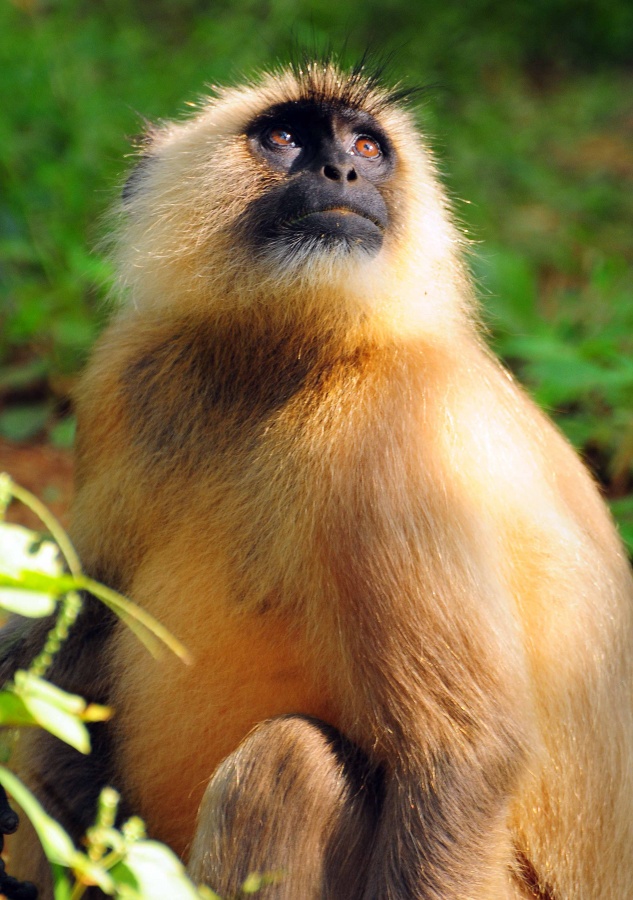 The lush green shall indicate how good the rains were and this provided fantastic cover to most wild animals. Thus ended our morning safari. Would we have better luck in the evening?