Shantanu Roy said:
Splendid Dkay!! Came across these siblings about 1 and 1/2 years back, they were yet to be named then. Feels so good to see them growing up so healthy.
Is arrowhead and Junior Machli the same one?
Also to mention here, Pacman's forehead markings remind me of Munna from Kanha.
Click to expand...

Thanks Shantanu!! Yes, the sub adults are totally independent now. They hardly meet these days and have started to hunt on their own. All three are still occupying area close to the lakes but Very soon I presume, Krishna will drive them out. She may be pregnant again. Lets see how the lake saga unfolds in the coming month.

Yes they call Arrowhead as Junior Machli. Apparently its to do with the similar markings.

Doesnt Munna have CAT markings on his forehead?
D

We had lost Pacman in the bushes. We could have waited for him to come out or explore rest of the zone. We had already seen 2 tigers since the morning, so I thought the best would be to move out of the crowd and go somewhere else.

We were told that the previous day, a Tigress called Lightening had killed a wild boar at a place called Karaunji ka Nala and had polished it off over night. Those safari vehicles that had gone in search for her in the morning had returned without sighting her as she might have been cooling off at some water point away from the safari track. Anyways, we still thought we should go and take our chance.

Lightening, is the sister of Pacman and Arrowhead. It would have been nice to see her too, completing our sighting of all the siblings. Karaunji Ka nala is about 15 minutes drive from Padam Talab. Its a rain water stream that is usually dry most of the months. Some of the stream is visible from the track but some of it is very secluded. This gives the tigers a lot of places to be in peace.

As we reached there, we started to scan the area slowly. I dont know if I should I call it luck or our determination for another sighting we saw her sitting in a cave very close to the track 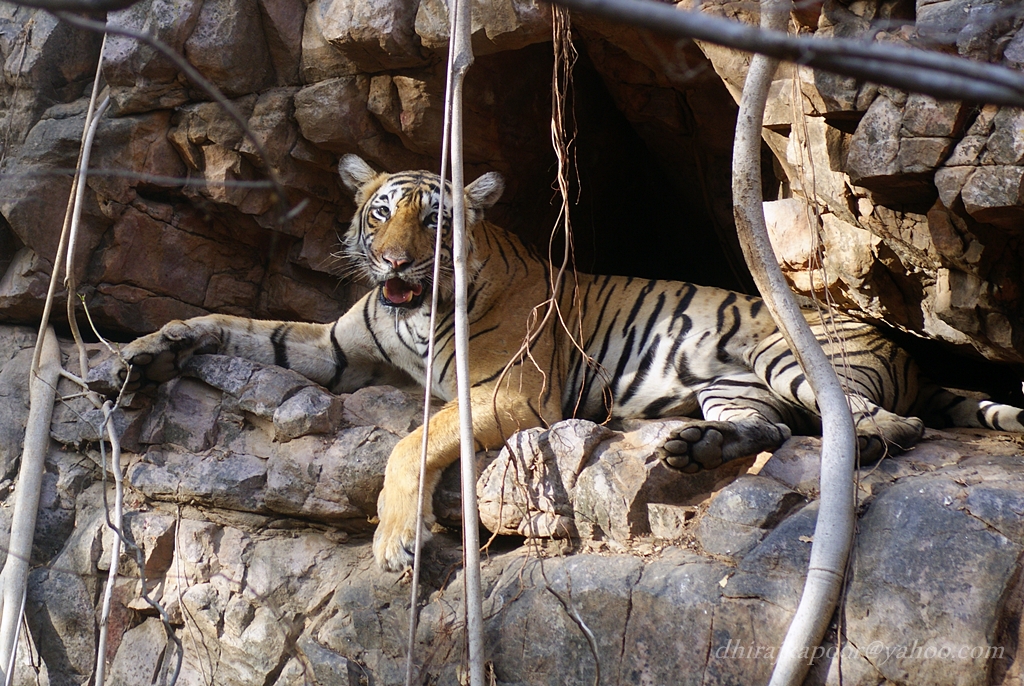 I presume, she must have been sleeping and only got up to check who was it when she must have heard our gypsy. She realised that it was tourists again, she went back to her siesta. 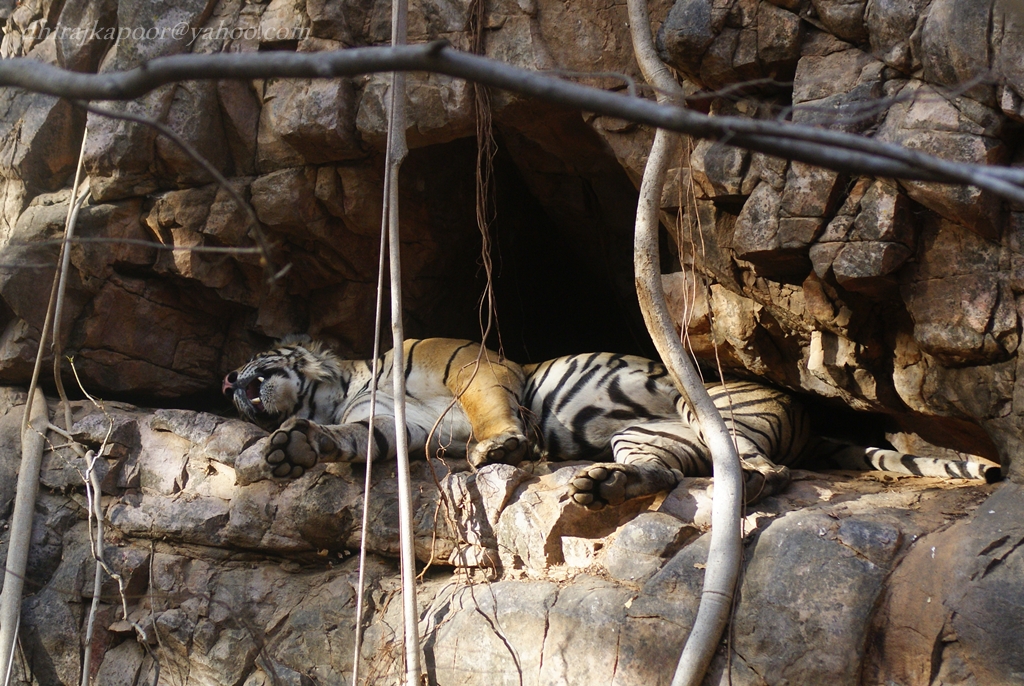 By then one more safari vehicle had come and any noise of any sort, she would get up and give a menacing look towards us 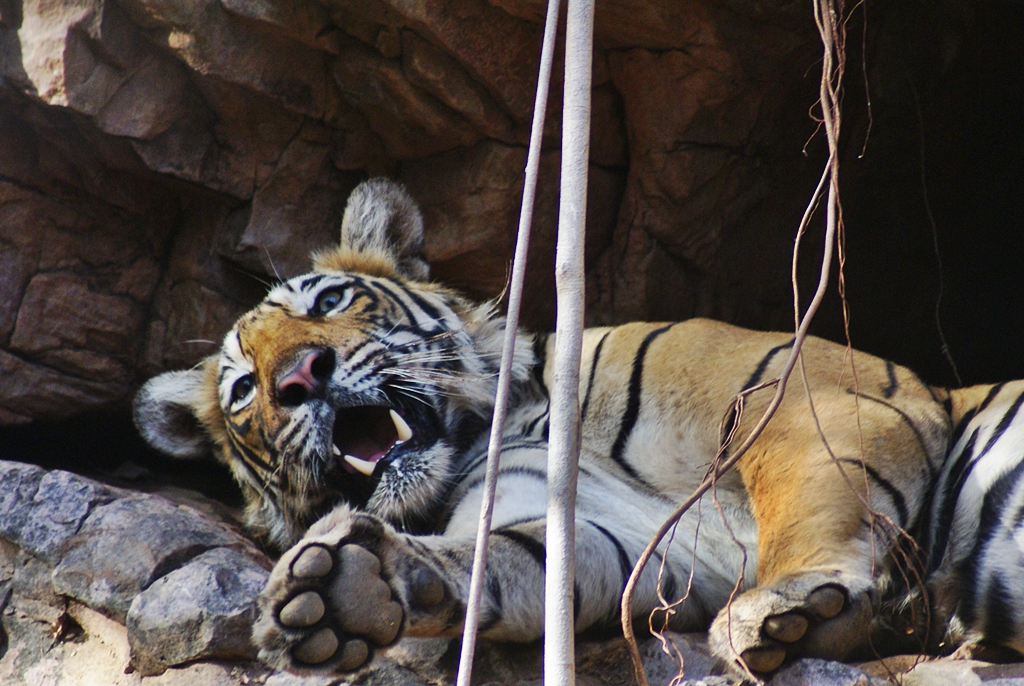 Finally she gave up and surrendered to her sleep. 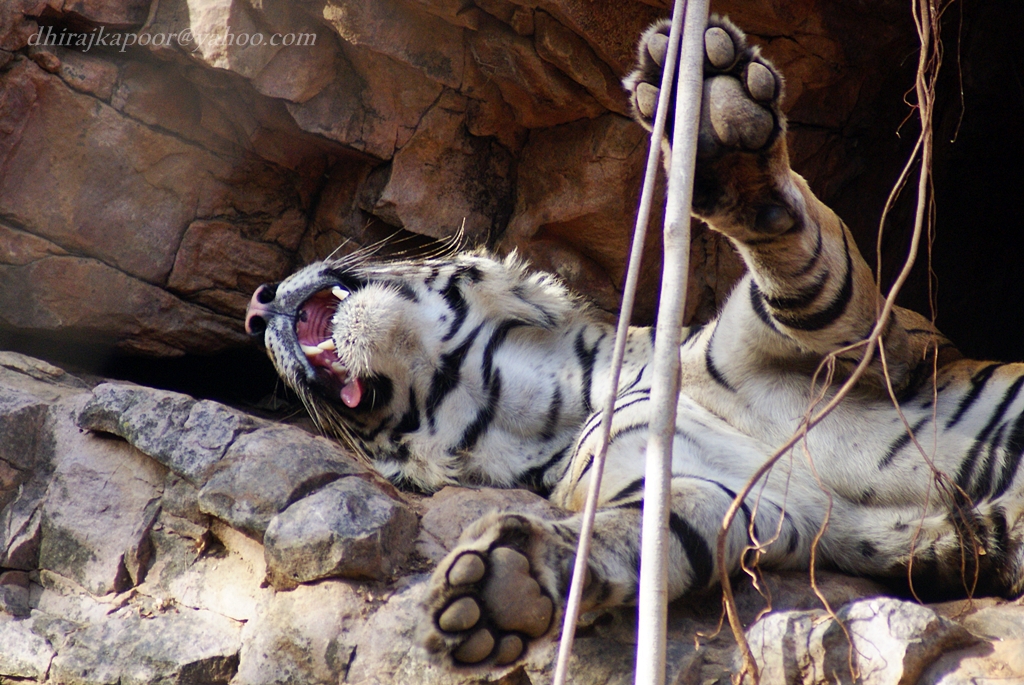 We were there watching her for 10 minutes and she just kept on sleeping. As mentioned earlier, somehow I start to lose patience if there is no action happening. So I requested my friends if we could let her be and go back to Padam Talab and see if there is any action happening there with the other siblings and luckily my friends agreed.

28th May - Morning Safari - Zone 3 (Continued from the previous post)

When we reached Padam talab, we saw a few safari vehicles still waiting for tigers to come out of the undergrowth. As per them no action had happened while we were at Karaunji Ka Nala. We told the other drivers about the sighting of Lightening and then started the race between them to reach there. This turned out to be a boon as we were almost left alone in that area.

We decided to scout the area for the hidden tigers. We were in store of a surprise. We found Pacman strolling a narrow track. This track was almost 1 km away from the place where everyone thought he was hiding. But somehow, he managed to give everyone a slip and reach till here.

We started to follow Pacman on this narrow track. Frankly, by then we did not know which tiger was it, because we could only see the back and was difficult to identify in that pose. But whichever tiger it was he was walking purposefully. 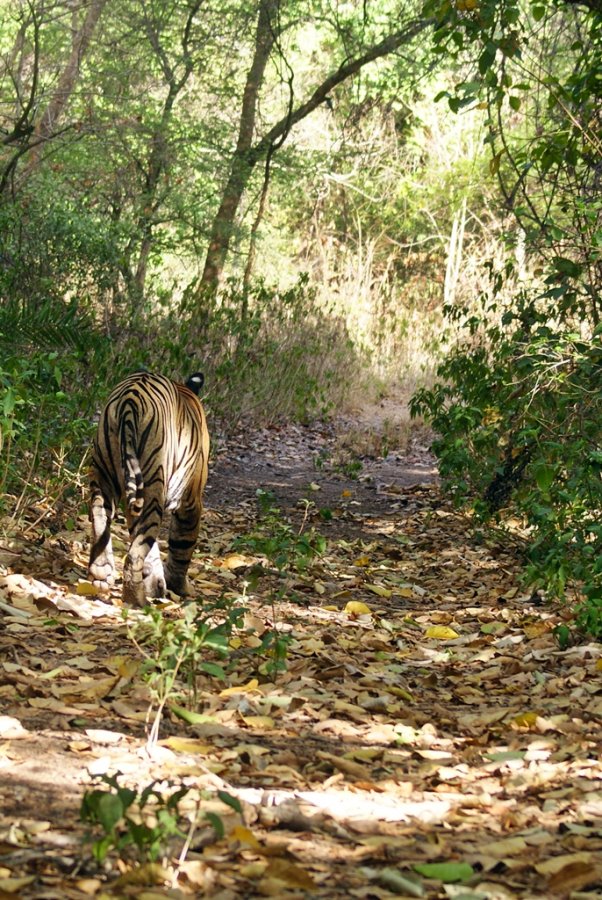 Though we were following him from a safe distance but the tiger seem to increase his speed with every stride. Suddenly, the tiger ducked and took attack position. We could not see who the target was but definitely, we were lucky, we could get to see a kill happen right now. Without wasting time the tiger made a quick dash, all we could hear was a loud "Ponk" of a sambhar and the tiger stopping. The attackn was foiled. The charge sequence can be seen in the collage from 1-4 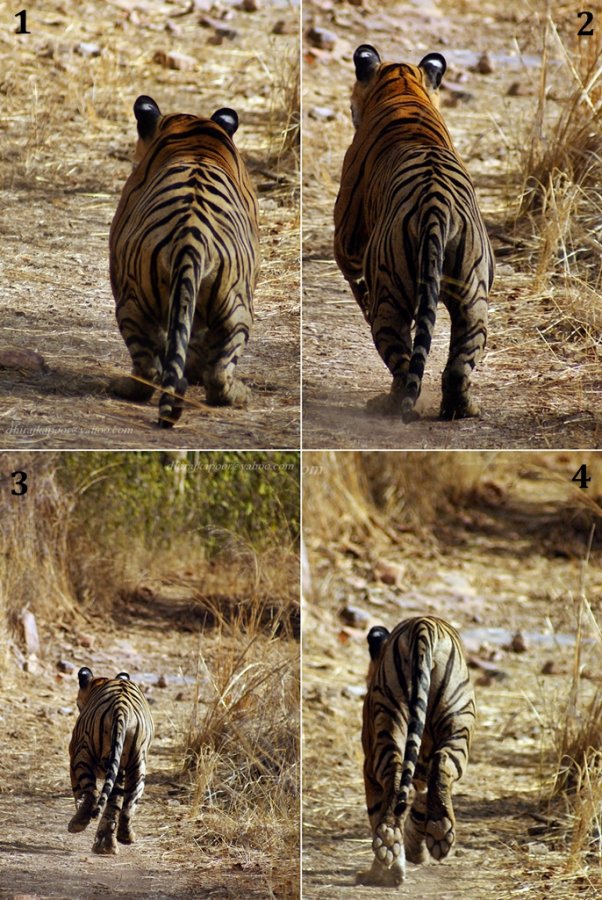 Ive seen Pacman charge before also. That time also his attack was foiled. And that time too after the foiled attack he looked sheepishly back towards us in embarrassment. Just like he did this time. 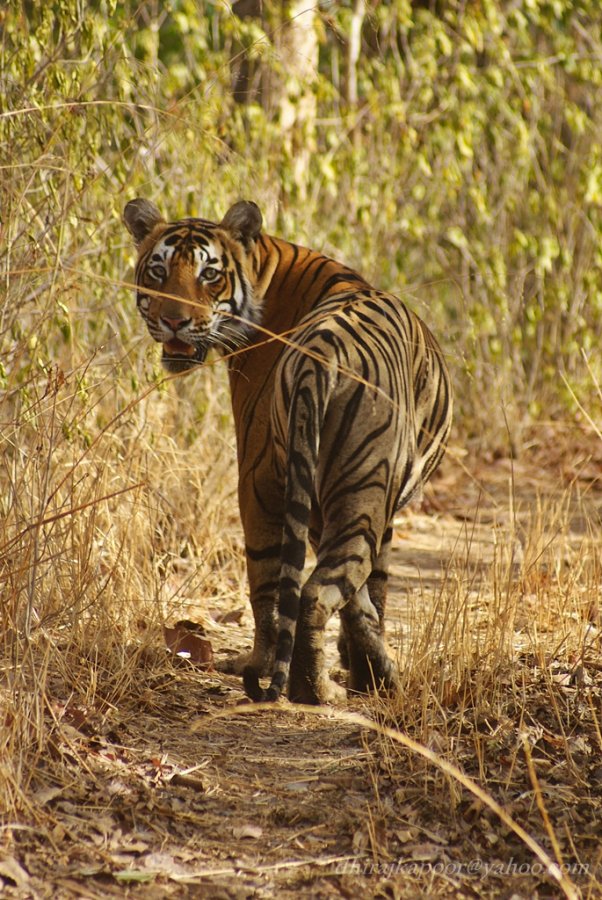 But unlike last time when he continued his stroll along the track, this time he decided to take a U turn and face us 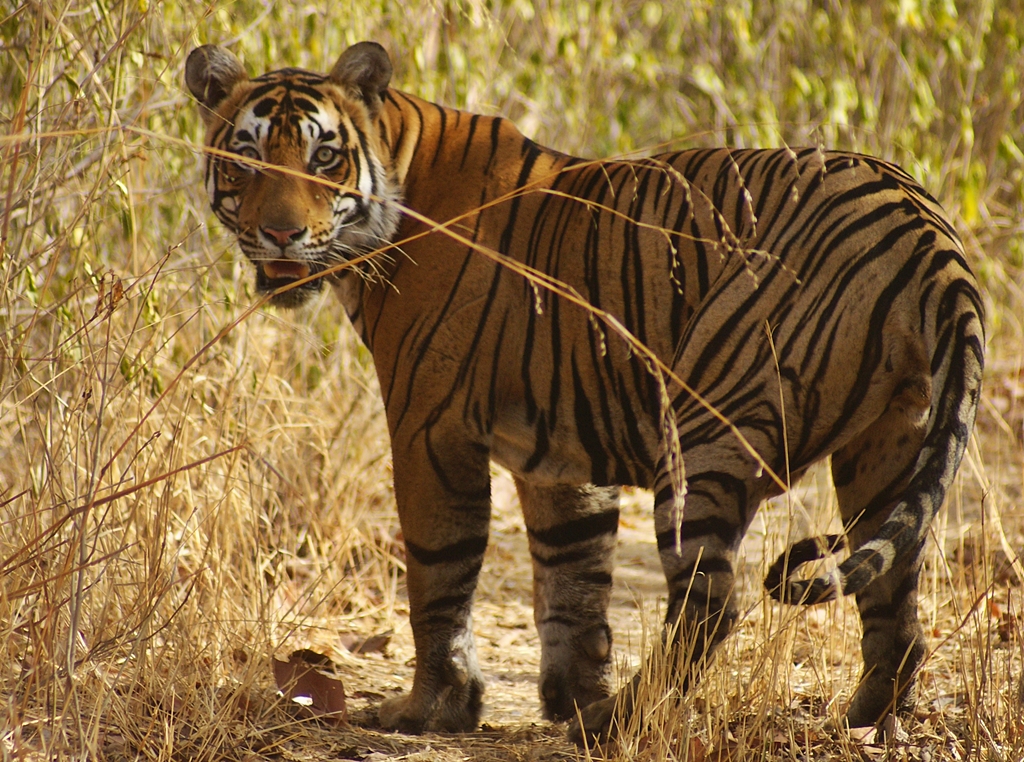 And then it was time to walk straight towards us 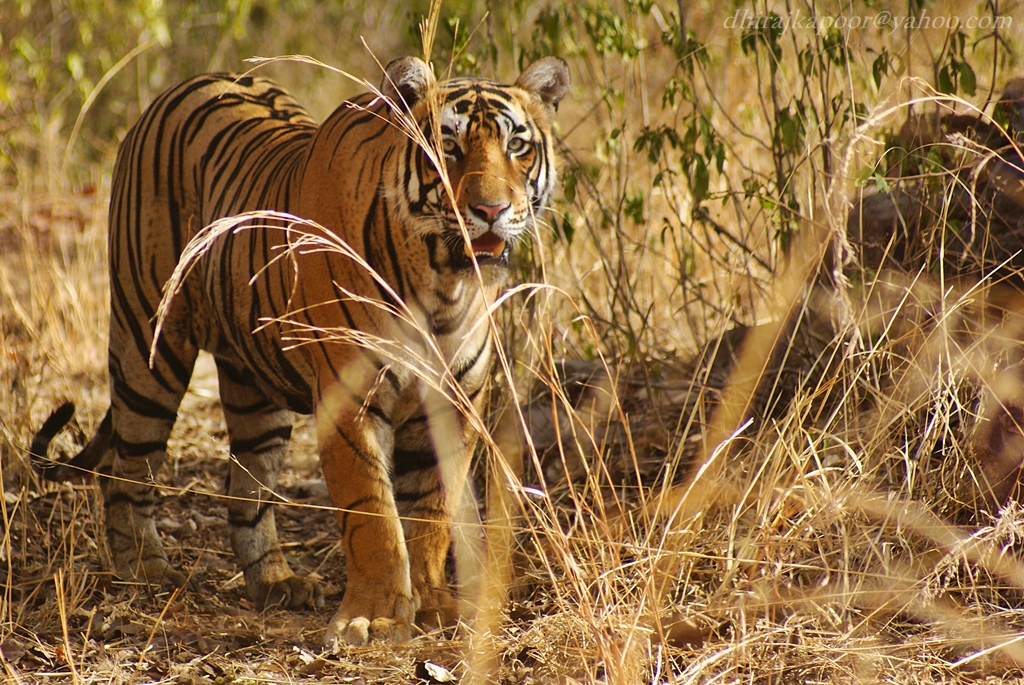 He continued to walk straight towards us and we had to slowly back off, who were we to challenge a hungry power house of a predator 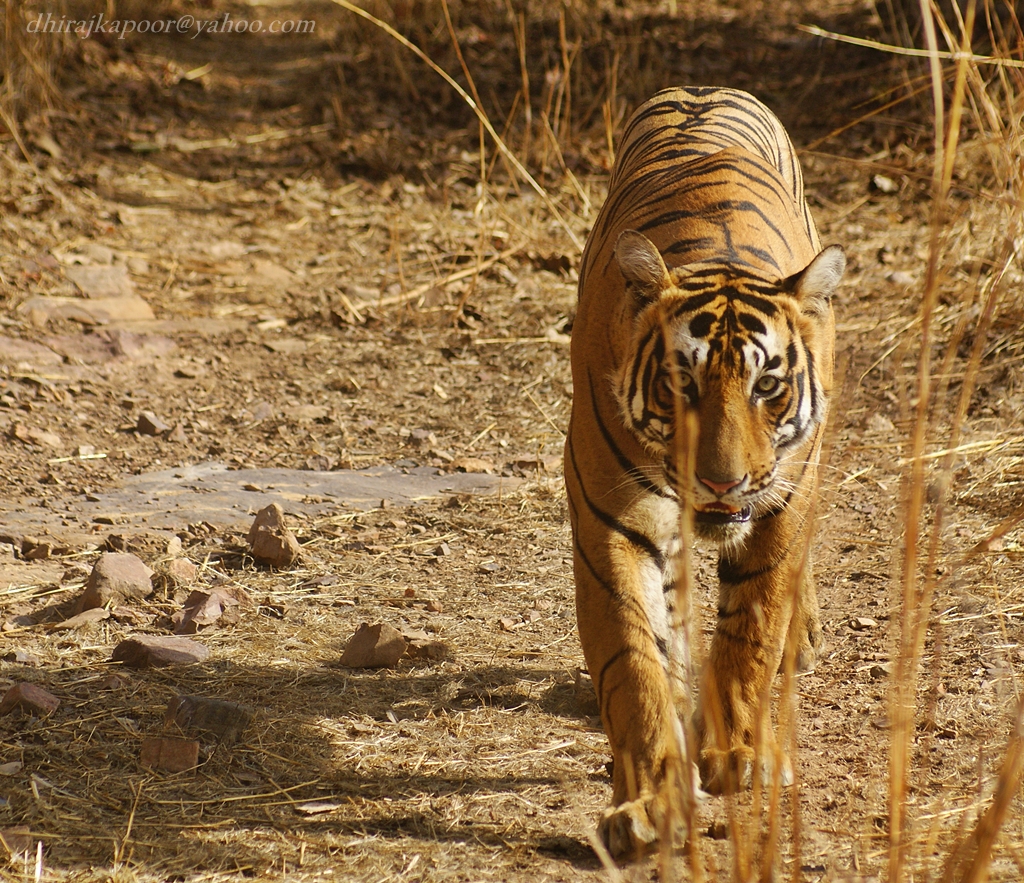 Its the eye contact that sends shivers down the spine!! 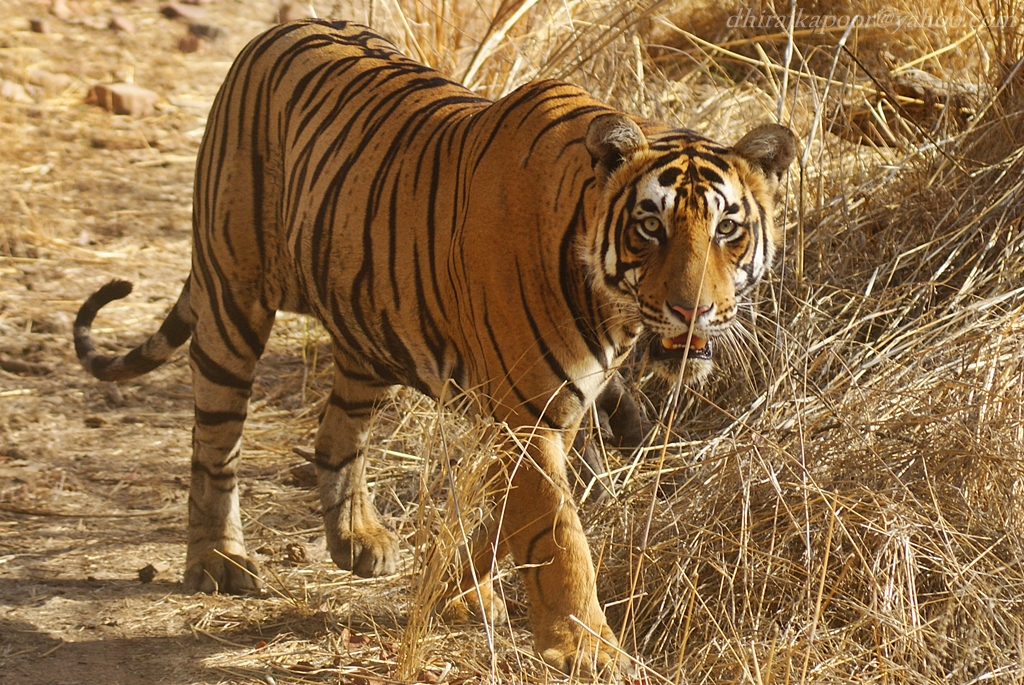 Somehow we managed to give way to Pacman on the narrow track. Luckily we were the only vehicle there so that also helped in maneuvering. Also Pacman made it easy for us by going a bit off track. Now that he was behind us we reversed and started following him. 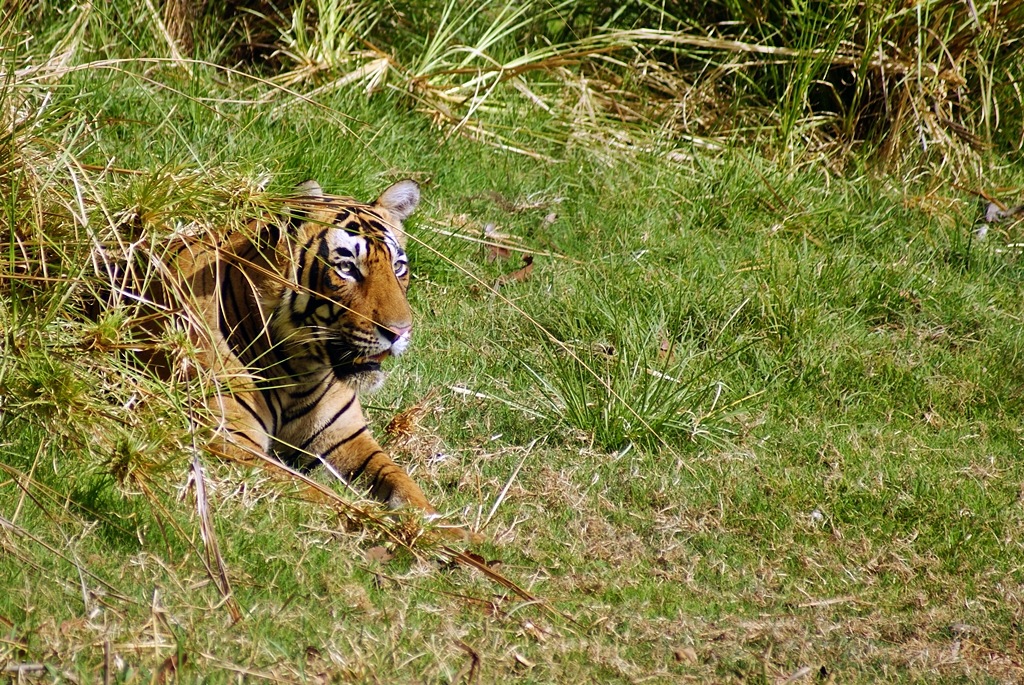 But I guess, he had other things in mind too. Maybe he wanted to give us more photo opportunities so he again started to walk straight towards us. 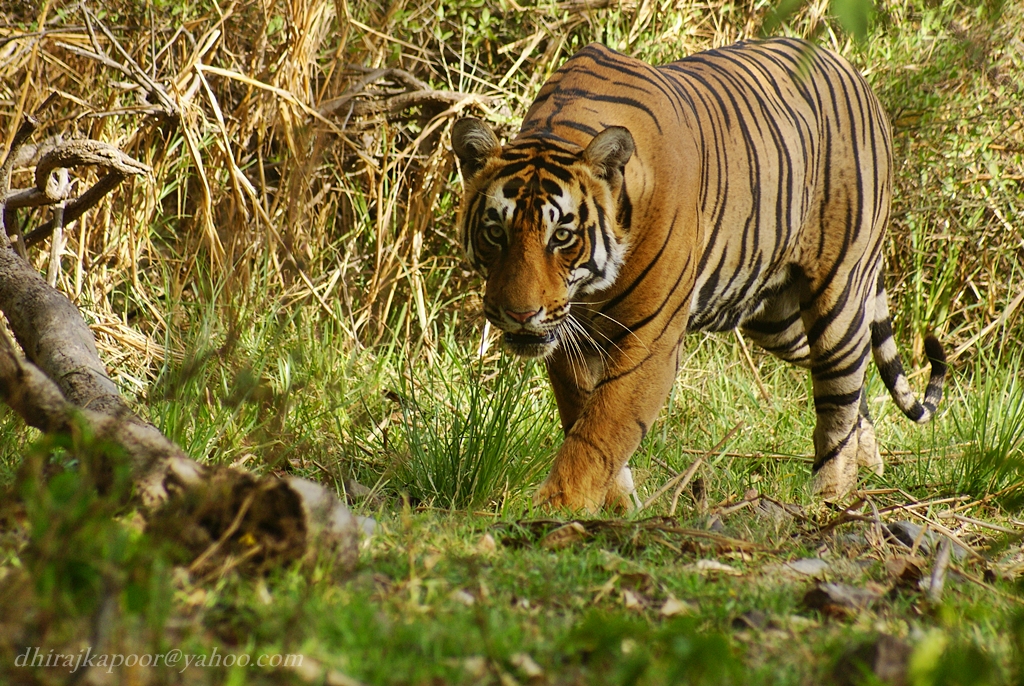 If he would have got any closer, I am sure he could have heard my heart beat and realised that I was really getting scared now. But luckily he decided to sit down. 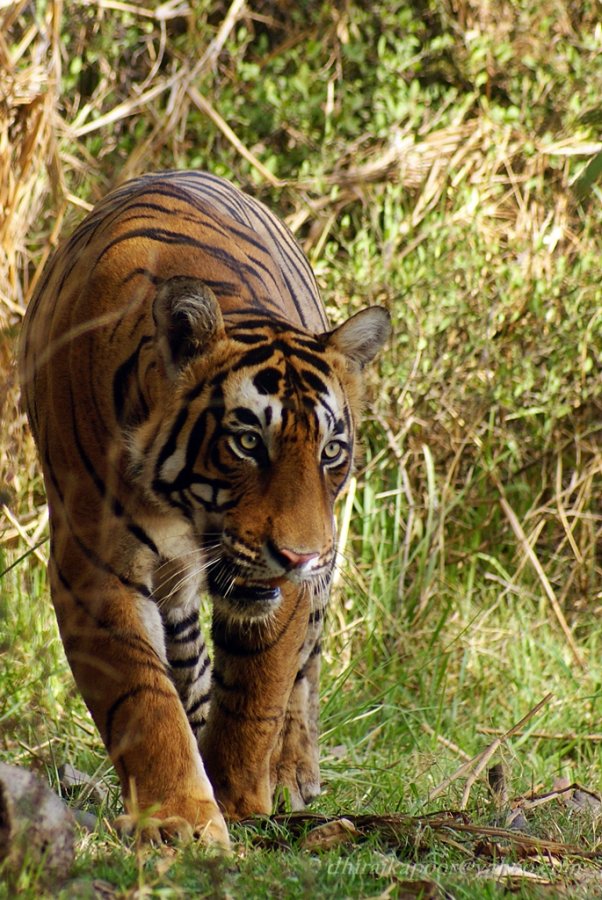 It was approaching 0900 hrs and it was getting really hot. Any shade was most welcome 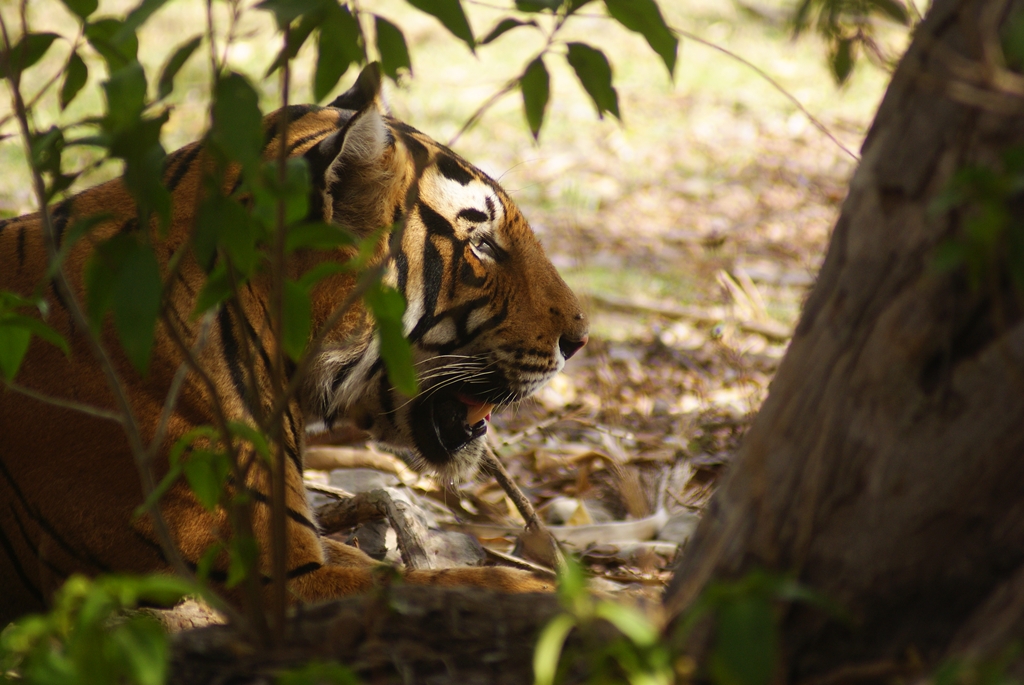 Shade and water is what the tigers relish the most 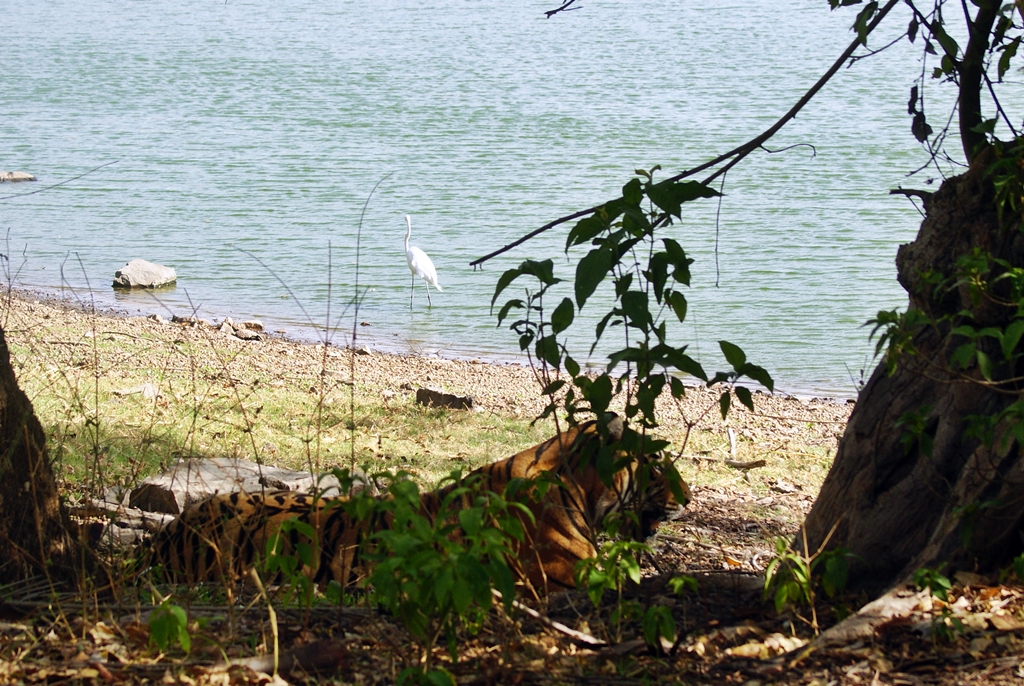 Apparently, at RTR, a young tigress (T60) has lost one of her canines. So this photo gave us a good opportunity to find out that Pacman's canines are intact 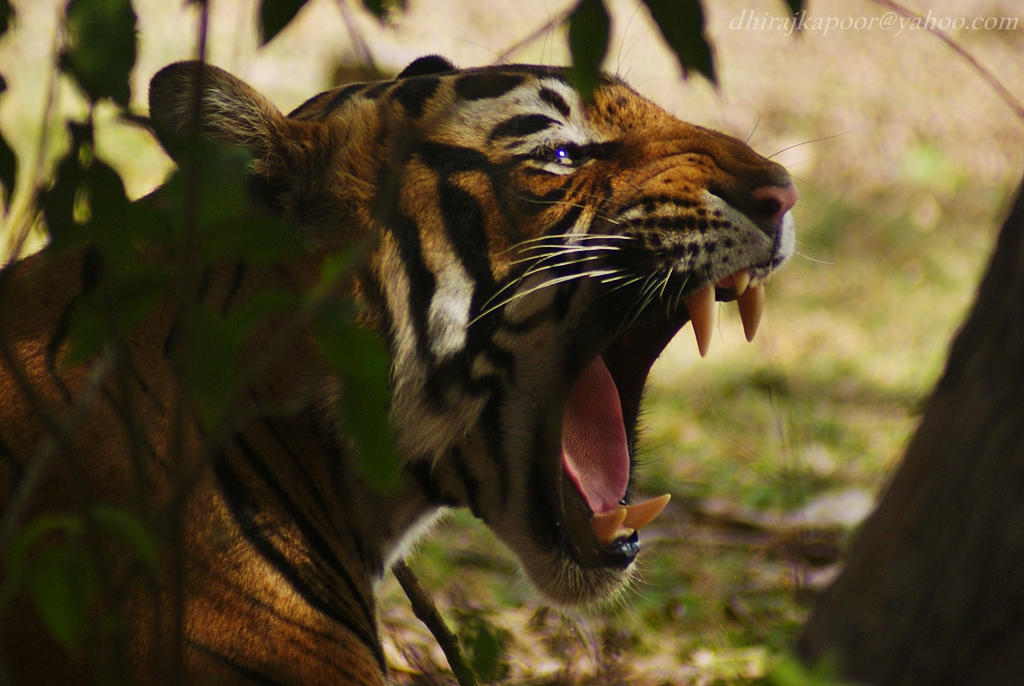 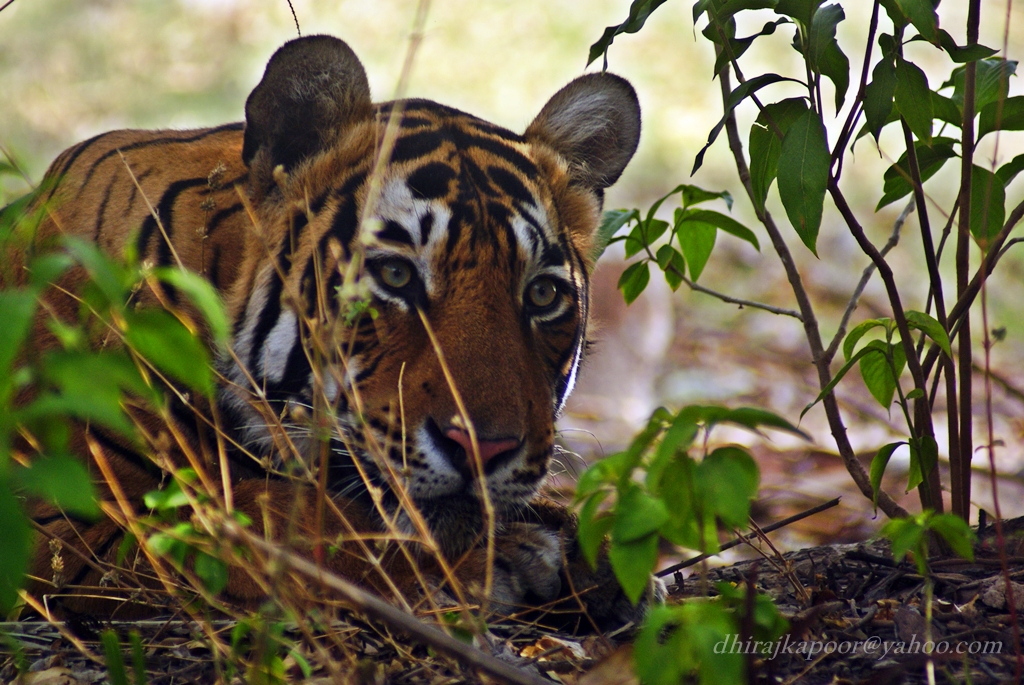 Then again Pacman stood up, walked a few feet and came out in the open and sat right in front of us. I think this would have been the pose that would have inspired all those tiger stuff toys!! 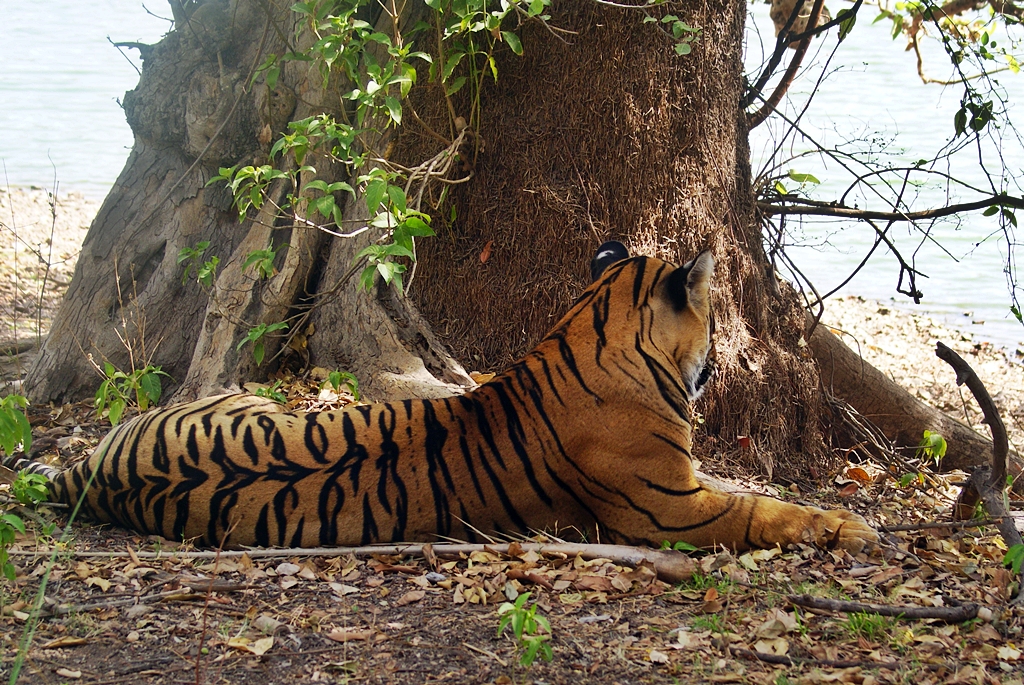 But we didnt have much time left for our safari to end. It was 0915hrs already and we had only 15 mnts left to be out. Though the drive to the exit was only 5 minutes away but we decided to leave Pacman to his own and drove out.

We reached the hotel freshened up, had breakfast and left for our respective homes. By 1300 hrs I was back at Jaipur.

This bought to an end to another successful trip to RTR. 5 different tigers in 2 safari's, well, I couldnt have asked for more.

DKay said:
Doesnt Munna have CAT markings on his forehead?
Click to expand...

That's exactly what I am trying to point out Dkay.
The forehead markings of Munna and Pacman are very similar if not exactly identical.
Posting two images below just to explain better.
(The Munna image is downloaded from the net , whereas the Pacman image is from your last post in this thread.) 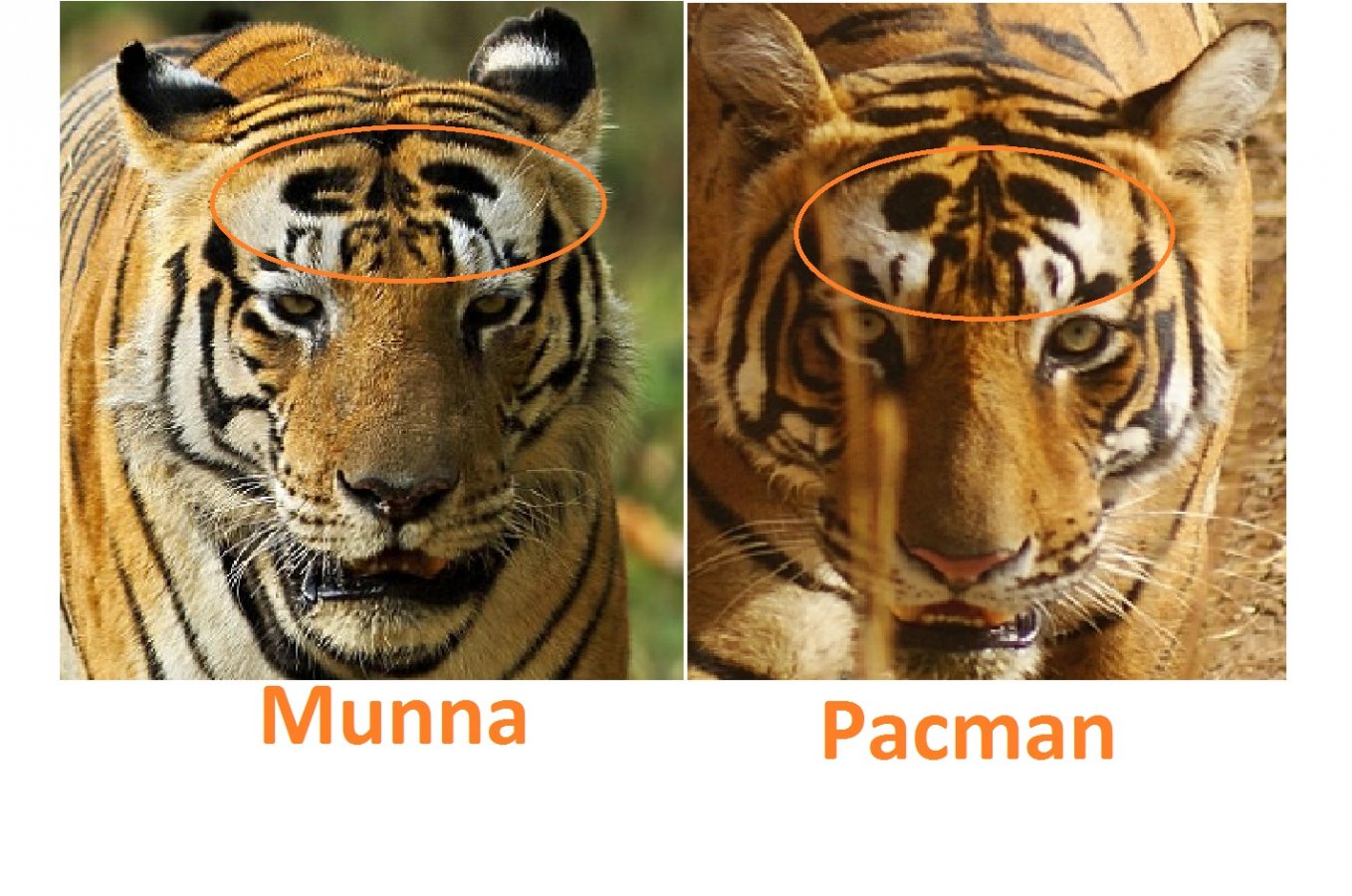 Shantanu Roy said:
That's exactly what I am trying to point out Dkay.
The forehead markings of Munna and Pacman are very similar if not exactly identical.
Posting two images below just to explain better.
By the way excellent images again!!
Click to expand...

Yeah you are right, they are indeed pretty similar. Thanks for noticing this

My Friends and I decided to visit Ranthambhore before the park shuts down for the monsoons. My friends were from Bangalore and from Delhi and had already reached Sawai Madhopur on 17th June by afternoon, where as due to some prior commitment I could only join them from 18th morning safari onwards. We still had 3 safari's left and all the safari's were booked in zone 3. I started from Jaipur home at 0300 hrs and was in Ranthambhore at 0545 hrs, just in time before the morning safari starts at 0600 hrs.

Zone 3 is the most sought after zone in Ranthambhore. It has T19 and its sub adult cubs. The cubs are mostly independent now but still roam around zone 3 and some times venturing into zone 4 also. T19, these days is hardly visible as some say she might be pregnant again and should be ready to deliver. During such time, tigress's usually limit their area. I have seen T19 and her cubs a multiple times and if I had a choice I would have opted for a different zone, but a couple of my friends had never seen a tiger before, hence we decided to stick to zone 3 as the sighting is more or less gauranteed here.

But this morning, it was not meant to be!! It had rained during the night and the resulting weather ensured that tiger movement was very limited. Through out the safari, there was no alarm calls or no other reports of tiger sightings. Not just in our zone but in most of the other zones also the tiger sightings were very less.

Though it was definitely a disappointment, but we still had to safaris to look forward too.

Well, if not tigers, I decided to go click my latest found passion, and that is some birds

Though Partridges are very common on the ground, but it was nice to see this pair, perched on a fallen tree trunk, higher than my eye level 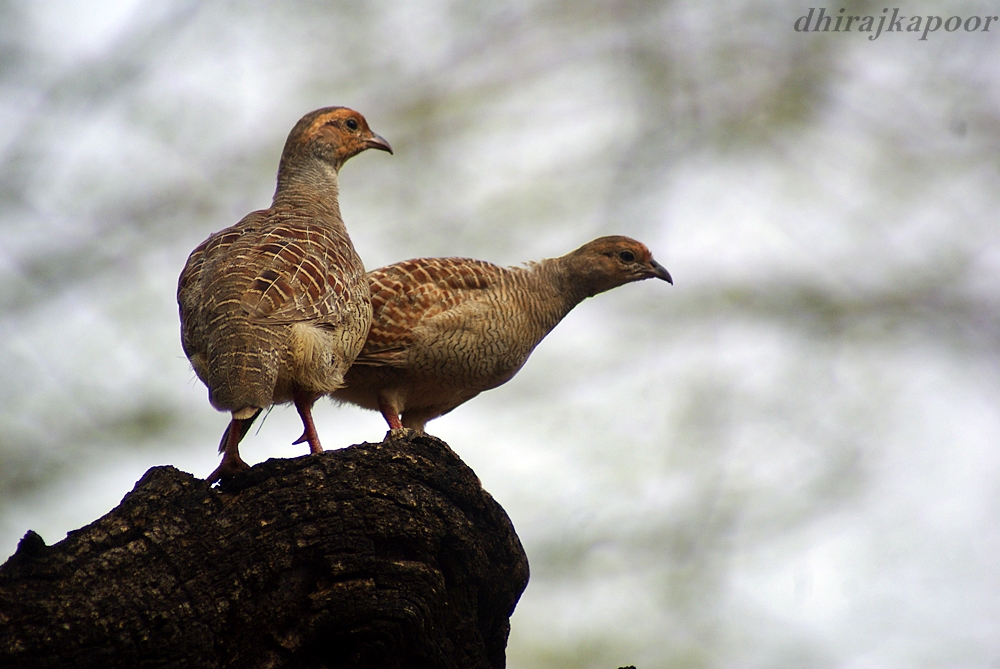 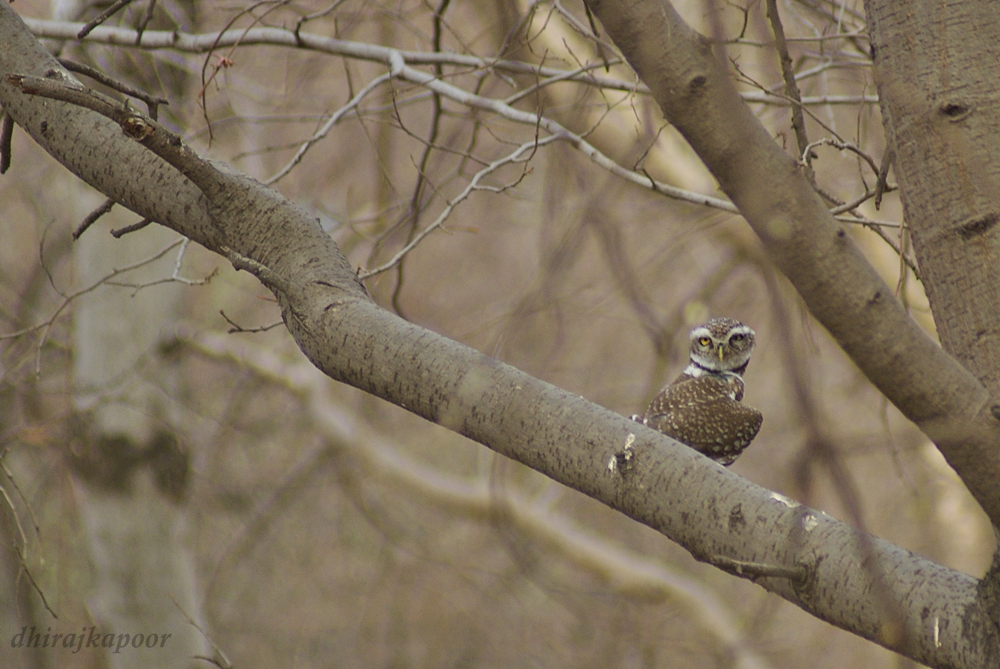 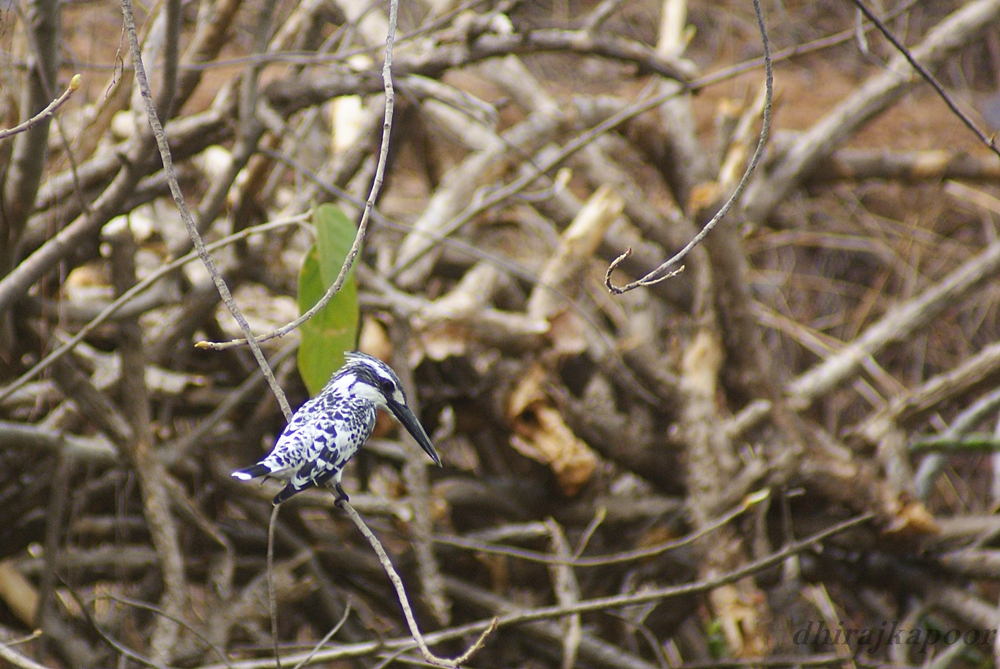 But again, at least I got two birds that were on my wish list for the month.

Indian Pita : One of the most beautiful birds and with a beautifull whistling sound 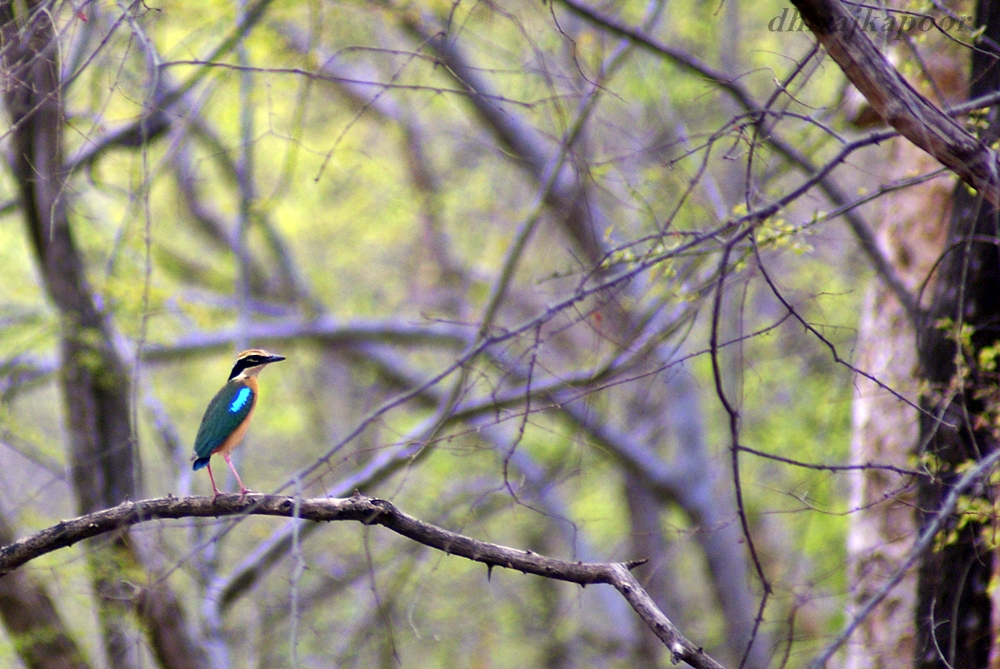 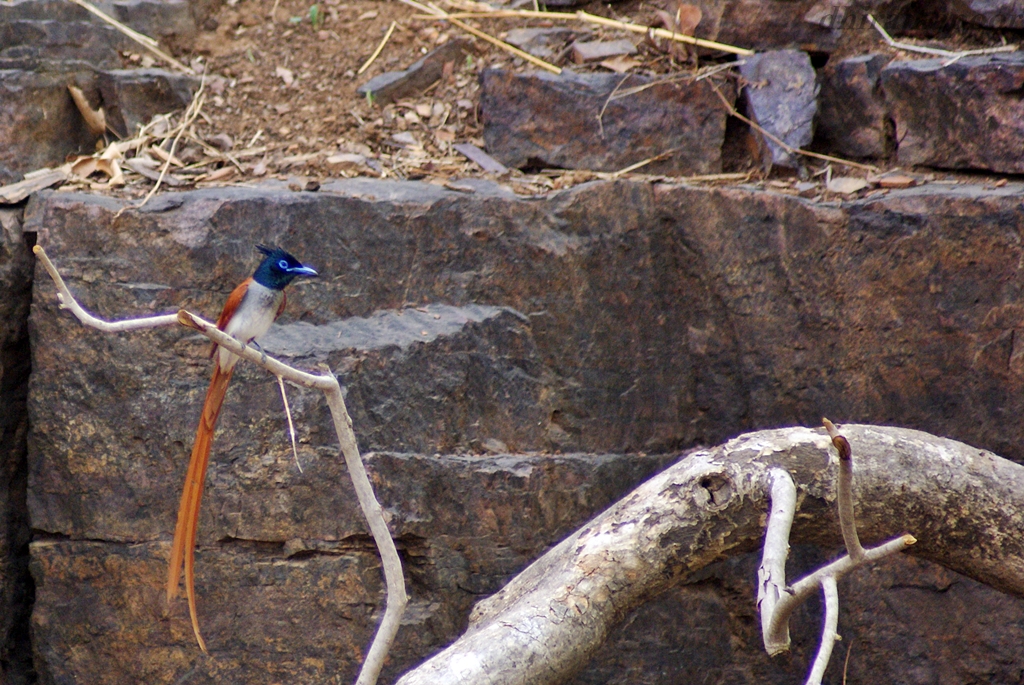 Fantastic!! By the way did you change equipment?
D

Shantanu Roy said:
Fantastic!! By the way did you change equipment?
Click to expand...