I know, I have seen loads of tigers but this had been the scariest of all the experiences
D

It was the last day before the parks close on account of monsoons. I couldn't resist and had to go for one last visit as the next visit will only happen after three months. So decided to do one morning and one evening safari. As usual, Ranthambhore never disappoints

Now without adding much text, I will only post pictures this time.

Because of pre monsoons showers, there was small puddles of water all over. But the rain showers and the sun made it very humid and sweltering.

A pair Of Indian Pitta quenching their thirst 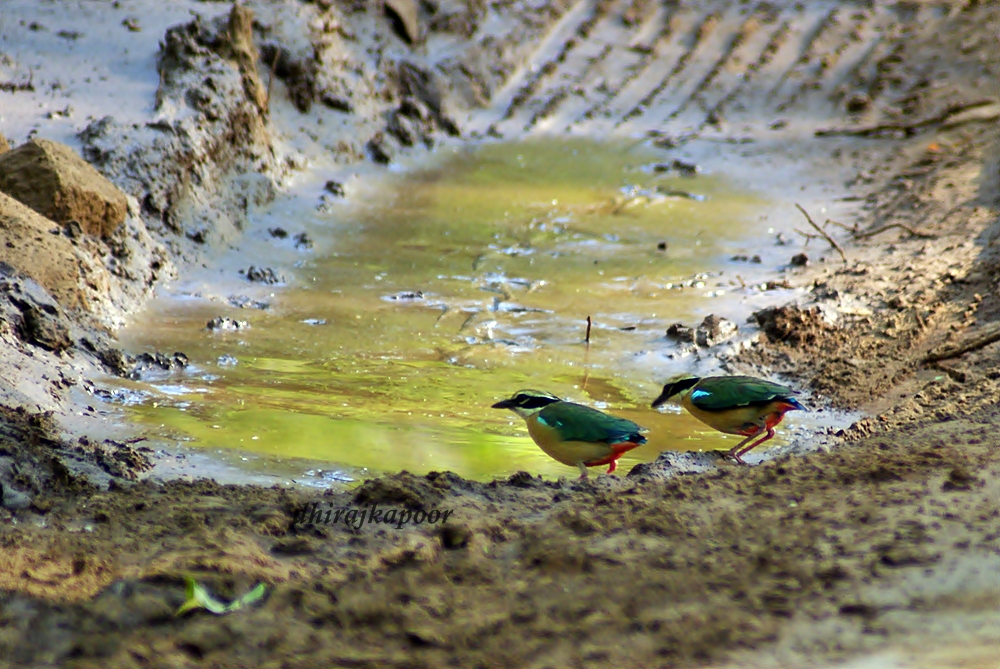 A monitor lizard in a hollow tree trunk 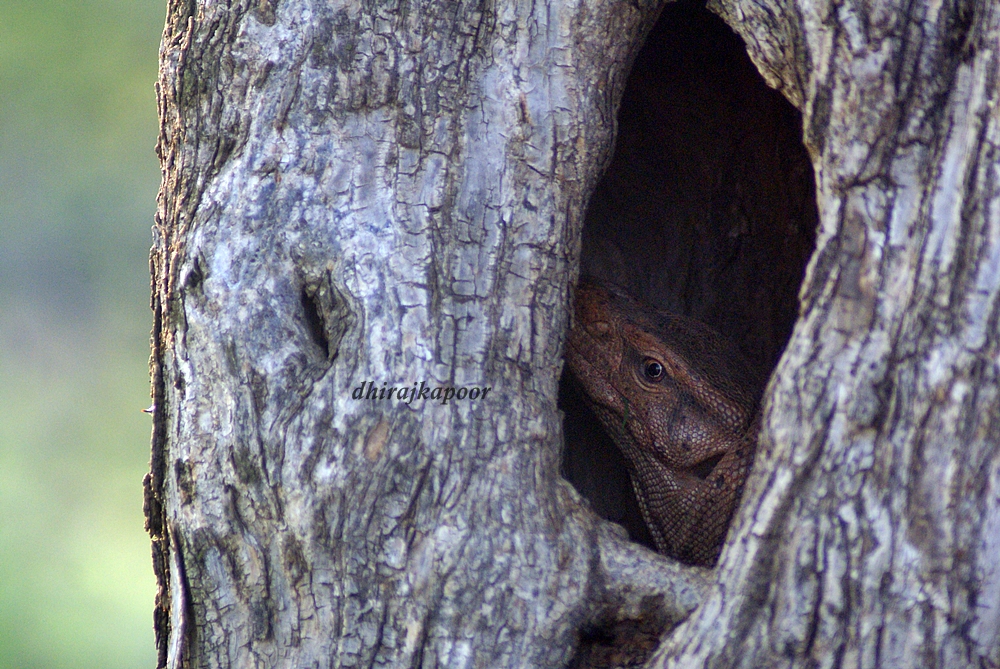 First tiger for the morning was T83, apparently she had made a kill and was resting. We couldnt see much of her as she was behind a wall of stones but still, it was a great start. 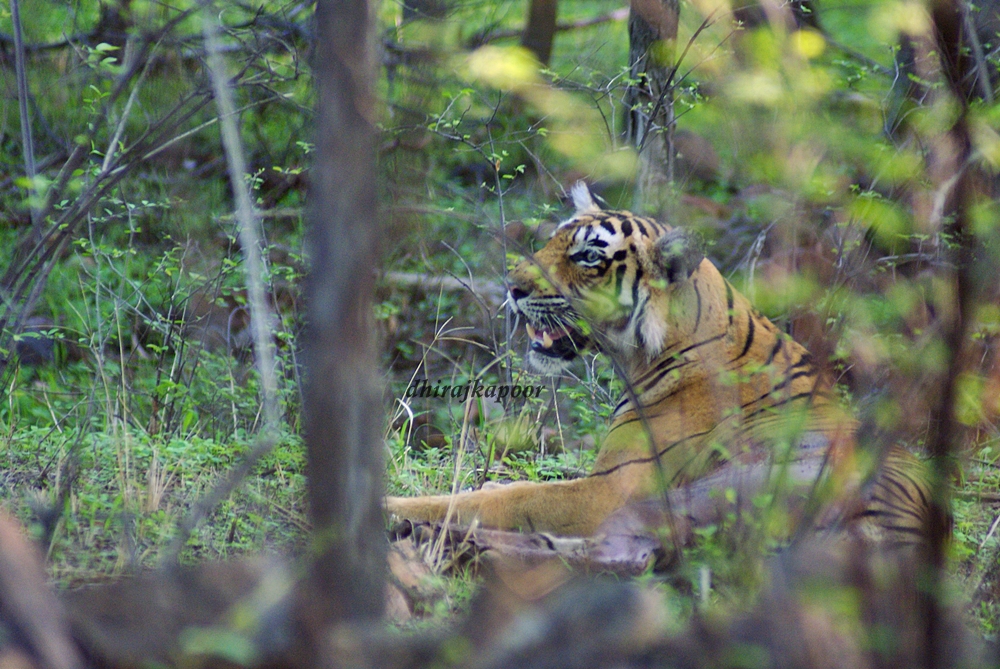 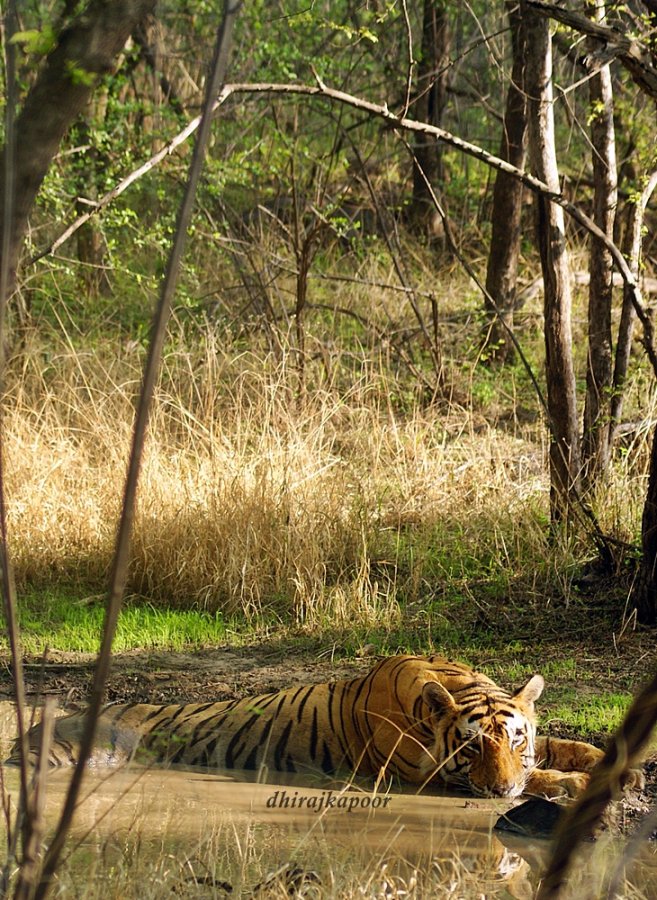 He would get up from time to time to look at us and have a drink. 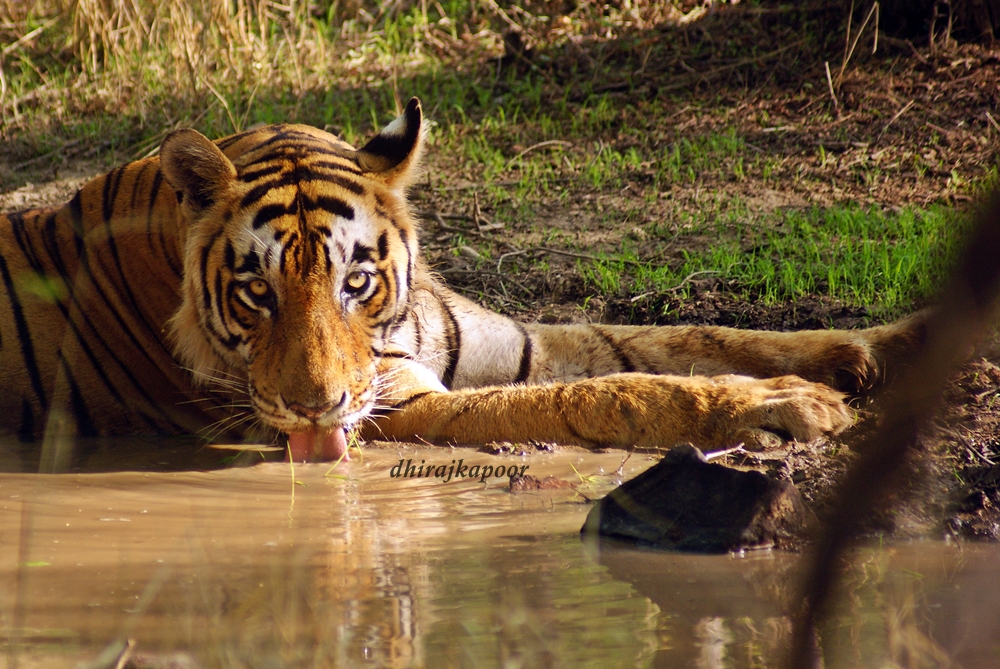 After a while he get up, and he was on the move marking his territory to claim his area. 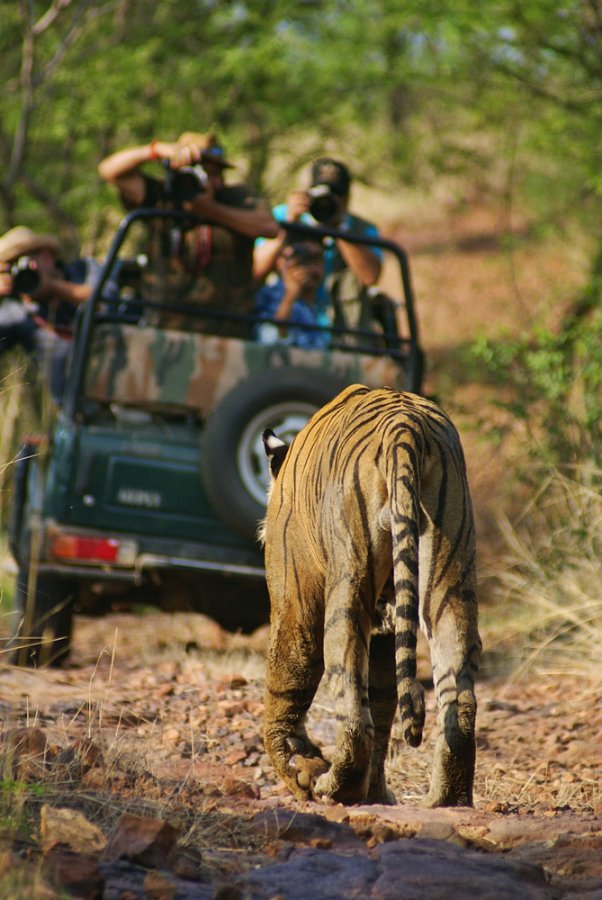 Infact the previous day a new male, Id T91 had entered his area and apparently 28 and 91 had a small skirmish too. As seen in the below pic, T28 had a small scar on his cheek from that 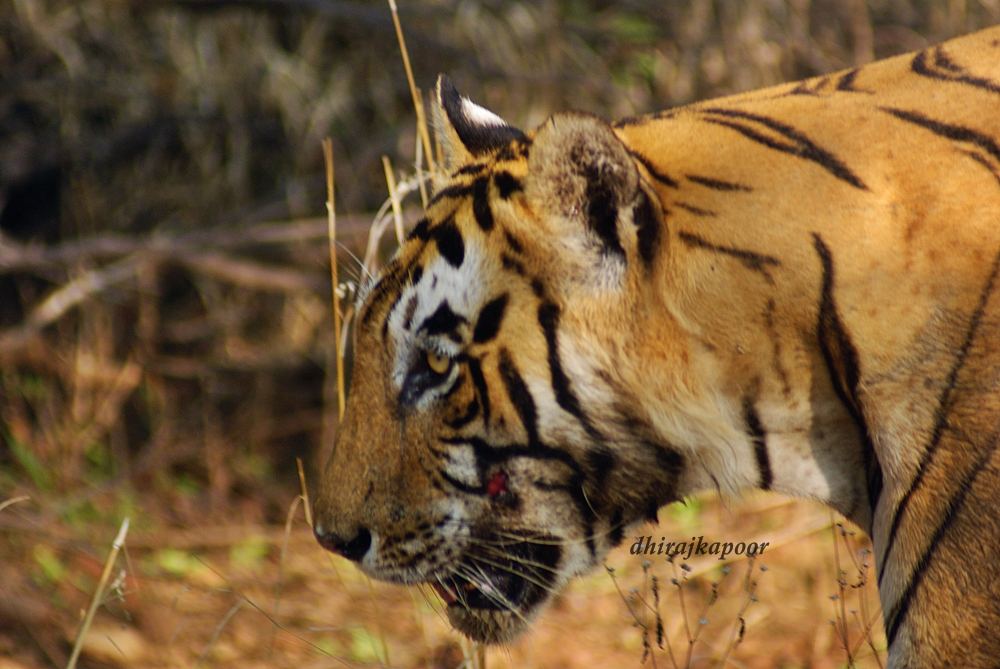 Apart from marking the area by urinating, tigers also scratch on trees to reclaim their territory. 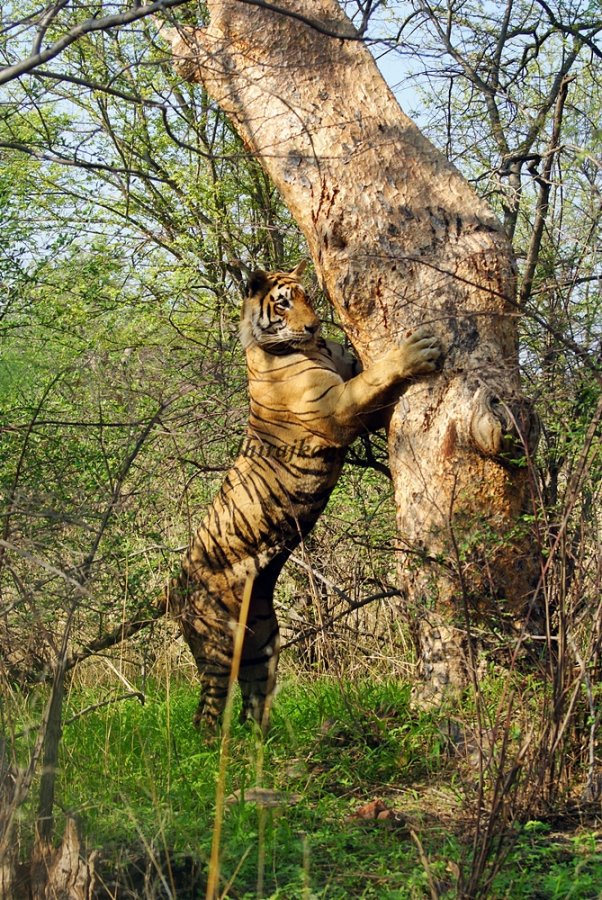 Here is the sequence of climbing up on a tree 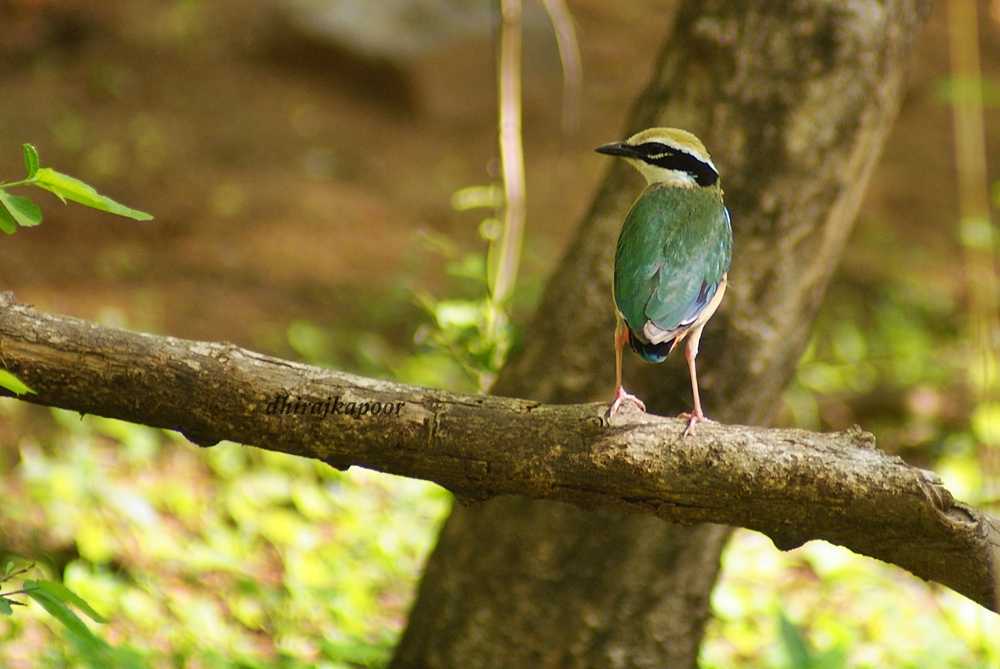 It was getting rather too hot, so T28 found another water hole and finally decided to call it a day and slept off 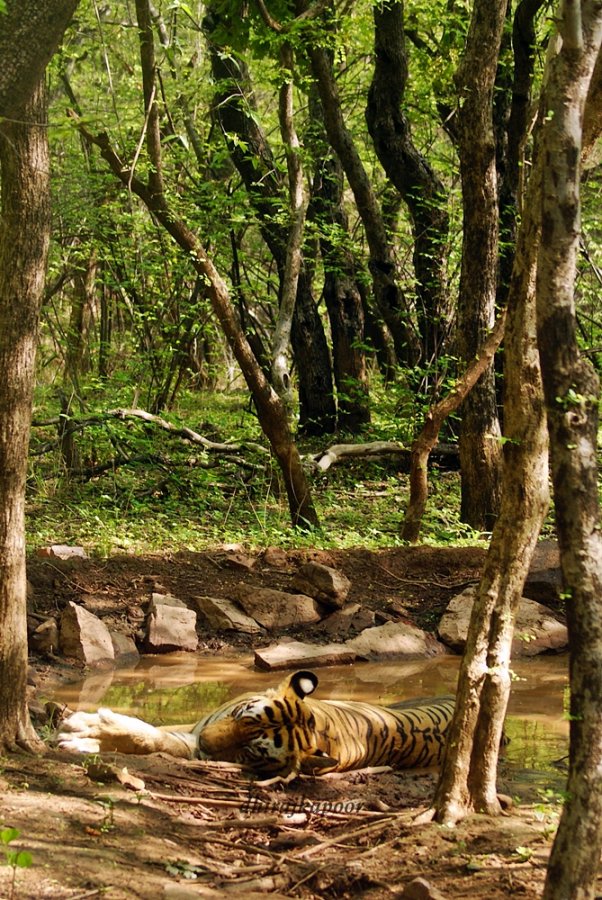 On our way out we decided to check out T83 again, she was on her kill eating it peacefully 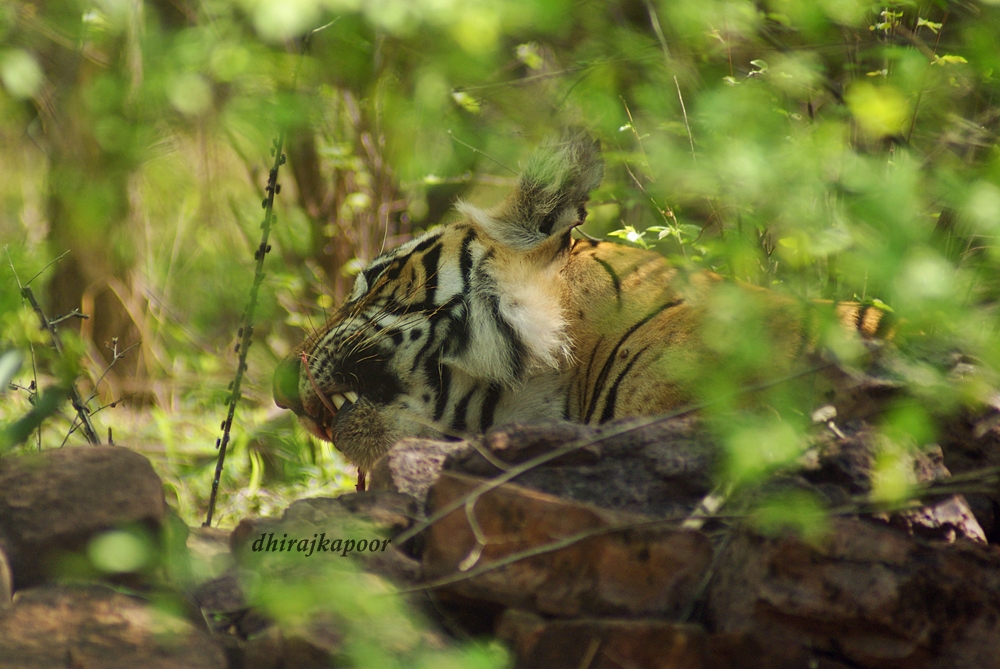 Our time was up and we moved out.

Wonderful updates. Thank you for your encouraging words.

dkay, the pics took my breath away, bravo....
D

subratseet said:
Wonderful updates. Thank you for your encouraging words.
Click to expand...


kdacharya said:
dkay, the pics took my breath away, bravo....
Click to expand...

Thanks for all the encouragement KD!!
D

This was the last safari before the parks shut down for a period of 3 months. We had specifically asked for zone 4. After some pleading and using some contacts we did manage to get the zone allotted. I was specially keen on zone 2 as the resident tigress T60 there had birth to 3 cubs. The three cubs were now about 6 months old and I had never seen cubs that young. On my previous visits, though I had seen T60 the mother, but had always missed seeing the cubs. So this was the last chance, before the cubs grow up more in those 3 months and start looking like adults.

When we started our evening safari, we already knew that another tigress, T39, had made a kill in the same zone. We decided we shall go and check her out first and then proceed in search of T60 and cubs. We reached the area where the kill was made and we could see the kill but there was no tiger. We were told that the T39 was laying in water a few meters away from the kill, at a place where we could not see her. The angle was such that only one vehicle could get a glimpse of her. We had to decide whether to wait for her or to move on and look for T60. A few minutes passed and more and more vehicles had arrived by then. The wait was getting unbearably long and painful, especially because, my heart was set on T60.

I coaxed and managed to convince my safari mates to get out of this melee and we moved on.

We surely were not disappointed as, as we reached the place where T60 loves the most, we saw her there sitting.
She was alone, but she was attentive and that meant the cubs were around 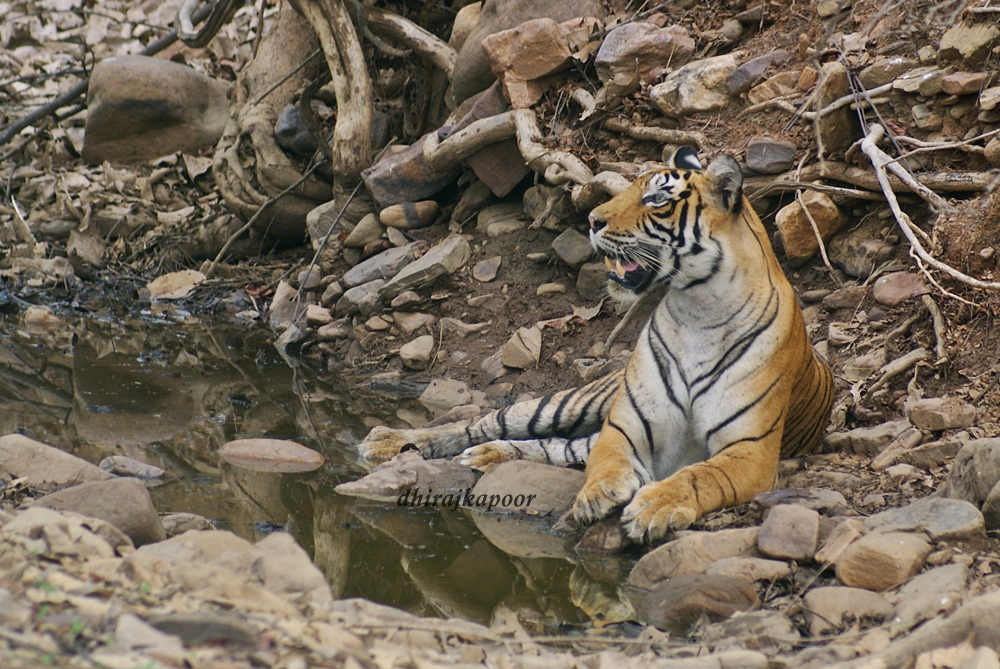 Soon she growls softly and calls for her cubs. Most probably the cubs went into hiding when the heard a vehicle approaching.

One cub, comes out of the bushes and goes straight to the mother and gets some loving. 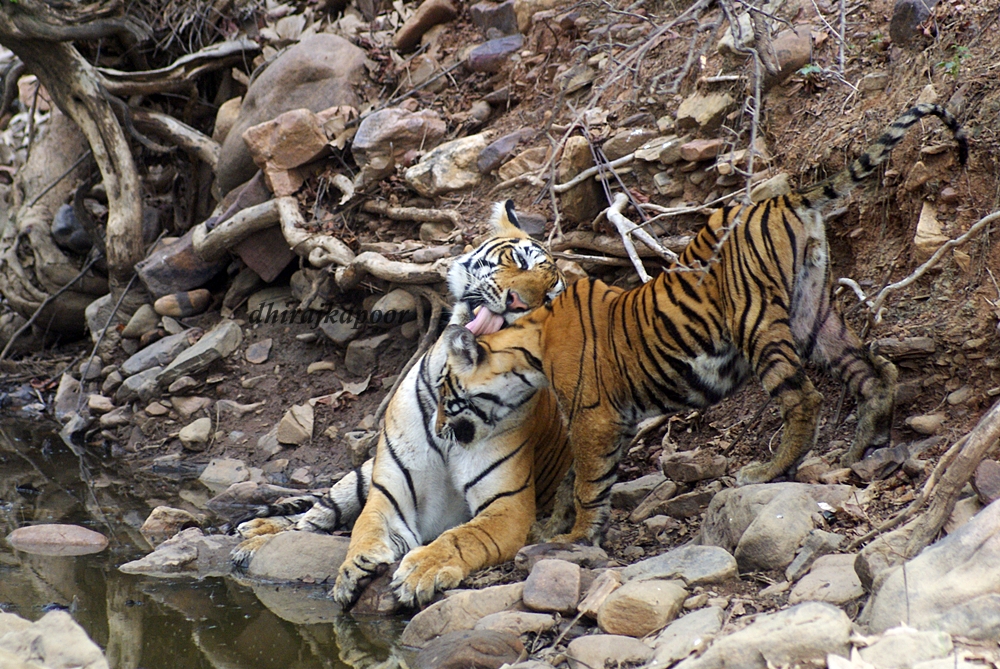 After some loving from his Mom, he climbs up and settles on a tree trunk 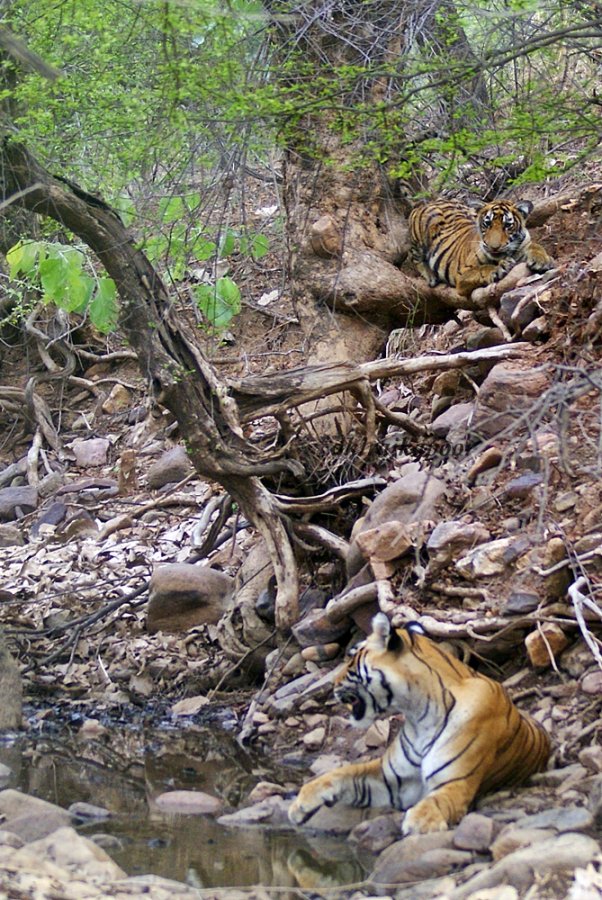 Cub resting on a tree trunk 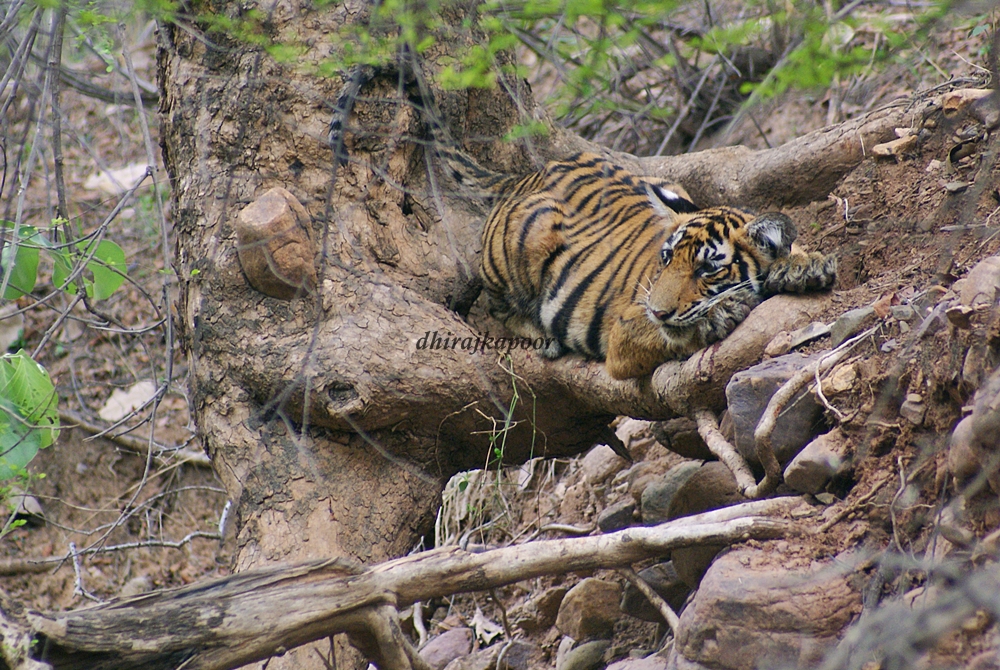 It takes some time for the second cub to appear 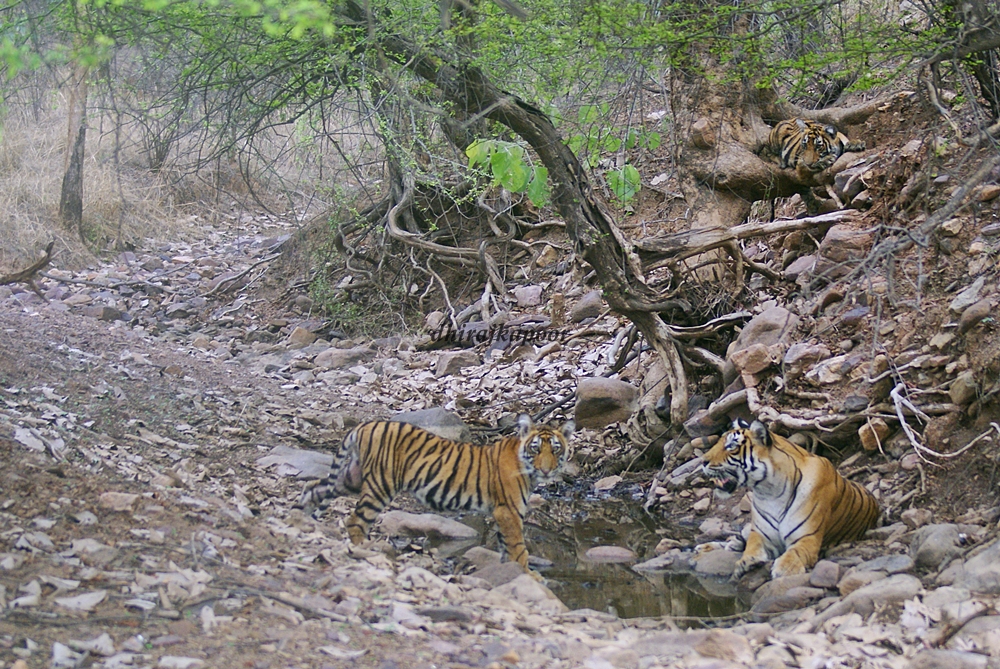 He gets the look from his Mom, as if being told off for being late. 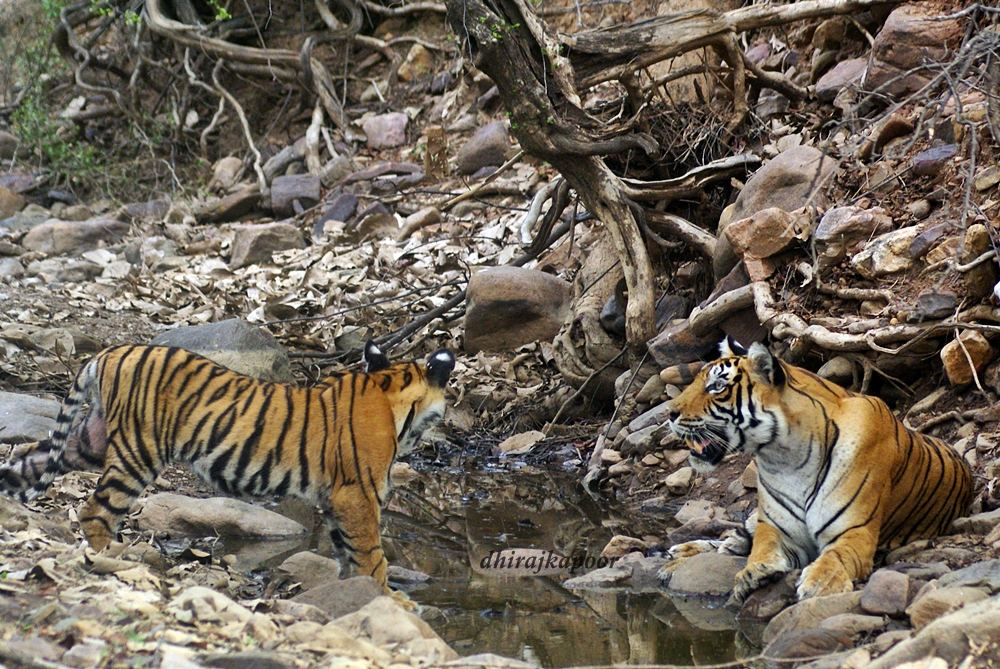 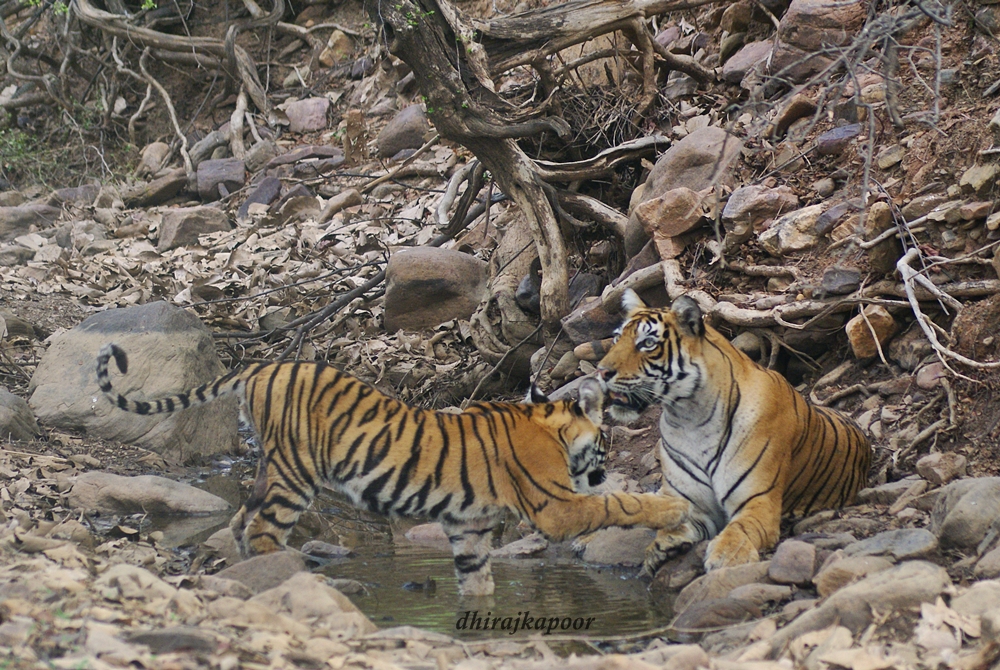 Suddenly, something spooks all three of them. They must have heard vehicle noises approaching

Cub 2 moves towards his brother 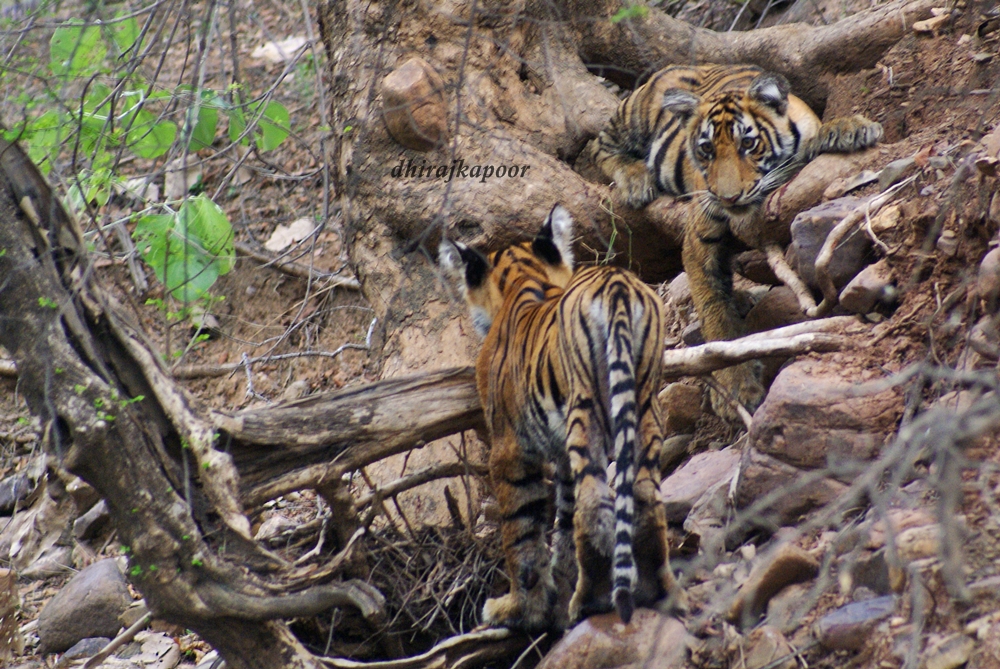 All three in a frame makes a good family pic. Apparently the third cub, a female, is very shy, she hardly hangs out with the family 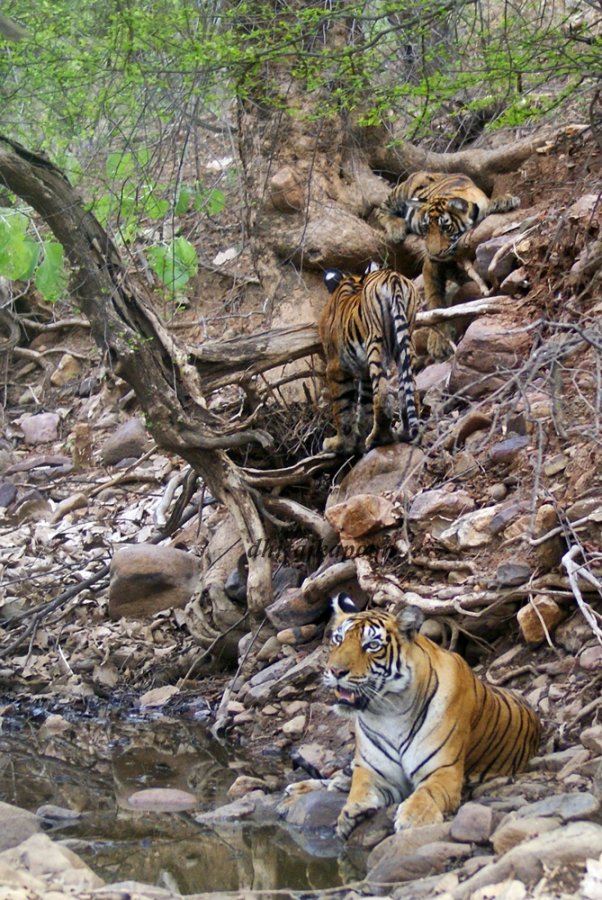 As more vehicles appear, Mom decides that its for the best that they make an exit. She gets up to leave. 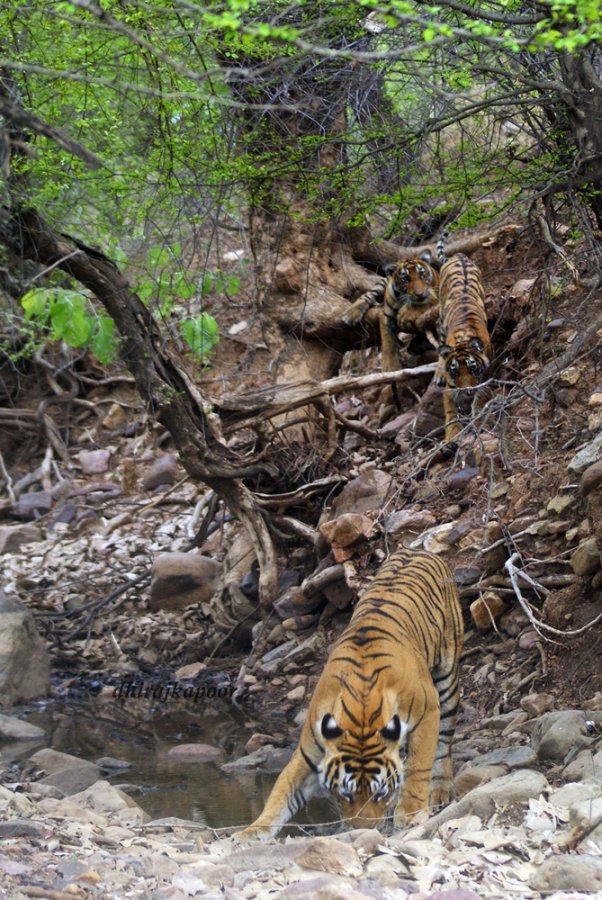 Evening safari to be continued..

Fantastic!! Three tigers in a frame is still a distant dream for people like me.

You are becoming another Tiger man and Ranthambhore specialist like late GD Sir.

Thanks for the shower of pics.
D

Shantanu Roy said:
Fantastic!! Three tigers in a frame is still a distant dream for people like me.

You are becoming another Tiger man and Ranthambhore specialist like late GD Sir.

Thanks for the shower of pics.
Click to expand...

GD sir was and is a Legend, I am no where as close to what GD Sir was. His passion and in depth knowledge of the tigers is exemplary. But still, Thank you for your kind words.
I have had 4 tigers in a frame many a times but, the following pic that I clicked, will remain my all time favorite... 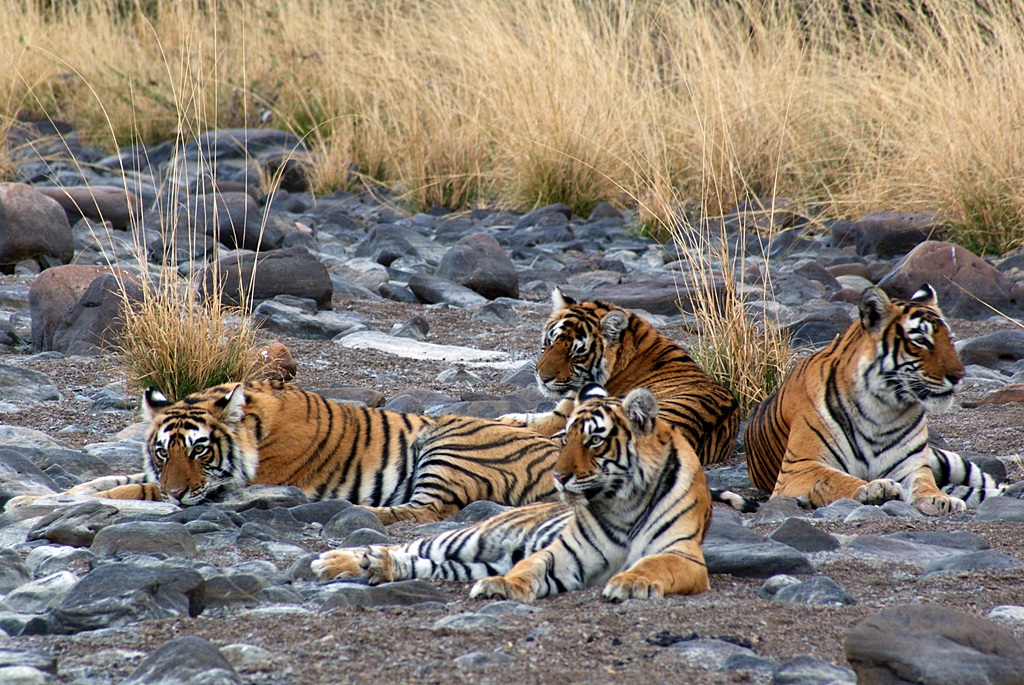