Reflections on Driving Addictions "Bangalore to Spiti and Changthang"

First views of the Rohtang Mess. 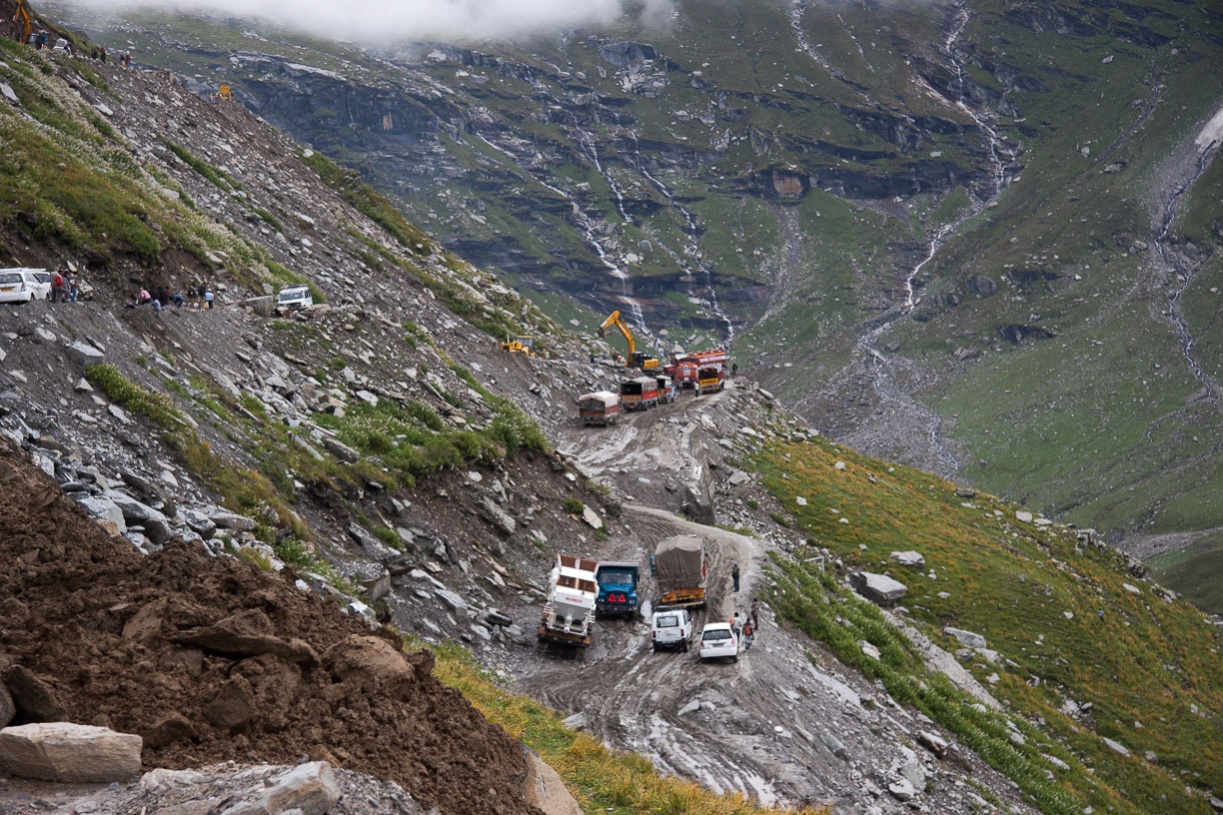 Rohtang was bad. But not as bad as it had been for our mates in the Bolero. It had not rained for the last 24 hours so the slush was a little less slushy.The skies though had clouds, however the visibility at the road was excellent. There was little traffic and most of the trucks were parked on the road side though there were a few tourist vehicles and a couple of public transport buses. We crossed over slowly, there were waits where the traffic was jammed or the Dozers were clearing a minor landslide or packing the slush by depositing drier mud on these parts of the road.
We crossed over without any mishap into the waiting carnage of Day Tourists from Manali after Rohtang La and around Marhi.
The slow moving traffic and the mud roads at Rohtang. 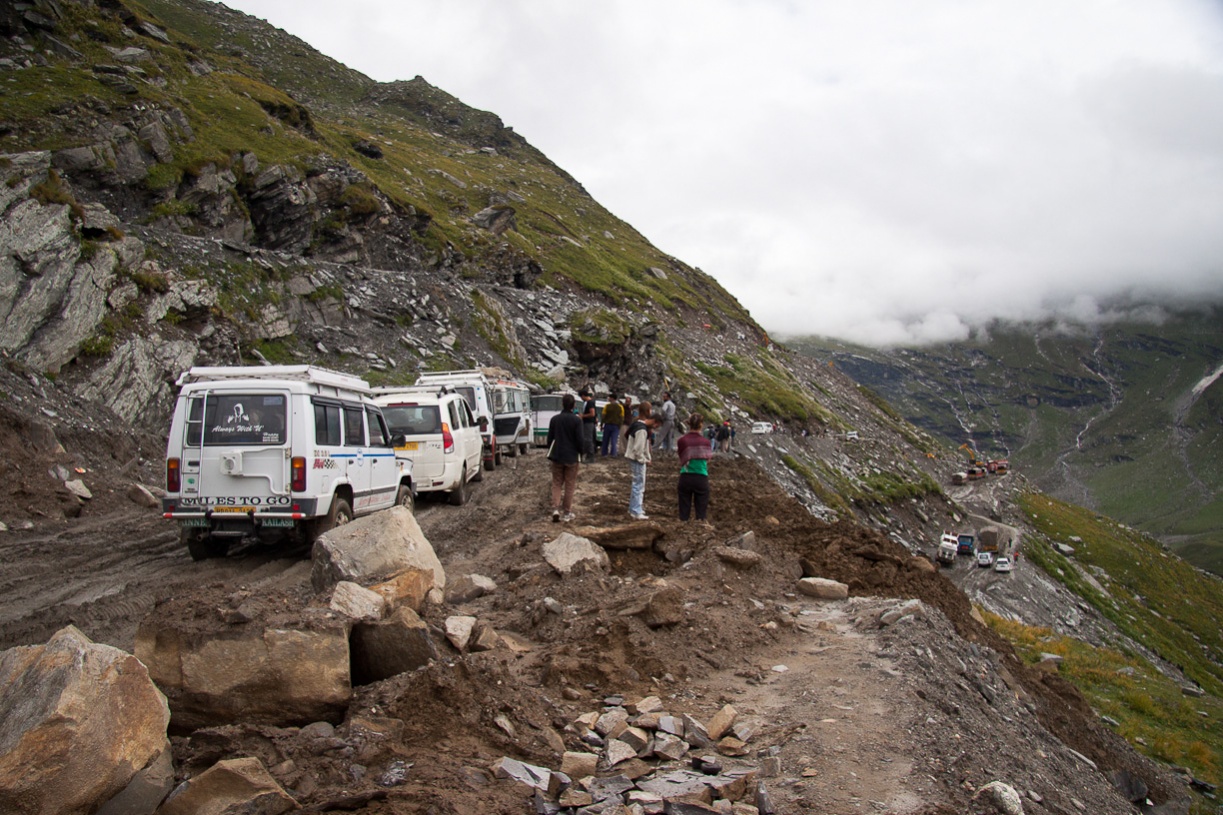 That's Marhi and what I could identify as the PWD Guest House. 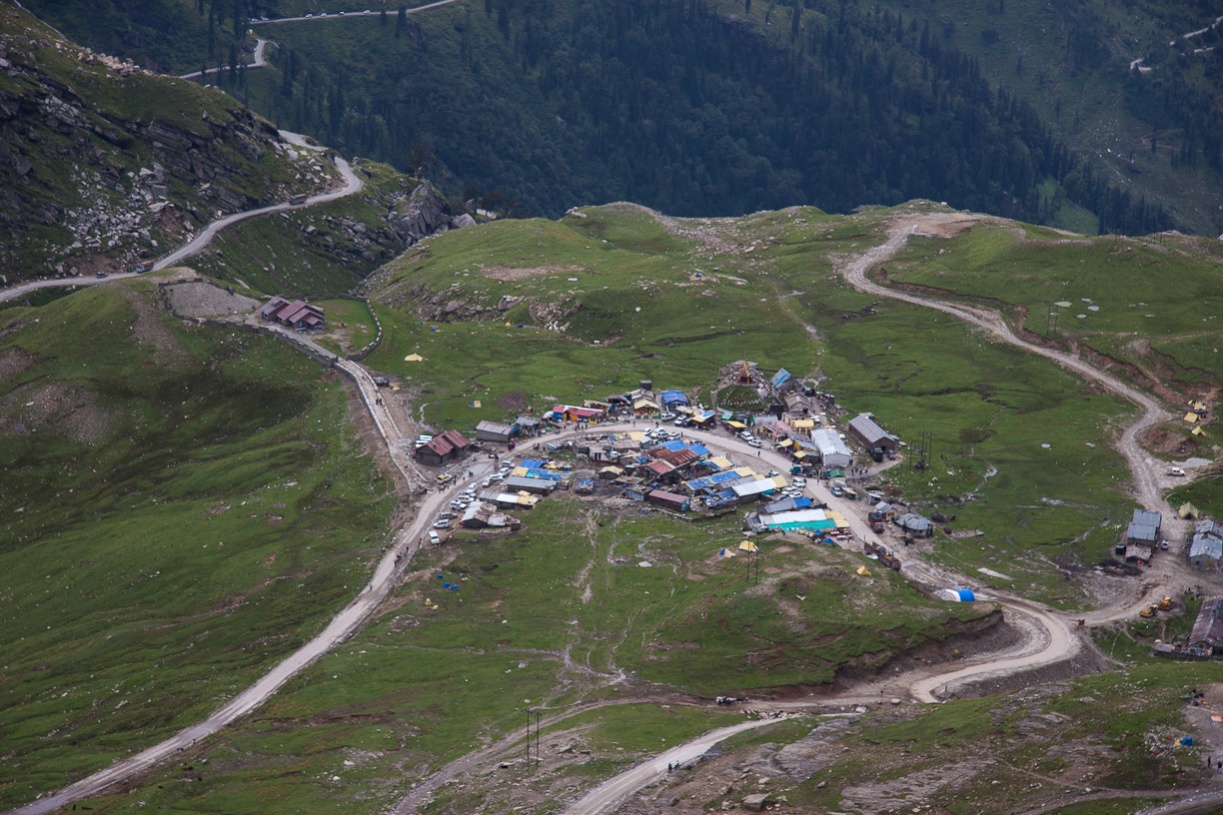 Looking at the roads the squiggly zig-zags on Google maps in this area make sudden sense. 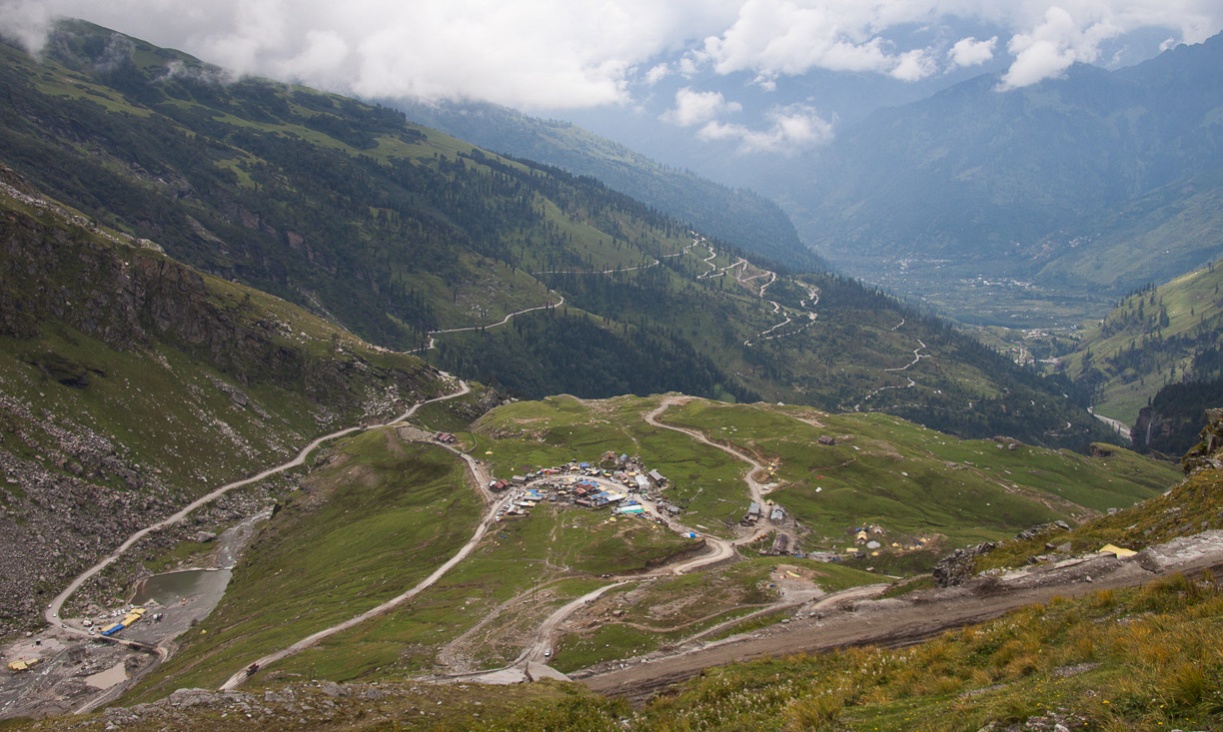 The slush was only about 6" deep and quiet firm under that, even then we had the low slung vehicles such as Innova and a few DL Registered Sedans getting stuck regularly. The two wheel drive vehicles had to make it through on sheer momentum.
The Tourist in the window! 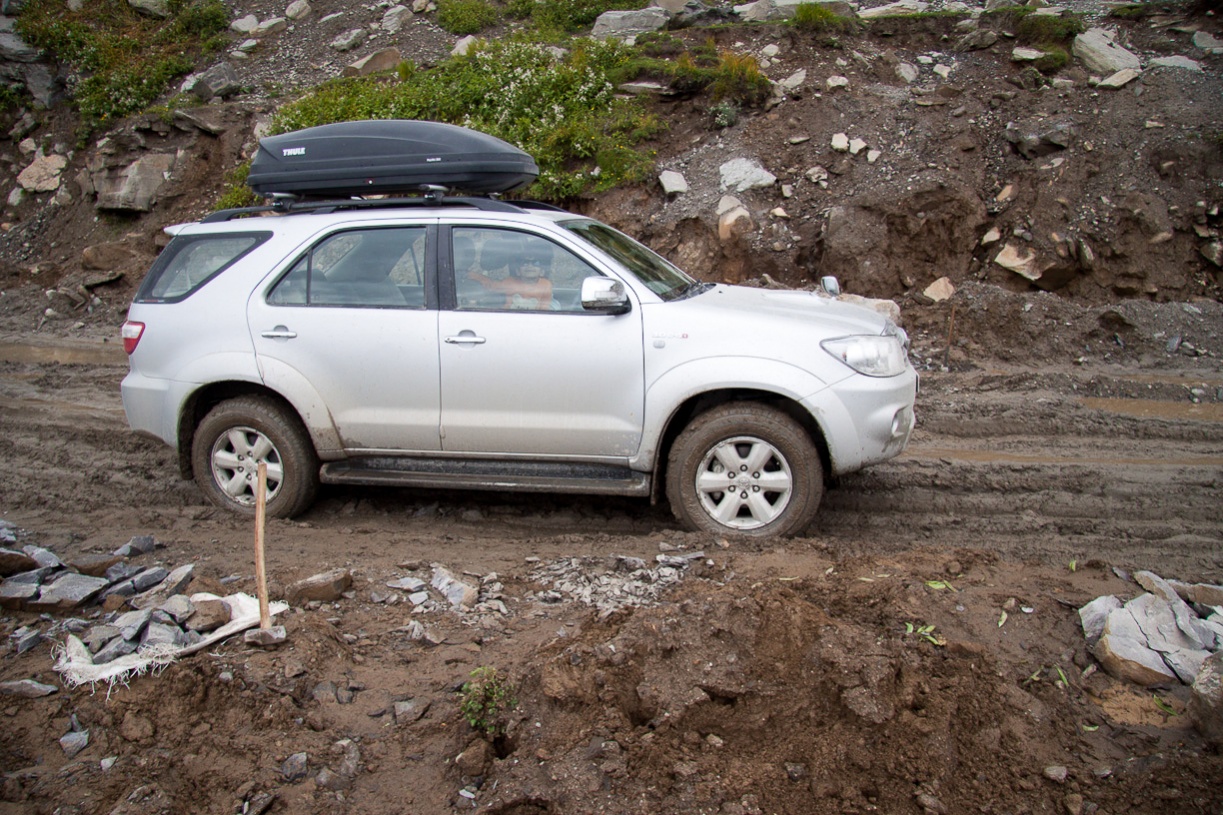 The mess on the roads contrasted with the beautiful surroundings. 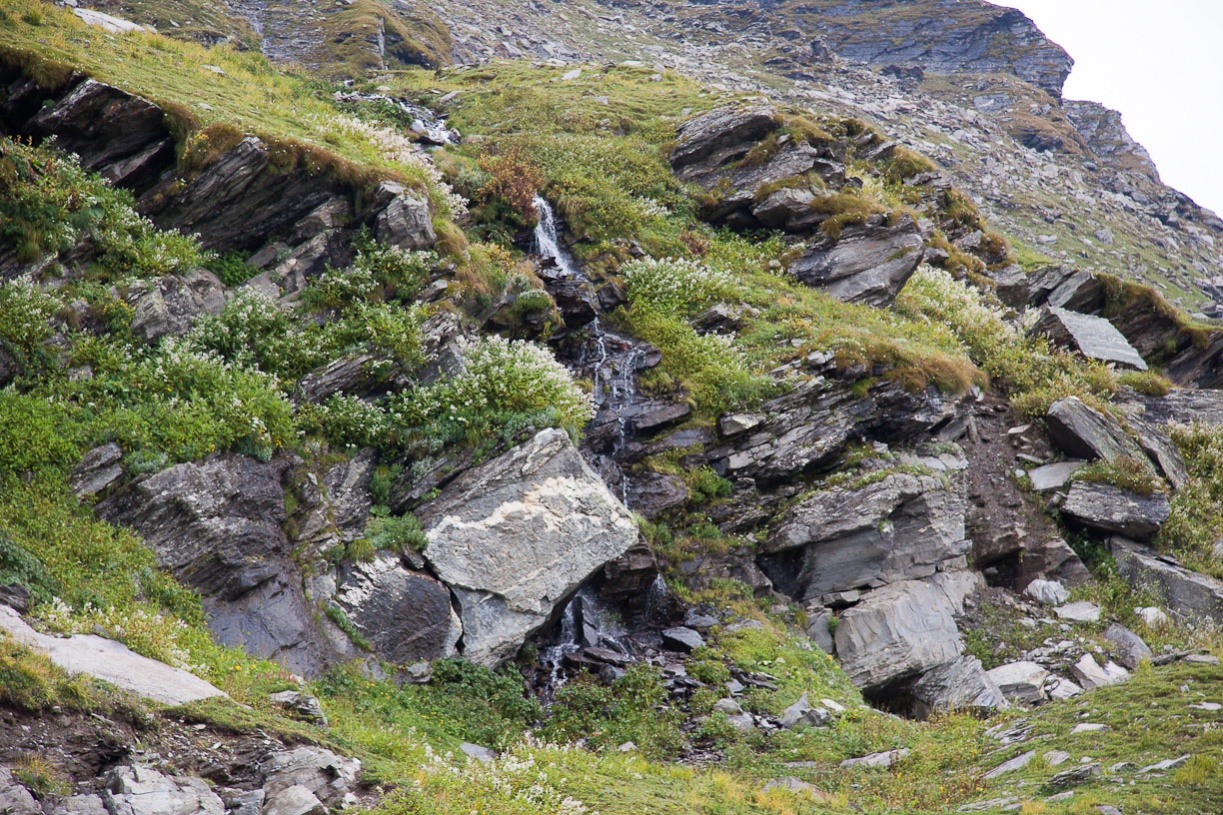 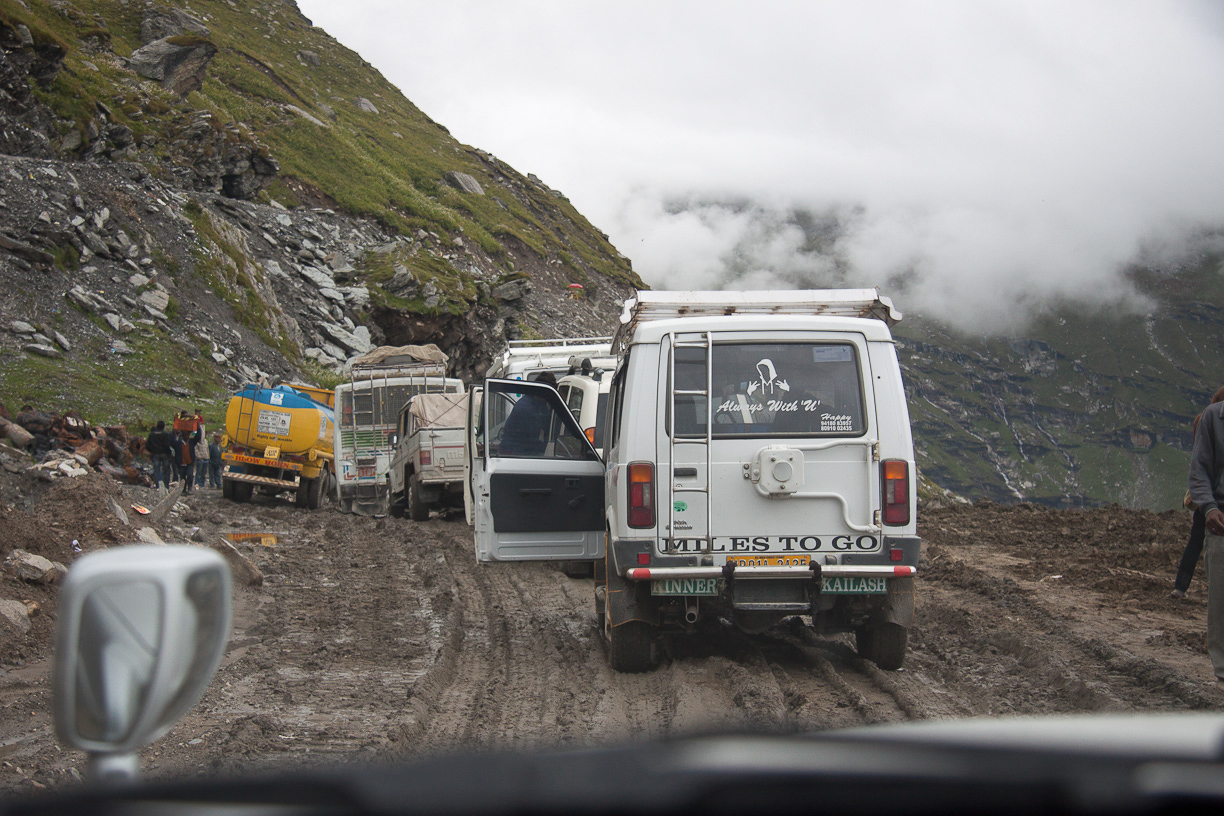 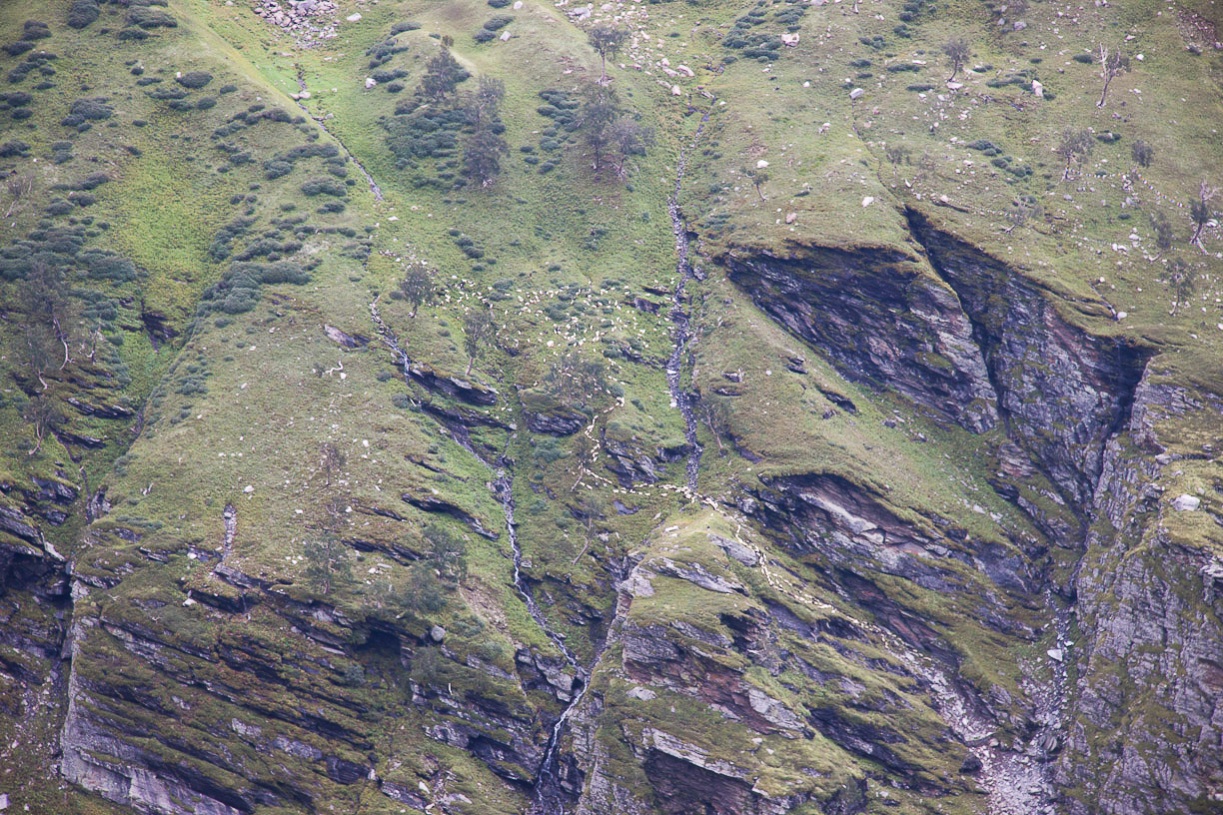 This area has some of the most beautiful water falls. This one was unbelievably long. 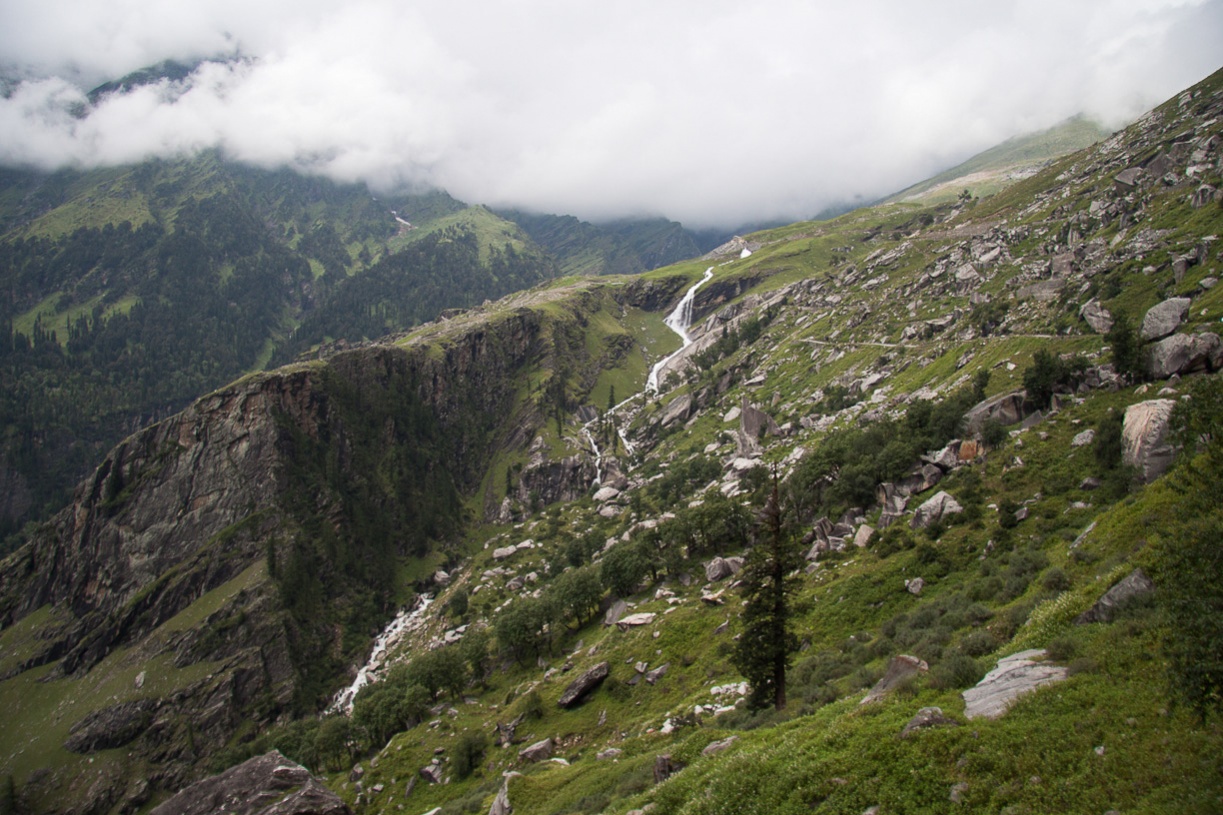 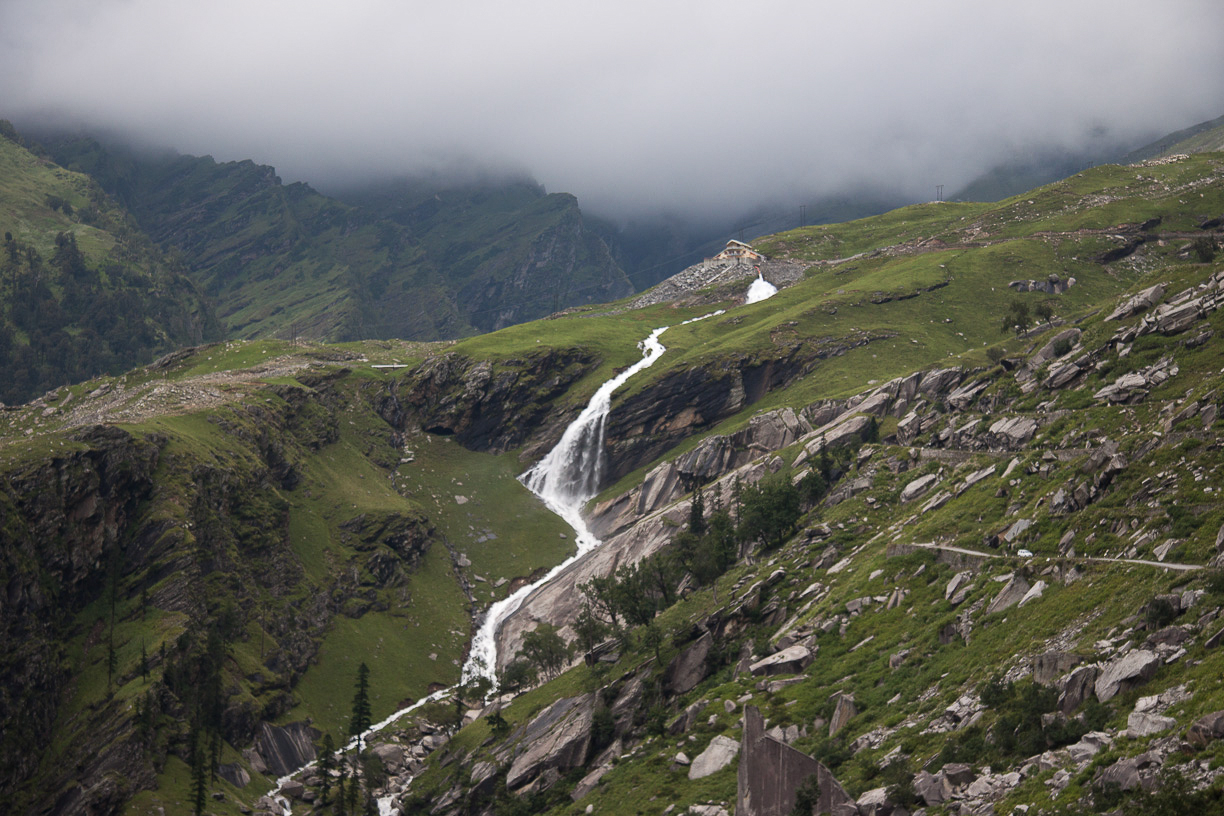 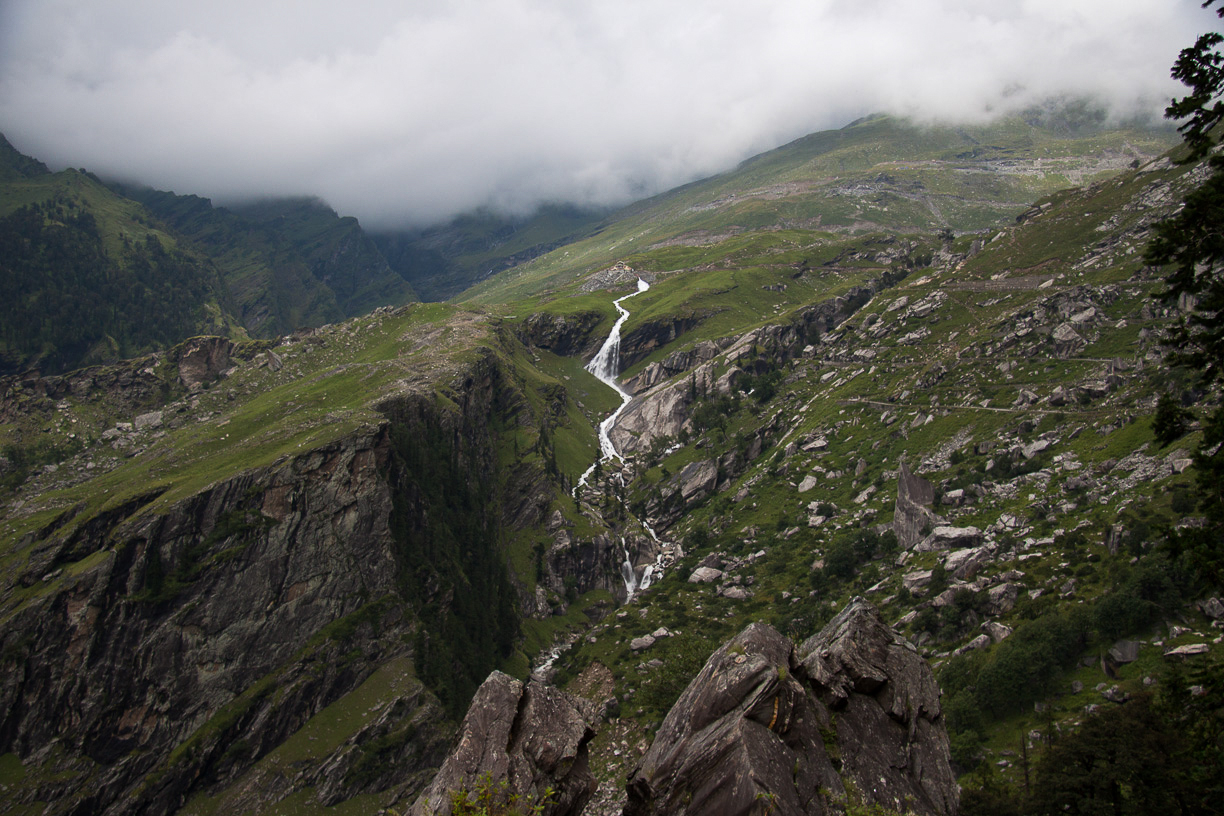 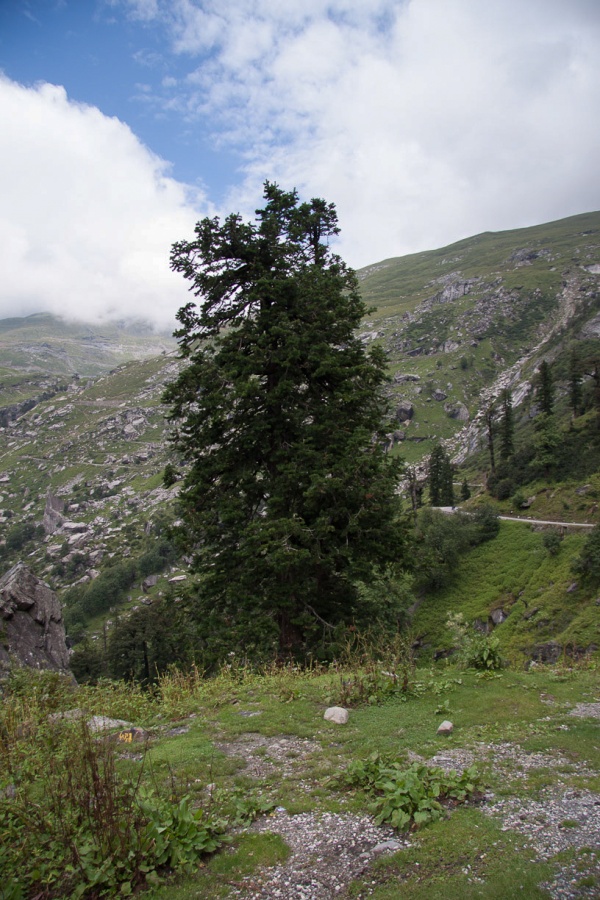 We crossed the hordes of Tourists and stopped after a long time to get out of the vehicle and admire the surroundings. 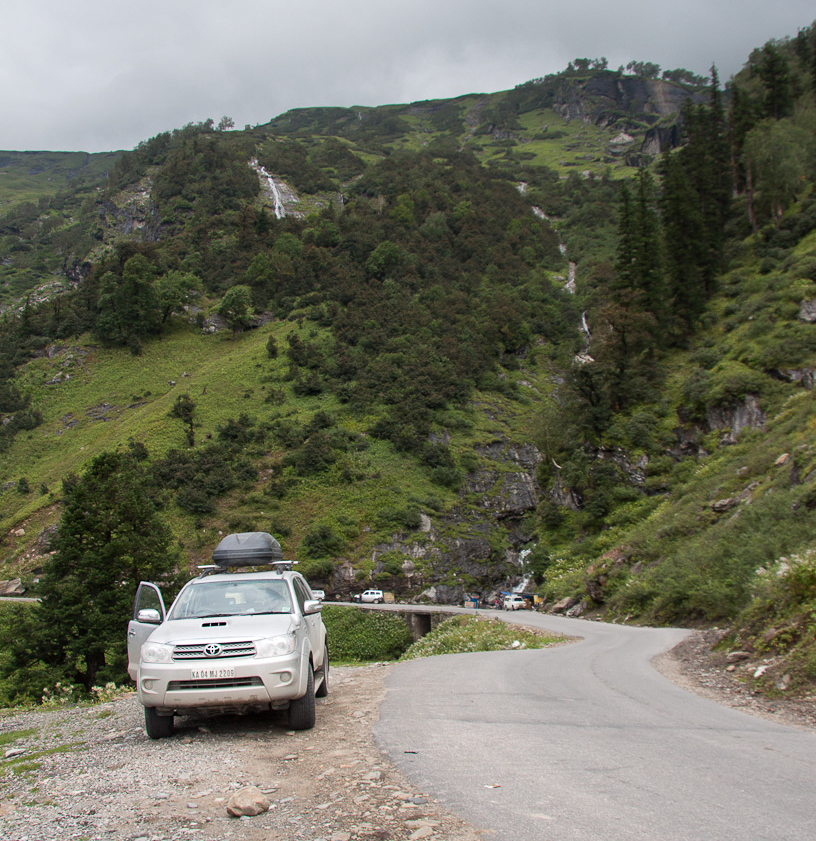 Manali, view from our Hotel Balcony. 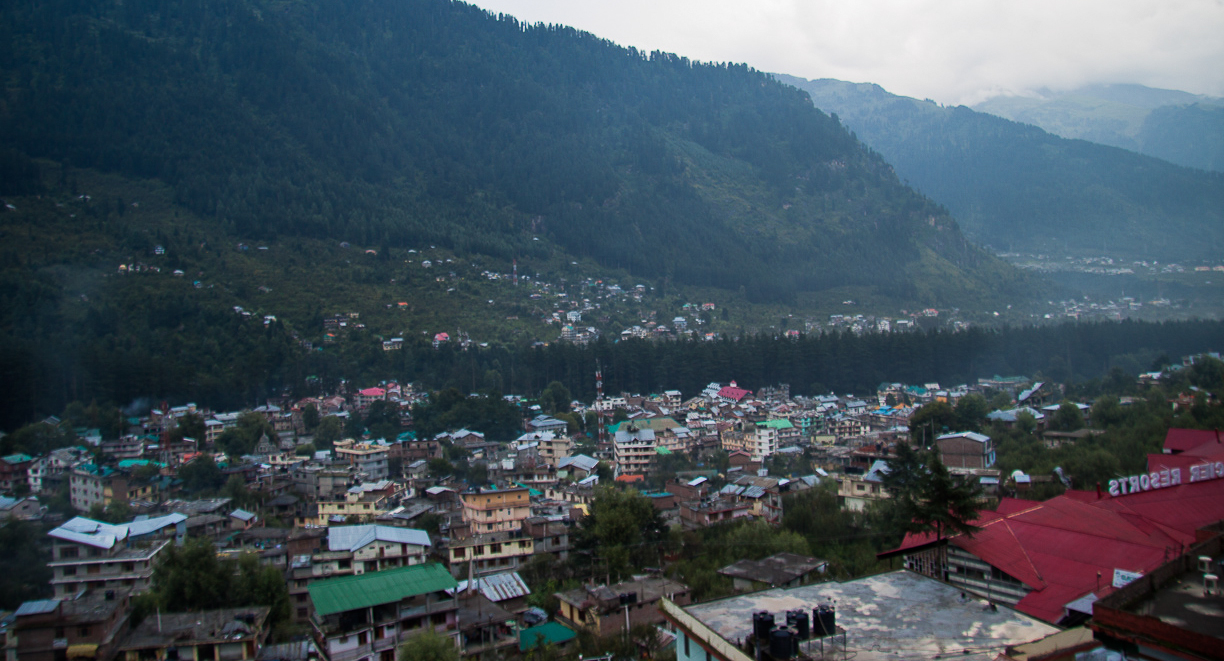 The day comes to an end

It was a chill evening and almost the end of our mountain ride. 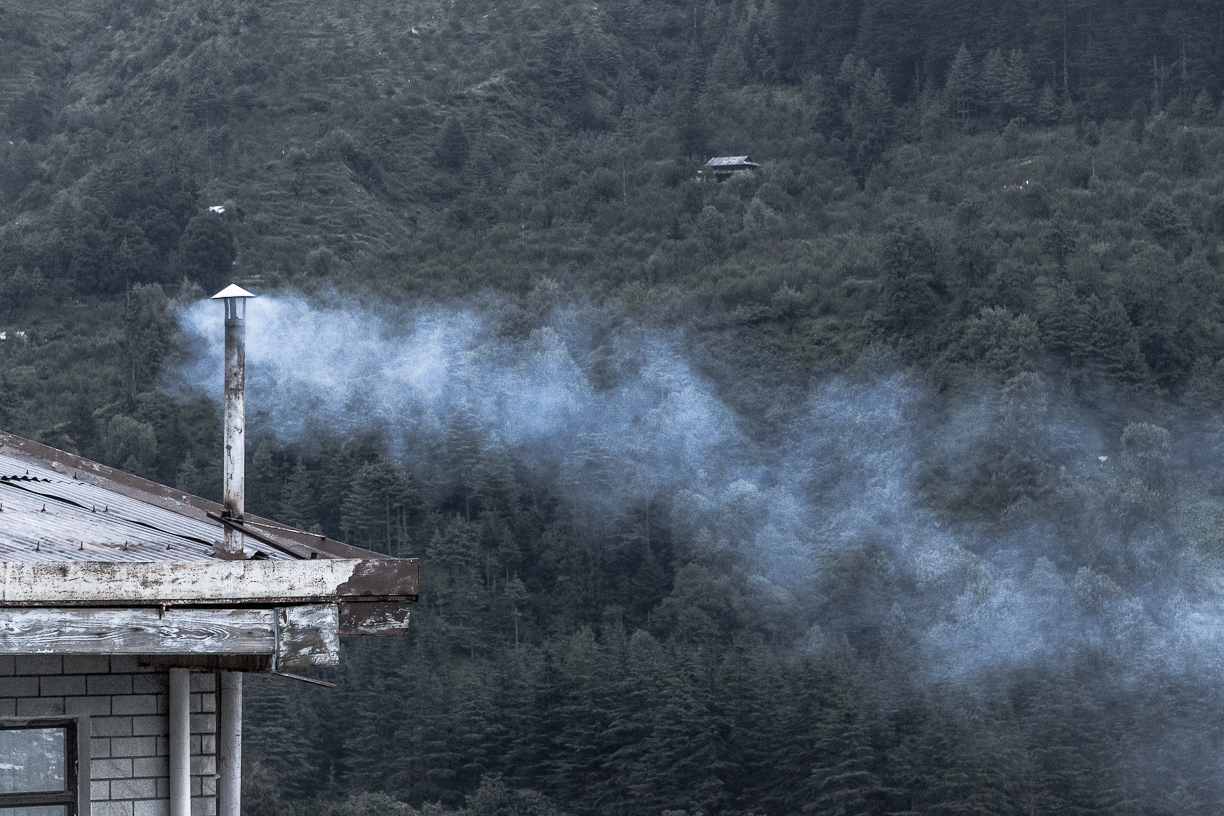 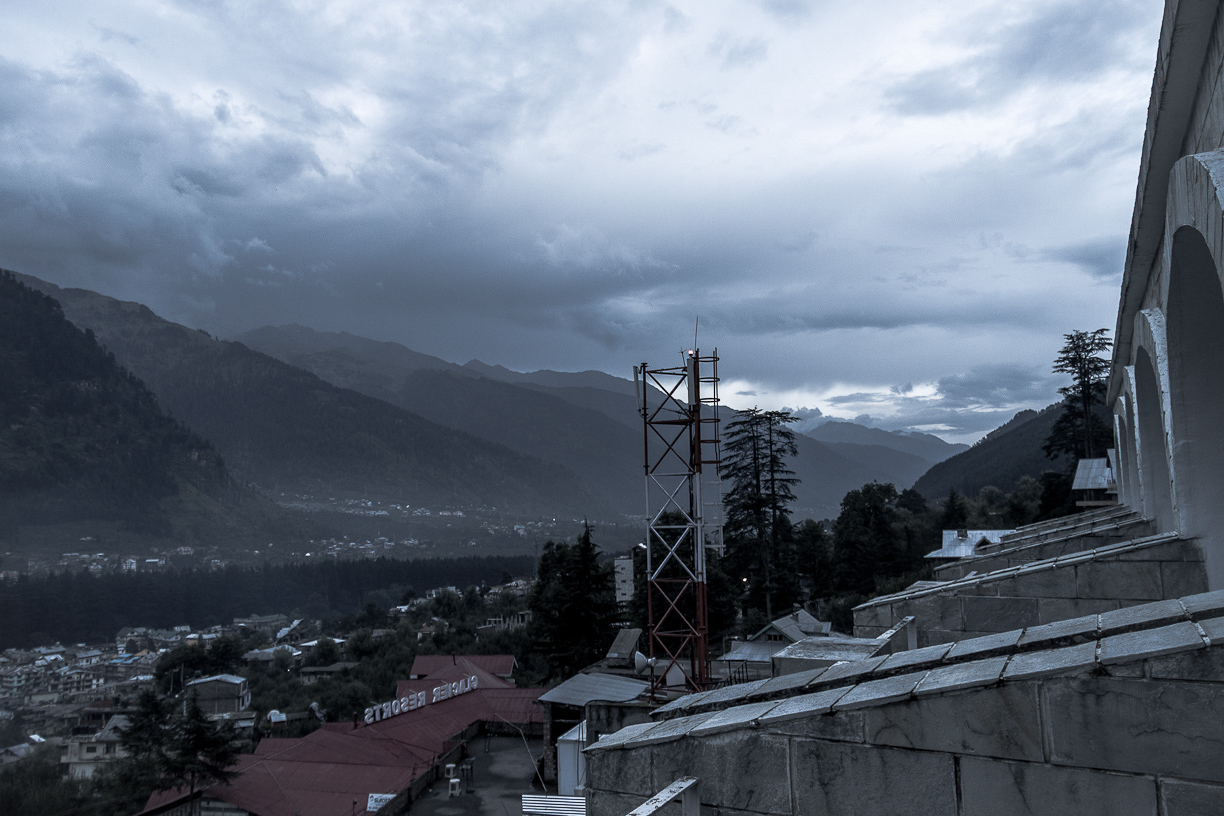 After a really long and luxurious sleep we left Manali the next day to run the gauntlet of the traffic from the plains. I personally like Manali better than Simla. Its bigger and more spread out, the roads are comparatively less crowded once you leave the Bus Stand Area, there is more to explore and the area is greener. The drive down to Chandigarh was smooth but tiring due to heavy truck traffic.
This was the 4th of September. We checked into the same Hotel we had stayed in on our way up at Zirakpur just outside Chandigarh on NH 22. We liked this hotel it was clean, served good food and most importantly was on the Highway.
Despite our commitment to get up late and leave leisurely to Delhi, we were up at the crack of dawn and cleared the Hotel before 8am reaching Delhi by afternoon. Cutting across the mess of City roads we checked into another Hotel on MG Road as it was close to the Airport and NH 8 that my brother would be taking on his drive back home.
The next day we hired a Taxi and met up with my brother's friend in the City and after exchanging stories wound up on Grudwara Road and Roshan Di Kulfi for lunch. Though the plan was to visit Delhi Haat we ditched the same and came back to the Hotel to laze around and separate our lugguage. I would be flying out of Delhi with my son and my brother and his friend would drive back to the Bungled-ooru.
I flew out of Delhi on the 5th of September. My Brother left on the 6th morning and reached home on the evening of the 9th after halting for the nights at Chittorgarh, Vapi and Kolhapur.
We had completed this marathon drive safely and reached home.
This also brings this t-log to its finish.
My message to all you folks out there is that if you are planning on a similar journey, as we did for years before actually setting off, get out from front of your computers now and ride the monsoons to which ever dream destination you have on your mind. Its wonderful out there and dreams do come true!!

Thank you so much for your constant appreciation and following the log, hope to do this trip yet another time someday....


JOHN MATHAI said:
I'm happy and sad at the same time
Happy because I could visit the whole of Ladakh without spending a paise
And sad because this beautiful log finally ended
Thank you for bringing us this wonderful feast
Click to expand...

Thank you again!!! True this log comes to an end with a hope and plan for another trip back to these beautiful places.
But then in the meantime i am sharing another travel story to Valparai in southern India, hope you enjoy visiting this place again through my travelogue.
http://www.bcmtouring.com/forum/travelogues-south-india-f63/reflections-driving-addictions-valparai-t47106/

So this marks start of plans for the next epic. Hope I could guess your next dream journey. I will keep my fingers crossed and wait for the next journey with tourist on the forum.

I went back to revisit few earlier posts, “birds on road”, during Changlang la climb. I had similar experience. They keep on sprinting, if you have capture them on lens successfully, do the same
The best captured pics of Changlang la “Z” showcasing the incline.
Pic with comment “A strange amalgamation of white and chocolate coloured rock” Did you notice same type of rocky mountain while going to Changthang from Upshi, I think this is back side of those type of rocks.
Loved the diamond ripple effect of Pangong Lake, looked magical!
Out of words on the pristine beauty, clear pics of Pangong! I have found it is next to impossible to showcase beauty of Pangong in single frame!
My take on black magic thing of bones, that locals have put remains of there beloved livehood who have severed them with wool, milk, flesh & more. Then as a token of humble respect they have decorated it with white cloth which they usually do in monasteries as expression of thanks, prayer and devotion.
Just amazed at your captures of Tso-Moriri, my hard luck – first that camera was faulty, second - during evening I was at opposite side of lake and when I reached Karzok, sun had set! Now I know what I missed. Of several pics I have taken from your log Pics 191, 195 of tso-moriri are my favourite, that rare thunderstorm and sunset was delivering magic (Pic of Nako village is my office desktop wallpaper) Agree with Amit sir, the best pics of Tso-Moriri, period!
In abundance of pics some are very well captured.
Specially one in which you have played very well with the light!
The stunning effect in your pics comes from that!
If you found above lines confusing, don’t mind, these are my amateur thoughts formulating.
Yet having seen these places in front, I still have my heart rate increased with excitement to see them on screen
Not yet completed with the log!

Now I realized that, its over. seems like an end of a interesting movie. Will wait for new release.

Fantastic start............. breathtaking pictures you sure have my juices flowing. What a range of colors for an intro.... Mesmerising. Will be glued to this travelogue taking this journey thru your eyes

Thoroughly enjoyed the pics and the narrative