Finally did Munsiyari, a long pending trip, in my bucket list on my RE TB 350. I was accompanied by my colleague Harsh, on a Avenger Street 220.

We hoped to stick to the iternary but not stretch ourselves too much as it was Harsh' s first mountain ride and that too Munsiyari !!!

I woke up at 3 am and got ready by 4. Then went down to my bike and loaded my luggage on to the LC on my Thunderbird. Around 4:15 am i left East of Kailash, a locality in South Delhi to meet Harsh who waited for me at the Radisson Blu signal at Ghaziabad. So we left around 4:45 am from the meeting point and rode on NH 24 till Gajraula which was our first pit stop.
Though it wasn't cold till Gzb, it became very chilly as we crossed Pilkua. We rode till Gajraula & reached there around 6 45. We has omlette & paratha along with tea and started again after relieving ourselves.

We rode till the Moradabad turn and rode towards Jim Corbett National Park situated at Ramnagar (Uttarakhand). We crossed bad stretches for about 8 kms and then the road evened out. Harsh had a minor fall which shook him up a but thereby slowing down our pace.

Finally we reached Ramnagar via Kashipur (filled up fuel here) and proceeded towards Dhangarhi Gate of Jim Corbett. We stopped at Dhangarhi Gate for some selfies and moved ahead. This point onwards one get6s the real feel of Uttarakhand.

After crossing Mohaan, we started the climb towards Ranikhet, a popular hill station which was our planned pit stop for some food. It took about 3.5 hours to reach Ranikhet where we had Maggi & Tea.

We proceeded towards Kausani but went on wrong direction thanks to some wrong directions given by some local. We were stopped by cops who were inspecting vehicles along with Election Commission as elections were due in UK. They asked us to go back & guided us the right path,.

We then followed the road signs which led us to a road via a thick jungle. There was hardly any road there nor any soul.... scary. Finally we hit the Almora-Kausani road which said Kausani was another 22 kms away.

After exchanging frustrating glances, we moved on and finally reached Kausani around 5 30 pm, before dusk. We checked into Hotel Sun & Snow which has a majestic view of the Panchachuli peaks and Nanda devi.

After buying some N Veg snacks outside (hotel was pure veg), we eagerly had some Rum which was our elixir of life for the trip and crashed by 10 pm 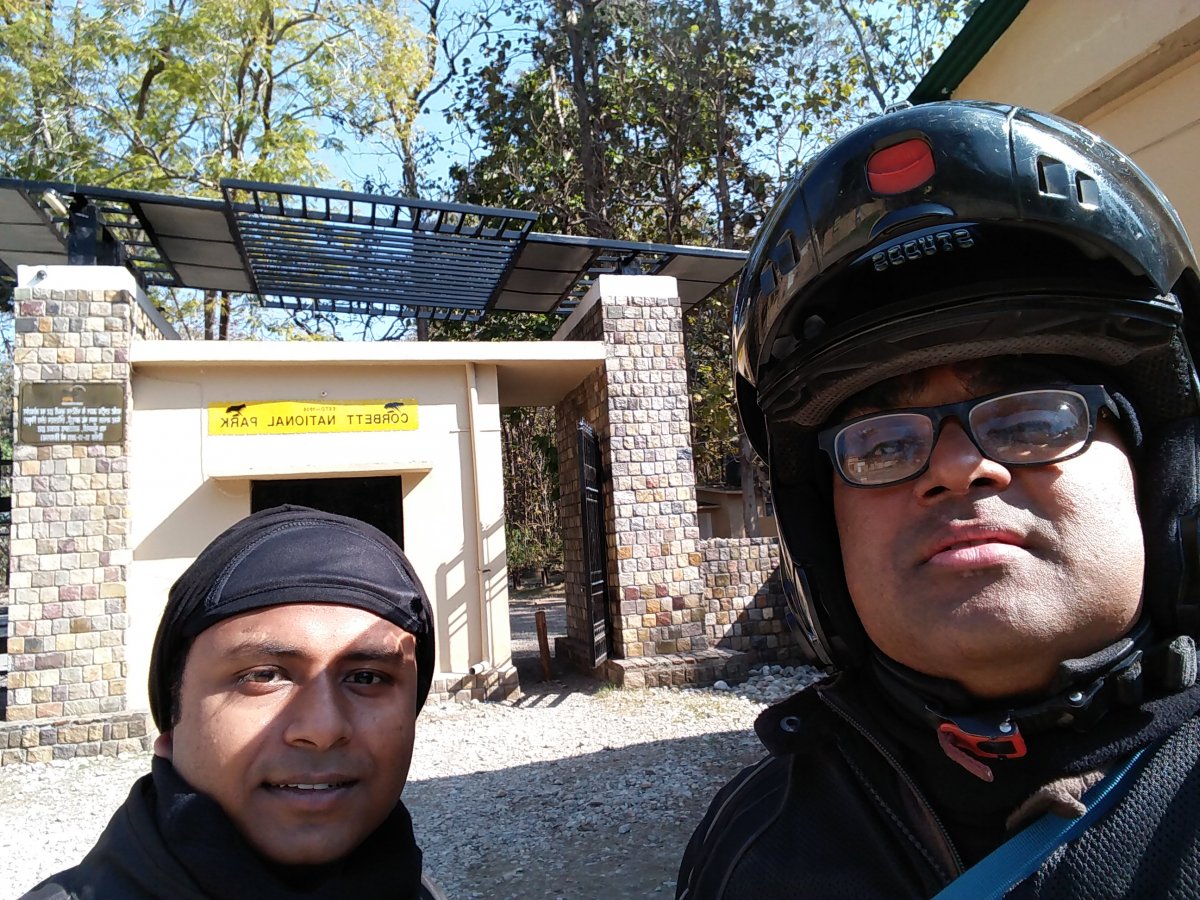 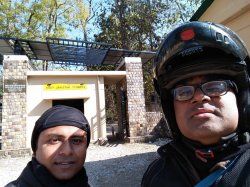 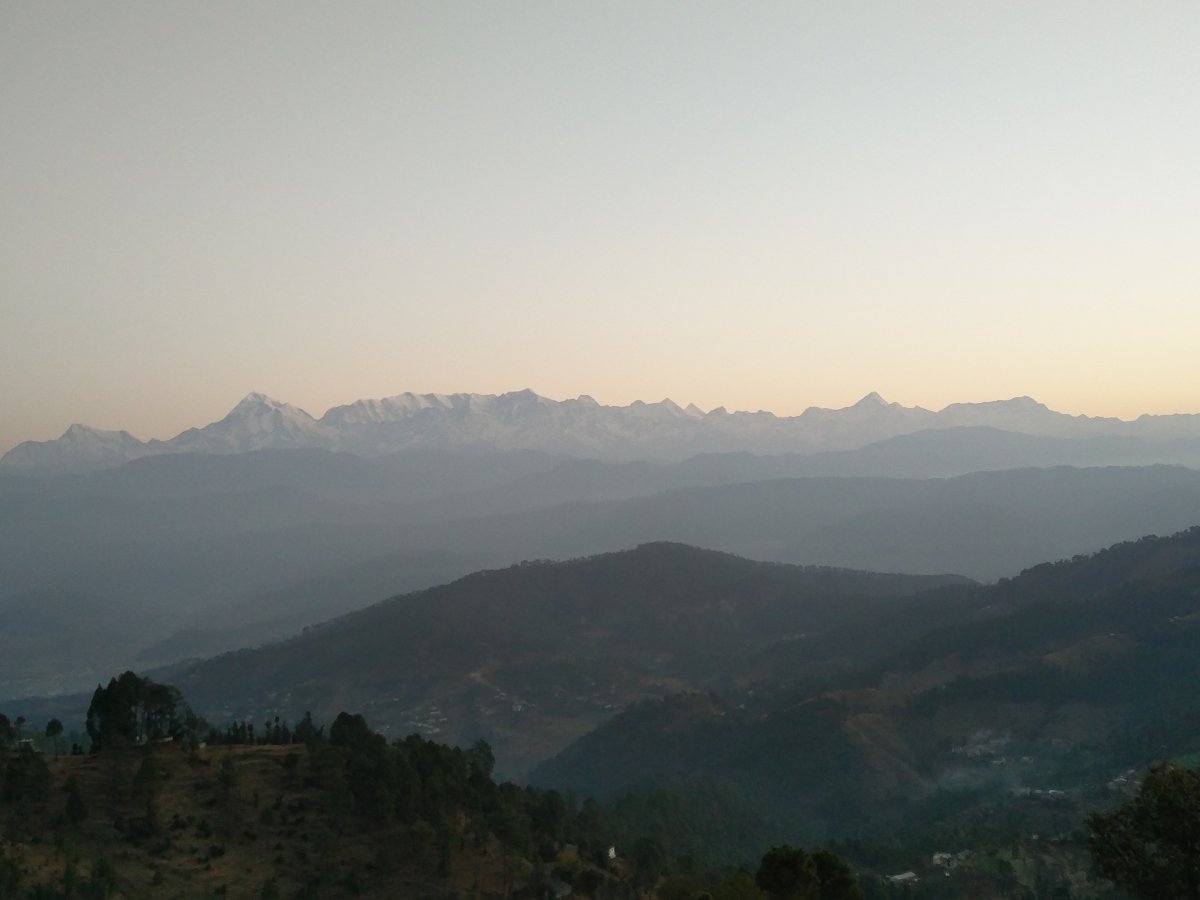 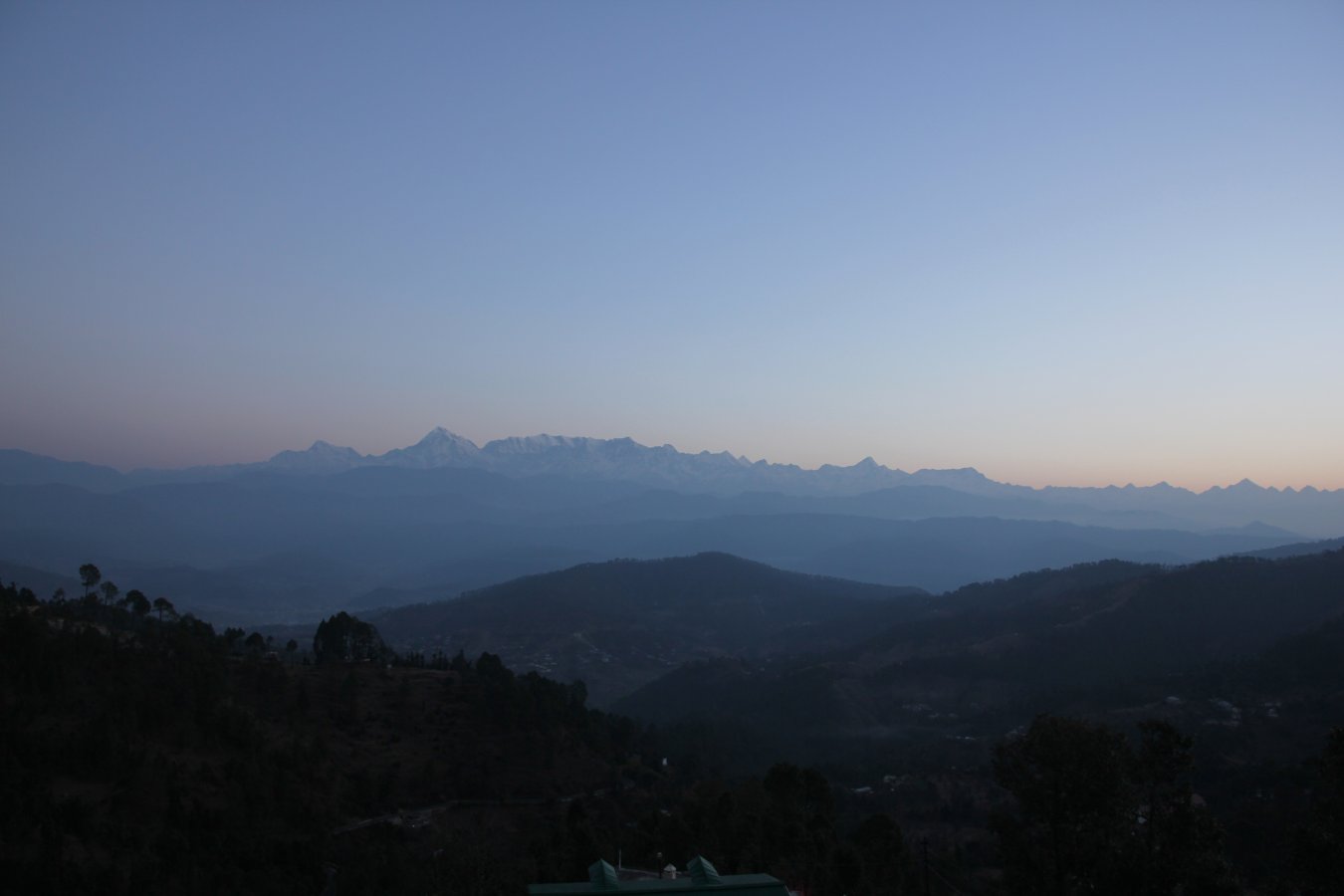 We woke up early to watch the sun rise across the Panchachuli peaks, as recommended by the Hotel guy. The sight was refreshing & motivating to have a closer look at the range from Munsiyari……….

After a few attempts to tie Harsh’s luggage, including a broken bungee, we moved on from Kausani towards Munsiyari. We proceeded towards Baijnath where we had our breakfast. I finally had to shift Harsh’s luggage onto my bike as the bag kept tilting towards one side. The Avenger didn’t have optimal bungee tying points and due to bends on mountain roads, the bag kept tilting and looked that it fall anytime.

We crossed Bageshwar, Chaukori and reached Thal where we tanked up. Incidentally this the last fuel pump. We moved towards Birthi and poor Harsh had a fall again while negotiating a water laden slant road. We then reached Birthi and walled up to the falls. The sign said 125 meters but the climb was steep and tall steps. After several gasps, reached a point where we decided we walked enough and we had a good sight of the falls. After a few clicks, moved back and started the arduous & treacherous journey to Munsiyari.

The climb challenges you with steep mud roads, hair pin bends, blind spots and a vertigo inducing view below !!!!. We tool about 2 hours to reach Kalamuni top. Once we saw the mountain range, our energies were recharged…

Began the decent to Munsiyari and stoppe4d to see snow on the side walls on the mountain. Objective of touching snow achieved. J

After a few anxious moments during decent and a few photo stops, we reached Munsiyari and checked into KMVN. Had to negotiate but the manager relented. We checked in and moved out to take photos at the 0 mile stone and show off to our friends ….

Clicked pics, got Harsh’s gear lever fixed which had become loose after the fall and picked up some “chakna” for the Rum session again. After refreshing, we sad down and celebrated our arrival at Munsiyari. KMVN makes the best chicken and I really hogged it. We finally crashed around 10 30. 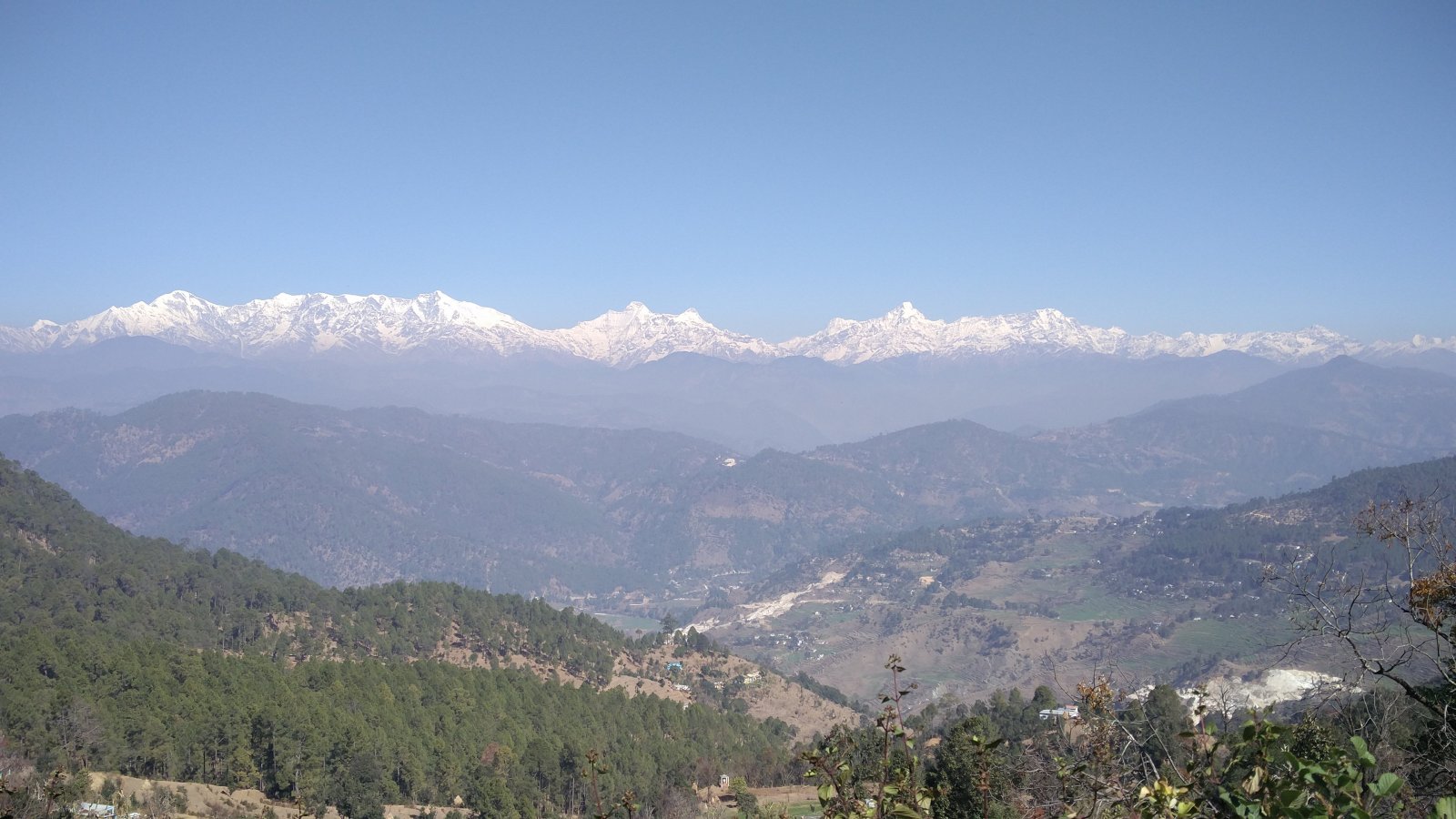 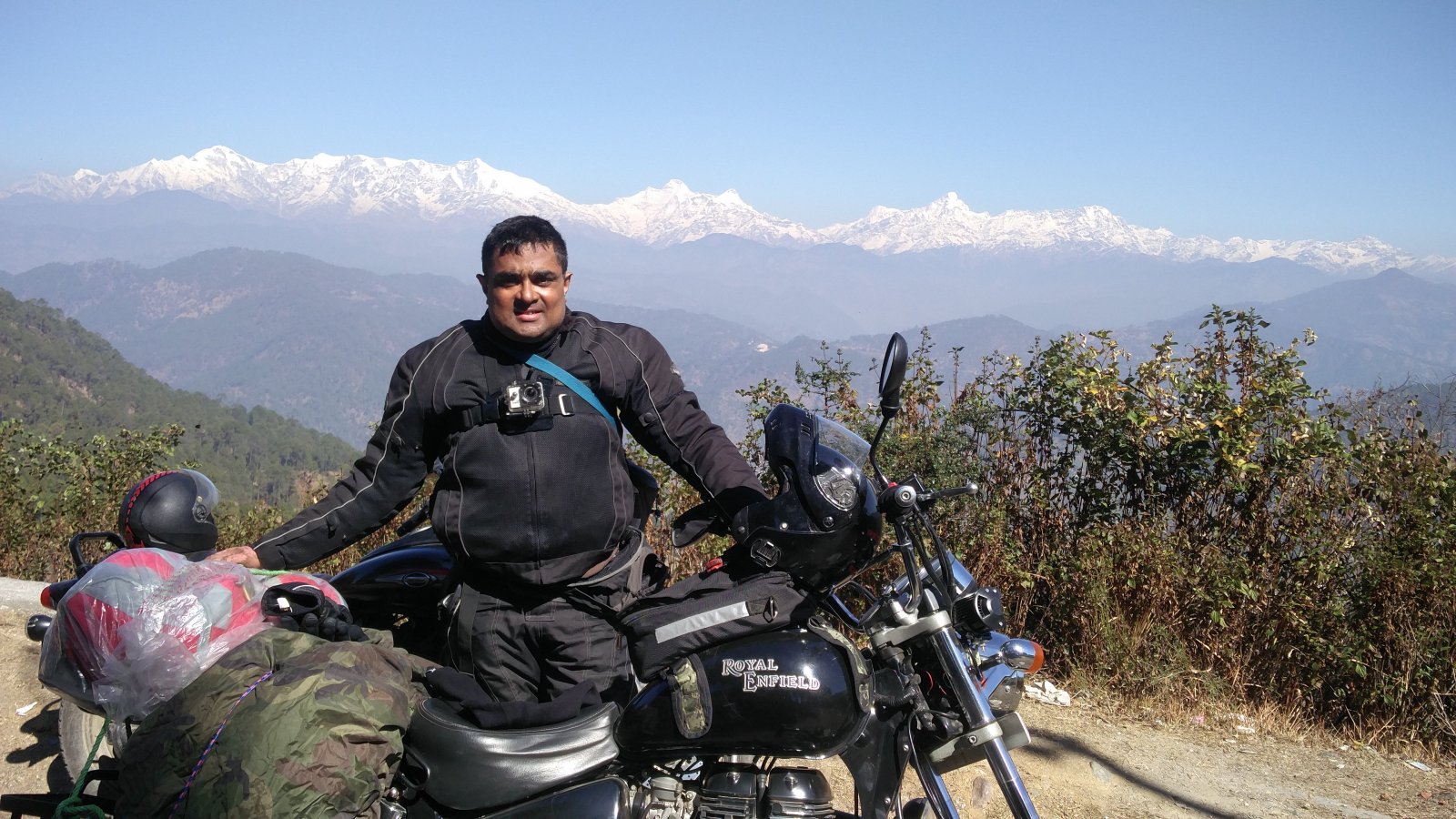 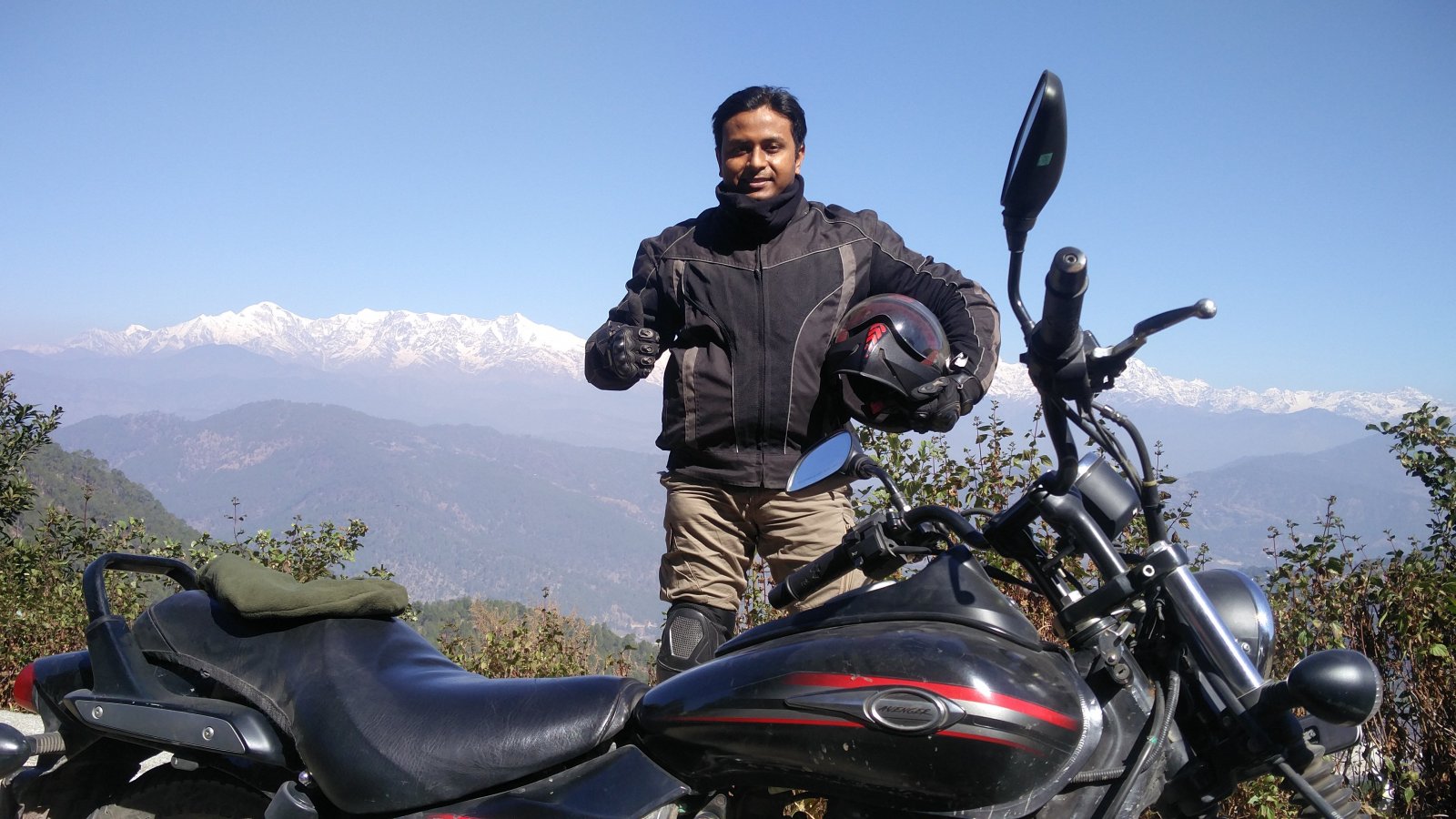 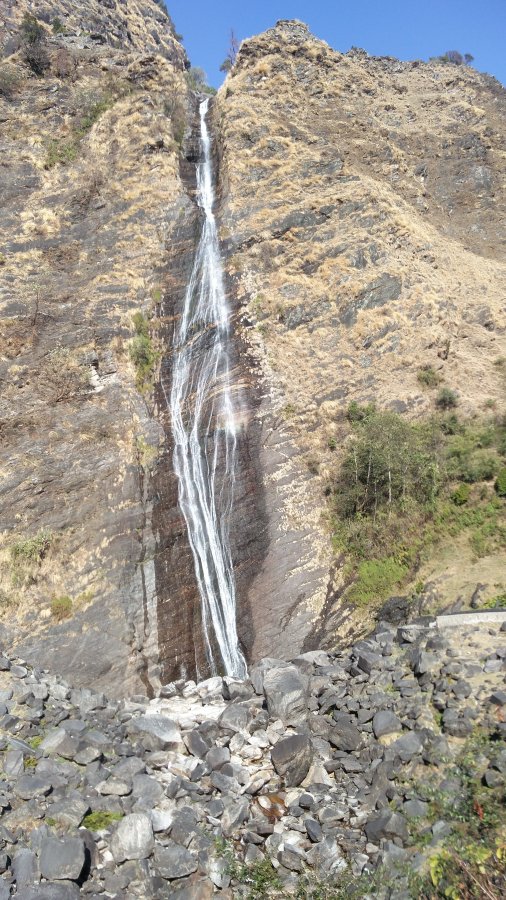 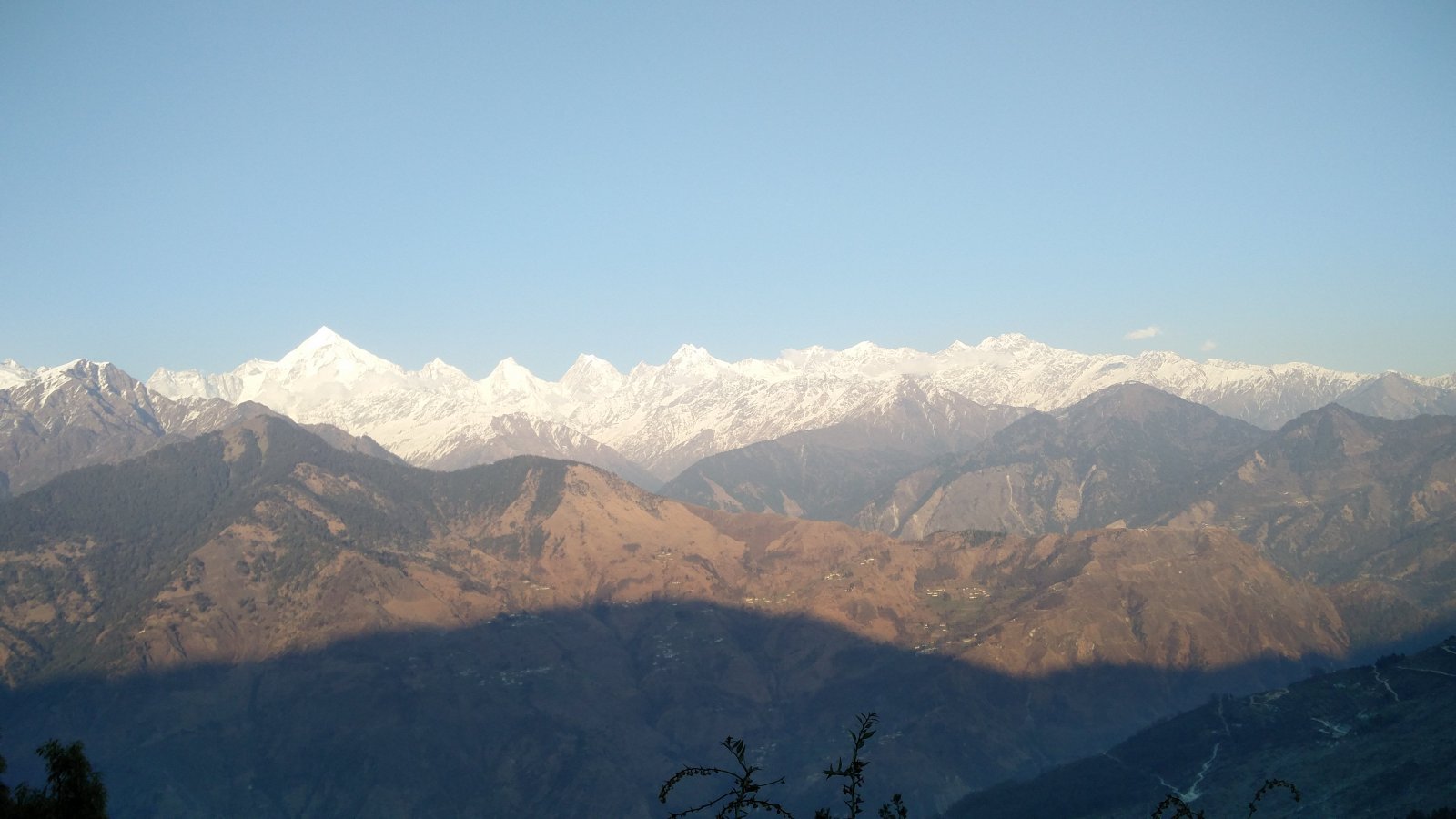 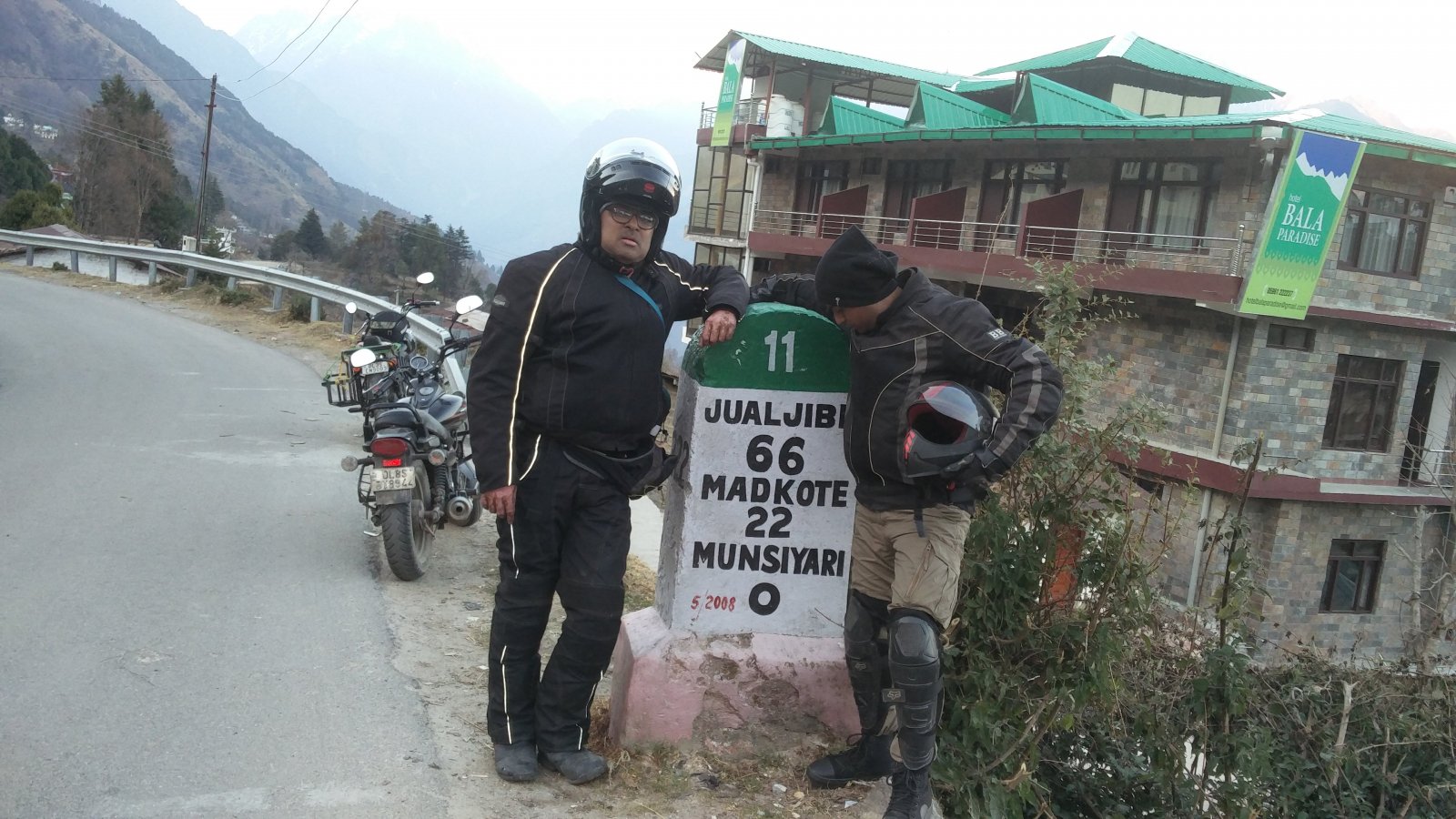 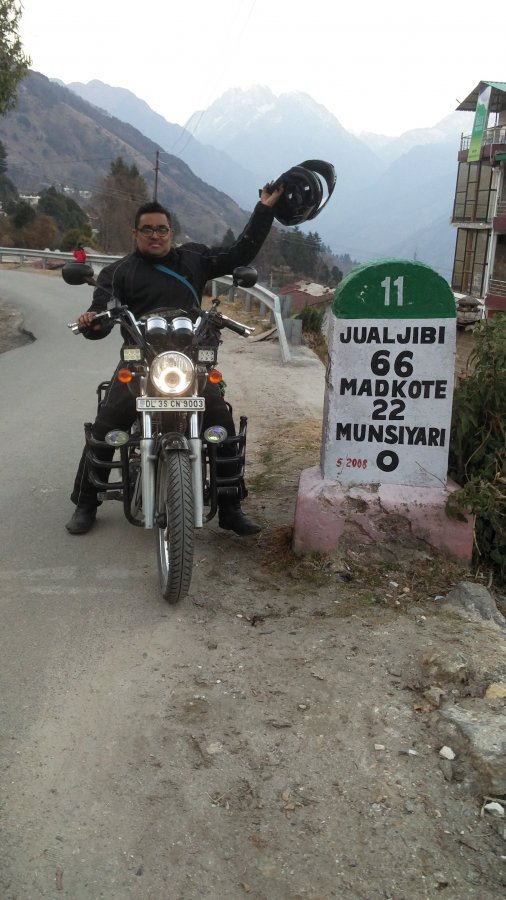 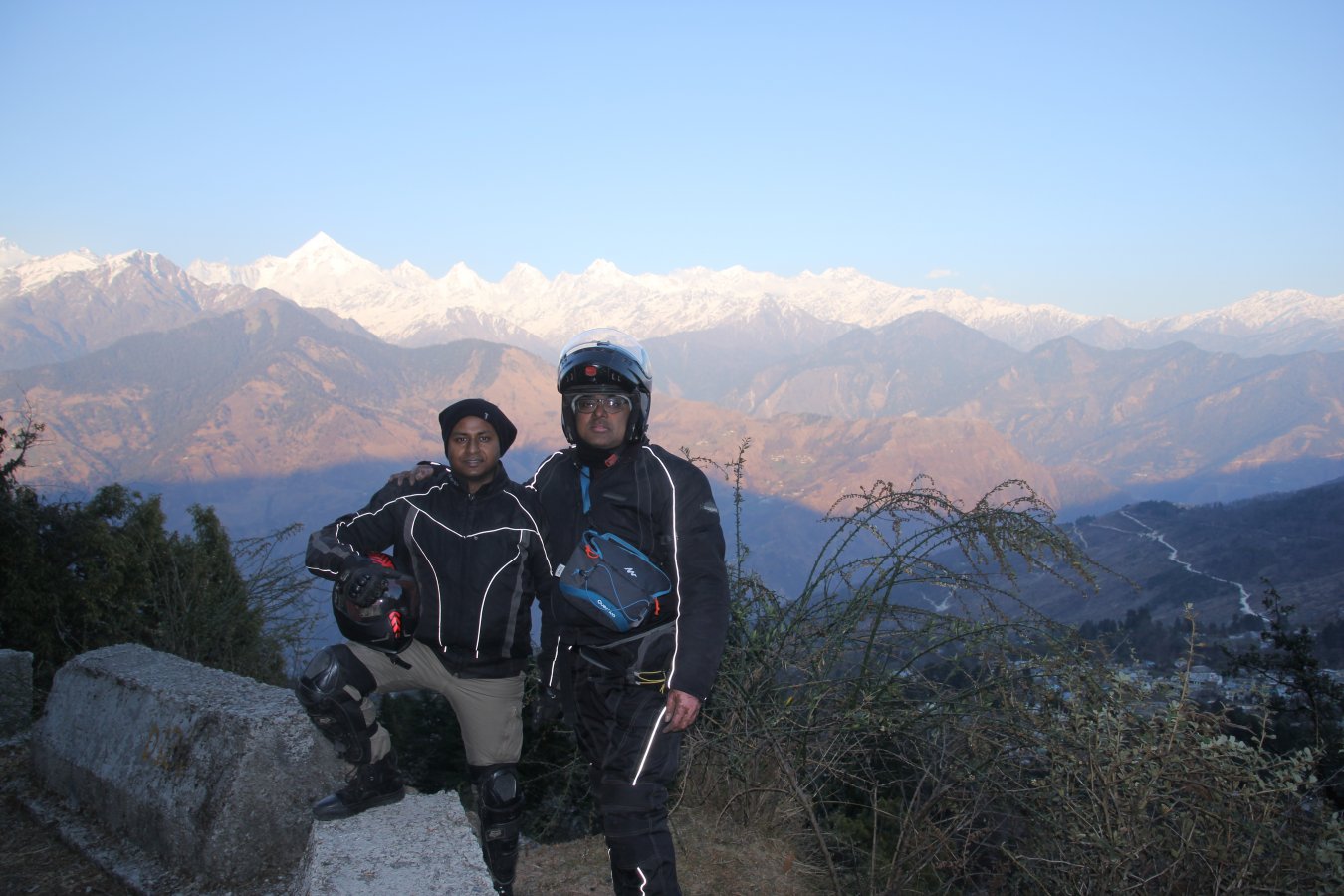 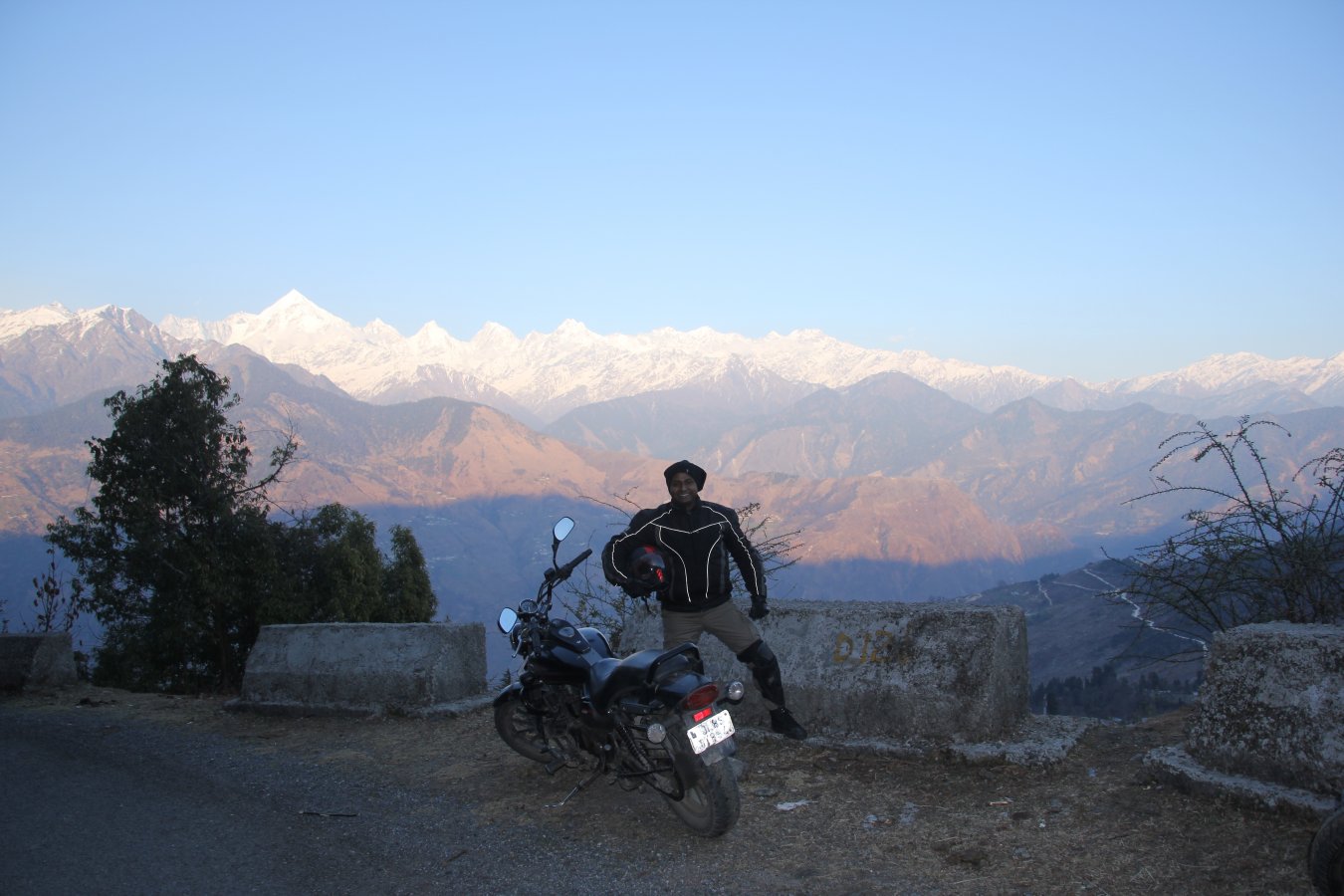 Lovely, waiting for the next part.