Sunset at the White Rann 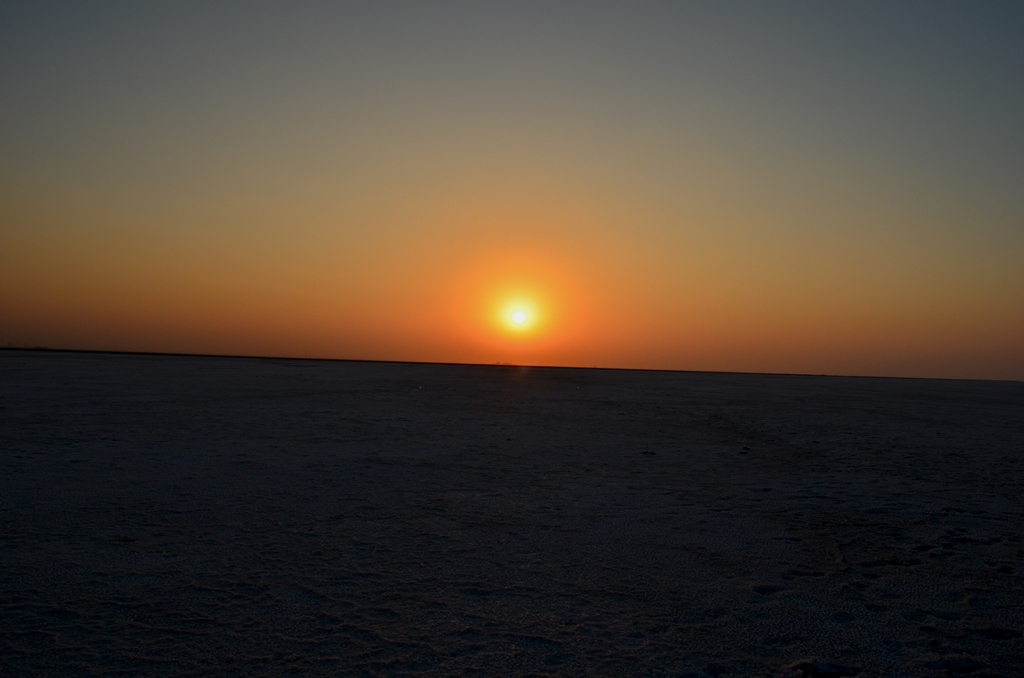 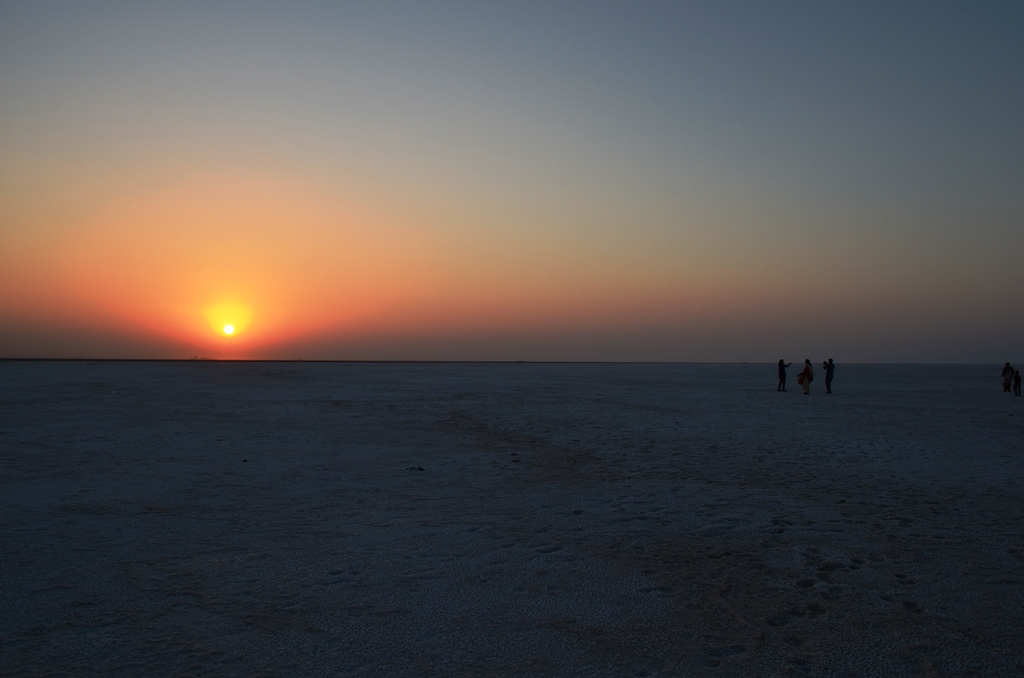 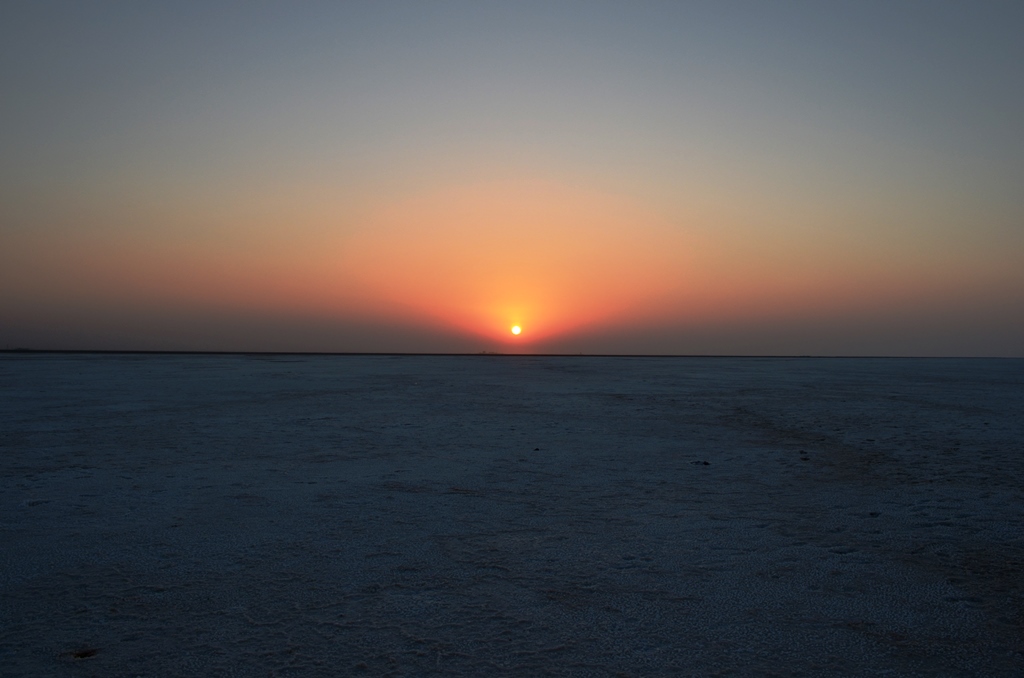 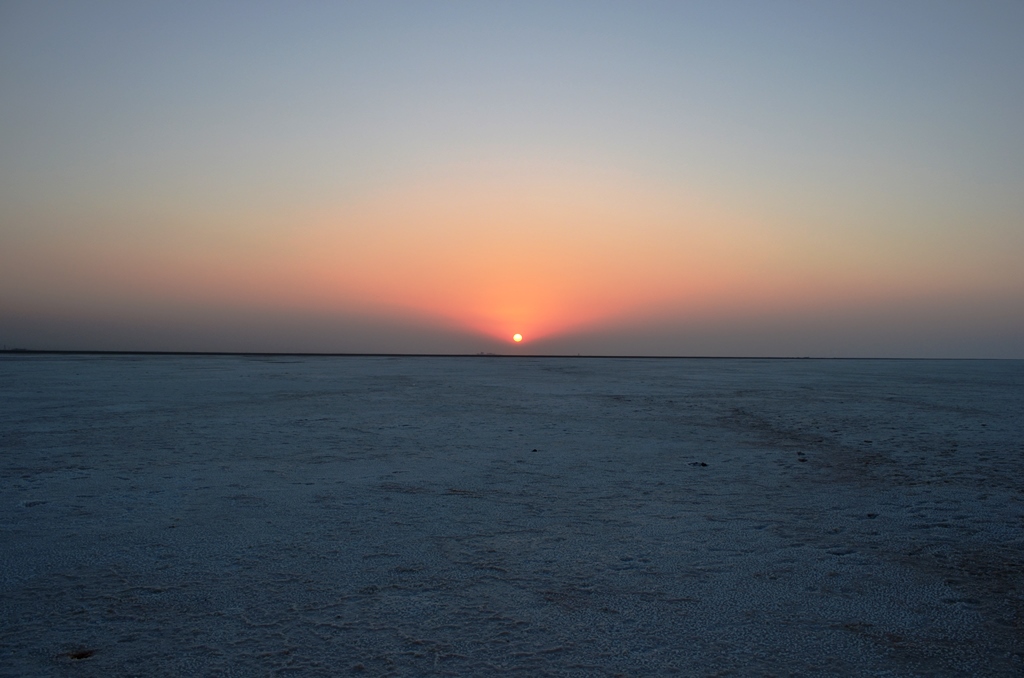 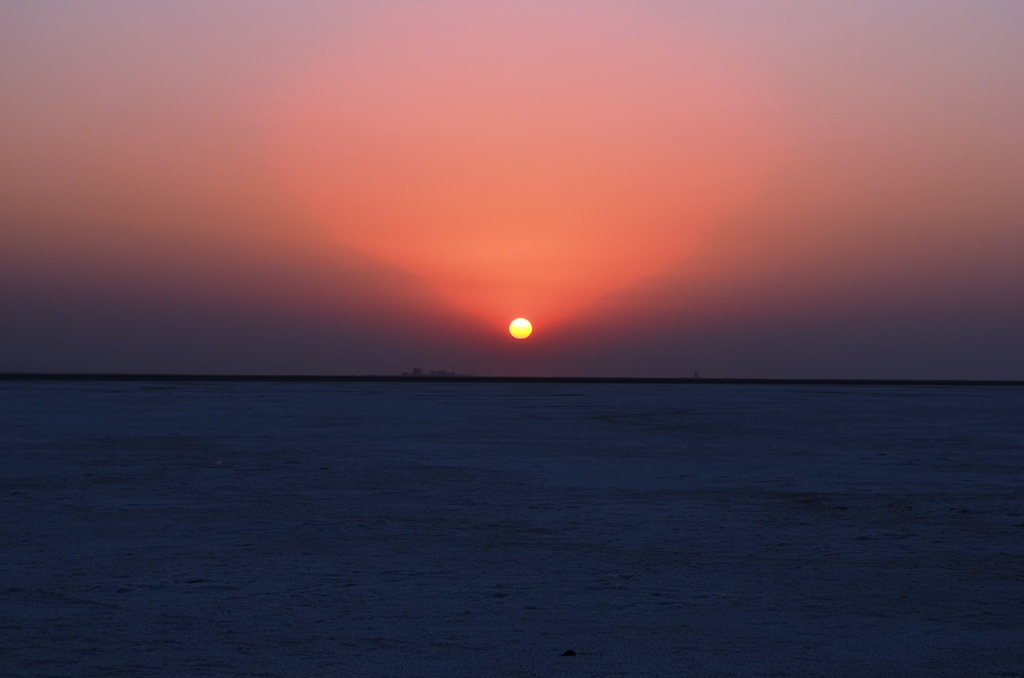 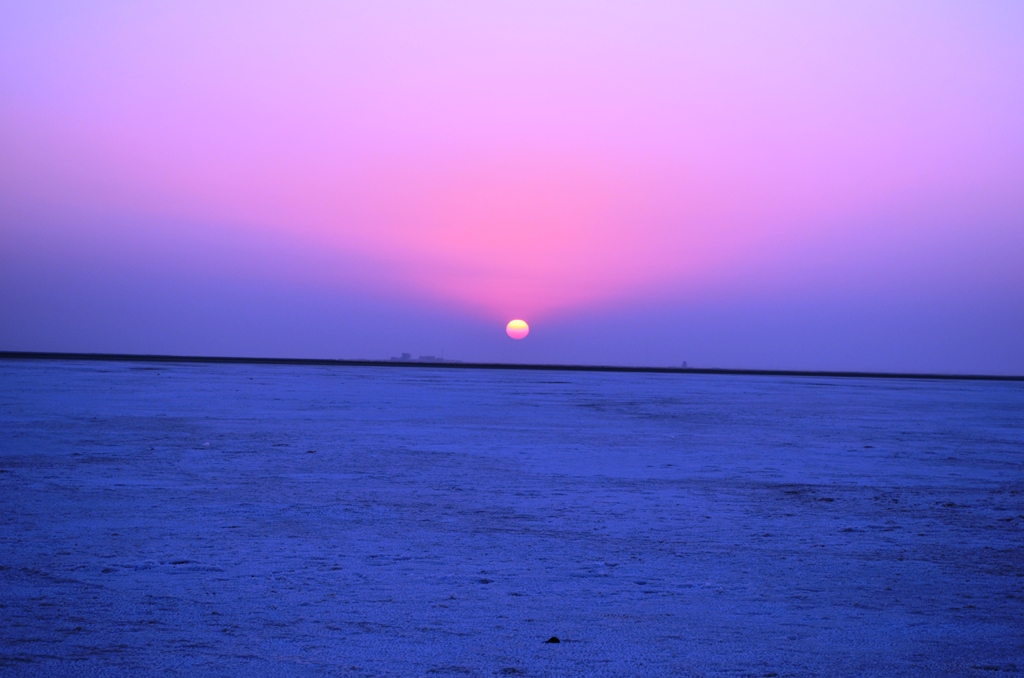 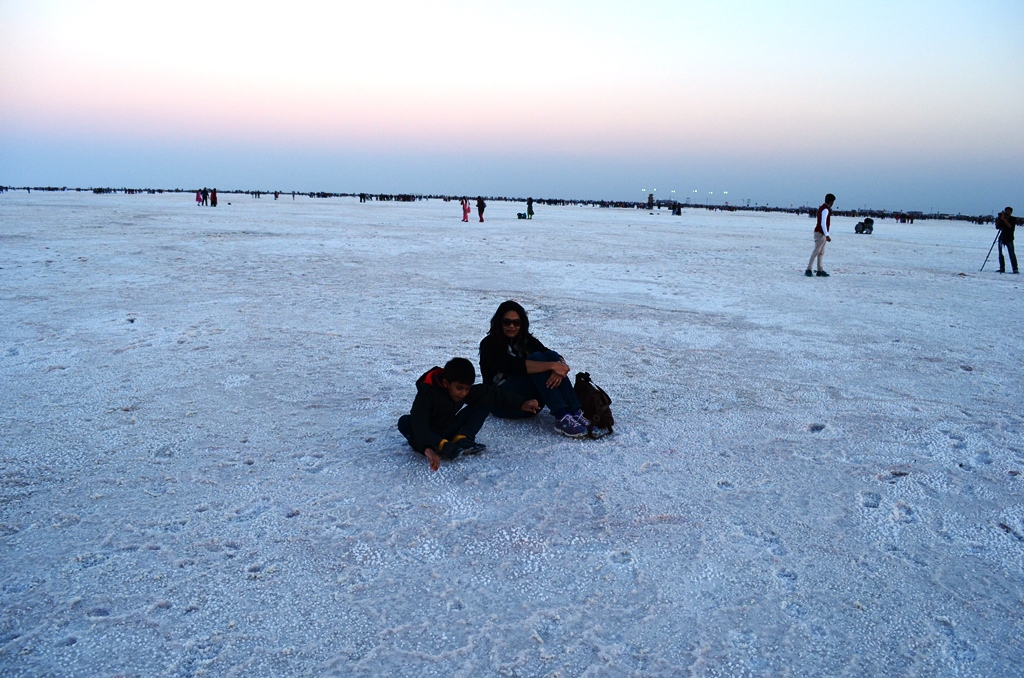 My son going for a long walk deep in to the White Rann. We had to turn back and say we are going back before he came running. 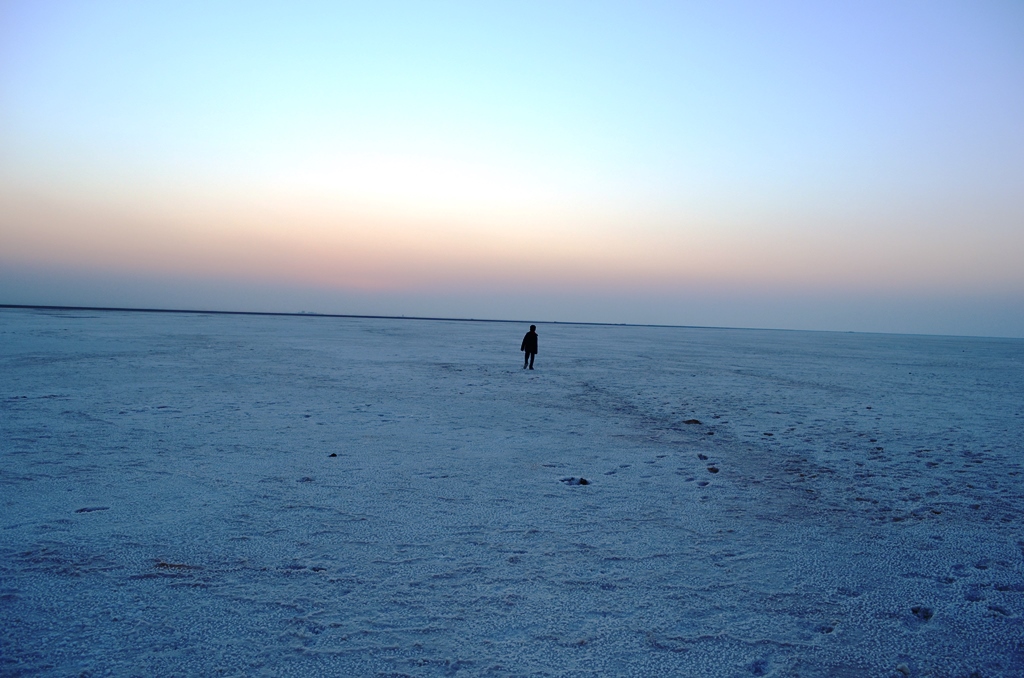 We left from the White Desert by 18:45 and were once again stuck in a minor traffic jam at the check post on the way back. Once again people did not want to follow lane discipline and caused the jam by blocking the traffic coming from opposite direction.

However, it was soon under control and we were clear of the Rann Utsav and on the way back to Shaam E Sarhad resort in Hodka. It was pitch dark, and the headlights were on. On the way, the headlights fell upon an animal crossing the road and we were certain that it was a Hyena by it's shape and the way it was walking. However, it could well have been a fox or jackal.

We were told that dinner is served 19:30 onwards. I spoke to Dhanji bhai, who is the manager at Shaam E Sarhad and asked him if I would get a vehicle and guide early next day to visit Chhari Dhand. He said that I would and will arrange the same. He suggested not to take a guide as the local driver knows the area, and also that the birds were less that year due to water being less that year.

In sometime, he confirmed that he had arranged for a jeep and it would come at 0515 early morning as it would take about an hour to drive to Chhari Dhand and I would need to be there before sunrise. The birds usually fly away after sunrise. It would cost me INR 1500 for hiring the jeep. I agreed.

We went back to our hut, and spent some time reading before coming our at 20:00 for dinner. It was quite cold. The resort also arranges for some artists who sing folk songs by a bonfire for guests. The program usually starts at 20:30 and goes on for an hour or more.

We had dinner and then I spent some time taking pictures. It was a lovely clear night and the sky was full of stars. Then we sat on a charpai around the bonfire along with other guests and spent some time enjoying the folk music. 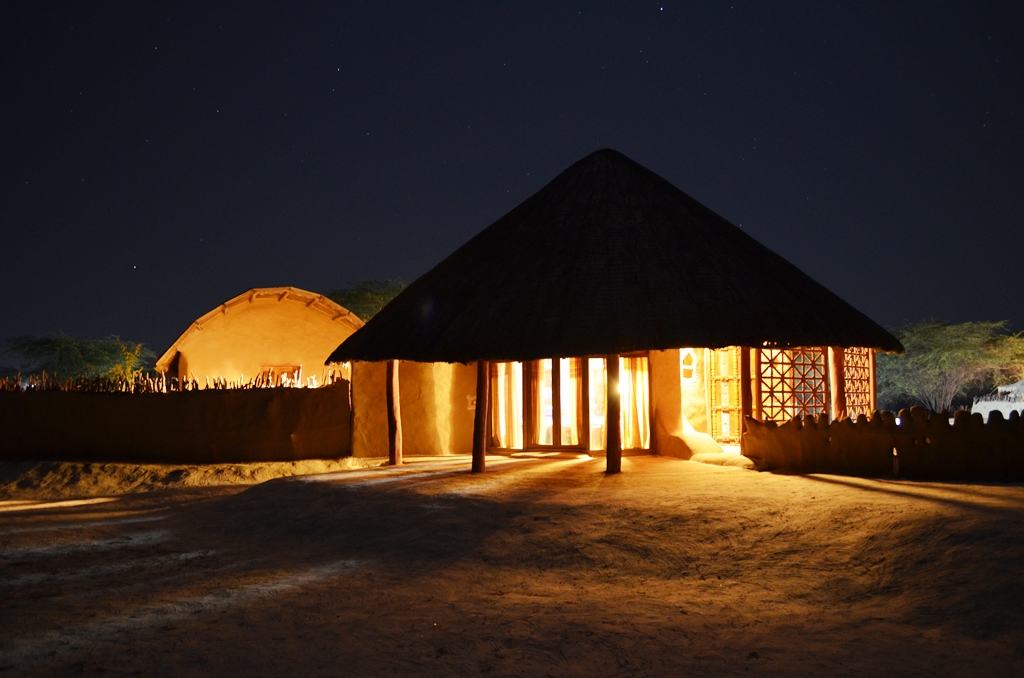 Taken from the front yard. You can see the stars in the sky. The adjoining structure is the attached bathroom. 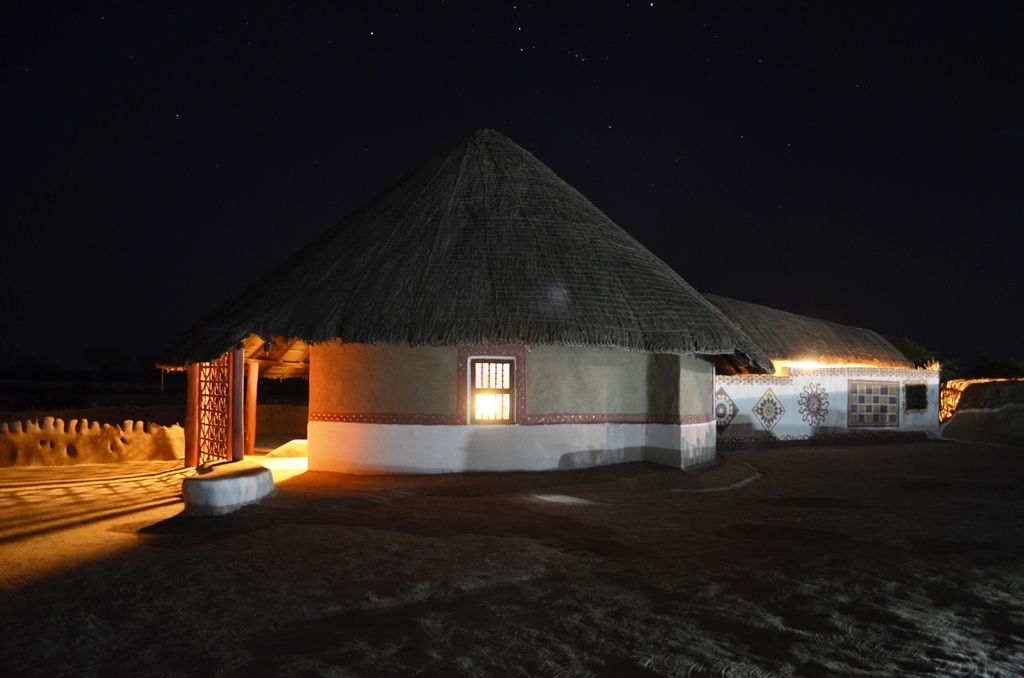 The entrance to the resort 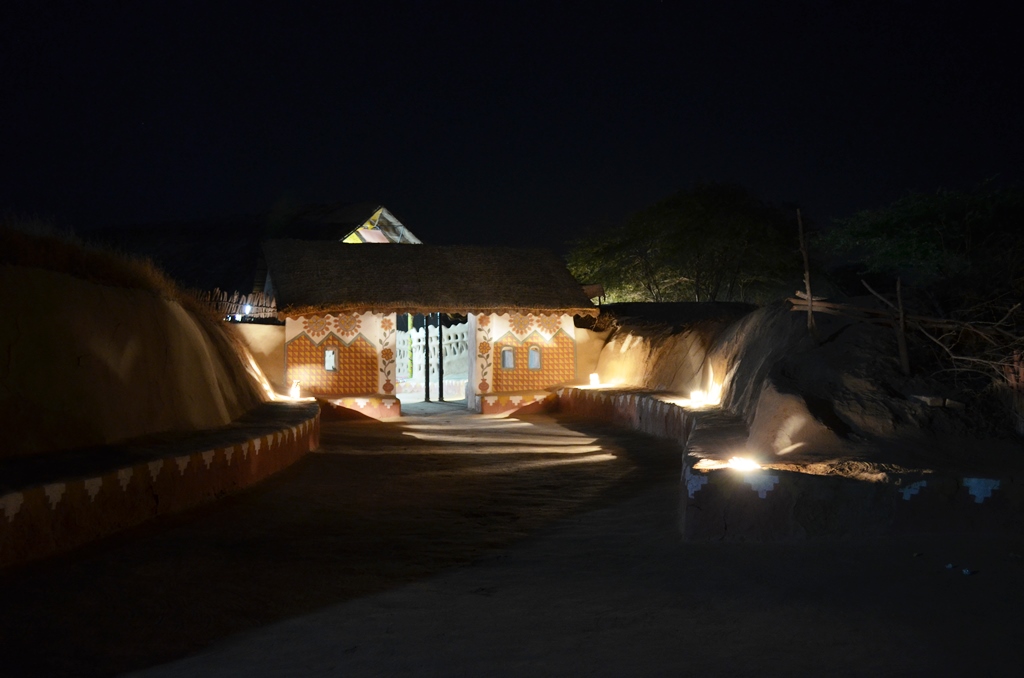 Local artists, entertaining the guests with folk songs and music. Very sweet voice they had and sitting on a charpai around the bonfire listening to the music was an enjoyable experience. 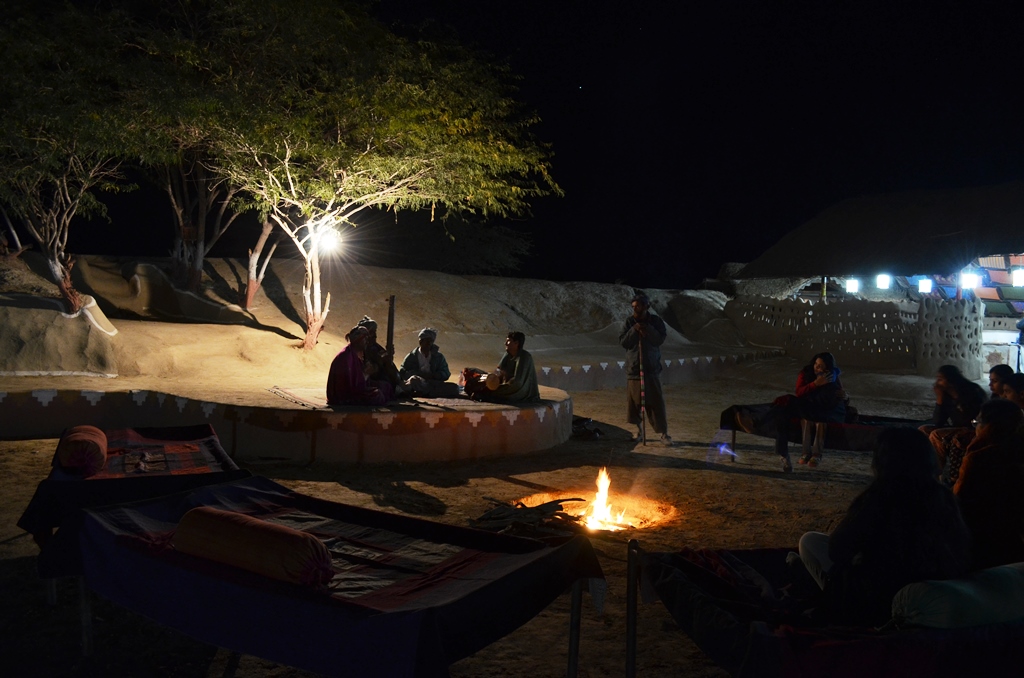 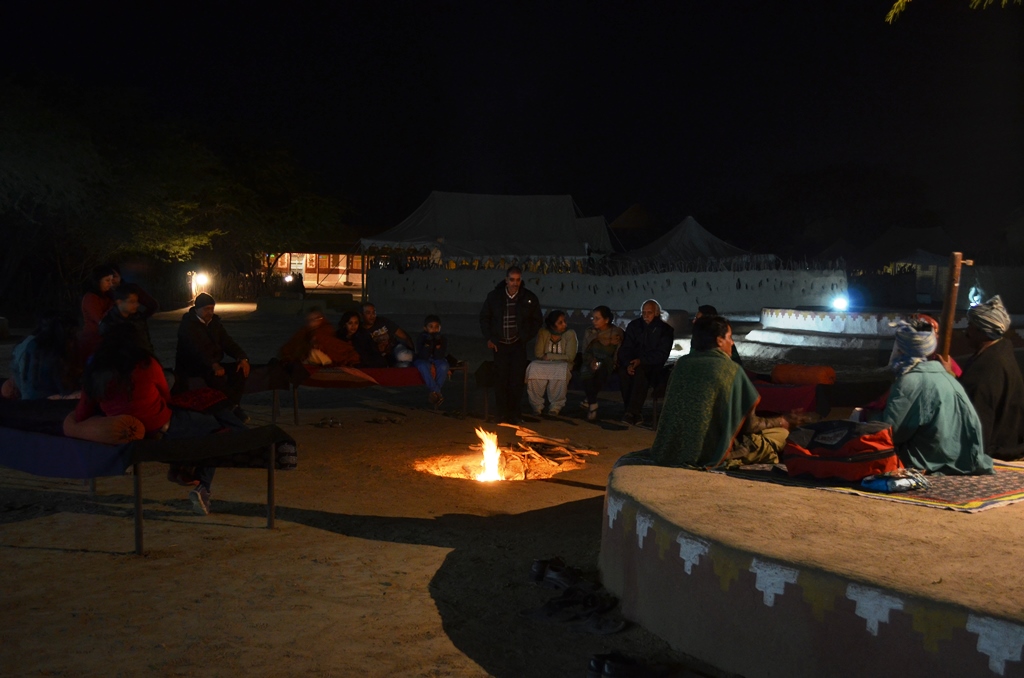 You can see the dining area in the background. Dinner with live music. 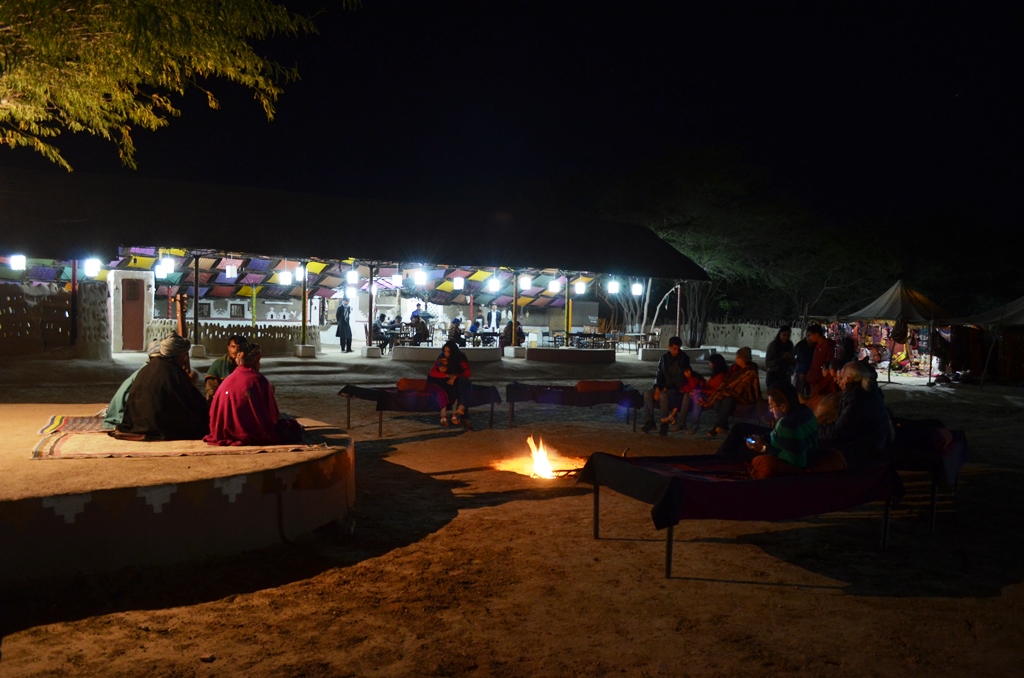 The bonfire was much needed on a cold night 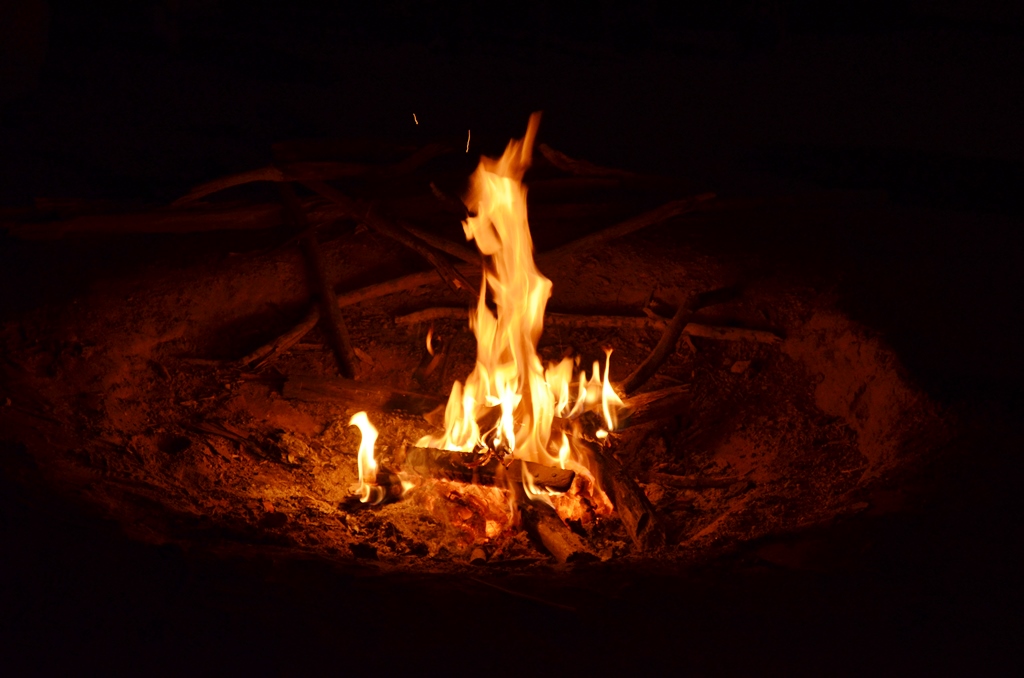 We went back to the hut after sometime, and went to sleep as I would have to wake up very early for going to Chhari Dhand.

I woke up very early in the morning and went out in pitch dark carrying a torch (which proved to be very helpful). Found that the jeep was waiting in the resort parking lot. I was cold and I was covered up, but the doors of the jeep were open and as we started moving, I could feel the chill.

It was pitch dark and we took the road that goes through a small village called Serwo and from there went towards Bhagadiya. Some distance before Bhagadiya, the driver took the jeep off road, and entered the desert. The kaccha road was bumpy at times but not too bad. We could only see what the jeep's powerful headlights fell upon, but the driver seemed to know his way. The night sky was beautiful and I could the stars clearly and even saw a shooting star.

The route taken. The kaccha road we took cannot be shown in google maps, so I have drawn it with a black line.

Finally, about driving for about 20 mins on the Kaccha road, we came to a concrete watch tower and the driver said we had arrived at Chhari Dhand.

06:25 - Reached Chhari Dhand. It was still pitch dark and when I got down from the jeep, I noticed that I was completely covered in dust, courtesy driving through the desert on kaccha road. I took the torch and walked with the driver towards the wetlands, and we could hear the birds making sound. I did not want to go anywhere close in the dark with the torch, as that would have scared the birds away. So we walked back to the jeep, and waited for some light.

Finally, just before 07:00, there was some light on the horizon, and we got out of the jeep and started walking towards the wetlands. We walked about 300 mts, before coming to the edge of the wetlands and could not go any further.

The Chari-Dhand wetland conservation reserve is located on the edge of arid Banni grasslands and the marshy salt flats of the Rann of Kutch in Kutch District, Gujarat State in India. It is currently legally protected under the status as a Protected or Reserve Forest in India. Chari means salt affected and Dhand means shallow wetland, Dhand is a Sindhi word for a shallow saucer shaped depression. This is a seasonal desert wetland and only gets swampy during a good monsoon, receiving water from the north flowing rivers as well as from the huge catchment areas of many surrounding big hills.

I was a bit disappointed, because the birds were very far and even with full zoom on my 55-300mm, I could not clearly capture any of them. Hence I started taking photographs of the surroundings. The birds were making quite some noise early in the morning.

Some pictures taken at Chhari Dhand before dawn. 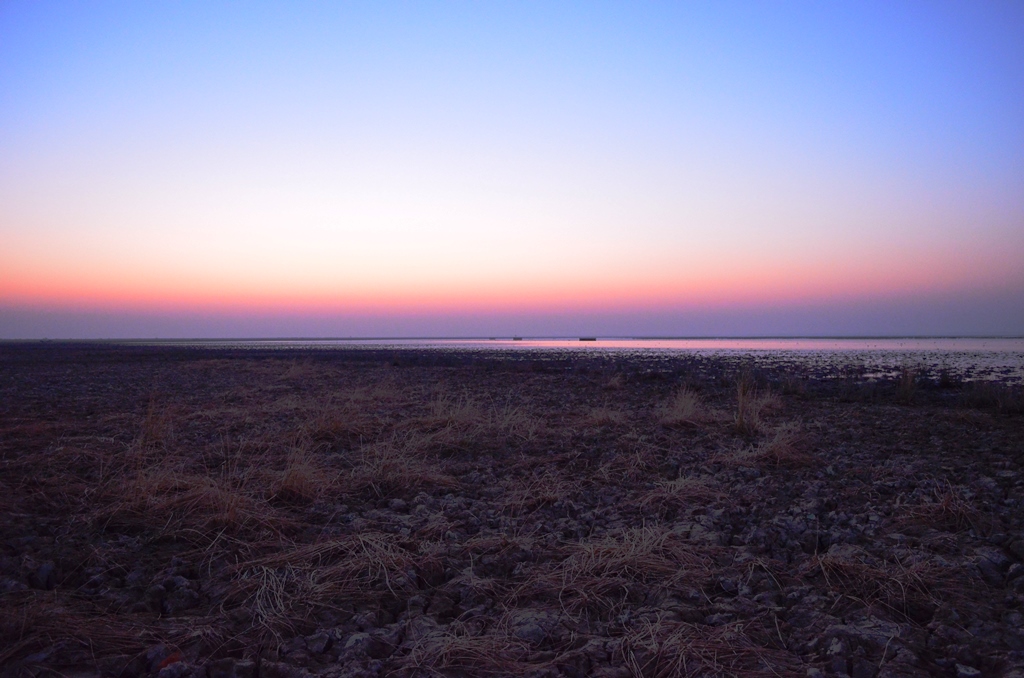 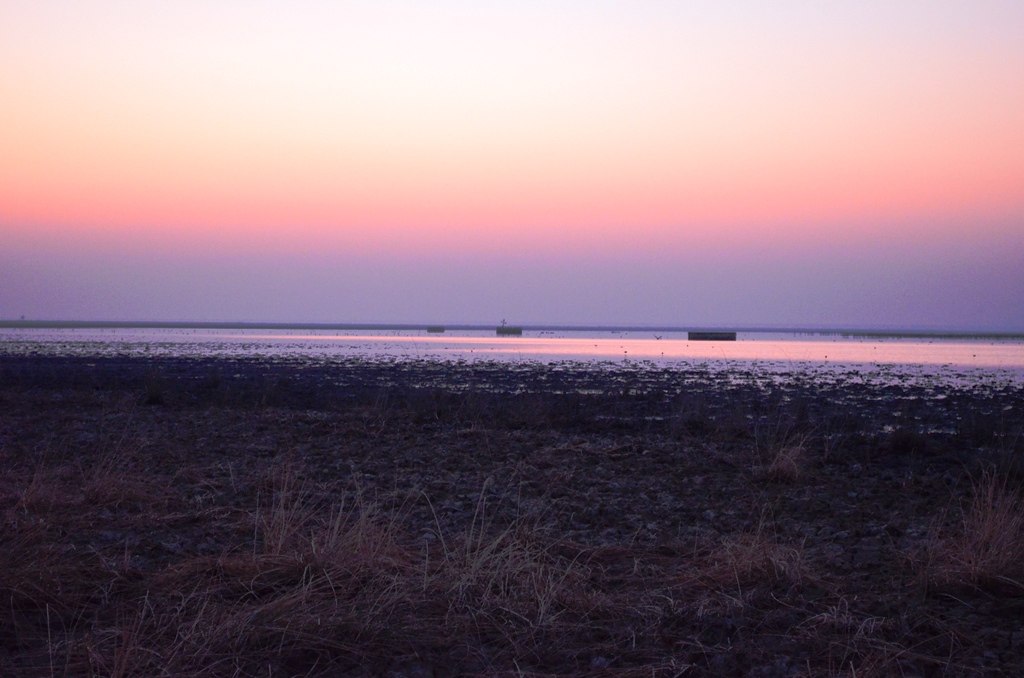 As I said, the birds were very far away. So could not take any good pictures of the birds. 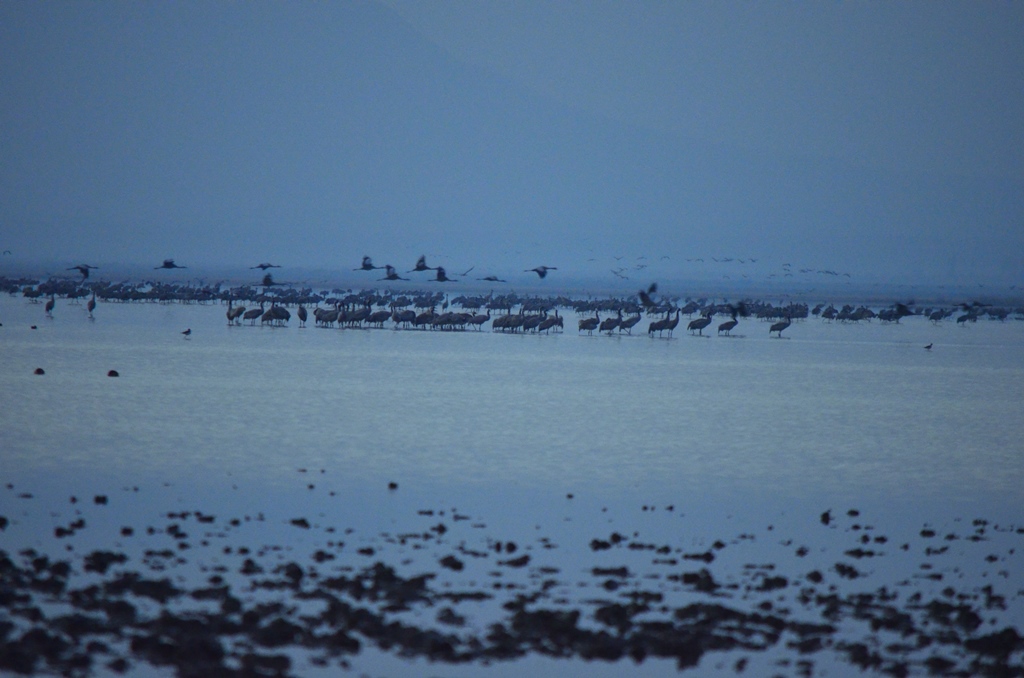 This is the concrete watch tower where we parked the jeep. The driver said that they had half abandoned building a hotel. 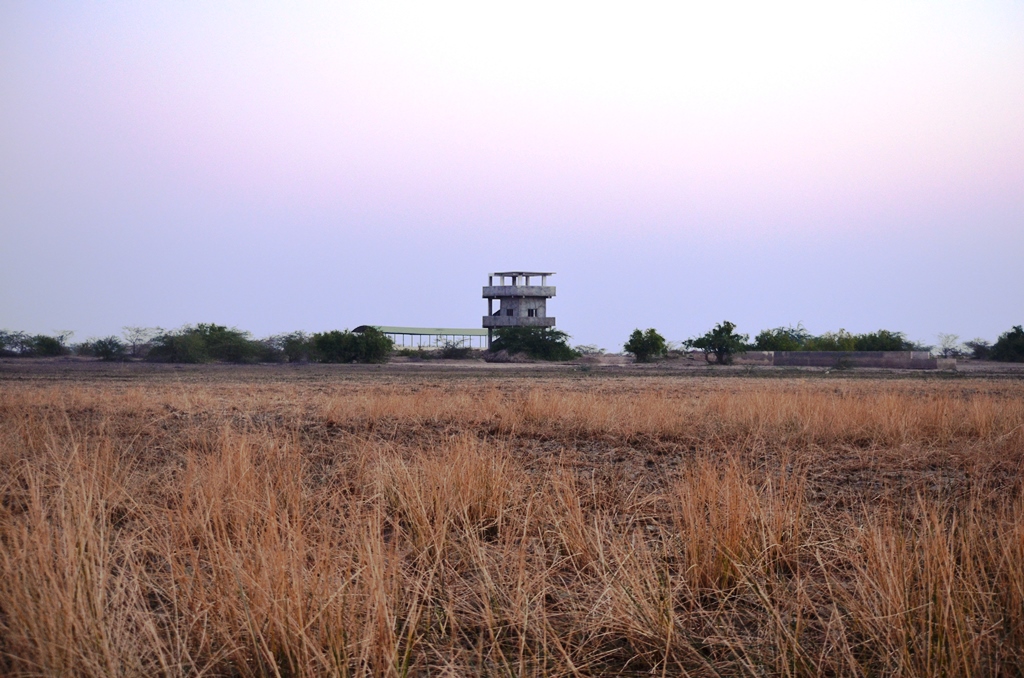 While taking pictures of the surroundings, we heard a dog barking behind us and he was slowly moving in our direction. The driver picked up a stick from nearby, and I waved my tripod in the air and soon he went the other way.

After taking pictures and watching nature's beauty all around, after half hour, I decided that it was time to move on as the birds were not coming any closer. And just as I was about to leave, I saw the sun coming up and stopped dead at the beautiful sight. 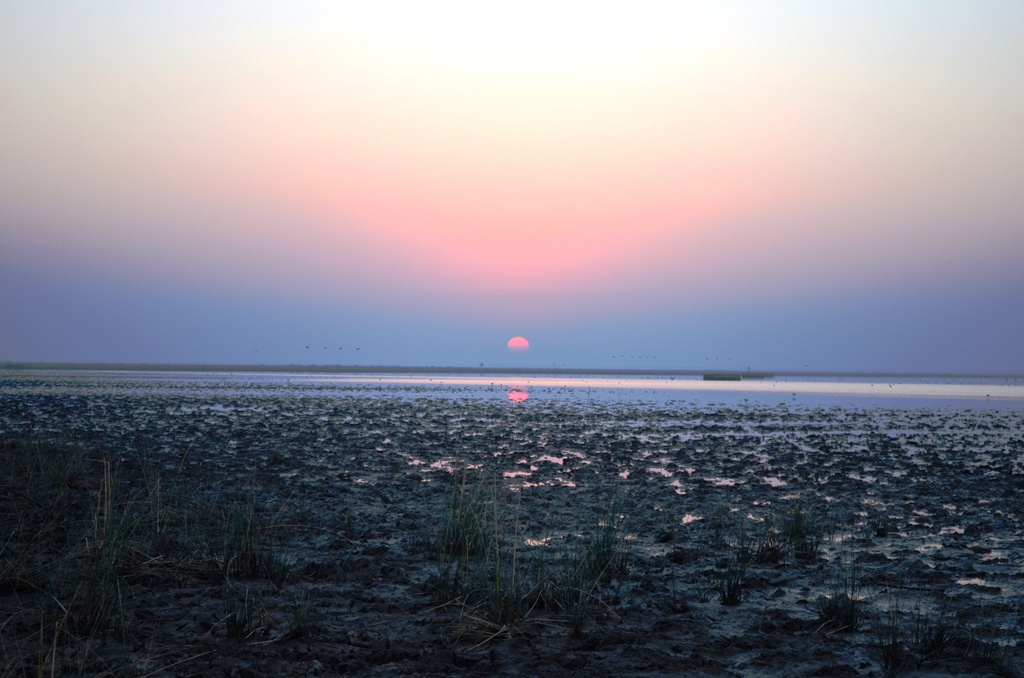 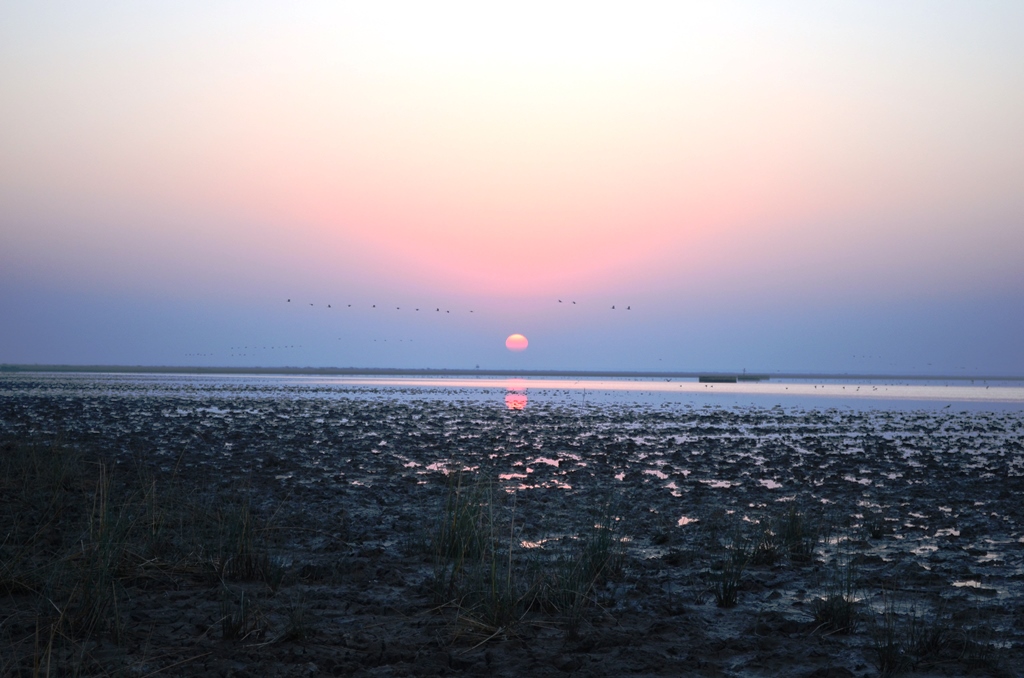 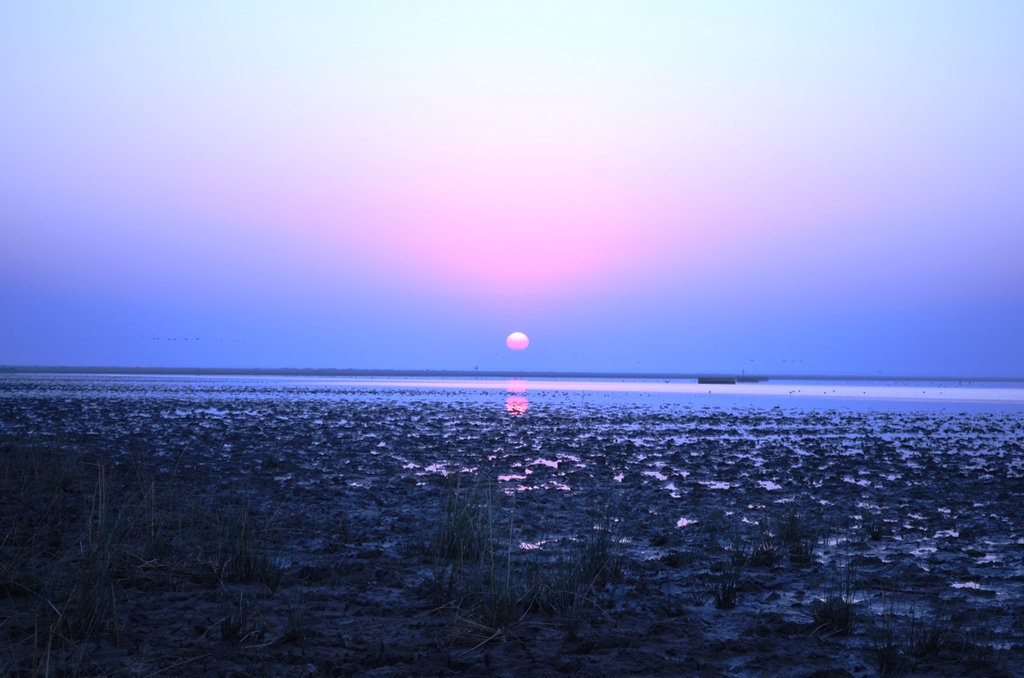 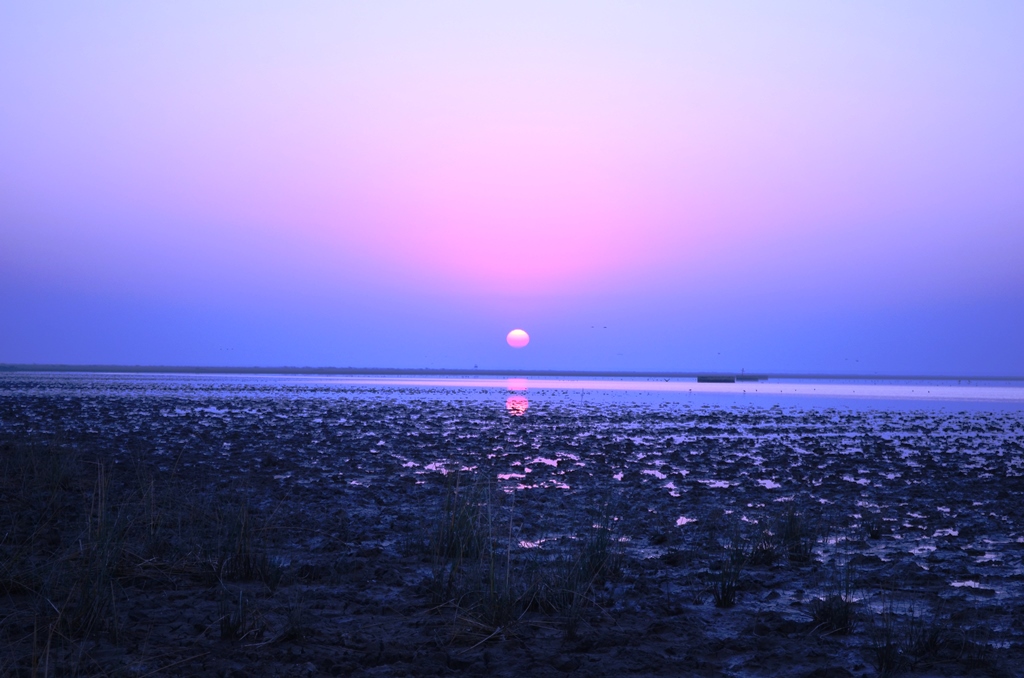 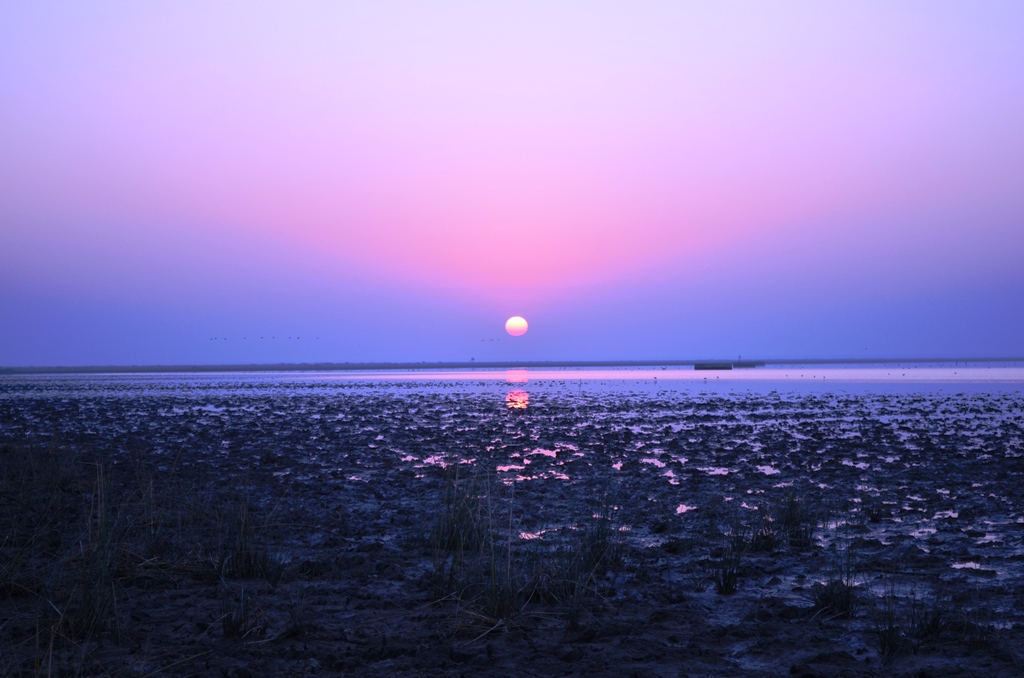 After watching the sunrise, I left from Chhari Dhand as had a full day ahead of us.

lovely updates Sachin. Shame about the birds being far away. Is the white desert actually salt flats? just curious.

Superb Sachin!! I can feel the place!!

Thank you KD Sir. Chhari Dhand was unfruitful with respect to birds but an experience none the less. The White Desert is very much covered with salt, although there is no commercial salt field in that part (Dhordo) to my knowledge. We actually picked up a grain and tasted it to confirm that it is salt.


Shantanu Roy said:
Superb Sachin!! I can feel the place!!
Click to expand...

Thanks Shantanu for the compliment

Thank You Shekar for your continued support

My bad.... How could I miss such an excellent travelogue...!!

You travelogue is like bible of Gujarat tourism..!!
Very informative with excellent pics ....!!

thanks for sharing such wonderful travelogue...!!

drvictor19 said:
My bad.... How could I miss such an excellent travelogue...!!

You travelogue is like bible of Gujarat tourism..!!
Very informative with excellent pics ....!!

thanks for sharing such wonderful travelogue...!!
Click to expand...

Koi nahi Doc sahab . Thank you for your generous words.