We got ready, had our breakfast and left for the day from the resort. We had planned to visit some arts and handicrafts shops in the Hodka village. Total distance covered on the trip so far 2112 Kms.

In the couple of such shops that we went to, there wasn't anyone to show the items on sale, and we found the shops were without much light, so judging the colour etc. was a bit difficult. So we decided to do the shopping at Rann Utsav or at the arts and handicrafts shop in Shaam E Sarhad resort.

10:25 - Reached Khavda. Filled Diesel worth INR 1350 in here. Note that this is the only petrol pump around for a long distance. You can also get your tyre air pressure checked in the petrol pump and the machine is manned by a native of Bihar and called the "Bihar tyre service".

From Khavda, we proceeded towards Kalo Dungar.

About 8 Kms from Khavda, you come to this right turn which points to Shri Datt Mandir which is on top of Kalo Dungar. Take the right here for Kalo Dungar. Else the straight road goes to India Bridge. 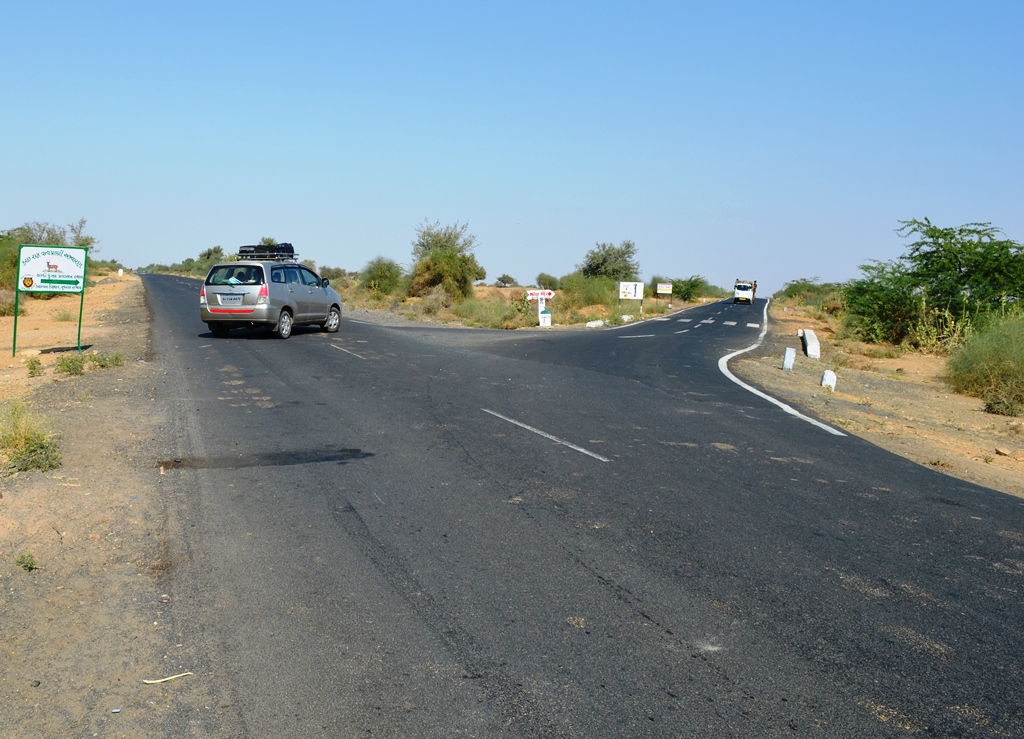 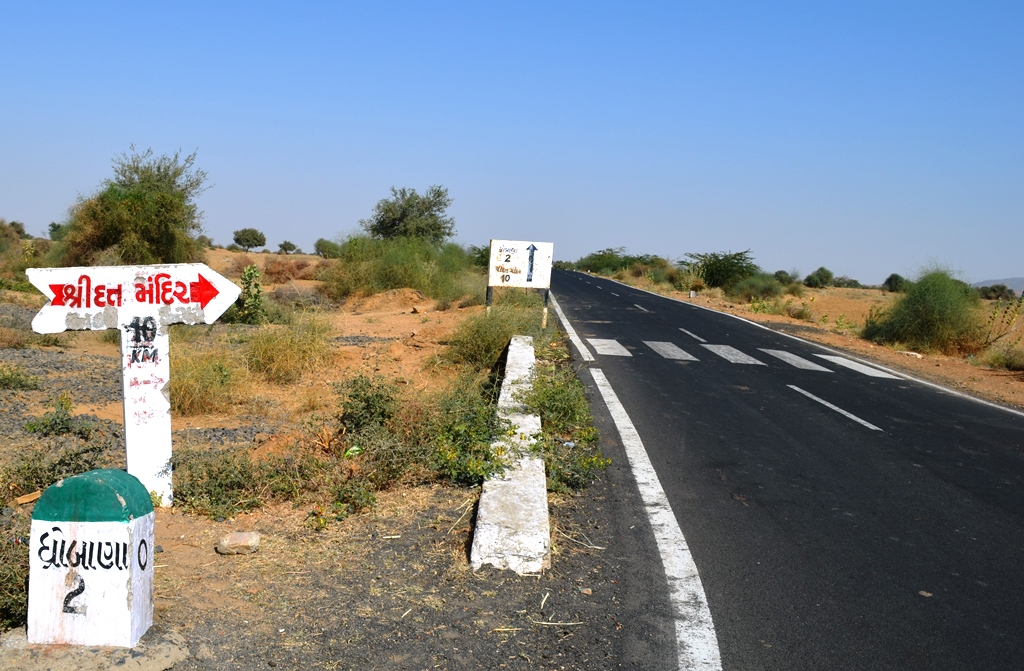 As you climb up the road towards the top of Kalo Dungar, the road is very narrow in some places. Some parts of the road are not as smooth as the roads in Gujarat but I will not term it bad either.

Kalo Dungar or Black Hill is the highest point in Kutch, Gujarat, India, at 462 m. It is located at 97 km from District headquarters of Bhuj and 25 km from nearest town Khavda.

This is probably the only place in Kachchh from where a panoramic view of the Great Rann of Kutch is possible. Since it is located very near to the Pakistan border, there is an Army post at the top; beyond here, only military personnel are allowed.

The Kalo Dungar is also famous for a 400 year old Dattatreya temple. Legend says that when Dattatreya walked on the earth, he stopped at the Black Hills and found a band of starving jackals. Being a god, he offered them his body to eat and as they ate, his body continually regenerated itself. Because of this, for the last four centuries, the priest at the temple has prepared a batch of prasad, cooked rice, that is fed to the jackals after the evening aarti.

Note - I have read it in other forums that there is at times traffic jam at the top as parking space is limited when it gets crowded, and due to the narrow road. We did not face any traffic jam and could get parking easily. However, I did overhear a police officer addressing a hawaldar that "Apna kaam hai parking, traffic aur logo ko control main rakhna." (Our job is to manage parking, people and traffic).

We went in to the Datt mandir and completed our darshan and then proceeded onwards to see the views from Kalo Dungar. I will let the pictures do the talking now. 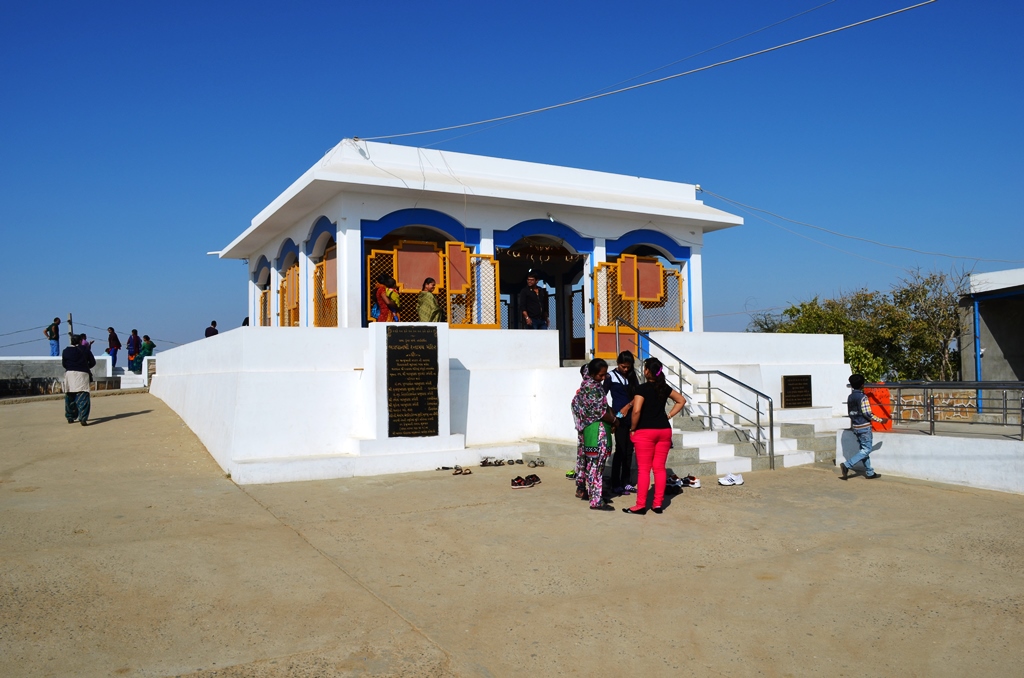 Walking to the top of Kalo Dungar. From the mandir, it's about 300 mts walk. Maybe a little more. There are displays of birds and animals found in the surrounding region along the path with details given about each species. Good initiative. 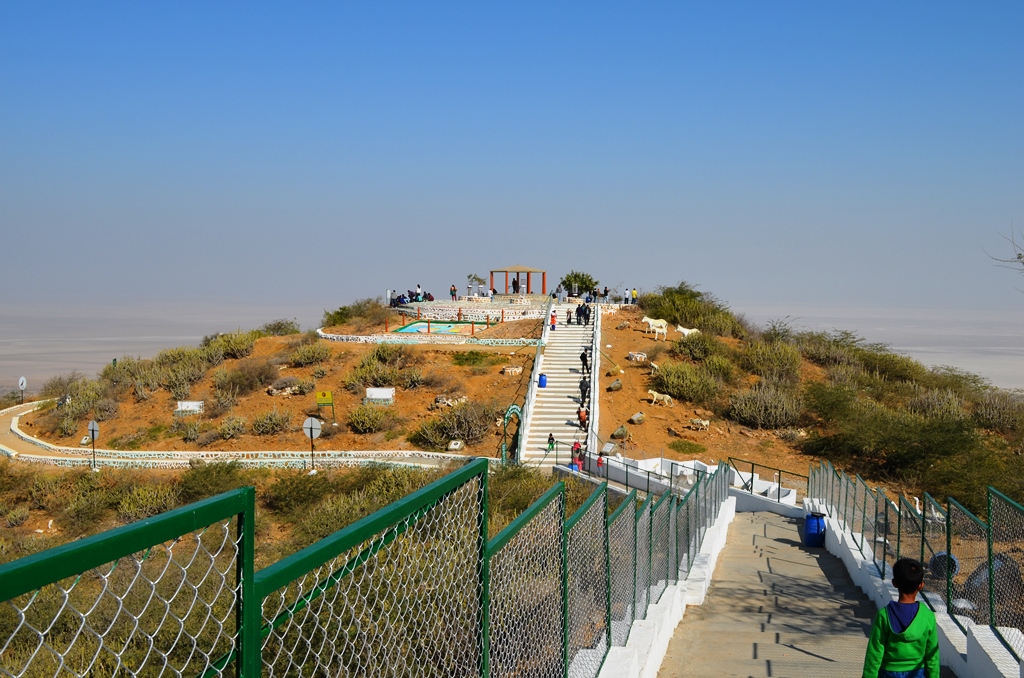 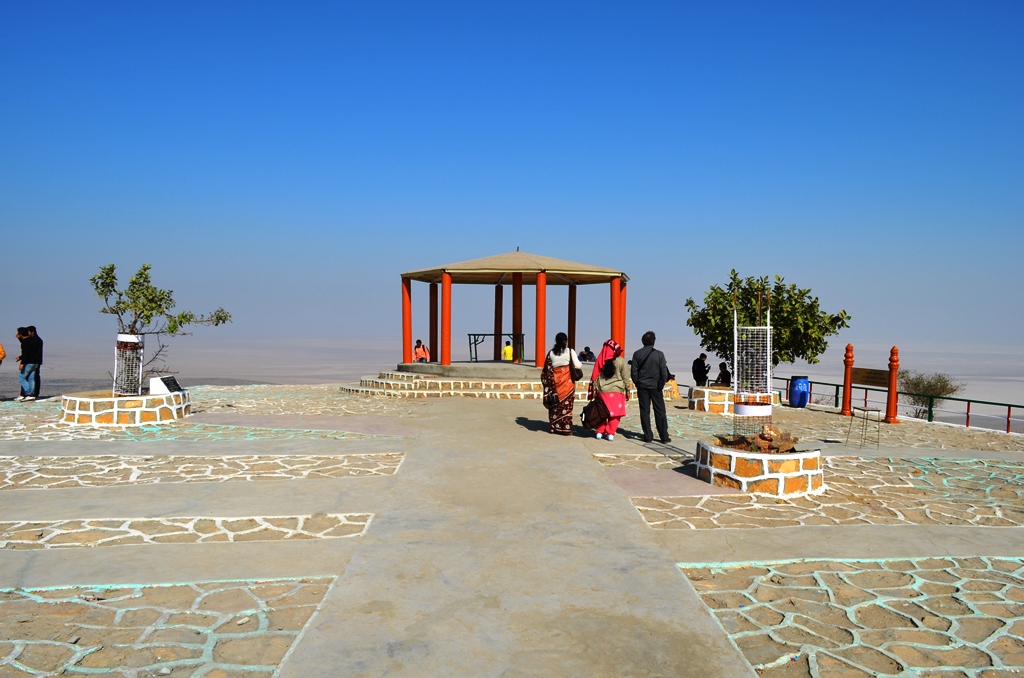 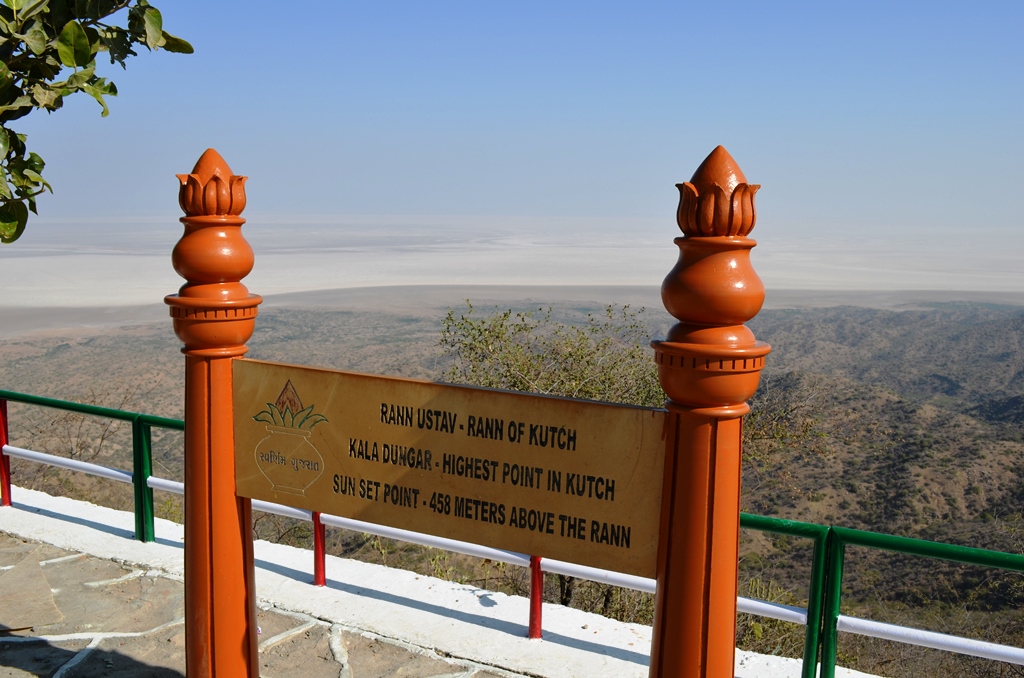 Panoramic view of the Great Rann of Kutch from Kalo Dungar 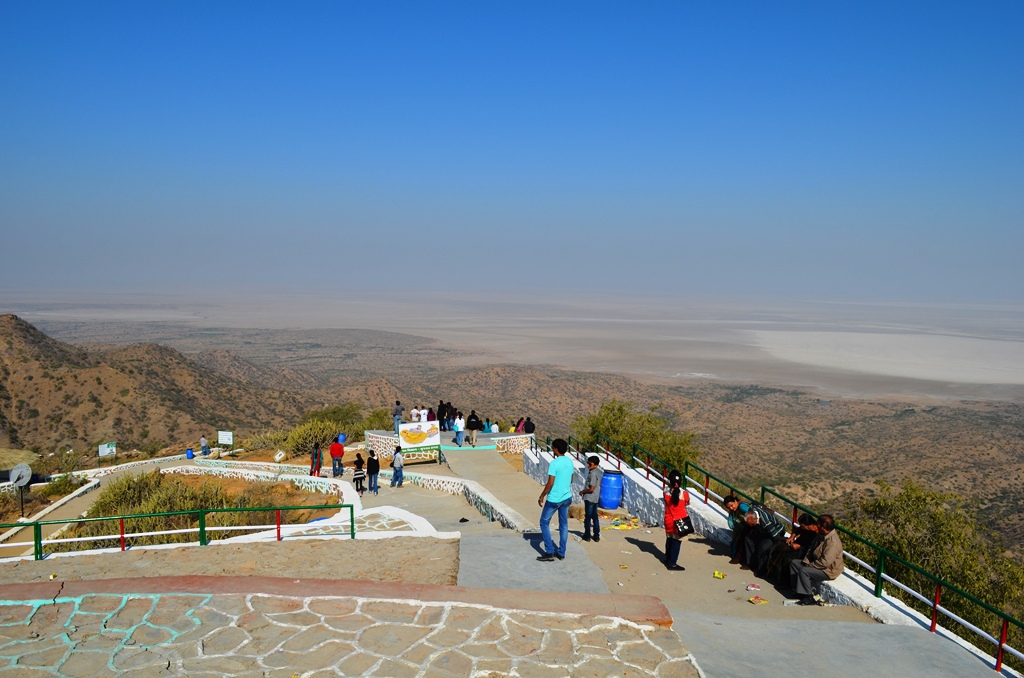 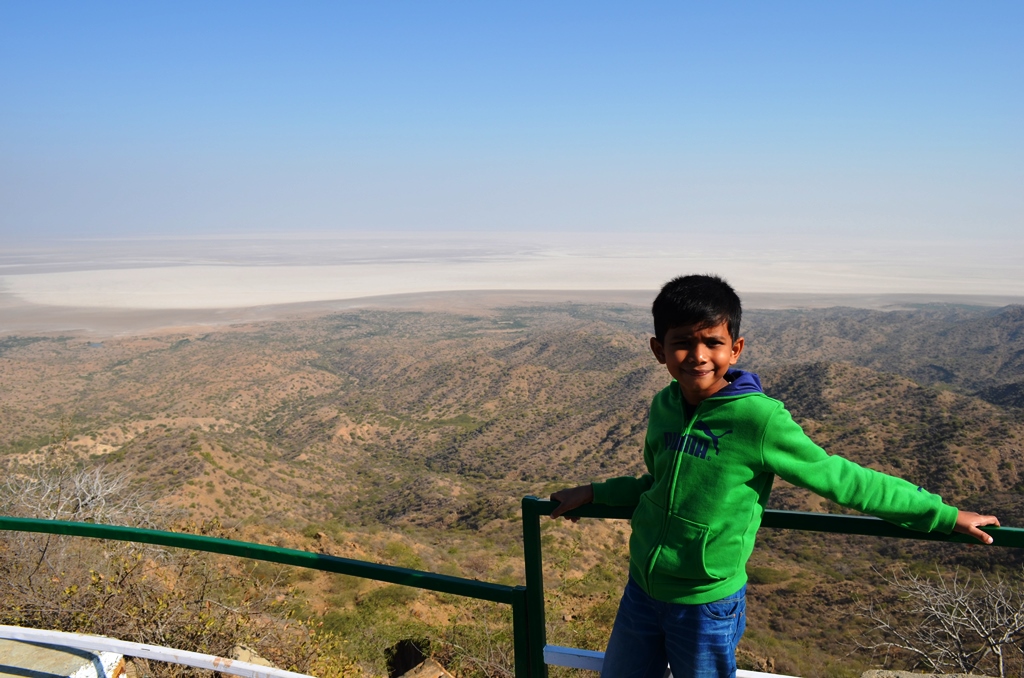 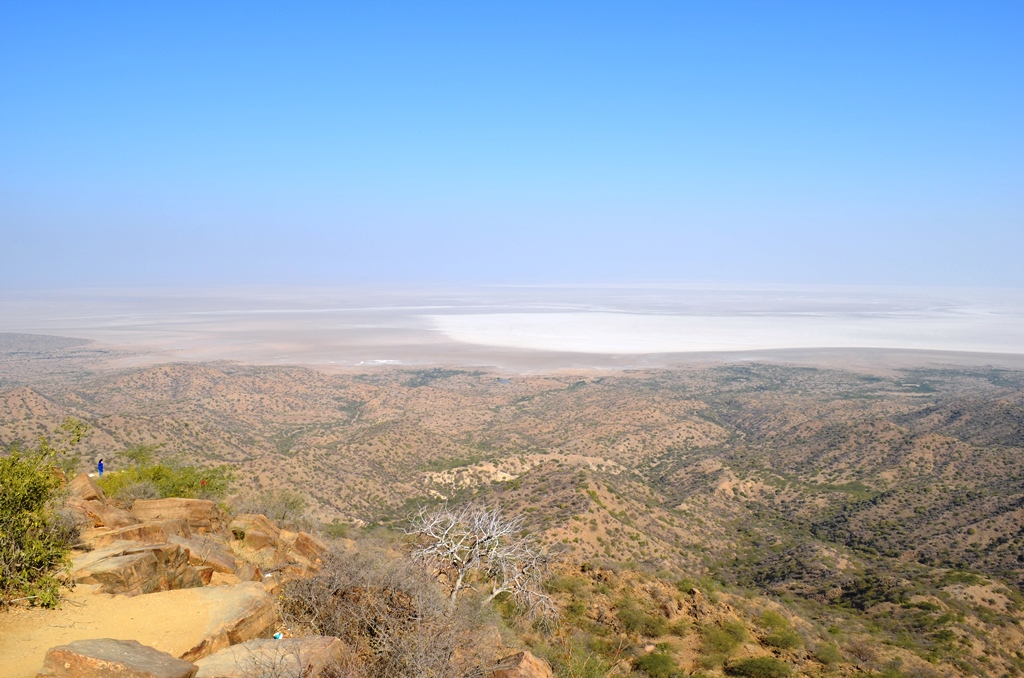 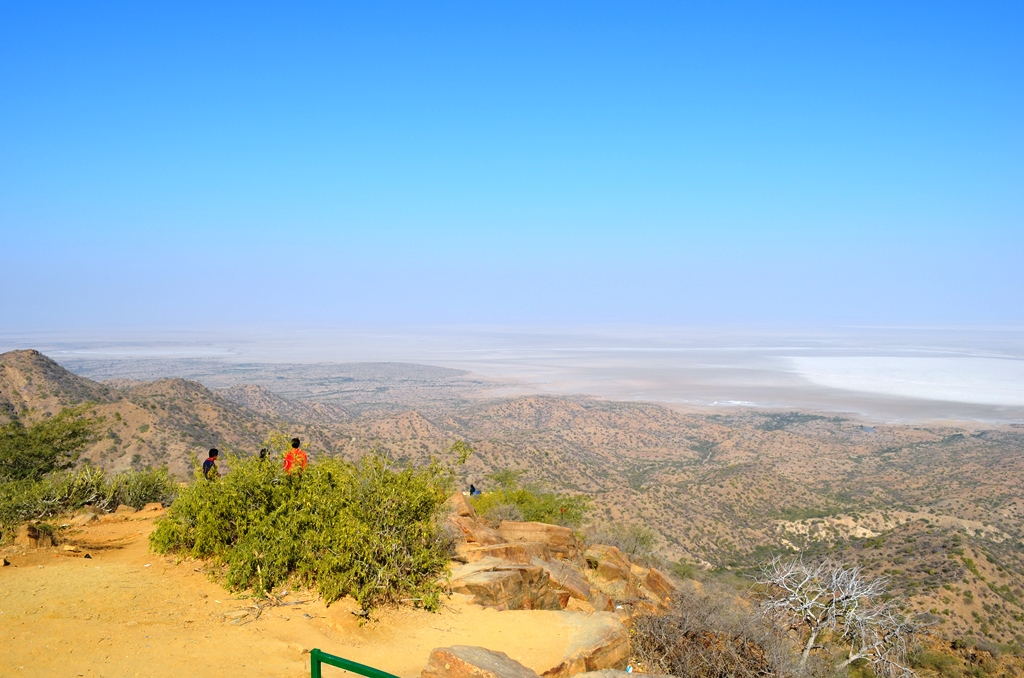 11:40 - We left from Kalo Dungar, before the aarti at the Datt mandir at 12 PM. On the way down saw quite a few vehicles coming up.

12:00 - Reached India Bridge. Vehicles were being allowed to cross the bridge which is very small, but as soon as you cross it there is a check post and you are not allowed to go ahead unless you have a special permit which has to be obtained from Bhuj and is very difficult to get for obvious reasons.

My son asked a jawan posted there "How many Kms is the Pakistan border from here?" and the jawan replied 80Kms.

Note - There are no sign boards which point to "India Bridge", but we the sign boards mention "Kunver Bet".

Note - Photography and Videography at India Bridge is strictly prohibited.

There is nothing to see at India Bridge except for the sense of joy that you drove up to the last point that civilians can drive to without requiring special permissions to go ahead. We spent 10 mins at the spot, and started on the way back to Hodka.

As we were unsure how much time it would take to cover Kalo Dungar and India Bridge, we had told the Shaam E Sarhad staff that we would call in advance if we are coming back to the resort for lunch. So we called them to confirm that we would be back for lunch.

Sachin bhai.. What can I say? Simply splendid

awesome updates all along, however it will be really helpful if you could help me with a small piece of information. I see that you based out at Bhuj and covered all the surrounding places like Lakhpat, Mandvi, Narayan Sarovar etc. Would you happen to know/see any places to see somewhere around Mandvi? Just wondering if there are other options to bunk except Bhuj

On the whole, as i said before, am glued to this thread, for obvious reasons and thanking you for such details about every place is not just enough!

This travelogue is going to be a ready reckoner for anyone planning a GJ visit!

I saw it through your lens..!!

Lovely Pics, You got Fabulous Views from Kalo Dungar ~ We weren't that Lucky

Beautiful sunset captures Sachin. What is this white at desert, is it sand or salt? Nice views from Kalo Dunger.

After the traffic jams experienced yesterday, we had decided that we would go to Rann Utsav early today, complete the shopping and visit the White Desert much before the time for sunset. Having seen the sunset yesterday, we did not want to experience it once more, as we would get to see sunset in LRK as well.

Accordingly we had our lunch a the Shaam E Sarhad resort and at 14:20 left for Rann Utsav in Dhordo.

As I am very impatient when it comes to shopping, my wife asked me to take my son to the library in Rann Utsav while she did the shopping. I did just that, but the library mostly had books written in Gujarati about the Kutch region. Also they were kept under lock and key and you had to make an entry to take a book out. We browsed the library for a while and then came out.

My wife had purchased some shawls and handicrafts from the Rann Utsav stalls by then. She did not buy the bed sheets / bed covers as she thought the one's you get in Rajasthan are better.

So we left from Rann Utsav and drove straight ahead for about 4-5 Kms to the White Desert. This time there was no traffic jam as it was just about 4PM and long time for sunset. We spent some time marvelling at the wonder of nature that is the White Desert, and left from there much before the sunset to avoid traffic.

Some pictures of the White Desert. 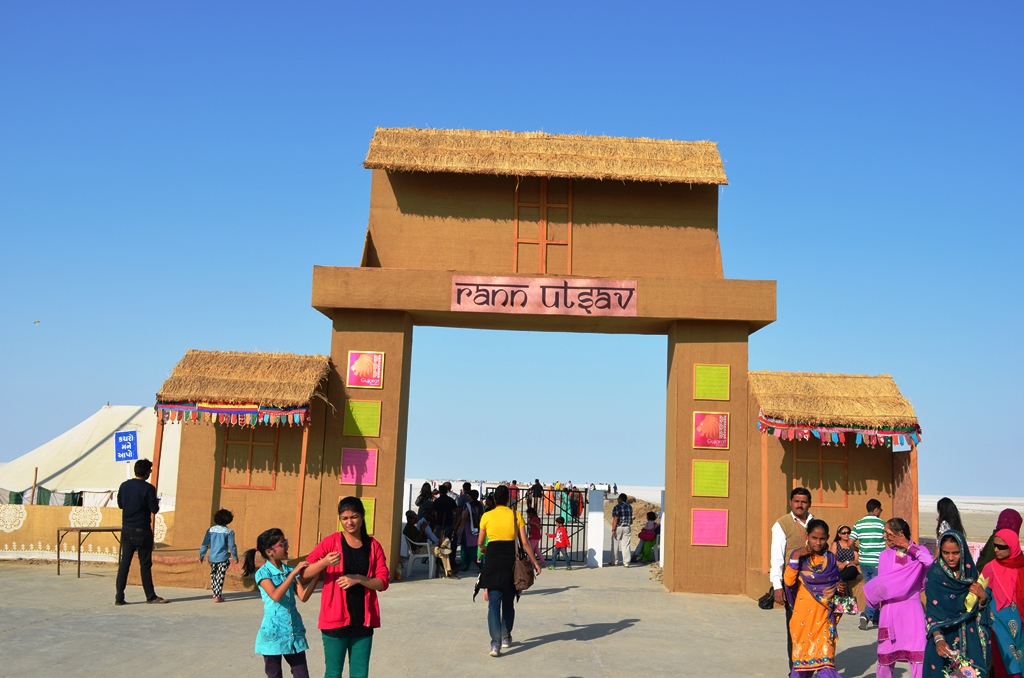 You have this road that runs along for about 1.5 to 2 Kms and you can walk on it with the White Rann on both sides and venture in the Rann. Vehicles are not allowed on this road. There are camel carts for the disabled and elderly which are free of cost so they can enjoy too. 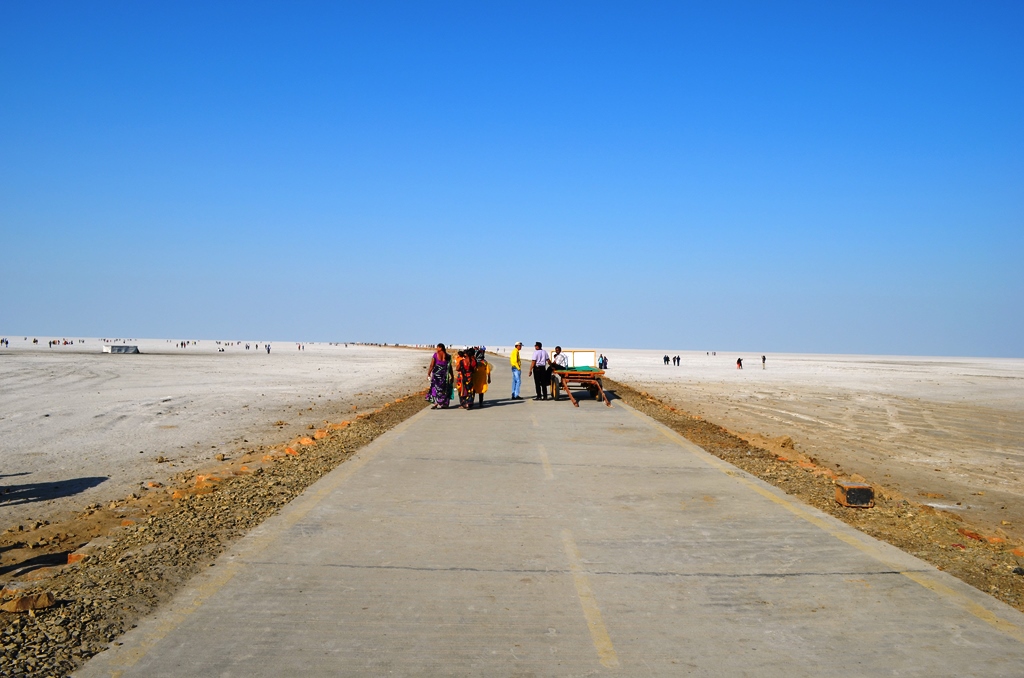 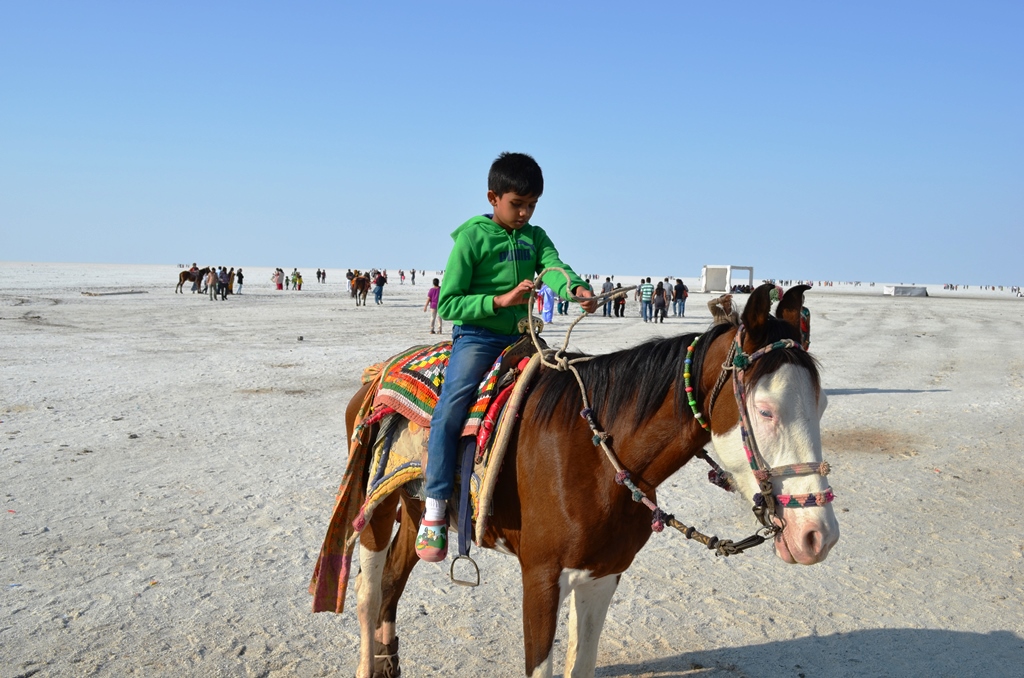 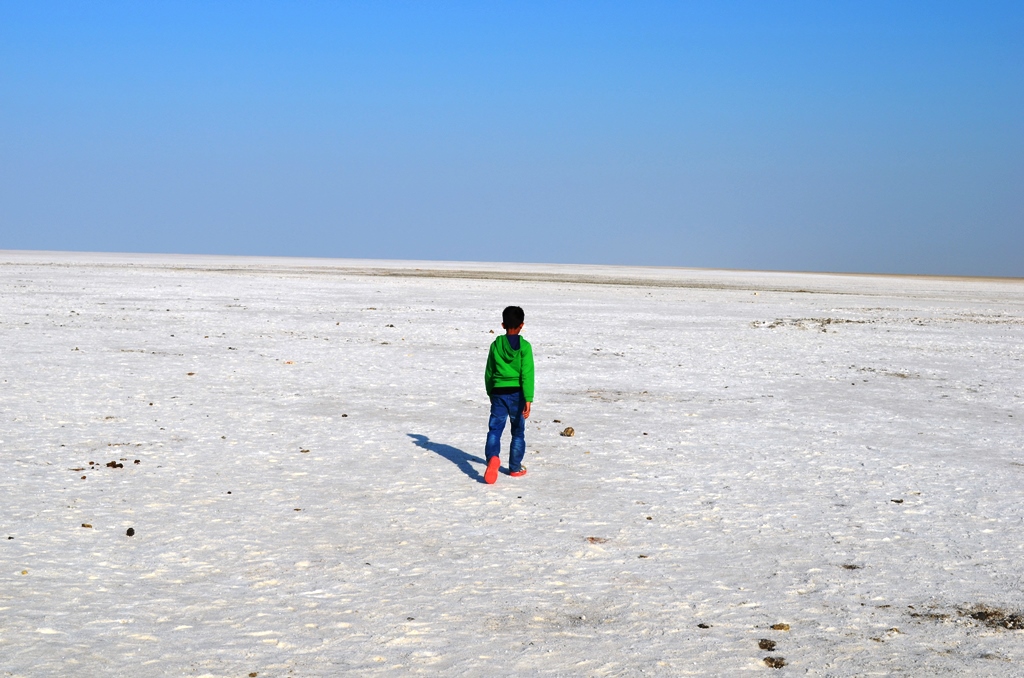 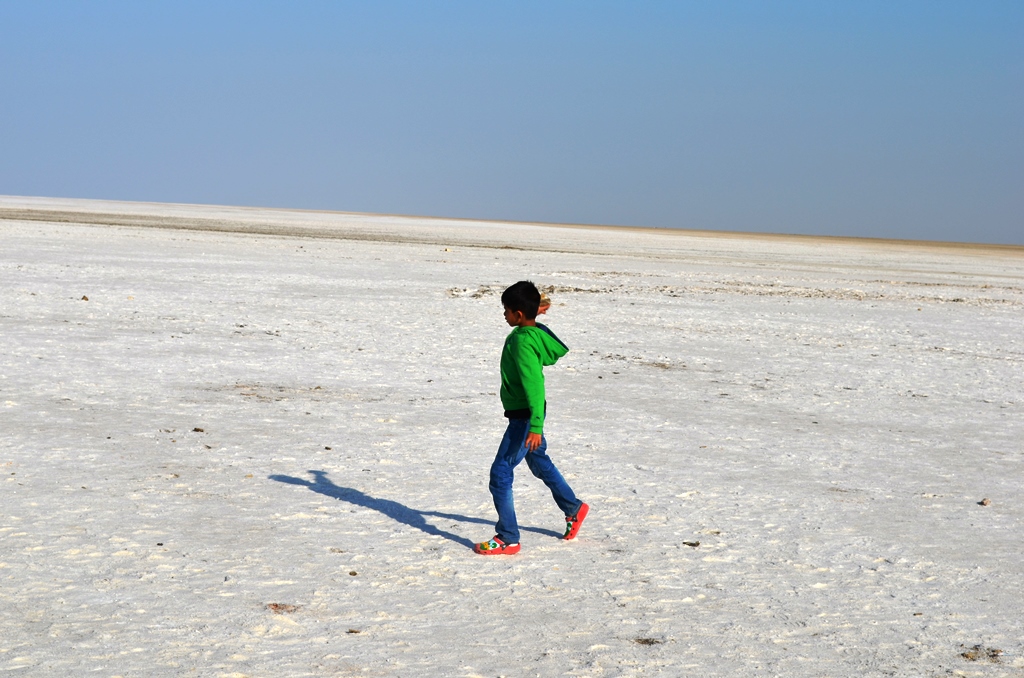 As part of the Rann Utsav, cultural shows are also held in the White Desert. You can see the small stage where the artists were preparing for their performance. 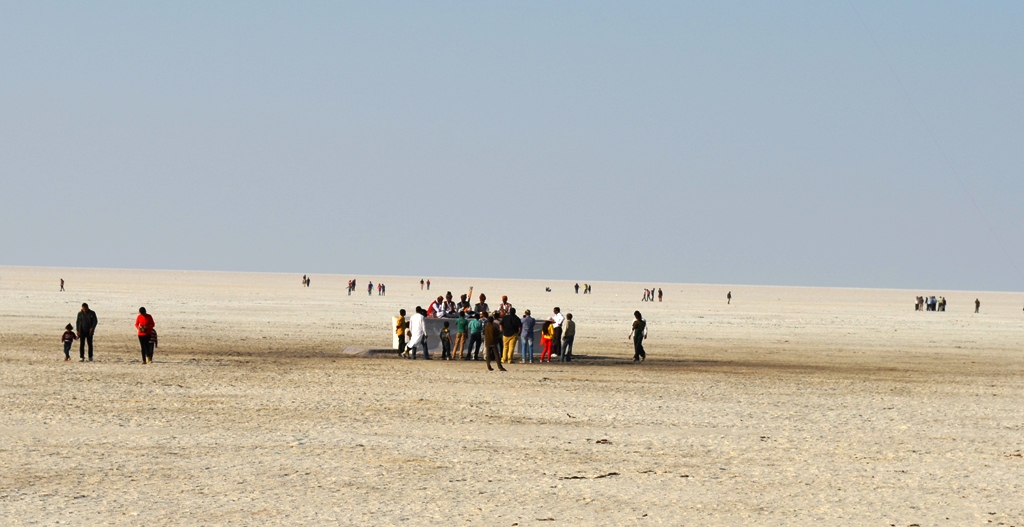 We went back to the resort and spent a couple of hours reading or relaxing in the Bhunga Hut. We had early dinner, spent some time by the bonfire listening to the live performance and went to bed early. We aimed to start early the next morning as we had to reach Zainabad in time for the safari and it was a long drive. We aimed to reach in time for lunch, so we could relax a bit after lunch before the safari in LRK.

amitw79 said:
Sachin bhai.. What can I say? Simply splendid

Loved all the sunset shots especially
Click to expand...

Thanks Amit for your kind words


SuvraGanguly said:
awesome updates all along, however it will be really helpful if you could help me with a small piece of information. I see that you based out at Bhuj and covered all the surrounding places like Lakhpat, Mandvi, Narayan Sarovar etc. Would you happen to know/see any places to see somewhere around Mandvi? Just wondering if there are other options to bunk except Bhuj

On the whole, as i said before, am glued to this thread, for obvious reasons and thanking you for such details about every place is not just enough!

Once again thanks much Suvra . The reason that Bhuj is popular as the base to cover Kutch is because it's well connected, has plenty of hotels and is more central to all the attractions in Kutch. However, if you want to cover all the attractions in Mandvi and around, you have the option to bunk in Mandvi for a night. Usually if you do the Lakhpat, Narayan Sarovar, Koteshwar, Mandvi circuit, you will reach Mandvi late afternoon or evening which leaves you no time to cover both the Vijay Vilas palace and the sunset at Mandvi beach. Hence you may want to stay overnight in Mandvi. The attractions around Mandvi are mainly ports like Mundhra, Adani, Kandla etc. if you are interested, and there are some shipbuilding yards in Mandvi and probably around as well. If you are interested in Jain history and temples then you can visit Koday and Bhadreshwar. So it depends on the number of days you have in hand and interest, but yes if you have enough time then you can stay in Mandvi for a night and cover all places in and around Mandvi.


BenHur said:
This travelogue is going to be a ready reckoner for anyone planning a GJ visit!
Click to expand...

I saw it through your lens..!!

Thanks Doc . Once you finish your epic Ladakh log, please start the Gujarat one for our benefit.


ashish0712 said:
Lovely Pics, You got Fabulous Views from Kalo Dungar ~ We weren't that Lucky
Click to expand...

Thanks Ashish . The weather was clear and not hazy on the day we went.


Shekar Reddy said:
Beautiful sunset captures Sachin. What is this white at desert, is it sand or salt? Nice views from Kalo Dunger.
Click to expand...

Thanks Shekar for your appreciation and that is salt.
K

Fentastic journey Sachin! Amazing road trip with family i must say. You are so lucky to see those bunch of lions/lioness. Thats awesome .

Did u happen to go beyond India Bridge? BTW, Did you try Maav (a sweet made of milk) in Bhirandiara? Its so delicious. I had it on both days of my pass through via Bhirandiara.
You must log in or register to reply here.
Share:
Facebook Twitter Reddit Pinterest WhatsApp Email
Top