This trip has been in the making for a while now, almost a year. In a way, longer than that, since Mansi had been dreaming of driving her Alto to Rajasthan for quite a while longer than that.

However, for one reason or the other, this trip had been delayed.

So when we planned to travel to Rajasthan from 14th to 18th of Feb 2018, and a couple of friends who had confirmed earlier dropped out, we knew this was a make or break point with chance of doing this trip being zero this year, if we postponed it now.

So we decided to go ahead with this trip, no matter what, even though neither of us was 100% sure until the last minute due to work and family commitments.

On top of that, Mansi has never driven her car more than 250 km and I hadn’t driven a car in over 13 years. So she had to drive her car for the entire length of the trip, and she wasn’t sure if she would be able to do this.

I, on the other hand, was pretty sure she will be able to do it. For the passion for travel runs deep in her.

With inputs from @SachinOnTop, @walker and @bhuwan singh our trip plan was almost sorted out. Though we didn’t plan a lot or go into too many details. Hoping to figure out things on the go.

It was around 5:30 in the morning, when Mansi reached my home, after driving around 40 km from her place. We loaded my luggage as fast as we could and began our journey towards the Jaipur. It was still dark and thankfully, traffic although still there, wasn’t a lot. 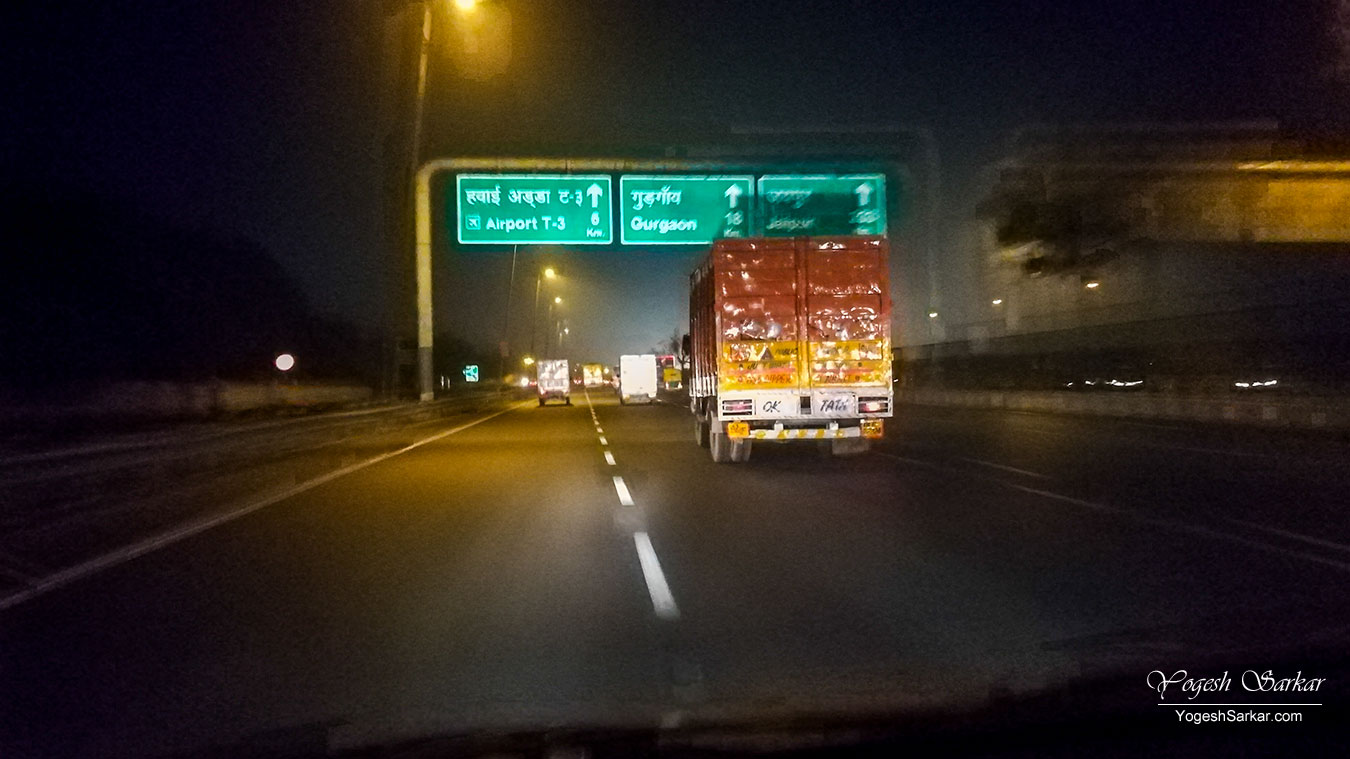 After crossing the KM 42 toll just before Manesar and paying for the first of the 7 tolls we were to encounter today, we decided to take a quick pitstop at Manesar McDonald (24x7). After buying a cold drink from there, we got on our way.

We were in good spirits and Mansi was driving quite well and we were making quick progress. It was only when we encountered fog around Dharuhera, that we slowed down a little. 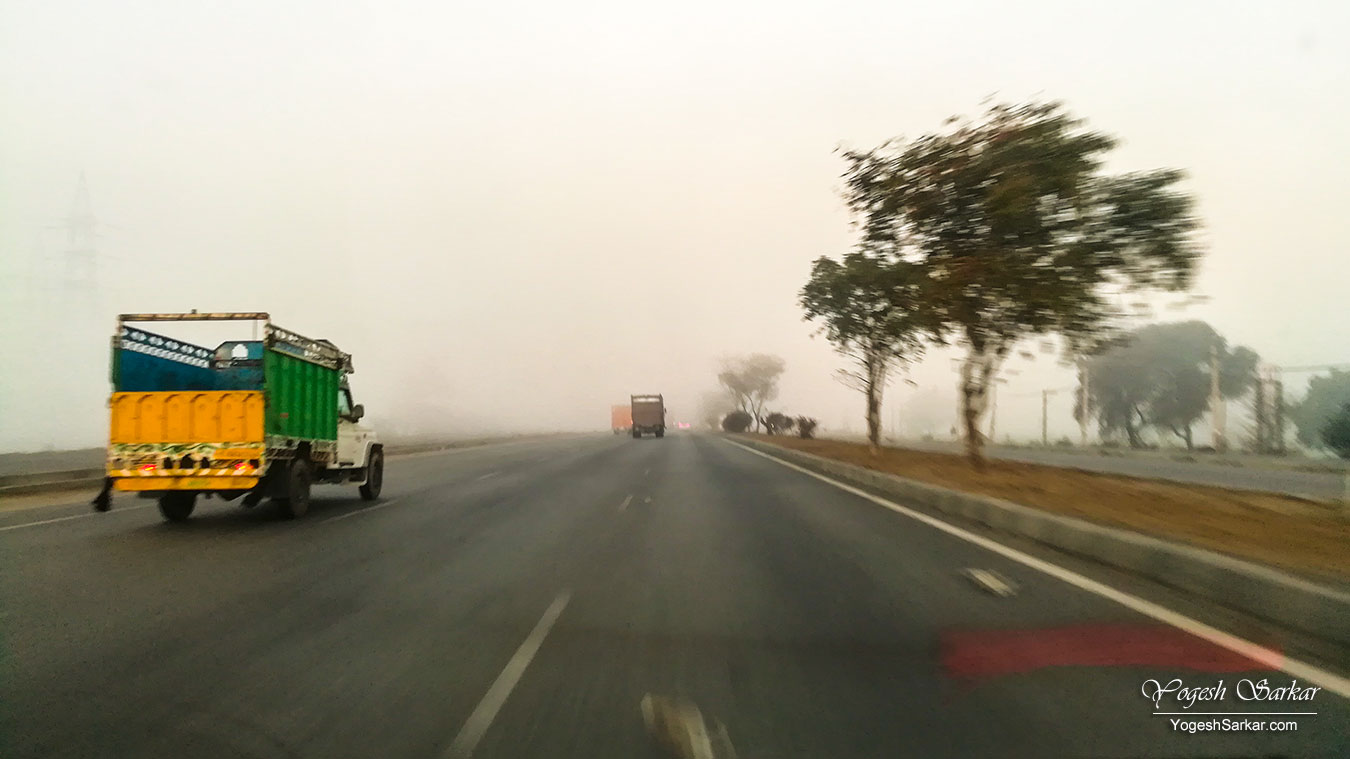 Google Maps were showing us multiple routes to reach Bikaner. However, we had been advised by Bhuwan sir to take the route via Jaipur.

Unfortunately, Google was showing just about all the routes, except this one. So when we stopped at The Highway King for breakfast around 8:25 am, I posted the query in the BCMTouring WhatsApp Group regarding which route to take and received prompt replies from Dhiraj Kaushik and Ujwal Mahajan, which helped us choose the correct route.

Of course, apart from finding the correct route, we had also stopped to have the much needed breakfast and that too at my usual breakfast stop on NH 48, The Highway King at Shahpura. 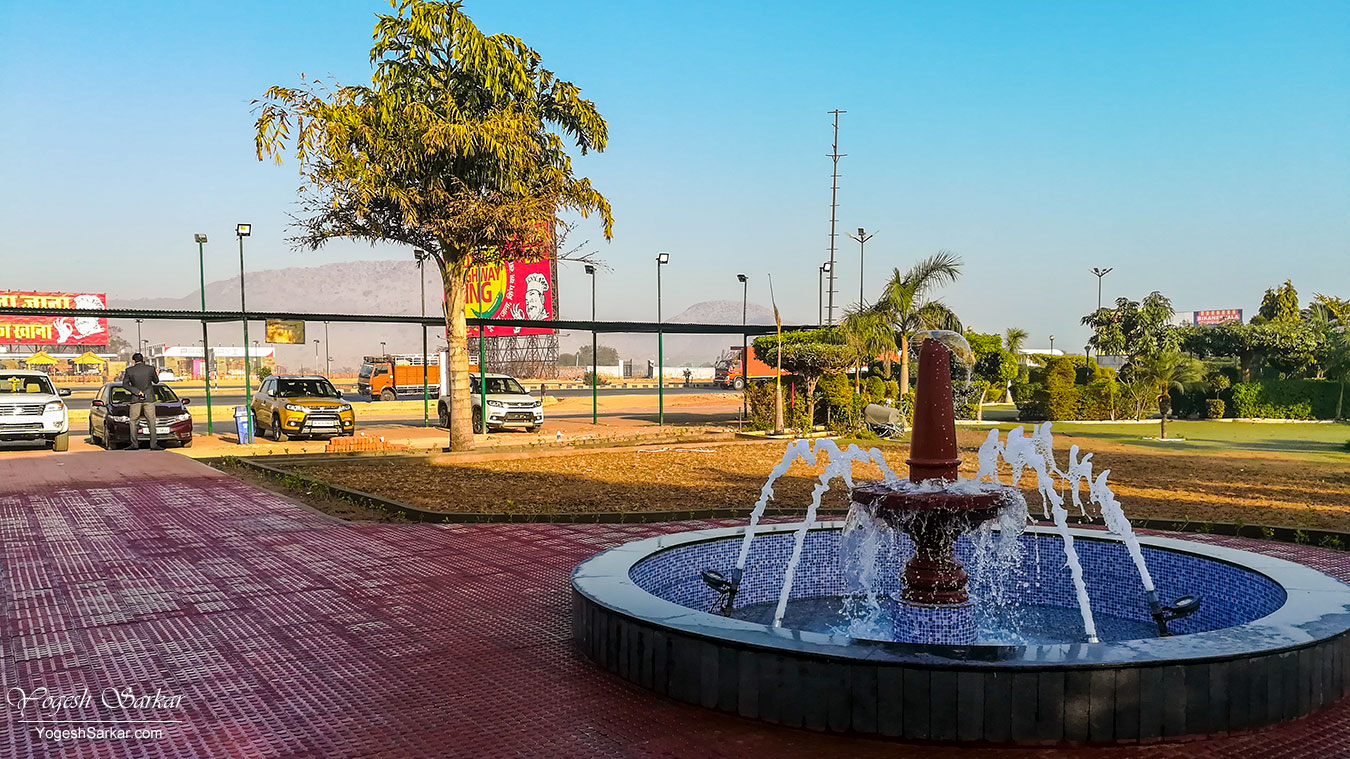 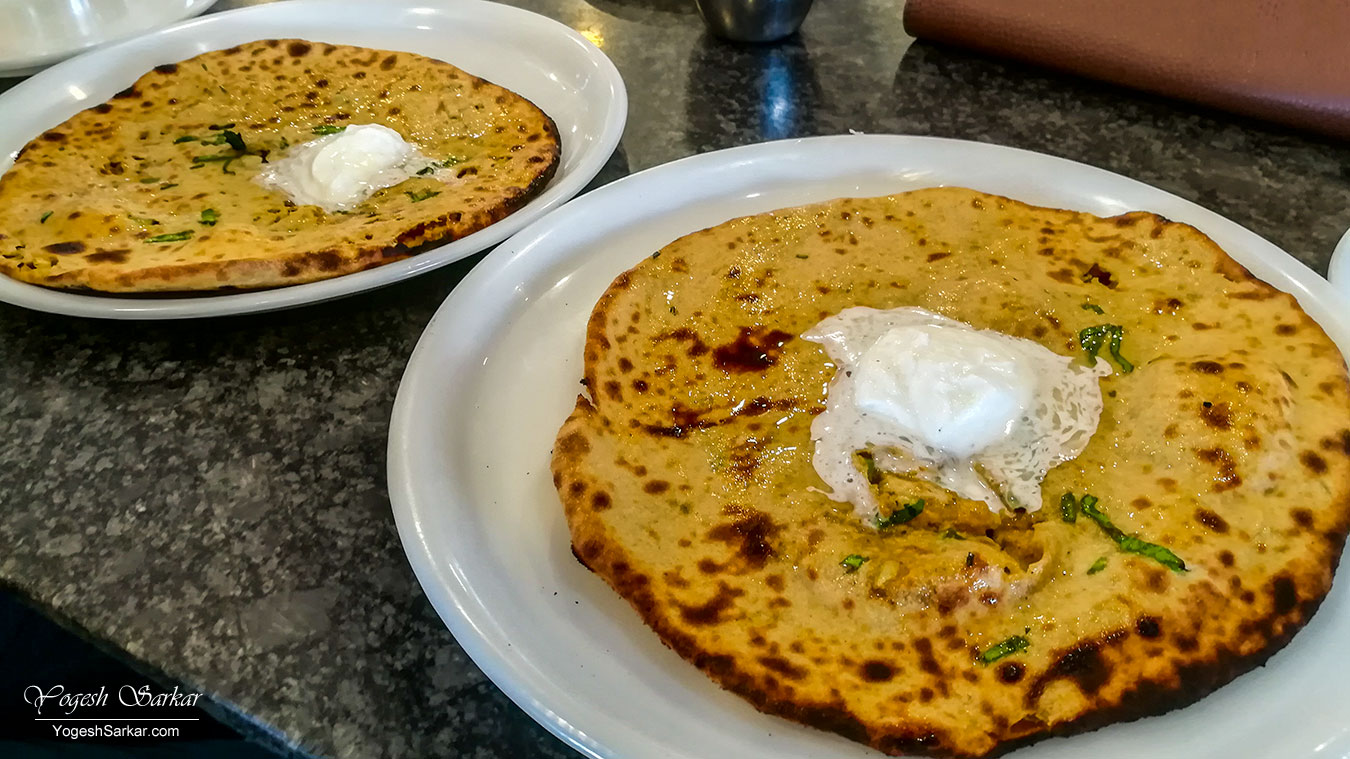 Both Gobhi and Aloo parathas were just about alright, nothing great. Although tea and grilled cheese sandwich were quite good.

45 minutes later with stomachs full and route confusion removed, we got ready to begin our journey once again.

However, before that, a photo of the lady and her chariot had to be taken, for they were the protagonists of this journey, I merely a documentarian. 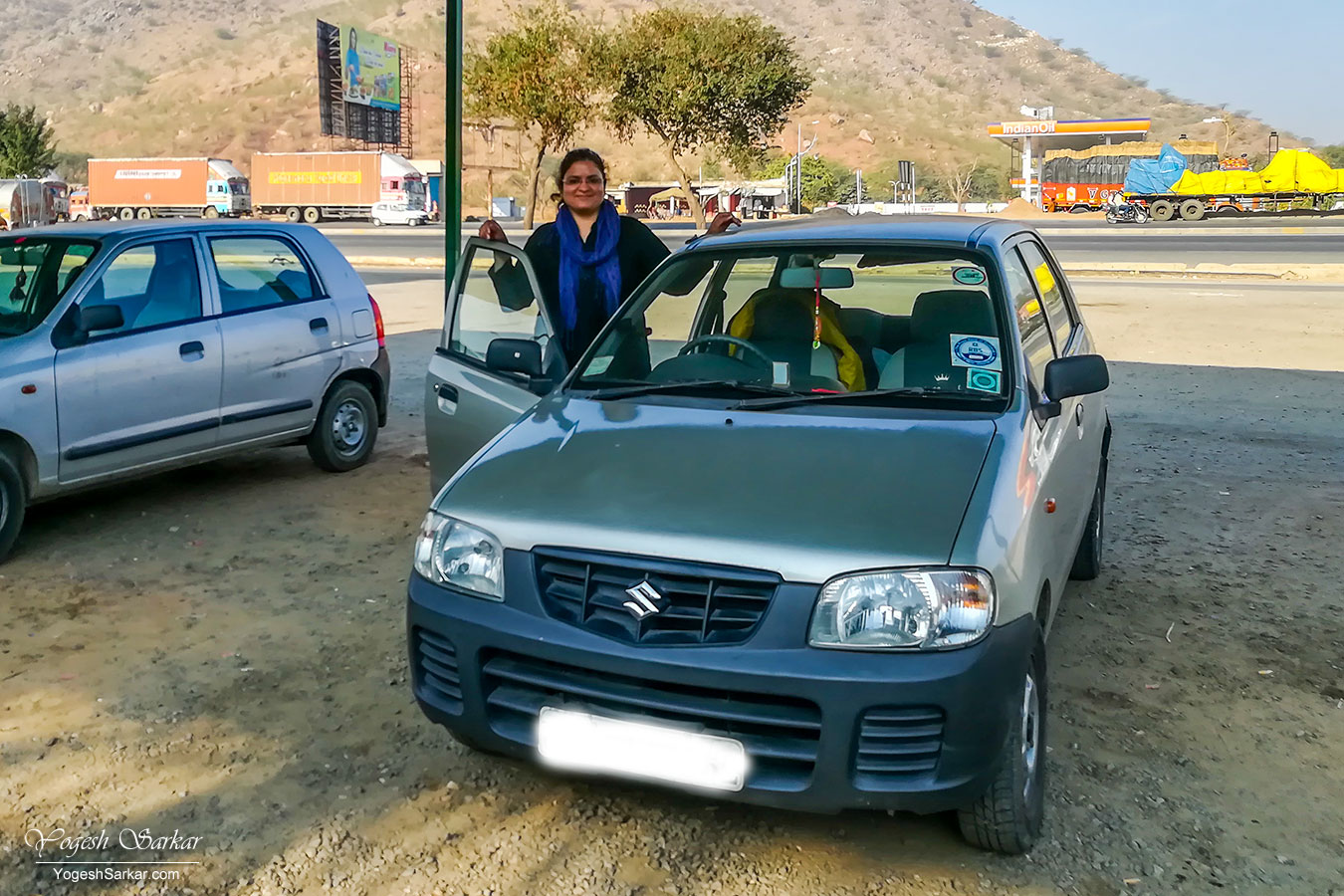 Soon enough, we reached Chandwaji and took the Jaipur bypass. And a few kilometers in, we took the diversion to Chomu.

It was a beautiful highway that we were cruising on now, and in comparison to Delhi – Jaipur Highway, traffic was quite less as well. Making for a beautiful and scenic drive. 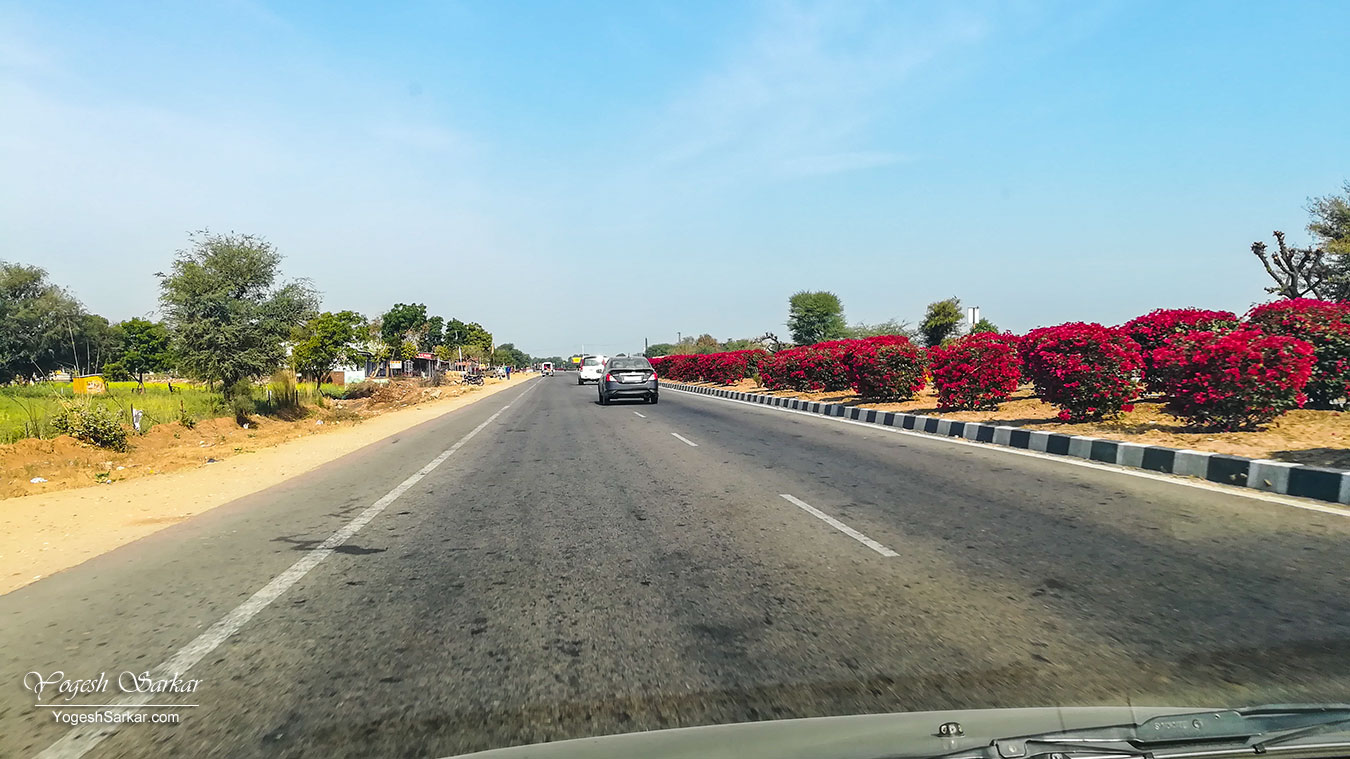 After we crossed Ratangarh, the landscape changed drastically. 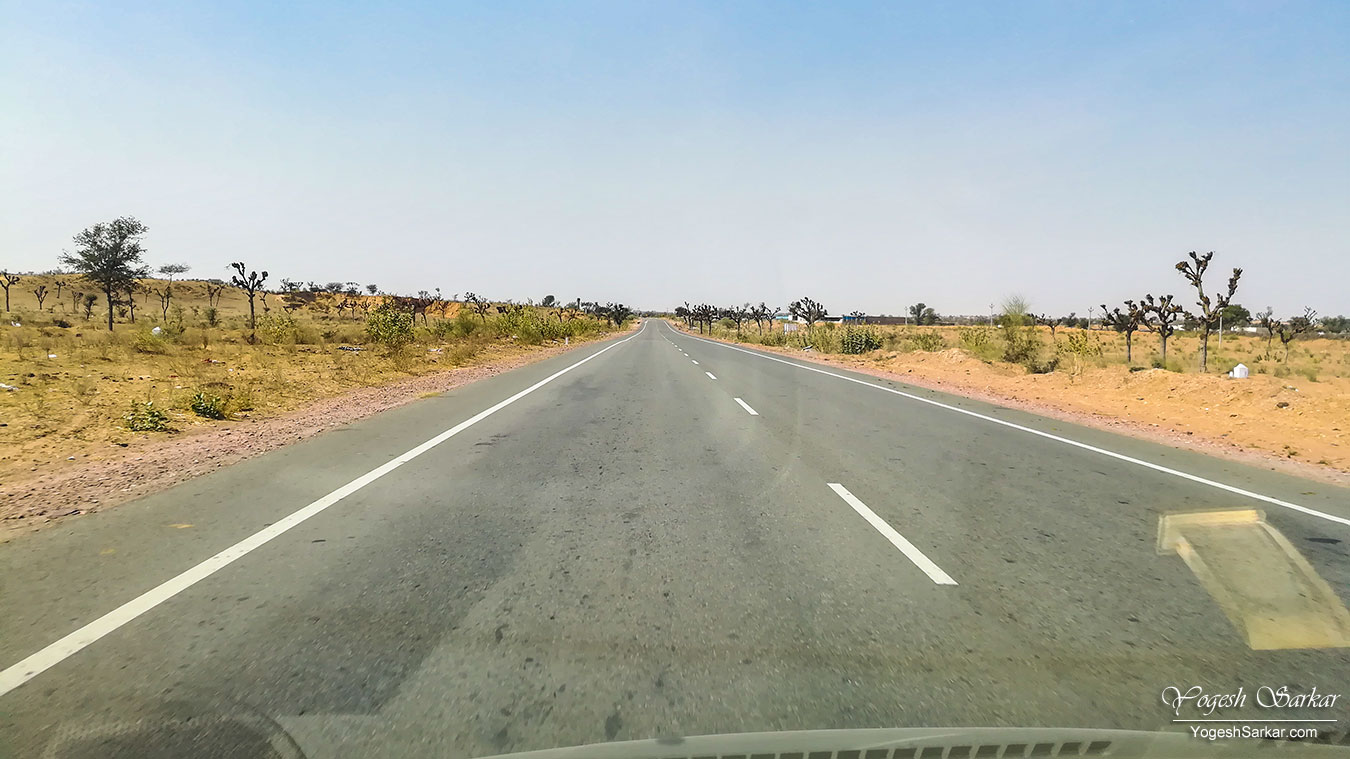 Though the real drastic change came after Fatehpur, when we began to see sand dunes all around. 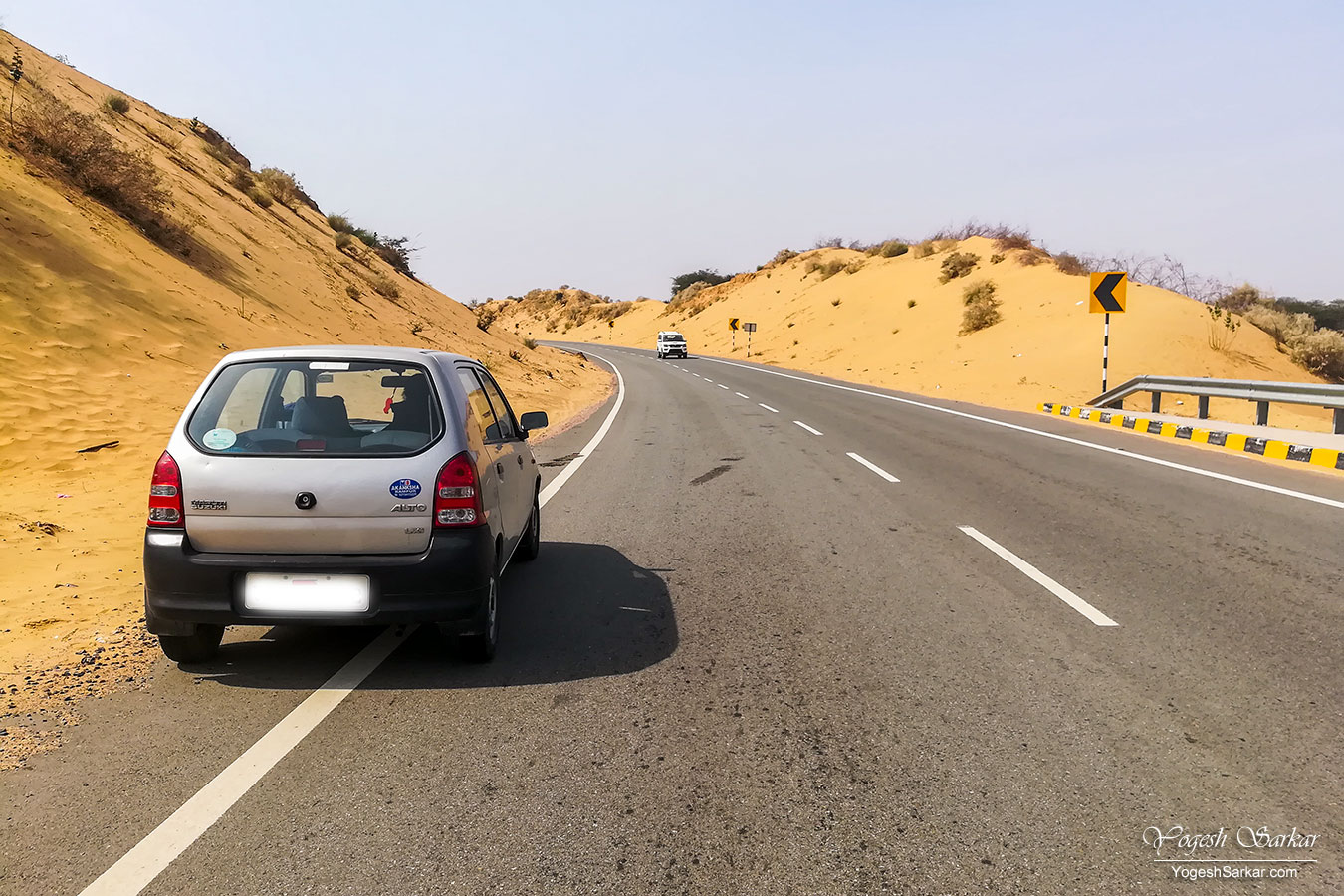 Even though the road was single lane and without a divider, it was smooth and fairly fast. Apart from a couple of quick photography breaks, we hadn’t stopped since we left the Highway King.

I had always known Mansi could do this road trip with ease, however, both she and I were surprised by her ability to just keep driving without needing a break. Heck, I began feeling tired while she was clearly enjoying the drive!

Thanks to her fast and continuous driving, we managed to reach Bikaner by 2:15 pm, in just 9 hours from my home (a distance of 535 km)! 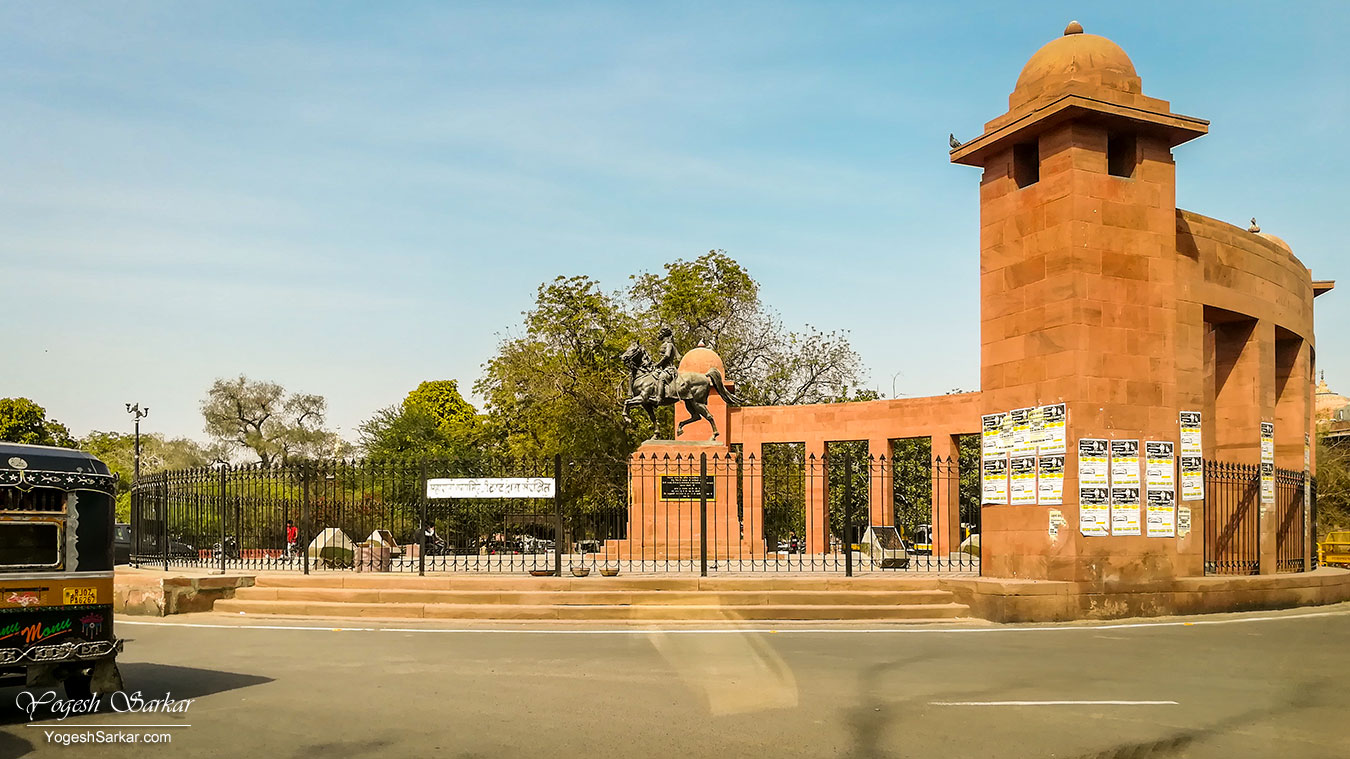 However, as it is customary for Google Maps, it took us to the heart of the city, and then onto a narrow lane!

Since our car was already in reserve and both of us were exhausted, we decided against searching for hotels and headed straight for the RTDC Hotel in Bikaner, Dhola Maru (you can read its review here.)

Since we hadn’t eaten since morning, we decided to eat at RTDC Hotel, matar paneer and rotis. A simple and okish affair and I guess we would have been better off eating elsewhere. 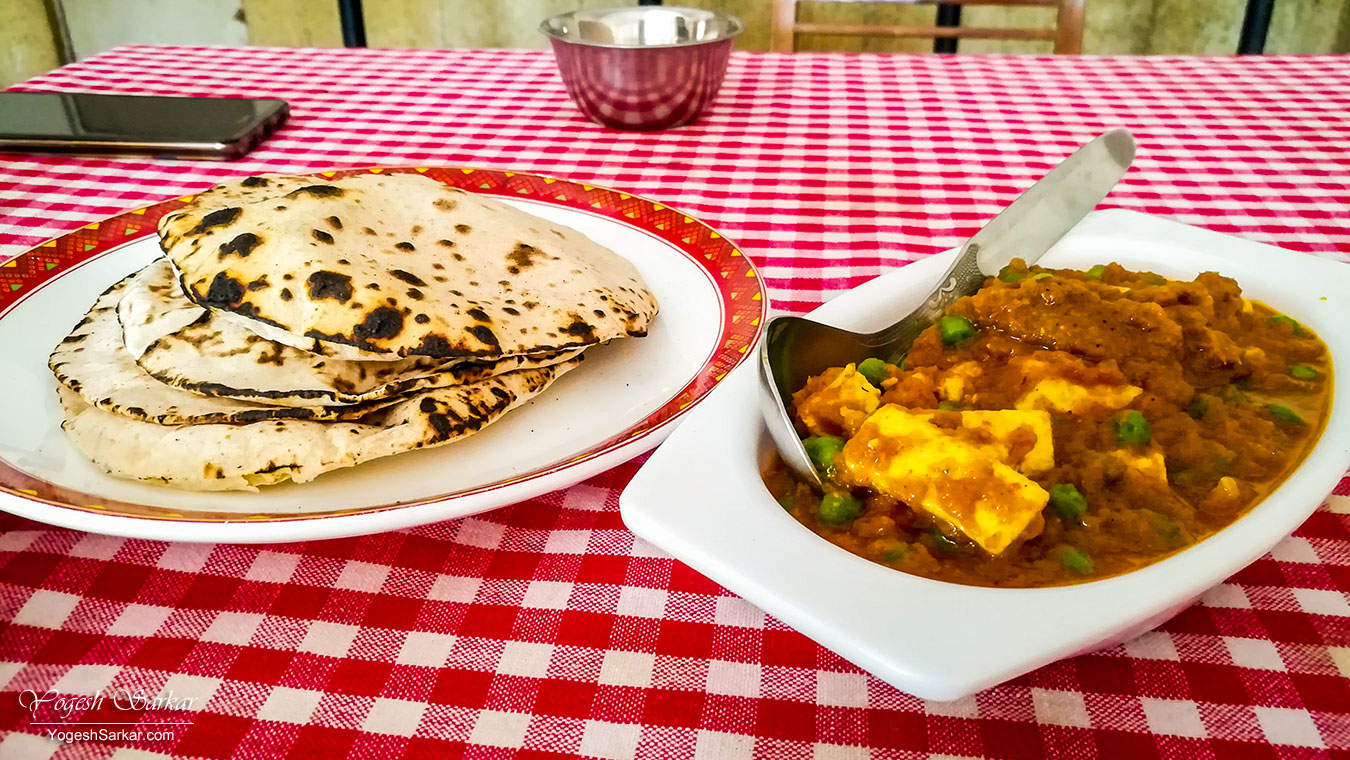 However, Mansi was tired and wanted to rest. So we got a couple of rooms and decided to rest for a couple of hours, before heading to Karni Mata Temple, which was 30 km from here.

My room at Hotel Dhola Maru. 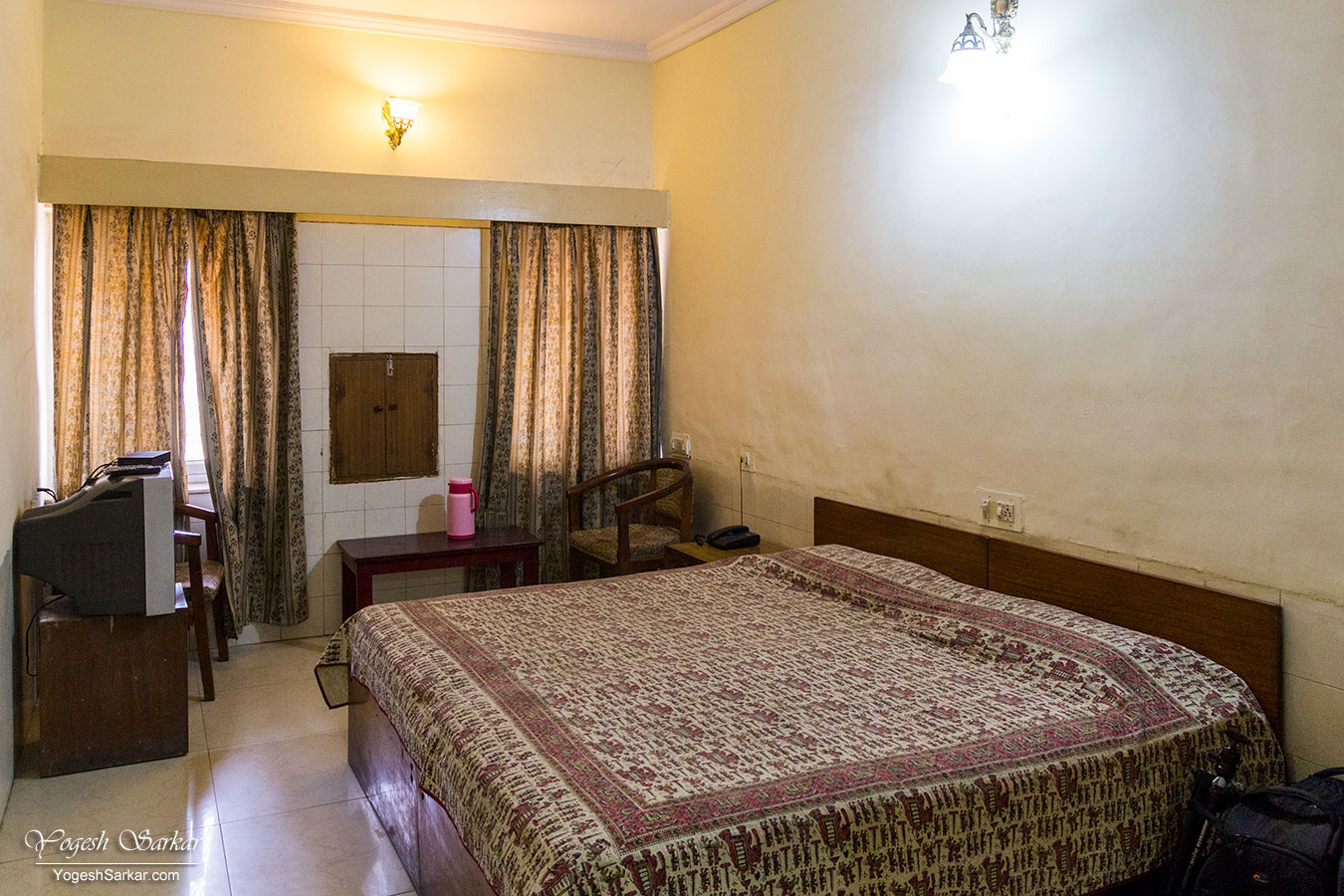 This is something I was also looking forward to!
Bring us more of it pls!

Thank you Sachin, I will post the next part tomorrow .

Day 1, Bikaner and around

After resting for a couple of hours we got ready to go out. The plan was to visit the Karni Mata Temple, around 30 km from Bikaner and then come back and visit Jain Temples, before dinner.

However, first, we needed to get some petrol, since the fuel tank was nearly empty. The first place Google Aunty lead us to was hardly a couple of hundred meters from our hotel. However, there were no petrol pumps there.

We finally set the navigation to petrol pump at Ambedkar Square, and thankfully, this time around, there were actual petrol pumps there!

Fuel rates here were more than what they were in Delhi and Jaipur, Rs. 77.48 to be precise and the little Alto drank up almost 32.3 liters of it i.e. there was barely 2 and a half liter fuel left in the tank.

After the fuel stop, it was time to head to Karni Mata Temple and en route, the sunset occurred. 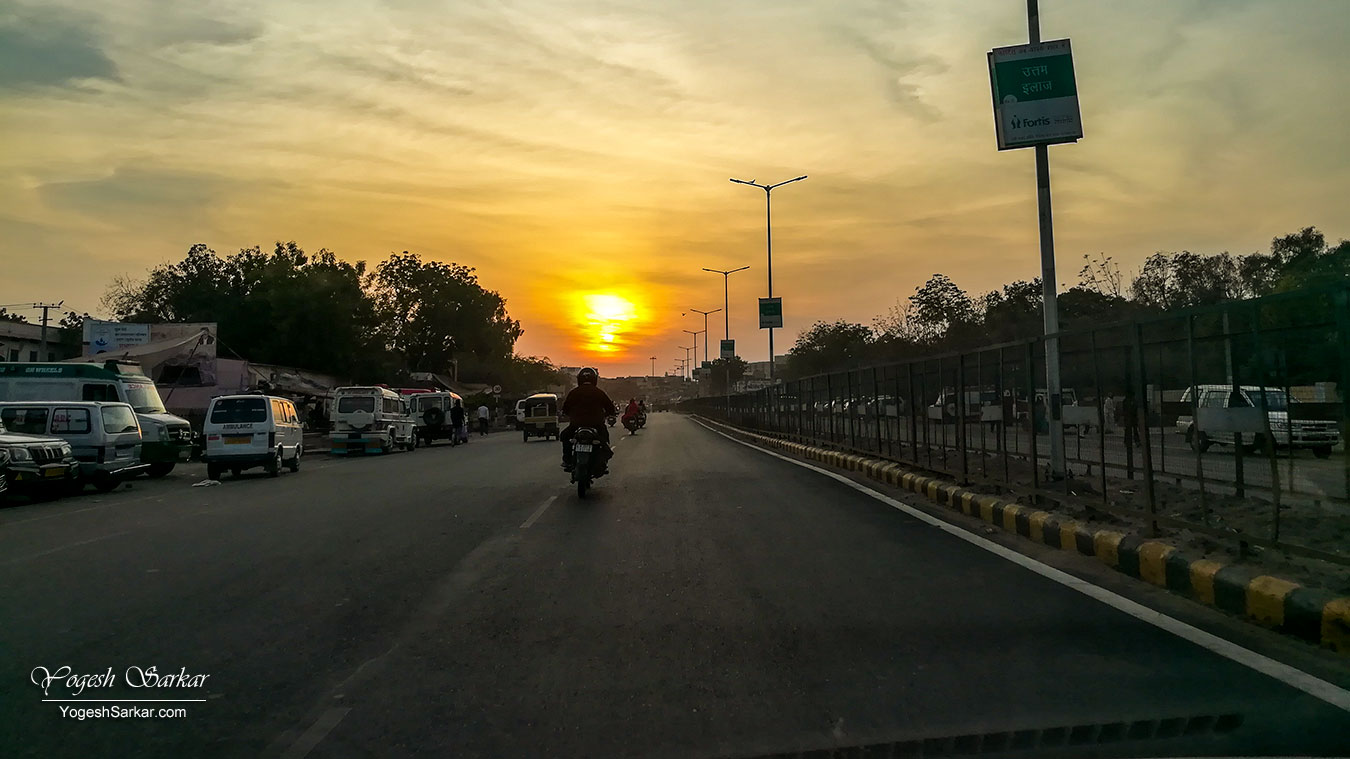 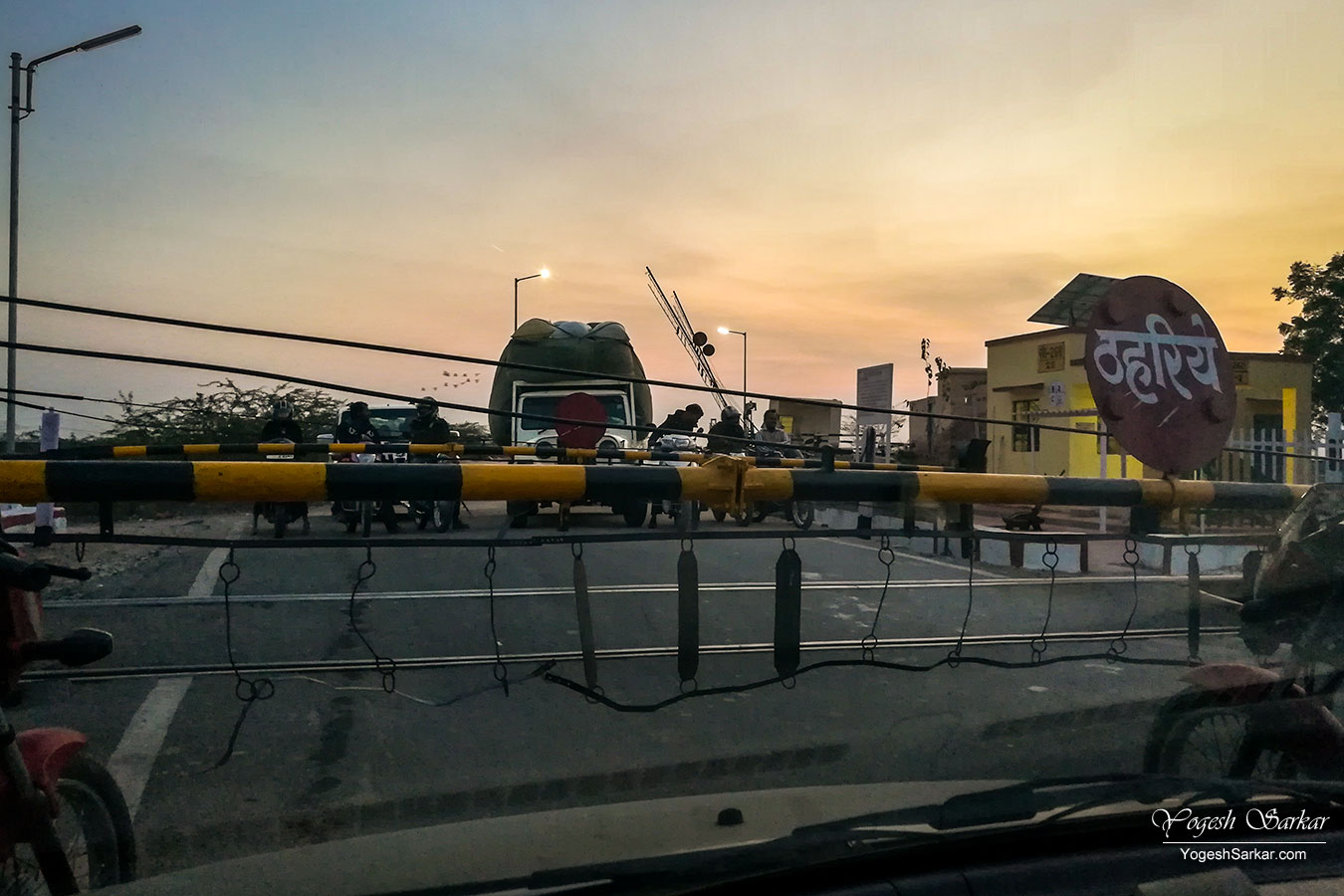 While waiting at the crossing, a couple of guys on a motorcycle scratched the Alto’s bumper in a bid to get ahead and cross the closed railway crossing. We assumed they were just late for their weekly mental checkup and hence we didn’t mind much and continued with the wait.

Finally, the train came and went. Then the gates were opened and we took the left road. Which lead us to directly under the highway we were supposed to take as per Google Aunty. Only there was no way to actually join the highway!

So we came back to the crossing and this time crossed the second set of tracks and continued with the alternate route which eventually lead us to a broken and desolate road. By this time our faith in Google Aunty had diminished quite a bit and that route didn’t look safe to be taken at that time.

So we turned back and headed back to Bikaner.

I was in the mood to just find a place to have dinner and rest. Mansi, on the other hand, wanted to see the Jain Temples.

So once again, we fired up Google Aunty and she took us to the heart of Bikaner, the old Bikaner.

By now, we were beginning to see a pattern. No one moved out of the way, no matter how much you honked (be it vehicles, pedestrians or animals) and no one braked either to allow you to pass.

To top it all, the road we were now driving on was just about wide enough for the alto to pass through. Yet, auto drivers would come up in front, expecting us to shrink in size in order to let them pass. And even though they could just back off 50 ft or at times even less to give us and them an opportunity to pass, they didn’t. All the while, motorcycles, cycles and people were just going from the left and right. Not even giving us an opportunity to maneuver the car!

At one point we ended up in a situation where the hood of the alto was directly under the neck of a bull! Motorcycles and people were continuously crossing between the idiotic autowallah and our car. At that moment we actually had to decide, who did we want to hit, rather than whom to save!

Thankfully though, after a lot of honking and arguing, the autowallah finally gave us enough space to turn the car from under the neck of the bull, who thankfully hadn’t yet charged or gotten further in our way!

After passing that mess, we came across the Jain Temples. They looked fine from the outside, but certainly not worth the mess that we had just gone through. And we didn't want to park the car on the narrow road. So we didn't go inside.

Now all we wanted to do at that point was to get on to the main road. Nothing else mattered and thanks to a kind soul who guided us, we were able to do just that!

Then we tried to drive to Bhikharam Chandmal Bhujiawala, a place Bhuwan sir had recommended to us for Bhujia and Gond Pak. After driving through the main market, we found it to be located in a narrow alley. So instead of getting stuck again, we rightfully decided to drive to the Bikaner Junction and park the car there and do rest of the exploration on foot.

This helped us reduce some of the frustration and we got to see the beautiful Bikaner Junction. 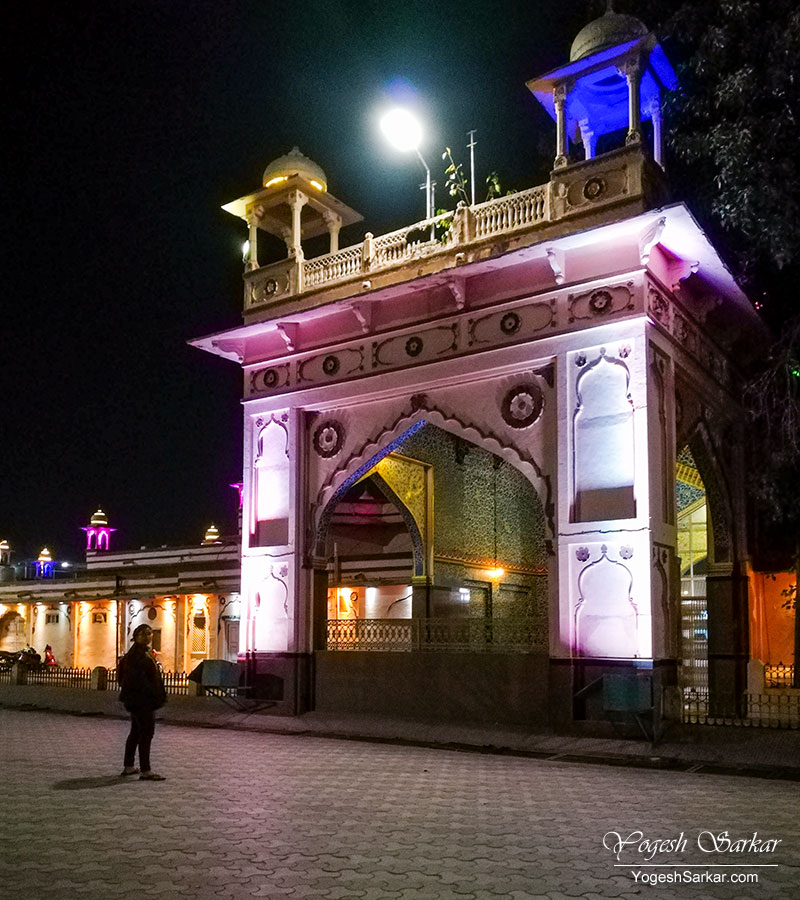 After walking for a bit, we managed to reach Bhikharam Chandmal Bhujiawala, a shop started by the grandsons of the man who invented bhujia 125 years ago, Tansukhdas.

Here we tried out the paneer pakoda and the delicious Gond Pak. We also bought a couple of packets of Bhujia, which turned out to be great. You can read my full review of it here, Bhikharam Chandmal Bhujiawala, Bikaner, Review. 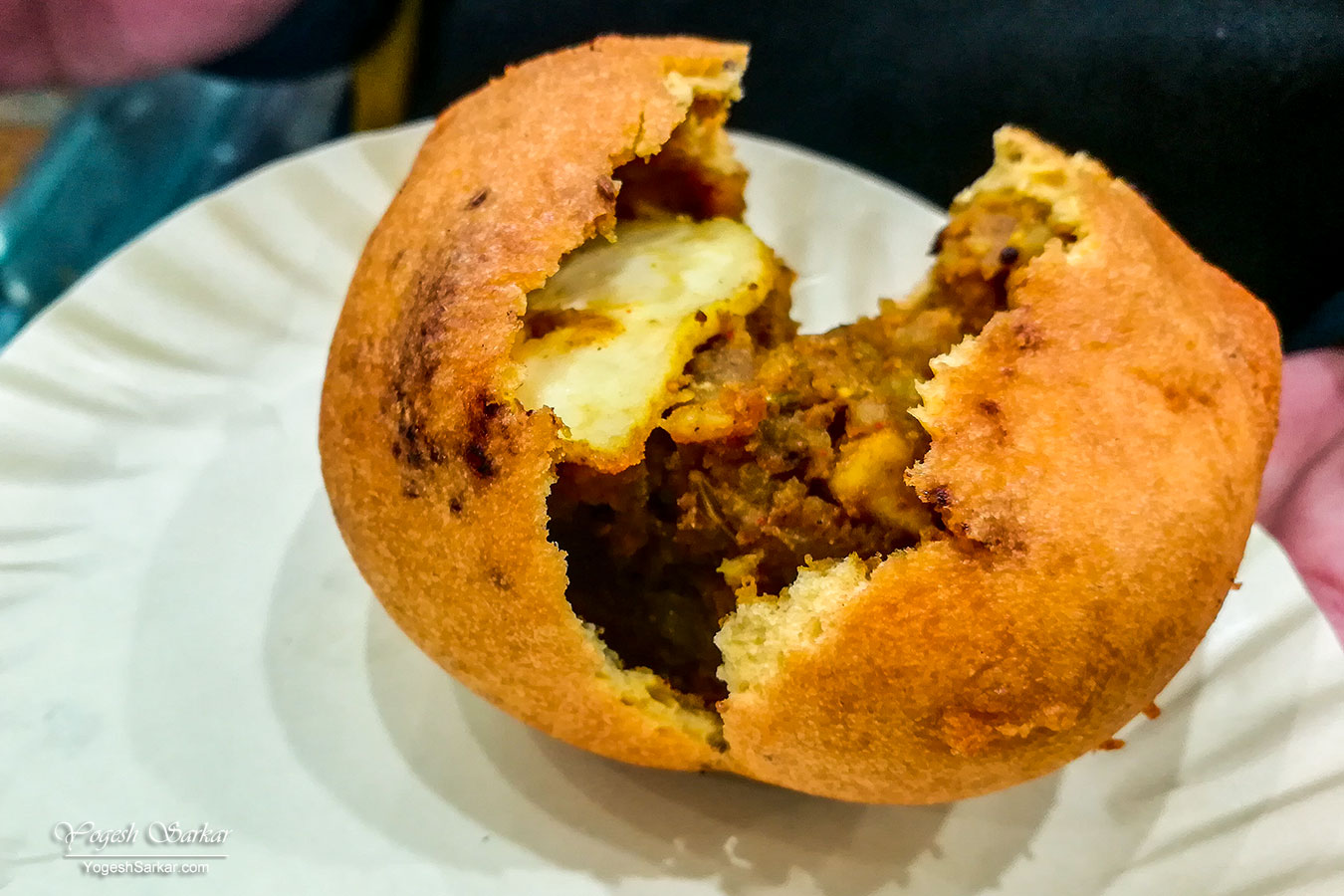 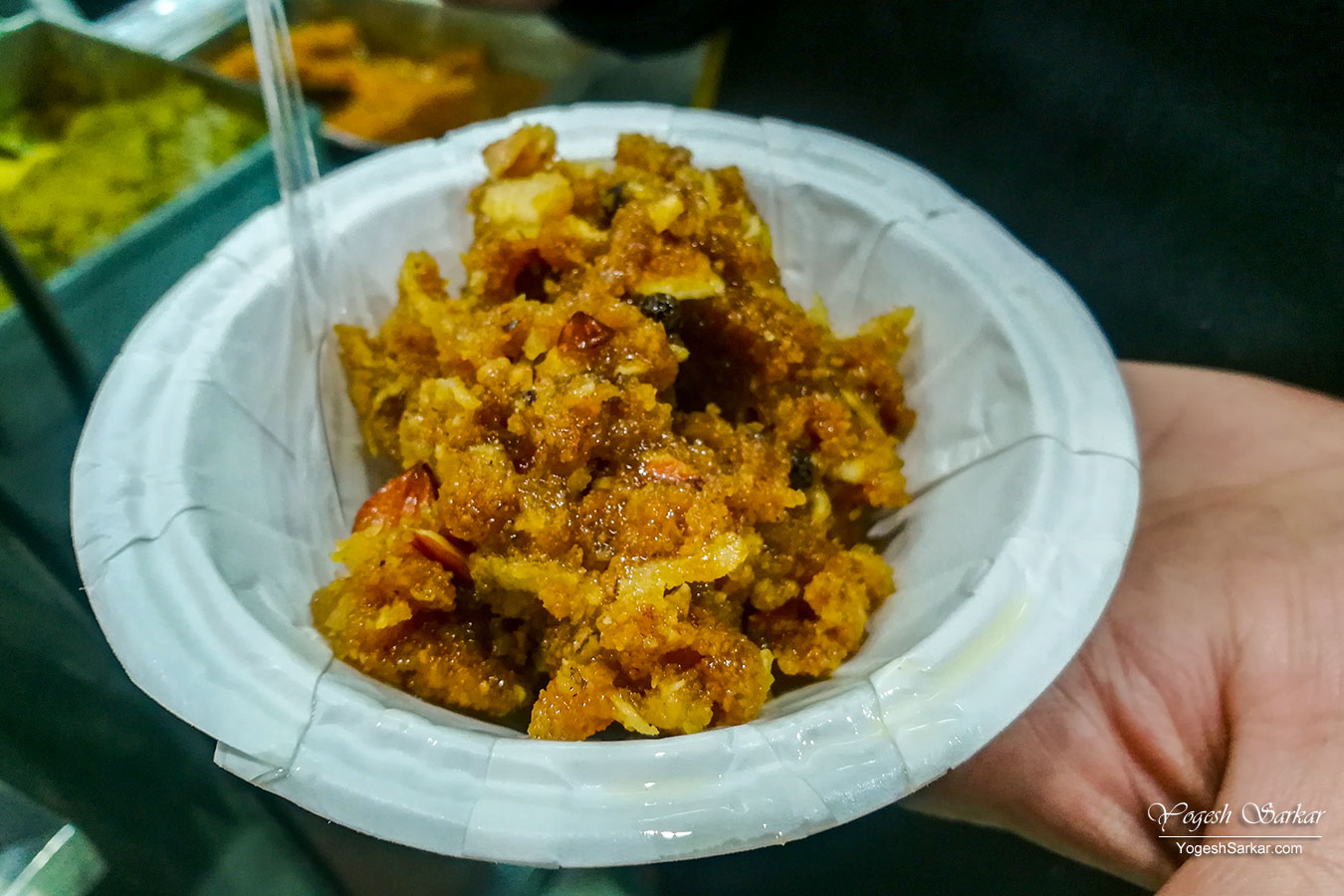 Even though we had been successful in locating Bhikharam Chandmal, we couldn’t locate Suraj Restaurant, Bhuwan sir had recommended and thus decided to instead eat at the largest restaurant we had come across, Amberwalla. 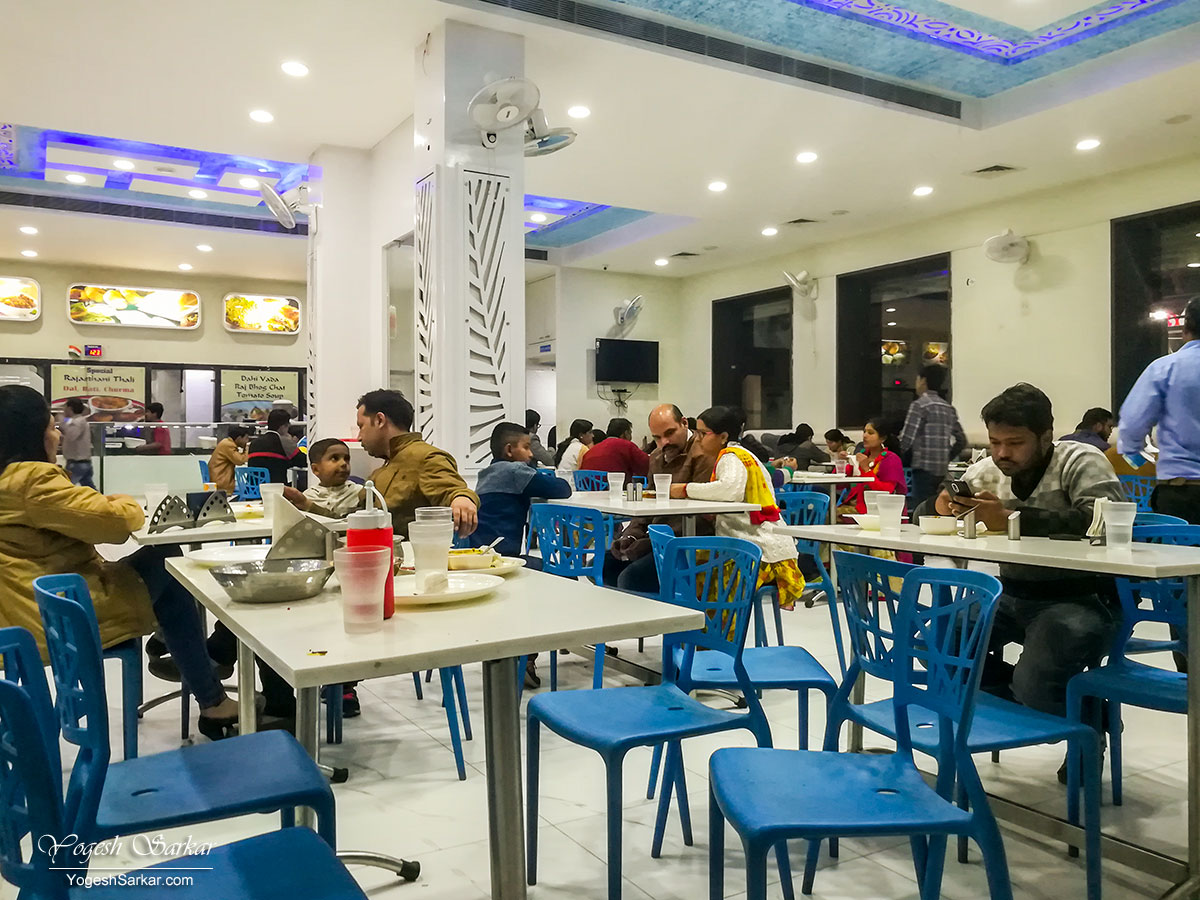 It was a big mistake since, from service to food, everything was bad. 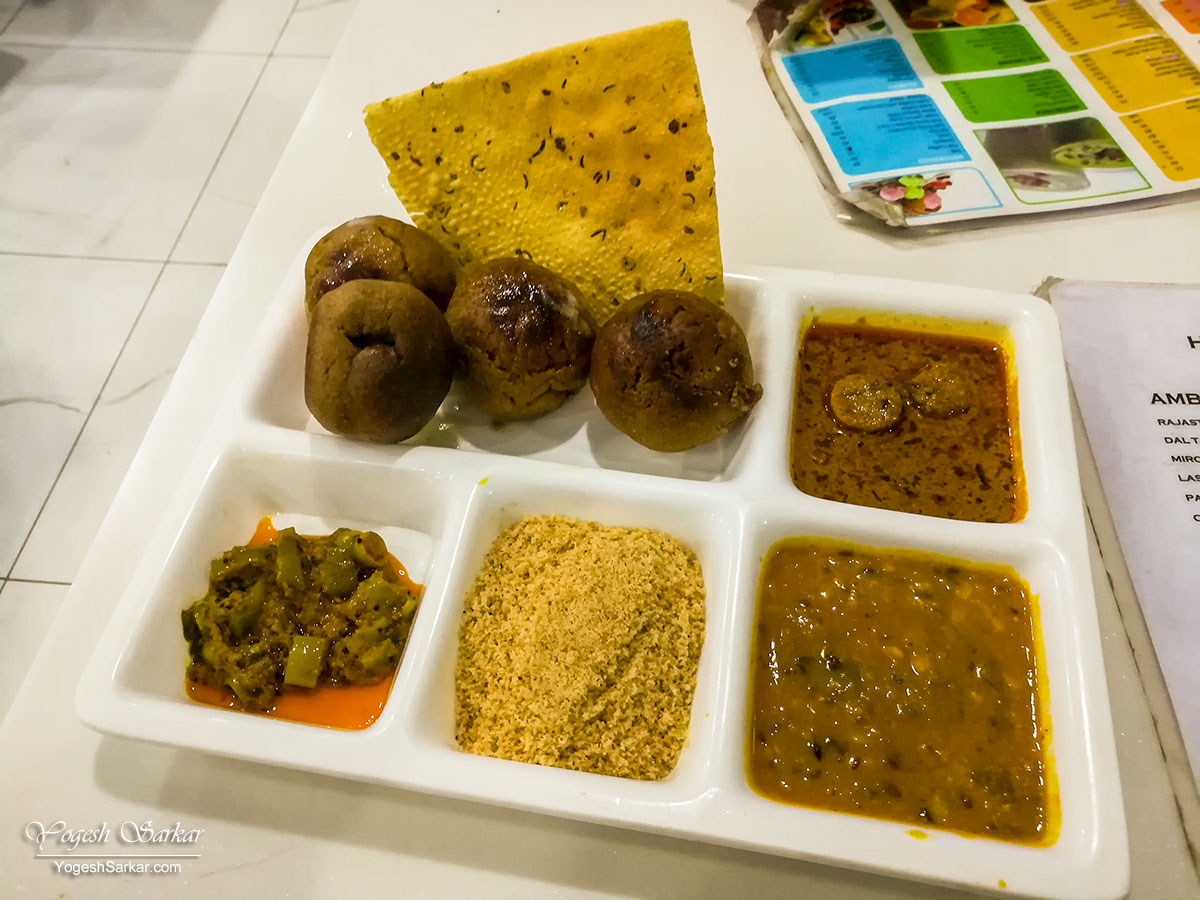 And that was another low point for the day and made us feel even worse (you can read the review here, Hotel Amberwalla, Bikaner, Restaurant Review). At this moment we just wanted to head back to the hotel and get some sleep.

Tomorrow was another day, and we hoped it would be better than today.

Tolls paid during the day:

Even we got lost on our way to Karni Mata temple and that too without Google Aunty! But, we did get there just as darkness fell.

For the Jain temples and the havelis, I refused to take the i-toonty into the old city. Parked on the road, took an auto and got dropped back! My knees were almost scraping past the shops on the way to the Jain temple.