I feel this trip was more for doing touristy things

Thank you Nadeem. In a way, Rajasthan only has touristy things to offer. It is the forts and the palaces, which make it such an enticing place to explore.


rajat.narang said:
Superb Update! Will be very helpful for anyone planning a trip to these parts...
Click to expand...

After lunch, we took another auto back to RTDC Moomal, which wasn’t all that far from Maharaja Restaurant. It was almost 3:30 pm, Sam Sand Dunes were almost 40 km away and we still had to get fuel.

After filling up the most expensive fuel of the trip (around Rs. 4 more than Delhi.) We headed out of Jaisalmer and towards Kanoi.

Even though the road was a single lane one, it was a sight to drive and see. In fact, it was quite a picturesque route to be traveling on. Unfortunately, since we were hard pressed for time, the only photograph we managed to take of it was while driving. 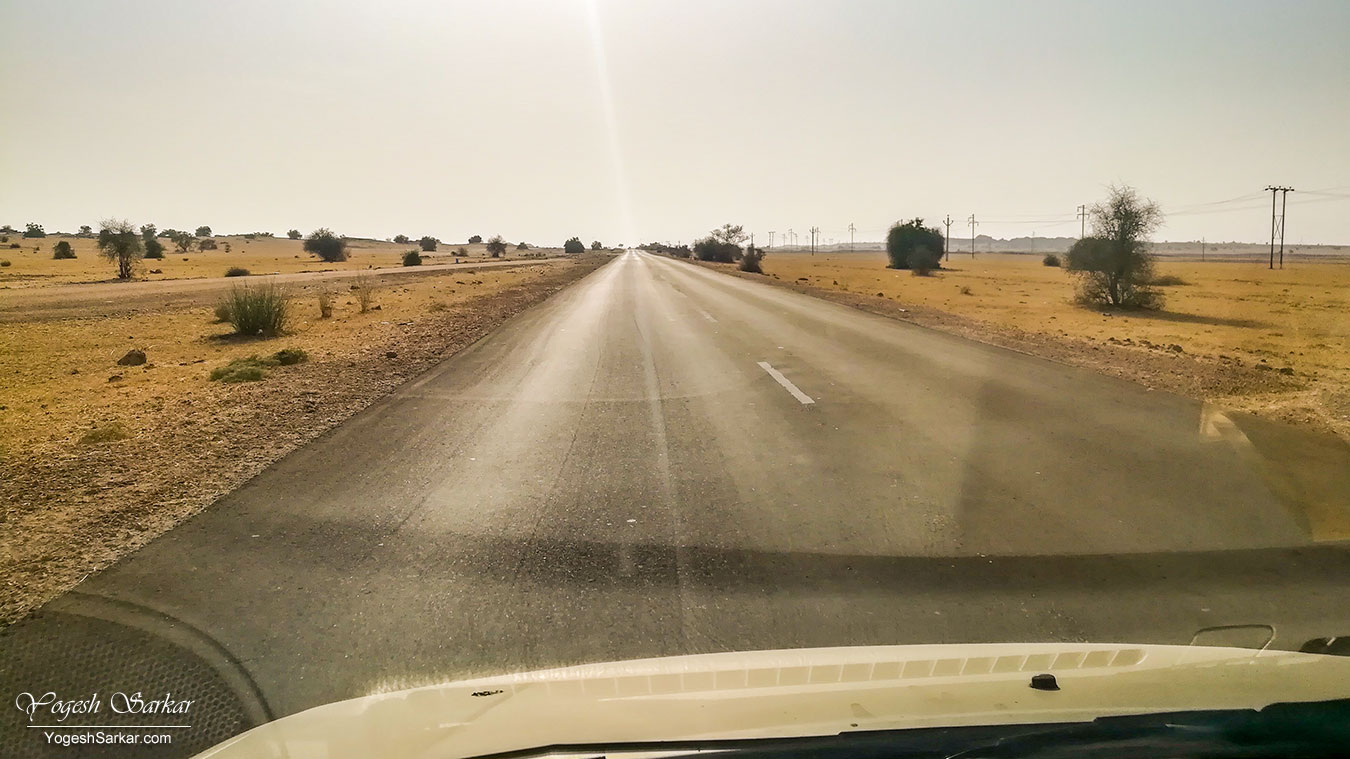 An hour later, we were at RTDC Samdhani Resort. They had rooms as well as camps. However, for Rs. 4,000 a night, they didn’t look all that great. Though the cost did include dinner and breakfast, along with safari in evening and cultural event in the night at another resort nearby.

Disappointed, I decided to contact Kasam Khan, who happens to be a friend on Facebook and runs Kasam Desert Safari Camp. After a brief conversation, we headed over to his camp and on finding it to be a better deal than RTDC (we eventually paid Rs. 3,400 for tent, dinner, breakfast, jeep safari in evening, small camel safari in evening, cultural program and morning safari.)

The tents were quite comfortable and cozy, you can read the complete review of it here, Kasam Desert Safari Camp, Sam, Review. 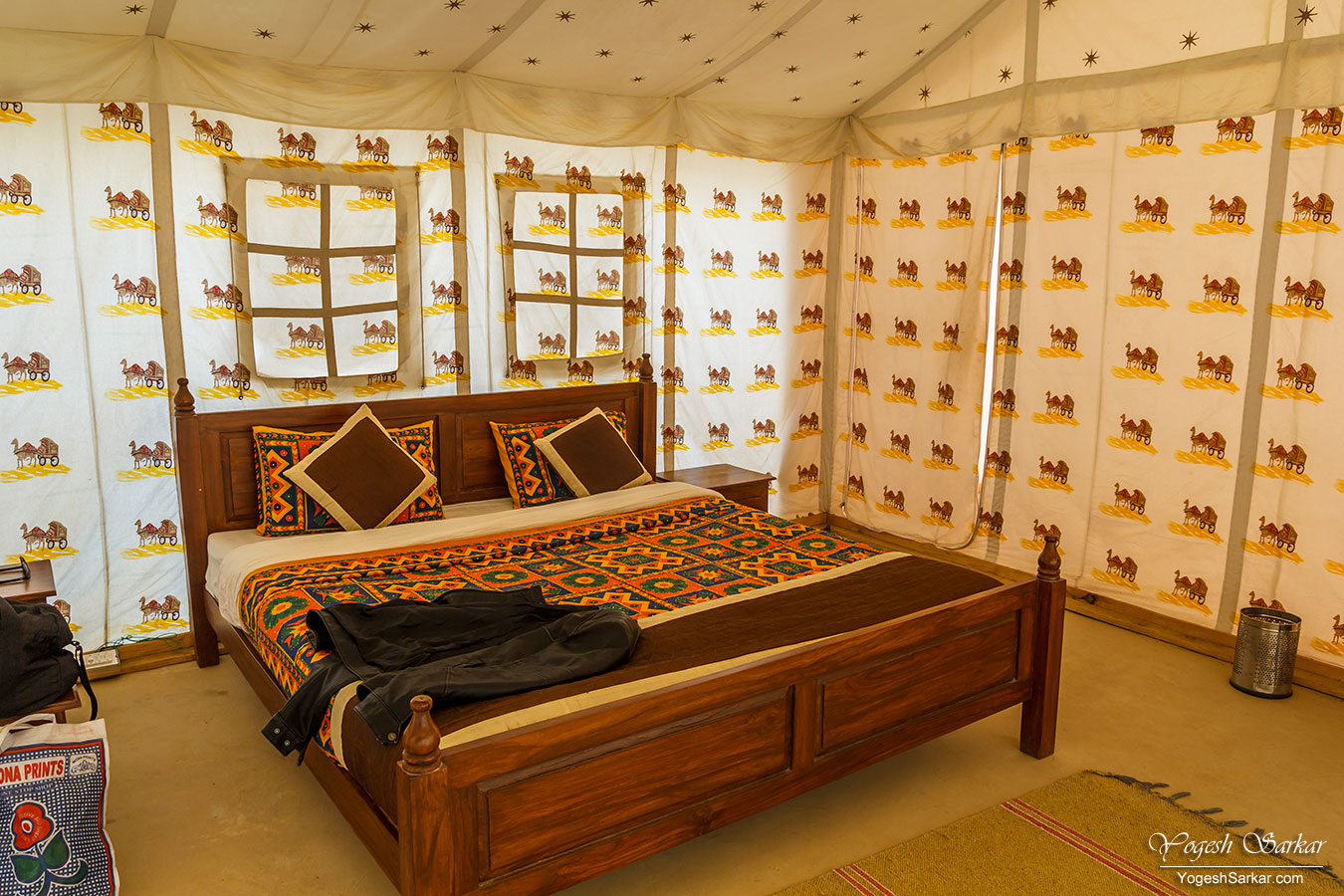 Even though Jeep Safari through Sam Sand Dunes sounds exciting and it is. However, it is also a fairly scary affair and you have to hold on tight to the back of the jeep while doing dune bashing, lest you fall off!

Now Kasam bhai is an excellent driver and we did a lot of dune bashing, before coming to a halt towards the end of the dunes.

While I started setting up my camera for photography, Mansi decided to go for a small camel ride.

The desert was teeming with activities and was a fairly lively place with tourists taking photographs, jeep safaris running all over the place, camel and their herders looking for customers, those in traditional costumes trying to get money from tourists for posing. In fact, one had to be a little careful here, lest a jeep doing dune bashing comes out of nowhere and knock you out!

I guess this was one reason I didn’t really enjoy it as much as I would have hoped to. Even though, I did get a few good photographs. 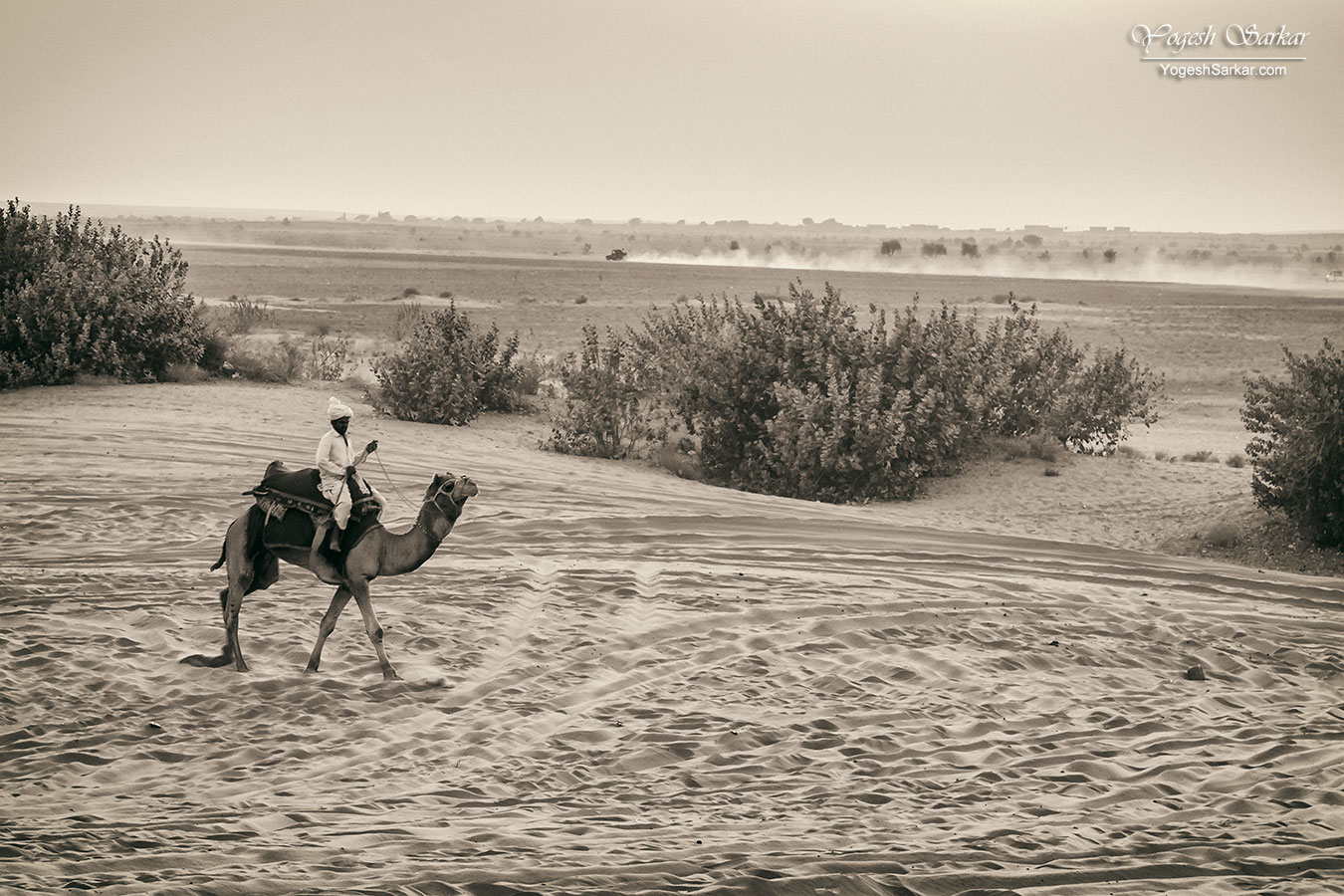 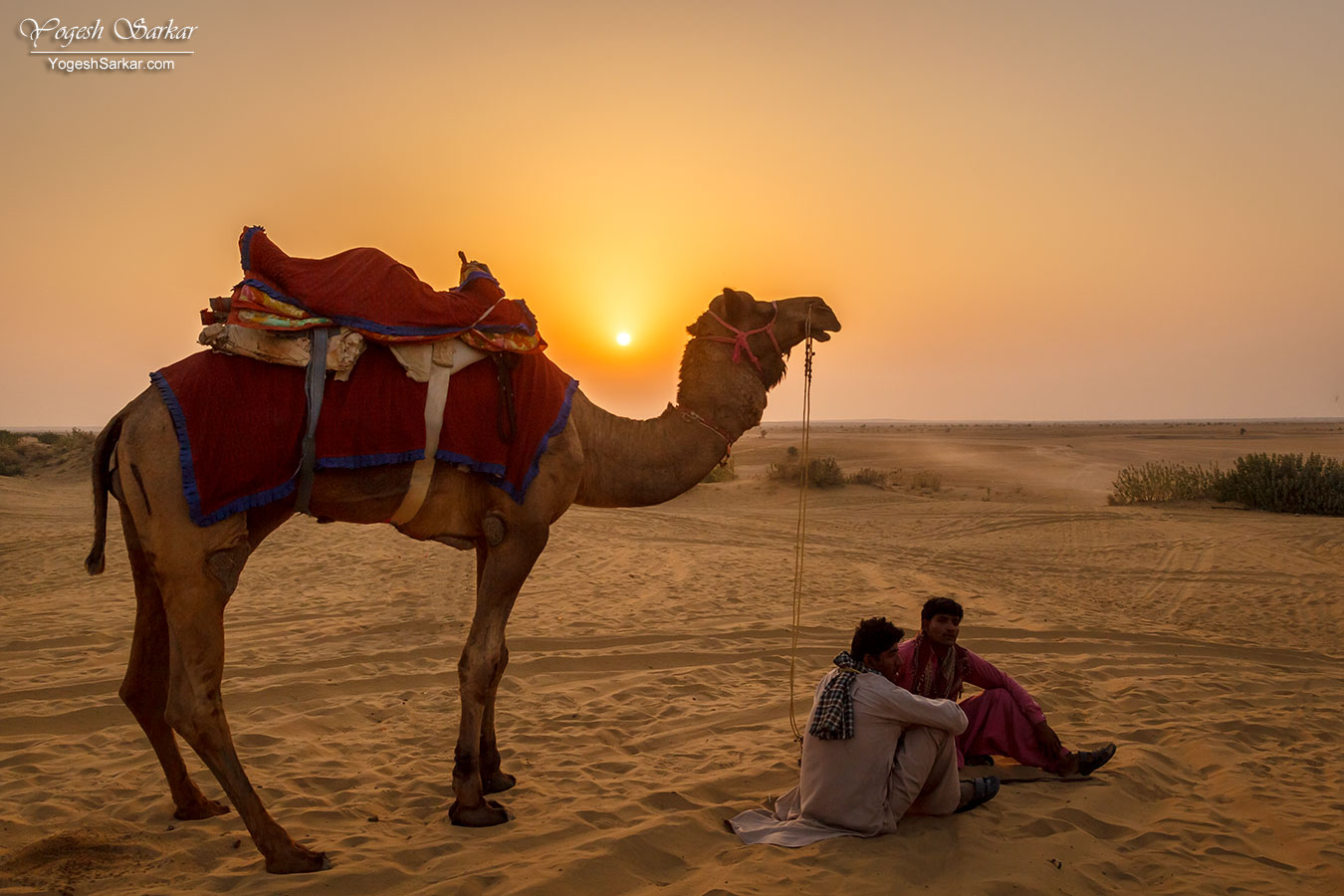 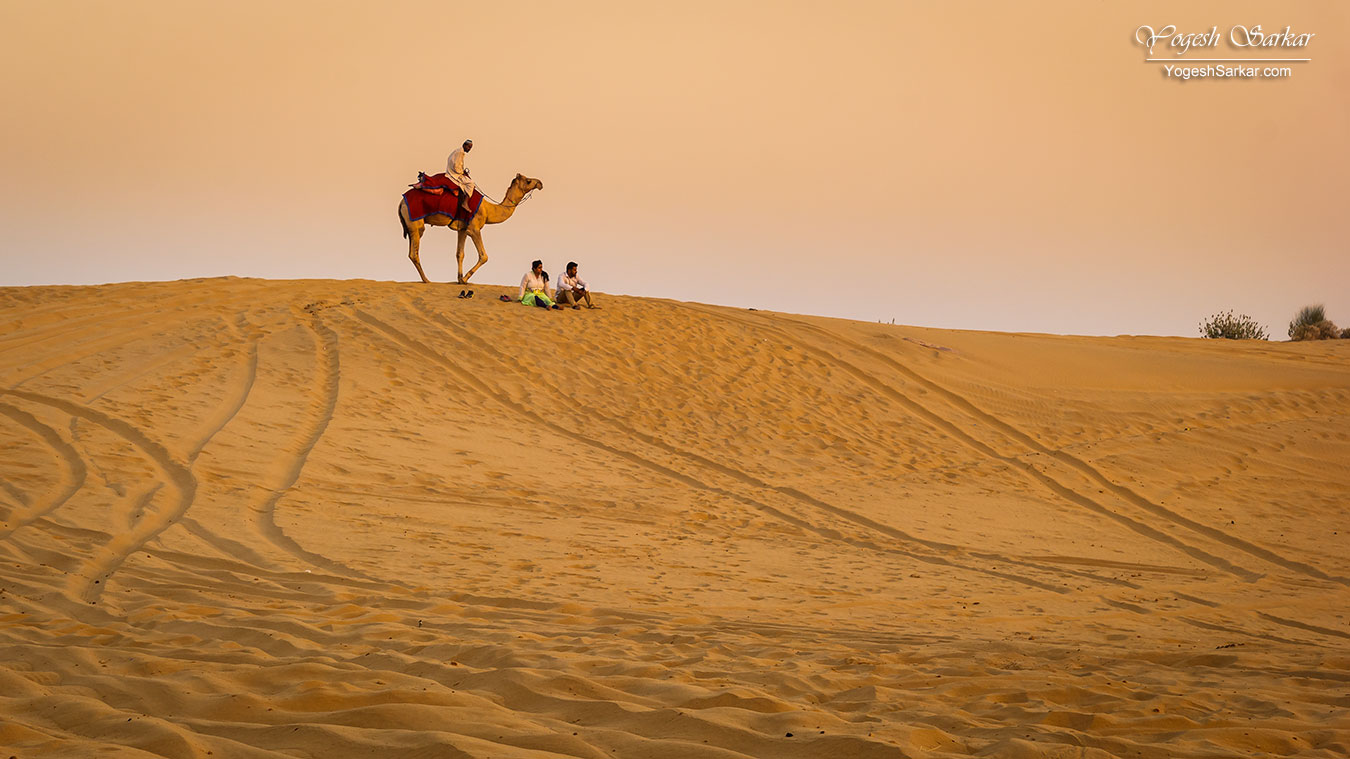 Mansi came back with a big smile plastered on her face from the camel ride. 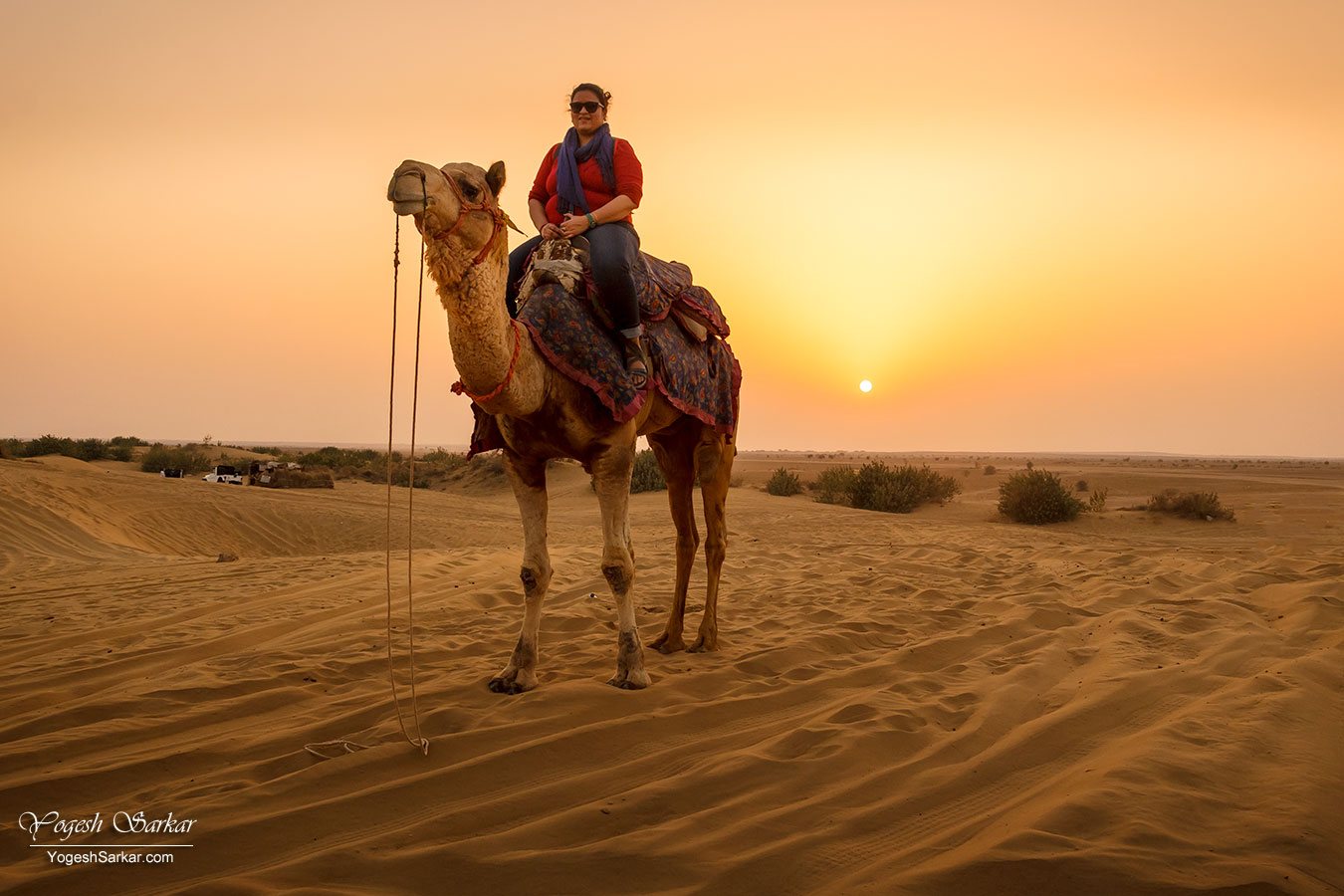 I have done a camel buggy ride once in Pushkar and I have seen the way camels are treated by their handlers. From that day onward, I have never been interested in camel safari or camel buggy ride.

In any case, it was good to see at least the camels here seemed well fed and in good shape.

With the sunset over, Kasam bhai took Mansi for a showboating ride in the jeep, while I took photographs and video. 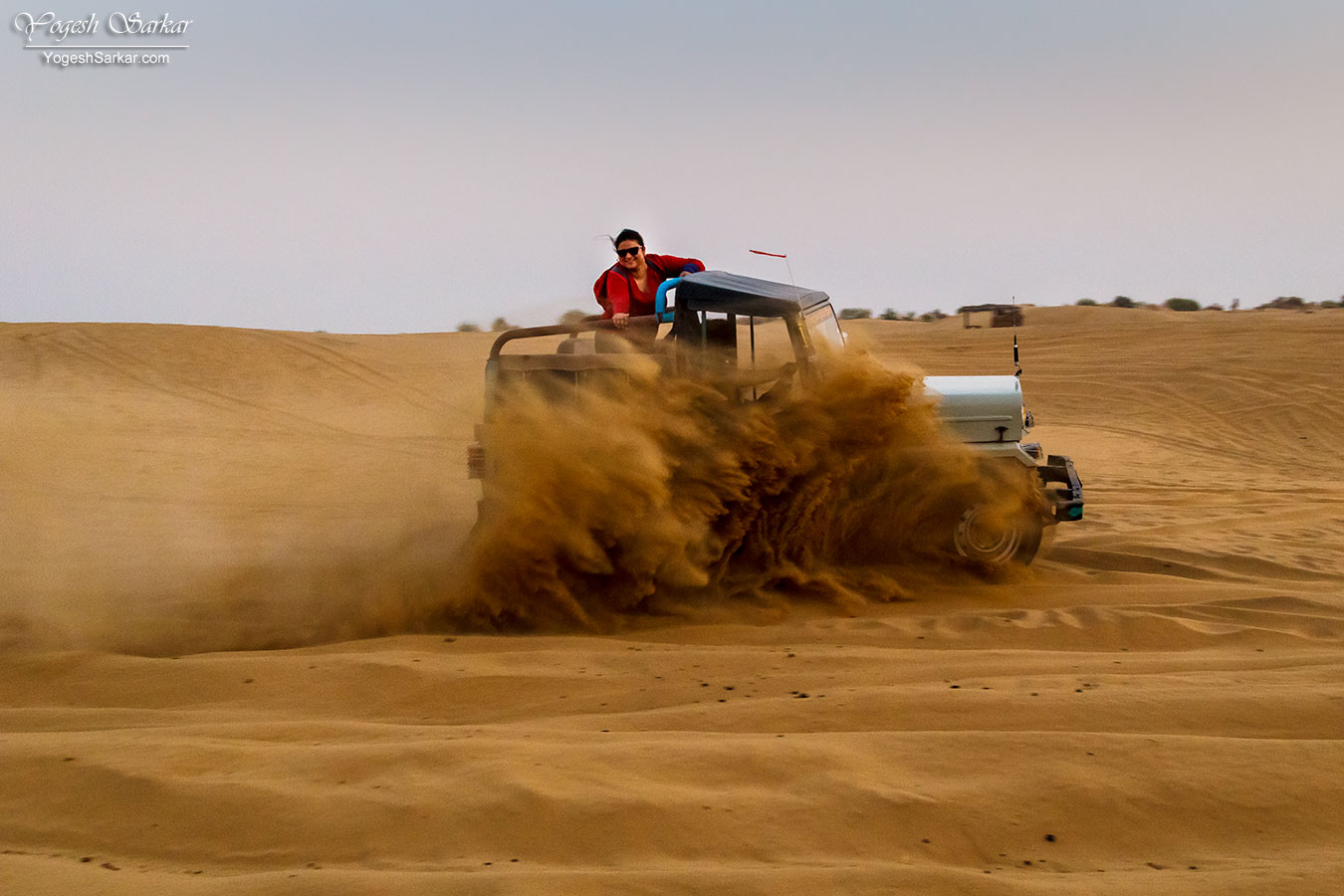 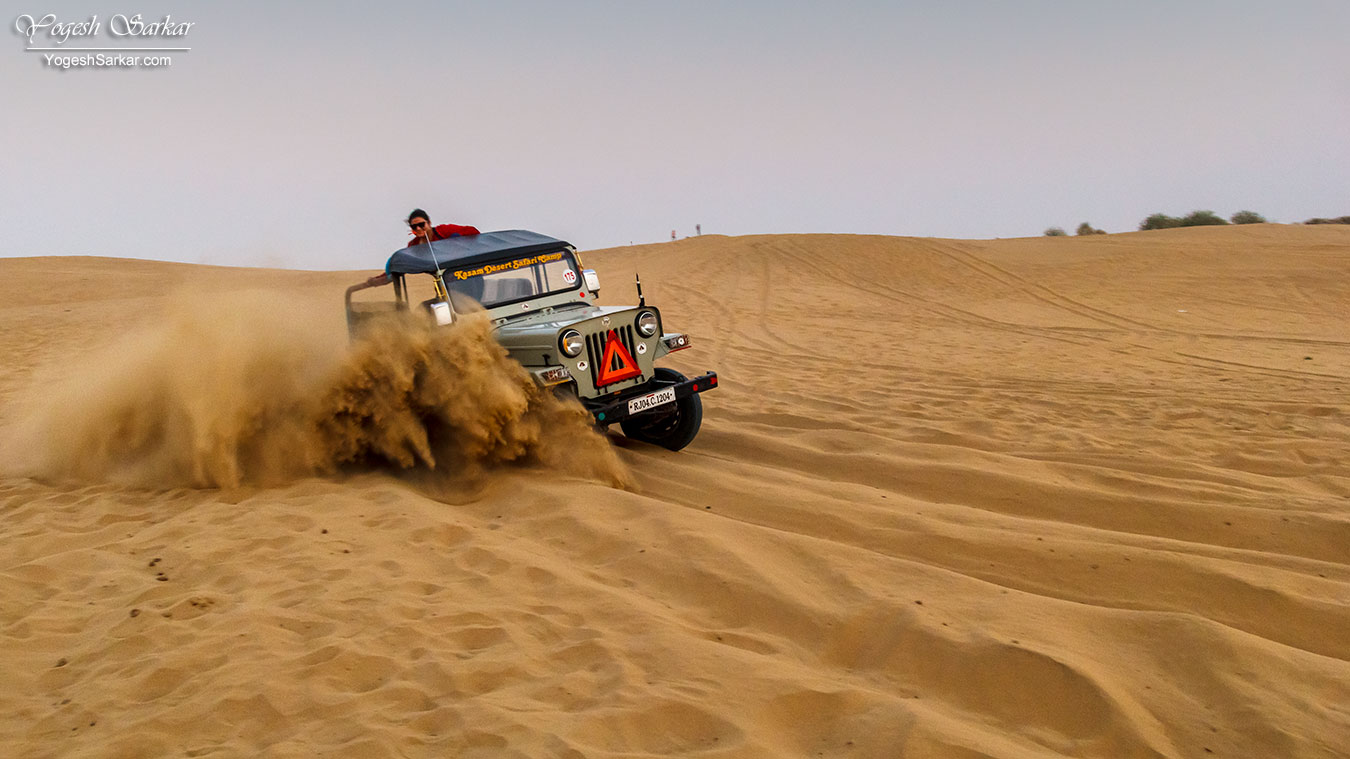 Kasam bhai and his dune basher. 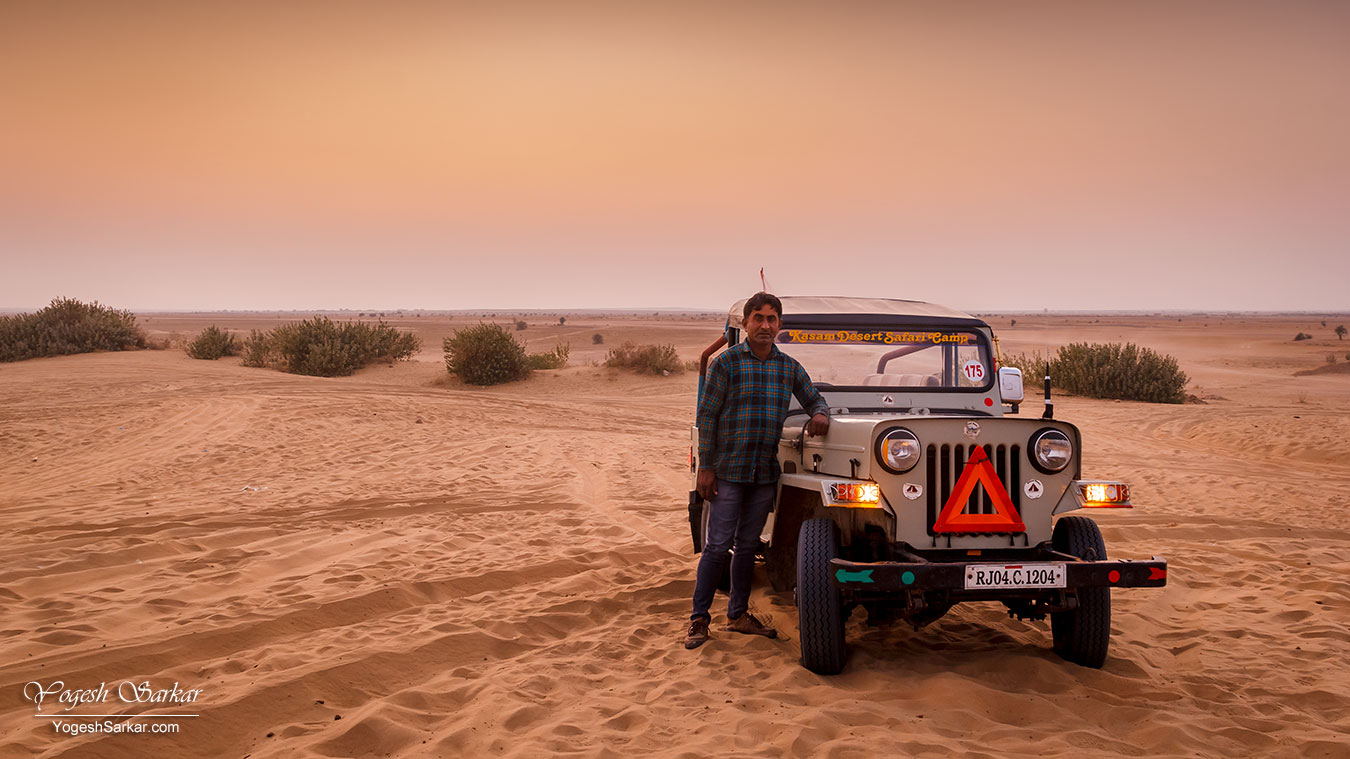 Desert safari over, we hopped back into the jeep and drove back to the camp, where we were welcomed by a lady in traditional clothes, welcoming us with a tika.

After a quick shower, it was time to enjoy the evening’s entertainment, which began with melodious Rajasthani folks songs and was amped up with the fire dance.


Sadly though, during the course of the dance, in which the performer is supposed to pick up a note from the ground while bending backward, a Gujarati family decided to butt-in again and again. Supposedly to give the performer money, in the middle of her performance! The first time they did it, she accepted it graciously, the second time, she barely accepted it and tried to throw it into her thali and continue with the performance, while another lady from the same family was trying to butt-in for the third time!


Thankfully the performances continued, with just a handful of disruptions. 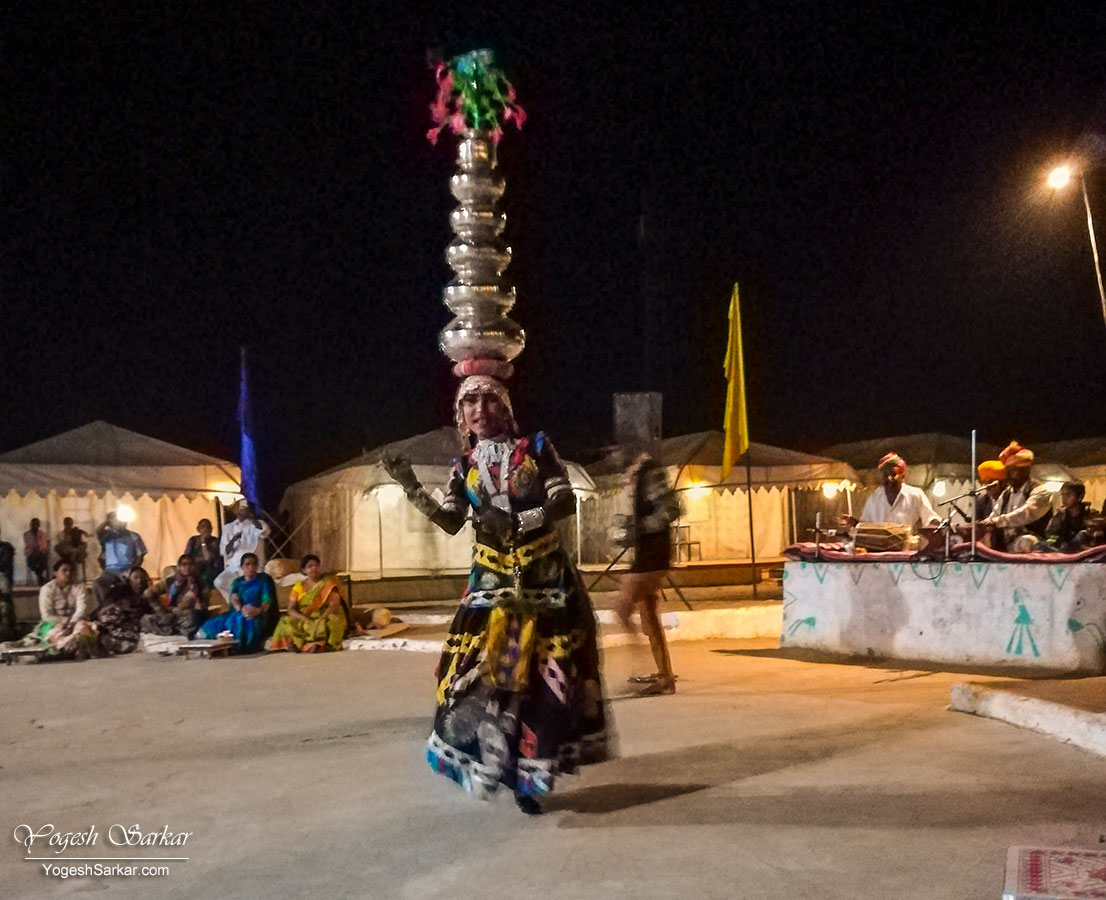 Sadly though, towards the end of the performance, the annoying Gujarati family and another one from Karnataka got a free reign, with the organizers allowing them to play their own songs! So for the next God knows how much time, they played everything from their own regional songs to Honey Singh tunes, turning a decent Rajasthani Cultural Event into a private party which saw other guests leave for their camps, including us, after we finished our hookah.

Thankfully though, the dinner was quite delicious and took away some of the bitter taste from the cultural night. 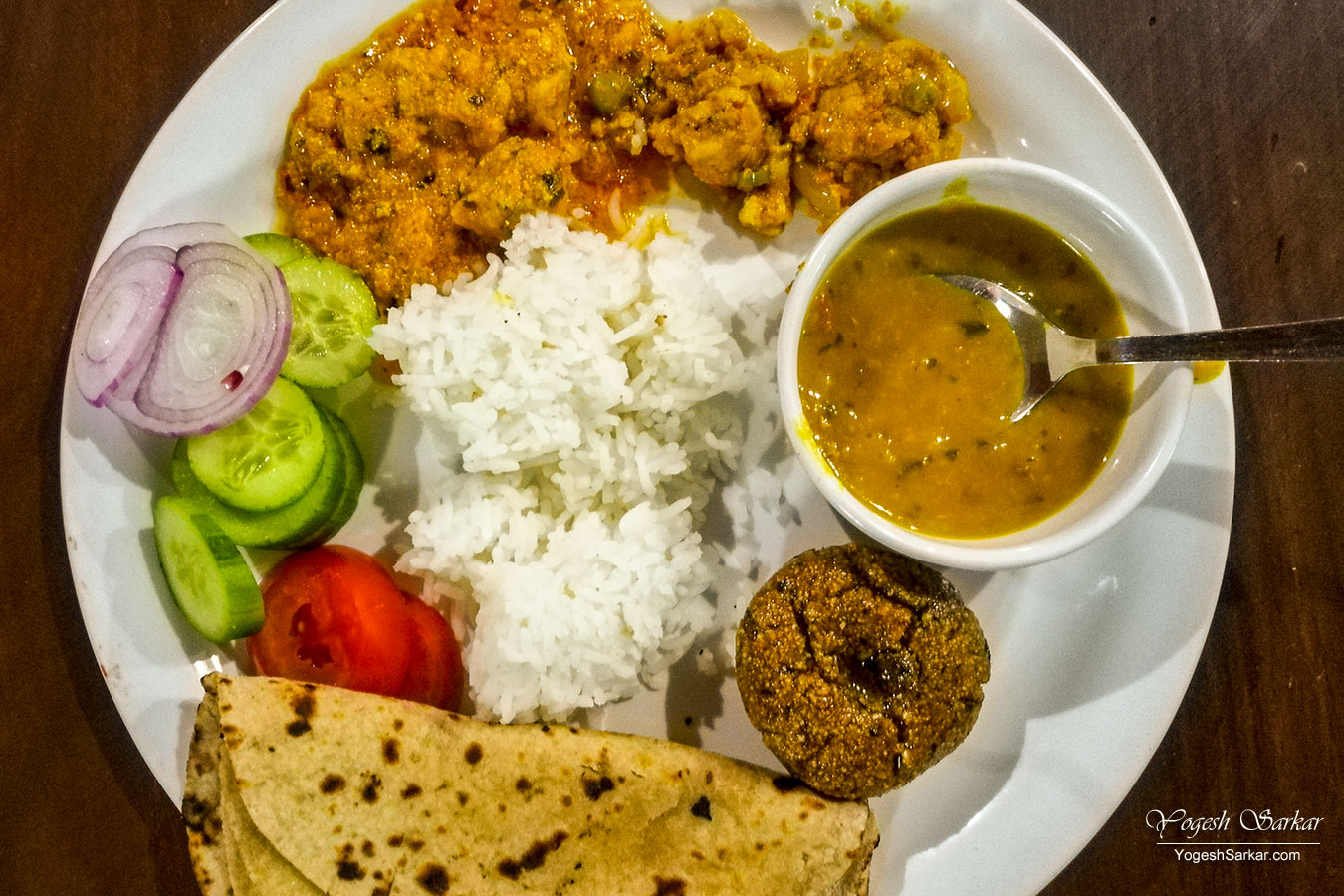 After dinner, almost everyone went back to their tents and slept. While I came out, sat infront of my tent and watched the stars over it. 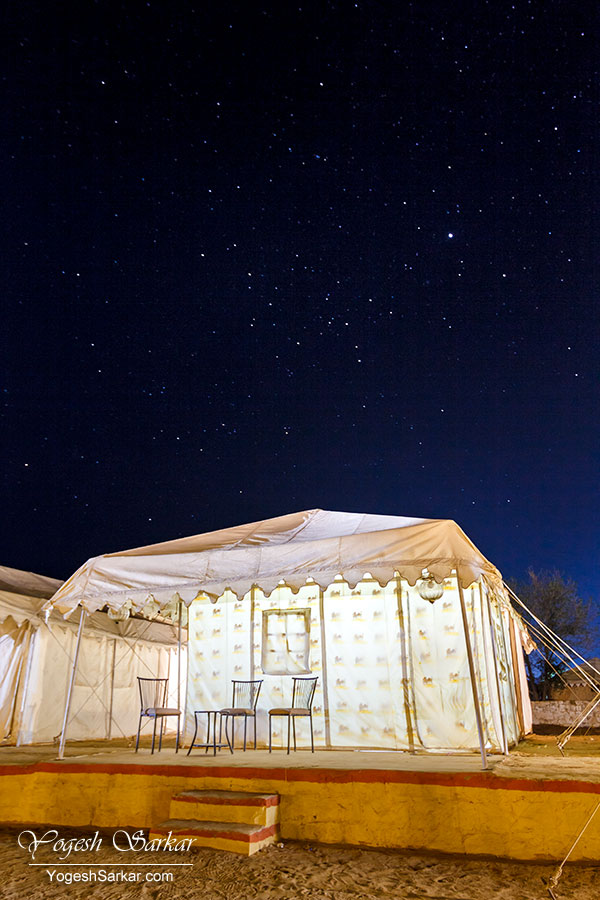 The gentle breeze and the quiet atmosphere, only occasionally broken by some drunk uncle shouting in another camp not far from ours was just what I needed. And I loved every bit of it. In fact, I loved it even more than the desert safari.

Well past midnight, after spending over an hour outside, I went back into my tent. It was time to catch up on some sleep…

@Yogesh Sarkar : Awesome update!
Saved it. Loving the coverage about logistic details in almost all your travelogues now.
Bring us next part fast...

Thank you Satinder ji and Sachin, next part coming soon.

Thank you. Actually I have been to Udaipur and so has Mansi, since we were short on time, we decided to skip it.

Slight correction, the dunes we went to, weren't Sam Sand Dunes. They are Royal Sand Dunes, a few kilometers from Sam Sand Dunes. At Sam, only Camel Safari is allowed, while at Royal, jeeps are allowed as well.
You must log in or register to reply here.
Share:
Facebook Twitter Reddit Pinterest WhatsApp Email
Top