I recently bought the new Royal Enfield Himalayan. This is a very brief review of the bike after completing 1000kms.

I had been happily riding my Thunderbird for the past 6 years, which took me to various places including Ladakh. However, the machine had gotten old after 80K kms of riding and I was looking for something new.

When the rumors about Himalayan started making the rounds, I got excited and was eagerly awaiting the new offering from Enfield stable. I took the test ride on the first day it was unveiled and I had made my decision. But, I decided to wait for a couple of months as I thought it was wise to get some more information on the bike including some user reviews. I did book it finally after seeing all the good reviews from the media and first hand information from my friend who was already owning one. I got the delivery after a waiting period of almost 3 months.

Now, I have ridden it for 1000 kms, most of it on the potholed roads of Mumbai and some highway riding to outskirts of Mumbai and here's what I have to say

Initial impression - The bike is a totally new with no resemblance whatsoever to any previous RE model. It has a different DNA. The fit and finish has improved and the instrument cluster is modern with a plethora of features. For me, the useful features are the twin trip meters and clock. Additionally, there is gear indicator, temperature indicator and a compass which I personally have not looked at much.

Positives - The ride quality, suspension setup and handling are really good. The bike is heavy, but you wont feel the weight while riding. Engine is smooth (the smoothest that I have seen in a Royal Enfield) and is happy to rev up. Brakes have good feel and inspire confidence. The tyres have good grip on all sorts of roads. Seat cushioning is adequate and you get proper support at the right areas. Riding posture is upright. Although I am not a high speed rider, I believe the bike is capable of cruising at around 90kph or even 100kph for long durations. I usually prefer to ride at 80-90 on good open roads occassionally going into the three digit zone. This, the bike can deliver and I am happy for that. The bike comes with a luggage carrier as standard. Plus there is a frame enveloping the fuel tank where you can attach luggage or jerry cans. Also, there are mounting features to mount the Aluminum panniers that come as RE accessories (Not available in showrooms yet). So, there is lot of space for luggage on the bike.

Some concerns - The clutch has a heavy feel and the gear shift is quite hard. Especially while upshifting, you need considerable force. I had reported this issue during the first servicing, but the service person informed me that this is how it is. He adjusted the clutch setting though to improve it marginally. But then, I got used to it and now, it is not annoying anymore. I can ride the bike in city with lots of gearshifts through traffic with ease. The exhaust does backfire sometimes especially when you release the accelerator after revving the engine to higher RPMs. I suppose this will get ironed out as I ride more. The seat height is 800mm which may be a bit high for shorter riders.

Overall, I think the bike is capable of delivering what it has been built for - Touring and Off-roading. 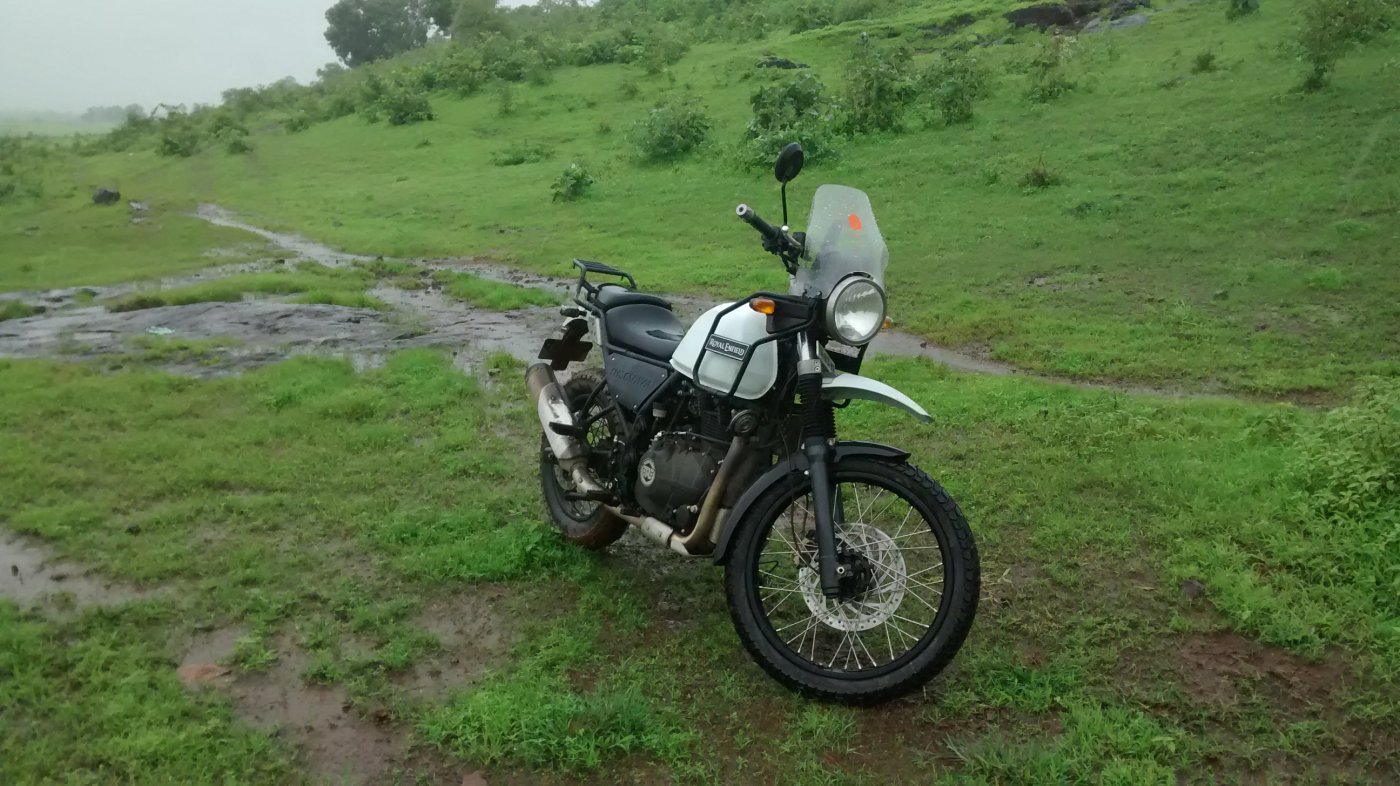 try replacing the clutch cable with the cable of c350 it will resolve the hard shifts issue.

Congratulations.
You are the right person to give 1st hand experience based comparative view on the TB and Himalayan on:

1. Seating and riding posture
2. Ride comfort (specially for long rides on highway).
3. Handling in the city.
4. Breaking ability.
5. Which is better in giving less strain on lower back and more comfort for spine.

IJS said:
try replacing the clutch cable with the cable of c350 it will resolve the hard shifts issue.
Click to expand...

Thanks for the suggestion. Has this been tried before?

Reading your ownership write up,the Himalayan fresh in my mind,was lucky to find the RE dealer on my way to work open with the shutter half down today-turned my car on to the side road into the dealer-a new employee was holding fort expecting lots of bookings for deliveries in Navratras and the festive season-filled the form,borrowed an open face helmet and 1 ltr of petrol in the Himalayan-and was off-the test bike felt a lot smoother than the one i had taken a test ride on April/May-had a good blast on the broken post monsoon roads for 40kms with the Mrs. on the back(whom i picked up from home for the pillion perspective)-and returned the bike a happy man with the sole bummer being the massive weight making itself felt while tip toeing in heavy city traffic and in the tight off road maneuvering-nearly fell off while taking a tight U-turn with the wife at the back and was just saved from embarrassment-saving the fall by a whisker- led to a lot of weight on my left leg and a tight spasm on the back-the bike is definitely not for short of leg and muscle

katrenikhil said:
Thanks for the suggestion. Has this been tried before?
Click to expand...

yes tried and tested and recomende by owners and service guys. it is the very first remedy for the hard shifts dont knoe why asc has not sugessted it yet to you.

long ride said:
Congratulations.
You are the right person to give 1st hand experience based comparative view on the TB and Himalayan on:

1. Seating and riding posture
2. Ride comfort (specially for long rides on highway).
3. Handling in the city.
4. Breaking ability.
5. Which is better in giving less strain on lower back and more comfort for spine.

1. Seating and riding posture - It depends on the roads that you travel on. If you go on smooth tarmac, the TB posture will be good as it is more relaxed of the two. In mixed roads and bumpy rides, Himalayan will be better as you can easily stand on the foot pegs if you want to in case the ride gets too rough on the bums. Also, seat on the himalayan is well cushioned.

2. Ride comfort - Here, the himalayan would win. For long stretches on highway, if you take the TB350, you would be left wanting for more as it really doesn't go beyond 80kph comfortably. The himalayan on the other hand can do higher speeds with more ease. Also, the smooth engine gives lot of confidence.

3. Handling in the city - Himalayan is more maneuverable compared to the TBTS. I haven't ridden the new generation TB on city roads and hence can't comment on its city handling.

4. Braking ability - Again, the himalayan has advantage of front and rear disc brakes. Therefore, it has better braking.

5. Strain on the back - I think both bikes are comfortable. I have ridden all the 80k KMS on the TB after being diagnosed with back problem (including Ladakh trip) - No complaints at all. I feel the Himalayan would be slightly better of the two as the vibrations are less compared to TB. With Himalayan, one thing is that since the suspension is so good, you will be tempted to take it through rough roads and potholes even when you can avoid those - just for fun. This uncalled for adventure may put more strain on the back With that said, I must say that it is equally important to do regular exercise of the back and neck muscles if you want to keep fit. Otherwise, long rides can take a toll on the back irrespective of the bike.

IJS said:
yes tried and tested and recomende by owners and service guys. it is the very first remedy for the hard shifts dont knoe why asc has not sugessted it yet to you.
Click to expand...

OK. Will ask during next service.
L

@katrenikhil . Thanks a lot for your crisp and clear responses. Precisely, the kind of answers I am looking for. Liked every bit of it.
I think on point no. 2 and FE too, Himalayan would compare with TB 500 more than 350!!
You must log in or register to reply here.
Share:
Facebook Twitter Reddit Pinterest WhatsApp Email
Top