Yogesh Sarkar said:
That tree is 475 meter tall or it is a distance marker on it?
Click to expand...

mousourik said:
It seems that the trees are numbered, as the one in the previous photo has 299 written on it.
Click to expand...

Yogesh Sarkar said:
I think you are right and it is not meter it is cedar written in Hindi along the number.
Click to expand...

this is 4.75 meters and actually its the girth of the tree.. there are many trees there with similar or even more width. Trees were separately numbered.

I need to get my eyes checked and keep my imagination in check as well .

Vijay09 said:
Stunnign shots man, Although all shots are too good but I liked the Thar with reiver side shot most.

Yogesh Sarkar said:
I need to get my eyes checked and keep my imagination in check as well .
Click to expand...

it happens sometimes with all of us

Fresh day at Chakrata was very pleasant. I ordered tea and started contemplating about my next move. I was feeling a little lonely, perhaps that is why I did not stay at Sankri and ran away. I decided to head back home. But not before I pay a visit to Tiger water falls which I hadn’t visited since August 2009. I checked out of Snow View hotel after finishing my tea. As I took the cut for Tiger Falls, I saw the board mentioning Lakhamandal. I was already harboring the thought of visiting Lakhamandal to see the Old temples there. This clicked inside me and I dropped the plan of return instead I would be going to Lakhamandal since the road leading to Chakrata would take me there too. Lakhamandal was hardly 70 kms away from Chakrata. Anyways, first Tiger falls had to be visited. It was barely 18-19 kms away from Snow View hotel.

Roads were good even though narrow at places. I reached the parking spot within an hour. The attendant told me that I can go further ahead with my car. The trek will be barely about 400 meters from there. I was glad and did exactly that. The road was not paved, it was katcha and overgrowth had depleted the narrowness even further. No two cars could pass each other without reversing and adjusting. Apparently a new road is being built to connect a village very near to the Tiger falls which will reduce the gap to less than 400 meters. Good for unfit people like us who don’t want to trek much. Walking carefully through the farms, I reached the waterfall in few minutes, barely breaking a sweat. Tiger fall was gushing down in its full glory splashing everyone who came near it. I was the first one to reach but shortly joined by a group of boys and a couple. Expecting ruckus from the boys who lost no time in opening bear bottles, the couple returned back with glimpses of Tiger falls. I stayed back and ordered tea from the shop near the falls. The tea was one of the best I had during this trip. After finishing my tea I too left leaving the place to the enjoyment of band of boys.

Came back to the main road leading towards Lakhamandal. Going for the next 30 odd kilometers was smooth with nicely laid roads. However, the last 20 kms before Lakhamandal was absolutely devoid of any tarmac. Mercifully, it was well rolled up atleast. Also, the entire route was very remote with hardly any noticeable settlement. The area was dotted with tiny villages. The 50 kms journey from Tiger falls to Lakhamandal almost took 2 and half hours to complete. However, the journey was worth taking the pains.

The ancient temple complex is a Shiva temple which was excavated by ASI. The main attraction of this place is a graphite lingam which reflects greatly when water is poured over it. People flock to see themselves on the wet lingam. It is amazing to see a reflection like a mirror. Also, the main temple possesses a lot of old sculptures and idols which interests me immensely. It is believed to be built during 12th or 13th century. However legends links it with Mahabharata and Pandavas. They also say that Lakhamandal was actually Lakshagrih during the Mahabharata period. Pretty amazing. I spent close to an hour at the temple. It was already late in the afternoon and I was feeling very hungry. I left the temple looking for some place to eat, however was not able to find one. While moving towards the Yamunotri road from Lakhamandal side, saw a cave temple and stopped. It was enticing so I left within five minutes in search of food. After crossing a bridge over the Yamuna River, I joined the Yamunotri road once again. At that junction there was a small dhaba which served me Tea and bun-maska. That was it, my late lunch.

the foot prints embedded in stone

this is not the granite lingam

front view of the temple 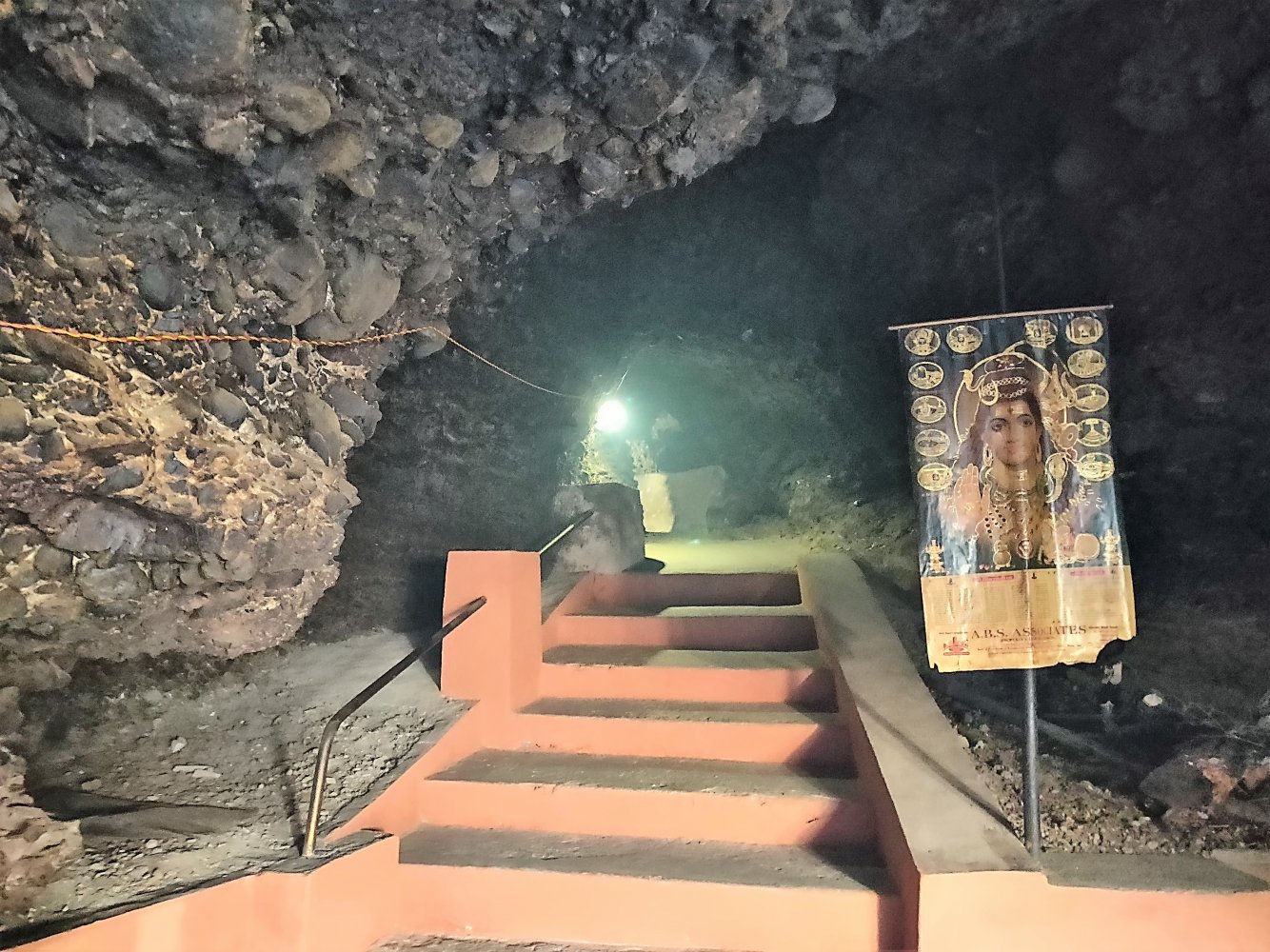 across lies the Yamunotri road

and a well deserved lunch

Carried on thereafter till Mussoorie. Stopped at a hotel by the road after crossing Kempty falls but well before the main Mussoorie town. The Hotel was newly built and absolutely empty. The rooms were very good and comfortable. My comfort rose more so when I had to pay only 700 bucks for the night. It was all perfect for me. Order veg biryani for dinner and after consuming it went to sleep. Next day was going to be just a timid drive back to home. However, the stretch around Chutmulpur was horrible with four laning works underway and traffic jams. Again, the Modinagar-Muradnagar stretch was nerve wrecking. It took almost 12 hours to reach back home and I breathed a sigh of relief. A solo trip after a long time was over.