Satopanth Trek- On the trail taken by the Pandavas.

I call myself an avid trekker,but thats a debatable question as my friends argue that I am rather a pseudo one as I never accompany them on treks in The Western Ghats or to any nearby hill. However, trekking interests have always been inclined towards the Himalayas.

My fondness towards them began when I underwent a 6 day basic adventure camp conducted by YHAI(Youth Hostel Association of India) at Dalhousie when I was 9 years of age. Since then I make it a point to not miss a chance to go to The Himalayas. Meanwhile I also found a mentor who I call as a Trek Guru Mr. Prasad Acharya at the right time.
What more can I ask for, so I started to frequent with their group. I undertook five expeditions with them of which include Chandrashila Peak aka Tunganath-Deoria Lake, Gaumukh-Tapovan, Roopkund,Bhadraj Devta Peak- George Everest Camp.

After a long wait of two years(Screw those entrance exams), I once again got a chance to trek in Himalayas. This time it was to the Satopanth Tal, a serene and a sacred lake located in the Uttarakhand at a height of 15,100 ft above the main sea level. The story associated with this trail is pretty interesting which I am going to narrate in this post.

Day 1- Caught an early morning flight to Delhi. From there drove to Shivpuri Camp near Rishikesh. I was thrilled to camp here as you when you wake up and come out of the tent to see the Mighty Ganges drifting, but this time I was disheartened as the camp site was shifted to a totally shitty place owing to the 2013 Floods due to which the permission to camp near the river bed was cancelled.
This was the view from Shivpuri Campsite in May 2013, a month prior to the floods. 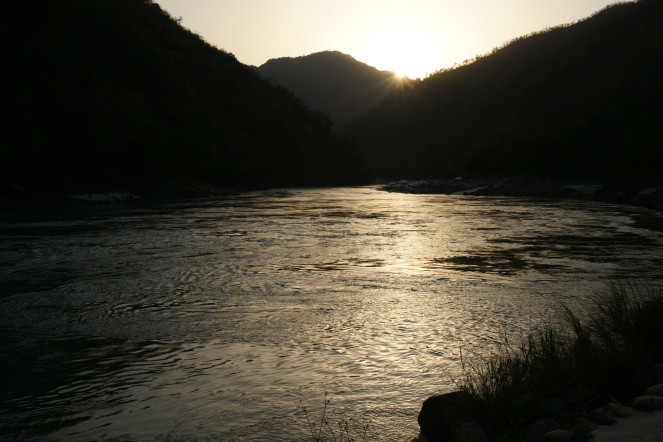 Day 2- Drive to Badrinath from Rishikesh. En route via you see a lot of confluences of rivers like Dev Prayag, Rudra Prayag, Karna Prayag, Nanda Prayag and Vishnu Prayag of which I find Dev Prayag most facinating. Dev Prayag is where the actual Ganga forms after the convergence of two rivers i.e. Alakananda and Bhagirathi. You can quite literally make out the difference between the two just by its colour. After a long bumpy drive we eventually reached Badrinath by 8 at night.(Not to forget endless hours of Antakshari on the bus with the typical start Bete Bete Kya……)

Confluence of two rivers at Dev Prayag.(This picture is taken from the internet) 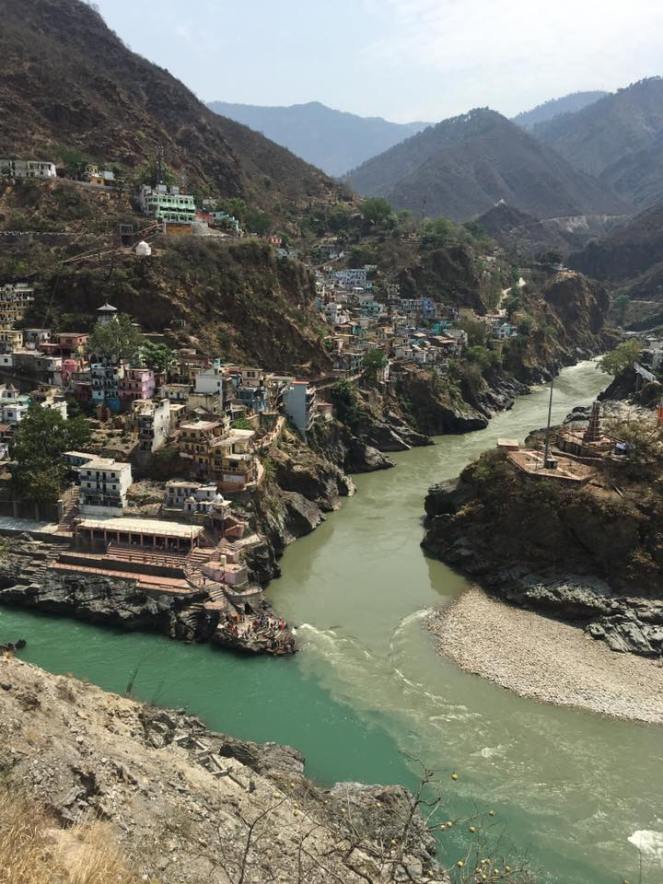 Day 3- After taking bath in a hot water spring called Tapt Kund we paid a visit to the Badrinath shrine which is considered very sacred among the Hindus and is one of the Dham among the Char Dham as established by Shankara Acharya in the 9th Century. We finally got the glimpse of the deity after a wait of two hours in the morning biting cold. Then we walked to Mana which is supposedly the last village in this part of India, 24 kms further is China. Thus you see ITBP patrolling around.

We started our trek from Mana by around 11 and our target of the day was to reach this place called Lakshmi Van. From here you start taking the route taken by the Pandavas while going to the heaven. We were told that Lakshmi Van is hardly around 7 kms from Mana and an easy terrain. But the case was totally different here,the trail was extremely rigid and probably not being acclimatized made it harder. In between we had to cross a glacier which was shattered on the right side and we were crossing on the left. As Summer had not yet hit, it was safe to walk on this Dhano Glacier and Sherpas verified them first and declared that these glaciers were risk-free. But however a slip can sulk you down the glacier but we somehow took the courage and crossed it. After a prolonged weary trek of 12 kms we finally reached Lakshmi Van and a mere sight of the camp site made us so satisfied. As soon as we reached the camp we slipped into our sleeping tents and went into a deep slumber.
Continuing with the story behind the place, all the Pandavas come till here and the twins Nakula and Sahadev breathed their last. 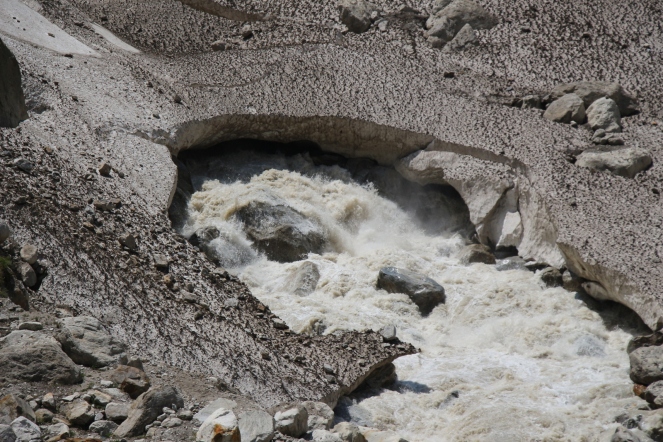 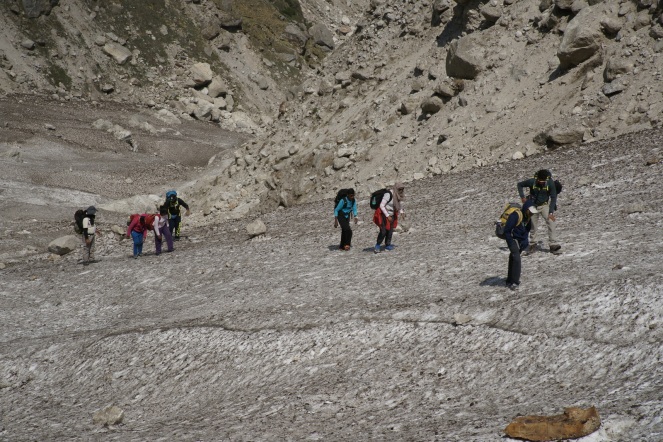 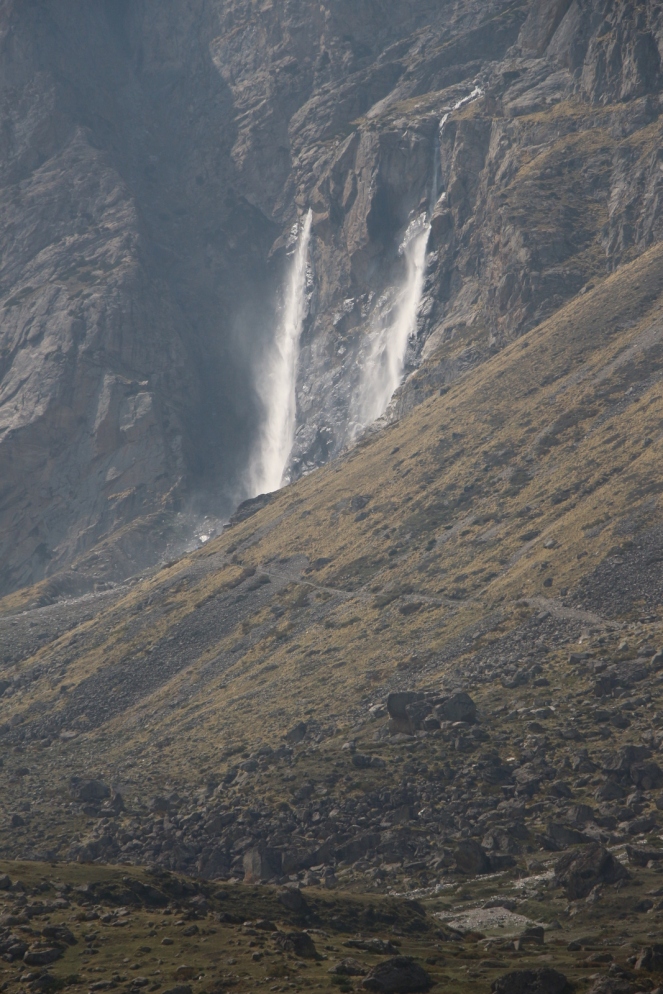 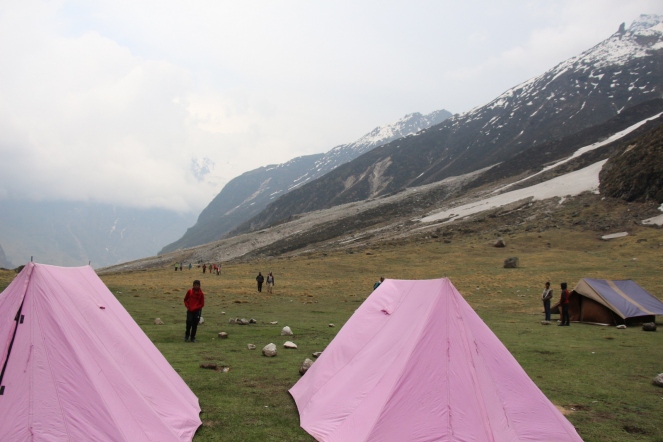 Day 4- Trek to Sahasthra Dhara Falls right next to which we had to pitch in our tents. This was the picturesque campsite. Sahastra Dhara literally translates to 1000 waterfalls but we could see around 100’s of such waterfalls. This is ostensibly the place where Draupadi laid down her life.

Here again we were told that it was 8 km trek but yet again we had to cover 12 kms(Thanks to technology due to which we could measure the distance quite accurately). Halfway through which you find a small stream which we had to cross in our bare feet. My feet quite went numb and took a while before it could come back to its shape. Here while we waiting for the entire team to cross the stream we heard a thud and turned back to see a small scale avalanche and were frightened to see huge boulders fall from a great height which was not so far from the place we were resting . All us of stood petrified seeing that, however we moved on taking a longer and a safe route. As soon as we reached the camp, Maggi and Chai were awaiting which was a perfect combo at that low temperature. We spent rest of the evening discussing an array of topics ranging from life,philosophy,ghost stories,himalayan mysteries etc.

Sahastra Dhara. It starts from here and falls extend upto another 6 kms further. 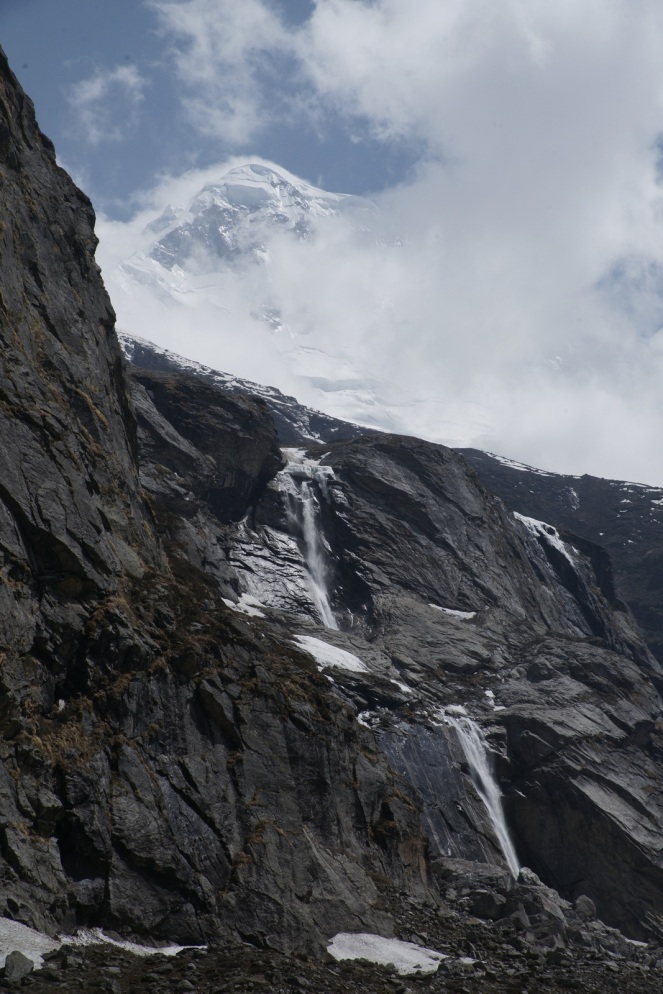 The stream through which we had to cross bare feet. (Tough to decipher whether its water or milk) 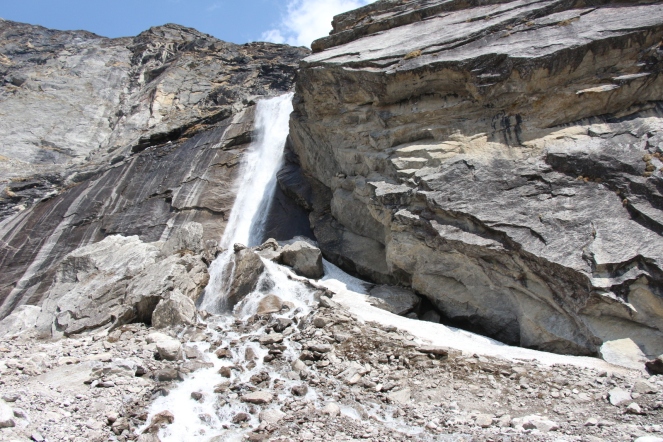 Day 5- It was a red letter day as we were supposed to hike to the summit. We planned to start from the earlier day campsite reach Satopanth Tal by afternoon and come back to the same campsite. As the terrain was extremely strenuous we were advised by the guide that only few of us could make it to the summit and the rest had to gone down to Lakshmivan due to various reasons like muscle cramps,health complications due to high altitude sickness,breathlessness and a few were first timers. So only 14 of us were selected to undertake this arduous task and I was one of those lucky chap. I am extremely grateful to those 27 people who turned back without any reluctance after all we were a team and we successfully did it.

We started as early as 730 in the morning and had decided that if we didn’t reach Satopanth Tal by 1 we would turn back. As we continued the terrain became tougher and tougher. As we came 4 km away from the campsite we came across this place small patch of grasslands called Chakrateertha which was absolutely scenic and mind you this was last place where we saw some vegetation and from here it was all loose moraines and a landslide prone region.Chakratheerth was the place Arjuna breathed his last. It was already 1 and Satopanth was just a kilometre away so we continued to ascend and finally reached the lake. The slightest glimpse of the lake gave utmost satisfaction to the mind. We went down to the lake and did meditation sitting on the rocks beside the lake. We also drank the holy water and it was really tasty and sediments mixed with it made it more tastier.
Later the Sherpas who accompanied us did their regular Pooja to the lake. Right before the lake there is a grave of Bhimsena and Dharmaraya takes bath at this lake and goes a little further where the celestial body Puskpak Viman arrives and takes him to heaven via Swargarohini.

All of us were hungry to death by now and also the food packets we carrried had gotten over, we desparately needed something to quench our starvation. One of the Sherpa who had foreseen this situation gave us Poha(Avalakki) packets there. It was one of the best meal I have ever had in my life. We all later wished him a saying in Sanskrit i.e. Anna Datoh Sukhi Bhava which roughly translates to whoever gave us the food let his life be happy. After spending an hour there , we began to descend and reached our campsite by 7 in the evening. That night the temperature went down to -3 degrees and the Sherpas took utmost care of us and served us the spiciest and hot Khichdi which was synchronous with that weather. 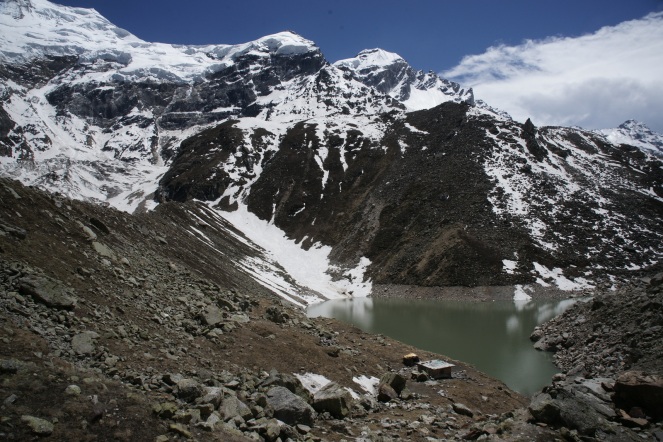 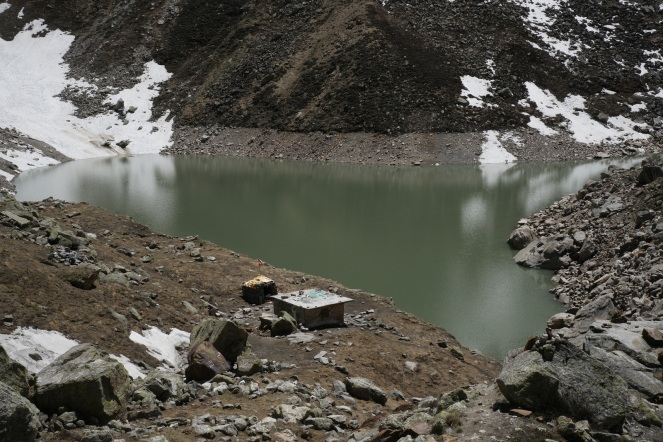 Myself at Satopanth Tal 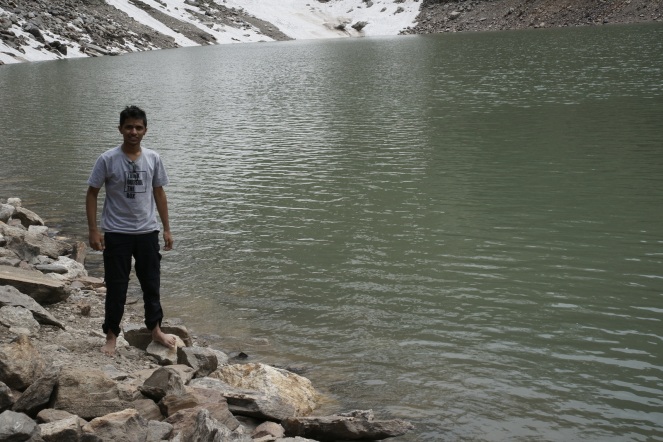 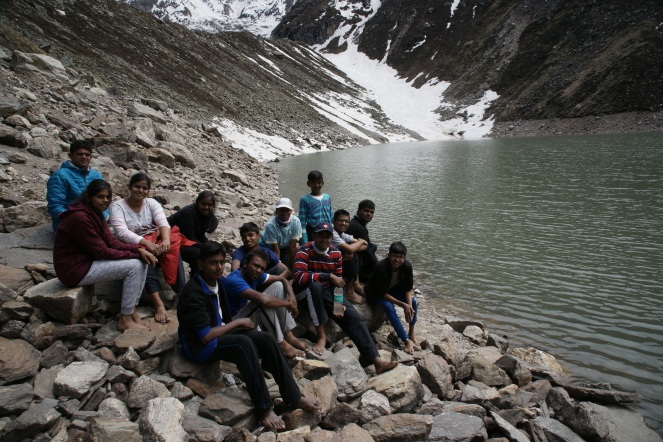 This is said to be the burial place of Bhima. 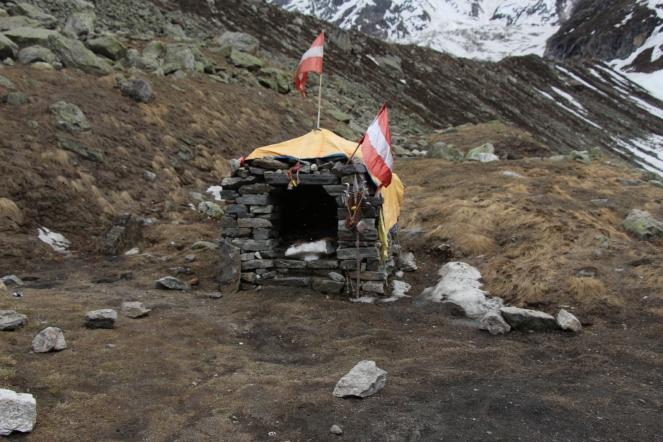 Mt. Neelkanth from the other side. 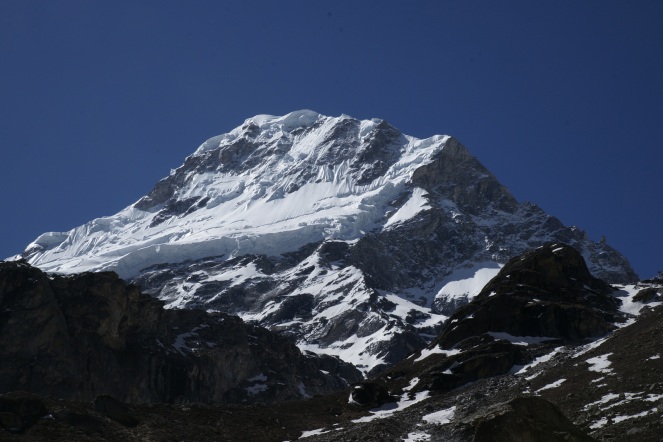 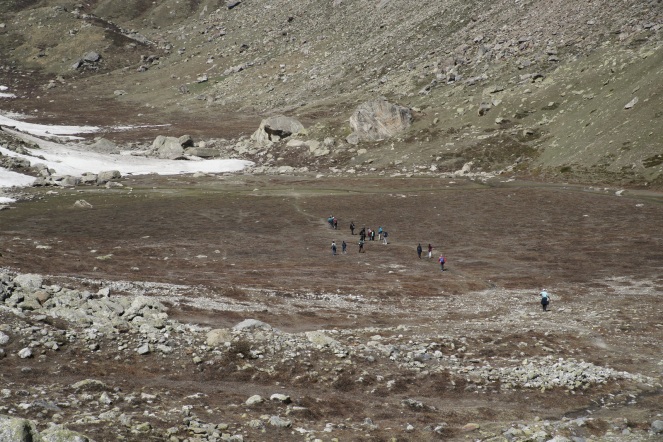 Thanks to Mother Nature for favoring us to the utmost. This was while coming back after summiting Satopanth. Such contrasts of weather, scorching sun rays in the morning,pleasant breeze ushered by the fog and snow fall in the night. 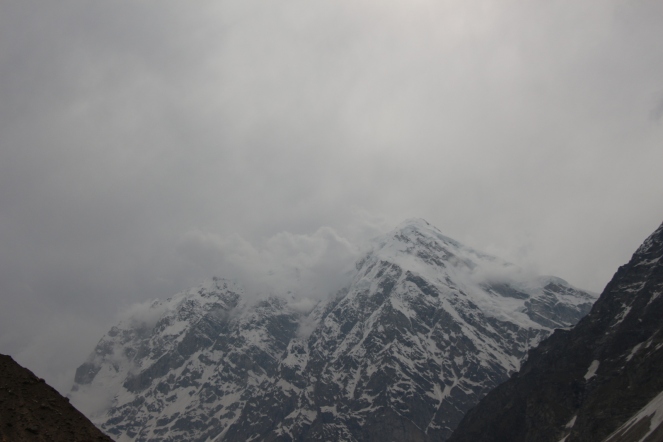 Day 6-Down the hill trek of 22 kms to Mana Village.
We started by 6 here again and the trail didn’t seem tedious at all as we had seen a hell’s route previous day. We reached Mana by around 3 in the afternoon and visited few places of interest there which include caves like Ganesh Gufha and Vyas Gufha which is where Bhagvan Vyas dictated The Mahabharat to Ganesha and then there is Bhim Pol which is a bridge built by Bhima.
You also see River Saraswati gushing out of the cave and vanishes underground due to the curse of Bhagvan Vyas who wasn’t able to dictate Mahabahrat due to her roaring sound. Ah, such riveting stories of mythology.

River Saraswati gushing out of the cave. 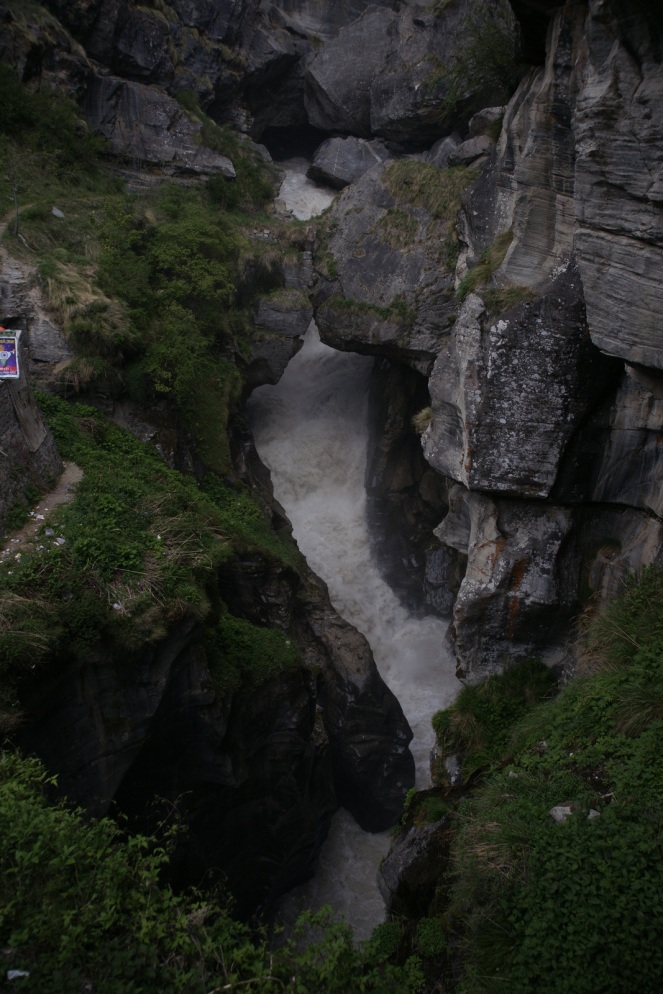 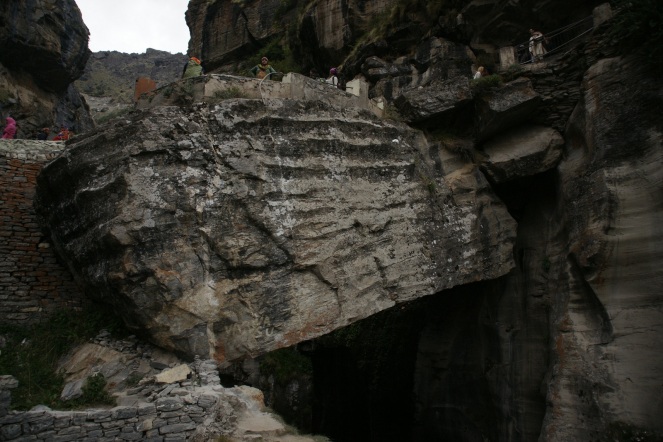 Day 7- Drove from Badrinath to Rishikesh which consumed our whole day.

Day 8- We planned to end this enthralling expedition with an adventure. So rafting on the mighty Ganges was like the perfect icing on the cake. Later we drove to Delhi overnight.

Adios Himalayas until next time! 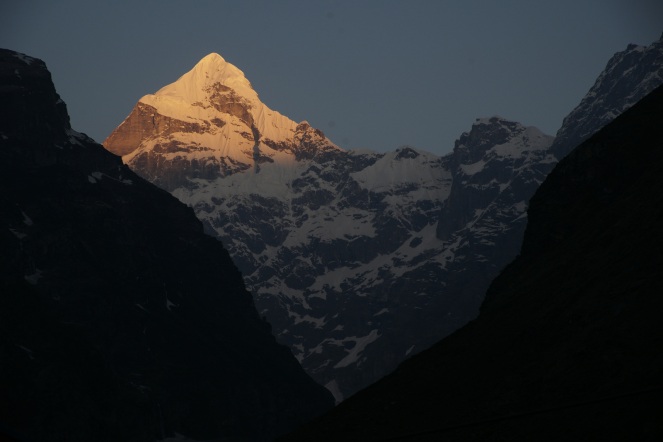 Mt. Parvati on the left and Mt. Satopanth on the right. 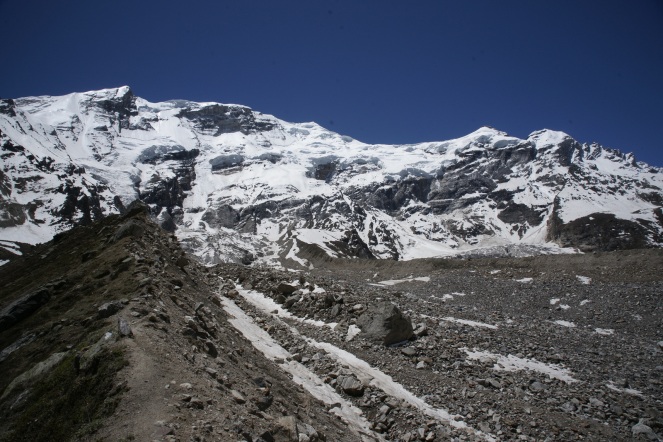 Loose Moraines on the way and at the backdrop is Mt. Chaukambha 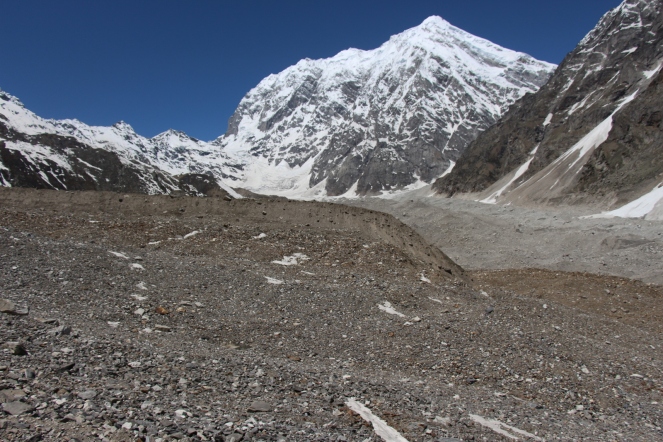 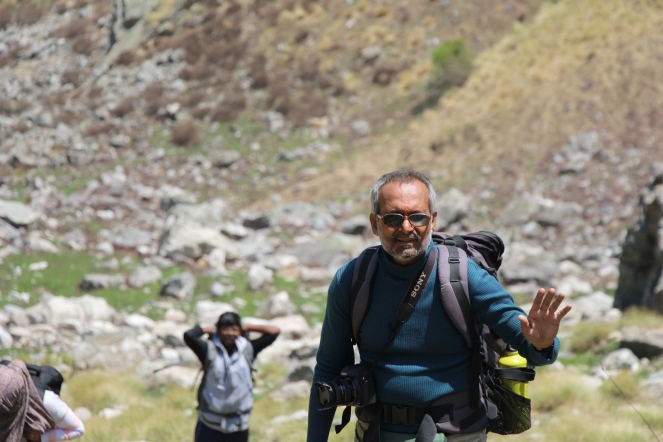 One of the water streams on the way as pellucid as it seems. 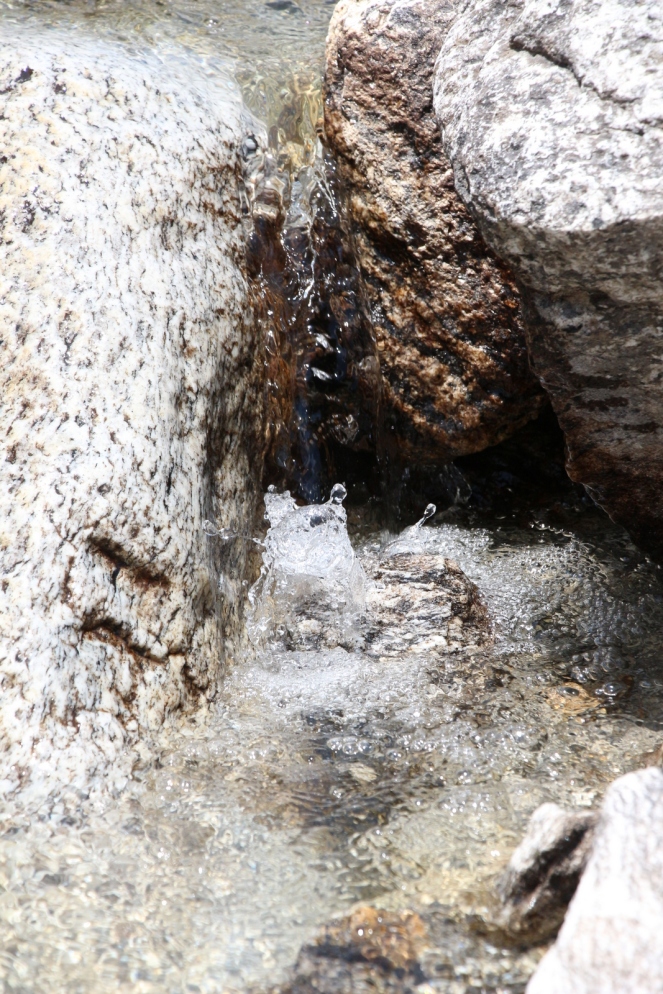 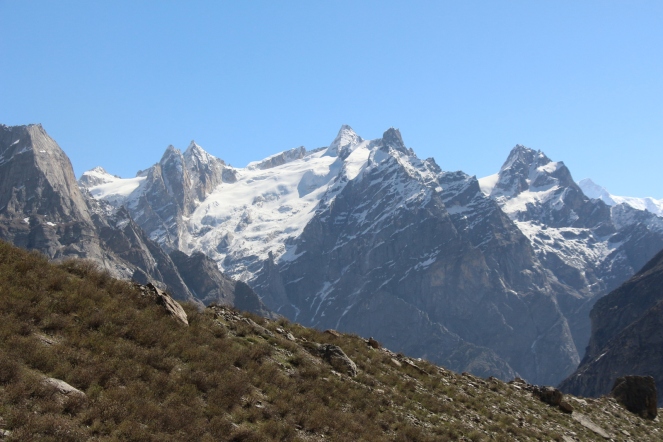 Trek SAndakaphu in the month of October... a divine experience.
S

Sent from my Lenovo A536 using Tapatalk

Sent from my Lenovo A536 using Tapatalk
Click to expand...

Thank you.
We hired Sherpas from Mana.


BHOOTER RAJA said:
Trek SAndakaphu in the month of October... a divine experience.
Click to expand...

Thank you.
Sandakphu trek is in my bucket list. Will do it soon.
Last edited by a moderator: Jul 13, 2016

Welcome to BCMT Surya.. Good to see your blog here.