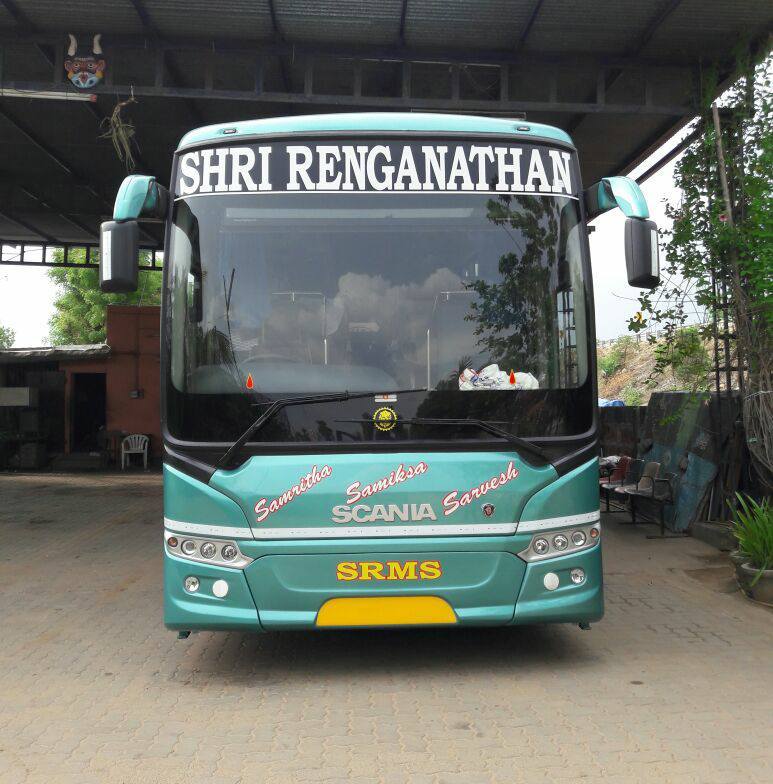 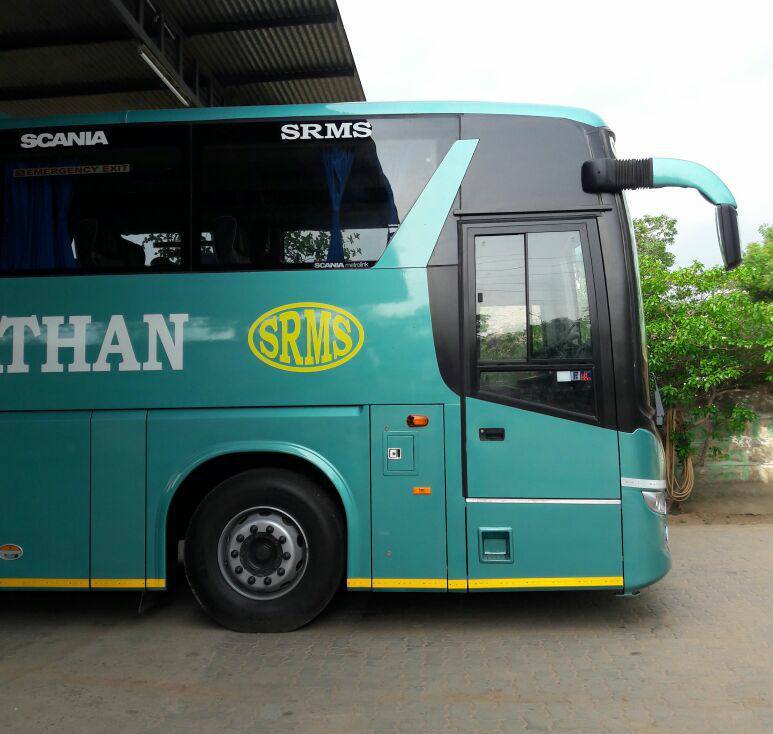 TransIndia Brand New Scania
Picture Credits : Respective Owners
Route : MUMBAI TO PUNE TO WAIPHATA TO SATARA TO KARAD TO KOLHAPUR TO BELGAUM TO HUBLI TO BELLARY TO TIRUPATI BALAJI 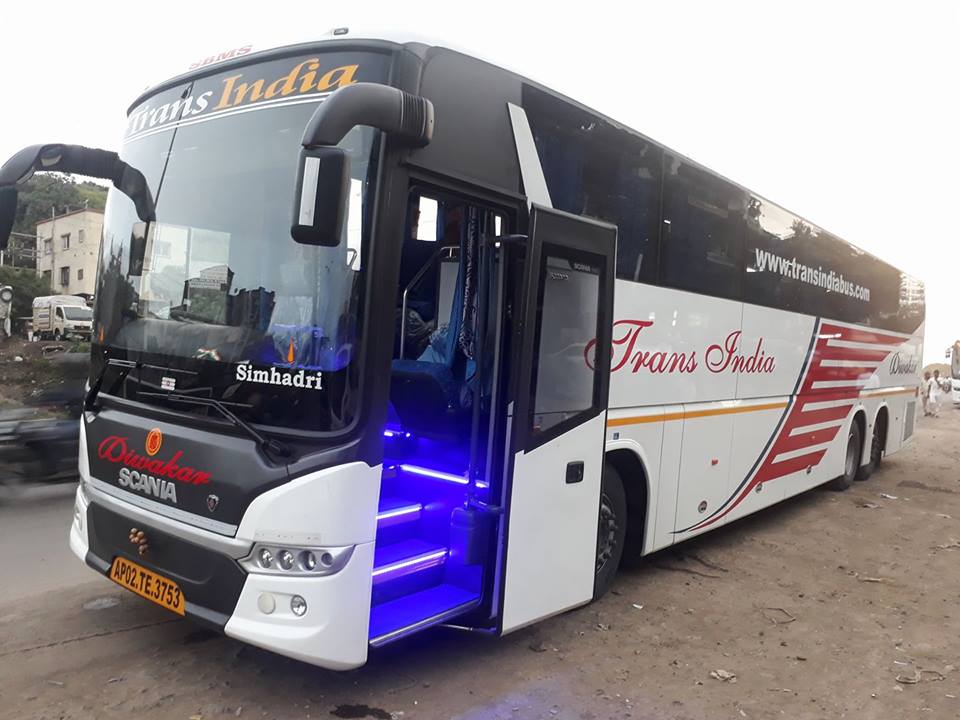 Sent from my SM-N920I using Tapatalk

Sent from my SM-N920I using Tapatalk
Click to expand...

After long weekend, i left home and reached K.Rpuram Ganesha Temple around 10:50am and bus schedule at 11.50am. Was chatting with my friends. The Bus was 30mins late. Conductor insisted for I.D proof even though i had print-out ticket. I booked seat 39 for extra legroom near emergency exit (since i'm tall) but unfortunately fellow passengers packed their luggage there and hardly any legroom left

even the overhead bins were full, why can't they put their baggage in the boot

. I really got irritated, shuffled the bags and got my space back, few passengers gave a cold stare

. Then i sat peacefully and to my surprise the old air vents of scania were replaced by user-friendly ones (similar to the ones in volvo). Good initiative by KSRTC

. The bus & interiors were in good shape but few ill fittings were present. The first driver was too slow

and kept lugging the engine & second driver was fast,sleep friendly & unfortunately the first driver took over after the 2nd break. Reached CMBT by 19:15pm. Overall the journey was Good apart from those nuisance luggage & lugging driver. 
I reached Dadar at around 18:40 and I was amazed to see a huge queue for booking of Shivneri. The queue for Swargate was less but for Pune Station, there was huge line. So decided to take Swargate bus. It was my first experience in Shivneri and I was hoping for the so known and so famous 'Ashwamedh’ to be my ride to Pune. As I was standing in the queue at Dadar TT, I saw the huge monster turning in below the Dadar TT flyover (Asiad bus Terminal for Pune bound buses). And luckily the board also read 'Dadar - Swargate’. The bus arrived but the doors were closed as cleaning of bus going on. This is a good point as the bus has very less turn around time. So back to the line, the line ahead was enough to tense me and I thought that I would miss ‘Ashwamedh’. As the line was progressing, the bus was getting filled. The bus got 3/4th full As I was nearing the counter. As my turn came, I gave ₹456 and bought the ticket for Swargate. The ticket showed Seat no. 50. So it was 'Ashwamedh’ for me today. But I didn’t know that the seat 50 is an aisle seat or window seat. But my luck favoured and it was second last right hand side window for me. So I was lucky enough to get a seat (window seat) in Scania. For the first time I was on a seat above the engine. I could hear the noise from the engine but it was pleasing. The interiors were in good shape and the bus clean from inside and outside. The bus was in top notch condition. The AC was set to optimum temperature. The bus was full from Dadar except the last row four seats. We departed Dadar at 19:25 and we were greeted by traffic. The engine sound was audible but it was under control. Passed Sion at 19:35. We encountered slow moving traffic at Chembur. We were stranded in traffic for past 15 minutes. We were slowly progressing through the traffic. Slowly we reached Chembur (Maitri Park) at 20:03. The last four seats were filled at Maitri Park. Departed Maitri Park at 20:09. But ahead, it was a similar condition of traffic. Sharma Travels and Kanade Celeste Sleeper overtook us at Maitri Park when we were stopped for pickup. A Purple Volvo was giving company to us in the traffic. It was a horrible traffic snarl. Soon we were joined by Amuul Chintamani Ac Sleeper. The traffic got worsened as we neared Eastern Freeway Junction. We were at the same place for past 15 minutes. We passed Eastern Freeway Junction at 20:30 simultaneously overtook the Kanade Celeste Sleeper. Crossed Vashi Creek at 20:40. Kanade Celeste Sleeper again overtook us in between and we again overtook Kanade Celeste Sleeper at Vashi toll. We surpassed Sharma Volvo also at Vashi Toll. We passed Vashi at 20:46. We crossed CBD Belapur around 20:55. The opticruise was working fine with smooth gear shifts. The bus was now speeding on the Sion-Panvel Highway. We reached Kharghar by 20:58. The bus was handling the undulations on the road perfectly. The suspension was preventing us from small potholes. We left Ka mothe at 21:03 and exited Mumbai Metropolitan Area. Now we were on the Expressway and it was an open field for Ashwamedh for speeding. But our bus was speed locked at 85 kmph. Couple of Shivneri’s and Ashwamedh’s passed us in opposite direction. We were doing good speeds in the range of 85-90 kmph (As shown in GPS). We crossed Khalapur Toll Plaza at 21:30 and stopped at Khalapur Food Mall at 21:35. VRL Volvo Sleeper gave us brief company for 5 minutes and it left. There were couple of Hirkanis and a Shivneri to Pune Station parked ahead of us at the Foodmall. After sometime, Corona Sleeper arrived, it was doing Borivali-Thane-Belgaum schedule(NWKRTC). The stop was brief. We left Food Mall at 21:55. We started ascending the ghats and the beast was handling the ghats excellently. There were some slow moving trucks which were some of the obstacles for us in the ghats. Meanwhile some bags fell from the above rack while maneuvering sharp curves in the ghat. The driver promptly turned on the lights to help the passengers to keep the luggage back in position. I liked this courtesy of the driver towards his passengers and hence Shivneri is the best preffered option between Pune and Mumbai. Meanwhile we again encountered slow moving traffic at Amrutanjan bridge. We passed Amrutanjan bridge at 22:10. We entered Lonavala tunnel at 22:11. I was expecting the time of arrival in Pune to be around 23:30. We passed Lonavala around 22:20. We were doing around 90 kmph and maximum recorded by the GPS was 106 kmph. We passed Talegaon Toll Plaza at 22:40. We exited the Expressway and joined Pune Bypass at 22:50. Now I was assured that we will reach Pune before 23:45. Ashwamedh tried to gain up the time wasted in traffic in Chembur. The driver used the mic announcement system for announcing dropping points which was a good sign and full use of Scania. We reached our first dropping point Wakad at 22:56 where a couple of passengers were dropped. We stopped again at Baner to drop couple of passengers at 23:04. I was dropped at Chandani Chowk by 23:12. It must have reached Swargate around 23:45. Overall a good experience of Scania and my best journey from Mumbai to Pune. While alighting, I noticed the odometer which showed the reading of 145948.4 kms. This is the best service of MSRTC between Mumbai and Pune.

At Dadar, there were many private Tempo Travellers, Innovas and Ertigas hunting for Pune passengers at a rate less than the ticket of Shivneri which is an 'illegal’ business but there was a huge crowd for our MSRTC Volvos and Scanias. And hence, I am proud of MSRTC for managing and maintaining the brand of 'Shivneri’.

Last but one row tickets were booked.

The last pick up point was Columbia Asia Hospital, to our bad luck the police had blocked the road. SRS Mysore office said the driver to ask passenger to come in Auto. Driver denied saying that you tell passenger and I do not have money to pay incase passengers demand refund. Finally the bus was parked before Srirangapatna along with Mumbai bound AC Volvo Multi Sleeper. This was due to the rally closure near Mysore – unexpected traffic jam.
The tempo traveler was arranged to pick for both buses. The Tempo traveler came only by 20:50 hours. In the meanwhile lady passengers were shouting on the driver!
Bus started and in next 20 minutes bio break was provided to Ladies, after bio break driver had gone wild and was driving in zig zag manner to show his frustration, stopped for dinner break at 22:05 hours at Fish Curry and Rice [normal joint], accompanied by Kaveri Multi, Orange Sleeper and Orange Mercedes Benz. Dinner break lasted till 22:50 hours.
I requested driver to cool down and drive safely, post dinner the bus was driven steadily, The traffic was still heavy, there were 15+ passengers to board Chennai – the pick up van was waiting in Kengeri to take them on nice road to Electronic city / Bommanahalli. The bus took the Magadi road to reach Ananda Rao and Race course office at 1:30 hours. Dropped first Bangalore passenger and then there was a lady passenger to Pune and the bus had proceeded; she was accommodated in a hotel for overnight stay and was booked in Indore bus departing at 7:15 AM.
Bus started from Racecourse after picking 40+ passengers around 1:45 hours. Crossed Hebbal at 2:00 hours to cross Kurnool at 6:30 hours, post which at Ghar dhaba bio-break was given.
From here again the first driver took to driving and it was a non-stop till Shamshabad 9:20 AM [arrival at Mehedipatnam post flyover at 9:40 AM]; this is what I liked about unlike in KSRTC ACC which would have been excursion trip.

By the time I reached home it was 11 AM. SMS received as KA01AE2596, casual attitude of the person entering data. Don't understand the impact to people with multiple buses to board.
Last edited: Jan 31, 2018
D

My friend and colleague travelled in Kallada Scania departing Coimbatore on Sunday Mar 04 to Hyderabad. He was in front row and was troubled with Bed bugs. Bus was full no seat adjustment possible. He got rashes, so he had to cut short the journey in Bangalore and take the flight from Bangalore to Hyderabad!

Bed bugs is a nuisance for bus passengers and operators! Operators cannot relax & need to maintain / fumigate the buses on regular basis.
D

Onward journey he traveled by Alhind Scania from Hyderabad to Coimbatore. Departed from Mehedipatnam at 5 PM and reached Coimbatore 6:30 AM.
No mercy for late passengers, were left behind.
Friend was narrating of an incident, Aramghar the bus pick up time was 5:20 PM - bus reached at 5:15 PM. Passengers had not arrived. Driver called the passenger and said sorry it is 5:21 PM and I am starting - we do not have time to wait and zoomed off.
Gooty bypass was closed owing to an accident - traffic was diverted via Gooty town, lost 45 minutes. At Hotel Raviteja the bus was stopped only for 15 mins dinner break. Post 15 mins the bus was started and honked for passengers to board the bus.
You must log in or register to reply here.
Share:
Facebook Twitter Reddit Pinterest WhatsApp Email
Top