I saw this earlier, didn't recognise GLR, then a few minutes ago, sitting on toilet, it suddenly dawned on me!

Please tell him I said Hello.
Remembered for the writing style, the ladies toilet story, and Goverdhan parikrama.


DeadnLovingIt said:
An online tribute to YS from a friend who was a member of this forum long back! Some people may recognize him..

"Had my own set of differences with him, in opinions, in perceptions, was banned from his online forum a long back but death is painfully cruel when it comes to sorting out differences.
It literally makes you whimper down and regret that you had them and makes you think if you could've sorted them out much earlier.

Credit where it's due!

The guy literally made me feel comfortable in doing bike trips instead of looking them as a taboo, his experiences shaped my future plans and helped planning their execution successfully, he brought out the curious side of me and I also enjoyed seeing the world through his camera whenever I got a chance to. Although our ways parted accounting for indifference in our opinions but hey it doesn't matter.
Today, he's gone! Gone for once and for all. Died due to AMS in Ladakh. Funny, he went there 12 times earlier and died on his thirteenth attempt. Talk about allegories and anecdotes.
Yogesh Sarkar, Founder of BCMTouring.com - You still had ages left, what was the need of going on this godforsaken trip man?
Rest in peace, eternally and I can only hope that the heaven high up there is more spectacular and stunning than you were sick with on this land.
Hari Om Shanti boss!
Your foe? Your friend? Make your choice man, you're free now."
- GLR
"
Click to expand...

I saw this earlier, didn't recognise GLR, then a few minutes ago, sitting on toilet, it suddenly dawned on me!

Please tell him I said Hello.
Remembered for the writing style, the ladies toilet story, and Goverdhan parikrama.
Click to expand...

I remember GLR and his ladies toilet story. He became pervertlookingrascal after that. I do not know why he was banned, I am sure Yogesh regretted his decision later because I think I was not much different than him.
J

Screenshot of my last chat with him.. he was so excited to use that kindle.
I was so eagerly waiting for him to come back from his trip to take his views on a travel itinerary. I had never met him in person, never even heard his voice over calls, only through whatsapp and Bcmt. But still it seems there is such a large vaccum now. He helped me a lot last year for preparing my first ever ladakh trip. He answered even the silliest of my questions with lot of patience. I remembered all his advises when my son was hit by AMS at pangong and it was because of YS only that we could have such a safe and meticulously planned trip.

And now when I think of him going and that too in ladakh, I believe ladakh would never be the same again for me.. may his soul rest in peace.. 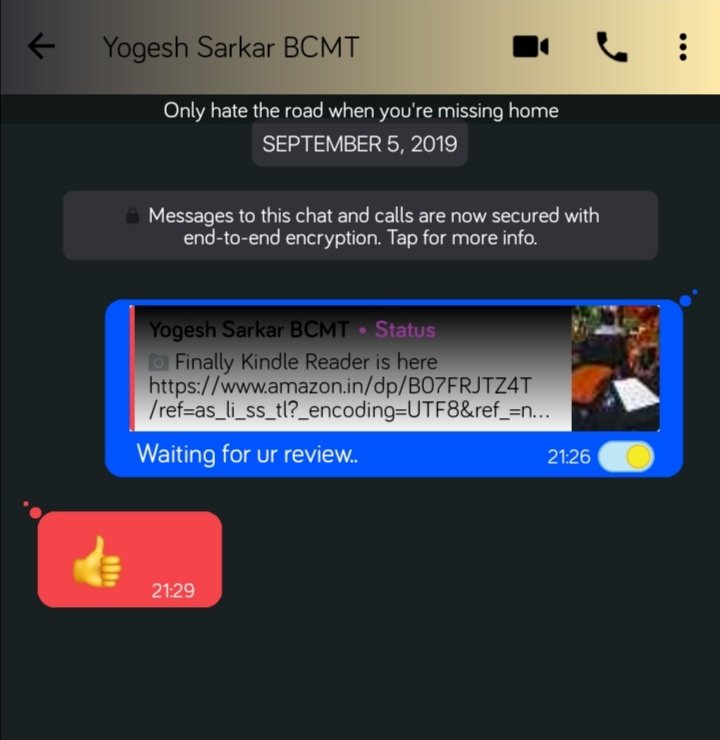 What does one write for a person whom I have never met but his passing away feels like a deep personal loss.

Yogesh always responded to comments and his response was always kind, caring and genuine. His pictures were inspiring but more was his spirit and love for travel. I remember reading a travel log where he just went to the bus station and travelled to a place he had heard about - 2 days of travel in normal state bus to the destination, an overnight stay and then back to Delhi. This 4-day bus ride travel evoked numerous emotions - envy, a deep desire to travel like that, and admiration.

I have spent hours on this forum, reading about places that I dream of travelling to, reading about places that I have been to. Yogesh made this possible - he created the forum but more than that he managed it with the help of like-minded people. I have admired many here, follow them on other social media platforms, befriended them on FB. This was possible only because I got to know them through their T-logs on the platform that Yogesh created.

May he rest in peace and strength to the family. Loss of a loved one always remains and he was loved - dearly,
S

Shocked and deeply saddened by the news of Yogesh Sarkar passing away.
Rest in peace friend.