Thanks @sanuroxz
Currently caught up with work

, so not able to update it. But will do it very soon.

Hats off to you sir for such an incredible effort on a motorcycle great set of pictures and narration.

I was going through your logs and they were just awesome, beautiful pictures.
R

WELCOME TO THIS WONDERFUL COMMUNITY !!!
What novice ? It is a seasoned log with excellent photos bringing out Sikkim's beauty !

rdp said:
WELCOME TO THIS WONDERFUL COMMUNITY !!!
What novice ? It is a seasoned log with excellent photos bringing out Sikkim's beauty !
Click to expand...

Thank you for the praise @rdp . It is so beautiful out there that you just point your camera and shoot and pictures turn out to be beautiful. But still it does not reflect what you actually shoot with your eyes

Day 4 (20th Oct)
Today was the day, we bid goodbye to Pelling. Woke at 5:00 in the morning to get a glimpse of the snow capped mountains but it was not to be. The mountains were covered with clouds. Went for a morning walk, walking through the lonely roads, watching people waking up to life. It was really refreshing walk. Today we got ready by 8:00, had a small breakfast with Britannia Nutri Choice and Sneakers and started our journey.

Our first destination of the day was Khecheopalri lake or Khechuperi lake. It is also known as the wish fulfilling lake. It is a very sacred lake for the Buddhists. The road to the lake was very calm and it gave us sense of solitude. But when we reach the lake, we were completely taken aback. It was very crowded as some rituals were going on and we could sense the presence of some very important people among the crowd. So, we could not spend a good amount of time in the lake and we left thirsty 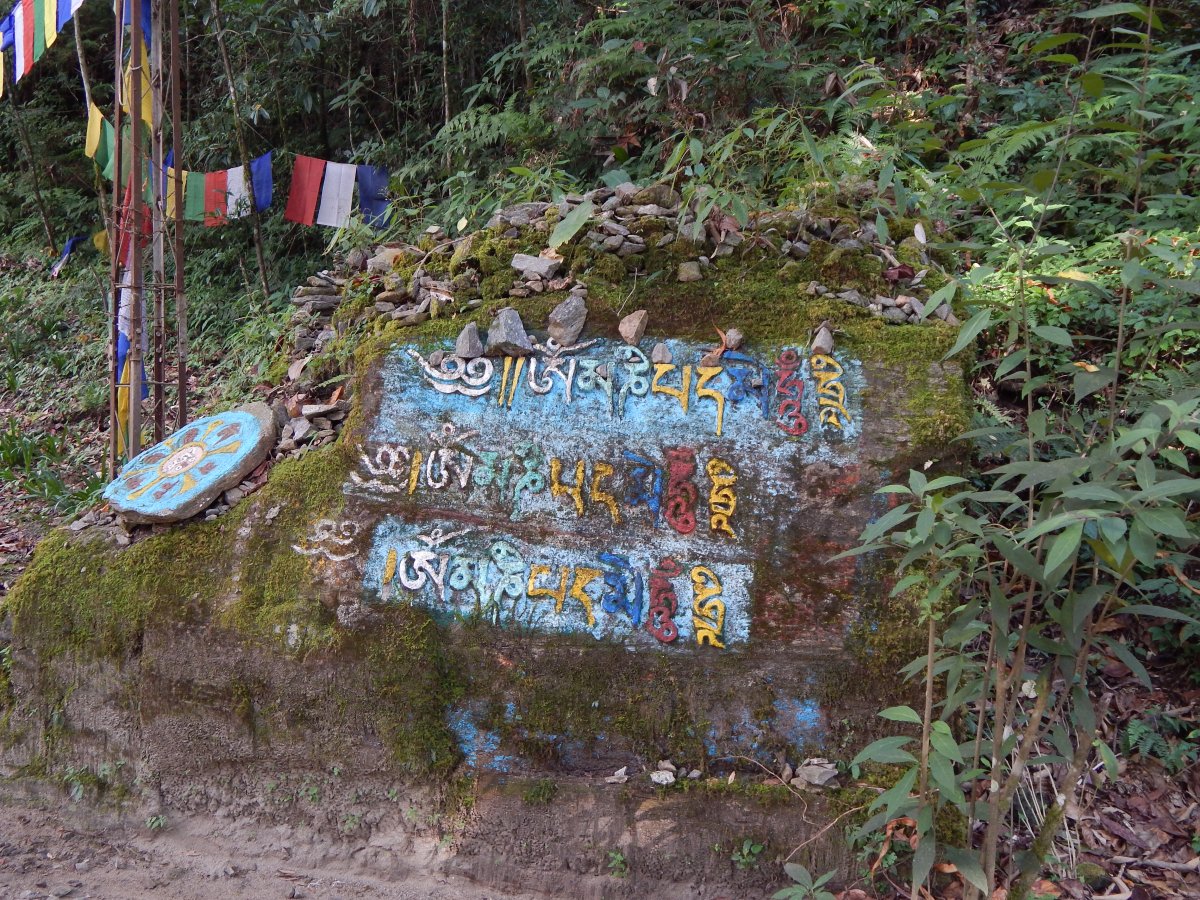 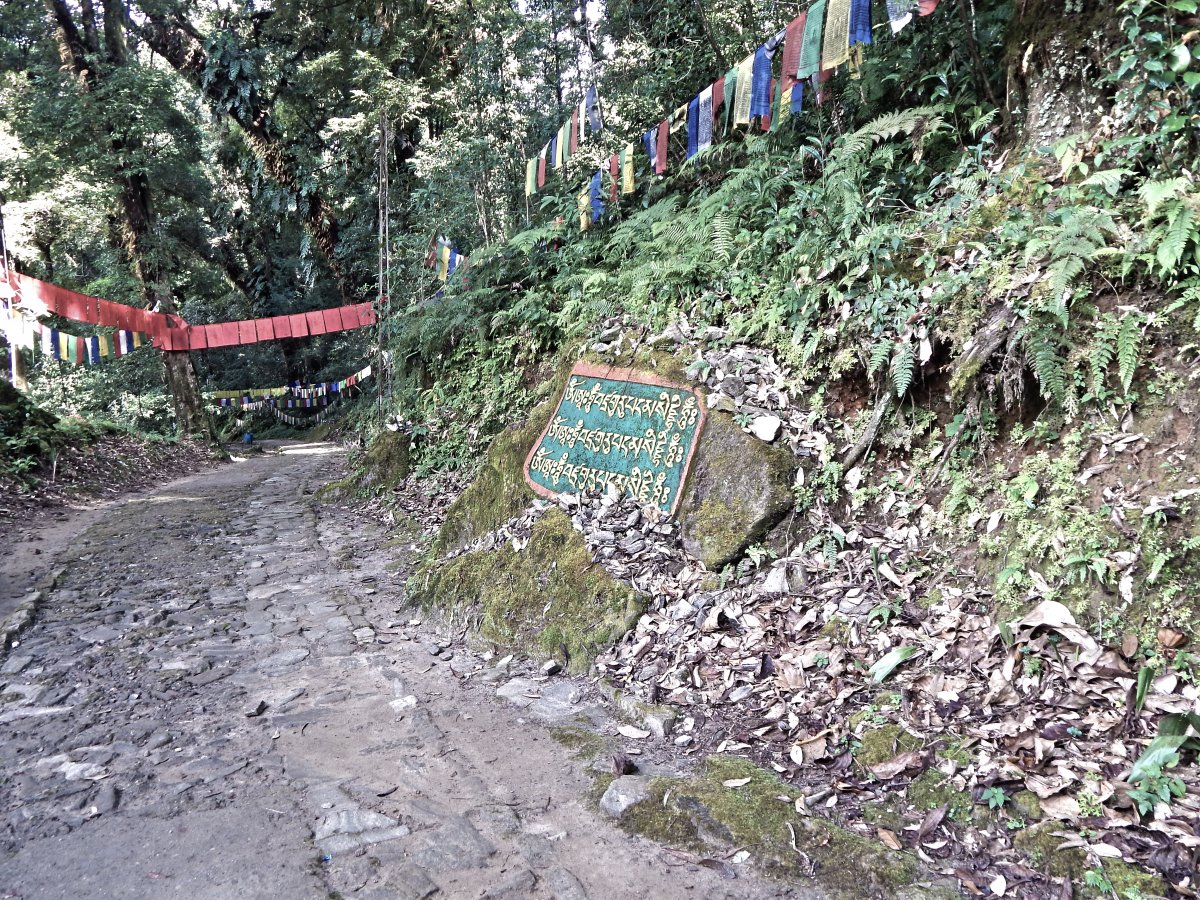 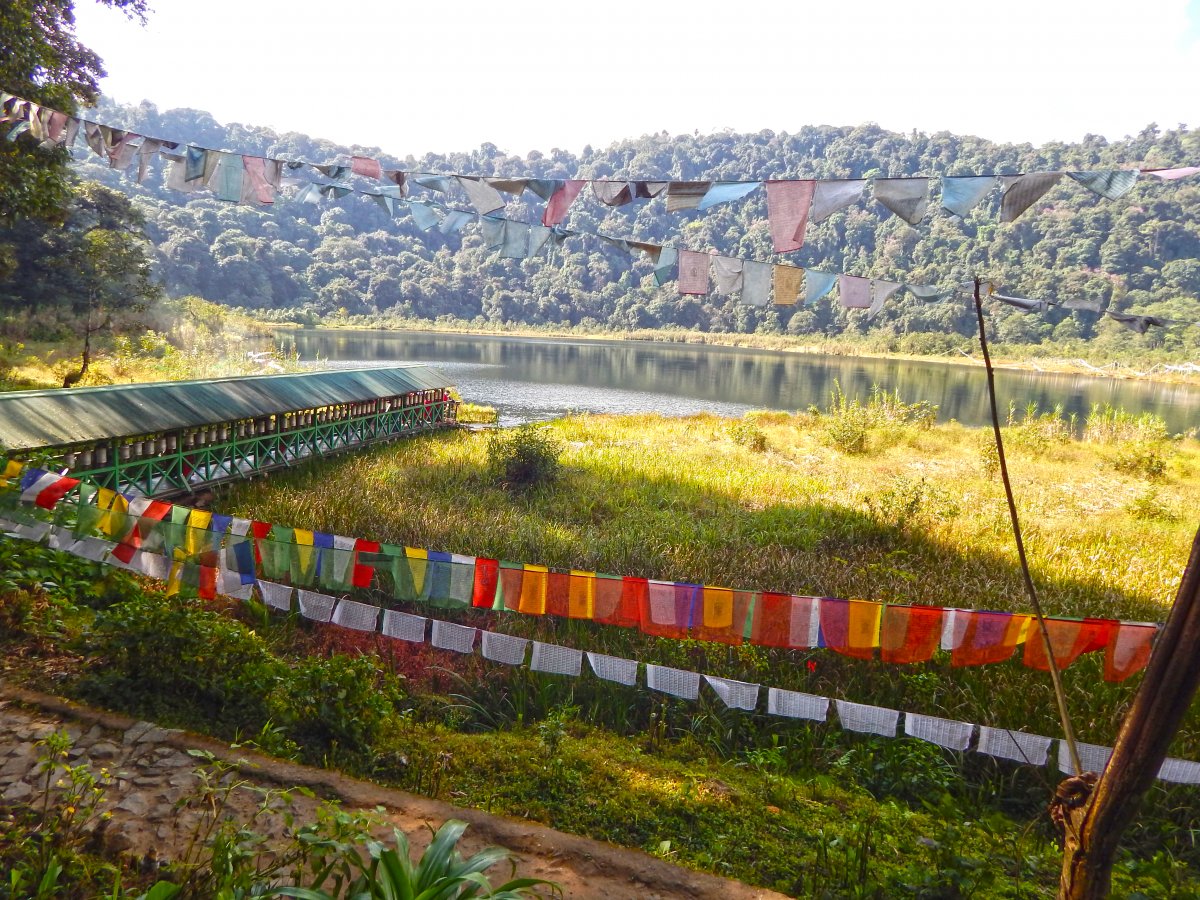 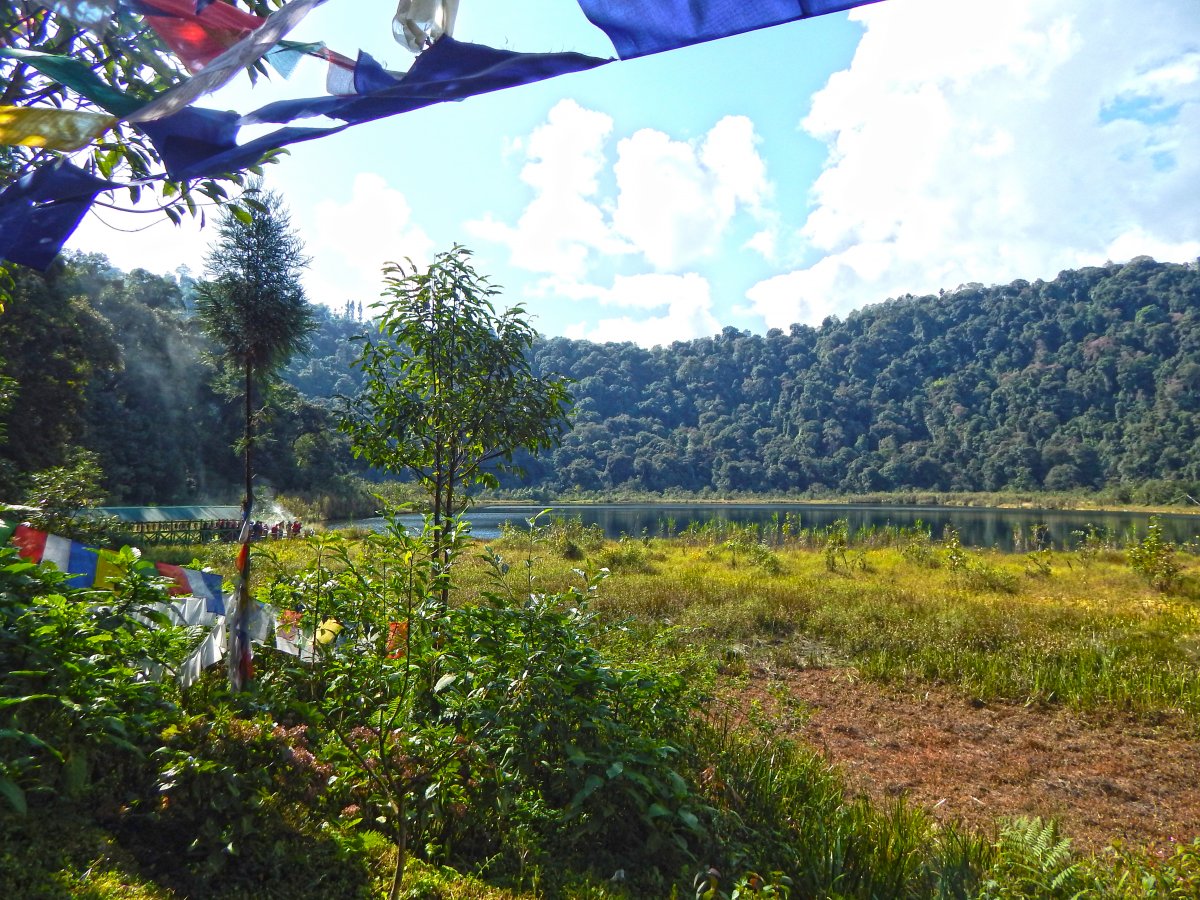 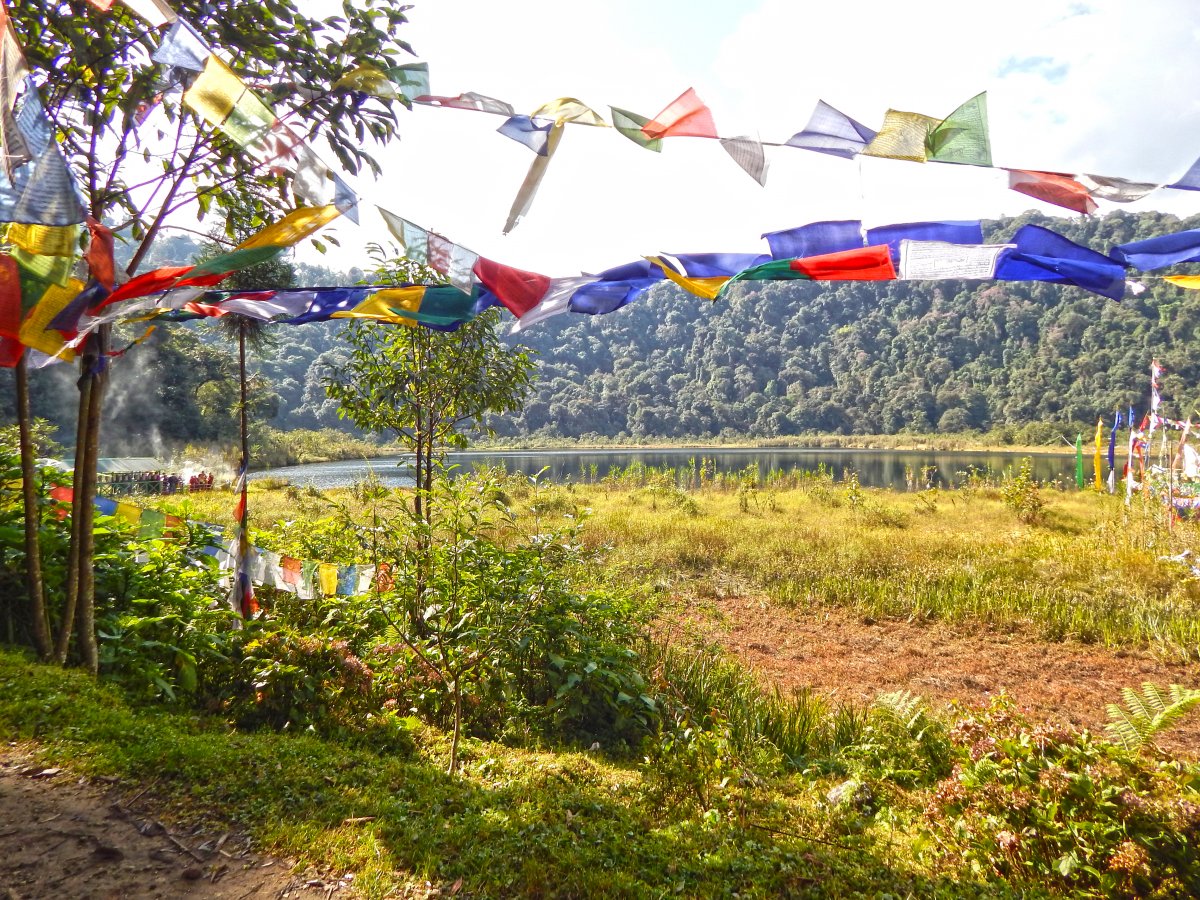 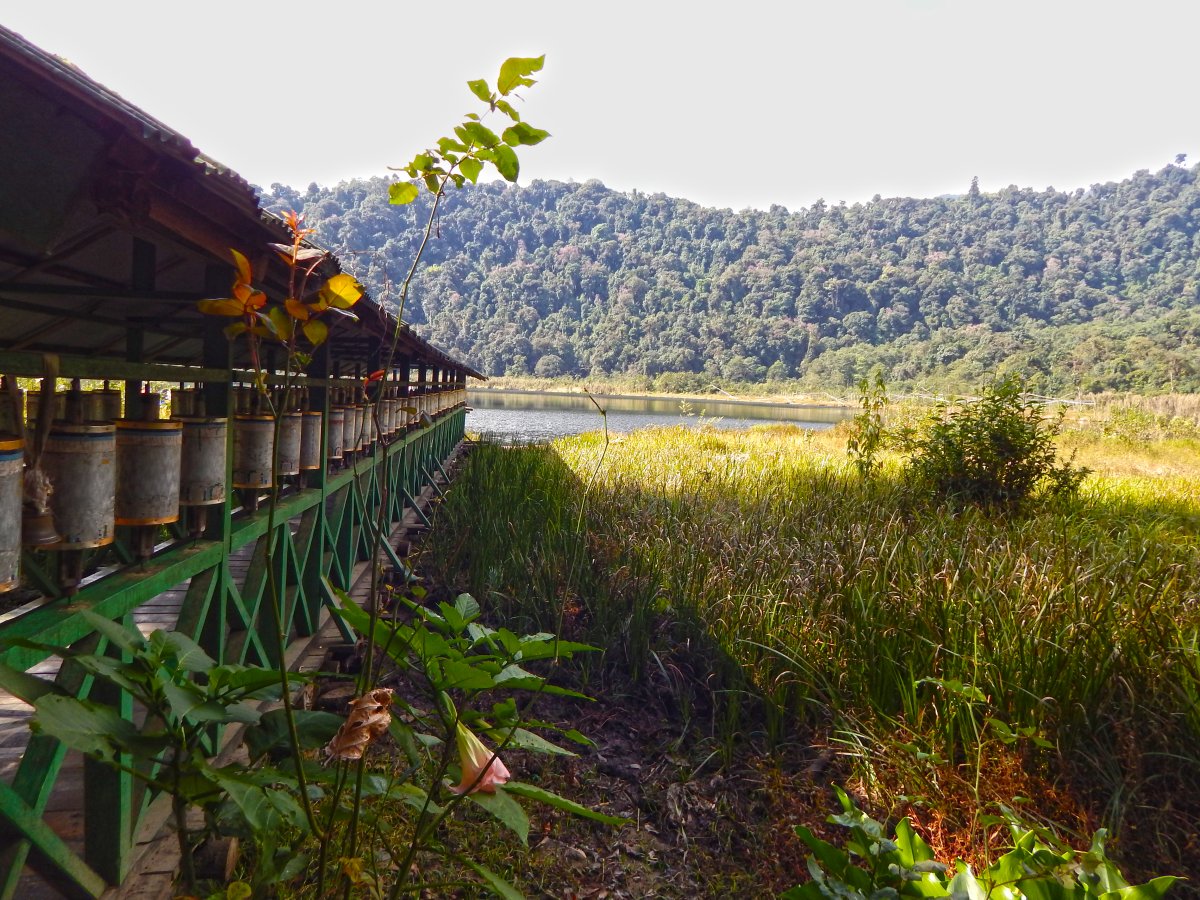 Disheartened, we came back to our car and started for Kanchenjunga water falls. The road from Khecheopalri lake to the falls was full of twists and turns and numerous hairpin bends. The view from the moving car was so good that I didn’t take any snaps, some things I guess should be felt through the eyes only.

After about 1 hour, we reached the falls. But it was very crowded, full of tourists who were shouting in high pitch voice. I really didn’t feel like staying there. So, I didn’t go up with my cousins, instead I found myself a good momo shop and devoured some delicious momos But upon requests from my cousins for a good picture, I had to relent and go near the falls. 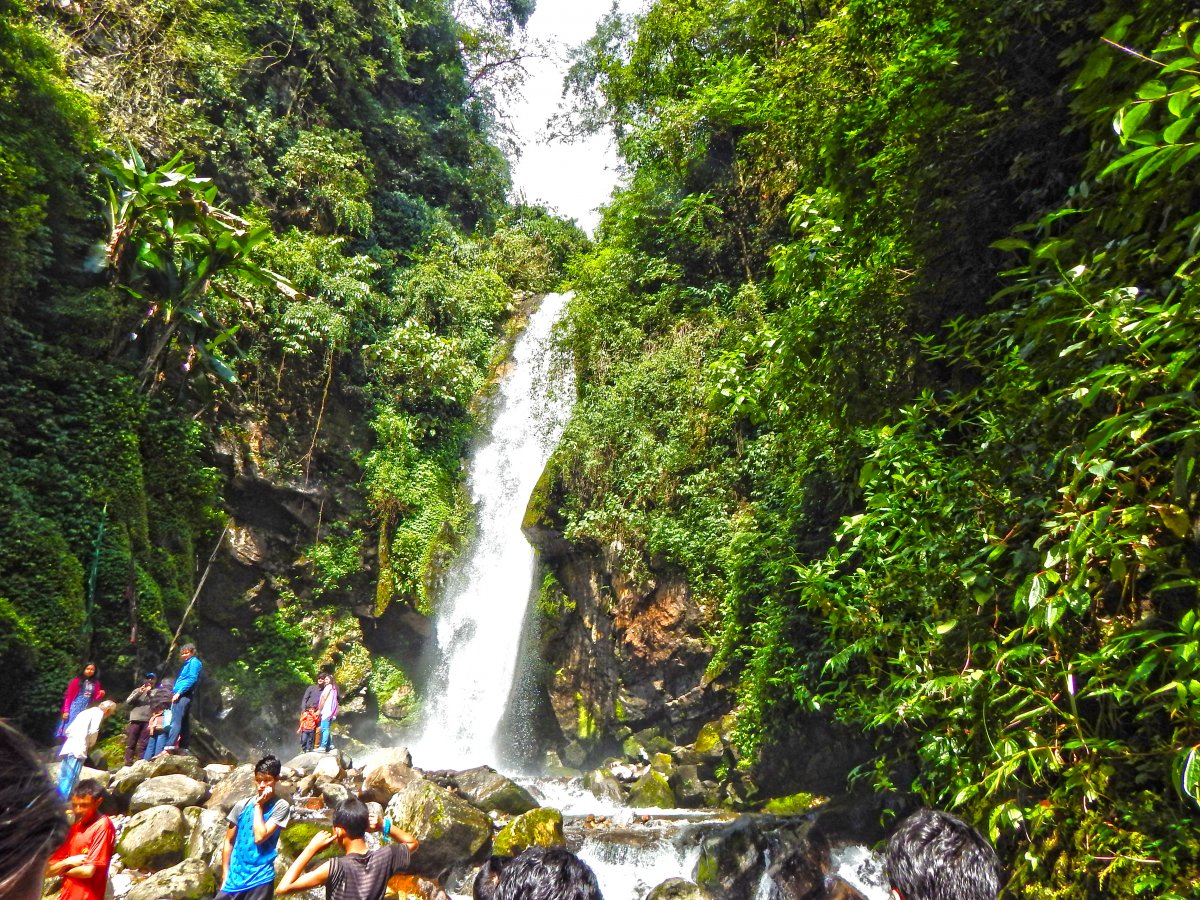 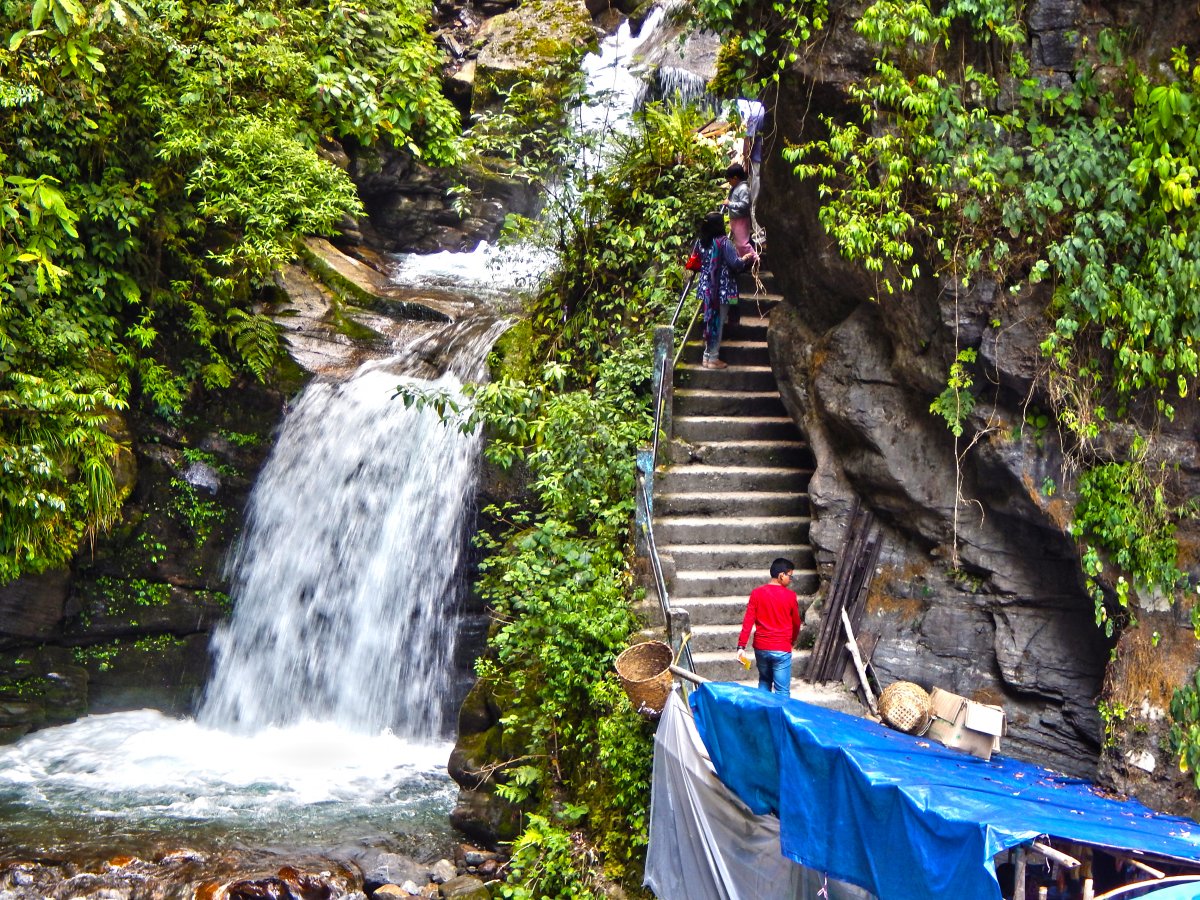 After Kanchenjunga Falls, we headed for the coronation throne in Yuksom. It was the birthplace of Sikkim. It is the place where the first chief of Sikkim was crowned. It is a very important place for worshiping for the local people of Sikkim. It is a very quiet place and very well maintained. There were lot of benches there, we sat on the benches and enjoyed the solitude unlike our experience near the Kanchenjunga falls. We roamed around the place, took a few snaps. 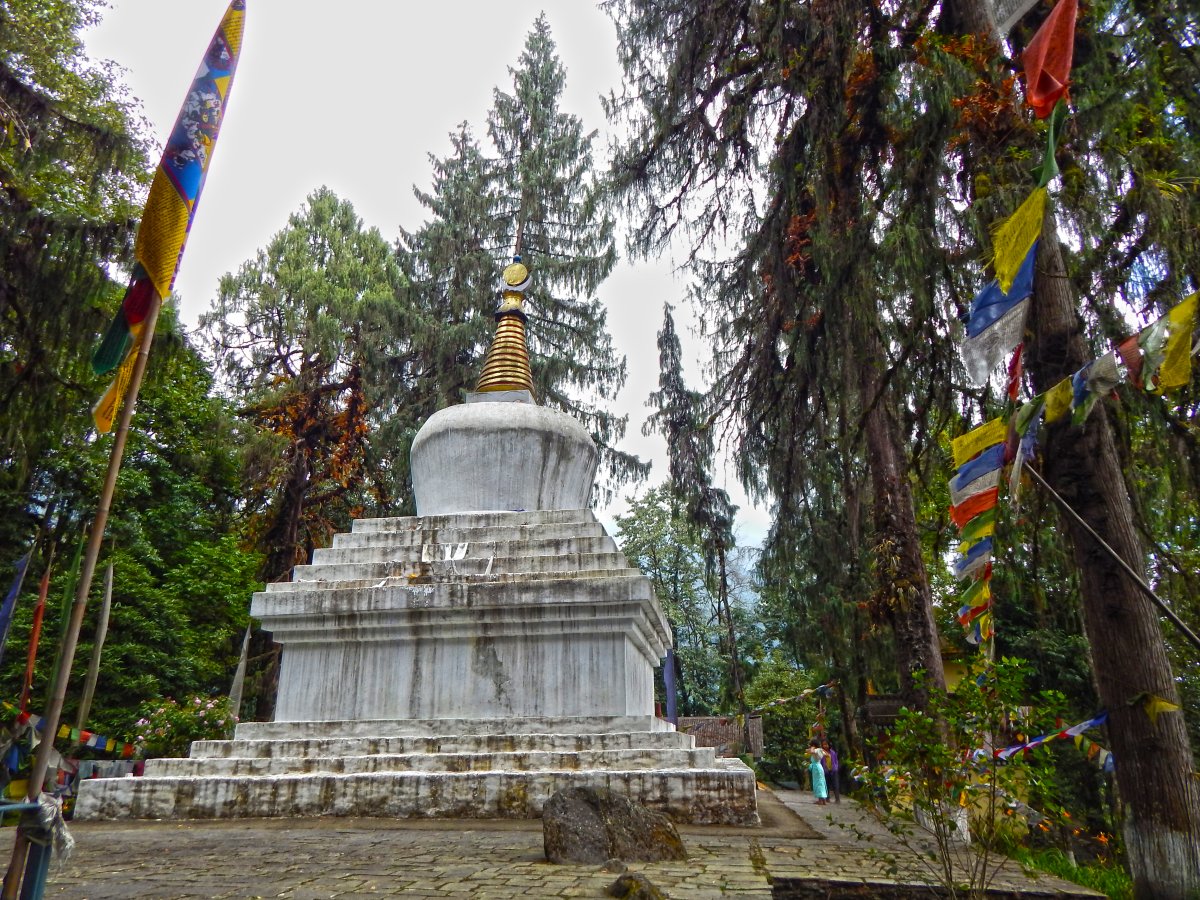 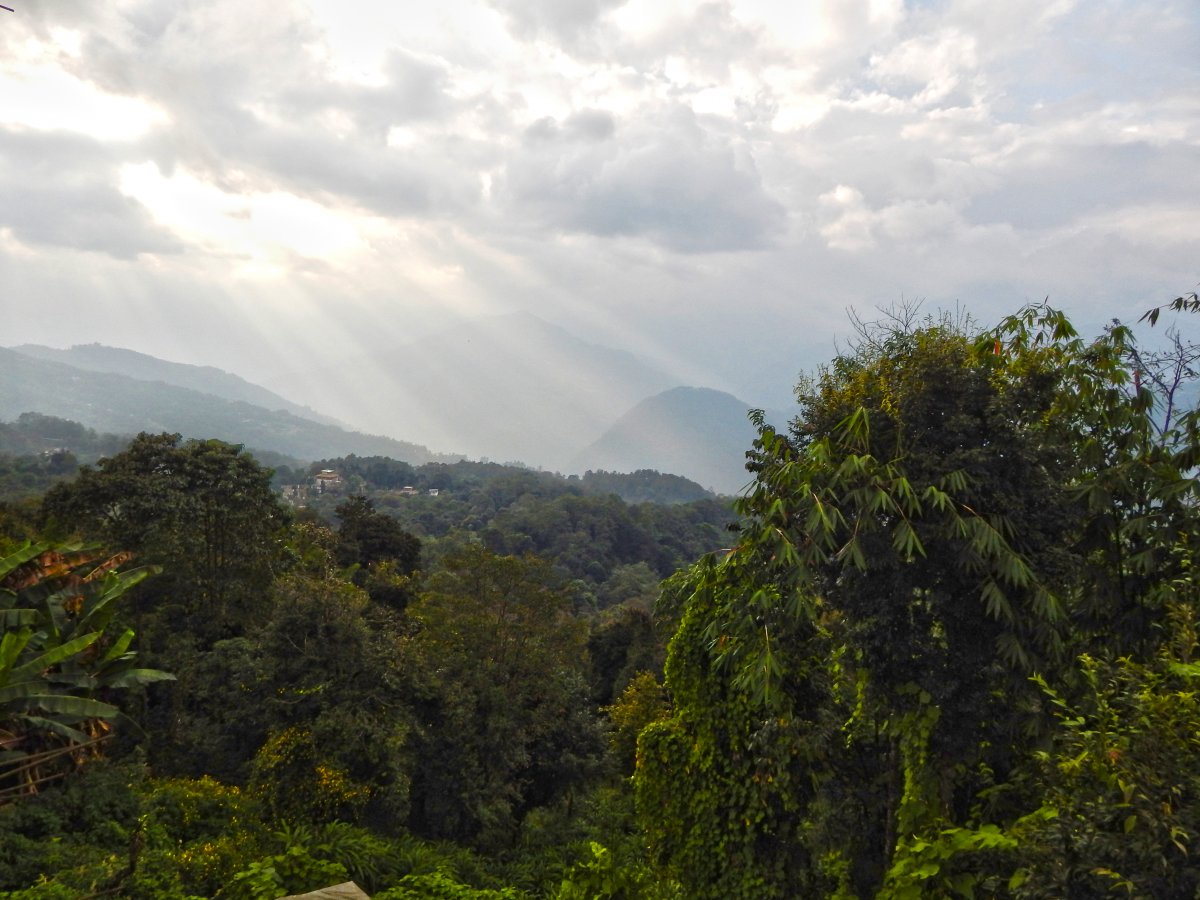 And then headed for our final destination of the day Buddha Park, Ravangla. In between we felt very hungry as we didn’t had a proper breakfast. So, our driver stopped near a restaurant and we had our lunch. The food tasted a little different from what we had in Pelling. It was more like boiled stuff. So, naturally most of us just gulped down the food and got into the car as fast as possible.

The journey was pretty uneventful, except once our driver took a wrong turn and then we moved quite a bit, away from the Buddha park and somehow he realised that and turned back the car. He said sorry to us for that, but we were not complaining as the views were just fantastic. After about 2 hours from our lunch, we reached Ravangla. And then we crossed the town and headed towards Buddha Park also known as Tathagata Tsal. It was constructed between 2006 and 2013 and was inaugurated by the 14th Dalai Lama. The centerpiece of the park is a 130 foot high statue of Buddha. It is constructed within a very large area and also features a large auditorium for prayers. 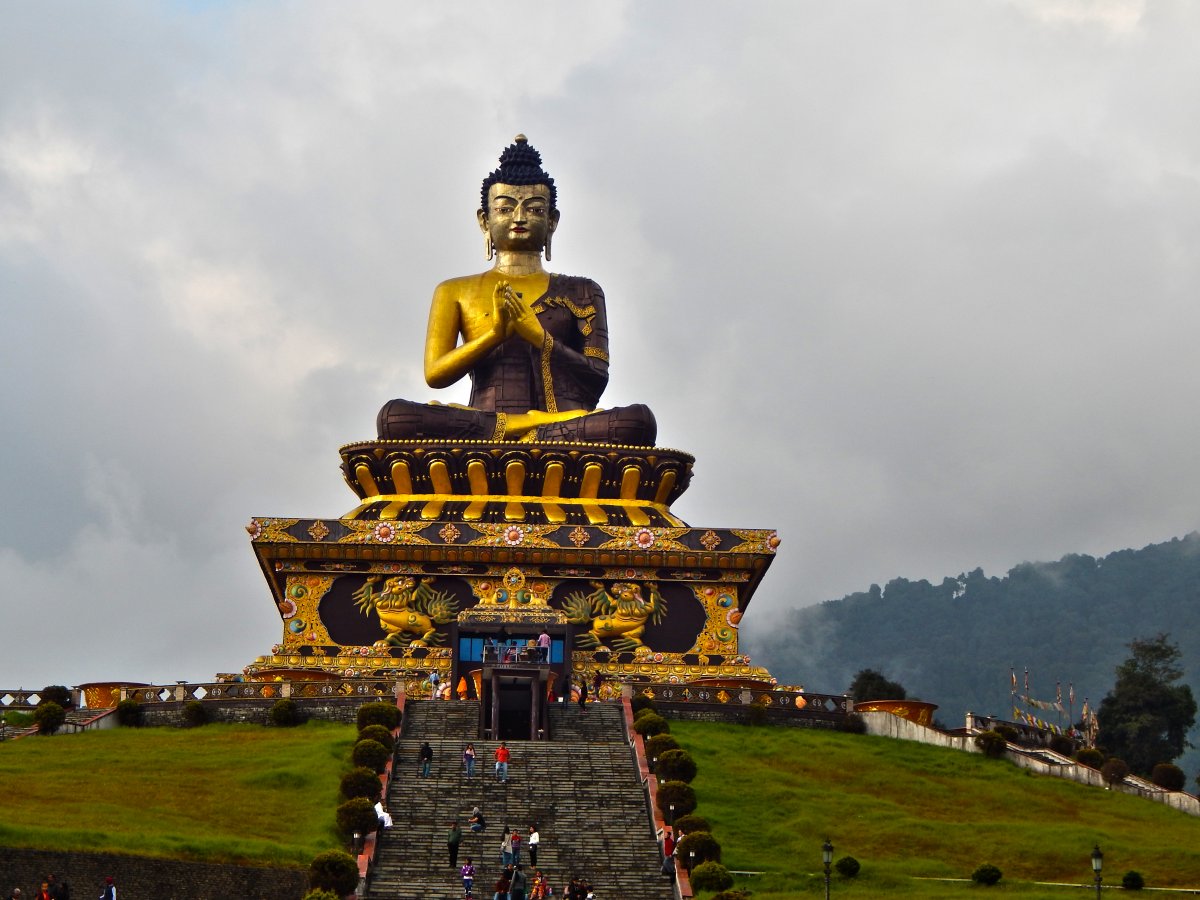 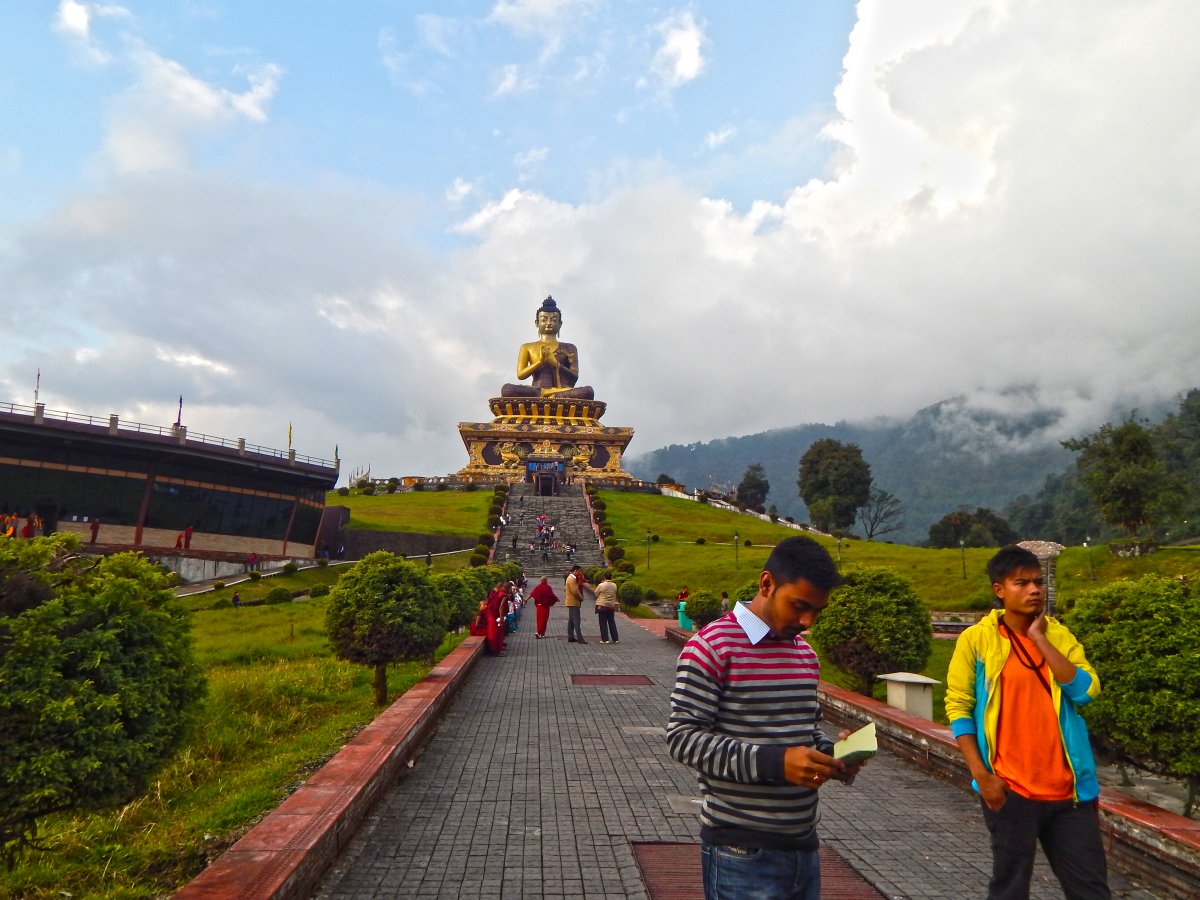 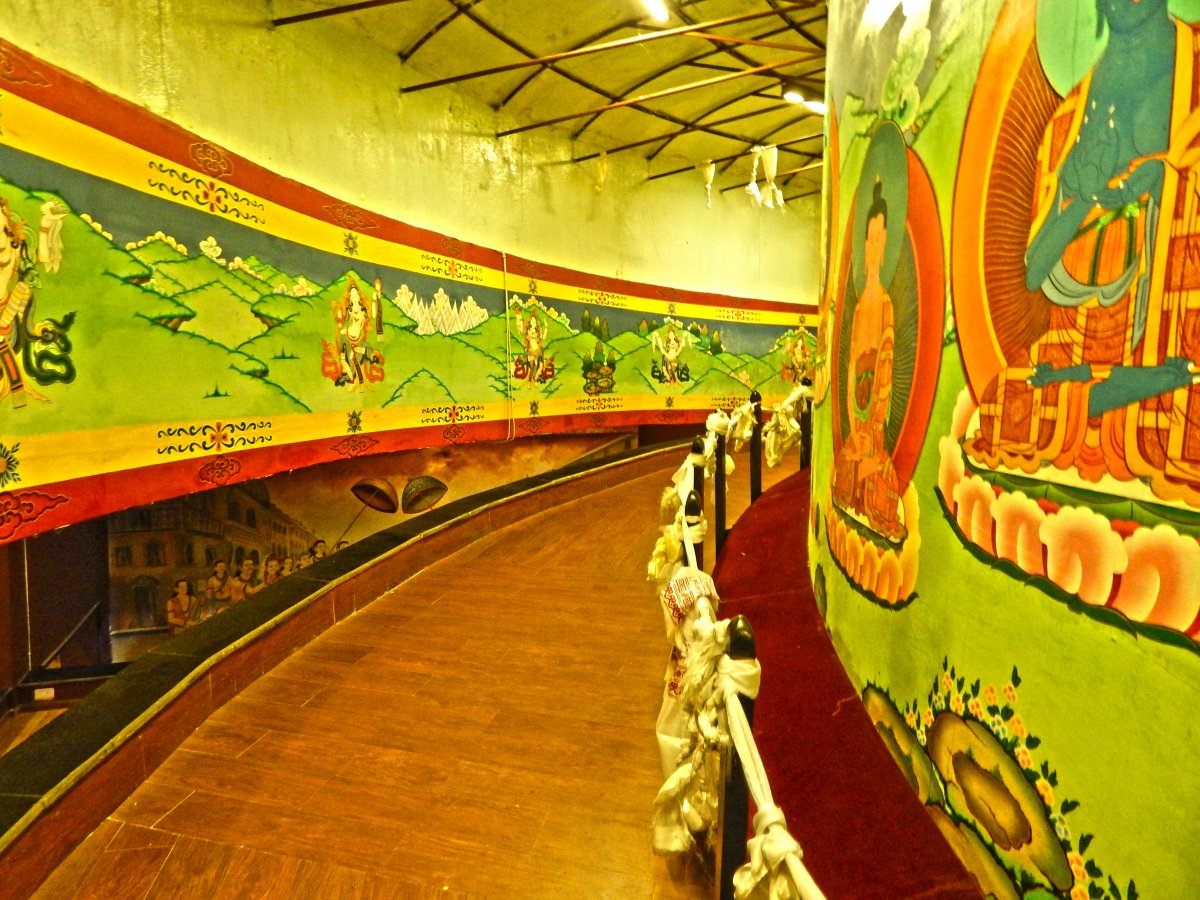 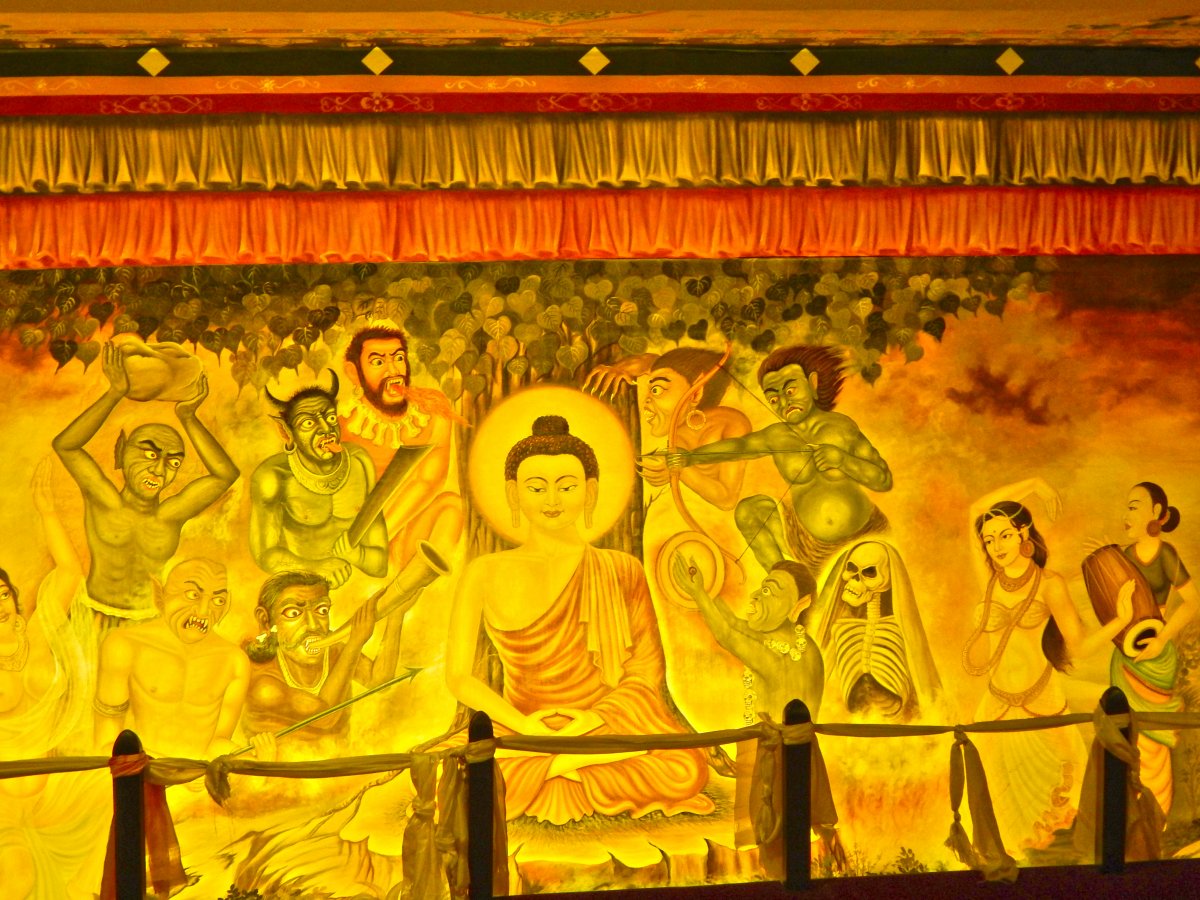 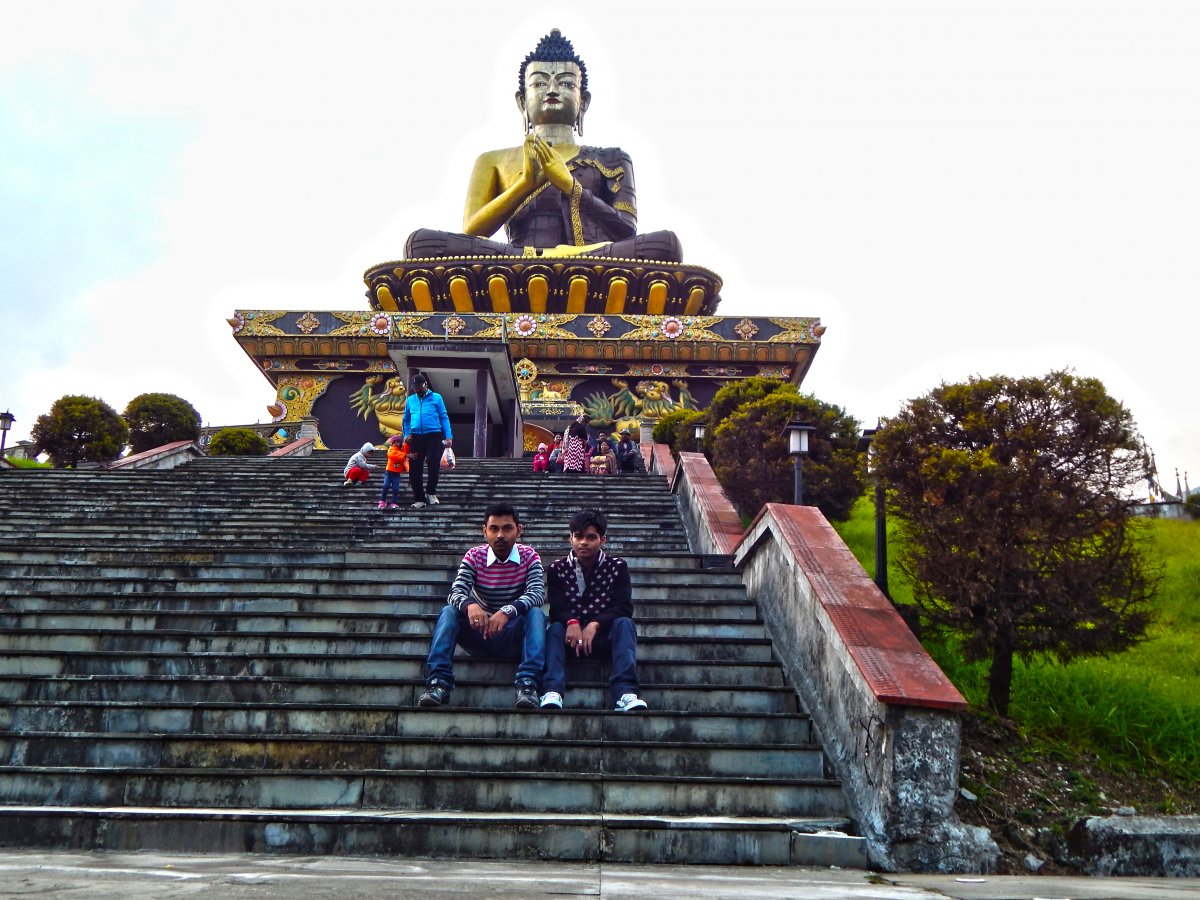 After spending considerable amount amount of time and after numerous selfies and photo shoots we decided to move to our hotel in Ravangla as it was getting dark. The hotel was of 5 mins distance from the Buddha park. In the meantime all the lights of the park were switched on and it was a magnificent sight to look at. Wish if I could have spent a little more time there, but hey there is always a next time right

After checking and settling our luggage down into our rooms. We, cousins, decided to take a tour of the Ravangla town. After walking for about 12 - 15 mins, we reached the town. The town is very small, there is a road of about a km, besides which all the shops are built. Most of the shops are owned by non-sikkimese people. They are mostly from the plains. We roamed around and found a few sweet shops. The gulab jamuns were just divine, out of the world. I have to admit those were even better than the ones we have back home.

After our little excursion, out in the town, we came back to our hotel, the ladies watched the usual soap operas and the rest lessened their internet balance on their mobile phones At 8:00 we got a call from the reception that our dinner is ready, we went down to the dining hall for our dinner, it was a simple veg meal. After dinner went to our rooms, watched some movie on my phone and called it quits for the day. Today, was comparatively a very bland day for me for sightseeing. I did not click many photos as it was an overcast day, some of the places also were not to my liking. Well hoping for a good start tomorrow.
Har har mahadev