Onigiri
From Wikipedia, the free encyclopedia
O-nigiri(お握り or 御握り; おにぎり?), also known as o-musubi(お結び; おむすび?), nigirimeshi(握り飯; にぎりめし?) or rice ball, is a Japanese food made from white rice formed into triangular or cylinder shapes and often wrapped in nori (seaweed). Traditionally, an onigiri is filled with pickled ume (umeboshi), salted salmon, katsuobushi, kombu, tarako, or any other salty or sour ingredient as a natural preservative. Because of the popularity of onigiri in Japan, most convenience stores stock their onigiri with various fillings and flavors. There are even specialized shops which only sell onigiri to take out. Due to its popularity in Japan, the trend of small restaurants selling onigiri has traveled to the American West coast, specifically California. 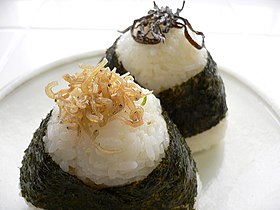 Overview:
Despite common misconceptions, onigiri is not a form of sushi. Onigiri is made with plain rice (sometimes lightly salted), while sushi is made of rice with vinegar, sugar and salt.[1]Onigiri makes rice portable and easy to eat as well as preserving it, while sushi originated as a way of preserving fish.


History:
n Lady Murasaki's 11th-century diary Murasaki Shikibu Nikki, she writes of people eating rice balls.[2][3] At that time, onigiri were calledtonjiki and often consumed at outdoor picnic lunches.[4] Other writings, dating back as far as the seventeenth century, state that many samurai stored rice balls wrapped inbamboo sheath as a quick lunchtime meal during war, but the origins of onigiri are much earlier even than Lady Murasaki. Before the use of chopsticks became widespread, in the Nara period, rice was often rolled into a small ball so that it could be easily picked up. In the Heian period, rice was also made into small rectangular shapes known as tonjiki so that they could be piled onto a plate and easily eaten.

From the Kamakura period to the early Edo period, onigiri was used as a quick meal. This made sense as cooks simply had to think about making enough onigiri and did not have to concern themselves with serving. These onigiri were simply balls of rice flavored with salt. Nori did not become widely available until the Genroku era in the mid-Edo period, when the farming of nori and fashioning it into sheets became widespread.

Mass manufacturing
It was believed that onigiri could not be mass-produced as the hand-rolling technique was considered too difficult for a machine to replicate.[who?] In the 1980s, however, a machine that made triangular onigiri was devised. This was initially met with skepticism because, rather than having the filling traditionally rolled inside, the flavoring was simply put into a hole in the onigiri and the hole was hidden by nori. Since the onigiri made by this machine came with nori already applied to the rice ball, over time the nori became unpleasantly moist and sticky, clinging to the rice.

A packaging improvement allowed the nori to be stored separately from the rice. Before eating, the diner could open the packet of nori and wrap the onigiri. The limitation of the machines that required using a hole for filling the onigiri (instead of rolling the filling with the rice) made new flavors of onigiri easier to produce as this cooking process did not require changes from ingredient to ingredient. Modern mechanically wrapped onigiri are specially folded so that the plastic wrapping is between the nori and rice to act as a moisture barrier. When the packaging is pulled open at both ends, the nori and rice come into contact.

Fillings:
Umeboshi, okaka, or tsukudani have long been frequently used as fillings for onigiri. Generally, onigiri made with pre-seasoned rice (see above) is not filled with ingredients.

Typical fillings are listed below.

Wonderful information @adsatinder paaji. I didn't know about the history of Onigiri. Thanks for sharing.


Welcome to City of Lights
​


I reached Tokyo quite late last night. My bus from Kawaguchiko dropped me near Tokyo train station. My first impression about Tokyo was really pleasing. City is full of neon lights , sky rise buildings, shopping malls, smartly dressed people and everyone was busy in their cell phone with ear plugs on. I felt at home
​


I had no difficulty in finding vegetarian food and reaching my Cube hotel for the day (More on my hotel later). I just crashed for the day after having a hearty meal at a Nepalese restaurant serving Indian food.
​


By now, you could have guessed what I will have for breakfast. Yes, that’s right. Granola with some hot water as it has been for all of my days in Japan. My plan for the day was to explore shrines and local market of northern part of Tokyo. I had nearly four days in Tokyo with little places to see so I wanted to take it easy. That’s what i always plan but never do! I took my day bag with camera, tripod and some snacks with me and left my main bag in cube itself. Everyone says hotels in Japan are safe. Anyways I had no valuables in my backpack.
​


My hotel last night (I eventually stayed in same hotel all nights in Tokyo) was near to Sensoji temple and I could walk to the temple in twenty minutes passing along local shops. Area around Asakusa is historic and still maintained in its old form. Sensoji temple is main attraction in Asakusa district. Kaminari gate is officially the entry point of Sensoji Temple. Gate was built 1000 years ago and is a symbol of Asakusa. After spending some time reading about history of Asakusa, I went towards Sensoji temple crossing Nakamise street. Street is lined with over 50 shops selling local food and souvenirs. Street was buzzing with locals and tourists alike. I finalized a few souvenirs for buying, perhaps on my last day in Tokyo.
​


Sensoji is a Buddhist temple located on the banks of Sumida river. It is also the oldest temple of Tokyo. Sensoji Temple is a few steps from Asakusa Station, served by the Ginza Subway Line, Asakusa Subway Line and Tobu Railways. As expected, it was pretty crowded. Sensoji temple is on everyone’s list so its always crowded. A five storied pagoda stands tall near Main hall of the temple. Main hall is characterized by exquisite wall and roof art work.
​

A large lantern at entrance
​

Perhaps a saint or worshiper outside main hall.
​

A guided tour on a rickshaw is a good choice to explore Asakusa (jinrikisha, literally “man powered vehicle”). A 30 minute tour for two persons costs around 9000 yen. Shorter and longer courses are also available.
​


I could still see a few blooming cherry trees in temple complex although official blossom period was over in Tokyo. I have had my share of cherry blossom in Kyoto already. I spent the day strolling around Asakusa area and along Sumida river. I was loving Tokyo more than I anticipated. I had a late lunch in a Indian restaurant “Curry Dish” near to Sensoji temple. As a surprise, restaurant was not being run by India chefs. Naan and Dalmakhni were okay but they had nice Onion salad.
​


I liked the uniquely designed ferries in river and decided to ride it next day as today it was late to venture out somewhere else. I spent the walking along the old Tokyo streets and talking t occasional English speaking tourists. I will leave you with some night shots of the temples. I will share about my Cube hotel experience in next post.
​

Tokyo Skytree, is on other side of Sumida River
​

A few remaining (blooming) Cherry trees in Tokyo. This one is right next to ferry pier.
​

Sun set along the city streets
​

I went to Japan a few years ago. The country is very technologically advanced. I went to Tokyo, Kyoto, Kobe, Hiroshima and Osaka. Asahi and/with Okonomayaki are a must have in Japan.

Little late to catch up. Perhaps the best TLOG which i had come so far on this site. Beautiful pictures, as some one already mentioned despite the dull weather conditions you just did the magical thing through your lens. Thumbs up!
K

Ankur, sorry about the delay in response to your mega logue.
I am so glad that you had the perseverance to post all the details and pics. BTW the quality of both are marvelous, however the pics are slightly ahead of the prose

Keep up the good work.

Thanks for your continuous support Paaji.

Thanks Bam Bam. I am glad you liked the pictures.


VisheshS-RE said:
I went to Japan a few years ago. The country is very technologically advanced. I went to Tokyo, Kyoto, Kobe, Hiroshima and Osaka. Asahi and/with Okonomayaki are a must have in Japan.
Click to expand...

Hi Vishesh, I agree. Japan is very technologically advanced. They believe in using technology in day today lives. Even petty household things are automatic or electronics driven. Weather in April was a bit cold to dive into Asahi but I loved it!


svamshi said:
Little late to catch up. Perhaps the best TLOG which i had come so far on this site. Beautiful pictures, as some one already mentioned despite the dull weather conditions you just did the magical thing through your lens. Thumbs up!
Click to expand...

Thanks for kind word Vamshi. Weather and (thus) photographs are bound to get better now. A lot more days to come.


kdacharya said:
Ankur, sorry about the delay in response to your mega logue.
I am so glad that you had the perseverance to post all the details and pics. BTW the quality of both are marvelous, however the pics are slightly ahead of the prose