Solo Ride to Nilgiris. Myself and RE Thunderbird.

Journeys are measured not in distance but in Memories.

I never knew I had that travel keeda inside me until I came back from last sailing in sea and found myself lost in the chaos of landlubbers.
Well, I'm a Merchant Navy Officer. and the travel keeda who was till now cocooned; just breathed its first solo travel.
Bangalore to Ooty via Mysore. 600 Kms of solo riding on my only companion, RE Thunderbird 350.

The hardest part of this trip was to convince my parents to allow me to go solo on this ride. For them its sheer foolishness to Ride a bike, just for sake of Riding.
Since my father owned a Splendour, that too a couple of years back, I never had an experience of handling an above 125cc beauty. I was a bit nervous that would it be possible to handle 350 cc giant that too on hilly terrain.

Challenge makes us strong and I embraced one with open arms.

So on 2nd September, the journey began. Took this train from my hometown Gorakhpur for Bangalore. A 47 hrs of train travel would have juiced any normal person. But for me with every passing moment, the thrill and excitement were on high.
Fortune favors the Bold. Getting upgraded to 1AC from 3AC class for such a long train travel was a cherry on the cake. 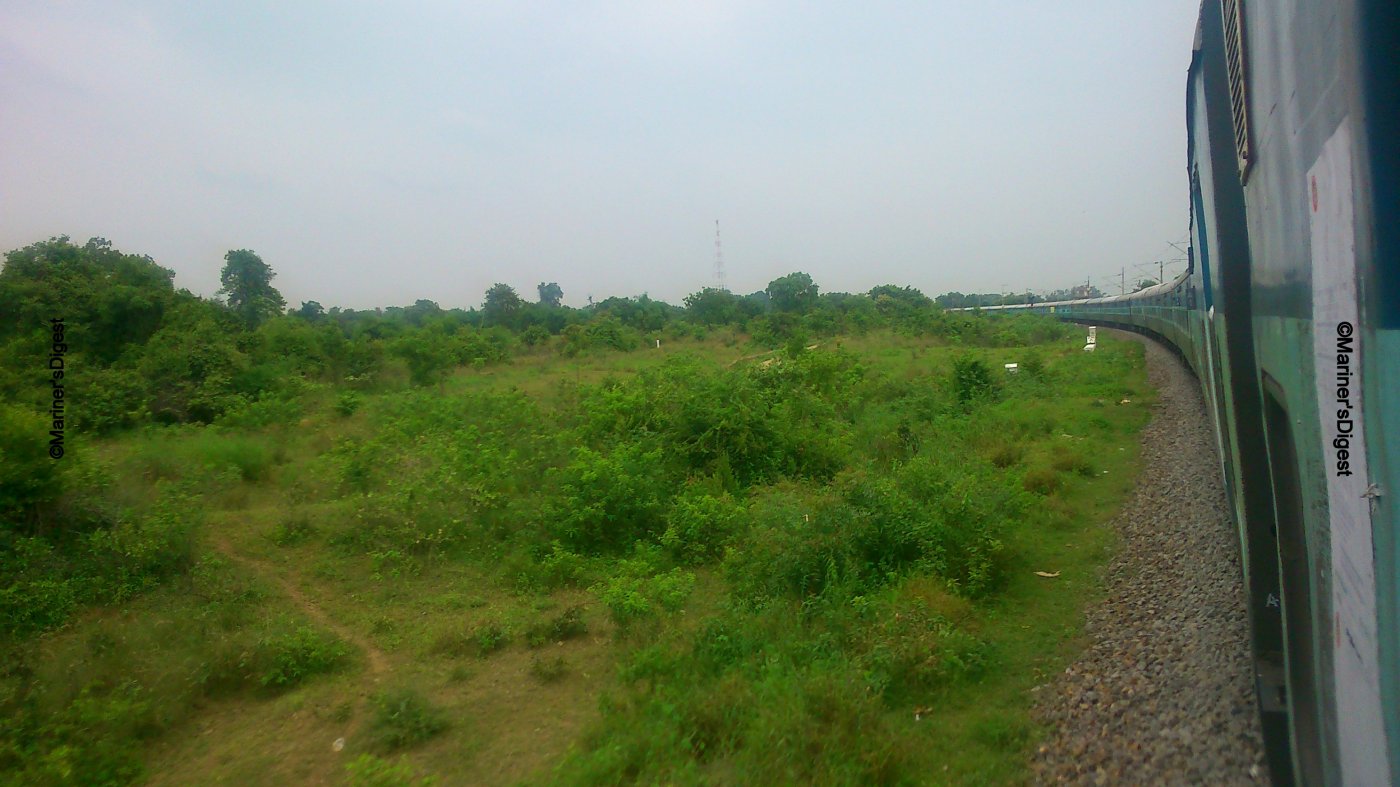 On 4th Sept, reached Bangalore, the city I desperately awaited, since I was about to get a glimpse of my Princess. (P.S. - During this trip, I literally fell in Love with my Bike.. For me she is more than a set of machine and metal.. For, She is my Princess...)
Train arrived a bit late at Yeshvantapur Jn. It was not practical to get the bike, since I was to move to the hotel for check in. So decided to wait for next sunrise.

5th September (Day 1) : Got up early. Had already packed my bags for the trip. This was my first bike trip, that too solo, So I packed myself with even the minutest of details. (I had even spent few days in the workshop of RE, in my hometown, to get to know the basic troubleshooting )
At around 11 AM picked the bike at Indranagar. Believe me, this was one of the best day of my life to see her waiting for me. 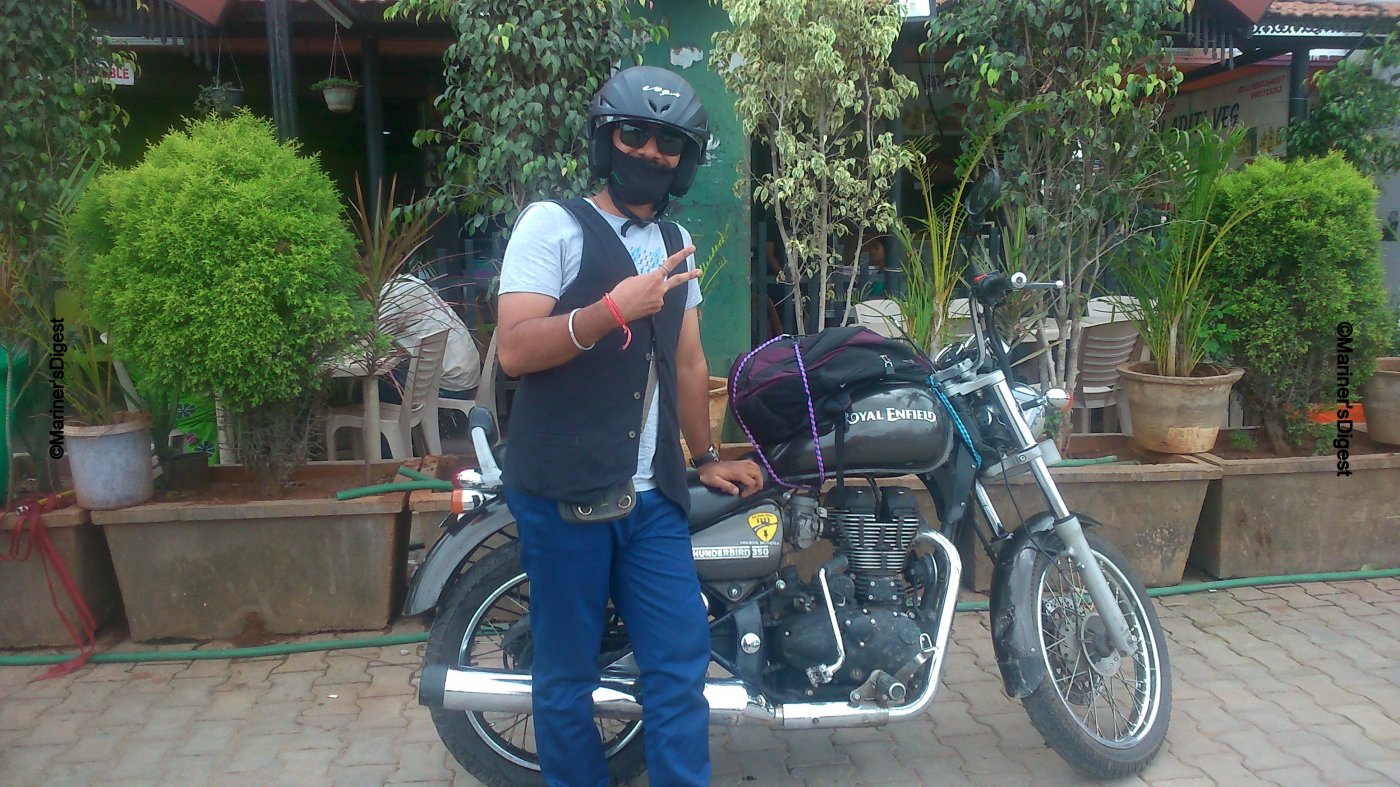 12 noon, I was ready to depart on the life changing journey.
Planned to halt at Mysore en route and start for Ooty only the next day early morning. It's around 150 kms to Mysore from Bangalore and so I was having much time in hand to reach Mysore by 2000 hrs.
The ride from Bangalore to Mysore went like a breeze. Mysore road was good to ride on. Since time was not a constraint at all; made many pitstops to keep refuelling myself with southern delicacies. After a smooth ride of 150+ kilometres, I reached Mysore at around 1700 hrs. The next important task was to locate a hotel or guest house or anything where I could take the day off. After 2 hours. of soul searching sorted out a guest house. Tried my bargaining skill and got a room at just Rs. 500. “VOILA”. Checked in the room but was in no mood to hit the bed, the travel keeda was pushing to explore Mysore. At around 2000 hrs. exploration in this vintage yet, unknown to me, city began. Luckily, Mysore Palace was only 10 mins. away on bike from the Guest House. Without any second thought headed straight to the palace. Well, luck won’t play good always. Found Mysore Palace closed for the day.
Well, the princess first visited the Palace. It was worth Picturing. 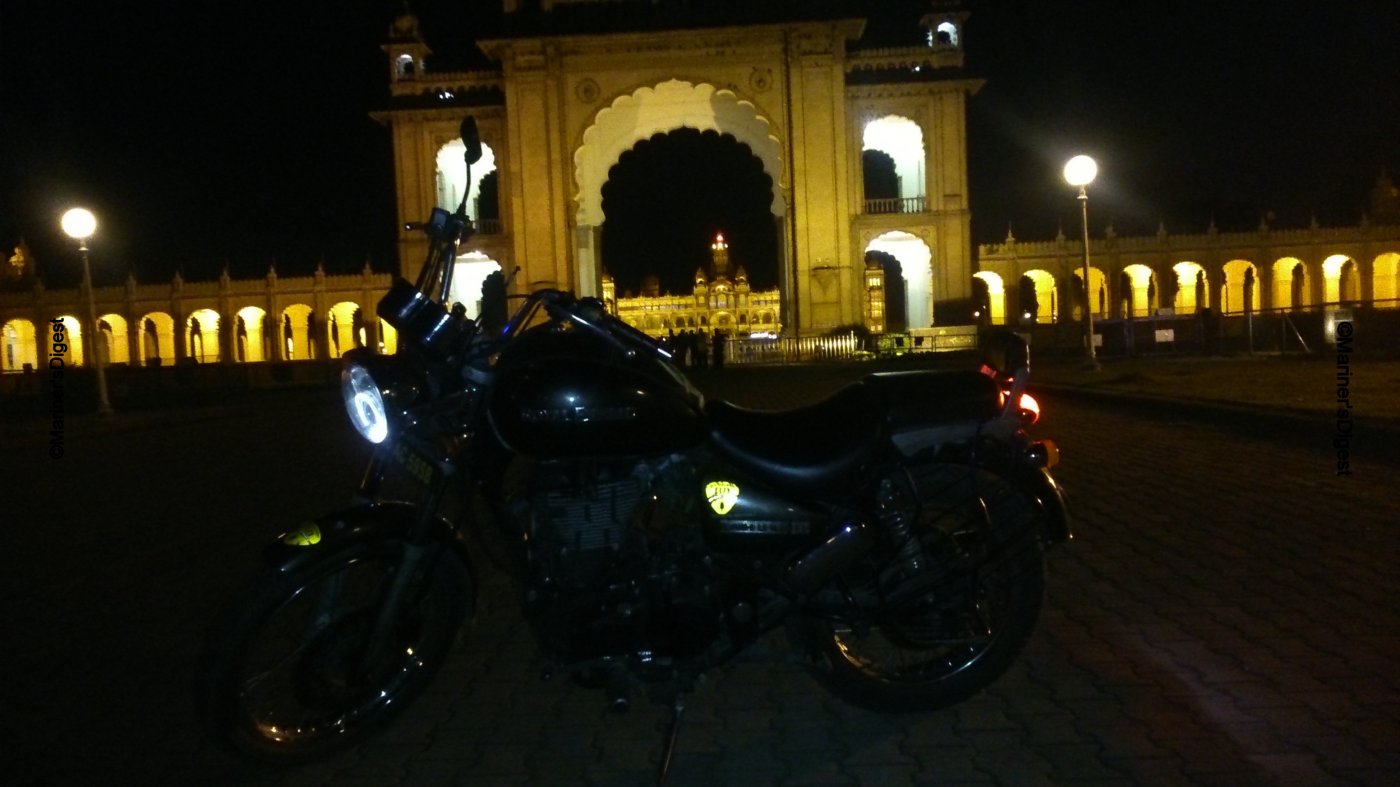 Unlike, the bustling cities of north India, Mysore is a comparatively calm city. At 2100 hrs. found almost all shops had downed there shutters and it was a bit difficult to locate a vegetarian restaurant. Haha, Found one just beside the guest house, I stayed.

Day 2 : Planned to leave hotel by 0600 hrs. but missed the alarm. Left Guest House at 1000 hrs. Before leaving Mysore city, topped up the tank, and bought a basic first aid kit as the road ahead was hilly, where I was riding for the first time.

The excitement to enter Bandipur Reserve area were on its peak. The thrill of traversing the reserve forest area alone evaporated on spotting a herd of elepants. Believe me, no one was behind me nor ahead of me, in this vast expanse of jungle as far as I could see. It was only me and these elephants. Life doesn’t come in chance, and I took a chance. Instead of quickly passing by those bigheads, Pulled over the bike to roadside. And took a snap of the Gajrajs. I had no idea what I would have done, If they would have charged on me. Next time if any such idea comes to my mind, someone pls punch me on my face.
Well, the best part of story was that the herd didn’t give a f**k about me, my bike or my anything. They were lost among themselves. 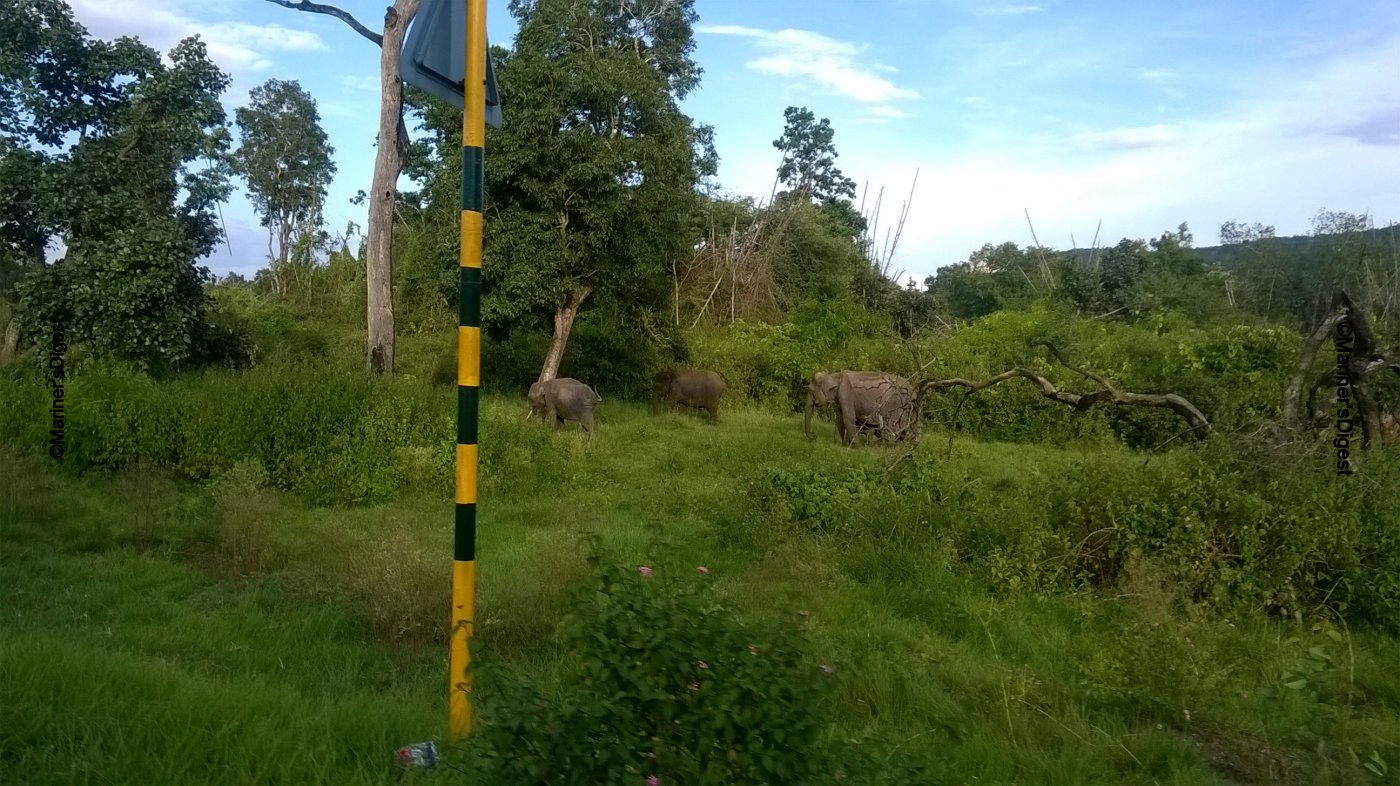 The ride through Bandipur and Madumalai Reserve area went very well. The frequent speed-breakers all across the forest area did gave a pain in ass.
On finishing the reserve area, and getting the first glimpse of mighty Nilgiris, I felt completely lost and mesmerized by the beauty of it. It’s very rightly named, The Queen of Hills. A few hours of further ride ahead and the trail through the hair pin bends which I, till then, dreamed of were traversed. Riding through the hilly terrains and making frequent stops to admire the beauty of the nature, was the best part of this trip. 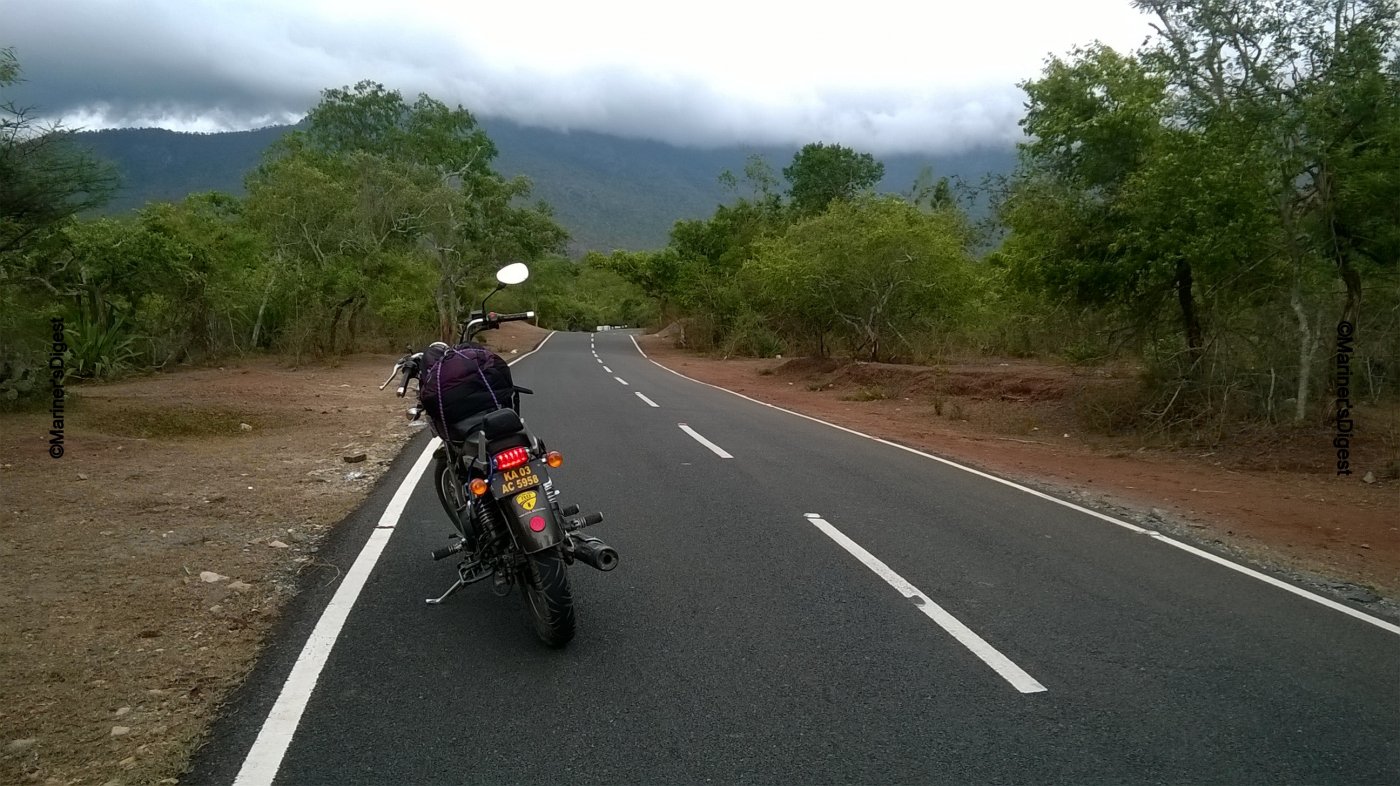 On reaching Ooty, the first thing to look for was a warm and cosy place, preferably a cottage, to make an overnight stay. Quickly, found one with help of a local guide. The view from cottage was extremely beautiful. I chose the cottage away from the main Ooty market, at quite a peaceful location. It was in a residential area, and the building was literally built on a steep cliff, overlooking, the tea gardens.
In Ooty, my plan was not to visit any tourist spot, but to explore the city’s offbeat locations.
Day 3 : After a good night sleep at cottage, early morning at 0500 hrs. started the Ooty exploration. The first place was Lovedale Railway Station. The road leading to the spot was just lovely, those beautiful views, again pushes me to visit the spot. 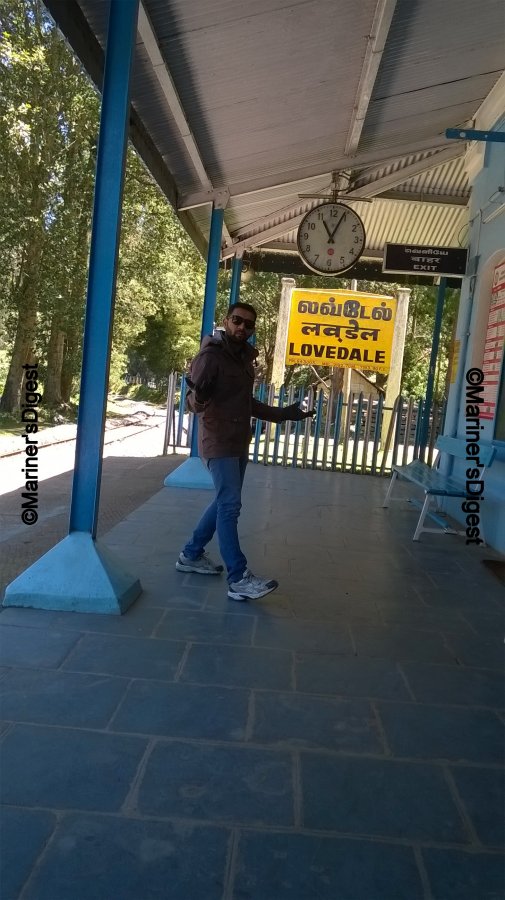 St. Stephens church, was the next point of interest. After spending about half an hour in church and admiring the minutest of the details of the architecture, started for the Dodabetta peak. I found the peak itself a bit crowded with tourists. But the way leading to it, specially through the Reserve forest area and the road overlooking the Tea Museum, were the places I wish to visit again. 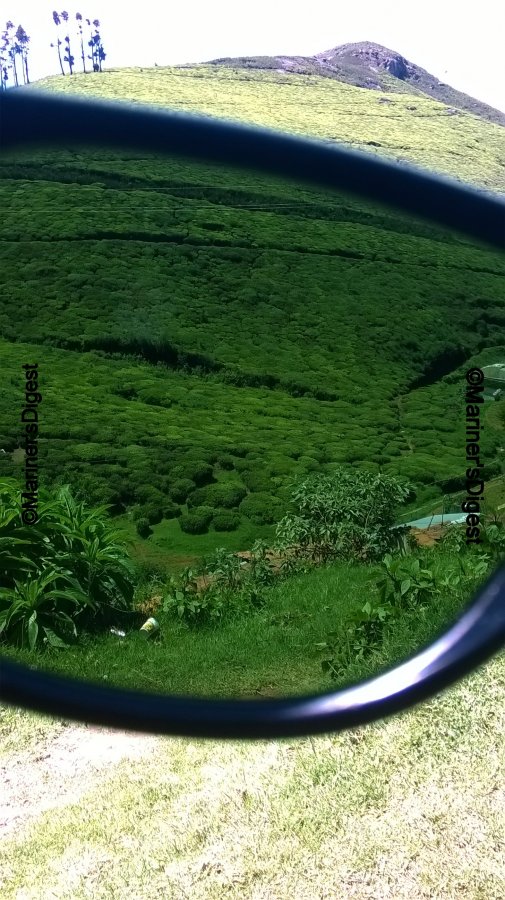 Being a mariner, where I get a chance to visit different parts of globe, I have made a habit of buying a memoir from every place I visit. These memoirs help me to reconnect myself to the places I had already visited, whenever I chance to look upon them in my closet. For every journey has a story and I was a part of the story. So, a bit of shopping and bagging a few memories, I was ready to depart on return leg of the journey.

This time chose the route through Pykara dam as it was in my bucketlist. The roads were in good condition, only I didn’t get those hair pin bends, except a few sharp turns. Made a stop at one of the pine tree estate. 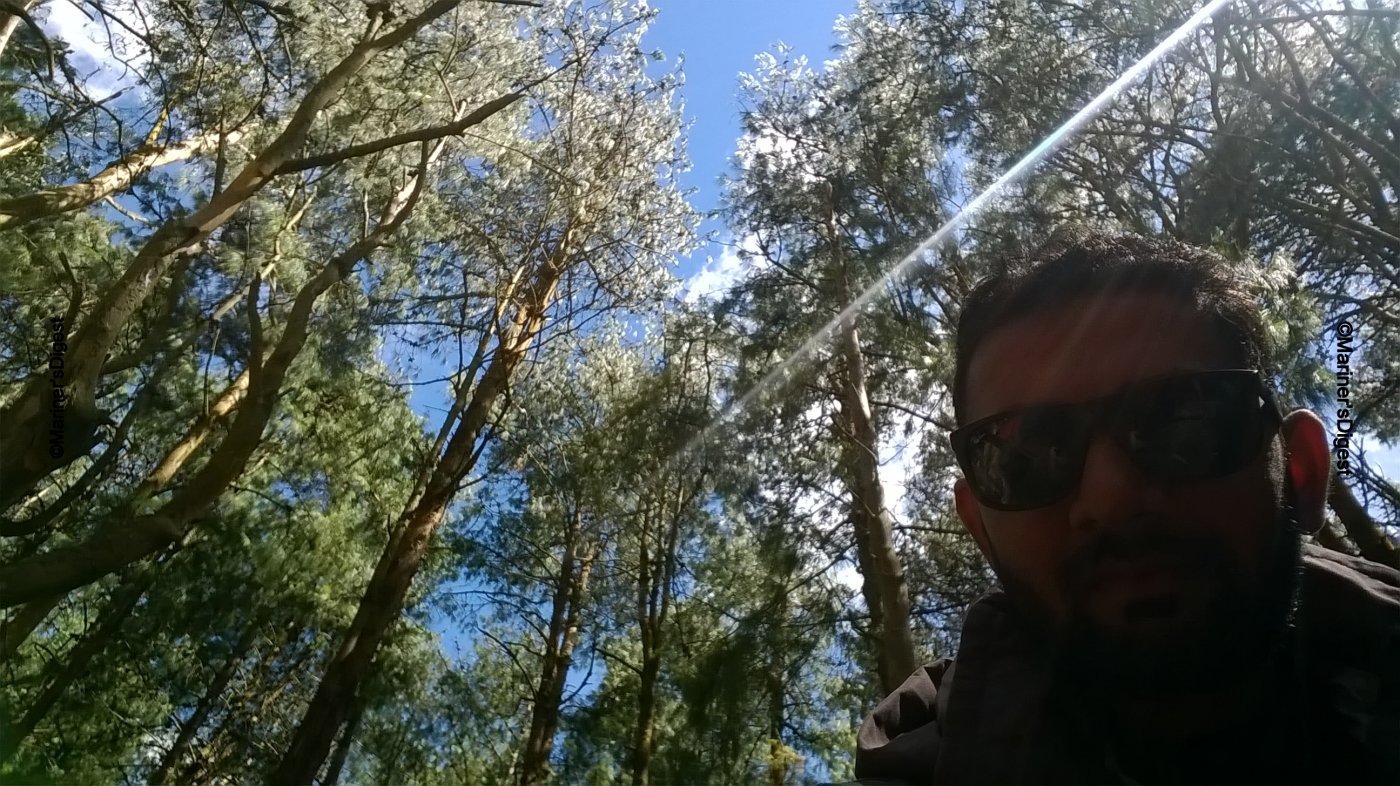 The watch had already stuck 1500 hrs. and it was still an hour to enter Reserve Forest area. I was in no mood to make any halt before Mysore, lest I clear the reserve area before 1730 hrs.. Well, I needed to speed up. Crossed the reserve area just in time at around 1700Hrs.
While enroute to Bangalore, made a night halt in Mysore as I was yet to visit Mysore Palace, which was missed earlier. Reached Mysore in evening, and without any second thoughts, went straight to the guest house, I had stayed while the first leg of the trip. A warm dinner, followed with a hot, steaming tomato soup, helped me to quickly loose myself in dreams.
Day 4 : Woke up a bit late at 0900 hrs. as I was in no mood to roam in Mysore city and ruin the peace and serene images of ooty, I was carrying in my mind. But, The Mysore Palace, was still to be ticked off in my bucketlist. Visited The Palace, took some pics and admired the royalty and lavishness, that were offered to the Royal Family. 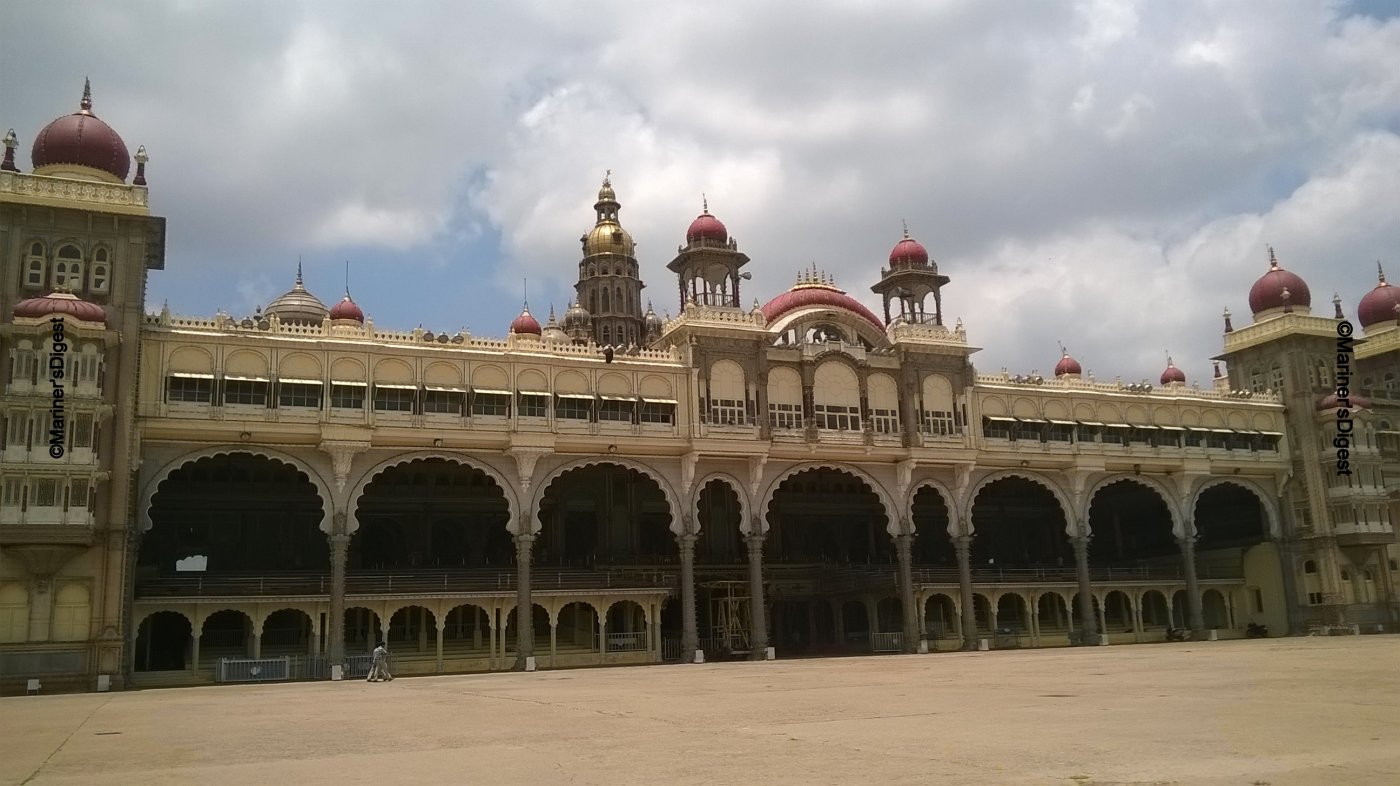 At around 0200 PM left from Mysore to start for Bangalore. Reached Bangalore at night around 8 PM. A good sleep was the only thing I wished upon on reaching.
It was not the destination I was looking for in this entire journey. It was the distance, I crave to cover again.
With lifetime memories to cherish upon, I had just finished my first solo ride. Looking upon yet another trip soon.
P.S. The pics shown bears the copyright of my own blog Mariner'sDigest. For more pics click here.

Hi
Now only i visited your Page, Which is very Nice, I am planning a solo bike ride from Coimbatore to Mysore via Sathyamangalam & return via Mudhumalai, Ooty, Mettupalayam on 13/01/2017
Can you please suggest me a Hotel in Mysore for peaceful stay...
You must log in or register to reply here.
Share:
Facebook Twitter Reddit Pinterest WhatsApp Email
Top