Streams, Stones and Showers : An unusual trek to Hampta Pass

PS : Should I move the thread to "Trekking Logs" section? Suits better there, if its Hamta pass trek report.
Click to expand...

Hi Ambuj, Yes, please move it there.. Am relatively new to BCMT, so was not aware about such section. Will come up with the next leg today..

Sorry for a long wait guys, got caught up on other fronts.. . So, here is the next leg:

It felt like I had left one of my body parts somewhere. Despite repeated checks amongst the arranged luggage, I couldn’t spot my Camera Bag.. Train had not started yet and it made sense to look for my bag at the platform where we had rested our luggage before boarding the train.

And there it was, lying untouched. That sight brought about a surge of Relief and Faith that will stay up with me throughout my life. And also, a lesson to never to rest that bag off my shoulders. Some things should not be let off you.. 

Nevertheless, all that begins well will end well. We thanked God and resumed our journey. Journeys in Indian trains are never eventless. Midst lot of chatter and box, and lots of questions by a guy fascinated with my camera we never realized how soon we reached Delhi!

Delhi, the city of contrasts. I fell in love with this city in 2010 when I had gone for a solo trip to Ladakh and had stayed in Delhi for 2 days. And ever since my love gets stronger every time I visit the Indian Capital. We met our friend Sandeep at Connaught palace. So finally, all six of us were now together.

I have never been sure, what I love about Delhi. The metro, the architectural haven, the appetizing food, the delicate streets where a short circuit can happen anytime. I call it a city of contrasts. May be there will be better adjectives but whenever I come out of Chandni Chowk Metro station, I realize a city cannot be more contrasting.

We had to catch a bus to Manali in the evening. We had a lot of time to explore and gallop. But not with our 55 liter rucksacks. 15th August being close, we had to get scanned thoroughly every time we entered or left a Metro Station. So, resting our bags at the bus agency’s office in Majnu ka Tilla, we spent our day in roaming about. Majnu ka Tilla Gurudwara, Chandani Chowk and a heavy super awesome lunch at KDH (Kakke Da Hotel), Connaught palace took most of the day. Not to mention a lot of Metro rides. 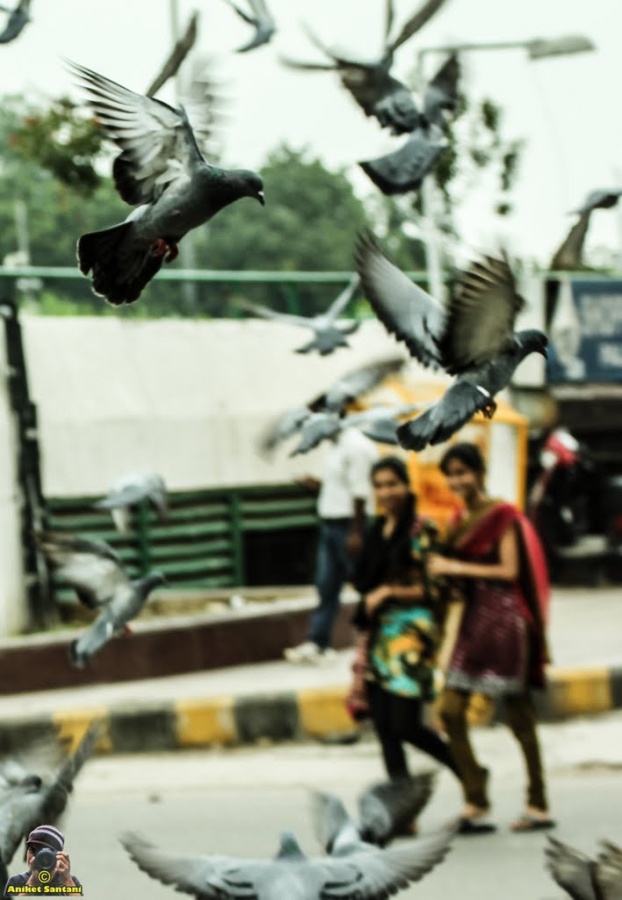 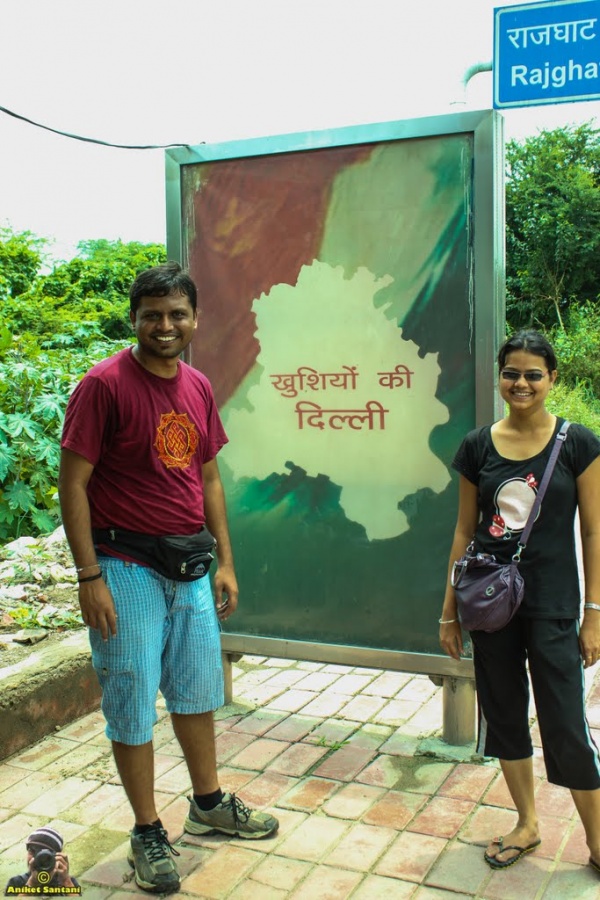 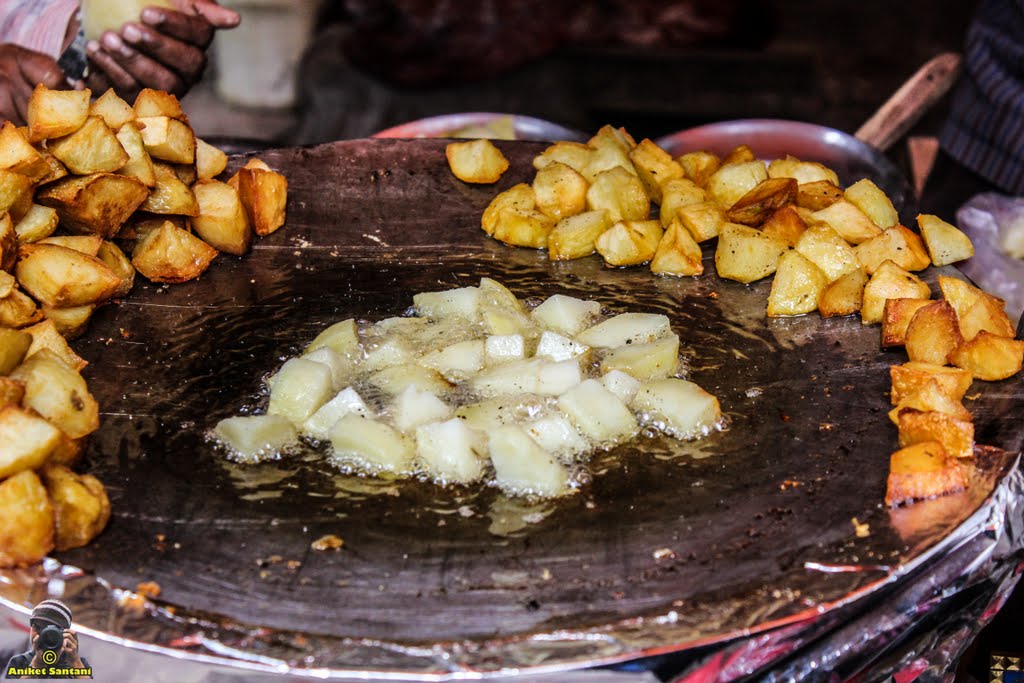 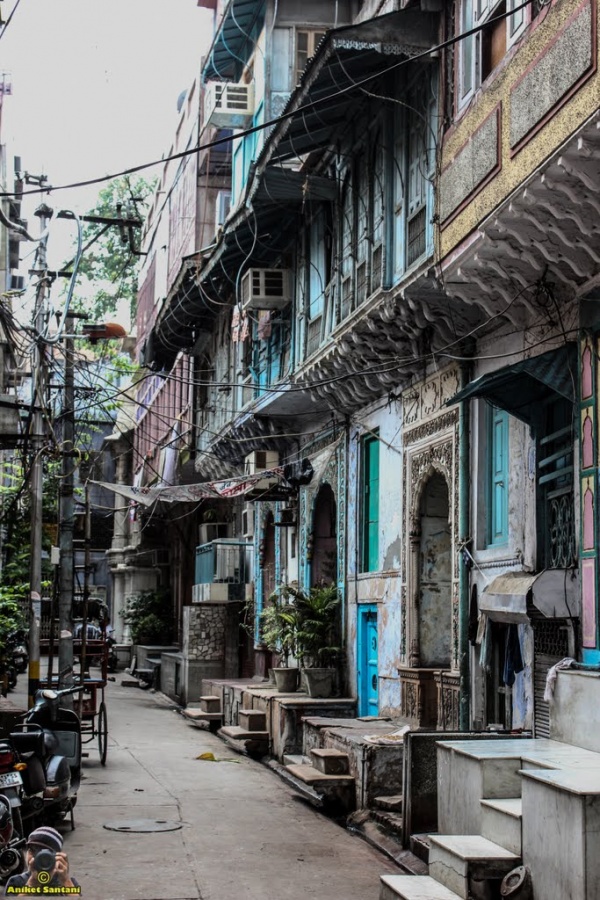 Some old residence in Chandni Chowk 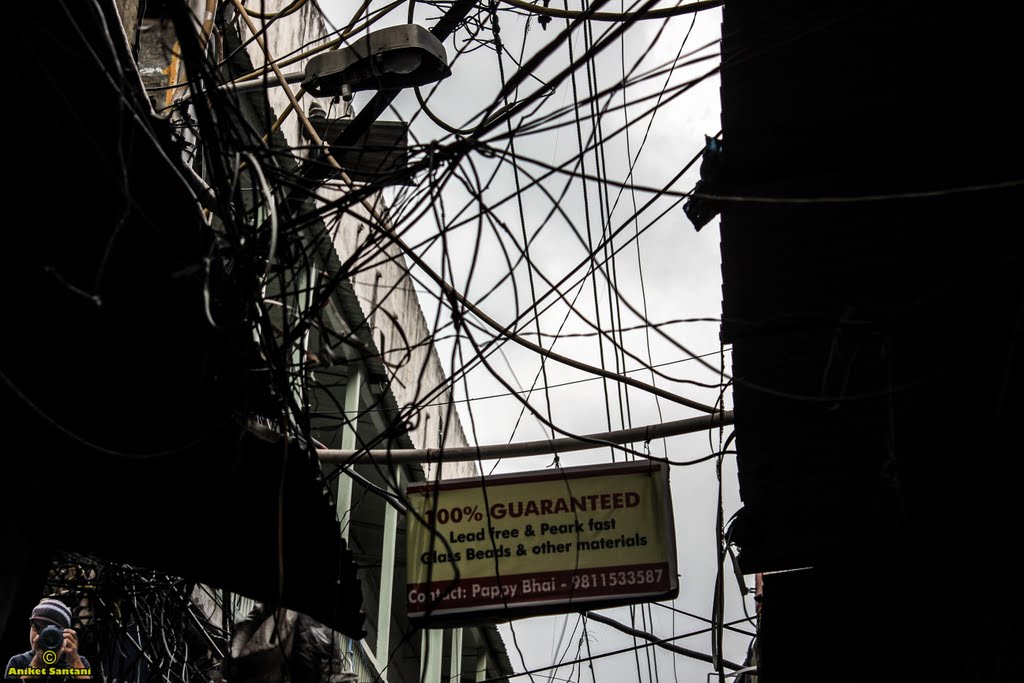 This is the best thing about Delhi, Time just flies away and it still remains as unexplored as ever. And before this log becomes a log on Delhi rather than Hampta, I’ll rest my case here.

Boarded bus for Manali at 5:30 PM. The journey was eventless with a dinner stop just outside the outskirts of Delhi. It was now the time for Mountains.

A cool breeze flowing through the Deodars and Chinars welcomed us to bustling town of Manali. It is time that we stop calling it a town. It is very much a city now. Loaded with Tourists all the time, it seemed unlikely that it was indeed an off-season. River Beas had turned into a beast by this time. It was cloudy throughout with Sun lazily peeping out occasionally. The weather raised the fear in me. I was in no mood to Trek in rains.

Thanks to TCS, we had arranged our stay in a super luxurious and picturesque Guest House “Johnson’s Lodge”. To add to the luxury, it was a free stay. 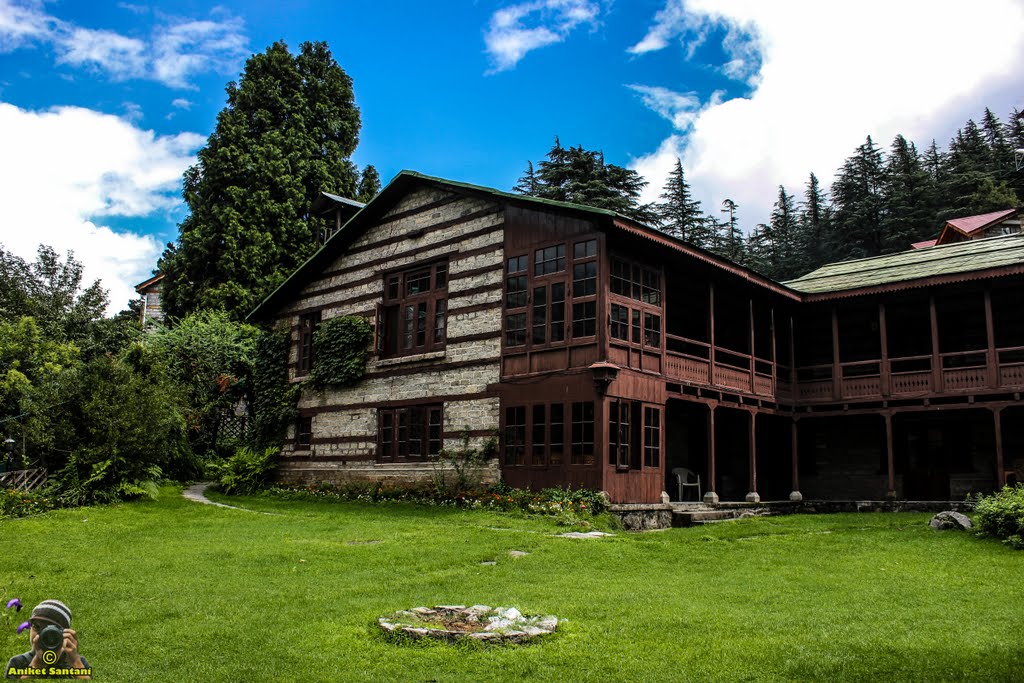 Trek was to start on the next day and we were in no mood to sit back in Manali and spend out my day. My suggestion was to hire 3 bullets and ride to either Rohtang or Manikaran. But going by the consensus, we hired a cab to Manikaran going via Naggar. The idea behind going through Naggar had its roots here in BCMT. Please find below the link to the forum where I had asked a question about places to explore in Manali for a single day:

We started from Manali at about 10 AM after a heavy Paratha Breakfast and negotiation with the Taxi Driver. The deal was fixed for 2000 bucks.

Soon we reached Naggar, where the star attraction, the Naggar Museum was closed due to weekly off. It was then that the Taxi driver informed us that we have a Naggar Castle too, which is being used as a guest house now. We decided that it is no harm to see it from outside and get some clicks. My camera had started getting restless. 

BAM! One of the taxi’s tires punctured just as it started to climb uphill. May be we are destined to only Trek on this vacation.

We climbed uphill on foot and reached Naggar Castle clicking some snaps on the way. The castle looked quite elegant. The wood work was indeed very intricate and the surroundings completed the need of a complete movie setup. No surprises that many scenes from a quite a few movies were shot here including the song "Ye Ishq Hai" from "Jab We Met".

Let the pictures speak the rest: 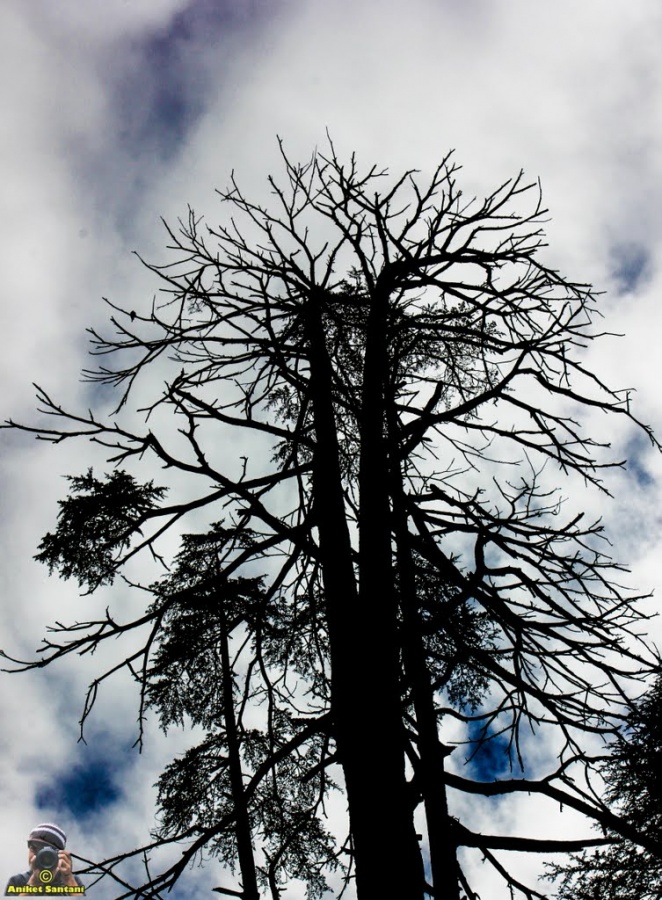 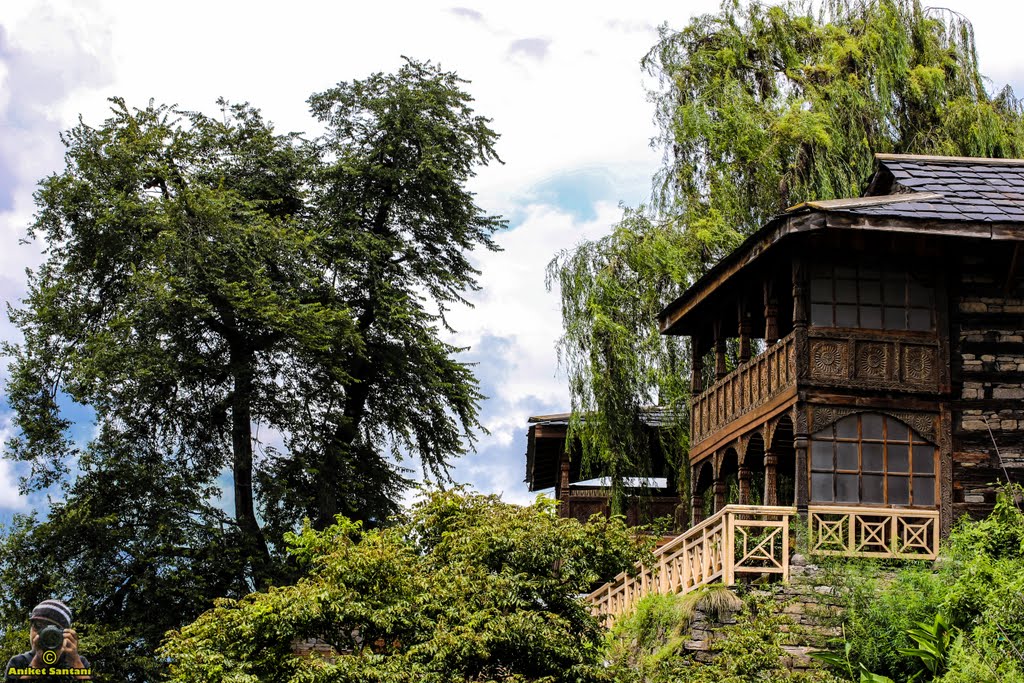 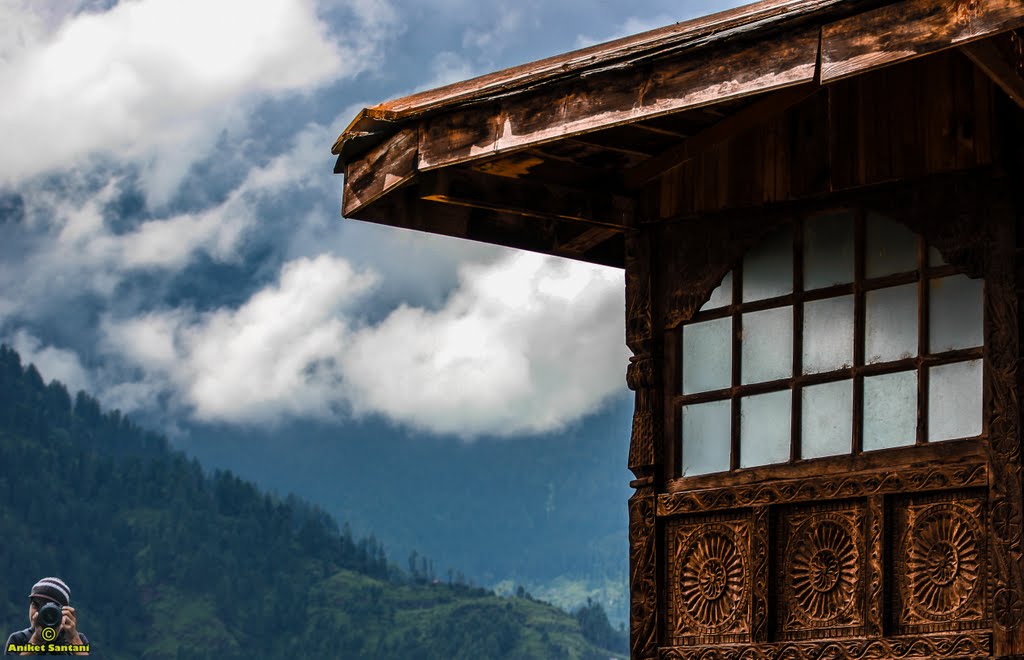 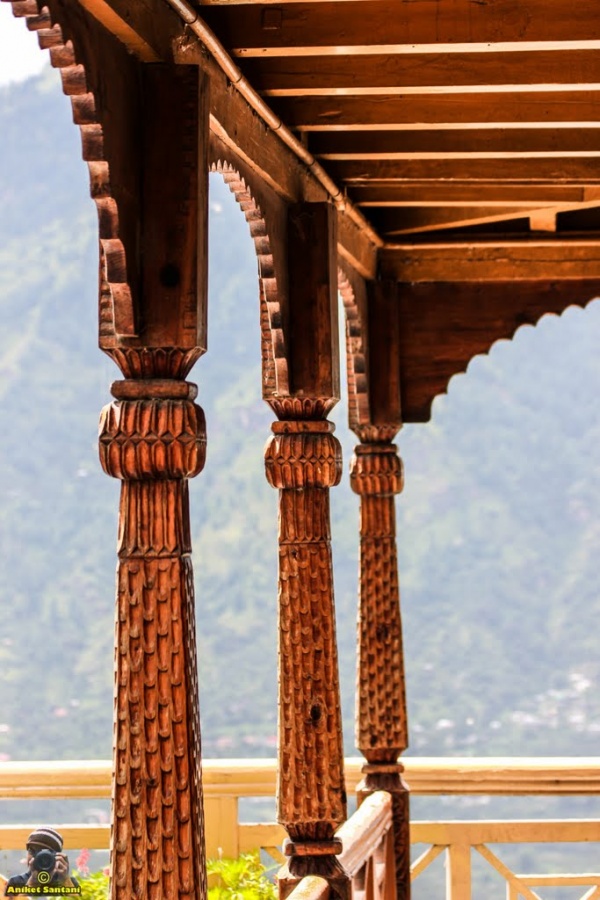 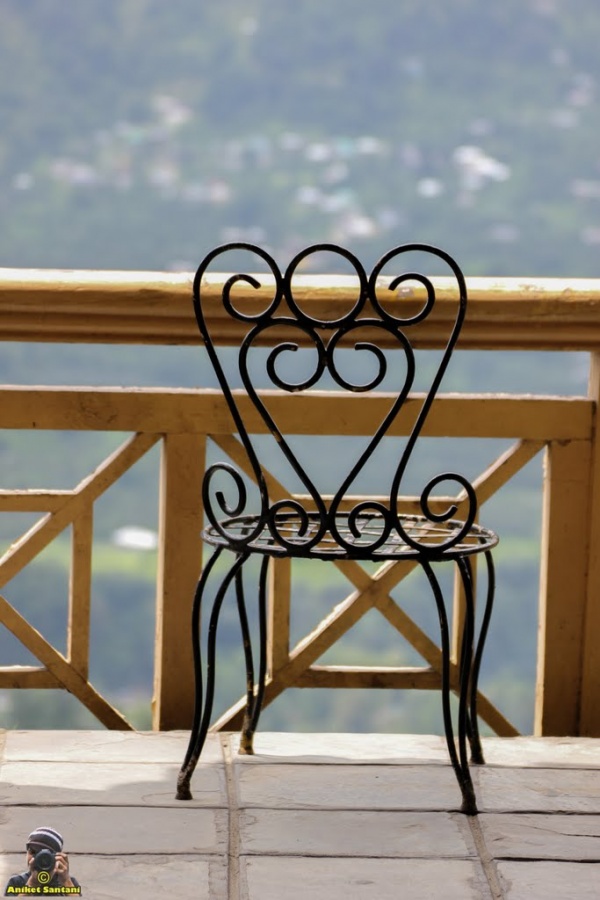 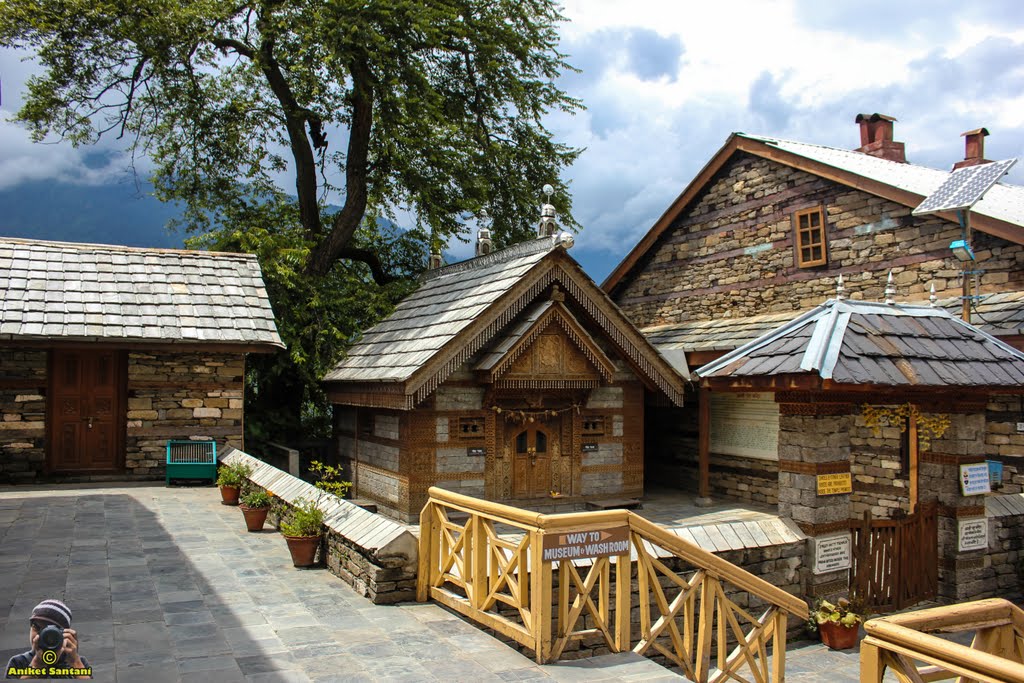 After spending good time with my camera at the castle, we resumed our journey to Manikaran. We had to stop for another 40 minutes or so in Kullu at a Puncture repair shop to get the cab’s Stepney de-punctured.

A couple of pics on the way: 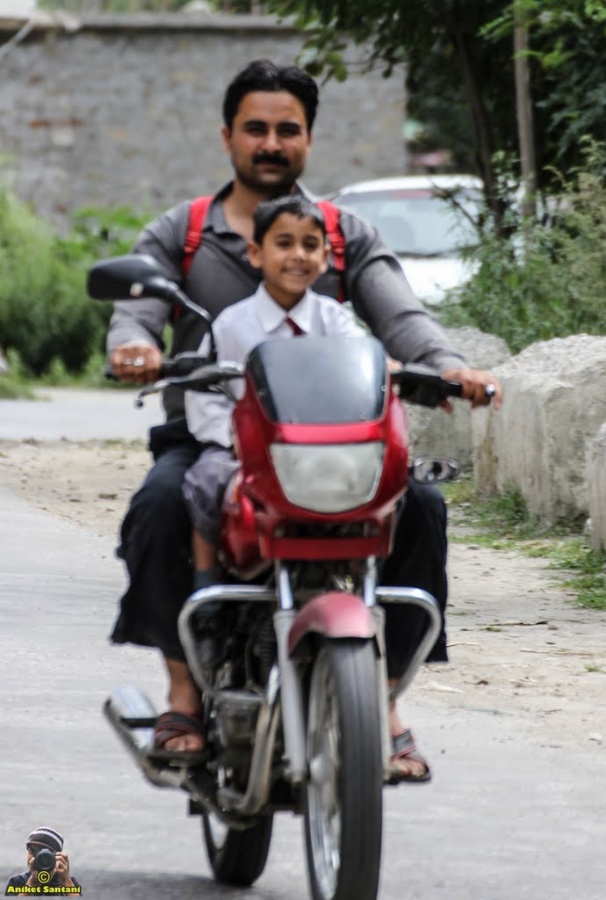 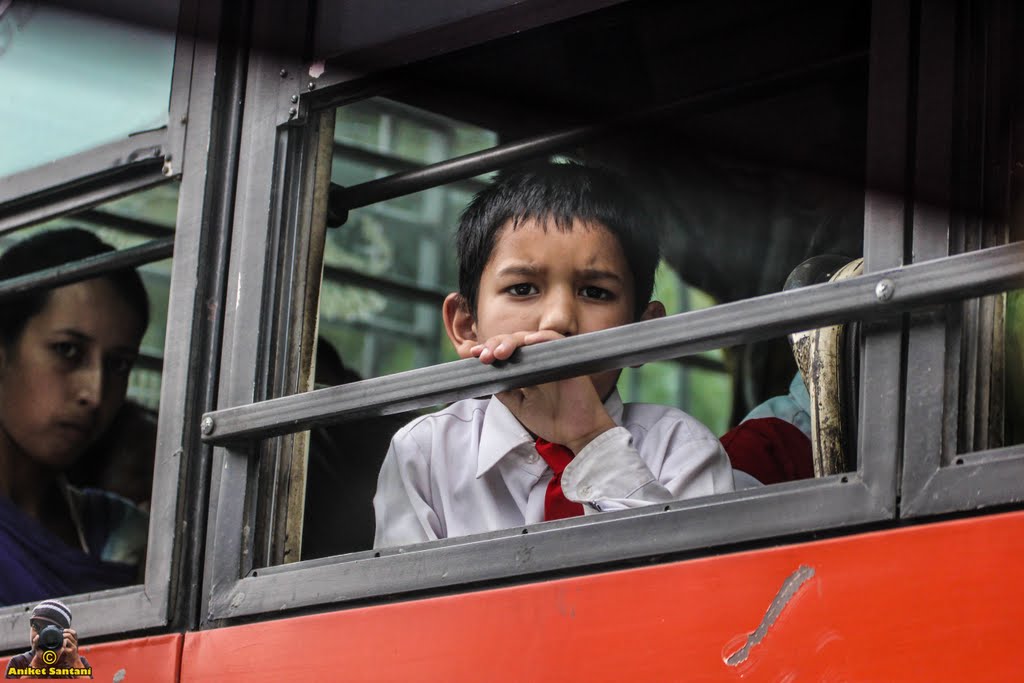 So, it was about 1 PM when we reached Manikaran. The river Parvati that flows almost through the Gurudwara was flowing with a deafening roar. I had never seen a river with such a fierce force. Manikaran, truly speaking seemed quite contrasting with my idea of a Gurudwara. I expect Gurudwaras to be peaceful and quiet. I feel relaxed whenever I go to a Gurudwara. It was so opposite here. Lots of Hustle Bustle, Lots of people, quite mismanaged premises. And when I went to the Prayer Hall, it seemed so small and unsymmetrical unlike any other Gurudwaras I have ever visited. Disappointed at this front, our only solace was Langar and a dip in Hot Water Springs that Manikaran is famous for. 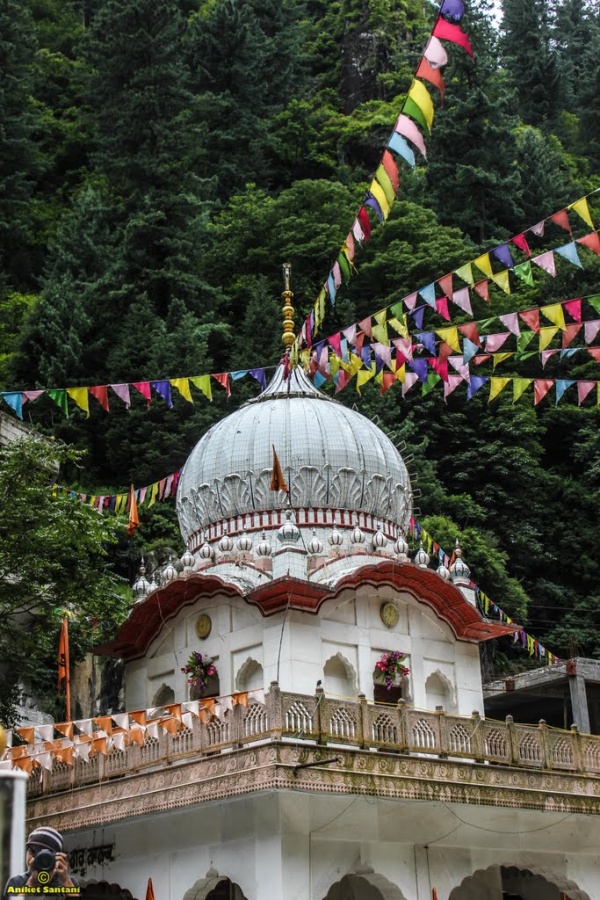 The food in Manikaran has always been prepared in these hot water springs. Even the tea was prepared with the water from the springs. Quite intriguing. Something to be pleased about at Manikaran. Also, throughout the premises we have taps connected to these springs. Running Hot Water throughout... No doubt, why there was steam rising wherever we set our eyes on.

On the way to the hot water pool, we visited Shiv Mandir and Ram Mandir. According to legend, the hot water springs are existing since the time Lord Shiva. It is said to be result of Shesh-Nag hissing out hot water with precious jewwl stones to pacify Lord Shiva’s anger over the lost Mani (Jewel) that belonged to Goddess Parvati. 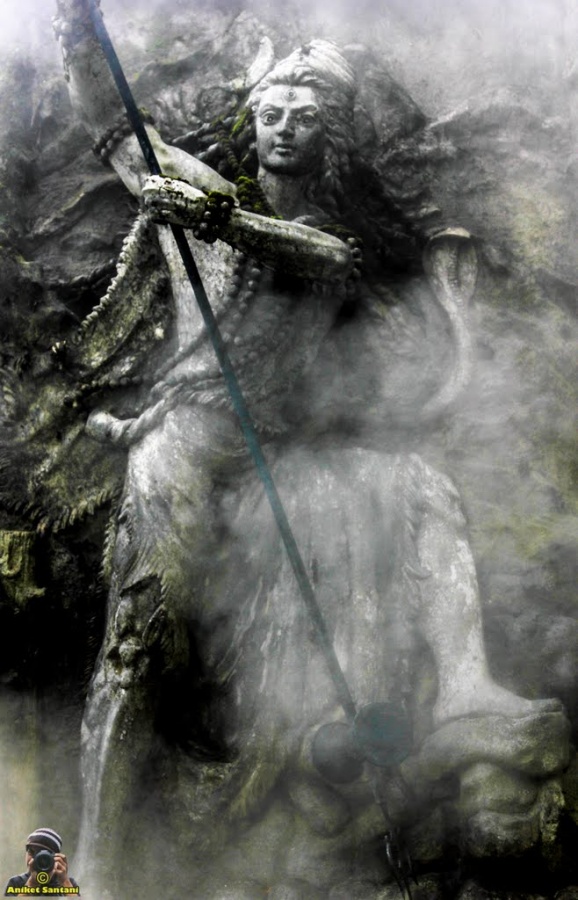 Finally it was time for the dip that I was eagely waiting for. The water in the pool for dip was way too hot than we had expected. But the dip was meant to be taken. So, slowly and steadily I landed up in water and let my body get used to the heated water. It is indeed a unique experience.

After the dip, we roamed about the premises and took some photographs before calling it a day. 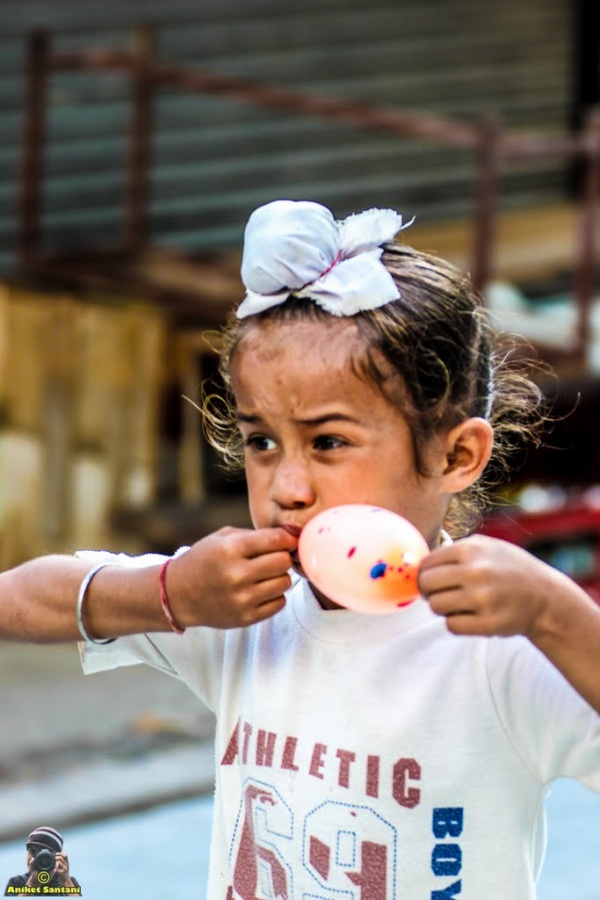 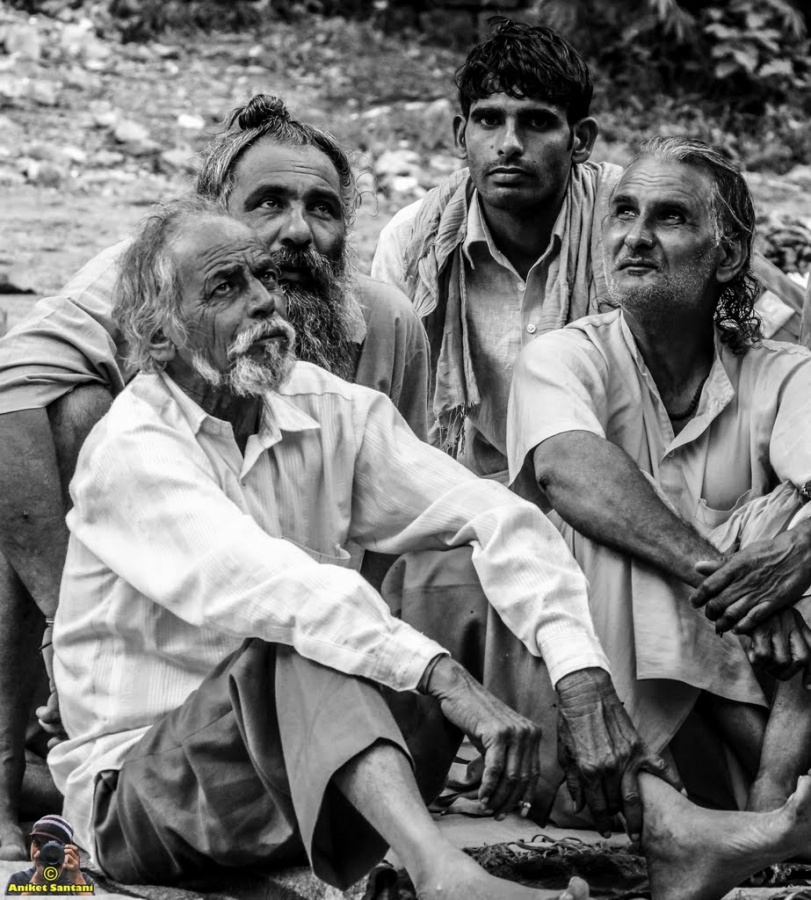 Return to Manali was eventless amidst forty winks, some Antakshri and lots of chatter. Back in Manali, we loitered about the market. I got a trekking shoe for myself. We slept early to start up early tomorrow.

Hampta pass was what on all our dreams that night... Our first Himalayan Trek was about to commence in a few hours.

Waaah!! That Chandni Chowk old residence pic is Superb!!
Aalo chaat is mouth watering.
Naggar reminds me of something, I had a day to spend in Manali while on trip to Ladakh this year..hired a scooty and set off to Vashisht first. Next I was thinking to go to Manikaran/Naggar. Proceeded to Naggar, had an accident few kms after

Chup Chaap returned back, gave the scooty back from where it was hired and ran away before they could notice the scratches, dents and catch me. Was hurt pretty bad btw.

Chalo mera bahot hogya, you continue with the awesome tale.