Very good captures of the forest !! Love to see it !!

We were damn hungry by this time. We were walking out of the National Park. While coming to the park, where the shared jeep dropped us (roughly 500mts from the park entrance), we figured out a small market. We thought of having some good food out there and then continue further. However, till the time we reached the place, we dropped all plans except the one to flee ASAP from the scene.

(NO RACIAL OR COMMUNAL OR REGIONAL SENTIMENTS INTENDED TO HURT)

What we saw was out of our thoughts. Plenty of local open jeeps were queued with at least 10-12 people in each with banners and posters and yelling around, chanting slogans. The mob included even children of 8-10yrs of age who were with same aggression as their elders. God knows for what, and what in actual was going on. A huge mob was also on foot and had almost jammed the entire market. Though, shops were open, but seen to be doing no business around. Don't know where the hunger went, but believe me, apart from an escape, there was nothing else required for that hour. Nonetheless, the entire market was guarded by army jawans. The ratio of Army jawans to the mob should have been equal at least if not more. They all were well prepared, and armed as well. The entire scene, and of course the media effect (what all I've read/ heard until now in my life) made me nervous. You can call me fattu, but the first thought ran into my mind was that we both brothers were together at same sight, leaving half of the family (mother and sister) behind. Anyhow, I along with y brother needed to rush back before the situation turns nasty. Honestly, I was feeling a life threat there in.

We were just looking for any shared taxi or mini bus going towards Dal lake, and found that a mini bus was stuck behind the protesting mob. I hesitated to board that bus, moreover because I was finding an alternative (what so ever) which may take us out of there before that crawling bus. We stood there for at least 15mins, but no luck, and finally by then the bus made its way ahead, and we found it the best option available. We boarded the bus and made sure that the bus would go to Lal chowk. The bus driver didn't seem to be in hurry, and was looking for passengers. He might be aware of all these, and just because of his confidence, I took some breath of relief.

Once I was in, and the bus started crawling again, I felt why not to click the ambiance. I pulled out my camera, took off the lens cap, but then I felt not to do so. A single mistake could land me in deep trouble. Moreover, I wasn't travelling alone, which was the fact I shouldn't forget for even a moment. Anyhow, what I saw, I couldn't showcase, but, for sure, I couldn't even forget my entire life.

The bus then gradually took it's pace, and I saw endless jeeps rushing towards that small market. Some record shots that I took, with my BB, which likely didn't attracted anyone's attention. 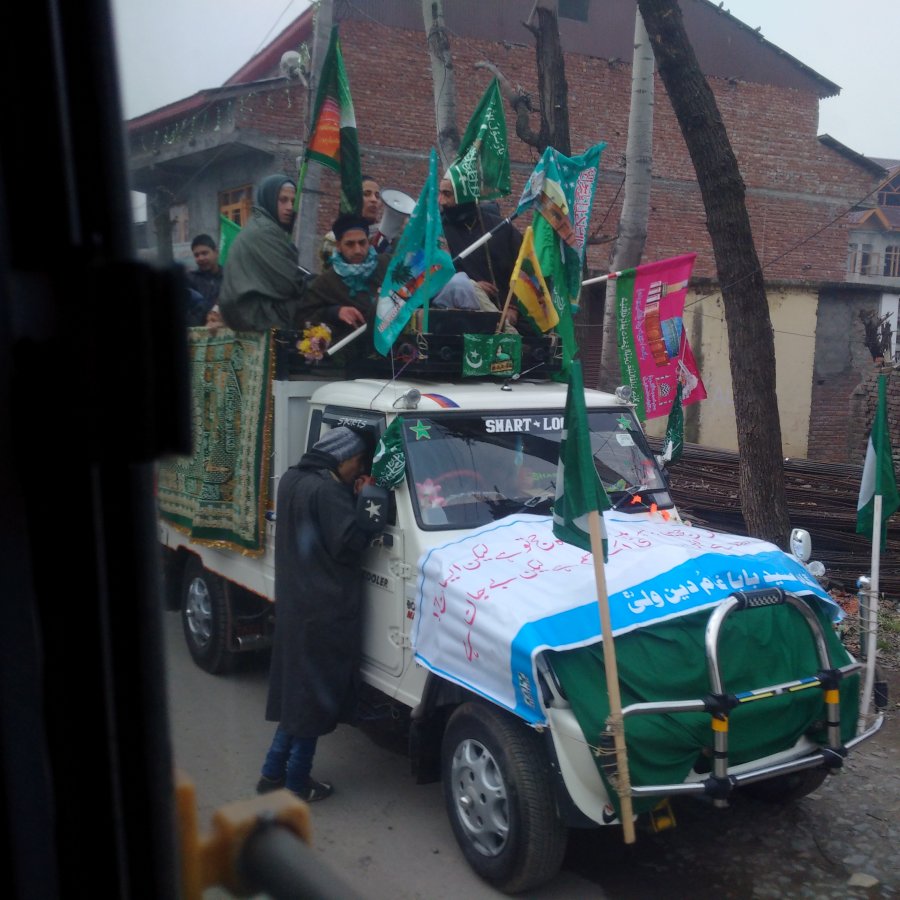 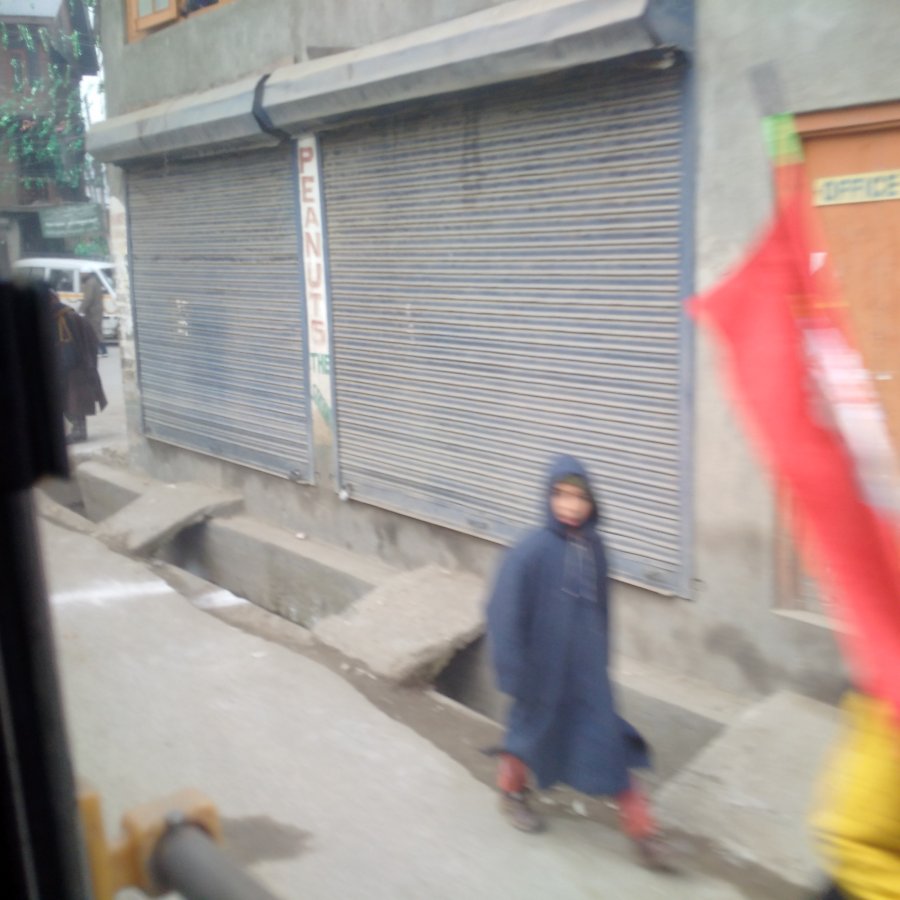 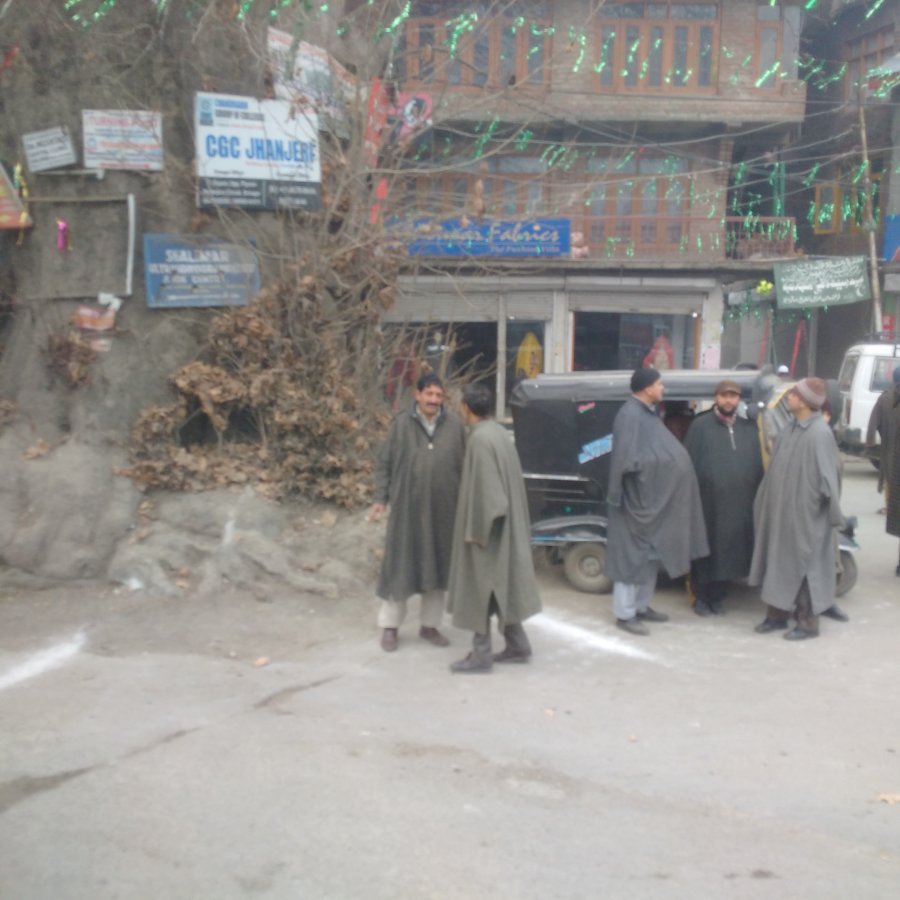 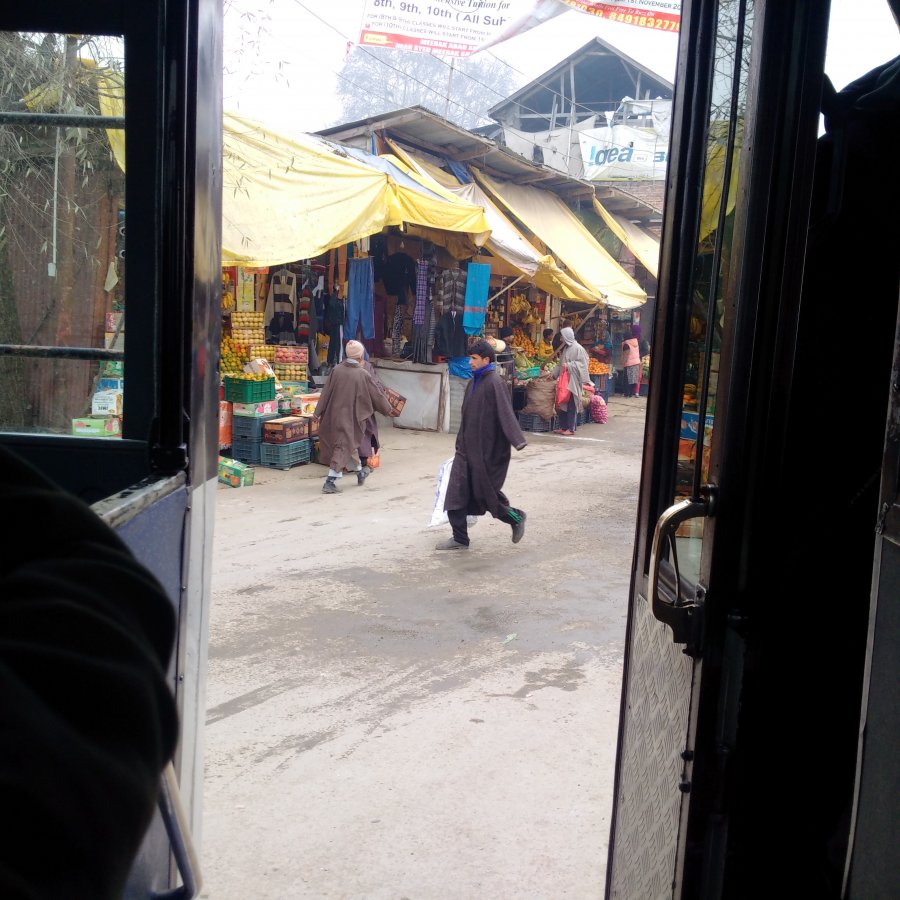 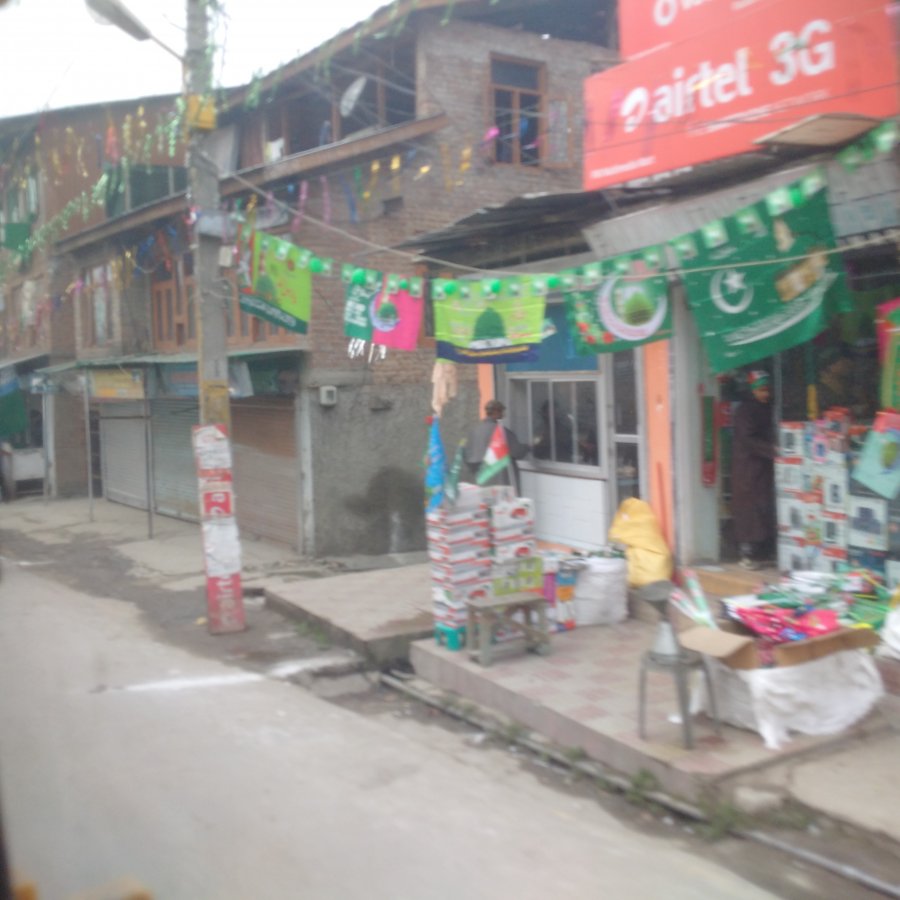 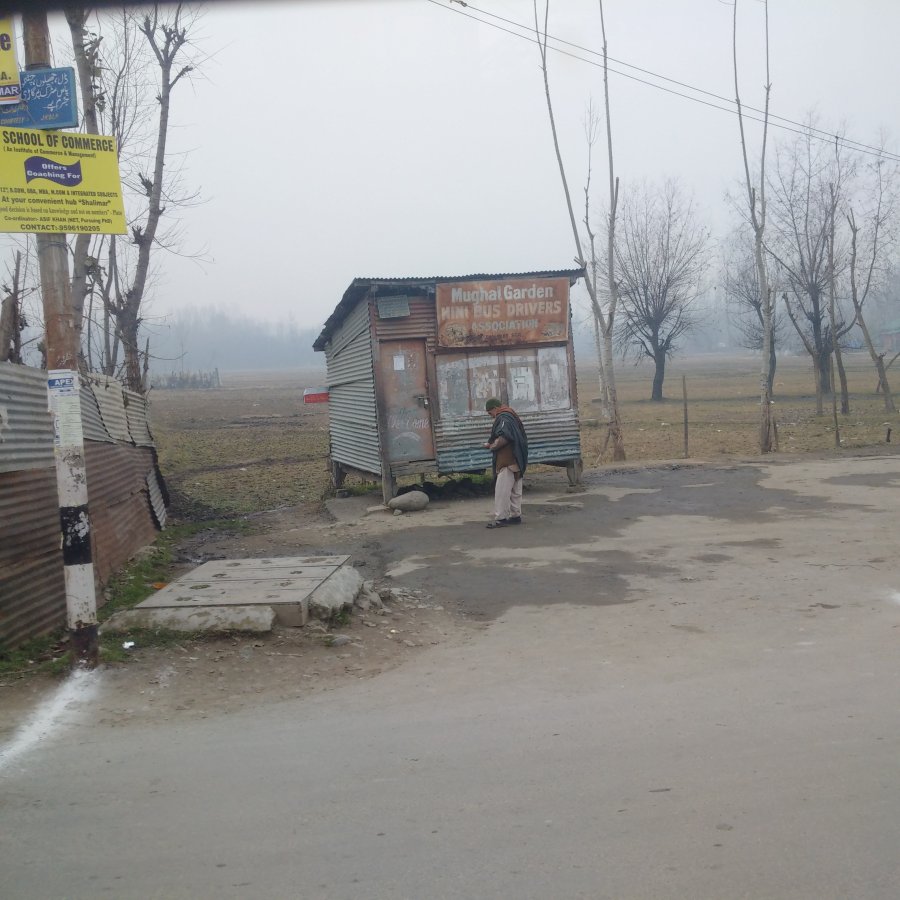 From Dachigam, till Lal chowk, mini bus charges Rs.15 per head (which was told by Mr.Rai as a cheap alternative to shared jeeps) hence, I paid Rs.30 for our ride, but en-route, I discovered that we were passing by Mughal Garden, so I asked to stop the bus, and deboarded, only to my surprise, the bus conductor returned me Rs.10 on his own and whistled as a signal to the bus driver to carry on. More than that I was surprised, I felt so wonderful upon the honesty of the Kashmiri fellow. When no one is ready to let a tourist (bakra) flee alive, this fellow showed his honesty to me.

With this happy mood, soon I turned towards the Mughal Garden, had to take several steps back with wide open eyes and astonishing face..

Sad to see no snow at DNP, it should be completely snowed out by now

rkbharat said:
Sad to see no snow at DNP, it should be completely snowed out by now
Click to expand...

I went there the very first time, so no idea of the quantity of snow. However, to mention, I didn't went more than 3kms trek as the park was officially closed. There wasn't any snow in city, so I didn't expected it in NP as well. Although, there was a good amount of snow on peaks which was visible, and also the upper side of the NP visible to eyes, were covered with snow. The officials said that there are possibilities of snow in mid January. Not sure if there's a climate shift or not.


....... With this happy mood, soon I turned towards the Mughal Garden, had to take several steps back with wide open eyes and astonishing face. Plenty of locals had blocked the entrance of the garden. They were on stairs, behind the gate, on the walls, carrying huge cloth banners and neighbor country's flags. Yes, and waving them high in the air on India's land was an actual intolerance act, which was so calmly tolerated by Indian army jawans. I salute them, for their patience and tolerance level they show up there in. This act just washed away all media reports we read/ hear. The actual climate is more dangerous.. "No gardening" was what we have to choose.

Fortunately, there were some food centers just in front of the garden. We had some good breakfast there in. To mention, we had food from the second shop (left side) and the food was damn tasty. We had couple of different items and all of them were excellently cooked, with reasonably fair price. Honestly, no loot.

My brother insisted for a Shikara ride which I wasn't in favor of after having a look upon the shikara ride fare which started form 2k and ended at 5.5k. I had no idea about the fare or so, hence decided to spend some time around and get some confirmation about the actual prices. I shared my views with my brother and asked him to enjoy the lake from the bank, till I get some clicks of it. I got busy in clicking photographs. The light wasn't so good initially, but then after some time, it went all blue, all over, which was when I got some decent shots.

Suddenly, my brother tapped my shoulder to ask me if we can go for Rs.200. At first I was astonished upon his words, but then I asked how much of ride we would get in this, to which he showed me a submerged gate made of bricks, which was too far from the bank. He told me that the Shikara would sail up to that gate and then return back, which would take approx half an hour. To my calculation, a Rs.200 ride for half an hour was something I never thought of. We quickly walked up to the Shikara. 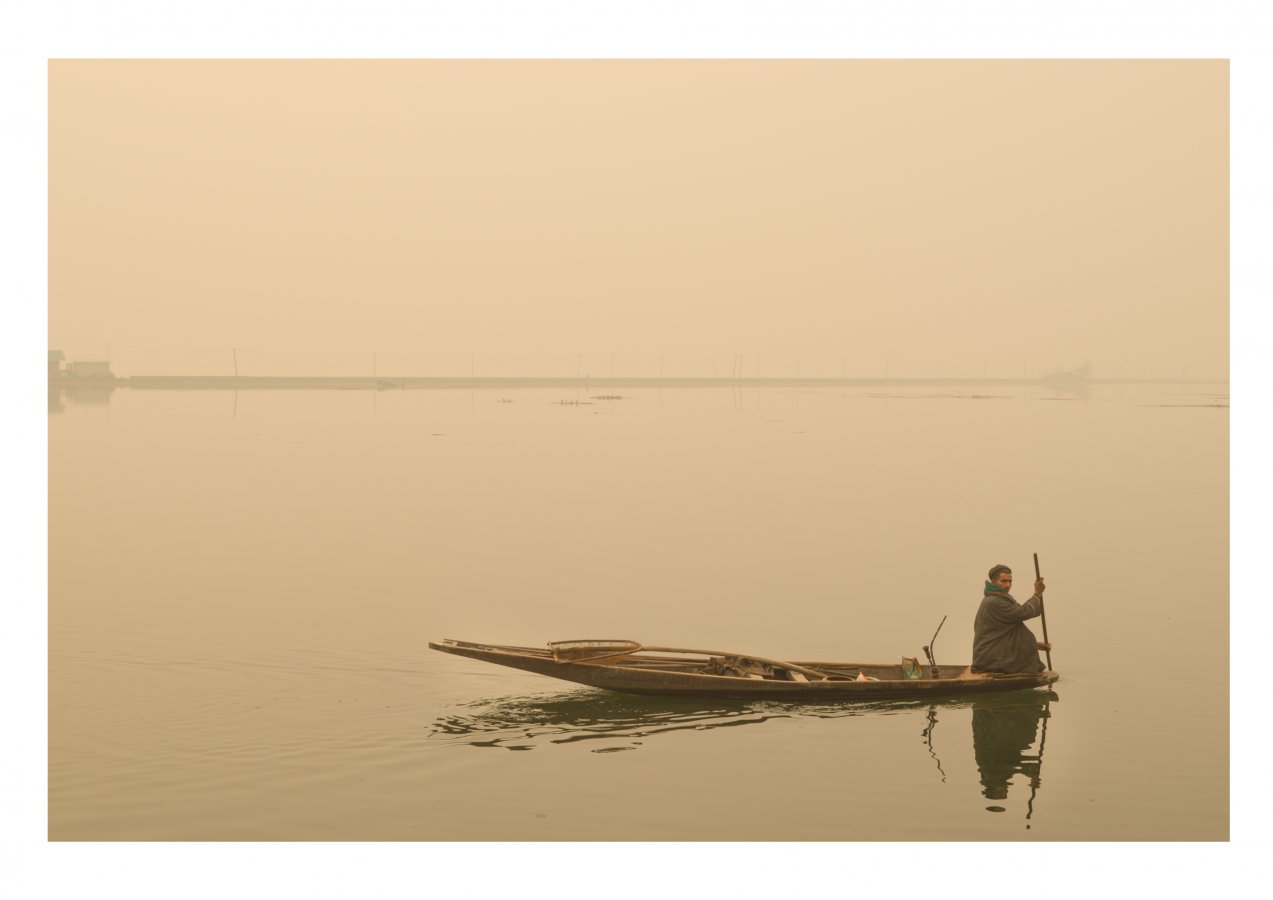 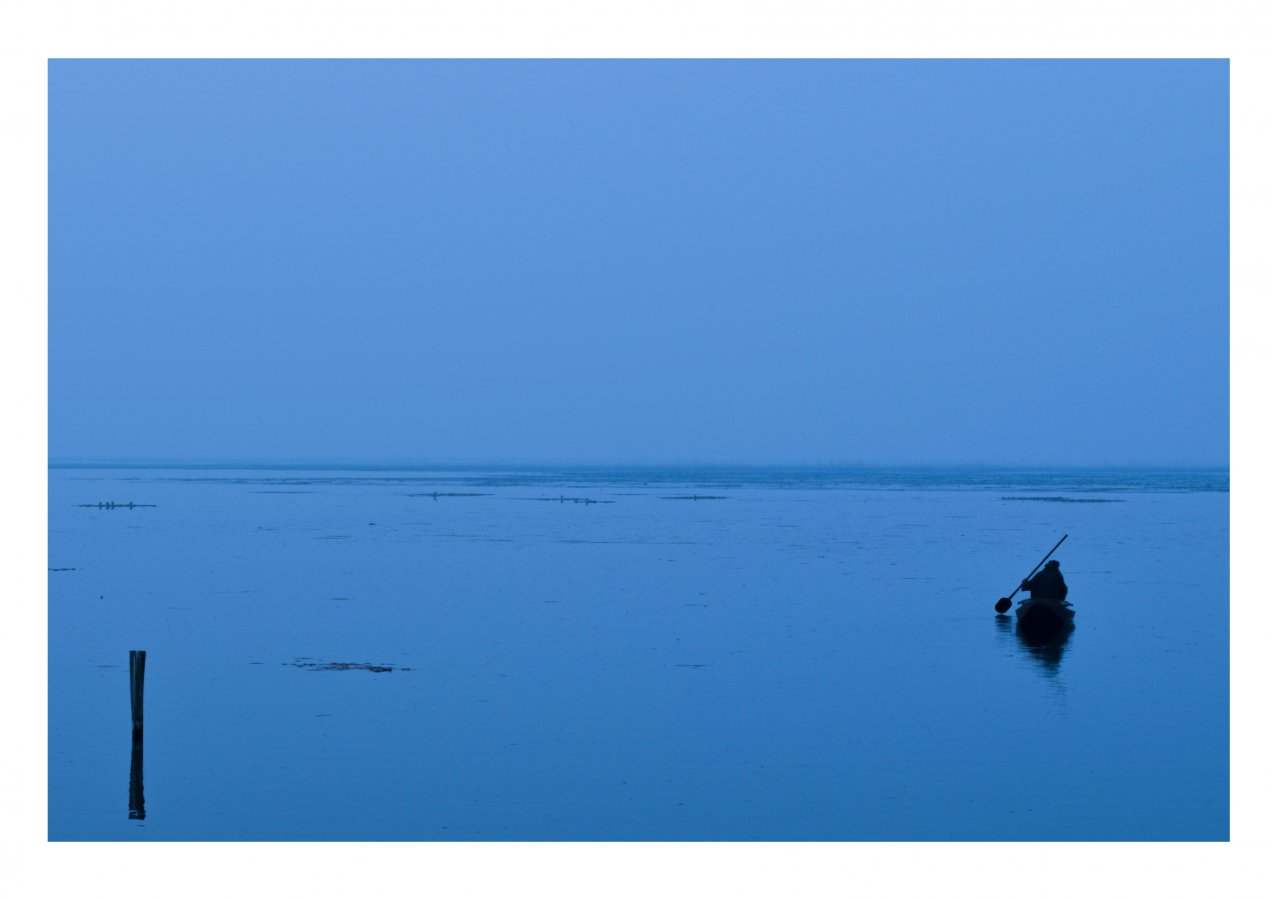 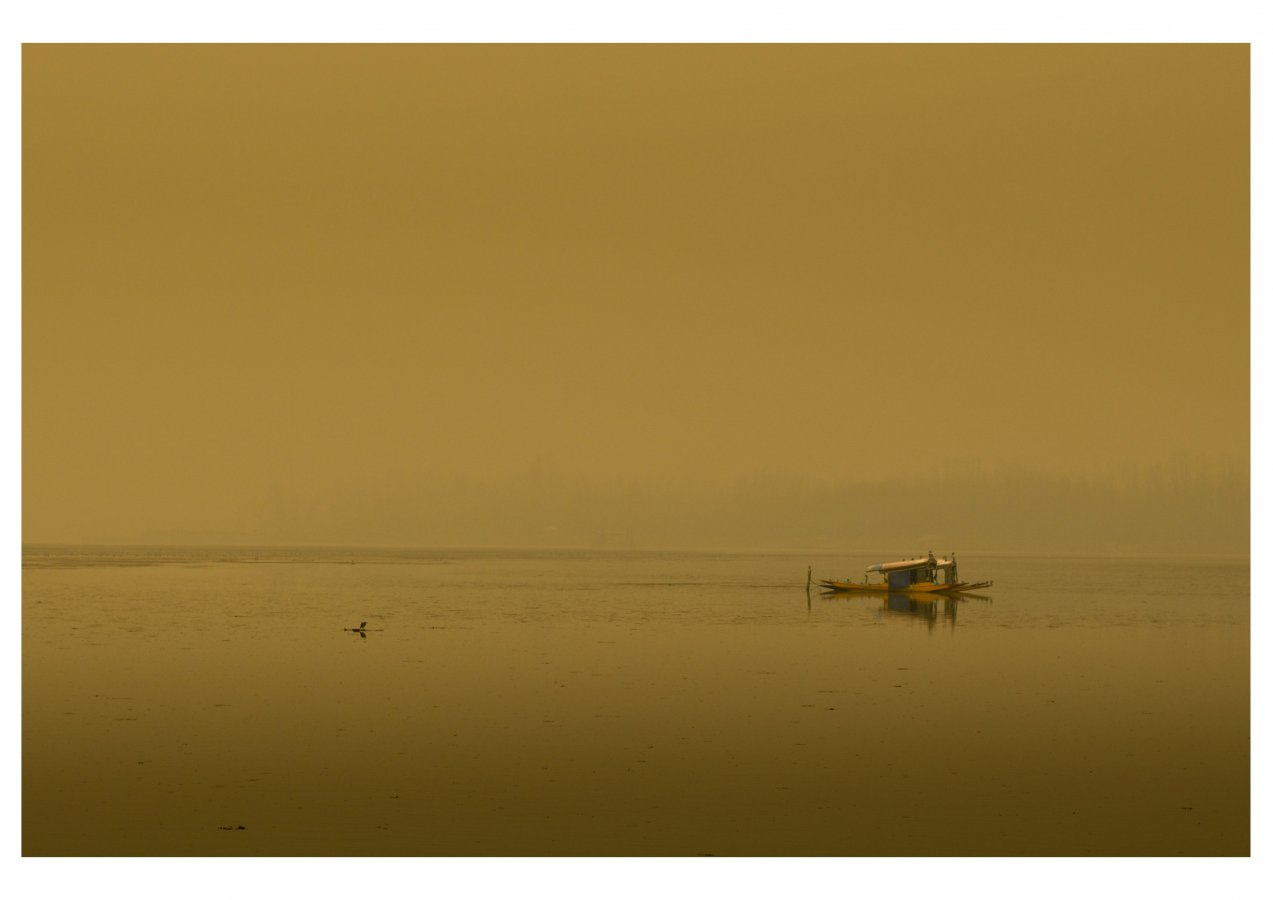 The very first thing my brother did after boarding the Shikara was to pose like this... I remember him doing the same thing when boarding the small paddle boat the first time at Sukhna lake, Chandigarh, 5-6yrs back. 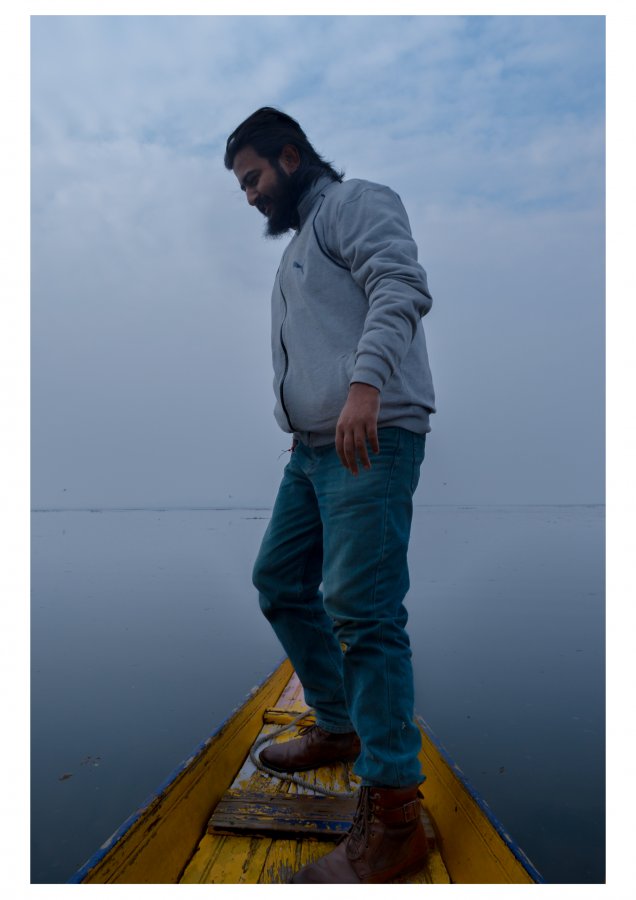 We enjoyed a wonderful ride for even more than half an hour. I clicked few photographs from the Shikara as well, but after that I laid down and enjoyed the ride peacefully. However, my brother did all what he can. He asked several times for a row from the boatman, but he said that he only had one. But, finally the boatman asked him to take a spare one, which was very small, and only if that suffices him. To my expectation, he got that small one and was very happy rowing on the other side of the Shikara. All he did was for a photograph I knew, which finally he has to ask me for and I clicked few of that for him. 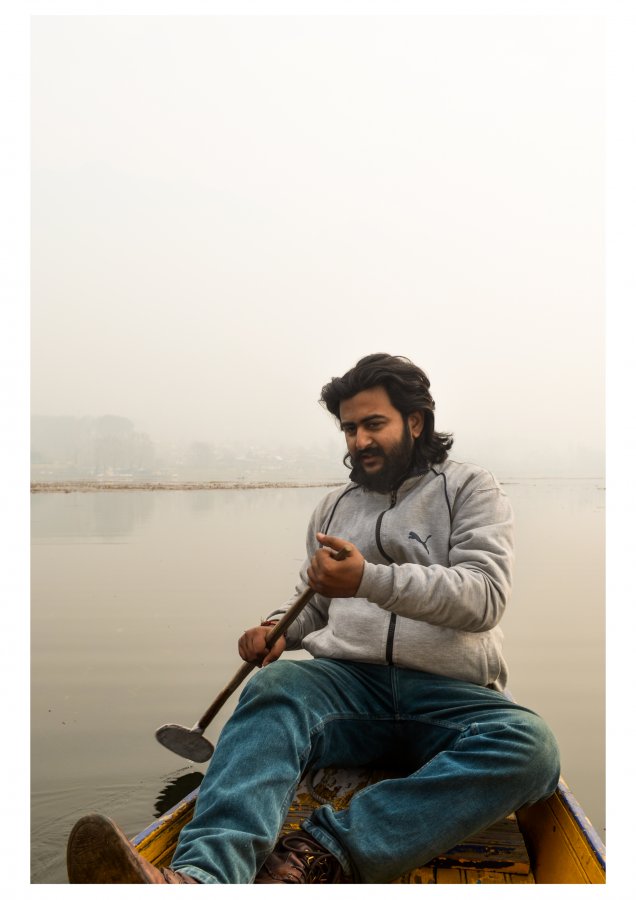 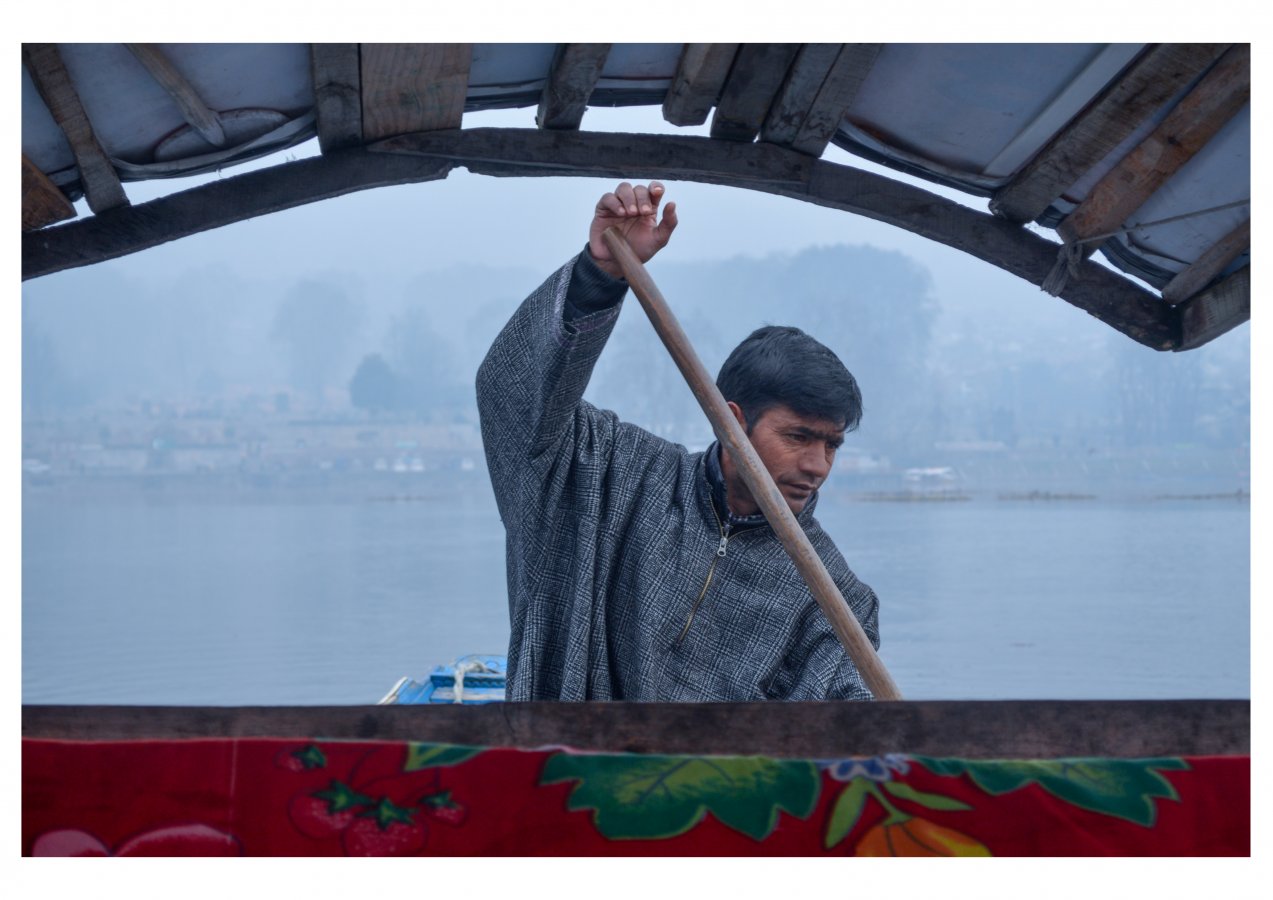