I always wanted to write a review of my Royal enfiled Thunderbird 350 CC and today i got time and chance to write one.
It was in the 2013 that riding bug hit me again .I had sold off my Yamaha FZ16 in 2012 as wasnt riding anymore until i stumbled upon
the new R.E thunderbird .

I had gone to Bandra with my wife for some shopping and while returning i thought of paying a little visit to R.E Brand store there.
This was my first encounter with the new Thunderbird.On seeing it in its physical avatar i thought taking a test ride of both the 350 as well as the 500 CC variants .
Upon riding the 500CC variant i was greatly impressed by the ammount of torque it generated ,while the 350 CC variant felt a bit behind .Anyhow never in
my wildest dreams had i imagined that i will be buying this bike in comming 7 - 8 months .

As time passed, i forgot about the bike ,but then again in Feb 2014 on valentines day me along with my wife had gone to Bandra and there again i couldnt resist the urge and i took a test ride of both the variants .By this time the want to buy the bike had increased many folds .After the test ride we went home and there began
my analysis regarding the bike . I started reading about all the reviews of the bike (350 & 500 CC variants ) that were available on the internet.
I also started viewing all the video reviews from these auto channels which were present on youtube .

I was so obssesed with this that when i woke up in the moring the first thing i did was to check whether any new review regarding the bike was available on the internet .In fact my wife was getting irritated because of my behaviour.While in reality there was a war going on in my mind about the variant that i should be going for .It was MIND Vs BRAIN

a. This was going to be a weekend bike.
b. I wasn't going to use it for day to day riding ,so why to pay additional 40k premium .
c. In city riding was there a need for so much torque ?
d. Praticality reasons viz Average
e. And most IMPORTANT one was Wify control "No need to spend so much on a bike "

Well in the end my brain took over the matters of the heart and i booked a 350 CC .Somewhere in Sep 2013 i went to the showroom and before booking the bike,
i again thought of taking a test ride of 350 as well as 500 CC variants.By now my wife was almost furious at me but anyhow such things dont happen everyday.
Even the guys at the showroom started to recognise me hahahahahahahahahhahaha .After the test ride i gave a 5k booking ammount cheque .

Time passed and somewhere around Nov 2013, i got a call saying my bike has come and i need to make the final payment .I asked for an auspicious day at home &
decided upon the date . On the day of delivery i took an off from office and went to the showroom with my wife .While going we both were quite excited of our new acquisition. 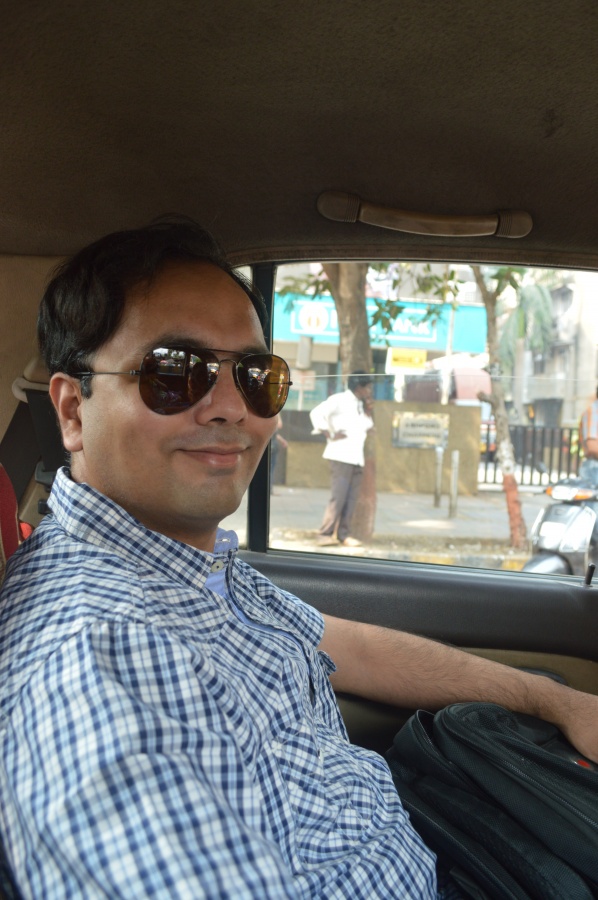 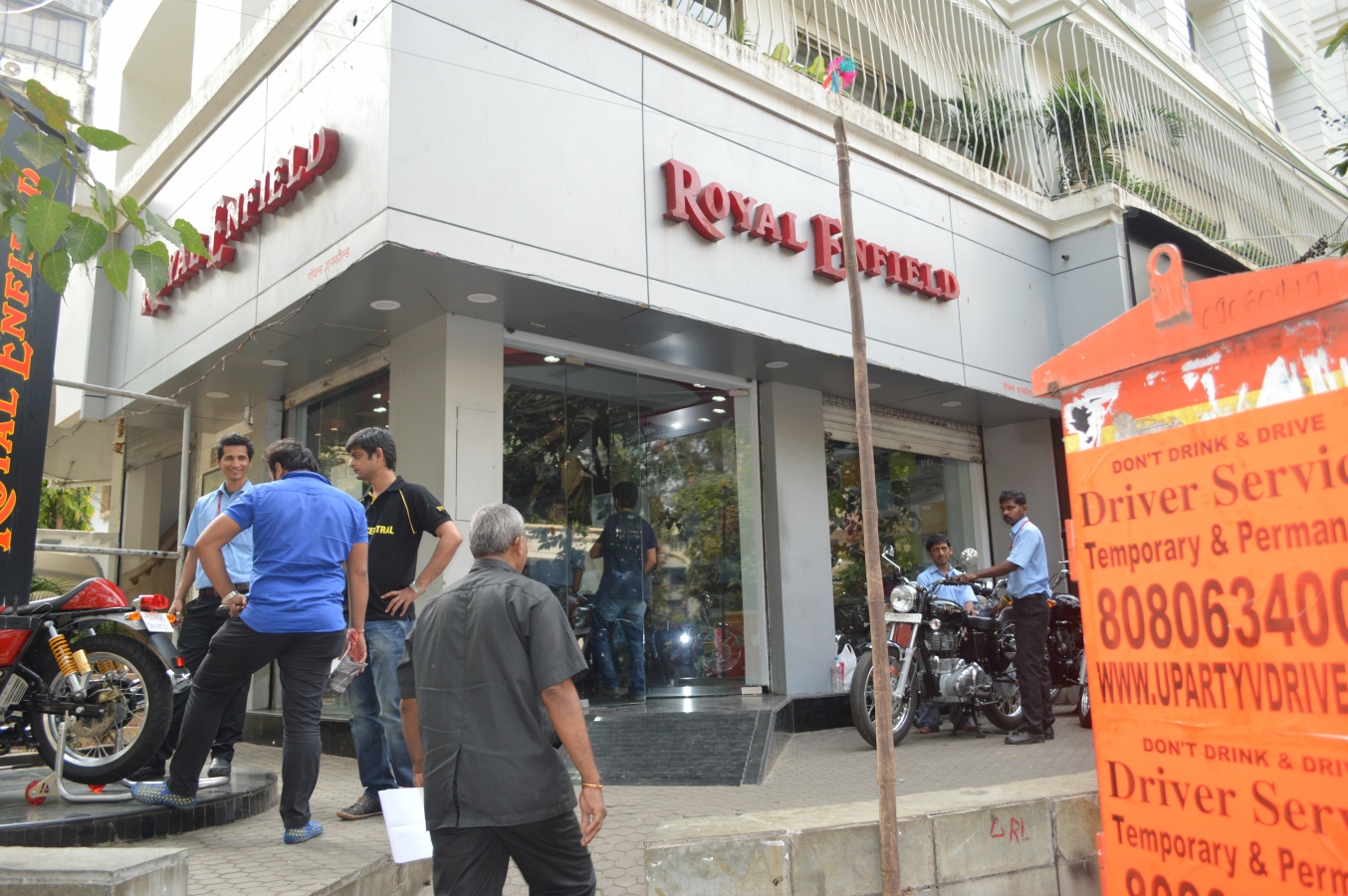 On reaching the showroom ,we came the know that the bike has still not arrived.On enquiring further i came to know that it would
take atleast 1 -2 hrs more for the bike to reach the showroom.I was extremely furious with the salesman there cause the previous day
i had specifically asked him what time should i come to collect the bike .He told me 11 AM sharp ,but considering the buffer time we went there at 12 PM
and still no sign of my bike . The showroom manager intervened and assured me that the bike will reach within 30 mins .

As i didn't want to spoil my buying experience we thought of having our lunch in MacD's and off we went to that place.After about 40-45 mins we returned
and there was my bull waiting to be tamed . I quickly finished all my formailities ,also did a PD check and found everything ok .After clicking few snaps of myself and the bike we left the showroom .

WITH MY NEW ACQUISITION 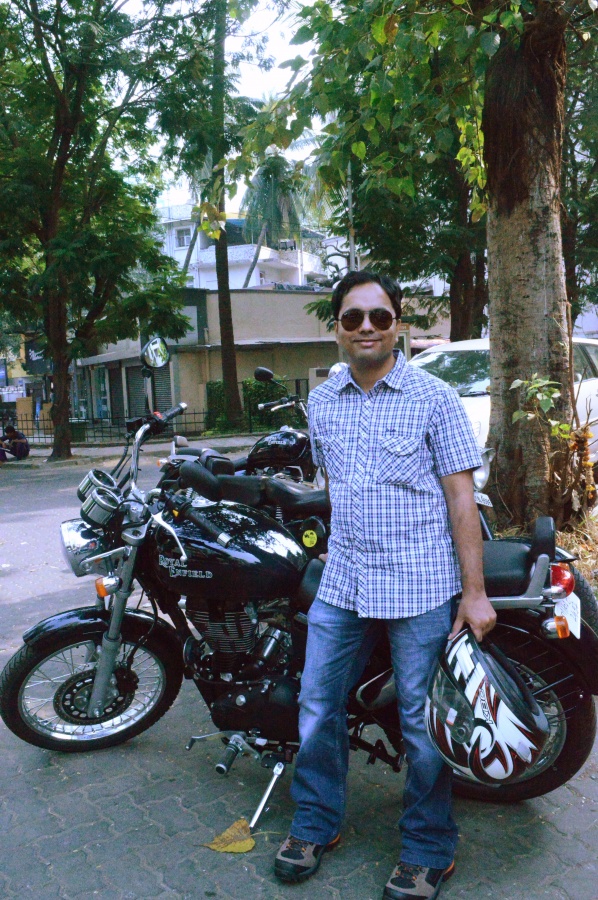 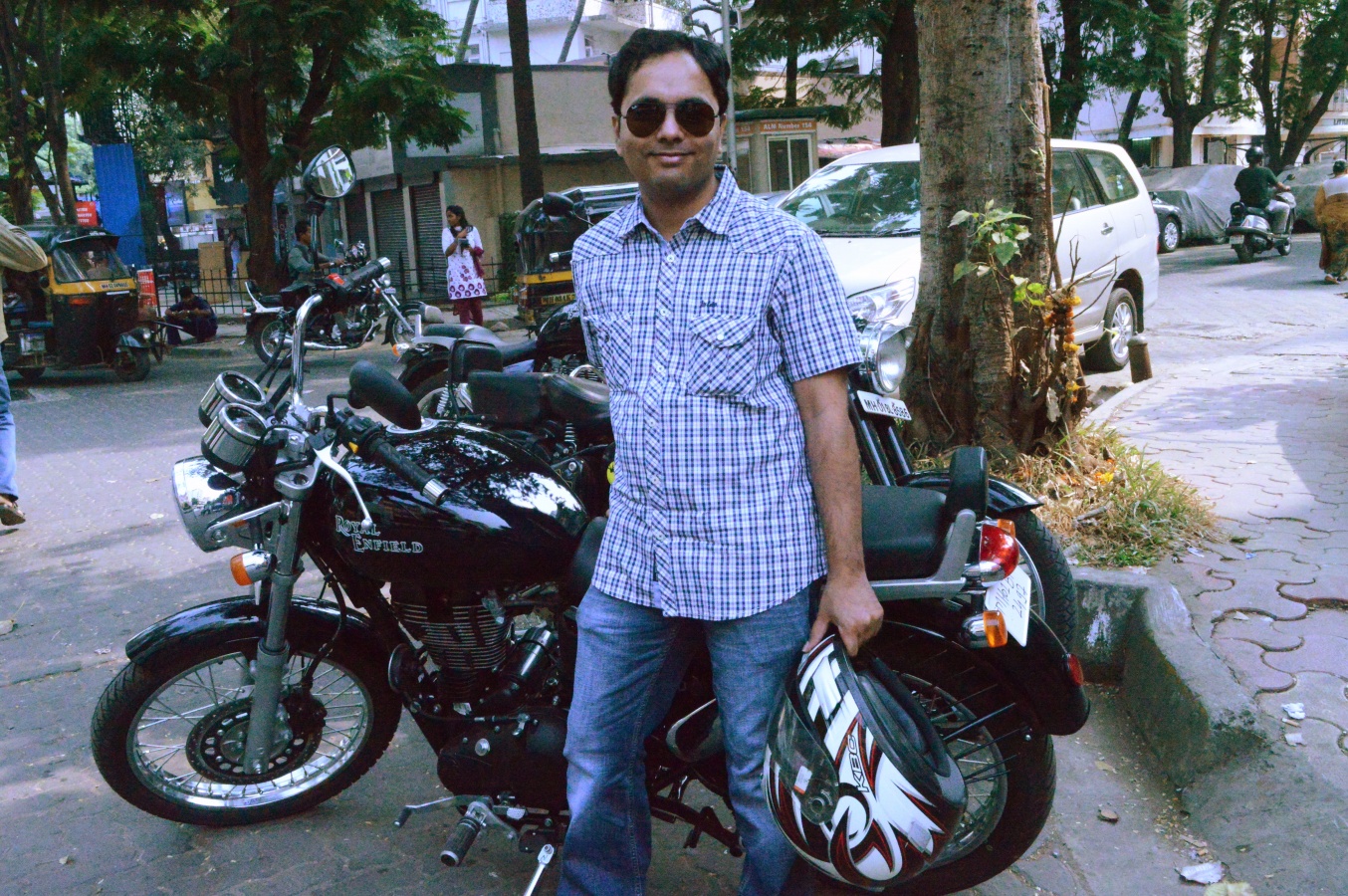 While returning home i couldnt aviod all the pyring eyes.After about going 500 mts from the showroom at a red signal i switched off my bike.
On the signal turning green i couldn't start the bike with an electric start !!! Here i was with a brand new bike not even a day old and i faced my 1st
issue . Not that i was not prepared for all the niggles and issues which R.E is known for ,its just that i didnt expect it so soon .

I kick started the bike and we reached home .On reaching home i gave a call to showroom manager and he asked me to show the bike at the nearest service center.
Man was i very very disappointed but somehow the next day i reached the service center .The service center guy checked the bike and tightened some screw near the battery and the problem was resolved .Trust me i was the most happiest person that day.I quickly went to the temple for the MANDATORY puja finished all the chores there ,came home parked the bike and went to my office .

AFTER POOJA IN TEMPLE 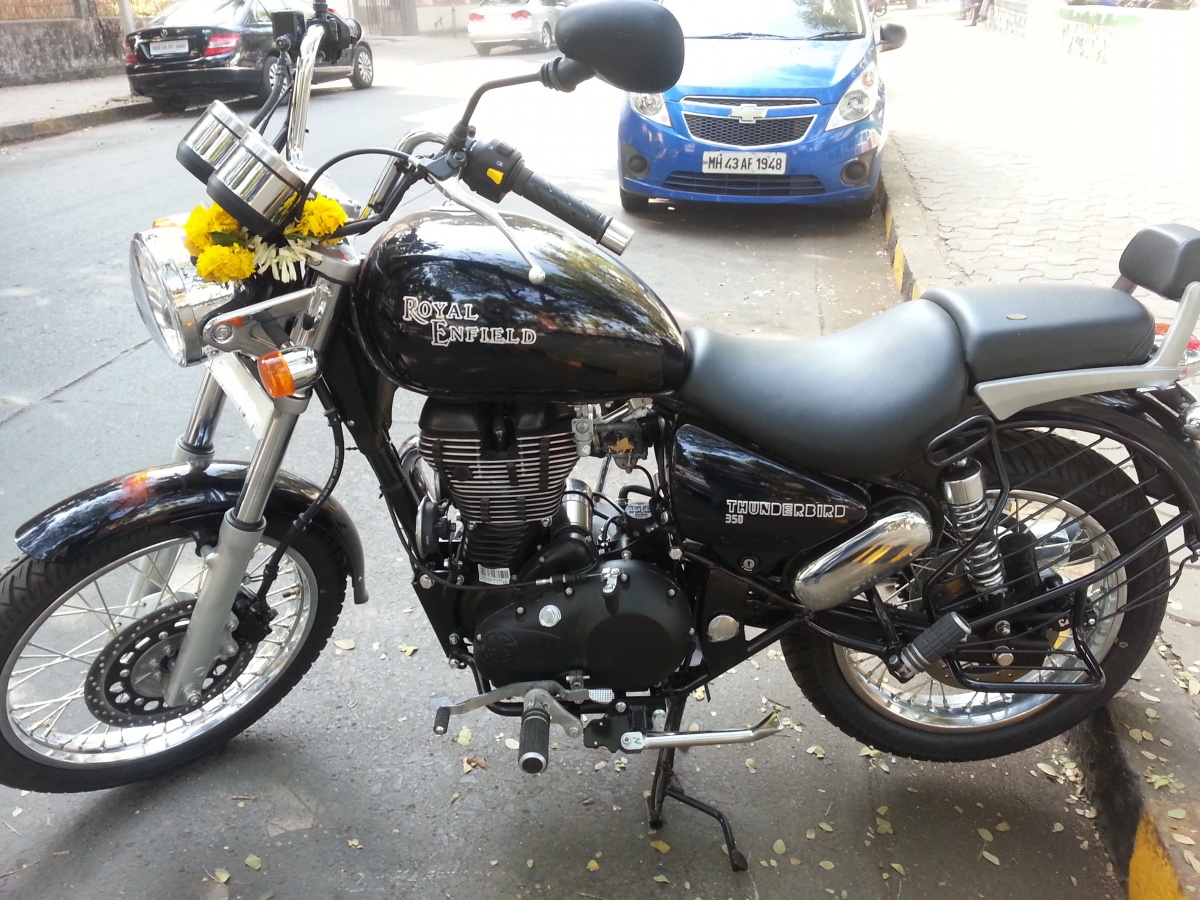 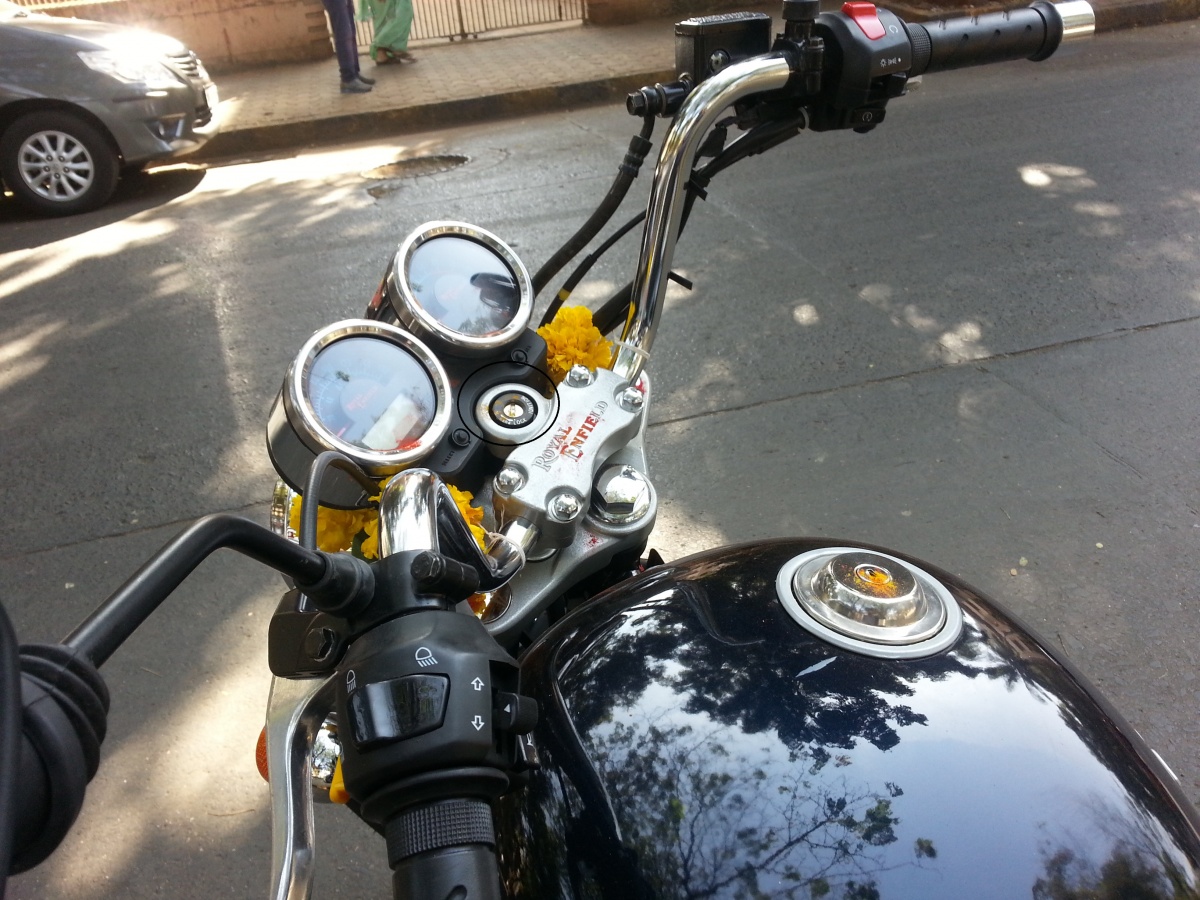 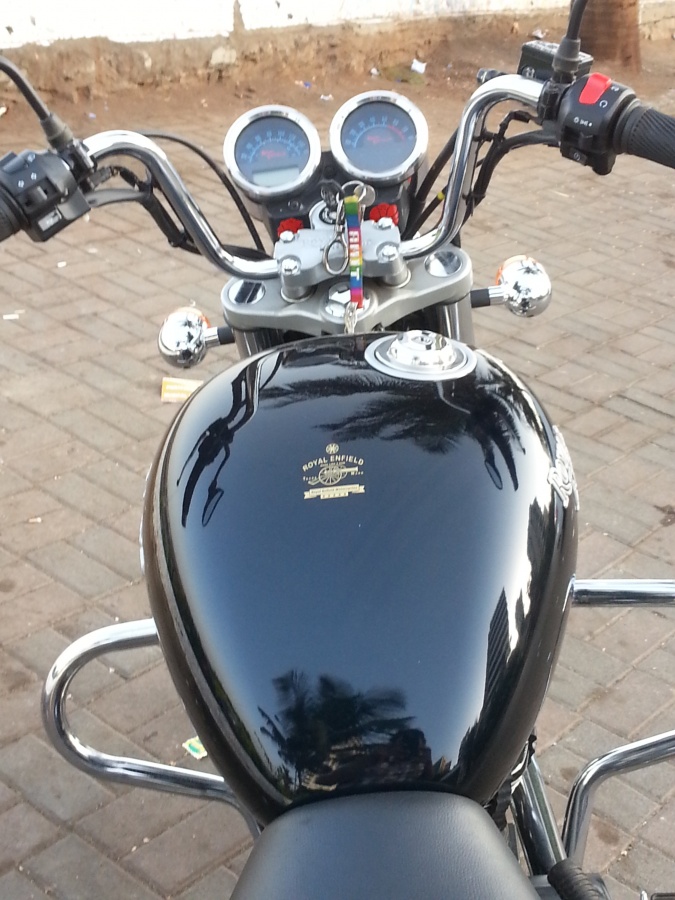 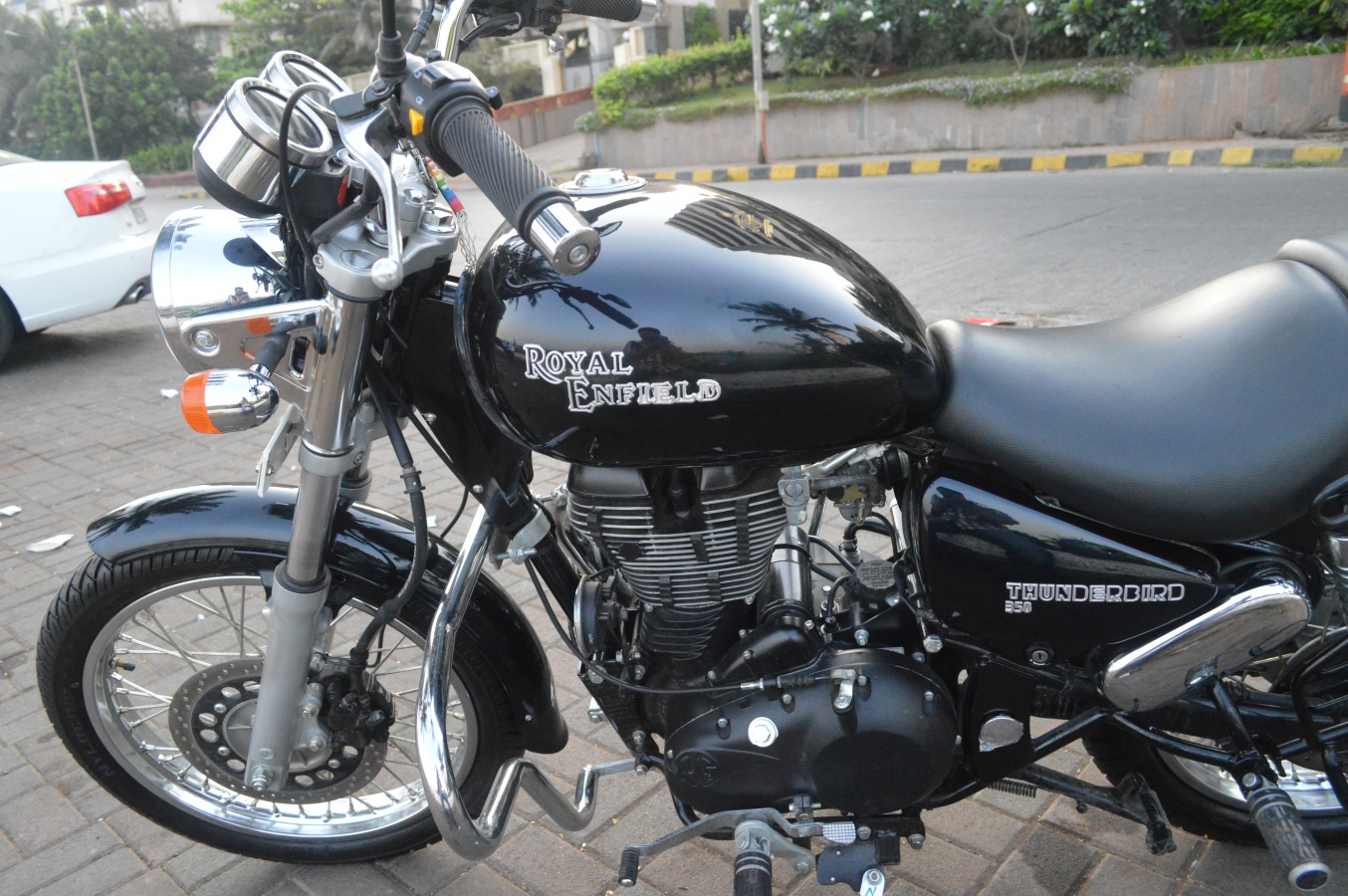 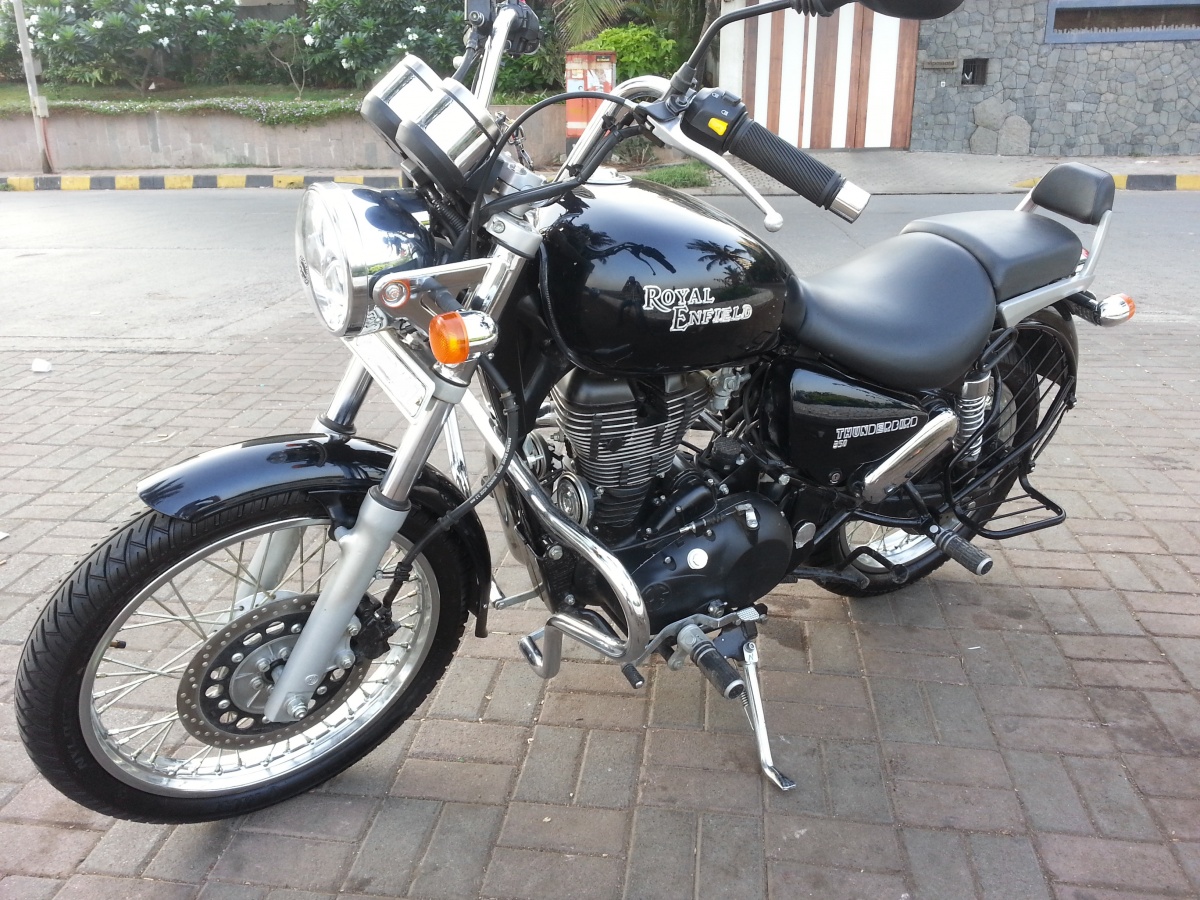 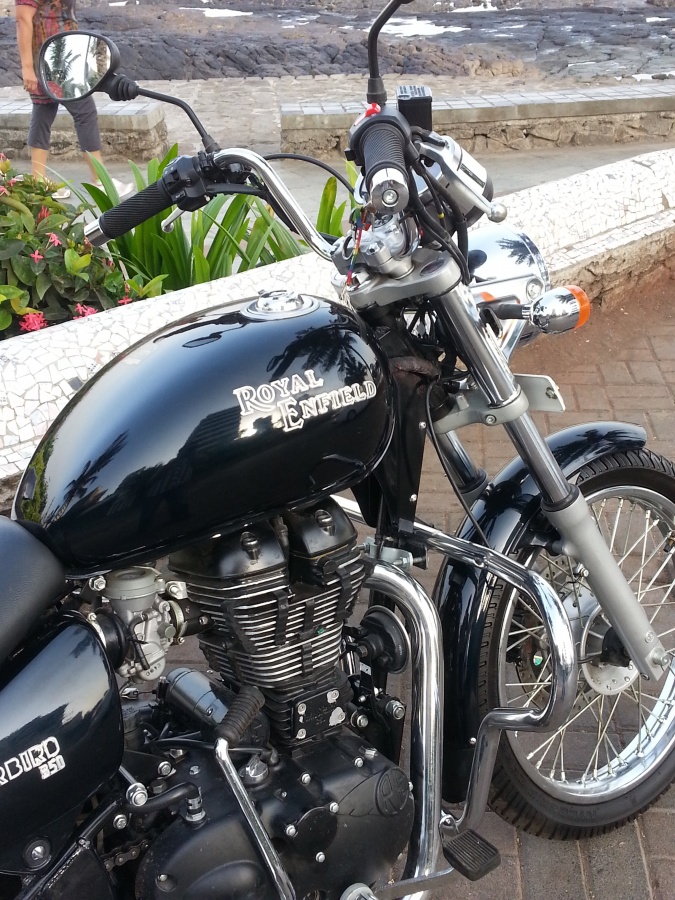 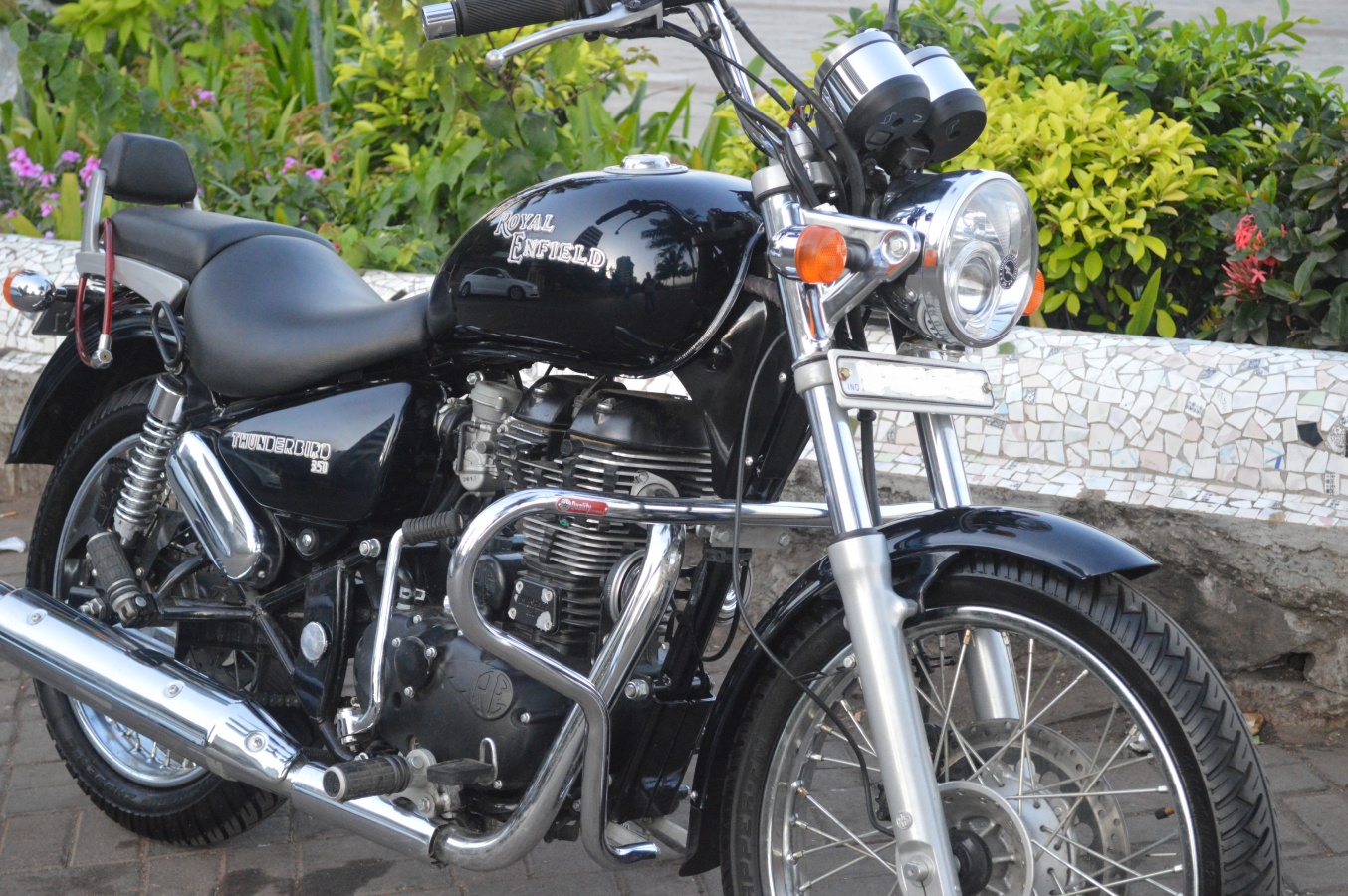 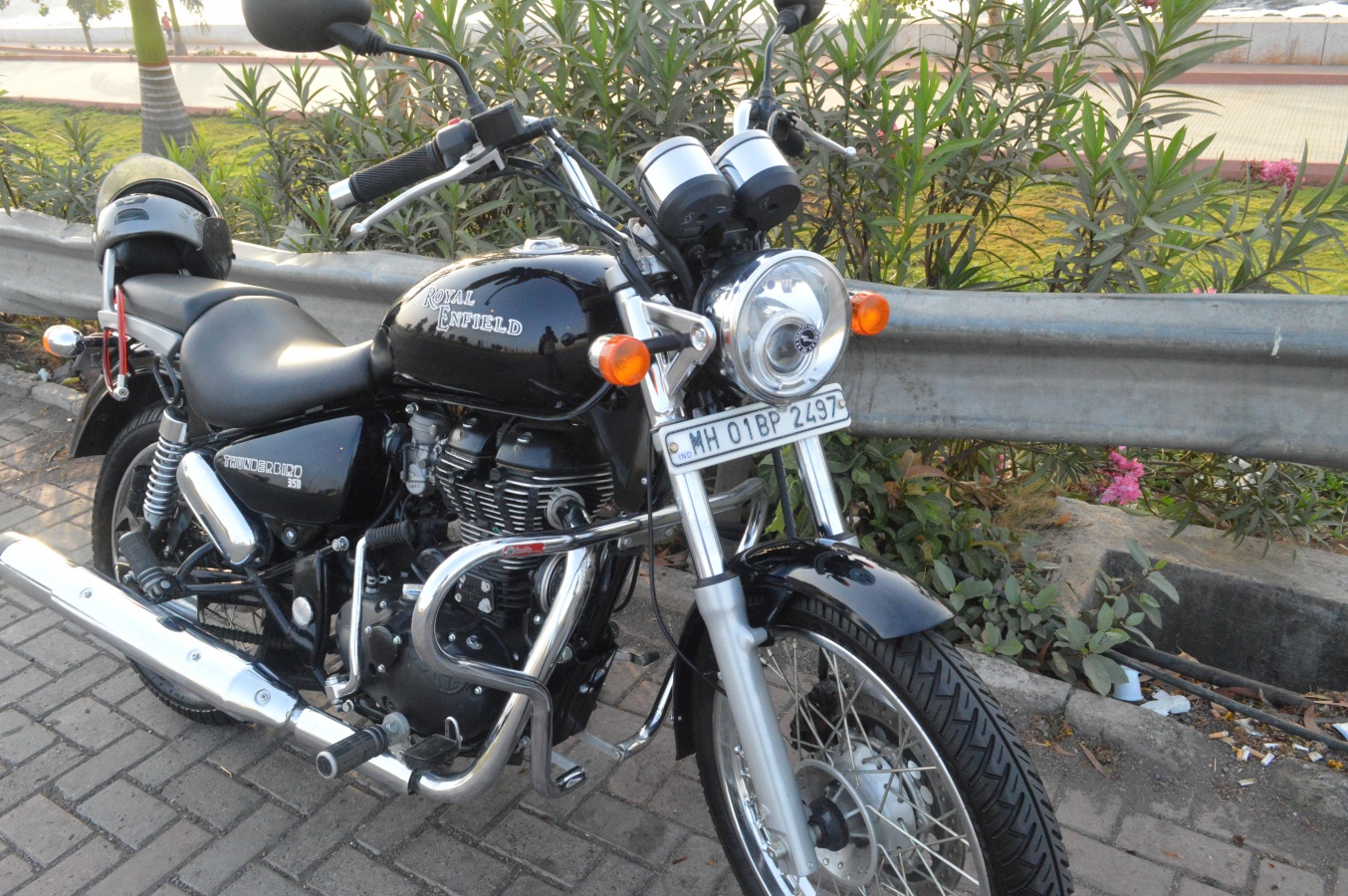 MIRRORS TEND TO LOOSE THEIR POSITION AT SPEEDS 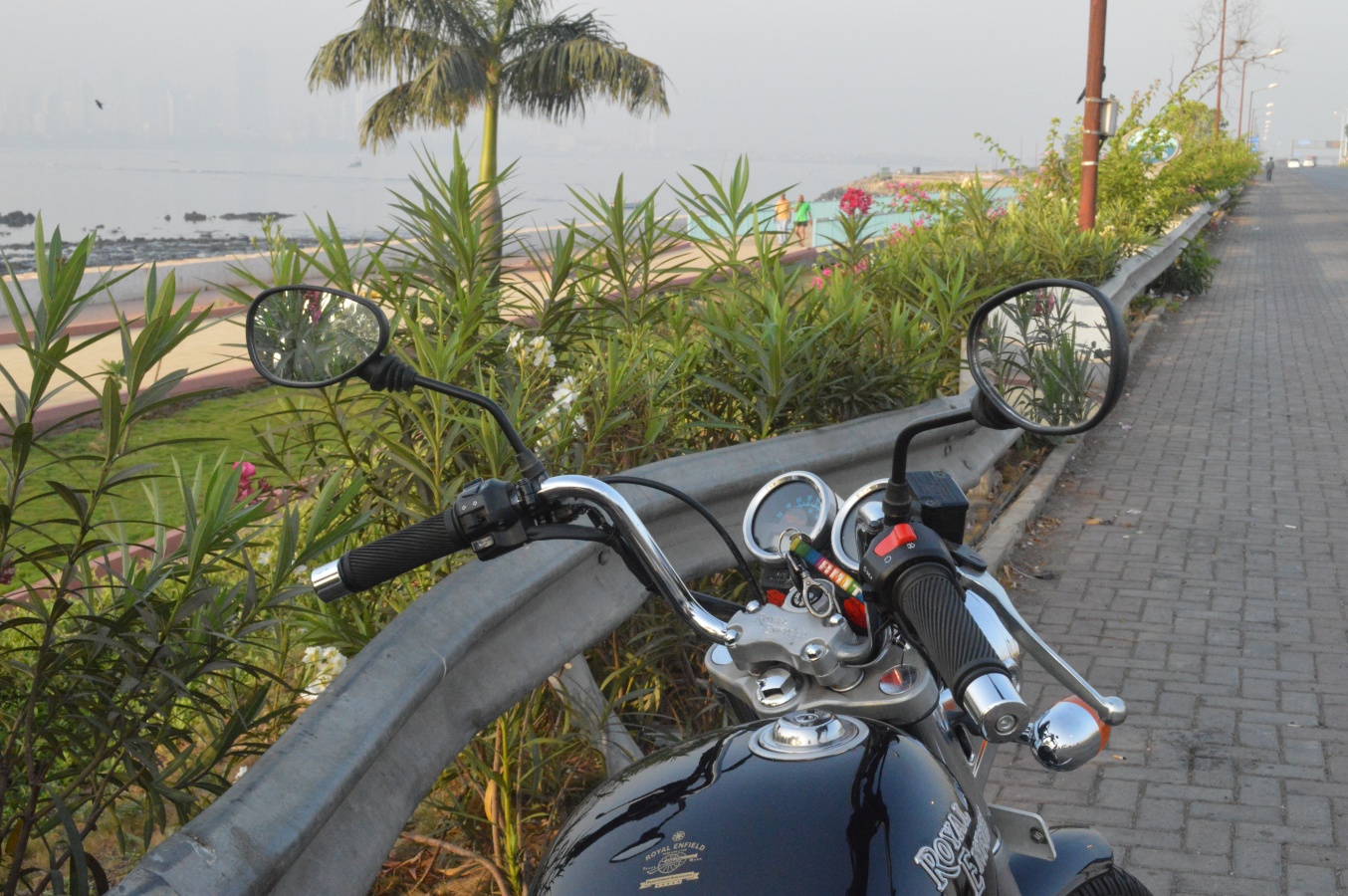 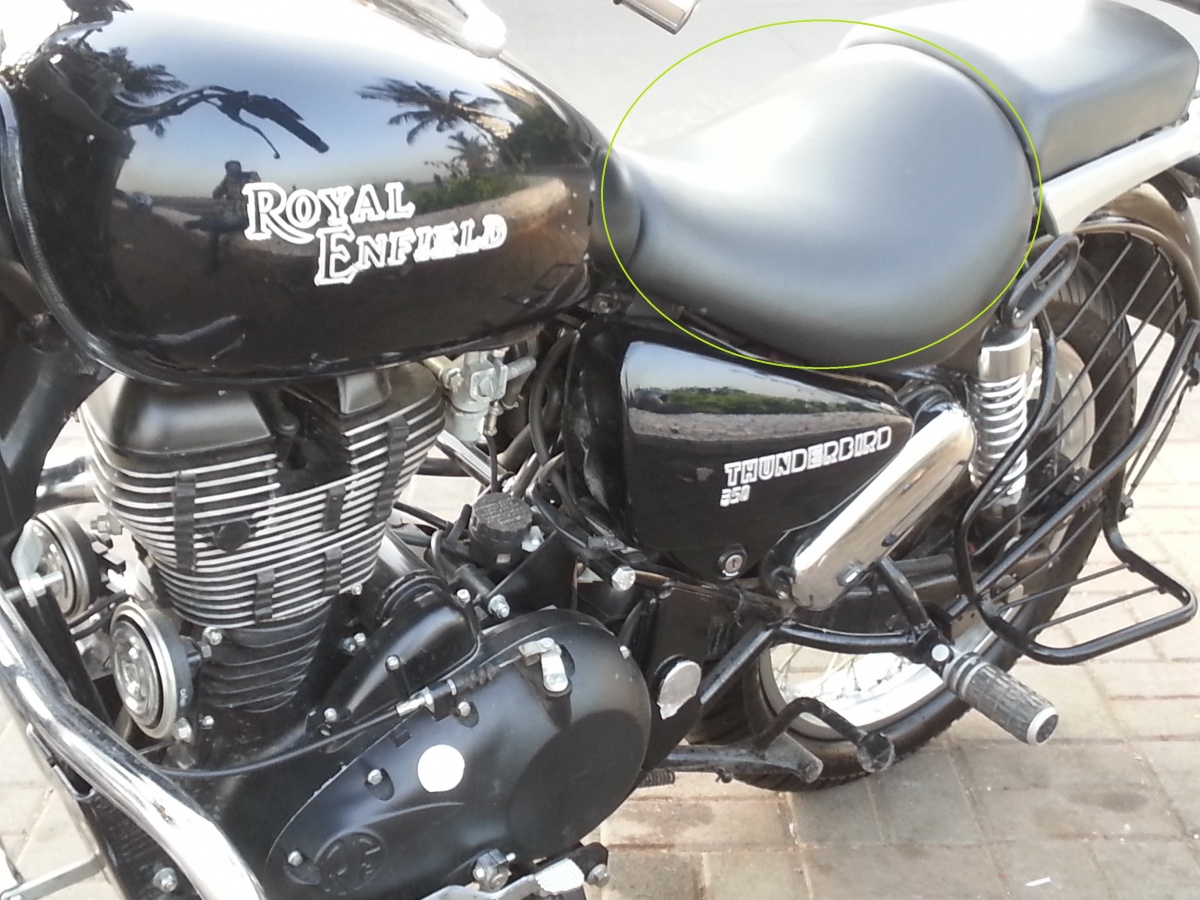 NOTE :- POWDERCOATING HAS BEGUN TO PERISH 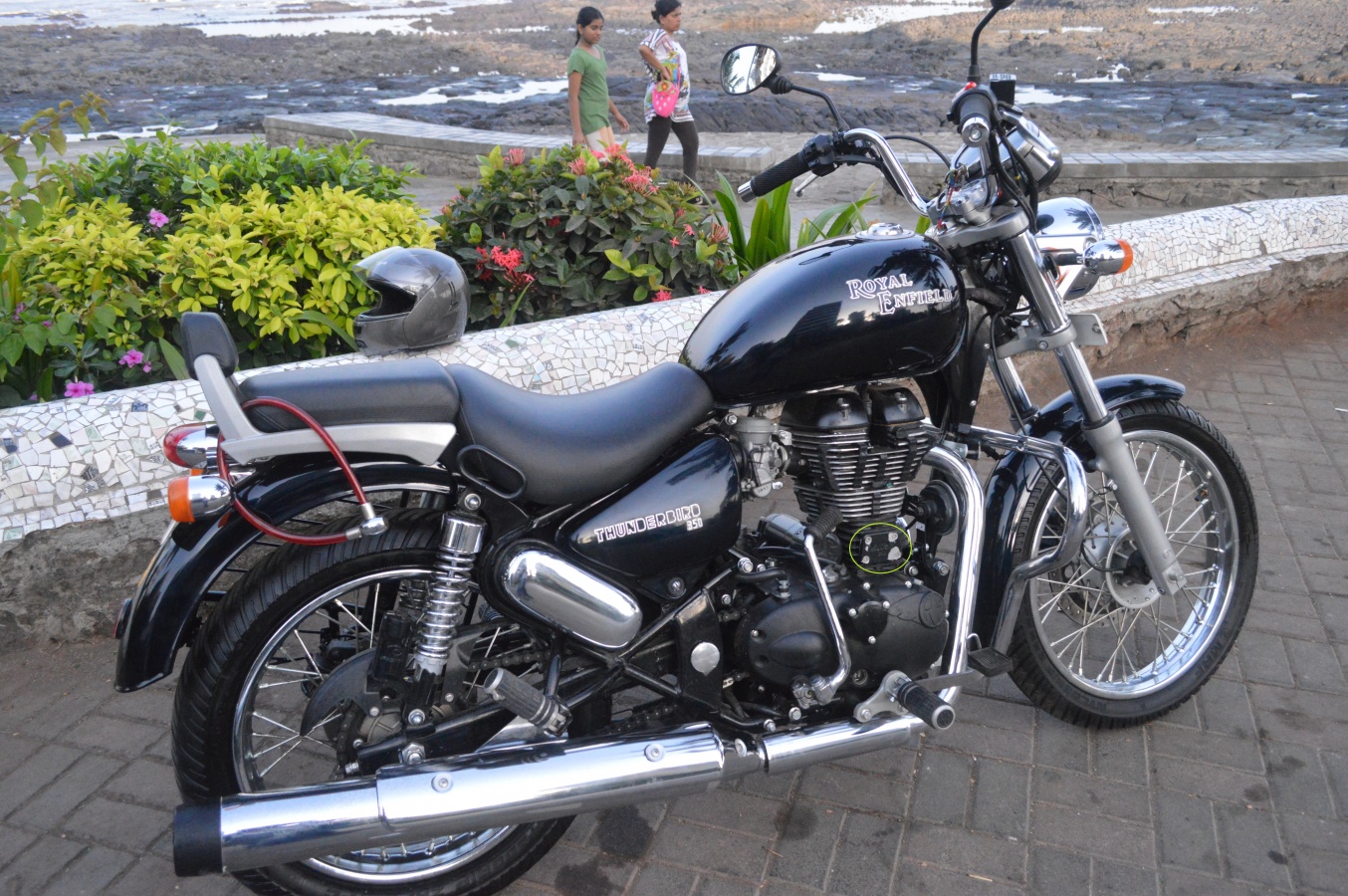 SUSPENSION IS ON THE STIFFER SIDE 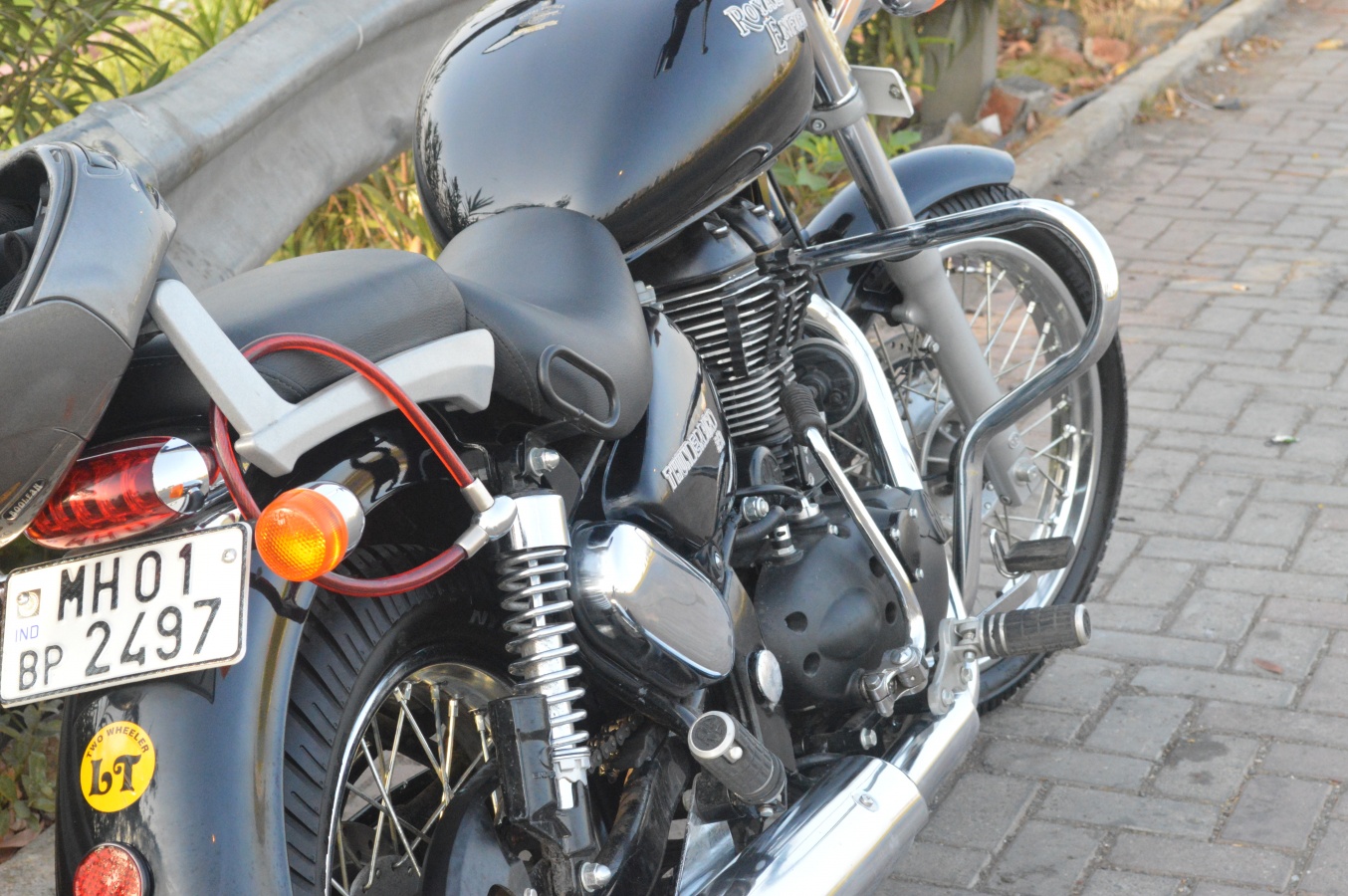 NO FIRING OF A CI BULLET .PLAN TO CHANGE THE SILENCER 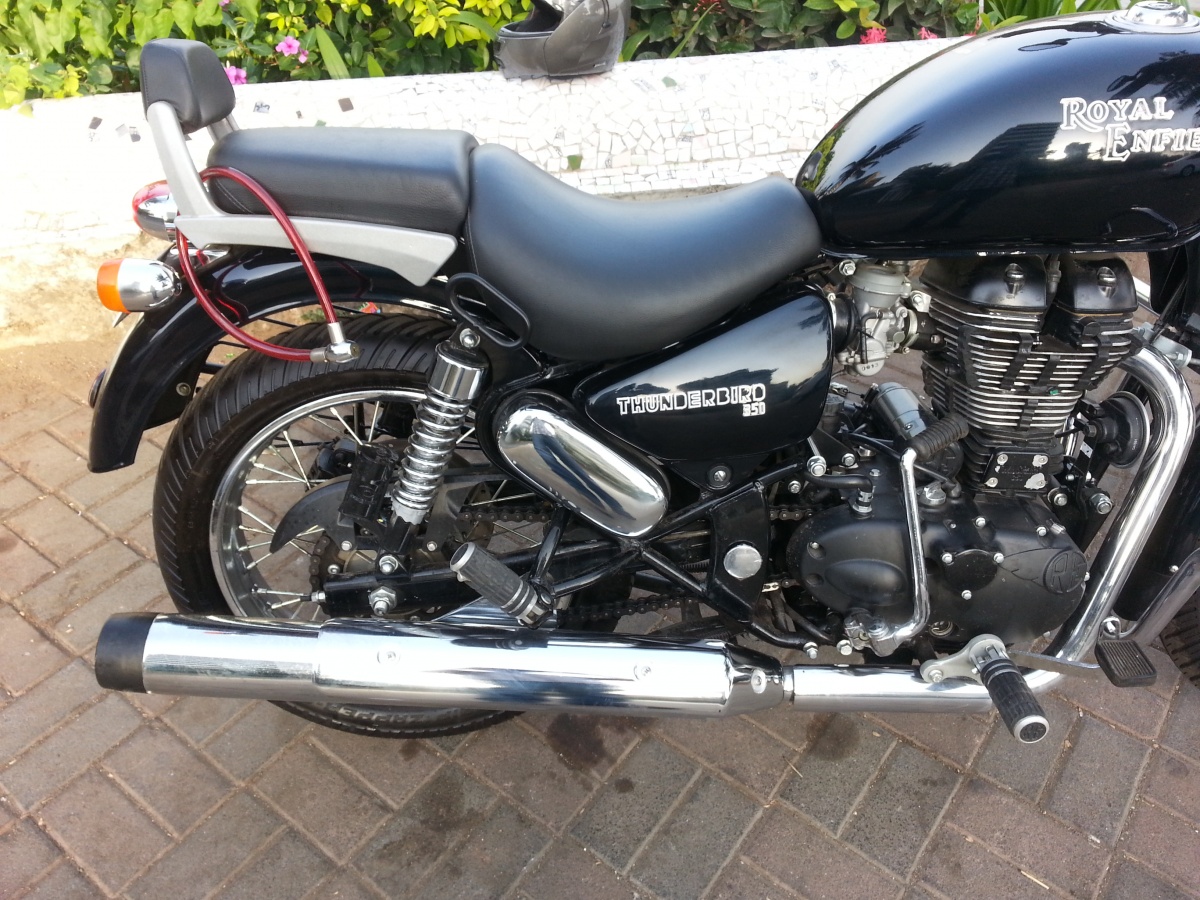 a. Extremely stable bike on highways ,dosen't wobble whenever a heavy vehicle passes by .
b. Good straight line stability,can cruise for hours .
c. Found it good in the hills especially during steep inclines ,my friends Unicorn was struggling to climb and here i was climbing ahead smoothly .
d. Better breaking power than earlier versions of TBIRD .
e. The new looks of the bike .Especially the new speedo console.
f. Good & relaxed riding stance , dosent feel stressful on longer rides.
g. Massive 20 Ltrs Tank for a longer range .
h. Deti kitna hai well around 40 KM/L .
i. Good built quality ,but lots of scope for improvement.

a. Quality of switches ,could have been more better .
b. Quality of paint ,some part of powdercoating on the engine has started to peel off.
c. R.E could have provided alloy wheels and tubeless tyres
d. Wiring at some ends is not insulated . I took an electrical tape and insulated it myself .
f. The crome quality is not best in class .
g. Finding neutral is a problem ,dont expect a honda type of smoothness in grear shifting .
h. The Speedo console rattles like hell , i found a workaround for the same . 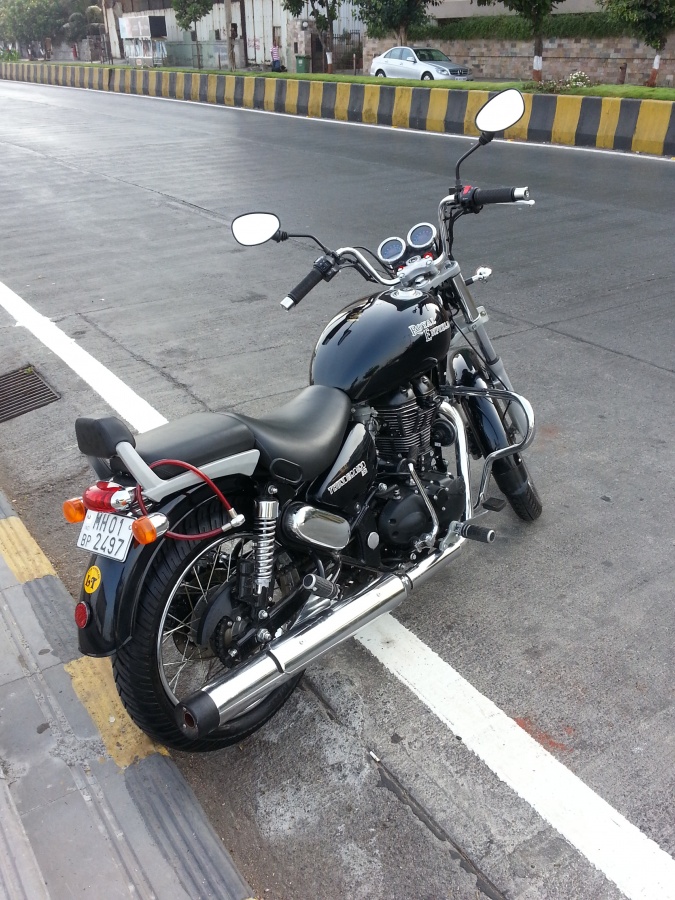 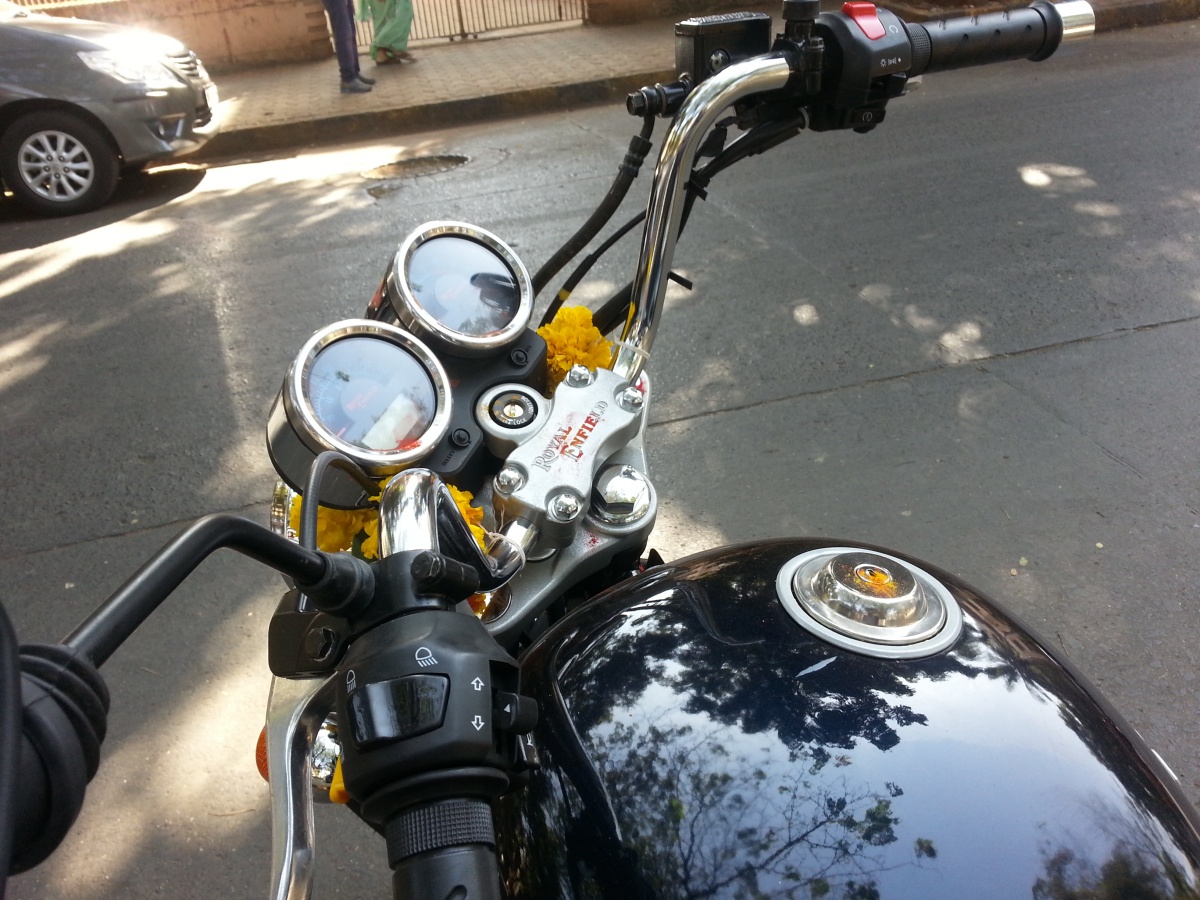 Nice Review, Good Luck and have a happy ownership experience.

The prelude: it felt I am reading my own thunderbird story

Was in the same boat: 350/500, Reading numerous reviews, videos and all that confusion of heart vs brain, getting TB350 in the end.

Congrats for the Beast and welcome to the club

Just noticed, our avatar pics are of somewhat similar pose too

Gosh, your name is Amit too and you are also a SW professional
Last edited: May 7, 2014

COngrats Amit for your awesome buy...

Another Proud owner of RE

Good review. Also, please do share what you did -


amitw79 said:
The prelude: it felt I am reading my own thunderbird story

Was in the same boat: 350/500, Reading numerous reviews, videos and all that confusion of heart vs brain, getting TB350 in the end.

Congrats for the Beast and welcome to the club

Just noticed, our avatar pics are of somewhat similar pose too

Gosh, your name is Amit too and you are also a SW professional
Click to expand...

Yes thats a very nice co-incidence . The world is a small place after all .
Glad that you like the review . Trust me it was very difficult to shortlist on 350CC and let going of 500 variant


tintin63 said:
Good review. Also, please do share what you did -

Yes i will surely share what workaround i did tintin63 . I just got to take the snap of the speedo console .


sanchit350 said:
Another Proud owner of RE
Click to expand...

As promised i did the following workaround for stopping the rattling of speedo console . 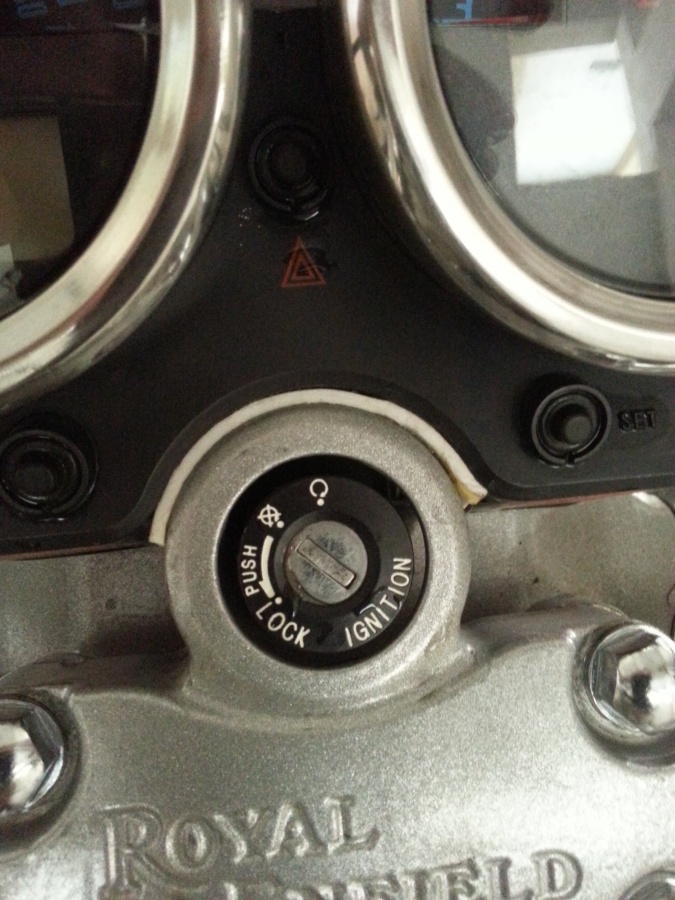 I took a double sided foam tape and 5 RS feviquick
I applied the feviquick on both the sides of the tape and placed it between the gap.
Viola the rattling has gone

As promised i did the following workaround for stopping the rattling of speedo console .

I took a double sided foam tape and 5 RS feviquick
I applied the feviquick on both the sides of the tape and placed it between the gap.
Viola the rattling has gone

I will also try this fix.

Today i changed the gear and break levers of my bike from Silver to Black Colour.
I looks better now.

I also changed the Sliencer of my bike to a silencer provided by Quality Metal Industries Chennai .I must say the roar of bike is fantastic .Its very bassi ,exactly the way i wanted.
Below is the sliencer i am talking about . 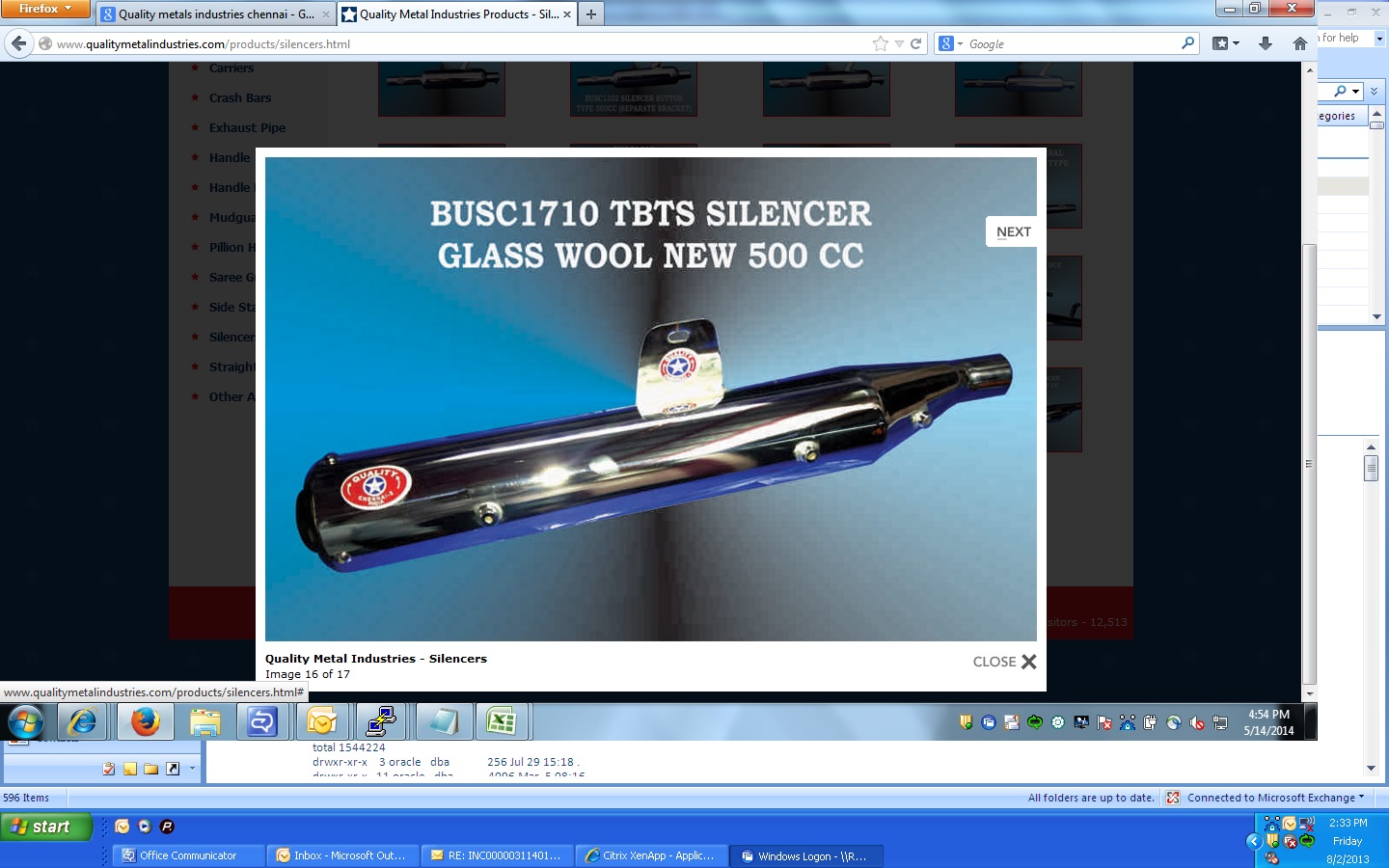 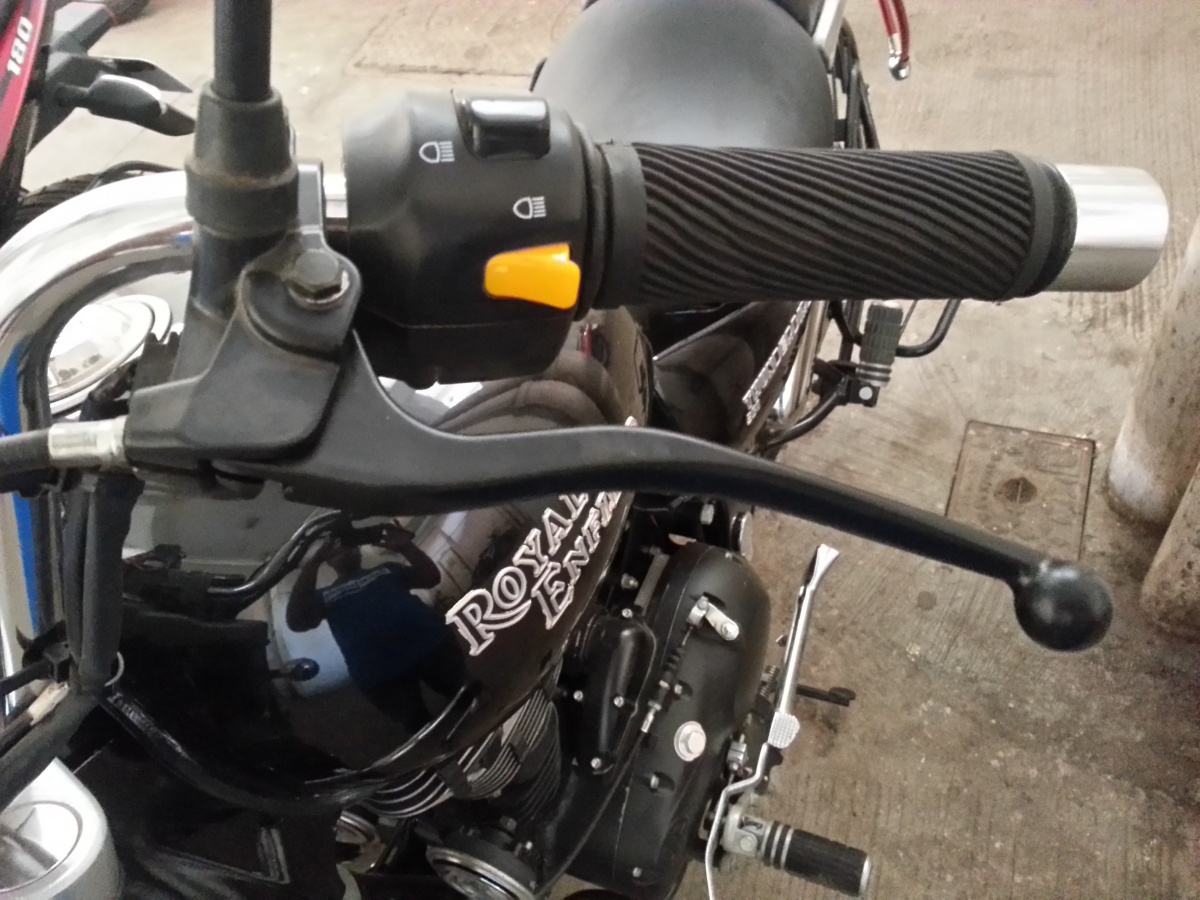 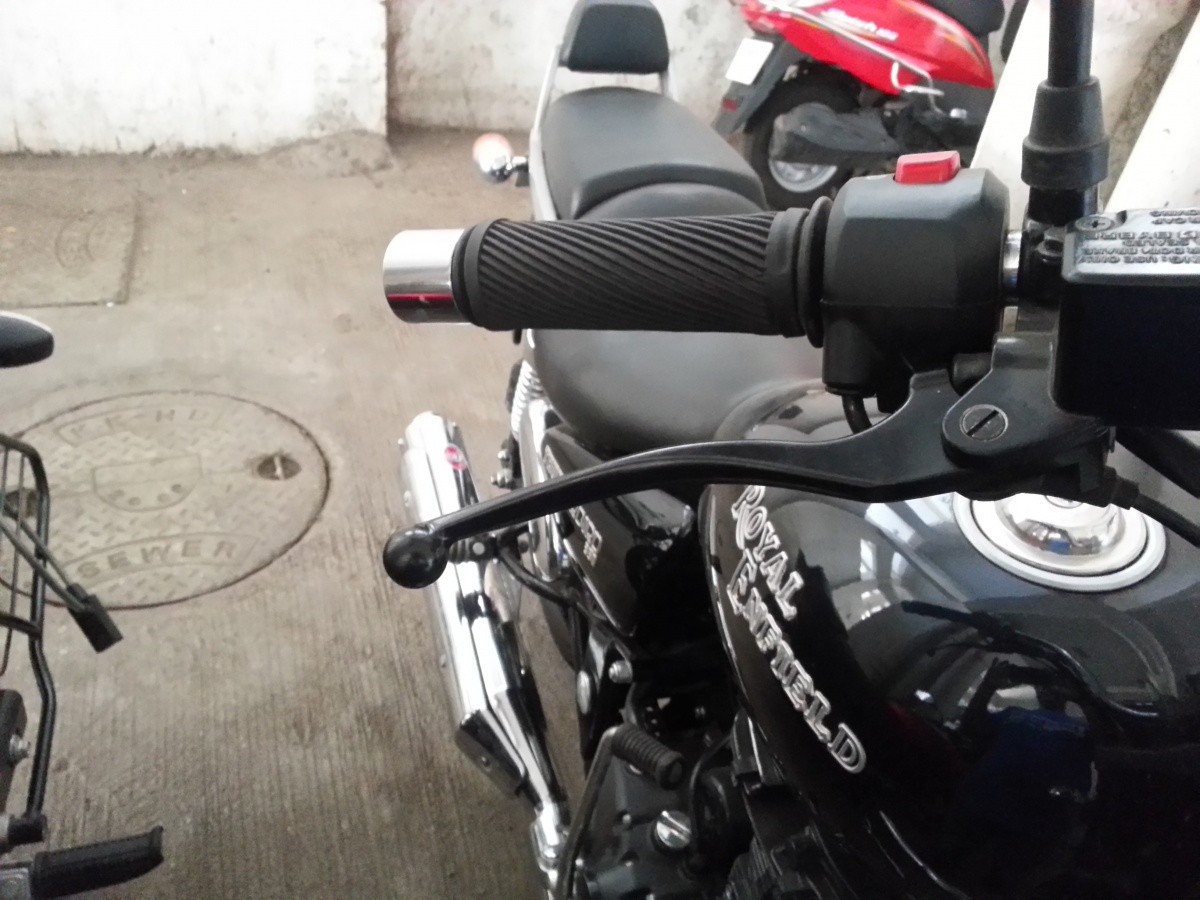 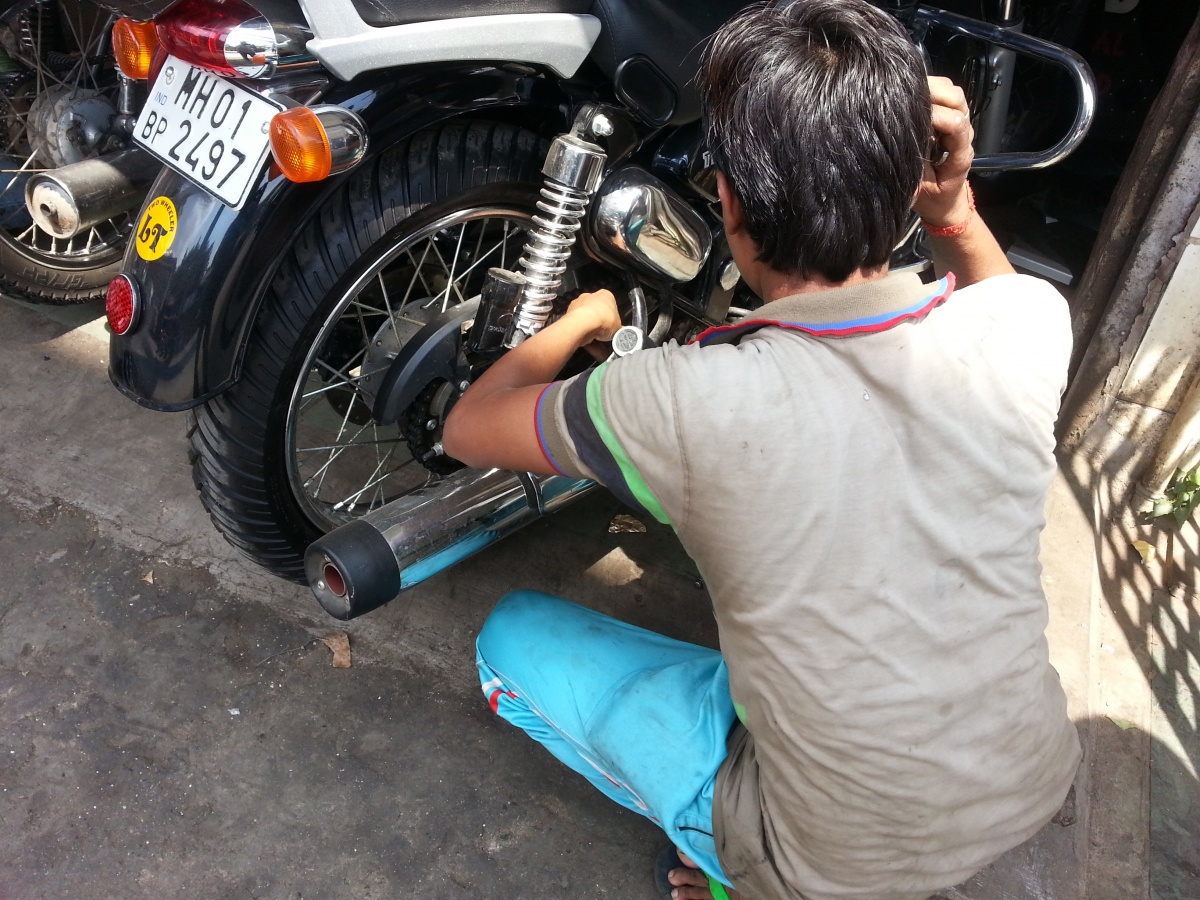 It was a bit difficult for him to remove as the silencer had jammed,thus he had to remove the entire silencer along with the pipe . 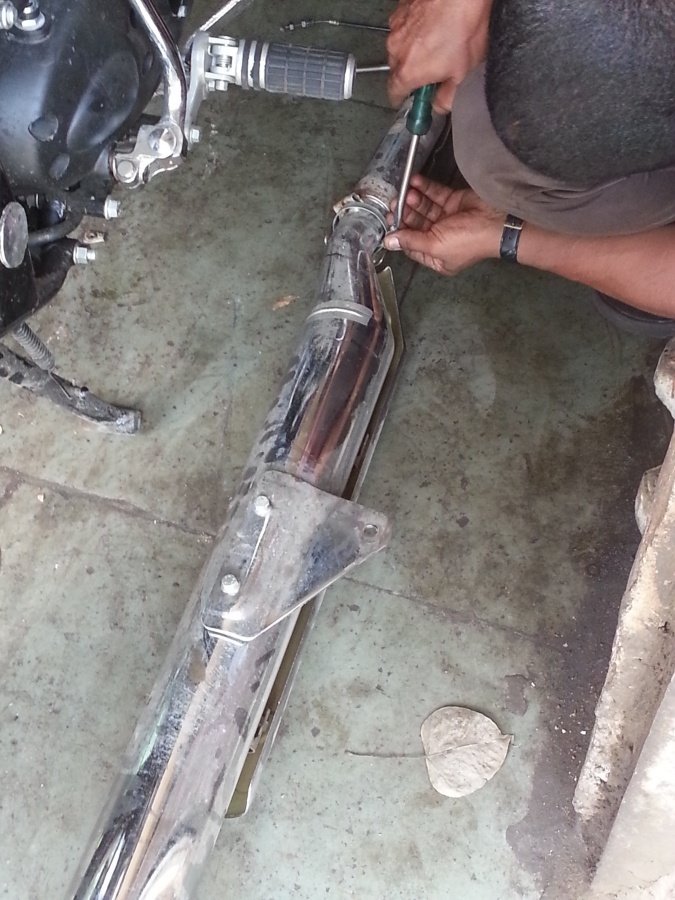 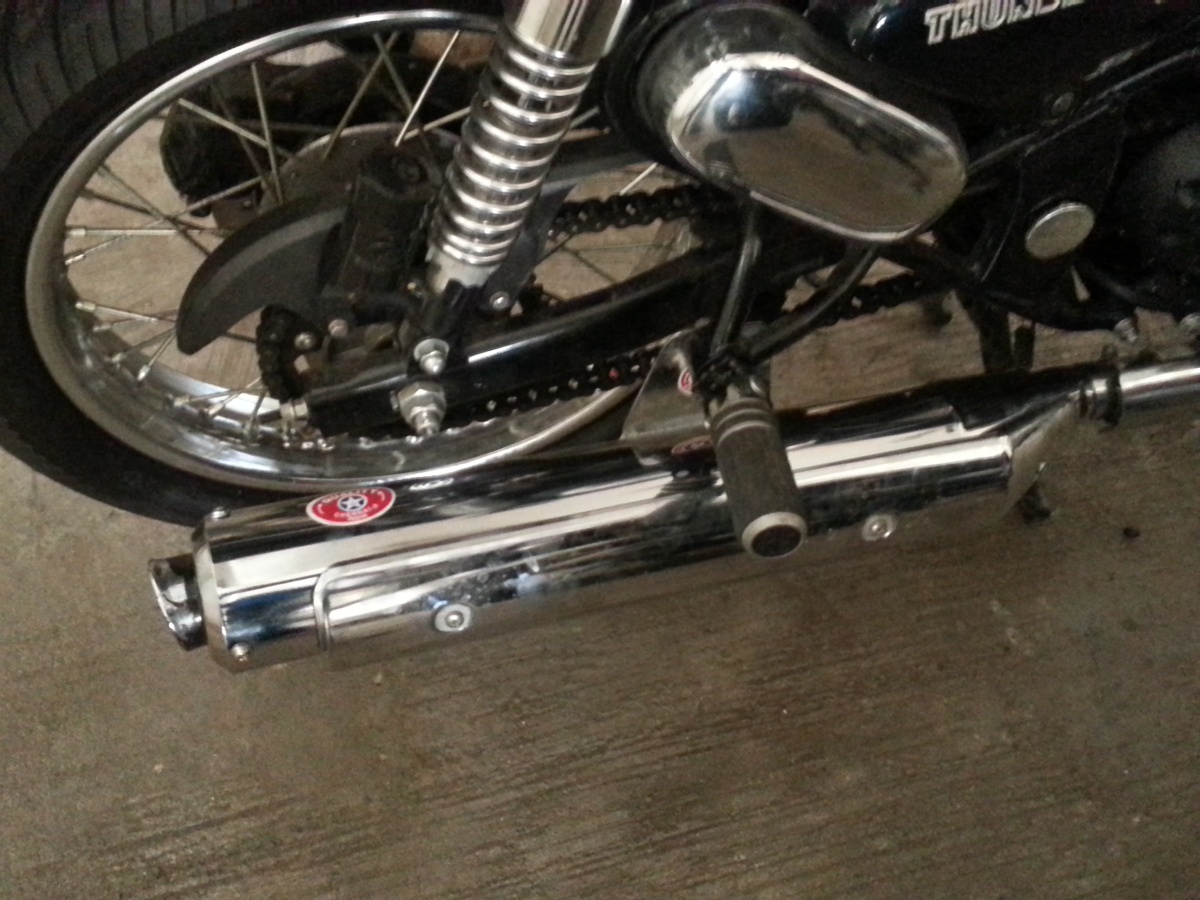 Now for the most important part