Look at the stats mentioned below, it seems the future is electric and it isn’t too far away. Of course, there are plenty of things yet to be worked out and the electric cars will have their own sort of pollution in the forms of discarded batteries and need for electricity which is produced from polluting sources. However, this looks, just… 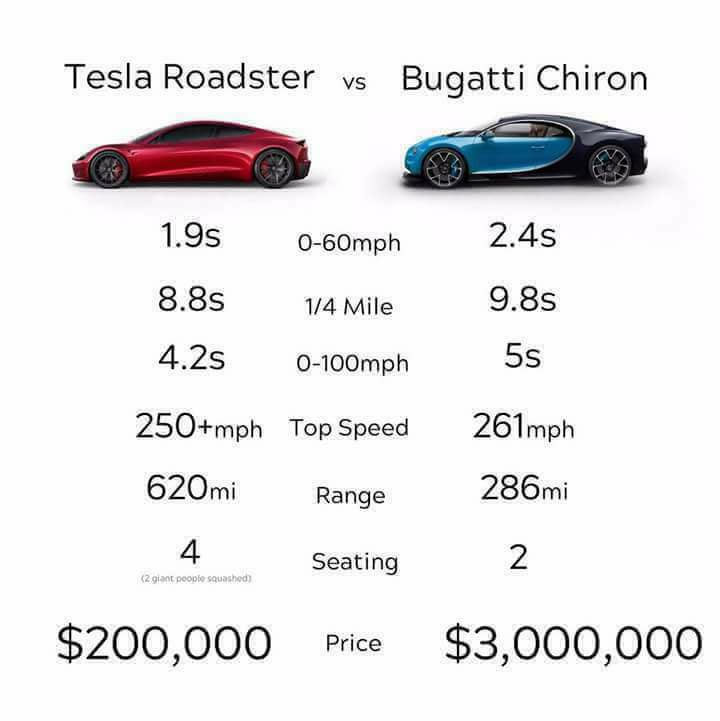 Somehow I am not getting convinced with EVs becoming a mode of transportation for masses.
IMO, solar energy should be the target of authorities to push for mass consumption.

Same here, I would like to see greener sources of energy; else we are just transferring pollution elsewhere.

Having said that, I see solar energy more as a way to supplement grid power at most homes and apartment complexes. In fact I would like to see mandatory usage of solar power at malls, where they have plenty of roof real-estate to implement such a thing.

As a grid solution, I don’t see solar as the way forward. Since it requires large investment and power generation is limited to few hours a day and will vary based on the weather.
M

Future seems it is more Electric.
To some extent it is still working but not in reach of a common man.
Only Battery E-Rickshaw is here.
Cars as for common man is still little far.
May be Google type Auto Pilot Cars will come till then.
But to generate & store electricity some other fuels need to be used efficiently with some patented innovations.
B

Future is mostly gasoline with few alternative vehicles. America has a lot of gasoline/natural gas and it needs to make money off it. It is only electric as long as power plants in the world run on US gas.

Most developing nations do not have the money for infrastructure or even will to create massive unemployment. Just imagine stopping coal mining, replacing gas stations with electric charging stations (you can fill a car in 5 minutes, you cannot charge a car in five minutes), replacing coal-fired power plants with alternatives, retraining car mechanics into servicing electric automobiles.

Most likely the future is hybrid. Besides look at the electric car prices, not many could afford cars at those prices. The real war is against coal and not other sources.
Last edited: Nov 22, 2017

It certainly is, and things will change faster than we think. Remember when mobiles came and people thought it will take decades to replace fixed line phones? Well, it practically happened overnight. Electric cars are not only a cheaper alternative, they are now cleaner and faster. The Indian Govt is already toying with the idea and has awarded the first tender for 10,000 EVs to Tata, while the second tender is still open. Maruti is on heels to launch an all-electric Swift. Petrol bunks and energy companies have started installing charging stations on an experimental basis. These are winds of change.

Of course, this means EVs in the form of Nano and Tigor and Verito (and not Roadsters or JLL) but the shift is inevitable.

On a related, but different tangent, India is an electric energy surplus nation. We produce more electricity than we need, but distribution is a mess. The recent changes have improved efficiencies and further work will only boost the infrastructure.
B

The primary motivation for electric cars is that they provide a cleaner option. Without clean sources, wide adoption of electric cars just means more pollution. Coal pollution is worse than gasoline based pollution. It will take India at least 20 years to get the majority of its electricity from clean sources. Keep in mind that clean sources are not necessarily cheap unless we are getting into nuclear energy, which also requires significant investments and addressing of liability issues.

While there are fast charging stations that are available, it takes 30-45 minutes to charge these cars at these stations. For most people, they will have to charge their cars for 8-9 hours. Now, just look at where people park their cars in India, you need a charging station there. You need to ensure the stability of electric supply and secure the station so that people do not steal electricity. You may need a separate electricity usage meter there as well (for billing). In most high rise buildings where cars are parked away from people actually live, you may need a lot of construction work.

More importantly, the hybrid alternatives (gas-electric) are available for nearly 2 decades in the US. Despite high gas prices, no one likes them. These cars have to be light to increase range. Despite government subsidies, not many takers yet. There are outlandish predictions, but that is how it is in America.

The way I see it is that these whole electric automobiles are government imposition of a product on its citizens. It may not work in the US but it may work in countries where governments tell their citizens what to do and what they should buy.

I have used electric landscaping products (saw, mowers, etc.) and they are a joke. Most gasoline fired equipment will give you full energy till the last drop. Electric equipment drops power by nearly half when 25% battery power is left. This crap may be fine for developing countries. People are used to problems so a new problem may not seem like a big deal. Companies may advertise that cars can go from 0-60 in 2 sec. Try doing that when battery is 25% full and numbers will be way different.

The only electric equipment that works well is the one that is connected to a power plug and not the one that runs on a battery. That is how it is for electric train engines and trams.
Last edited: Nov 22, 2017

EVs are actually cheaper. They might be more expensive to build, but with fewer moving parts they have lesser wear & tear and lower cost of maintenance. The running costs are extremely cheap too. Tata has won Tigor EV bid at less than 1million per vehicle, including 3-year warranty. It sells for a little more than half with gasoline engines.

To be a dominant player in automotive industry, EVs don't even need to replace every car on the street. Gasoline cars are not going to vanish off the face of the earth. But they will depreciate faster and there will be takers for them too until the ecosystem supports their upkeep.

The automotive demand, especially in India, does not work on same dynamics as grass mowers or other equipment. It's technology sensitive and new tech is given high regard, even if it has insignificant practical application. I believe the shift to EVs will be rapid, at least the initial 30% of the market.
B

There is no proof that total cost of ownership is lower with an electrical vehicle. People may argue that running cost is lower but these are clinical numbers. The total cost of ownership is the cost of buying, owning and reselling. You also have to add the inconvenience cost of long charging times. Imagine saying, I cannot come to my office because my car is not fully charged or I forgot to plug my car into the charger yesterday night.

In America, people are much more aware of battery operated things. There are golf carts that run on batteries. There are battery operated cars in stores that are used by disabled people to do shopping. The technology is out there for nearly 30 years. What is the US doing? It is building a Keystone pipeline for getting more gasoline from Canada.

In India, the government is going to mandate electrical car usage so people might call it a great thing. It is as great a thing as demonetization. For those of us who are free, it is not that great a thing. Furthermore, my decision making is not primarily governed by cost. I want a bigger vehicle just because it is also safe. In turn, I want the government to keep the cost of gasoline low.

Some of these things are remenants of Obama administration ideas. He always thought that government can spawn businesses. He gave subsidies for people to buy electric vehicles, he banned Keystone pipeline to increase gas prices in the US, he gave money to create organizations like Solendra and supported Tesla. He even stuck the Paris climate deal. Yet, not many people care about these technologies. These ideas are proven bad ideas when people are free to choose. My electric utility gives me an option to select green sources and I select fossil fuels because they are cheap. Fossil fuels do not generate as much pollution if you use air scrubbers as most electric utility companies do in America. Often times, we miss the competing technologies that continue to develop to counter other alternative technologies. If people in developing countries do not use gasoline then cost of gasoline gets lowered and people in the developed nations can continue to maintain their higher standard of living for a distant future.

The future will be mixed one as you have said. Perhaps more electric vehicles will be seen in developing countries. It is hard to see how the US runs away from bigger and more powerful vehicles. In the end, electric vehicle adoption would be likely driven more by government mandates and subsidies than by the free will of people. The best way to show electric vehicles are cheap is to increase taxes on gasoline. For India, gasoline imports require use of US dollars and there may be a motivation to implement policies favoring the use of electric vehicles.
Last edited: Nov 23, 2017
You must log in or register to reply here.
Share:
Facebook Twitter Reddit Pinterest WhatsApp Email
Top