Cycle rickshaw: A non-polluting mode of transport ignored by policymakers
38,920 views
•Published on May 23, 2013


SUBSCRIBE
In this episode of Ravish Ki Report, we visit several neighbourhoods in Delhi where the cycle rickshaw is a very convenient mode of transport for residents. A non-polluting and cheap mode of transport, it can manoeuver through the narrowest of alleys. Also, Ravish Kumar speaks to several cycle rickshaw pullers who explain their difficult lives and how they make ends meet. [Audio in Hindi] (This episode is from NDTV archives and was aired again as part of the 'NDTV Classics' series.)

Here is some topic which covers in this video:

Open Your Demat account One of the best Provider Zerodha:
Signup and open a Zerodha trading and demat account online and start investing

These reinventing the wheel maniacs should have known that there are ethical rules that will prevent these products from being sold. The product might look good here but this is a generalization of 3-D classic pole balancing problem that is solved in most Fuzzy Logic courses in Electrical Engineering.

So what are the problems? Well, those sensors can fail and cause accidents. Who do you blame then? Human or machine? The code may have bugs. Even human errors will make drivers blame technology. It is typical India. They copy stuff and then claim they have created revolution all the while ignoring the research as to why technology failed to materialize in the west.
B


SUBSCRIBE
Welcome to singh auto zone, in this video i share Don't buy electrical car in 2019 in india,
also share electrical cars in india 2020.
also share reasons not to buy electric cars.
NOTE: ALL THE IMAGES/PICTURES SHOWN IN THE VIDEO BELONG TO THE RESPECTED OWNERS AND NOT ME. I AM NOT THE OWNER OF ANY PICTURE SHOWN IN THE VIDEO.
Click to expand...


SUBSCRIBE
Welcome to singh auto zone, in this video i share Don't buy electrical car in 2019 in india,
also share electrical cars in india 2020.
also share reasons not to buy electric cars.
NOTE: ALL THE IMAGES/PICTURES SHOWN IN THE VIDEO BELONG TO THE RESPECTED OWNERS AND NOT ME. I AM NOT THE OWNER OF ANY PICTURE SHOWN IN THE VIDEO.
Click to expand...

Maruti has invested in a special manufacturing unit specially for Electric Cars to for BS 6 compliant rules. I can see it coming with some impact atleast in big cities specially.
Something is going on behind the scenes. I will try to find out about investment plans of Car companies in new units.
If they are investing in Electric Cars then some model of Charging infrastructure will also be there. Private Shops / Establishments may invest in it too....

Chinese automobile companies step on the gas to invest in India
After SAIC’s Rs 5,000-crore commitment to India, Great Wall Motors set to pump in over $1 billion.
By
Ketan Thakkar
ET Bureau
Updated: Jun 03, 2019, 09.58 AM IST 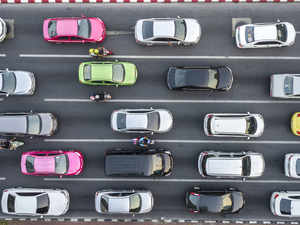 The commitment from Chinese manufacturers comes at a time when their home country, the world’s largest car market, has shrunk for the first time in decades

MUMBAI:
China’s largest utility vehicle maker, Great Wall Motors, is set to invest over $1 billion in India, which is expected to become the third-largest market in the world in the next three-five years. This comes close on the heels of the largest Chinese carmaker SAIC committing Rs 5,000 crore to India.

Great Wall Motors has approved an India unit under Haval India to be headquartered at Gurgaon in the national capital region and the team is being put in place to define the blueprint, said people with knowledge of the matter. The company is also planning to participate in the upcoming Auto Expo in 2020.

Great Wall approved a $1.6-million investment in February to set up the local office, which may be named India Haval Auto, India Haval or India Haval Auto Sales. The final name is subject to approval by local authorities, said a news report.

The commitment from Chinese manufacturers comes at a time when their home country, the world’s largest car market, has shrunk for the first time in decades. Despite a slowing Indian market, they see Asia’s third-largest economy driving their global ambitions, experts said. 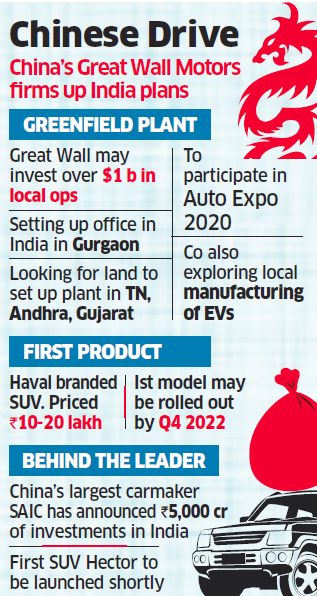 Several people in the know said a senior executive contingent from Great Wall’s headquarters is currently in India scouting for a manufacturing location. Andhra Pradesh, Tamil Nadu and Gujarat are potential sites for the plant, which is expected to roll out its first SUV by the fourth quarter of 2022.

FORMER MARUTI EXEC ROPED IN
Great Wall is likely to follow a similar game plan as MG Motor and may come out with a range of locally produced SUVs in India from Rs 10 lakh to Rs 20 lakh.

While the immediate priority is to look at conventional internal combustion engine vehicles, Great Wall is also exploring electric vehicles for the Indian market, with the company having in-house expertise in making batteries and EVs, said the people cited above.

Great Wall sold 1.1 million vehicles at home last year, registering a marginal decline of 1.6%. However, its overseas sales grew in double digits in 2018, albeit on a low base, to about 50,000 units.

“The immediate focus is to localise some of the Chinese products in the Indian market,” one of the people said, though the existing portfolio is exported to about 60 global markets. “However, over the medium term, there may be a dedicated emerging market architecture, which will be driven by India — approval on the same is awaited.”

The company hired former Maruti Suzuki executive Kaushik Ganguly last year to define its product road map in India. Besides that, it has hired Mainak Chanda to lead overseas procurement. Chanda worked briefly with another Chinese company Changan, in its bid to enter the Indian market, before Great Wall.

Chanda was with Mahindra’s sourcing team before moving to Changan. His presence in the global office could help bolster the India operation.

“One thing is for sure, dynamics of the Indian market are in for a big transformation with new regulations and new entrants like Kia, PSA, MG Motor and now Haval who will change the competitive landscape,” said Gaurav Vangaal, country lead for production forecasting at IHS Markit. “For Great Wall, it may make logical sense to explore acquisition of plants of other vehicle makers which are highly underutilised in the market to get a quick access.”

adsatinder said:
Maruti has invested in a special manufacturing unit specially for Electric Cars to for BS 6 compliant rules. I can see it coming with some impact atleast in big cities specially.
Something is going on behind the scenes. I will try to find out about investment plans of Car companies in new units.
If they are investing in Electric Cars then some model of Charging infrastructure will also be there. Private Shops / Establishments may invest in it too....

Well, this may be how the Indian auto industry dies. You can never trust the government to do its job. The infrastructure will not be there in the numbers and people will not buy as many cars. Everyone will be pushed into buying two-wheelers where people will carry spare batteries. China will also get punished for its investments in India.
B

California had these stupid nanny policies to encourage EVs in the state. Trump is waiving those standards to save traditional auto manufacturing jobs.


Washington (CNN)President Donald Trump announced Wednesday he was revoking California's authority to set its own vehicle emission standards, the latest move in the Trump administration's ongoing fight with the Golden State and attempts to chip away at former President Barack Obama's environmental legacy.
"The Trump Administration is revoking California's Federal Waiver on emissions in order to produce far less expensive cars for the consumer, while at the same time making the cars substantially SAFER," Trump tweeted.
The President made the announcement while visiting California for fundraisers. He was in his hotel in Los Angeles when he sent the tweets.
California's waiver under the Clean Air Act allowed it to set standards tighter than the federal standards, which have been adopted by more than a dozen states and became the de-facto nationwide standard, because automakers do not design different sets of vehicles to meet different standards in different states.


The Trump administration has long been at odds with California, especially on environmental issues. Talks between California environmental regulators and the administration broke down earlier this year. Yet this summer, the state negotiated an agreement with several automakers to design cars to meet standards higher than those set by the federal government.
Gov. Gavin Newsom, a Democrat, said on Tuesday the Trump administration "has abdicated its responsibility to the rest of the world on cutting emissions and fighting global warming" and is acting "on a political vendetta."
The state's attorney general threatened a lawsuit if the administration goes through with the plan.
Attorney General Xavier Becerra said at a news conference following the announcement that the administration's plan is "desperate."
The Trump administration is also working on replacing Obama-era federal vehicle-emission standards.
"This will lead to more production because of this pricing and safety advantage, and also due to the fact that older, highly polluting cars, will be replaced by new, extremely environmentally friendly cars," Trump wrote in an additional tweet. "There will be very little difference in emissions between the California Standard and the new U.S. Standard, but the cars will be far safer and much less expensive."
"Many more cars will be produced under the new and uniform standard, meaning significantly more JOBS, JOBS, JOBS! Automakers should seize this opportunity because without this alternative to California, you will be out of business," he added. 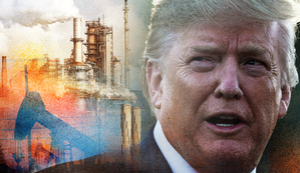 Trump's rollback of climate change regulations will be felt far beyond his presidency
"We embrace federalism and the role of the states, but federalism does not mean that one state can dictate standards for the nation," Environmental Protection Agency Administrator Andrew Wheeler said Tuesday.
The Auto Alliance, an industry group that contends the Obama-era standards were unrealistic, said it would take a closer look at the Trump administration's approach.
"Automakers support year-over-year increases in fuel economy standards that align with marketplace realities, and we support one national program as the best path to preserve good auto jobs, keep new vehicles affordable for more Americans and avoid a marketplace with different standards," said Dave Schwietert, the group's interim CEO and president.
Jeff Alston, who spent four decades at the EPA including in the Office of Transportation and Air Quality, said "there is no legal basis" for revoking the waiver.
"If the courts allow this unprecedented reversal, and the Trump EPA massively rolls back the federal Clean Car Standards, then President Trump will have done more to destroy the planet than any other president in history," said Alston, who is now with the Environmental Protection Network, a group of former agency employees.
You must log in or register to reply here.
Share:
Facebook Twitter Reddit Pinterest WhatsApp Email
Top