Watch in this video - Drag race between Ather 450X VS Okinawa. Thanks For Being Here

For centuries we have wondered if an electric scooter is more fun than a petrol scooter… we are still wondering but a bit less. Because Varun and Shumi took the Ather 450X and the TVS Ntorq, India’s top scooters in their categories, to Circuit 77, a go-kart track in Pune, to have some fun, we mean, to see if they could find the answer. You won’t believe what happened next.


Tata Nexon EV, the electric counterpart of Nexon, is it good enough for you to buy over normal cars with ICE Engines, find out in this video.


Speaking to ET NOW, Sunil Bohra, ED and Group CFO, MINDA Industries says the actual kit value rose from Rs 7500 to Rs 9500 in EVs. With new products in EVs-kit value to rise from Rs 28000 to Rs 56,000, he adds. He believes EV market penetration has grown. He is hopeful of a significant jump in 2W and 3W in the next 5-6 years. He is working with new EV players and also with traditional players. He believes localisation is going to be a big theme for EVs and that localisation will need fresh investments. He claims that the semi-conductor crisis is still ongoing and that he expects it to continue for the next 6-8 months. Watch! Subscribe To ET Now For Latest Updates On Stocks, Business, Trading | ► https://goo.gl/SEjvK3

The future is definitely electric, but we people need to use more alternative ways of producing it like solar panels etc. The prices for normal electricity grew a lot of the past few years, i am reading some interesting info about it on https://Strøm24.no. Did you know that in Norway you can online compare all power suppliers? I found it very and very convenient.
Last edited: Jan 4, 2022
B

This reminds me of the early days of the Internet where you could get a lot of freebies and discounts so that people adopt it. Once everyone gets on board then the price of everything is increased and misery begins.

The most common business strategy is to reduce product lifecycles, which means keep on changing products so that what people buy today gets old ASAP so that people need to adopt new products. You see this in mobile phones and a little bit of this in Covid-19 vaccines too, where new variants come up requiring either new vaccines or boosters.

The attractiveness of electric vehicles for manufacturers is the convergence of business strategy. Once automobiles are electric, digital advances can be incorporated into automobiles and product innovations can be introduced quickly and products could be differentiated. You can have a base price and then you will pay for different features as an extra charge.

Reduced product lifecycles increase a lot of waste and put substantial stress on resources. This added stress makes the future of our planet darker. While we will recover some resources from the waste, the cost of resources will increase exponentially in future resulting in all sorts of geopolitical problems. In the 1980s, there was a theory going on that the US would deplete middle east oil and then rule the world because it has the largest oil resources in the world. America was strategically conserving its oil and using the middle east oil. No one knows how good that theory was, but it cannot be entirely ignored.

The world without oil can never exist. Actually, we have seen that world when oil was not discovered. It was miserable. The whole world population could not even get to 2 billion people until the discovery of oil. Petrochemicals help us increase farm productivity and help feed a nearly 4 fold increase in population in approx. 110 years.
B

So EU is forcing people to buy electric and America just does not like it. If people in America fight for Coronavirus vaccine, there will be a greater fight if government imposes EU type restrictions. I for one will not buy electric vehicle.

The pandemic has been great for electric car sales

Watch: Ola scooter goes up in flames in Pune, worried Twitter users seek answers
Ola has said that it is investigating what caused the fire. The company added it is in touch with the vehicle’s owner, who is safe.
MONEYCONTROL NEWS 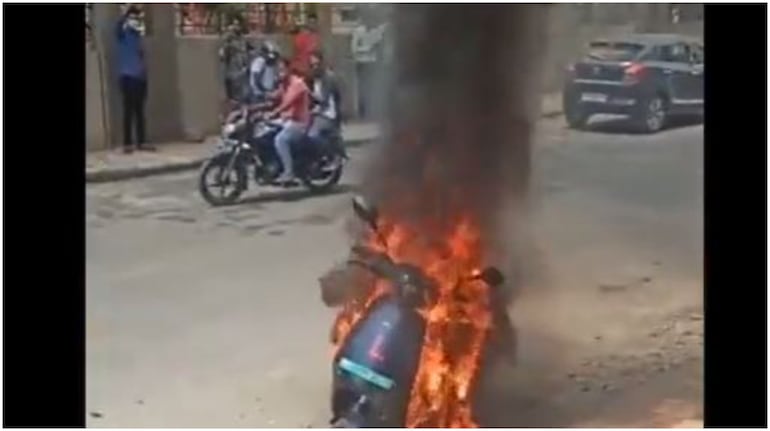 Ola said it will share updates from its investigation into the incident soon. (Image credit: Screengrab from video tweeted by @saharshd)

Videos of an Ola electric scooter going up in flames in Pune have left Twitter questioning the safety and quality of the product within just months of its launch.
One of Ola’s S1 pro electric scooters caught fire while it was parked by the side of a road in the city on Saturday. Videos showed plumes of smoke emerging from the vehicle, and eventually, it was engulfed in flames.

A witness shouted “The battery has caught fire”.
Ola has said that it is investigating what caused the fire. The company added it is in contact with the vehicle’s owner, who is safe.

Overheating of the battery is suspected to have led to the incident. "Please apply cooling system in ola scooter," a Twitter user name Kaushik suggested. In summer, there is not shade everywhere to park scooter."
Hormazd Sorabjee, the editor of automobile magazine Autocar India, said the incident highlights safety issues with batteries. " Ola Electric must investigate and give us answers. Thank God no one (was) injured."

Supercar magazine evo India said: "Ola needs to explain the reasons for the fire and if at fault, tender an apology and refund/replace for the loss."


Some other Twitter accounts said they will now think twice before buying Ola products.
Meanwhile, Ola emphasised that safety was its top priority.
"We are aware of an incident in Pune that happened with one of our scooters and are investigating to understand the root cause and will share more updates in the next few days," the company said. "We take this incident seriously and will take appropriate action and share more in the coming days."