E-Rickshaws are running and Charging Points are private and less but sufficient for the commercial requirements.
Most owners charge at their home.
They have limit of distance.
But business is running.

Even for recharging of battery, it will take extra time to charge.
This is also a big problem.

No such technology is here which empowers to move instantly.
Battery Replacement at places can be a smart solution, but who will take initiative with big investment ?

For smaller cities it can be popular .
Individuals of Big cities can get these as 2nd vehicle only.
Cost of vehicle itself is almost same with conventional fuel type.
This is another reason for not going for these E vehicles. 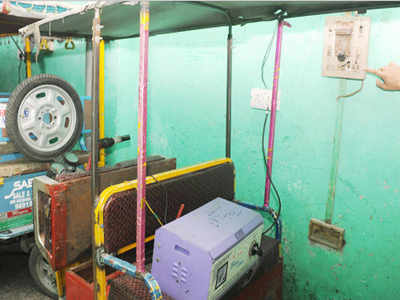 KOLKATA: The rickety cycle rickshaws, which provide the last-mile connectivity in many parts of the city, are undergoing a silent evolution riding on ‘jugaad’, to upgrade from pedal -pushed vehicles to battery-operated ones.

Jugaad — the quintessential Indian word for low-cost desi innovation that has even found its way into the Oxforddictionary — is the driving force that is turning the humble rickshaws into slick motorized vehicles that provide a smooth ride to its users and also ease the rickshaw-pullers burden. 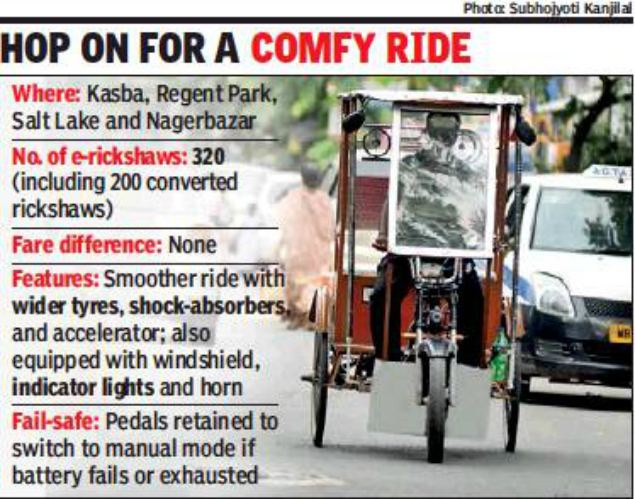 Operating in the streets and alleys of Kasba, Regent Park, Salt Lake and Nagerbazar areas, these retrofitted pedal rickshaws run on re-chargable lead-acid batteries and sport several features that one usually finds in autorickshaws and cars.

These retrofitted ‘e-rickshaws’ come with an accelerator, head-light, tail-light, indicators and even shock-absorbers, to give you a cushioned ride since these motorized ricks run at a fair clip. Some even have wind-shields and cell phone charging points along with a battery charge level indicator.


These latest add-ons that started appearing around a month ago are now being added to more and more such vehicles with their drivers zipping through the streets honking like a car and flashing indicators as they take a turn.


In the Kasba New Market area, almost three out of four cycle rickshaws have undergone the metamorphosis. Ditto with Nagerbazar. In Salt Lake, the ratio is even higher with four out of five now e-rickshaws.


Raja Ram, who now switches on the battery, relaxes in his seat and lets the accelerator to do the trip instead of straining every sinew in his body to cycle with the passenger load, is glad he made the switch.

‘I now make more trips without getting tired’


Ram said, “Not only do I save my energy, I am able to operate even in peak summer heat, unlike earlier when pedalling was impossible in the afternoon. Since the vehicle is twice as fast, I also get to do double the trips that regular pedalpushing cyclericks do.”

The retrofit costs around Rs 50,000 against a factorymade e-rickshaw that costs around Rs 70,000-80,000. A whole night charge that costs Rs 30-35 delivers a daylong service. “I can do up to 80km on a single charge. In the short localized trips that we do, it will never get exhausted in a day,” said Sahadeb Barui, another rickshaw-puller who has gone in for the retrofit.

Barui was initially reluctant to upgrade, fearing he would land in a debt trap to service the high-interest loan he had to take to make the switch to battery. But with everyone else going in for the conversion, he knew he had to take the plunge or get left behind. He did so and has no regrets. “I am earning handsomely. Paying the high interest hurts but I will manage,” he said.

Transport economist Aniruddha Dasgupta felt the evolution was a result of the demography change sweeping through Kolkata neighbourhoods. “People’s lifestyles are evolving. Public transport is getting upgraded. So why not the humble rickshaw? The batteryrun rickshaw is part of the transformation that citizens now demand. The good thing is that it is clean energy that is driving the rickshaws,” he said.

‘E-rickshaw’ boom in Kolkata rides on ‘jugaad’ - Times of India

Funny, they say it is clean energy that is driving the rickshaws. As if these rickshaws were driven by petrol before.

These E-rickshaws are going to make environment situation worse. The disposal of batteries will release lead into Indian air leading to increased cancer cases in future.
Last edited: Jun 29, 2018

Check out the AtherEnergy.com scooter.
Perfect for cities like Bangalore, Pune...

Mahindra has launched Glyde, its own e-mobility solution in Mumbai. Even though press release is sketchy on whether it would be a ride and hail service like Ola and Uber or serving only the corporate clientele.

Having said that, considering the features Glyde will offer to its users, it seems targeted only towards the clientele and even with limited range of 130 km, it ought to be fine, as long as it is doing limited runs during the day.

However, I have to say, the claim of zero carbon footprint while commuting is inaccurate.

Mahindra & Mahindra today announced the launch of Glyd, a premium tech-based e-mobility service in Mumbai on select routes. Dr. Pawan Goenka, Managing Director, Mahindra, flagged off the first batch of 10 e-Veritos, which will now be commissioned in the city. The cars will ply in BKC to begin with and will offer people a solution to reach their homes with no carbon footprints. 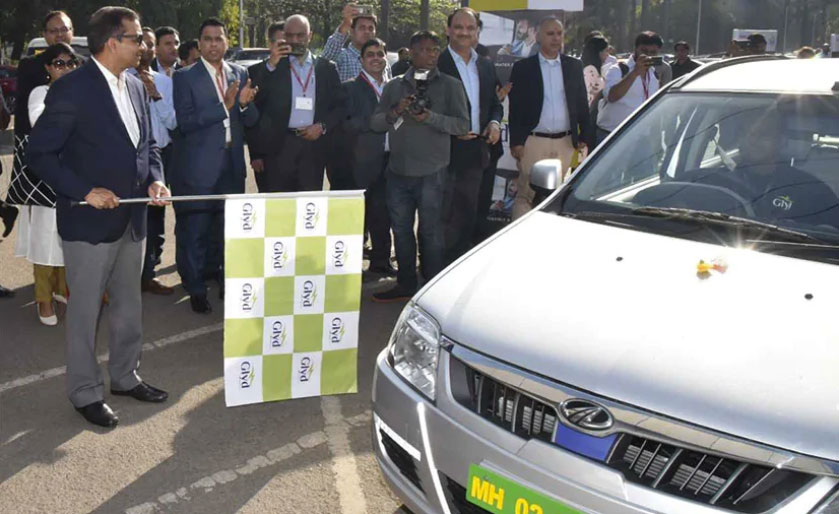 According to company, Glyd will offer a premium in-commute experience to office going executives, powered by several connected car features such as web-conferencing, curated entertainment and music content from selective partners. In addition, industry first features such as privacy screen, air purifier and strain free lighting will provide a one-of-its-kind experience to the commuters. The car will also come with bolstered seats, wrap-around headrest and custom designed armrests. Of course, the e-Veritos will be customised to provide all these facilities.

Dr. Pawan Goenka, Managing Director, M&M Ltd., said, "As the pioneers of electric vehicles in the country, Mahindra has from time to time provided innovative and first of its kind e-mobility solutions. Glyd is one such flagship premium e-mobility solution to redefine the in-commute experience of daily commuters. This is our unique step to drive positive change towards a smart, sustainable and experiential daily commute. Going forward we plan to launch multiple e-mobility solutions, across cities".

Glyd has partnered with Vodafone-Idea Limited, Cisco Systems Limited and other service & content providers to launch these services in Mumbai. The e-Veritos get a range of upto 130 km on a single charge.

Unless we manage to get electricity from renewable sources, nothing is "clean". The only thing it will do is shift the problem somewhere else. You might see air quality improve locally but if the electricity is coming from coal based plants then the problem will shift to areas around these plants which will produce more electricity to supply to these plants.
That being said, the renewable energy potential of India is highly untapped. While we have seen wind energy and solar energy, we are yet to see huge leaps in consuming tidal energy to produce electricity. With a huge coastline, this would be big.

Rohit Kothari said:
Unless we manage to get electricity from renewable sources, nothing is "clean". The only thing it will do is shift the problem somewhere else. You might see air quality improve locally but if the electricity is coming from coal based plants then the problem will shift to areas around these plants which will produce more electricity to supply to these plants.
That being said, the renewable energy potential of India is highly untapped. While we have seen wind energy and solar energy, we are yet to see huge leaps in consuming tidal energy to produce electricity. With a huge coastline, this would be big.
Click to expand...

Nothing is without at least some carbon footprint, whether it is the manufacturing of electrical vehicles or even solar panels. Therefore, claims like these seem preposterous.

Yogesh Sarkar said:
Nothing is without at least some carbon footprint, whether it is the manufacturing of electrical vehicles or even solar panels. Therefore, claims like these seem preposterous.
Click to expand...

Nothing that humans do is clean.
Even solar panels have glass and silicon and other metals and minerals, the mining of which is leaves earth devastated. The motors of electric vehicles use rare earth minerals which a are also often from conflict and/or the mining leaves landscap devastated of bio-diversity and vegetation loss.

I think the really ‘clean’ thing is reduced human population.

Tata Motors has signed an MoU and will be providing Tigor EV to Wise Travel India for their B2B operations in Delhi NCR. Though the first batch of Tigor EVs have been handed over, there is no word yet on how many will be sold to Wise. 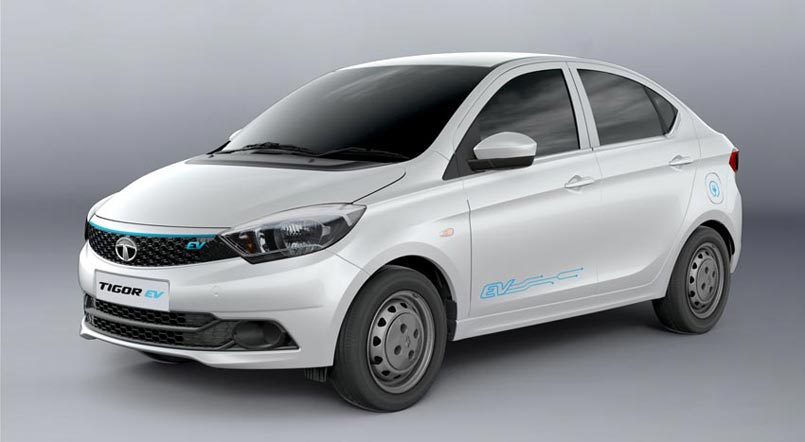 I feel deployment of electric vehicles for corporates makes more sense than electric taxis for the public at large. Since the fleet operator can easily schedule charging to ensure profitability and it would be a good CSR for the corporate clients.


Tata's longest range EV ever comes with a futuristic design 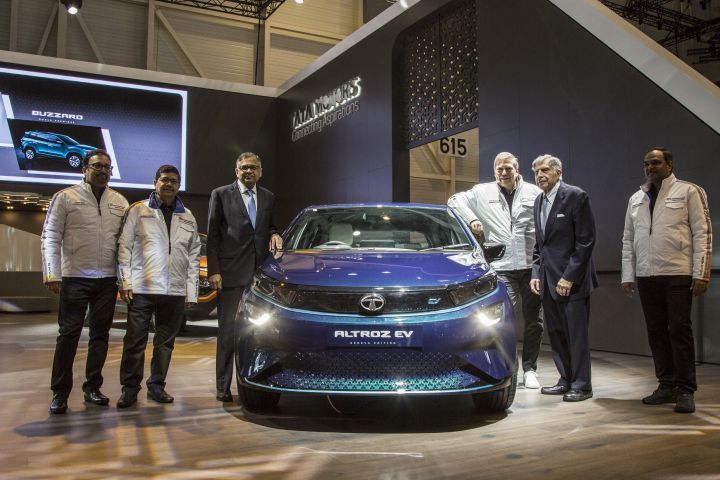 Gallery
Tata Motors had one of its best outings at Geneva this year, debuting not one or two but four all-new cars at the Swiss Motor Show, which opened its doors to world media on March 5. Among the most important cars for the homegrown automaker was the Altroz hatchback, which is all set to launch in India by mid 2019. However, not only did Tata showcase the petrol-powered hatchback, it also presented the Altroz EV.
Based on the same AlfaARC modular platform as the Altroz, the electric version of the hatchback gets subtle differences which make it stand apart. It builds upon the same edgy design of the Altroz with some unique touches like the high-mounted dual LED lamps, a strong character line and different DRLs at the front. It also gets unique dual-tone 16-inch alloys with a futuristic design. Based on the Impact Design 2.0 philosophy, both the Altroz and the Altroz EV get pillar-mounted handles at the rear door and split tail lamps at the back. 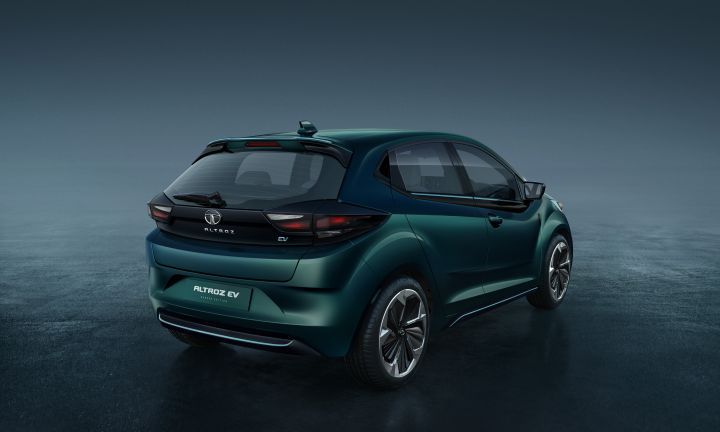 On the inside, things get a lot more interesting. Instead of the all-black interiors on the petrol-powered car, the EV gets beige and black dual-tone interiors. It also has a much larger touchscreen system than the one seen on the Altroz and touch-based controls for the air conditioning unit. However, the biggest addition inside is the rotary style gear knob, inspired from JLR cars. But since this is still a concept, not all features are likely to make it to the production-spec car. 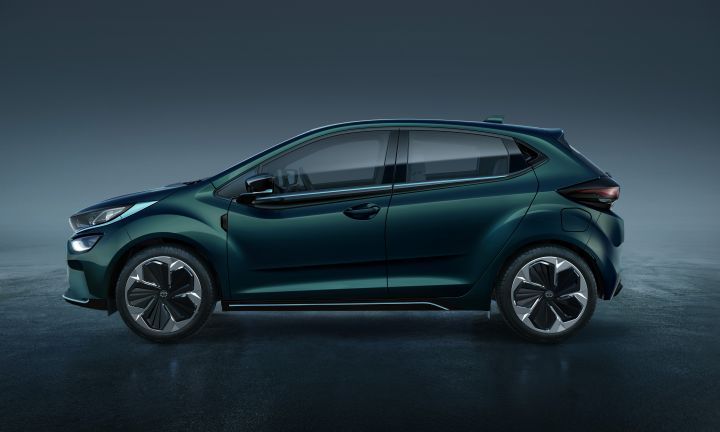 While Tata hasn’t revealed the powertrain specs for the Altroz EV yet, we do know that it will have a range of 250-300km, making it the longest range EV from Tata yet. Tata’s current range of EVs including the Tiago and the Tigor boasts of 130km on a single charge. Tata also claims that the Altroz EV will have fast-charging capabilities and the battery (capacity currently unknown) can be recharged by up to 80 per cent in just 60 minutes. 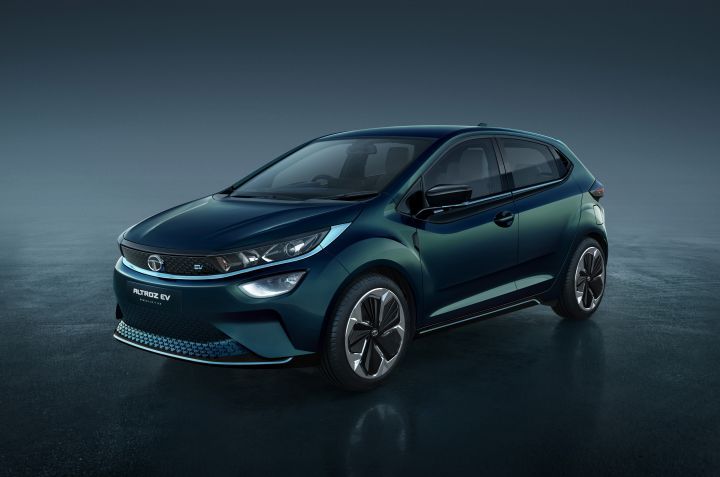 Tata will launch the Altroz EV in 2020, and with the new BSVI norms kicking in in April, we expect the all-electric to land here only after that. With premium features and a longer range, expect the Altroz EV to be much more expensive than the current generation EVs sold by Tata and Mahindra in India.
However, it is likely to be more affordable than the upcoming Hyundai Kona (Rs 25 Lakh) and the Nissan Leaf (Rs 30 lakh) in India, with a price tag closer to the Rs 15 lakh mark. Apart from the Altroz and Altroz EV, the homegrown carmaker has also showcased the 7-seater Harrier (called Buzzardinternationally) and the H2X micro SUV concept at Geneva.