We were done booking our PNQ-SXR & DEL-PNQ air tickets on the 25th June 2016. By then little did we know of what the Indian Army had planned for and executed on the 8th July 2016 by the killing of the terrorist commander Burhan Wani in Kashmir. I am sure though the Indian Army too had not foreseen this unrest that followed this event.

Had read about the unrest that followed the hanging of Afzal Guru in 2010 had lasted for a few months and the reporters having quoted the gathering seen at Wani's funeral to be humongous and a first in history. Doing the math it did seem that the unrest (that apparently is a switch for the separatists to raise and propagate the Separation of Kashmir Issue). Having waited for all this long to plan a trip to Ladakh and having already spent substantially on the air fares all we were left with is to hope for the best that things fall in place.

By the time of flight on the 11th August dayend, not much of the situation had improved. So we had our Plan Z in place and took to the flight and checked in our baggage directly for Srinagar though we had a connection via Delhi.

So going to Srinagar and having our own view of the things around there before making a turn around into Plan Z was the unanimous decision then.

Srinagar came at 6.30 am odd after a scantily occupied DEL-SXR 6E flight.

It was our first time into the valley, We already had starting liking Kashmir after the aerial sunrise views we got to see. We had a sense of the situation out there given the occupancy of the A320 being 20-30 against a full capacity of 180. Out of the airport and we were (no so) greeted by the JK police and CRPF armed personel. Took a cab to the TRC (Tourist Reception centre) that is the nucleus for visiting tourist. To start with the cabbie was quite friendly and helpful;narrating his side of the story; negotiating his was through the police and CRPF vans,canters & jeeps starting their day and taking positions for the day that was FRIDAY. Laying of barbed wire at crossroads being carried out by the police as the start of Curfew to be imposed from 0800 hrs was the goosebump evoking scene we witnessed as our qualis made to the TRC. At TRC, the JKSRTC Delux that leaves for Leh aound 0730 Hrs had been cancelled for the next 3 days. No Force Travelers were lined up for departure. Out of the 2 cabwalas that were ready to take us to leh. We (had to) narrowed down on one. Got all the Luggage tied up on the overhead carrier on the Tavera and set asail.
Only having to make a U-turn in 15 minutes as the novice driver sensed trouble on the road we had to take out of Srinagar.

(to be continued)
(Would be writing this long one in pieces everyday over the next few days as and when time shall allow. Apologies in advance as is don't intend to bore anyone with the tortoise pace)

So you completed the trip safely. Waiting to read how you got out

Srinagar:
After having to return to the City after taking the outward route towards Leh due to the driver sensing trouble and hence he convincing(read Scaring) us of the effects that might follow if we coax him to continue ahead and if the vehicle was caught amidst mob or the security personal halt him. He downloaded the luggage from the overhead carrier and left us along the Dal lake road asking us to take one of the house boats to stay for the day and that he would be back by midnight to continue with the journey and he zoomed away
With 2 options
a. Agreeing with him and staying put until midnight expecting him back
b. Heading back to the airport and flying down to Delhi

We chose the former with a decision that if we were unable to get out of Srinagar that night we would take the morning flight to Delhi,head to Spiti. Took to a house boat with the owner of the houseboat who was lingering around when we were offloaded.
Took the shikara to the parked houseboat and obviously decided to rest for a few hours before the day could unfold.
By 2pm we were up and awake, in the balcony of the houseboat we were greeted with empty street(VIP road), Pro Azaadi Slogans could be heard clearly being voiced from the loudspeakers at a distance.
The son of the Houseboat owner was around along with few of his friends and we had the comfort of long hours to chat about how and what of Kashmir. Primarily before i narrate the little of the 2-3 hour chat, I'd like to mention that I have come to conclude that Kashmiri people are nice when it comes to dealing with tourists,is what I experienced.
(Aaj bhi 100 se jyada log ghayal hue protest me, ye rukne wala nai; par ab piche hate toh 2010 ki tarah fir sab theek lagne lagega aur fir koi baat nai hogi azaadi ki.)
Of what I could sum of the not so easy-to-understand situation was their demand being Retrieval of Armed forces from Srinagar,Talks with the extremists and no to the use pellet guns.
To sum on the Kashmir issue and get back to travel, I've tried but failed finding an answer to this: 70 years post Independence and yet India has failed to gain the confidence of Kashmiri people as being one of the whole of India? Why and how is the Indian connect so feeble that the people would want to consider an option?

Anyways amidst the chat we had the Uncle called us for the lunch that was served around 4pm and we were nicely treated to Chicken on the houseboat diner.
Never had I thought we would be staying on a Houseboat, but i am happy this leg was annexed to our trip. If what the owner had to say was righteous then each of this beauties cost nothing less than 2 crores. And yes, they are a amazing piece of art.
Here are a few pics of the houseboat 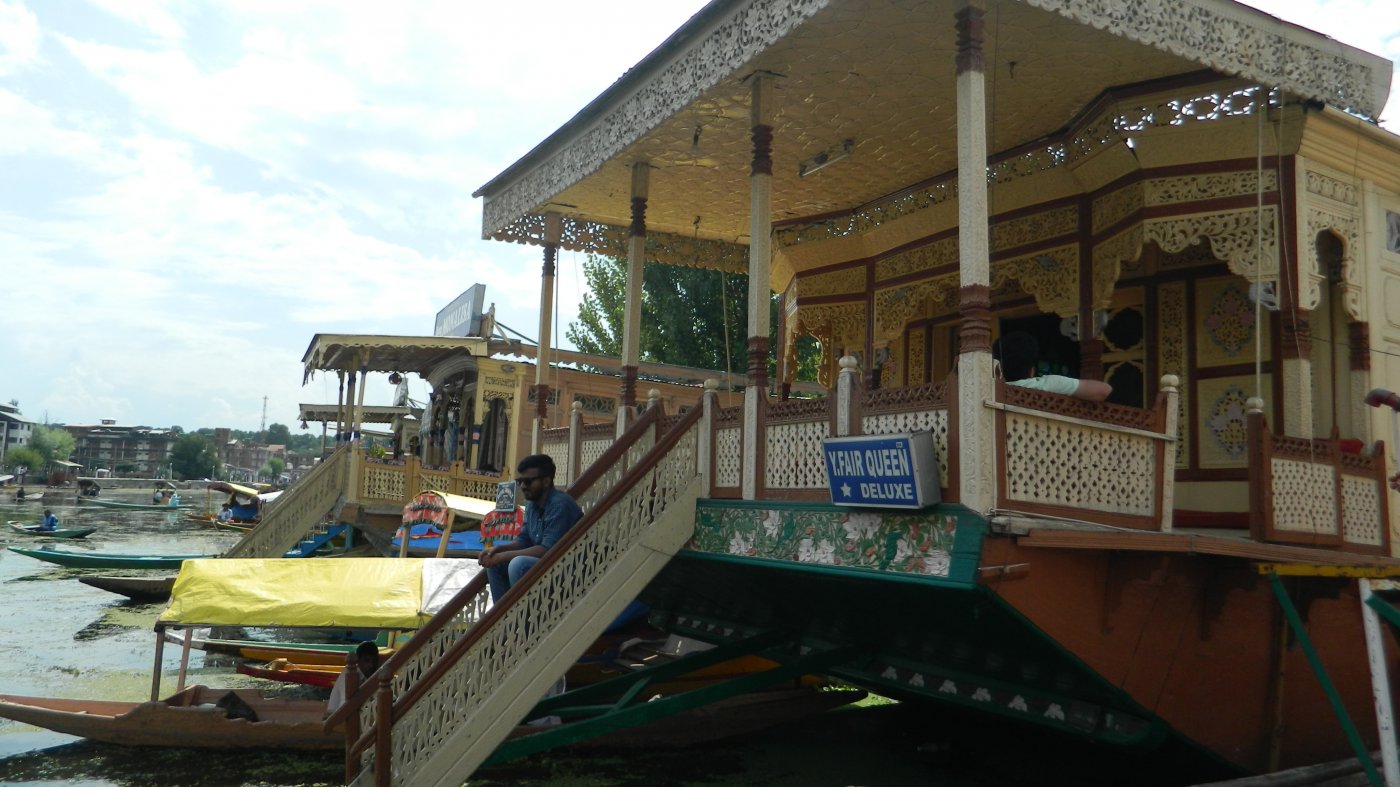 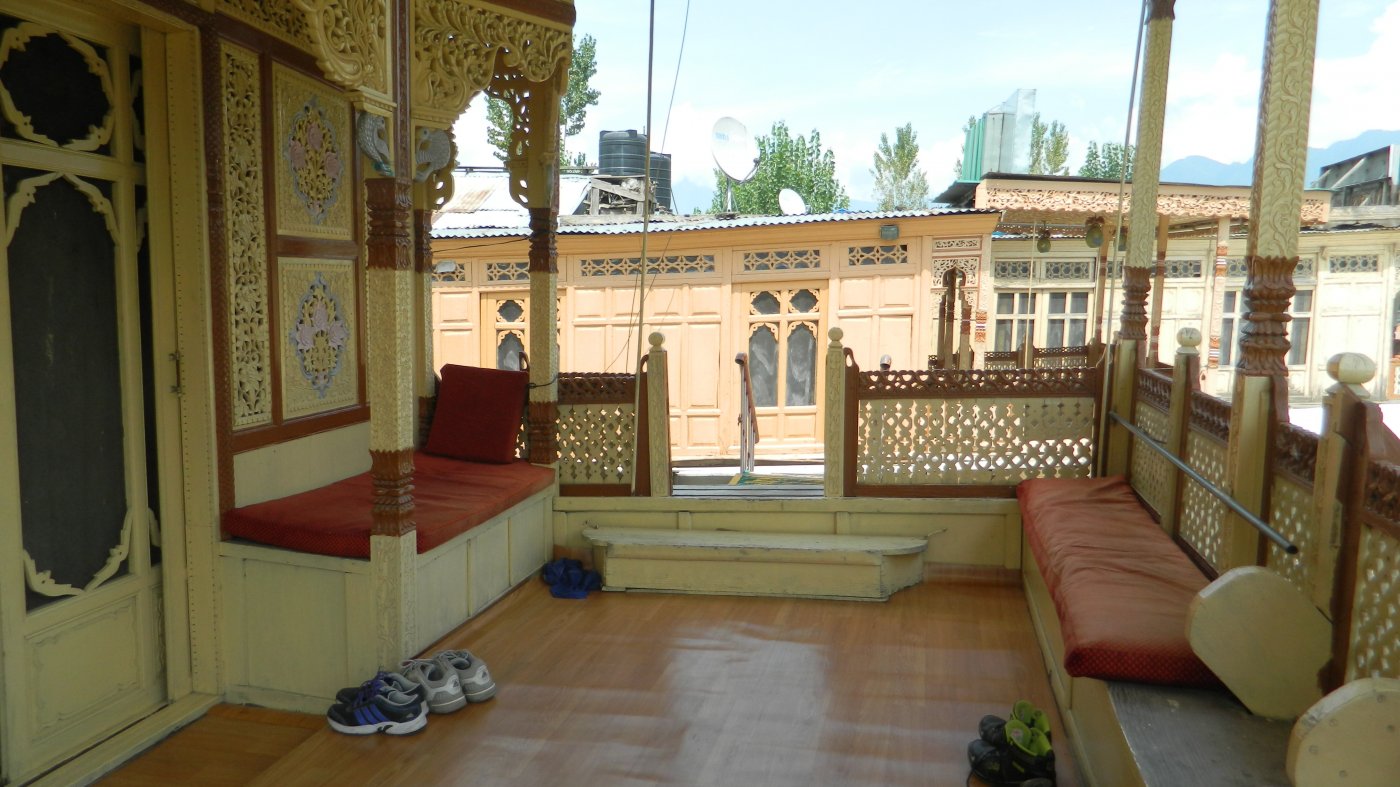 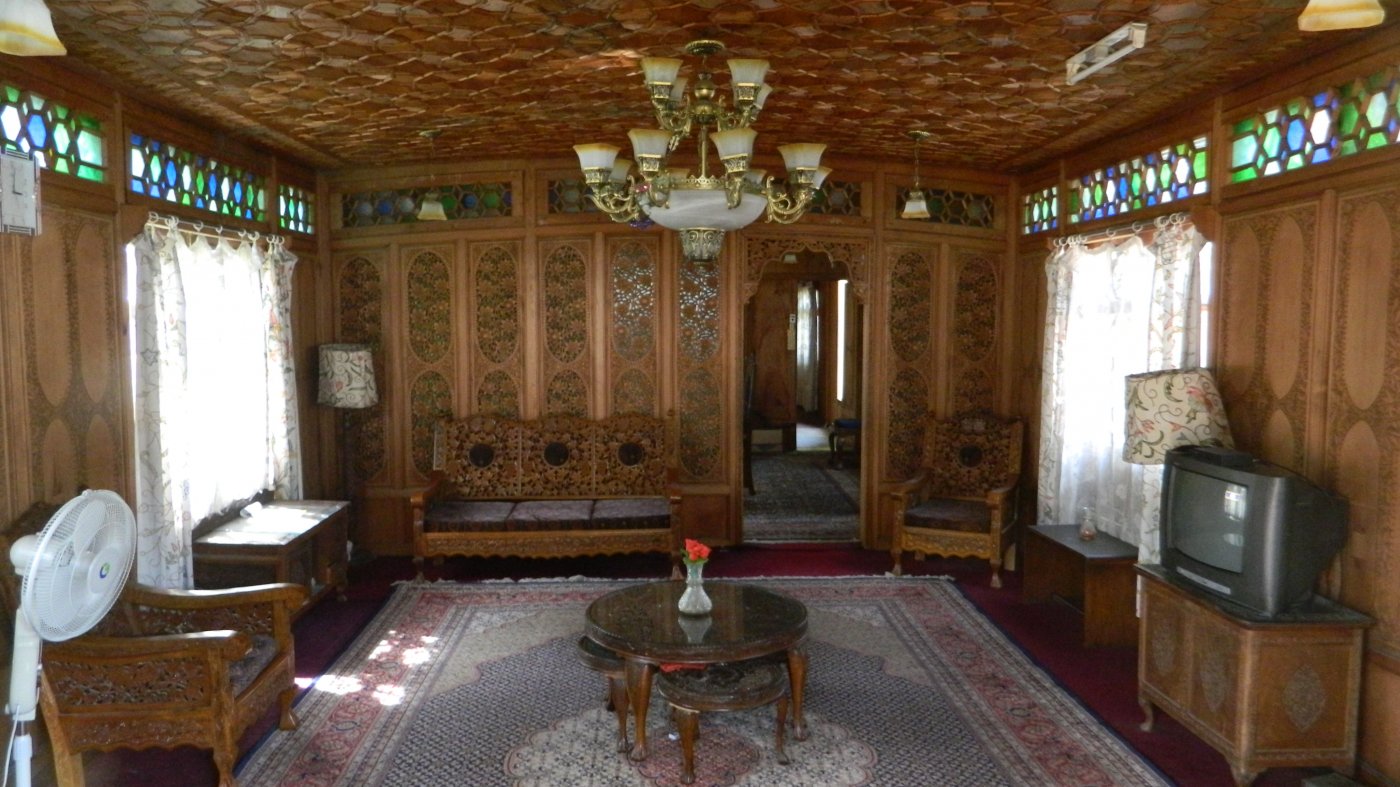 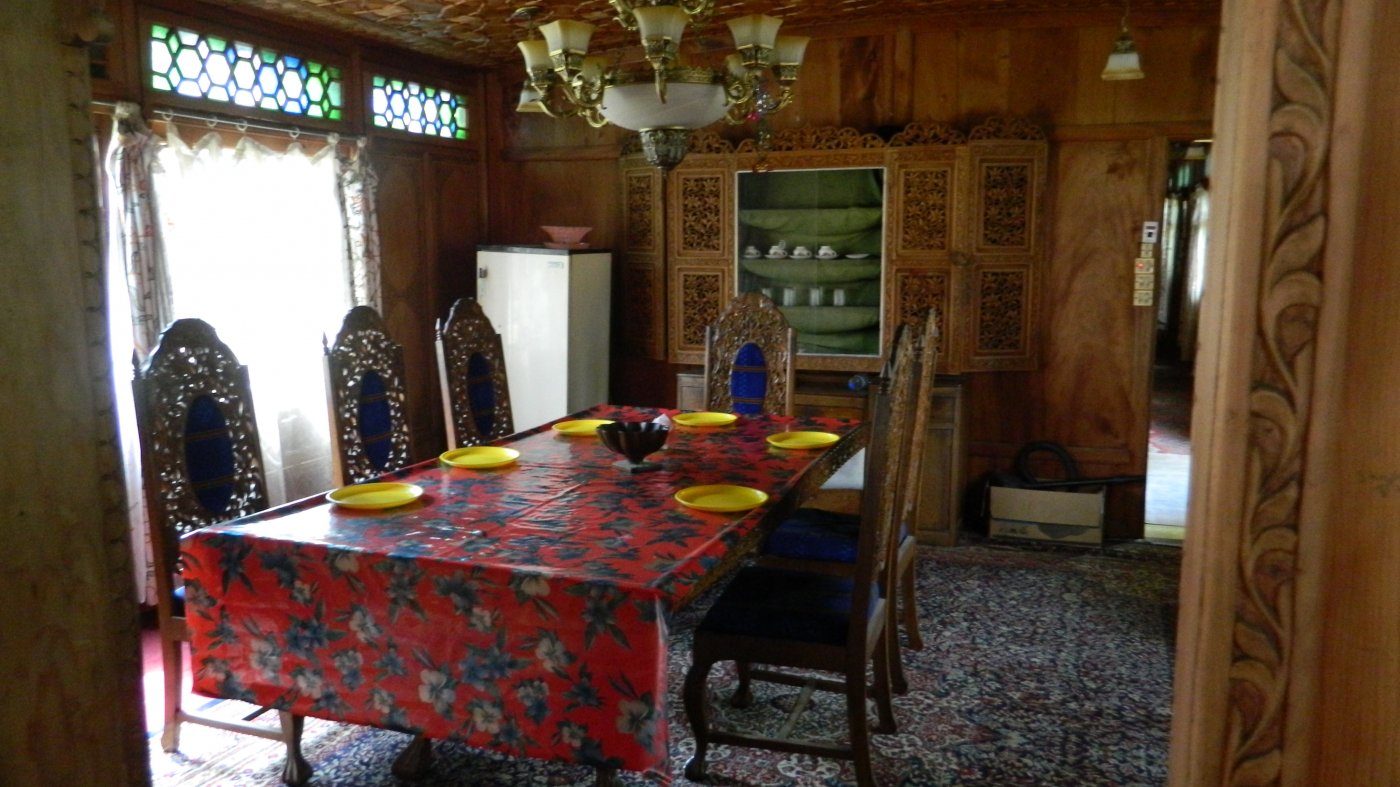 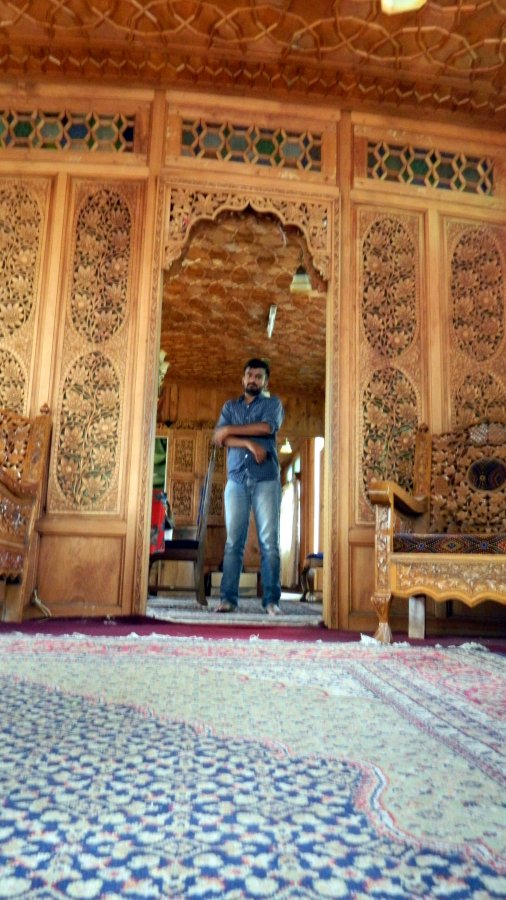 The Verandah of the houseboat- 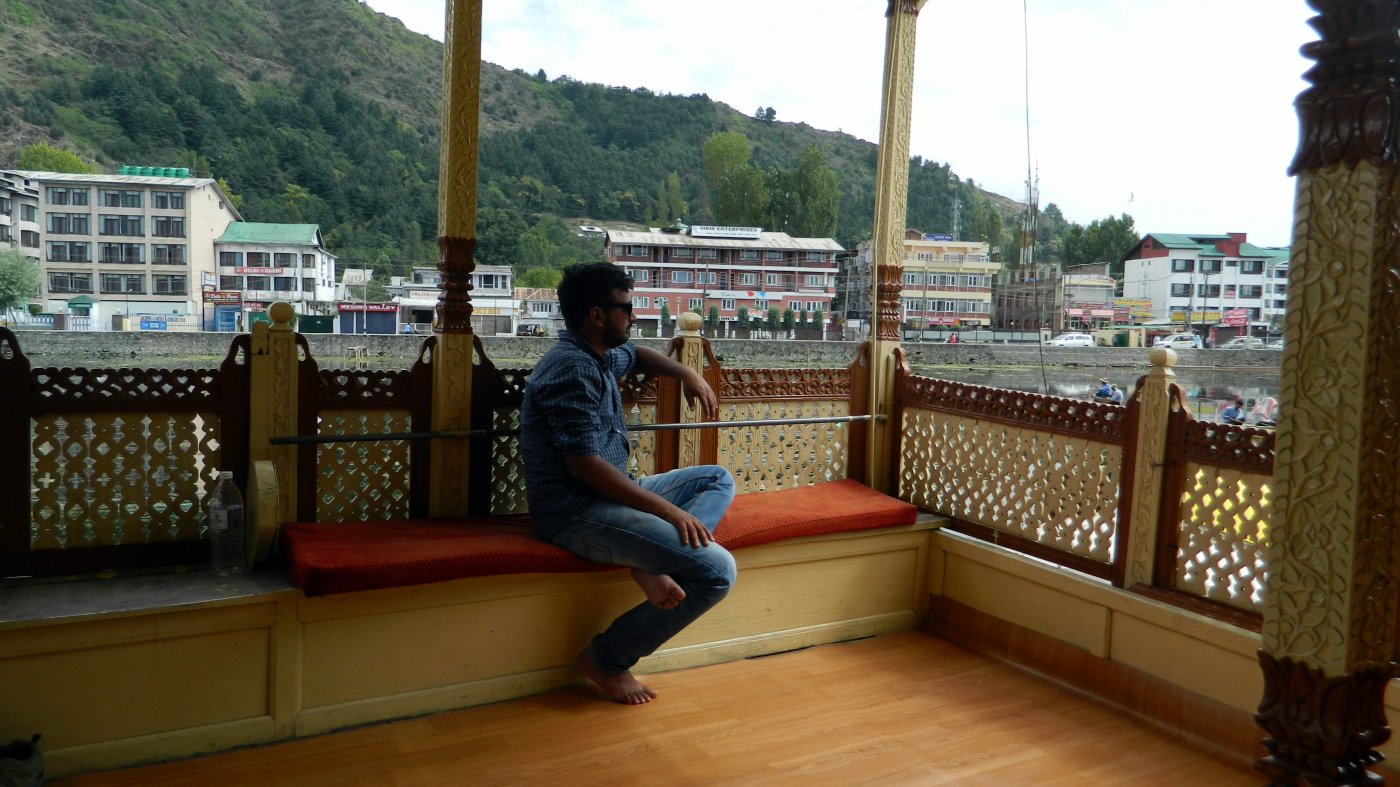 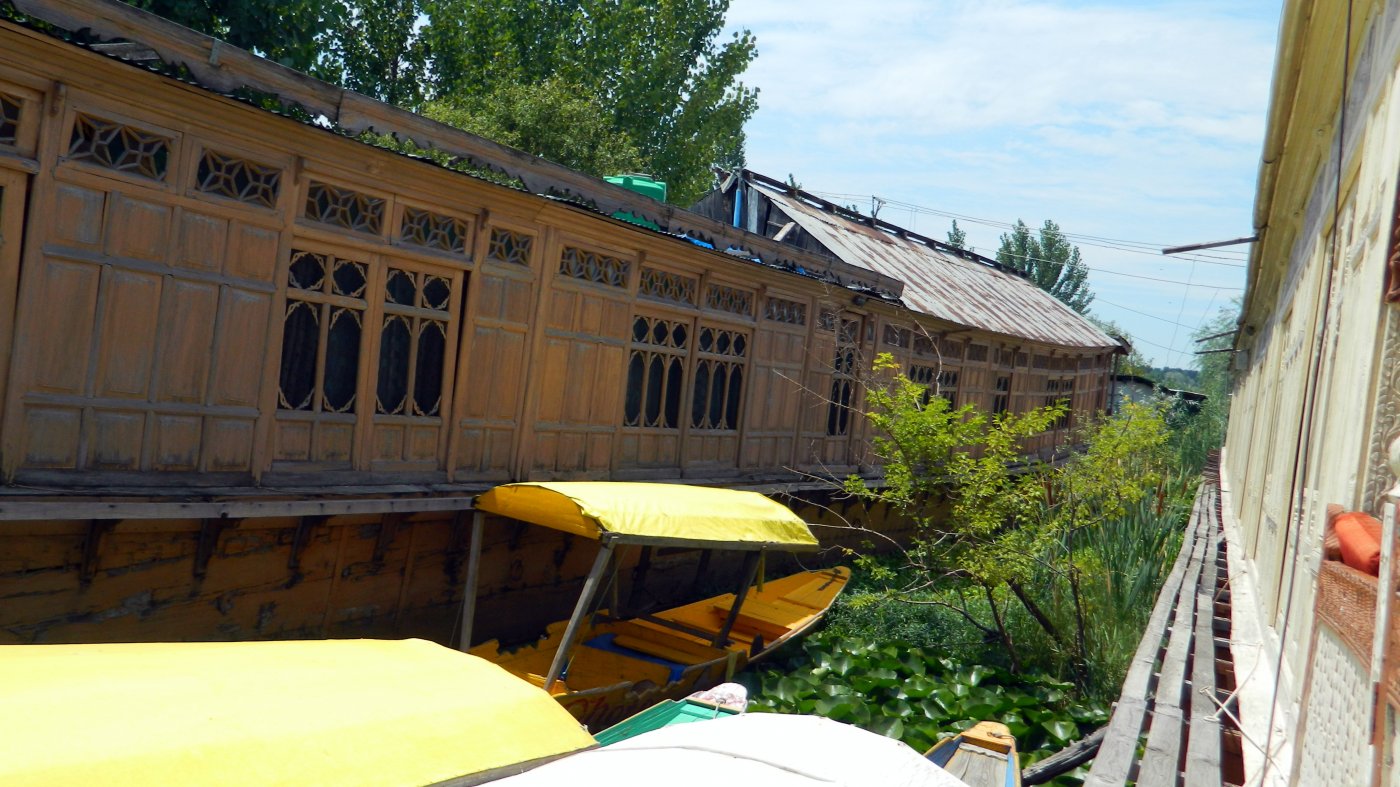 As the evening set in Shikara's were seen to be making moves around the lake. We opted for a shikara ride along the Dal lake which turned out to be a good decision.coz by the end of the Shikara ride I was in love with Kashmir.(shall post dal lake pics in a day once received)

Back from the Shikara ride at dark. Some passing of time watching the happening of the day in srinagar on national news and it was 12pm already. The Tavera had arrived this time with a seasoned driver. The morning fellow had put his father to the task.

Beautifully narrated. May god bless Kashmir and its people . Hope to see everything in better shape in coming days .