Heavy rains lashed Hyderabad and other parts of Telangana on Wednesday, throwing normal life out of gear in many places.
In a tweet, Telangana Municipal Administration Minister K T Rama Rao said that Hyderabad is 'witnessing the highest ever rainfall in September in over 100 plus years'.

Jakranpalle and Balkonda in Nizamabad district received 95 mm and 89 mm of rainfall respectively in nearly 12 hours since Wednesday morning, according to official data. 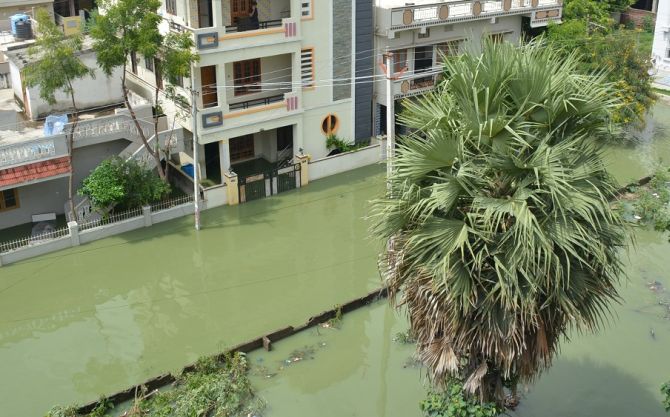 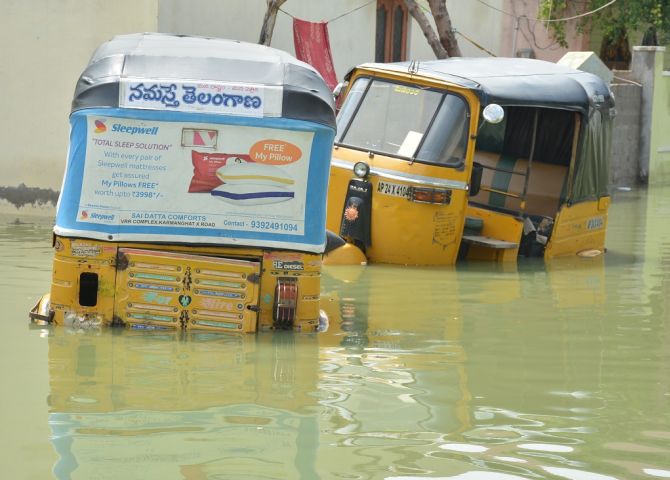 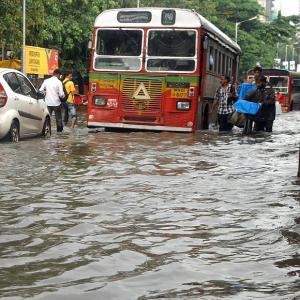 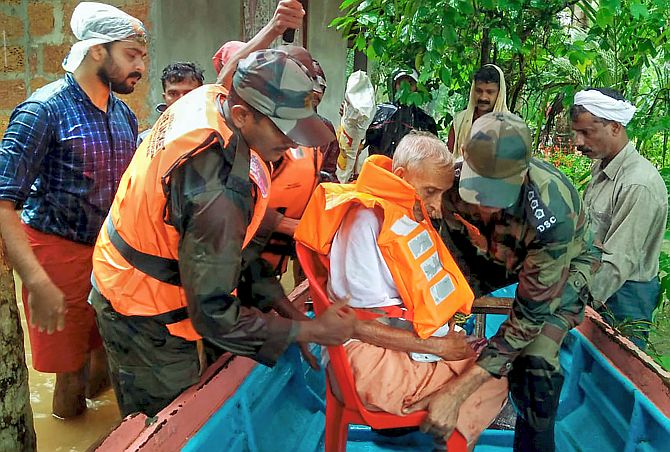 'Yediurappa is battling the floods alone'
The Meteorological Centre in Hyderabad said the Southwest monsoon has been vigorous over Telangana and rain occurred at most places in the state. 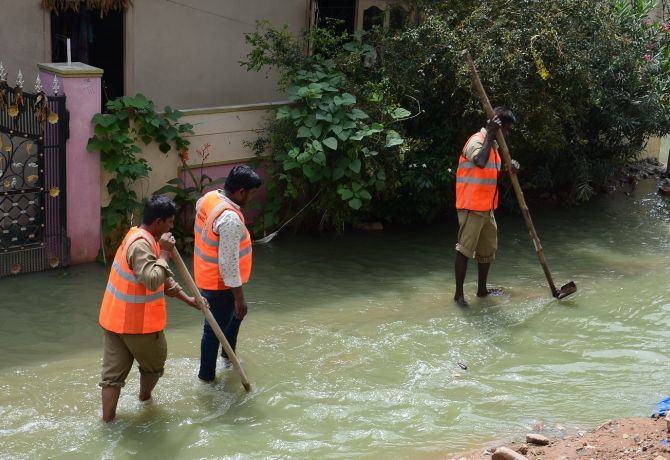 The heavy rains led to water stagnation at several places in Hyderabad, hitting free movement of traffic and the personnel of GHMC swung into action to clear the roads.
Traffic snarls were witnessed in the IT hub at Gachibowli and other localities in Hyderabad. 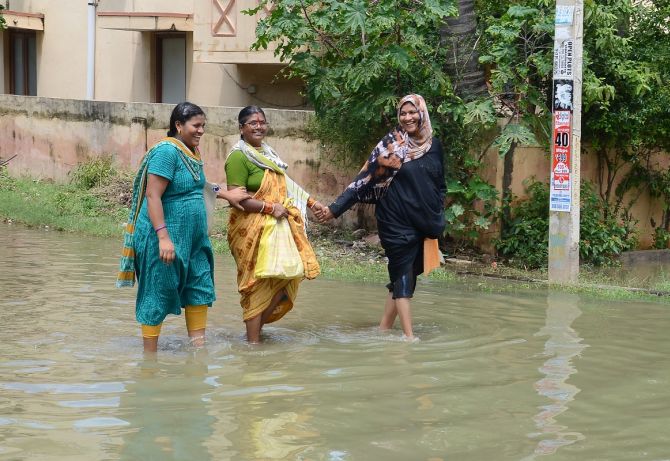 The water level in Hussain Sagar lake in the city touched 513.70 metres, GHMC sources said adding it can hold water up to 514.9 metres.
Union Minister of State for Home G Kishan Reddy, Lok Sabha member from Secunderabad, spoke to the state Chief Secretary and the GHMC Commissioner and enquired about the rain situation, a Bharatiya Janata Party release said. 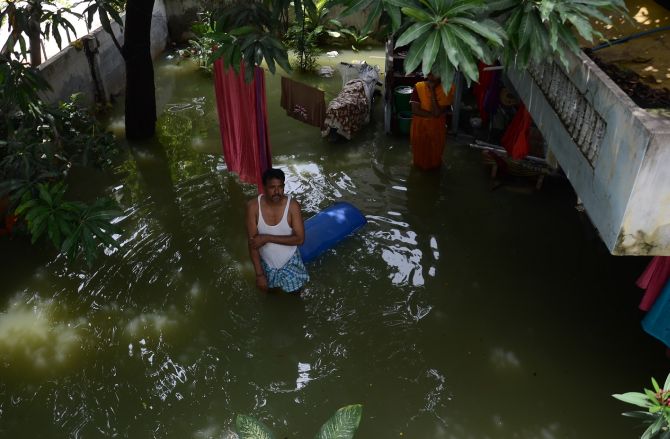 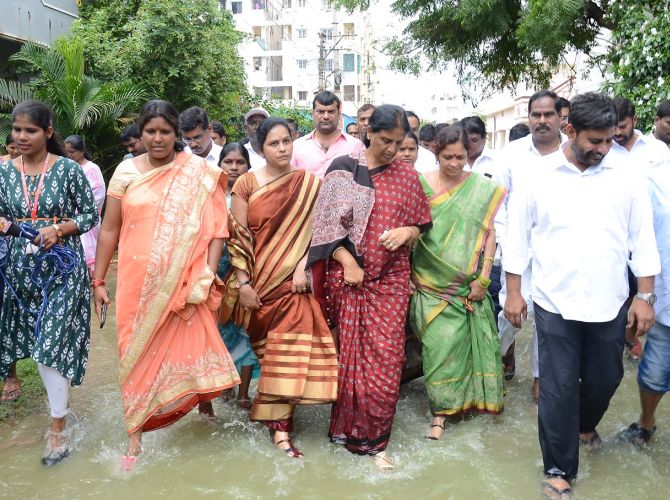 State Municipal Administration Minister K T Rama Rao tweeted, We are witnessing the highest ever rainfall in September in over 100 plus years! I would like to thank the hardworking teams of @GHMCOnline, @HydTP, @TSSPDCLCorp. 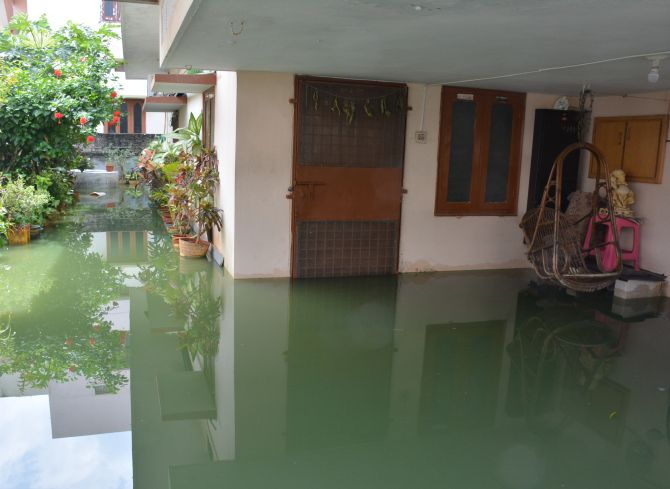 Last updated on: September 26, 2019 23:00 IST
At least 17 persons were killed in rain-related incidents after intense showers battered Pune city and parts of the district on Wednesday and Thursday, officials said. IMAGE: Vehicles are piled up on a street after a flash flood following heavy rains, in Pune. Photograph: PTI Photo
The district administration declared holiday on Friday for schools in the city as well in the tehsils of Haveli, Bhor, Purandar and Baramati.

Around 2,500 people were shifted to safer places in Baramati tehsil after water was released from the Nazare dam on the Karha river near Jejuri, district officials said. IMAGE: A man walks past vehicles piled up on a street after floodwater from Ambilodha Nala (Sewage water stream) entered the Sahakar Nagar locality in Pune. Photograph: PTI Photo
Around 3,000 people were taken to safer places due to the flooding in low-lying areas in Pune city and the district, the police said.
In the morning, various authorities had put the figure of those who were shifted to safer places at about 15,000.
Schools and colleges in many places had declared a holiday on Thursday in view of the downpour which began the day before. 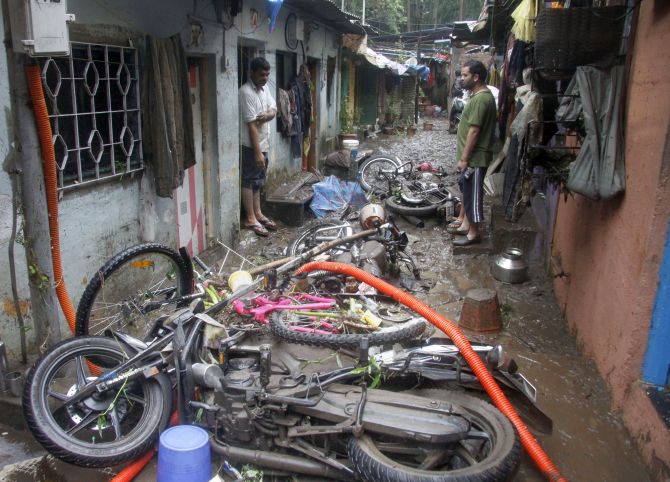 IMAGE: Residents stand next to damaged vehicles in a lane after floodwater entered a locality. Photograph: PTI Photo IMAGE: NDRF recovered the body of a man from a car found floating in flood water on Singhnad Road in Pune. Photograph: ANI

Another four people went missing in Sinhgad Road and Bharti Vidyapeeth area, he said.
Elsewhere in the Pune district, five people were killed in Purandar and Haveli tehsils.
"In Khed Shivapur on Mumbai- Bengaluru highway, four people were killed and two are still missing. In Purandar, one person was swept away in floods and another is missing," said an officer attached to the Pune district police. 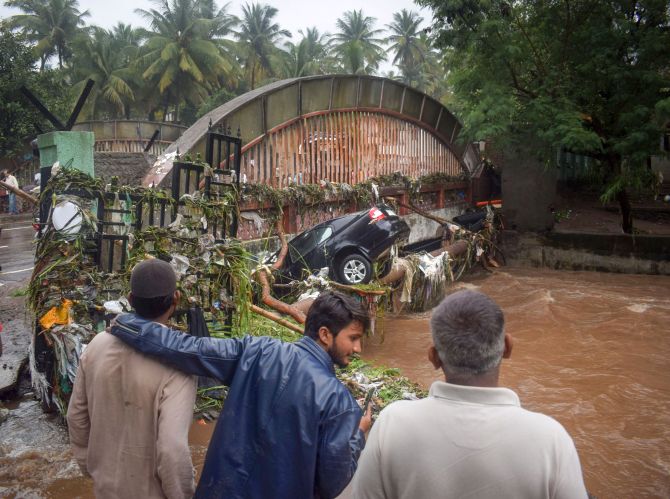 IMAGE: Residents look at the vehicles that got washed away in floodwater. Photograph: PTI Photo

The Army rescued 300 people, including some stranded on rooftops and in the trees, from Solapur Road area, a defence spokesperson said.
A civic official said that as many as 175 vehicles were washed away in floods.
Maharashtra Chief Minister Devendra Fadnavis expressed grief over the deaths. 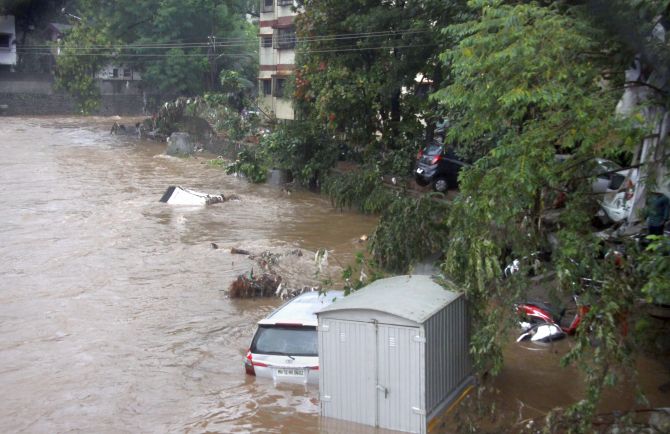 IMAGE: A view of vehicles washed away in floodwater. Photograph: PTI Photo

'My deepest condolences to the families. We are providing all possible assistance needed. State disaster management officials and control room in continuous touch with Pune collector and Pune Municipal Corporation,' he tweeted.
'2 NDRF teams are deployed in Pune & 2 in Baramati. One more NDRF team is on way to Baramati. State Government is also closely monitoring the dam discharge,' Fadnavis added.
District Collector Naval Kishor Ram said that at least 59 villages in the district were affected by the floods. 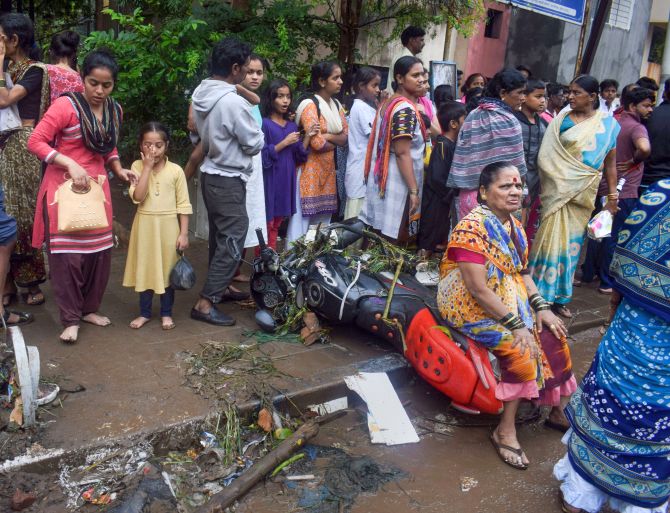 "We have communicated the whole situation to the Election Commission (as the model code of conduct is in force for October 21 Assembly polls) and appropriate aid will be provided to the victims soon," he said.
Pune commissioner Saurabh Rao said the city recorded 106 mm of rain on Thursday.
When asked if unauthorized constructions exacerbated the situation, he said action will be taken against such structures.

At least 1.9 billion living in ten major river basins in the Hindu Kush region will face the strongest impact of climate change across Asia. This and more takeaways from the IPCC special climate report, here: 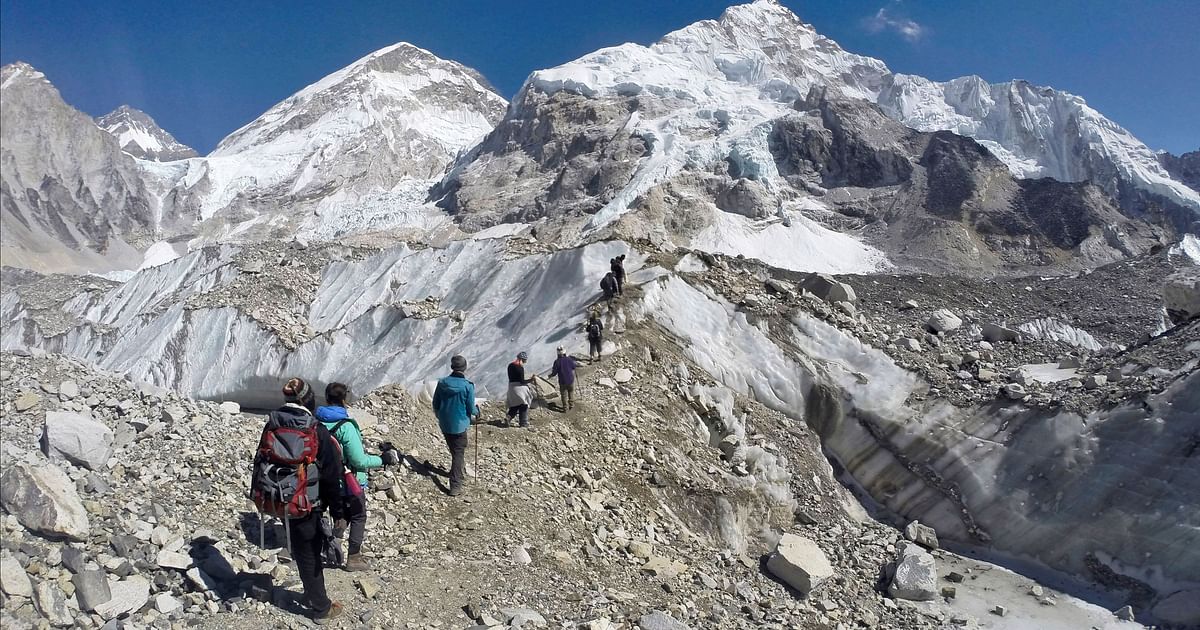 Mountains likely to lose 80 percent of their glaciers in just 80 years. Snowfall In Kedarnath And Badrinath After Rainfall First Time In Season 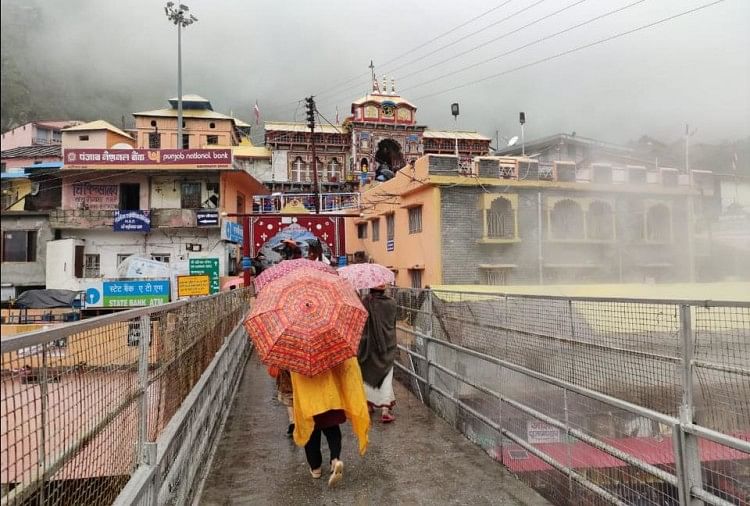 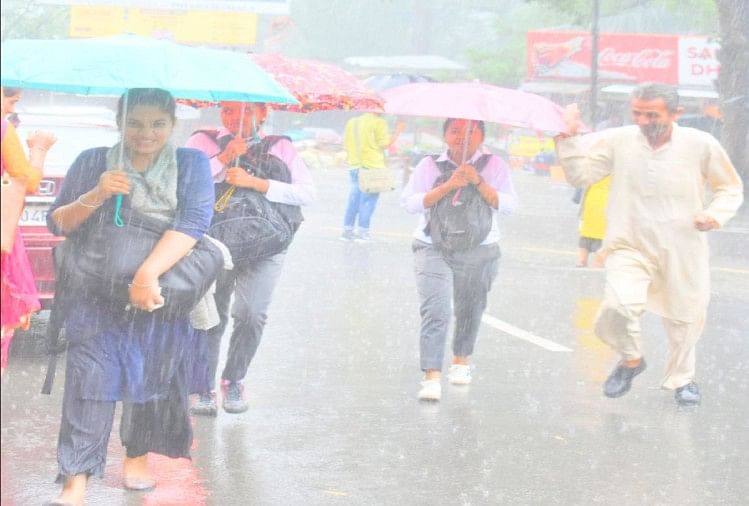 PLEASE BEWARE THIS SEASON OCTOBER ONWARDS.
HIMALAYAS DO NOT FORGIVE THOSE WHO THINK THEY ARE HEROS, OR TAKE UNDUE RISK.

For those planning road trips to Ladakh,
i would suggest delay your plans to next season.
Just like last winters, there was far more snowfall than expected,
this winter, winter seems to be coming early.
On Monday already Rohtang Pass and Baralacha La got snowfall.
Looking at the weather forecast for next one week,
there is snowfall in many regions.
If you get stuck, and most areas do not have Mobile Coverage, you will not be able to ask for help, and no one will know where you are stuck.