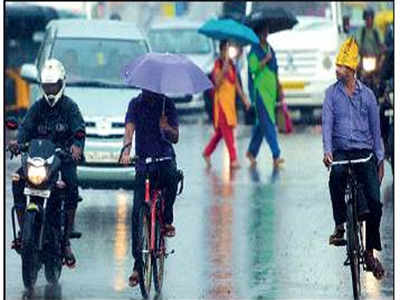 After registering 101.6mm of rain a day ago, the intensity of the spells of rain reduced with Nungambakkam recording 5.2mm and Meenambakkam 1.9mm.
IMD’s city forecast for the next 48 hours says, “The sky condition is likely to be generally cloudy. Light to moderate rain is likely to occur in some areas. Maximum and minimum temperatures are likely to be around 33°C and 25°C.” 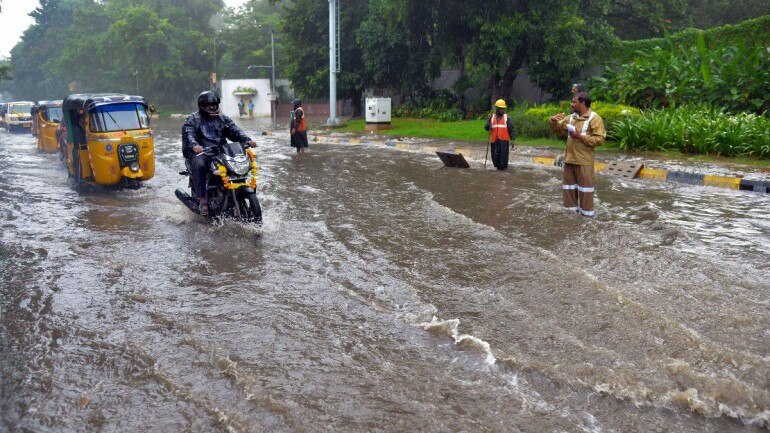 An orange alert has also been issued for October 22 for 13 districts. (File photo: PTI)

The India Meteorological Department (IMD) on Monday issued an orange alert and predicted heavy to very heavy rainfall for two days in various districts of Kerala.
According to the weather forecast agency, an orange alert has been issued in 12 districts, including Thiruvananthapuram, Kollam, Alappuzha, Pathanamthitta, Kottayam, Idukki, Ernakulam, Thrissur, Palakkad, Malappuram, Kozhikode, and Wayanad, which will receive heavy to very heavy rainfall today accompanied with thunderstorm and lightning.

61 people are talking about this

An orange alert by the IMD means "be prepared to face any situation arising out of severe weather condition".
Moreover, an orange alert has also been issued for October 22 for 13 districts, including Kollam, Alappuzha, Pathanamthitta, Kottayam, Idukki, Ernakulam, Thrissur, Palakkad, Malappuram, Kozhikode, Wayanad, Kannur and Kasargod. 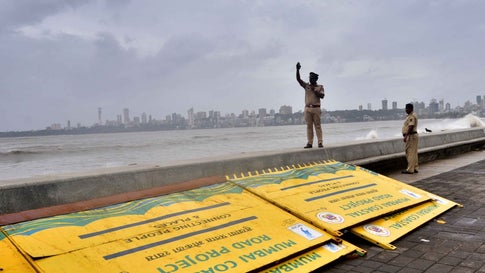 Police personnel urge people to maintain safe distance from the shoreline on the Arabian Sea coast in Mumbai
(Photo: SL Shanth Kumar/BCCL Mumbai)
The first cyclone of the post-monsoon season is all set to form over the Arabian Sea in another 24 hours. The system, currently a depression over the east-central Arabian sea, will be named Kyarr once it intensifies into a cyclonic storm.
The India Meteorological Department (IMD) reports that the system intensified into a depression on Thursday morning. Forecast suggests that the system is likely to intensify further into a deep depression in by Thursday night and subsequently into a cyclonic storm by Friday afternoon. IMD says that it will move east-northeastwards slowly and stay in the east-central Arabian Sea till Friday. After that, the intensifying storm is expected to drift west-northwestwards towards the Arabian Peninsula.
Coupled with a well-marked low-pressure area lying over coastal Andhra Pradesh, the depression is likely to bring widespread rainfall with isolated very heavy falls over the Konkan, Goa and coastal Karnataka regions on Thursday. The intensity of rainfall is likely to increase with the possibility of extremely heavy rains over these regions on Friday. The IMD has also warned of strong winds of up to 80 kmph along and off the Maharashtra coast, and fisherfolk are advised not to venture into the sea.

The depression is currently 360 km west southwest of Ratnagiri. The IMD has issued an 'red' warning for districts along the west coast in Maharashtra, Goa and Karnataka for Thursday. Another 'orange' level alert has been issued for Friday as the chances of very heavy rains prevail. The rainfall intensity is likely to drop after Saturday as the storm steers away towards the Arabian coast.
The name 'Kyarr' was given to the storm by Myanmar. The naming follows the guidelines set by the World Meteorological Organisation (WMO), which stipulates that the names for a cyclone in any ocean basin must be suggested by the countries in the region. For the north Indian Ocean, eight countries suggest the names, including India. While the Maldives named the previous cyclone 'Hikaa', India named the cyclone that formed over the Arabian Sea in June this year, as 'Vayu'.
This story has been updated at 5:00 pm Thursday as per the latest updates.


SUBSCRIBE
Check out the cloud build-up of monsoon rains in the last 12 hours, responsible for giving rains across India.

The India Met Department (IMD) has maintained the outlook for a depression to materialise over the East-Central Arabian Sea, with a well-marked low-pressure waiting for the required calibration.
The transformation is expected to happen during the course of the day (12 hours), following which it would intensify as a tropical cyclone by Saturday.
A survey of leading global models suggested that a cyclone is indeed in the making as the prospective depression takes a U-turn away from the West Coast, and undergoes a gradual intensification.

Powerful cyclone?
Some of them go on to suggest that the cyclone would acquire raw power over the warm waters of the Arabian Sea, coupled with the assured stay there, until it reaches the Oman/ Yemen coasts.
The following are the graphical representations put out by these models, with respect to the track and intensification of the system over the next four to five days, away from India.

The Canadian Met Centre saw the system developing into a cyclone midway in the Arabian Sea, but beginning to weaken as it prepares to drift into the Oman coast (above).

The Global Forecast System (GFS) of the US National Centres for Environmental Prediction, too, sees a similar traction, intensification and weakening sequence, but the cyclone is directed along a straight line across the Arabian Sea, taking it towards the Gulf of Eden-Yemen (above).

The US Navy Global Environmental Model shows an entirely different track, with the powerful cyclone changing course to the North midway from the Central Arabian Sea, and heading towards the Karachi coast in Pakistan, apparently under the influence of an intervening western disturbance from the opposite direction (above).

The Japanese Meteorological Agency tends to agree with the first two forecasts, which takes the cyclone towards the familiar track leading to the Oman coast, but with higher intensity than forecast by the first two (above).

Last but not the least, the UK Met Office model sees a powerful cyclone brewing in the Arabian Sea and racing towards the southern parts of the Oman coast (above).


Heavy rain forecast
Back home, in the Bay of Bengal, a well-marked low-pressure area persisted off the Andhra Pradesh coast in the West-Central basin on Thursday morning, the IMD said.
The Met has not indicated prospects of an intensification of the system; instead, it is forecast to trudge towards the North Andhra Pradesh coast.
Under the influence of the above system, in concert with the counterpart in the Arabian Sea, the IMD has forecast fairly widespread to widespread rainfall, with isolated heavy to very heavy falls over Konkan, Goa, coastal Karnataka on the West Coast, and Odisha and Coastal Andhra Pradesh during the next two days.
Extremely heavy rainfall is likely over Konkan, Goa and Coastal Karnataka tomorrow (Friday). 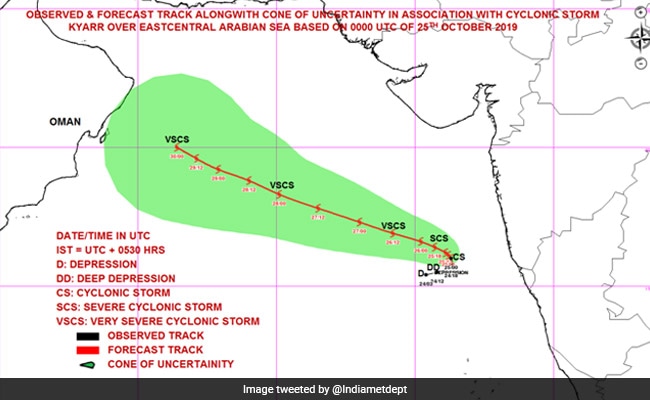 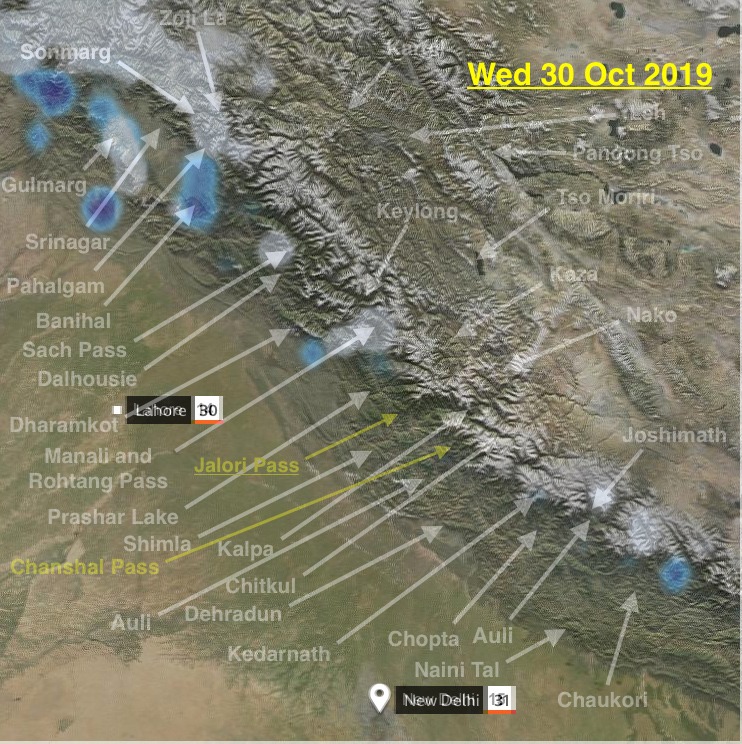 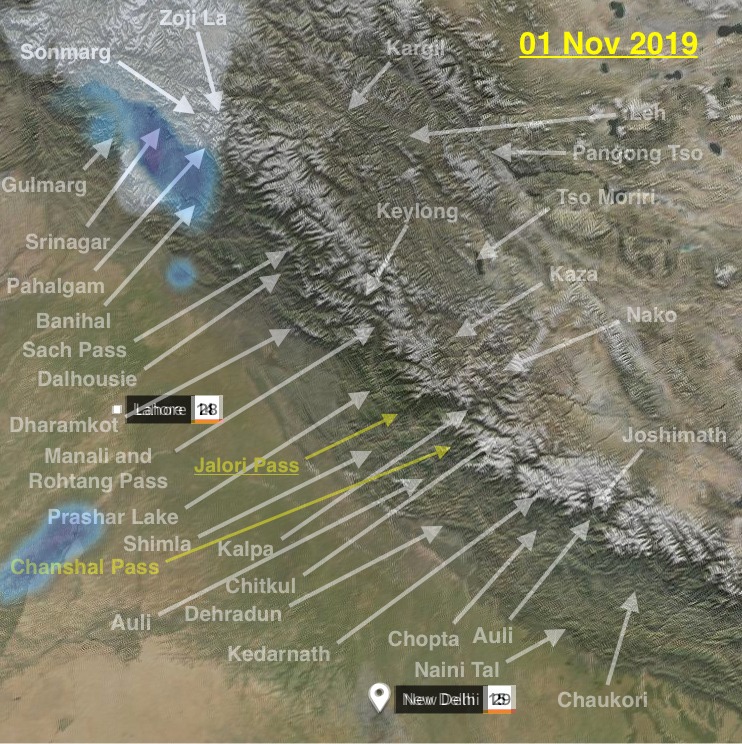 WDs are here.
this should be the first good snowfall WD of the season, hope i am right.


CAUTION
Many passes will shut now, so if you are on the other side of Rohtang, or Kunzum or Baralacha La or at Sarchu, or Zoji La,
time to get out immediately.
The WD arriving on Sat, seems to be intensifying
So those planning road trips,
do cater for much more colder weather and drop in temp. 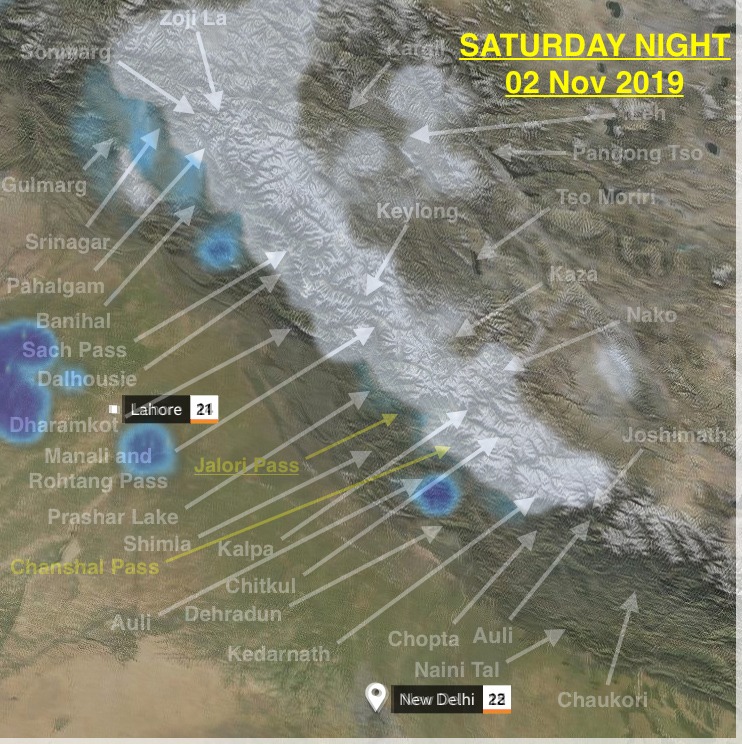 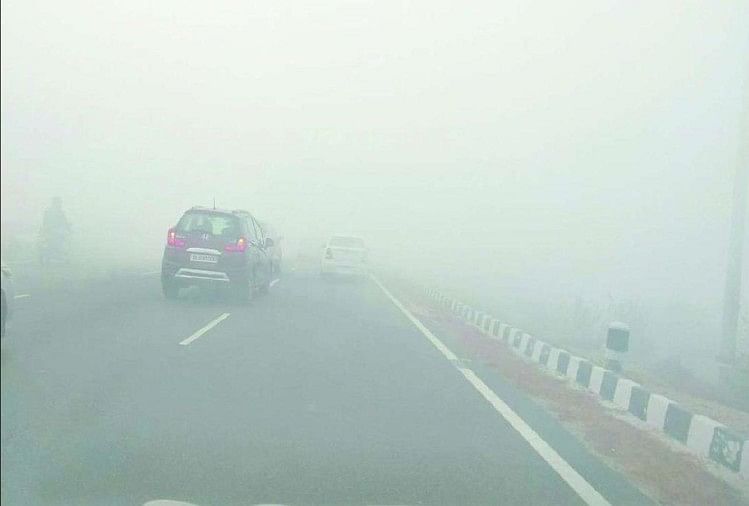