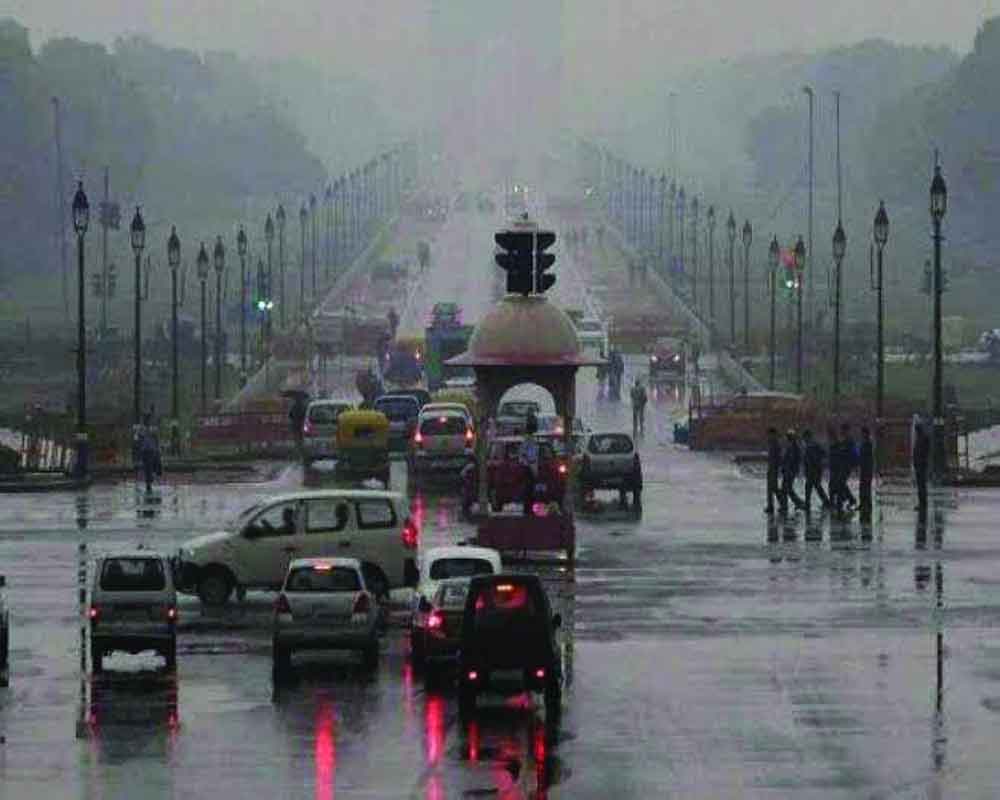 The Palam weather station registered an all-time December high of 40.2 mm in the last 24 hours. It had measured 33.7 mm rainfall on December 3, 1997, the officials said.
India Meteorological Department (IMD) in its weekly weather forecast said foggy days will start from Saturday. “Moderate to dense fog from December 14 to December 19,” MeT updated in Regional Weather Forecast for Delhi.
For the next week, minimum temperature will remain at 8 degrees Celsius and maximum will fluctuate between 18 and 20 degrees Celsius.
With abnormal rainfall, Delhi’s air quality improved to “moderate” category after many days. However, the air quality may relapse to “very poor” level from December 16, SAFAR said.
According to Rajender Jenamani, Met Scientist for Delhi airport, December 12 thunderstorm caused diversion of 47 flights. “Delhi airport has never seen such high number of diversion in December in last 25 years.

The heavy rainfall and high-velocity winds in the national capital led to a significant improvement in the city's air quality. Source: Tribune photo.

Northern plains received widespread rains while hills witnessed snowfall on Friday, throwing life out of gear in some places in the higher reaches and cutting off the Kashmir Valley from the rest of the country, with Delhi recording highest 24-hour December precipitation in 22 years.
The heavy rainfall and high-velocity winds in the national capital led to a significant improvement in the city's air quality.
The Safdarjung Observatory, figures of which are considered official for the city, recorded 33.5 mm rainfall, the second highest after 70 mm in December 1997, till 5:30 pm. The all-time high of 75.5 mm was recorded on December 3, 1923.
Meanwhile, the Palam weather station registered an all-time December high of 40.2 mm in the last 24 hours. It had gauged 33.7 mm rainfall on December 3, 1967, officials said.
Delhi recorded a low of 12.8 degrees Celsius and a high of 21.5 degrees Celsius, which was two notches below normal.

The season's first snowfall in Shimla, Nainital and Mussoorie cheered up locals and tourists.
Uttarakhand's popular hill stations got wrapped in a blanket of snow. The snowfall also continued in the upper reaches of the state, including Kedarnath, Badrinath, Auli, Yamunotri and Gangotri.
With places like Rudraprayag, Dehradun, Tehri, Pauri, Uttarkashi, Almora, Bagehswar and Pithorgarh being continuously lashed by rains for the last a few days, the whole state is in the grip of cold wave.
The cold wave and rains have forced authorities to keep schools in most parts of the hill state closed. The state transport authorities on Friday said various stretches of national and state highways have been blocked.
The famous Vaishno Devi shrine atop Trikuta hills experienced the season's first snowfall as moderate to heavy snow and rains lashed wide parts of Jammu and Kashmir and Ladakh for the second consecutive day on Friday disrupting normal life, officials said.

Snow ranging from five inches to over three feet has accumulated at various places, especially in Kashmir, which remained cut-off from the rest of the country following the closure of the Jammu-Srinagar national highway for a second day and cancellation of all flights to and from the Srinagar airport for the seventh day, they said.
The officials said the first snowfall of the season at the Vaisno Devi shrine in Reasi forced suspension of the helicopter service to the pilgrim site. However, the pilgrims continued their journey by foot to pay their obeisance at the shrine.
Besides Bhawan, Bahiron Ghati, Sanjichhat and Himkoti and the serpentine route in the shrine area received nearly one feet of snow till this afternoon, they said.
Leh in Ladakh was the coldest recorded place with a minimum of minus 10.4 degrees Celsius, followed by Drass in Kargil district at minus 6.6 degrees Celsius. The high altitude areas of Kargil, including Zojilla along the 434-km Srinagar-Leh national highway, recorded heavy snowfall, the officials said.
Most places in Uttar Pradesh also received light to moderate rainfall and thundershowers on Friday bringing down the mercury in the state. Chief Minister Yogi Adityanath directed officials to make arrangements for bonfires and other facilities at government shelter homes.

Shahjahanpur and Sambhal received a rainfall of 8 cm each, followed by Meja (7 cm), Hardoi, Rampur, Bilar and Moradabad (5 cm each), the MeT department said.
Meanwhile, a western disturbance triggered rain in several areas of Rajasthan where Ganganagar recorded the maximum precipitation at 15.8 mm. In the same period, that is since Thursday till Friday morning, Pilani, Sawaimadhopur and Jaipur recorded 12.2 mm, 10 mm and 9.8 mm rain, respectively, while Churu and Bikaner recorded a rainfall of 8.4 mm, the MeT department said.
Himachal Pradesh continued to record shivering temperatures on Friday after snowfall and rains across many places with state capital Shimla receiving season's first snowfall.
The tribal dominant districts of Lahaul-Spiti and Kinnaur along with tourist places of Kufri and Manali received snowfall for the second consecutive day, Shimla Meteorological Centre Director Manmohan Singh said.
Dalhousie and Kalpa also shivered at sub-zero temperatures following snowfall and rain, he said.

Tourist places Kufri in Shimla district and Manali in Kullu district received 30 cm and 12 cm snowfall, respectively, Singh said.
Kinnaur's Kalpa and Lahaul-Spiti's Keylong witnessed 23 cm and 12.5 cm snowfall respectively, he added. Besides, most places in the state including Dharamshala (66.4 mm), Kangra (50.5 mm) and Chamba (48 mm) received rains.
The minimum temperatures in Kufri, Manali, Dalhousie and Kalpa were minus 2.6, minus 1.6, minus 1.5, minus 1.2 degrees Celsius, respectively.
The minimum temperatures in Shimla, Dharamshala, Chamba, Mandi, Bilaspur, Hamirpur and Una were 1.9, 2.6, 4, 8, 10, 10.2 and 10.5 degrees Celsius respectively, Singh said.
Minimum temperatures in Punjab and Haryana hovered above normal limits for the second consecutive day on Friday, even as several parts of the two states received light to moderate rains.

Weather again is turnig for snowfall in Thursday and Friday.
Friday will see more Snowfall at some height and rain at lower regions in UK and Himachal Pradesh. 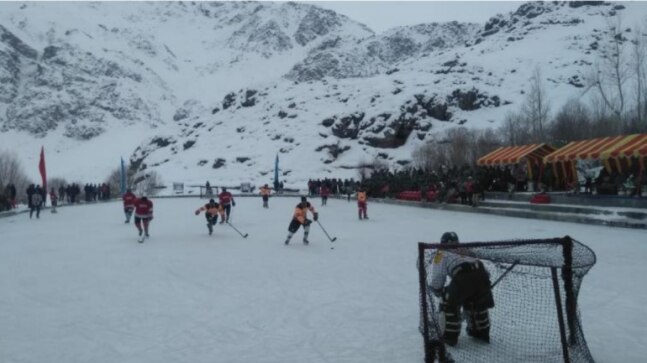 Most parts of north India got no respite from the icy winds and biting cold on Tuesday as the mercury continued its downward spiral and the maximum temperature in Delhi was recorded at its second lowest in 22 years.
According to Met officials, strong and cold northwesterly winds from Western Himalayan region along with a thick layer of low clouds is preventing sunlight from reaching the surface leading to a drop in temperatures.
The national capital continued to shiver on Tuesday as the maximum temperature settled 10 notches below the season's average at 12.2 degrees Celsius.
In 1997, the maximum temperature was recorded at 11.3 degrees Celsius.
The conditions are likely to persist on Wednesday and the maximum and minimum temperatures are likely to hover around 14 and nine degrees Celsius.
Night temperatures in most parts of Jammu and Kashmir and Ladakh continued to drop after the recent snowfall even as traffic on the Jammu-Srinagar national highway was disrupted for several hours due to multiple landslides on Tuesday.
However, the early morning sun provided some sort of relief to the people form the frigid conditions in the valley.
Pahalgam hill resort in south Kashmir, which serves as the base camp for the pilgrims during the annual Amarnath yatra, was the coldest recorded place in the region with a low of minus 12.2 degrees Celsius, an official of the meteorological department said.
He said the famous ski resort of Gulmarg in north Kashmir was freezing at a low of minus 11.0 degrees Celsius, while the minimum temperature fell by over two notches in Srinagar to settle at minus 3.7 degrees Celsius.
ADVERTISEMENT

Chandigarh, the common capital of the two states, recorded a high of 14 degrees Celsius, seven notches below normal, the official said.
Night temperatures at most places in the two states including Chandigarh, however, settled close to normal limits in the range of 8-10 degrees Celsisus.
Cold wave conditions intensified in Rajasthan with the state's only hill station Mount Abu recording a minimum temperature of 1.2 degree Celsius on Monday night, the meteorological department said.
In the plains, Bhilwara was the coldest place as it recorded a minimum temperature of 4.4 degree Celsius. 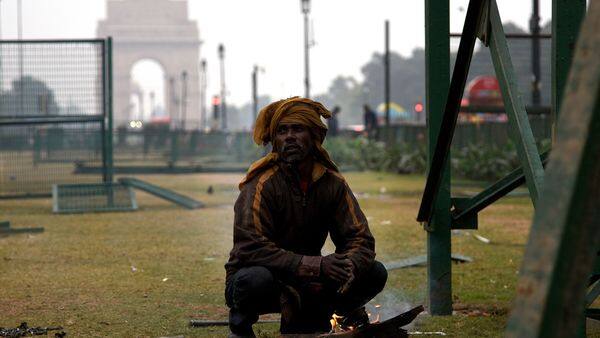 “There are strong, cold north-westerly winds blowing from the western Himalayan region, which has led to cold-day conditions across most parts of the north-west India. The low-level cloud cover is also blocking the sunlight from reaching earth," said Kuldeep Shrivastava, head, Regional Weather Forecasting Centre, New Delhi.
The cold conditions are likely to persist until Wednesday, after which the intensity may begin to decrease. A fresh western disturbance is also likely to impact the upper Himalayan region on Wednesday bringing scattered snowfall and rains to Jammu and Kashmir, Uttarakhand and Himachal Pradesh, but not much impact is expected over the plains.
However, as a matter of relief, the pollution levels in the National Capital Region (NCR) continue to remain under moderate levels. On Tuesday, the Air Quality Index (AQI) was recorded at 135 for Delhi, 128 for Gurugram and 190 for Noida. An AQI between 100-200 is considered to be moderate.

According to government’s air quality monitoring service- SAFAR, AQI is likely to remain in the moderate to poor category untill Wednesday night, due to high surface winds which are allowing dispersion of pollutants. But, the pollutants would begin to accumulate subsequently, as wind speed begin to decrease.
Vinobapuri in South-East Delhi, Adarsh Nagar and Dwarka are expected to see higher levels of AQI over the next few days, as minimum temperatures drop further and fog during early morning and late evening hours worsen the situation.


SUBSCRIBE
Chamoli (Uttarakhand), Dec 17 (ANI): The Badrinath shrine in the hilly state of Uttarakhand has been covered in a thick sheet of snow due to heavy snowfall in the town.