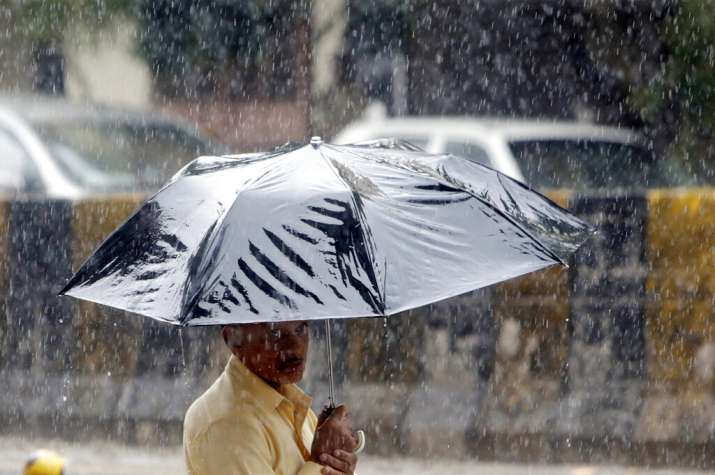 Several northeastern states have been bearing the brunt of the monsoon floods and local administrations have tried to move people from vulnerable areas to safer places.

The flood in Assam has affected nearly 9.3 lakh people in 23 districts. The mighty Brahmaputra is flowing above the danger mark in several areas, including Guwahati. Embankments, roads and bridges have been damaged at many places. Dibrugarh has been under water for four days.
Additionally, 1,289 villages are submerged and 37,313.46 hectares of crop area has been damaged, the disaster management authority said.
On Sunday, two landslides hit Guwahati, prompting authorities to ask people to move to safer places. A woman college student was buried by one of them near Raj Bhawan in Guwahati. No casualty was reported in the second landslide.
Two more people died in Dhemaji and Udalgriri districts due to flood. At least 18 people have died so far in Assam floods, according to an official estimate.
PSU major Oil India Ltd said its efforts to douse a blaze at its damaged gas well in Baghjan area have been severely hampered by the rising floodwater level at the site.
In Sikkim, 19 houses and a hostel of a senior secondary school were damaged in a flash flood in upper Djongu region, affecting at least 35 families, an official said.
Union Home Minister Amit Shah spoke to Assam Chief Minister Sarbananda Sonowal and state minister Himanta Biswa Sarma about the alarming situation developing due to the rising water of the Brahmaputra.

He also talked to Bihar Chief Minister Nitish Kumar and assured him Central help for potential flooding as the water level of Mahananda river continued to rise.
The central India too has received a decent amount of rainfall during this monsoon season and several rivers are flowing above the danger mark in various places.
Madhya Pradesh has received 88 per cent excess rainfall in June so far as compared to the normal average due to the early onset of monsoon. The monsoon arrived in Madhya Pradesh on June 14 and became active in the entire state in next 10 days, G D Mishra, senior meteorologist of India Meteorological Department's Bhopal office said.
UP, Bihar, Jharkhand also continued to received scattered rainfall.
A 10-year-old girl was killed and three persons were injured after being struck by lightning in Poonch district of Jammu and Kashmir, police said.
The lightning hit a mud-house around 5.30 pm, resulting in the on-the-spot death of the girl and injuries to three others.
The mercury, however, continued to rise in Delhi, Rajasthan, Punjab and Haryana.
In Delhi, the maximum temperature was recorded 40.2 degrees Celsius, three notches above the normal. At 42 degrees Celsius, Hisar was the hottest location across Punjab and Haryana.
Sri Ganganagar in Rajasthan was the hottest place in the state with a maximum temperature of 43 degrees Celsius. The meteorological department has said the monsoon appears to have weakened after reaching Rajasthan on June 25.
According to the MeT Department, till 8.30 am on Sunday, 2 cm of rainfall was recorded in Dholpur, Sepau in Dhaulpur and Kumher in Bharatpur.
It, however, said light rain can be expected over the next four-five days in Delhi and adjoining states. 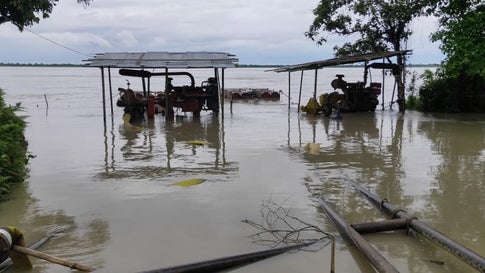 As the incessant monsoon rains continued, flood situation in Assam further worsened on Saturday with 2,071 villages in 21 districts being inundated, affecting 9.26 lakh people. The Brahmaputra is flowing above the danger level at many places in nine districts, as per the Central Water Commission.

The daily brief from ASDMA confirms that apart from 9.26 lakh people, the floods have also affected over 68,807 hectares of crops. Around 27,308 people have been evacuated so far and sheltered in 193 relief camps.

Rains continue across northeast
As per the forecasts, the rainfall is likely to continue for the next three days, albeit with lower intensity. An extended low-pressure area, called the monsoon trough, is the primary driver of monsoon rainfall across the northern half of India. As per the Indian Meteorological Department (IMD), the northward shift of this monsoon trough and the resulting incursion of moisture from the Bay of Bengal will cause widespread rainfall with isolated very heavy falls over northeast India during the next 2-3 days.

Meghalaya is also witnessing torrential rainfall from past seven days. On Saturday, the rainiest place on Earth, Cherrapunji‎, recorded a whopping 570 mm rainfall in 24 hours, as per the IMD records. Een parts of Assam like Cachar and Kheronighat recorded heavy rainfall of around 70 mm.

Both Assam and Meghalaya are under Red warning for Sunday, meaning the authorities must 'take action' to minimise the impact of adverse weather conditions. The warning level is downgraded to orange for Monday and Tuesday, which urges residents to 'be prepared'. 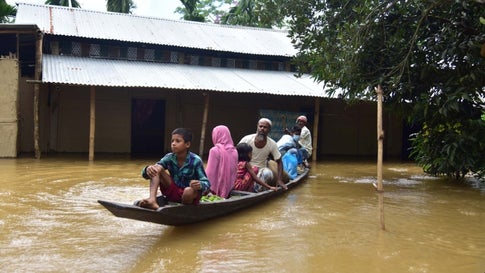 Villagers sail through the floodwater to reach a safer place at Bakulguri village near Kampur in Assam's flood-affected Nagaon district, during the first wave of floods in May 2020.
(IANS)

The National Disaster Response Force, Assam State Disaster Response Force personnel, along with local administrations, are continuously working to rescue the affected people and rendering the relief services, including distribution of relief to the marooned villagers. An essential bridge en route to Baghjan, around 550 km east of Guwahati, was damaged due to the floods and the Assam Chief Minister Sarbananda Sonowal has asked the official to build a bailey bridge for unimpeded movement of emergency services.

The Chief Minister has also directed the Deputy Commissioners of all the affected districts to address the needs of the flood-hit people urgently while also adhering to COVID-19 safety protocols. Meanwhile, the heavy monsoon rains affected the normal life in most of the other northeastern states. The rainwater has inundated vast low lying areas of Tripura, Arunachal Pradesh, Meghalaya and Mizoram.

OIL operations hit at Baghjan
Meanwhile, officials of the state-owned Oil India Ltd (OIL) said that due to the heavy downpour over the past few days, Baghjan— where its leaking oil well caught fire recently— and adjoining areas in Tinsukia district had been badly hit by floodwater and the accident site has been inundated, affecting the efforts to douse the blaze.

"All connecting roads to the OIL's oil well site have been submerged with floodwater. Bridges were damaged. At many places, water is flowing over the road with knee to waist-deep water. OIL's operational areas are heavily inundated," an OIL release said. A massive fire broke out on June 9 at OIL's Baghjan oil well near the Dibru-Saikhowa National Park that had been spewing natural gas and oil condensates uncontrollably since May 27.

As the COVID-19 confirmed cases approach 7,000-mark in Assam, the large-scale evacuation and sheltering could be extremely challenging for the authorities from a health and safety point of view. Last year during the monsoon floods, a joint outbreak of Japanese Encephalitis (JE) or Acute Encephalitis Syndrome (AES) had claimed more than 200 lives in Assam.

(With inputs from IANS)

This story was updated on Sunday at 7 pm, with the latest numbers.

Earthquake tremors felt in Delhi-NCR
Delhi and adjoining cities in the Delhi NCR felt earthquake tremors today. The tremors lasted for nearly 3-4 seconds. The exact location of the epcicentre is not known yet.
ADVERTISEMENT 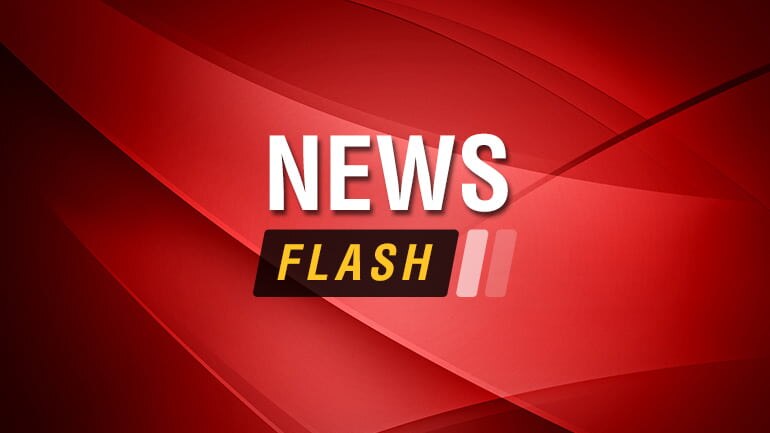 Delhi and adjoining cities in the Delhi NCR felt strong earthquake tremors today. The tremors lasted for nearly 3-4 seconds. The exact location of the epcicentre and the intensity of the earthquake in Delhi are not known yet.
This is not the first time that the Delhi-NCR has experienced earthquake tremors in recent months.
(This is a developing story. More details awaited.)

adsatinder said:
Earthquake tremors felt in Delhi-NCR
Delhi and adjoining cities in the Delhi NCR felt earthquake tremors today. The tremors lasted for nearly 3-4 seconds. The exact location of the epcicentre is not known yet.
Click to expand...

I think China is making some tunnel and nobody in India knows where it is.

citymonk said:
I think China is making some tunnel and nobody in India knows where it is.
Click to expand...

Indian Rats will find it and make their residence in it.
Like they do to Railway Property, they will destroy all wires etc in these tunnels too.

Delhi may see some rain on Sunday,
Nothing on Monday
Some rain on Tuesday & Thursday
Good Rain Possible on Wednesday
Friday also good rain possible. 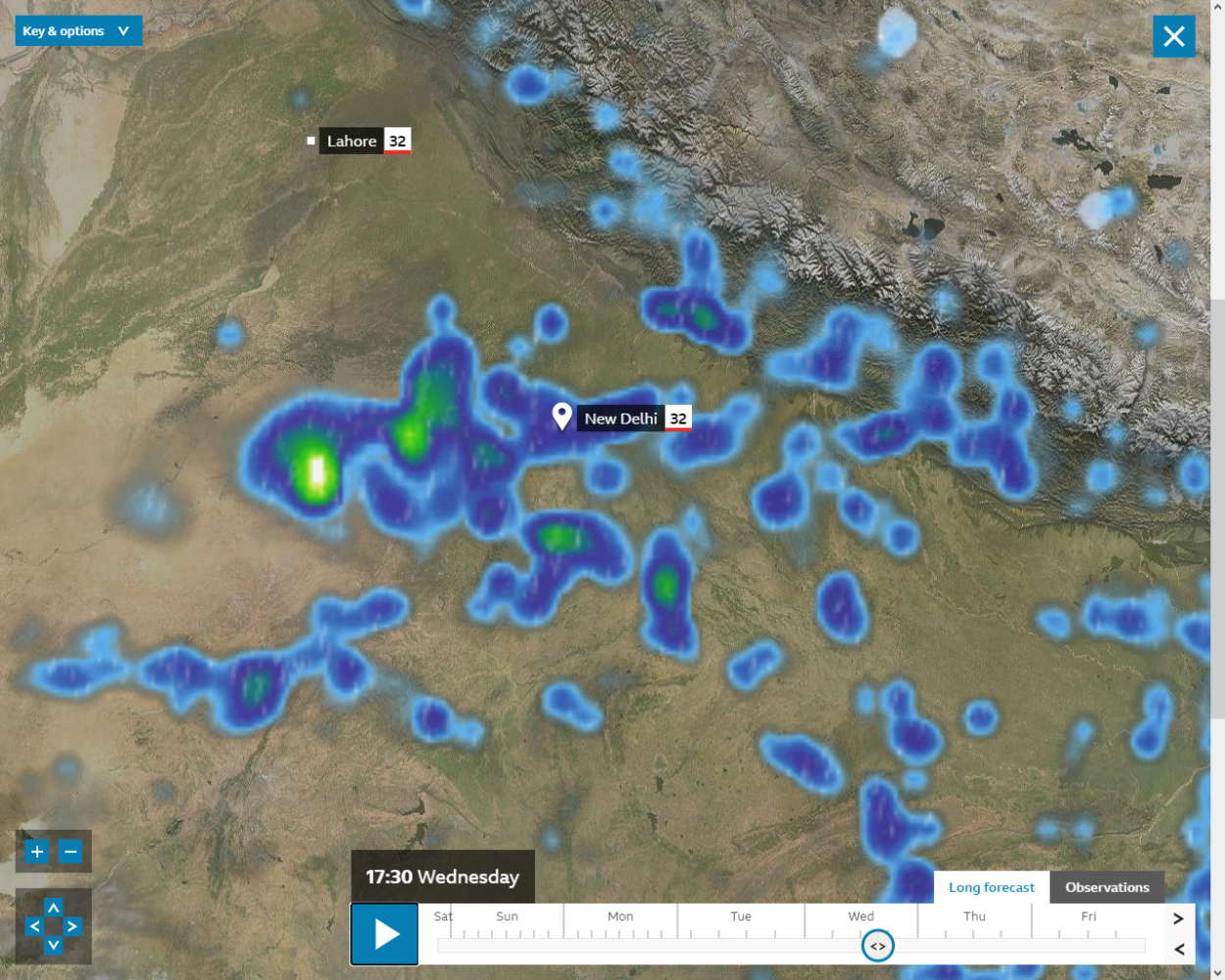 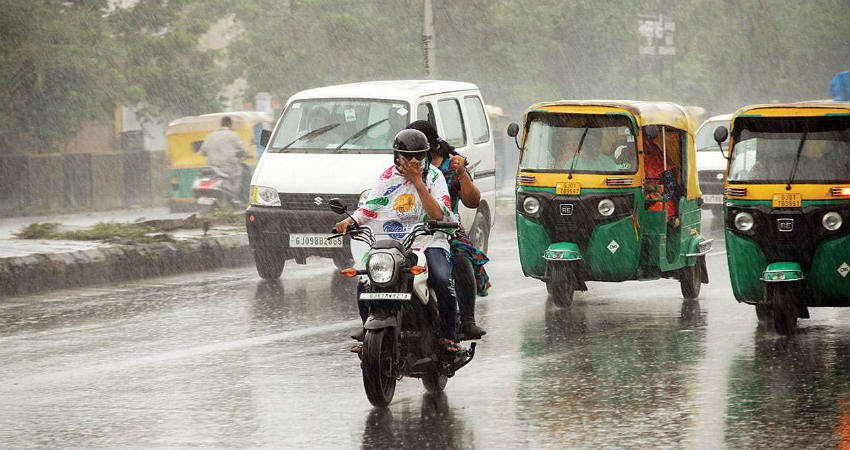 A monsoon depression may come up over Saurashtra & Kutch and adjoining the Arabian Sea between 06th and 08th July. An extremely wet and a pronged spell is threatening deluge over parts of South Gujarat and Saurashtra & Kutch commencing 04th July and lasting till 09th. A slow-moving monsoon system is going to meander in the proximity of the state and has the potential to cause flooding in some parts.
A cyclonic circulation is marked over South Gujarat & North Konkan and adjoining the Arabian Sea, more prominent in the medium levels of the atmosphere. This feature is going to become more organized and shift northward closer to the Saurashtra coast. Numerical models are displaying the potential of this system to strengthen to a possible depression between 06th and 08th July. High-velocity winds accompanied with torrential rains are going to lash South Gujarat on 04th and 5th July and later shift to Saurashtra & Kutch.

The coastal stations of South Gujarat look vulnerable and Vapi, Navsari, Valsad, Surat, and Bharuch are likely to face monsoon fury, to start with. Thereafter coastal Saurashtra will be impacted with heavy rains with the possibility of localized flooding. Along the coast, Bhavnagar, Mahuva, Diu, Somnath, Viraval, Porbander, Dwarka, Okha, and Jamnagar are susceptible to the deluge. Heavy rains may travel even inland over Amreli, Junagadh, and Rajkot and central Gujarat covering Anand, Ahmedabad, Vadodara, and Gandhinagar. In the final leg, Kutch is going to be battered with very heavy rains, more intense in the western half including Naliya, Mandvi, Bhuj, and Lakhpat.
Monsoon rains so far are in excess over Saurashtra & Kutch and this spell may drive this region to large excess. On the other hand, parts of Gujarat, particularly the northern ones have not enjoyed decent monsoon rains. The current spell will marginally improve the status and the complete state of Gujarat may turn rain surplus.