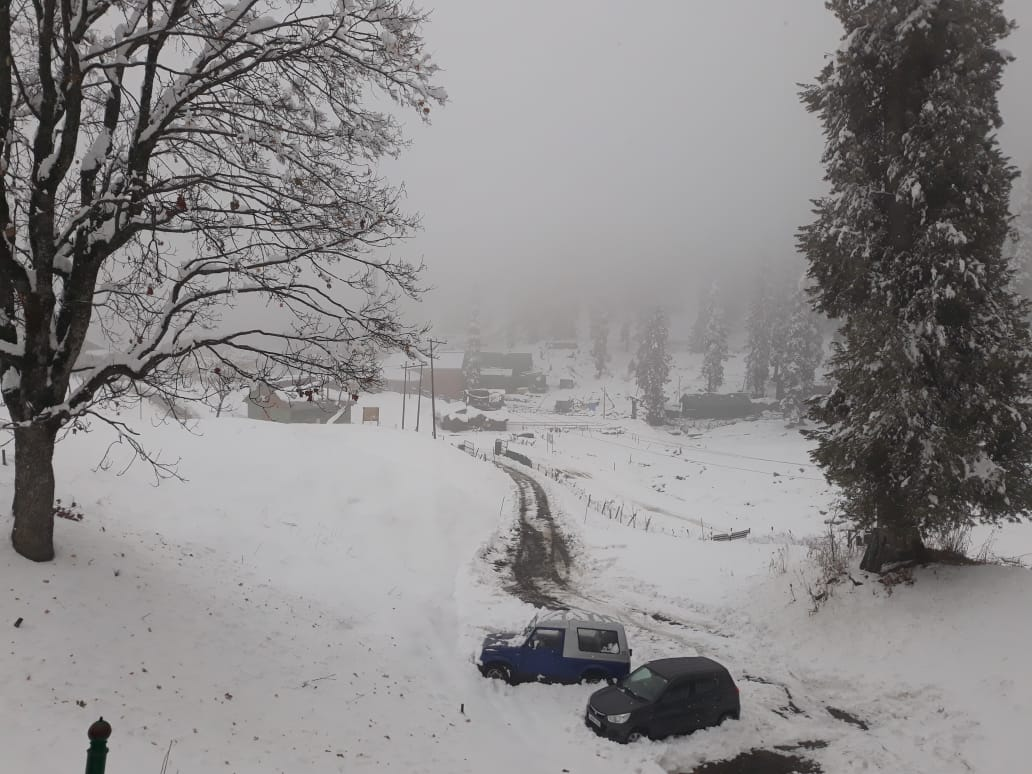 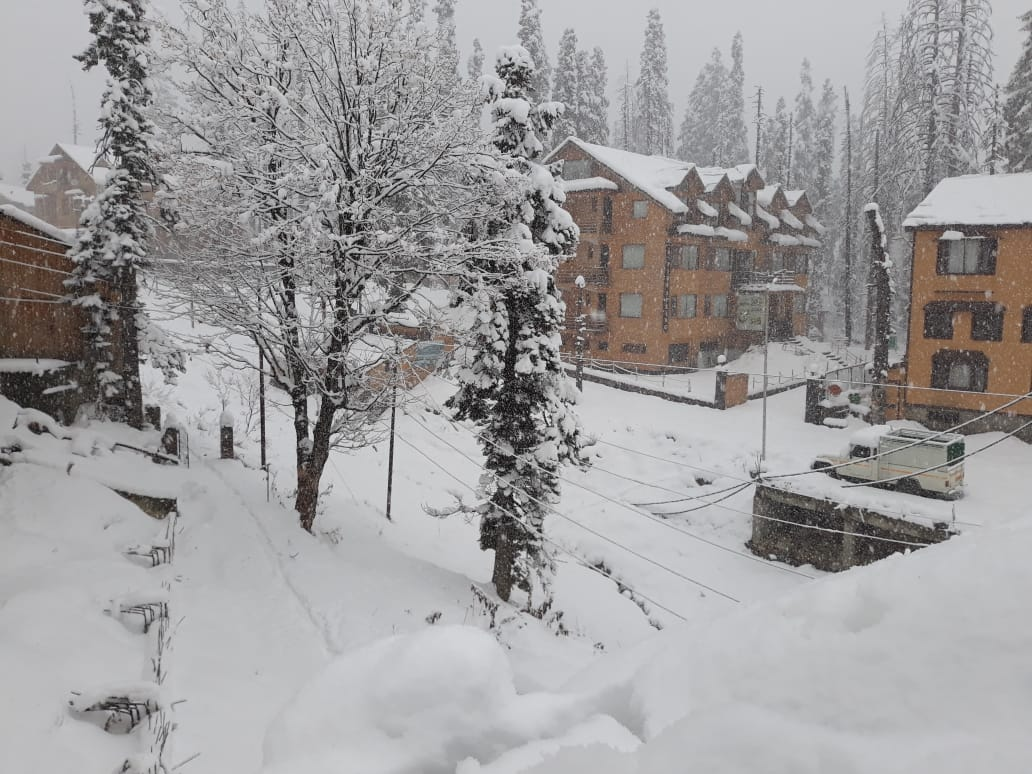 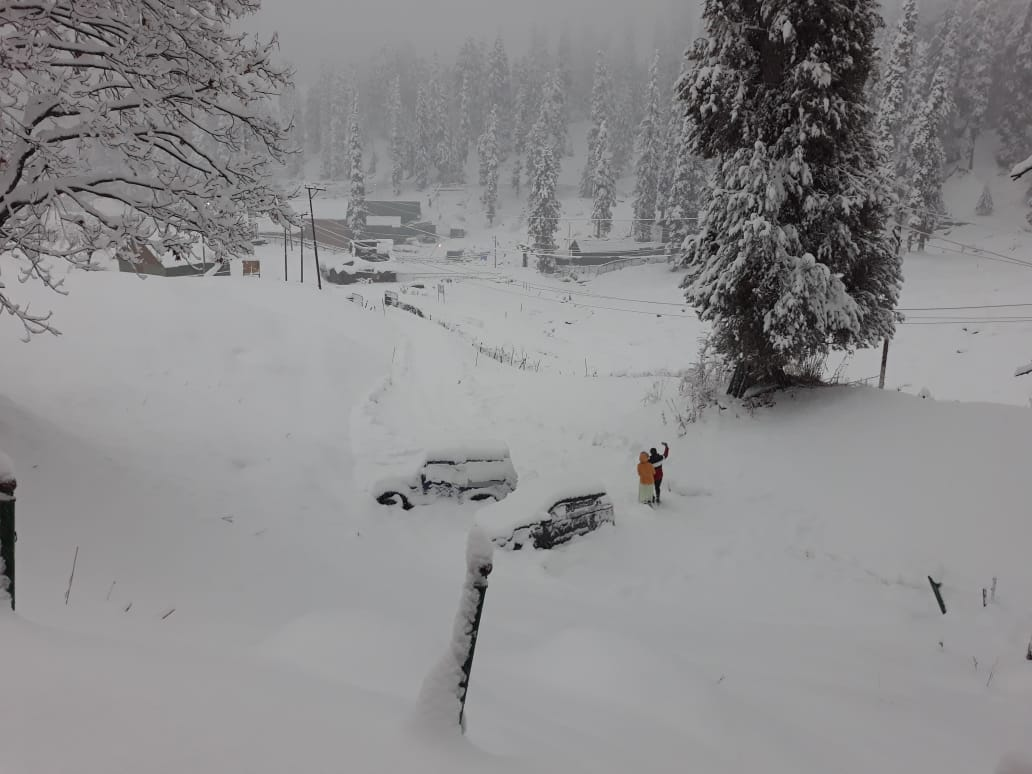 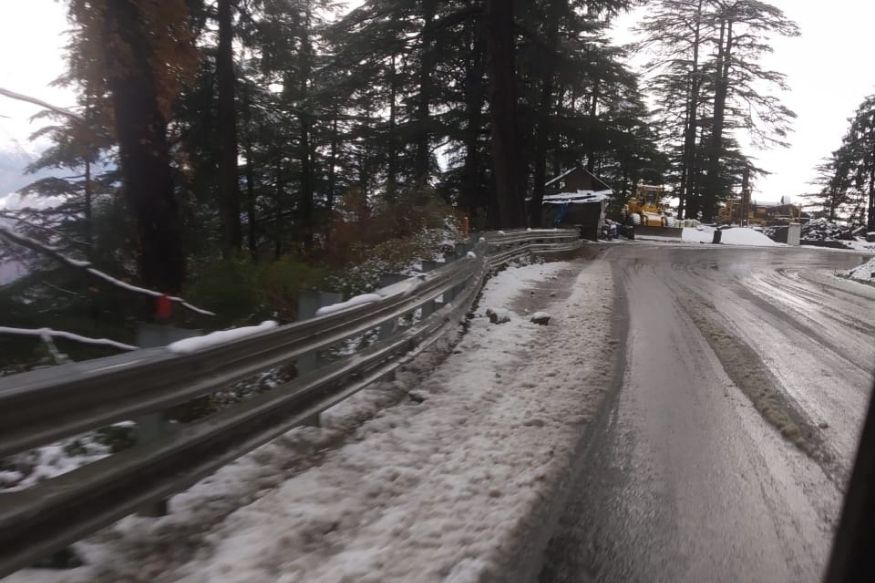 Kufri, a popular hill destination near Shimla, witnessed its first snowfall this morning. Social media platforms Twitter and Instagram have been flooded with beautiful photos of snow-covered roads and housetops. Photo: News18 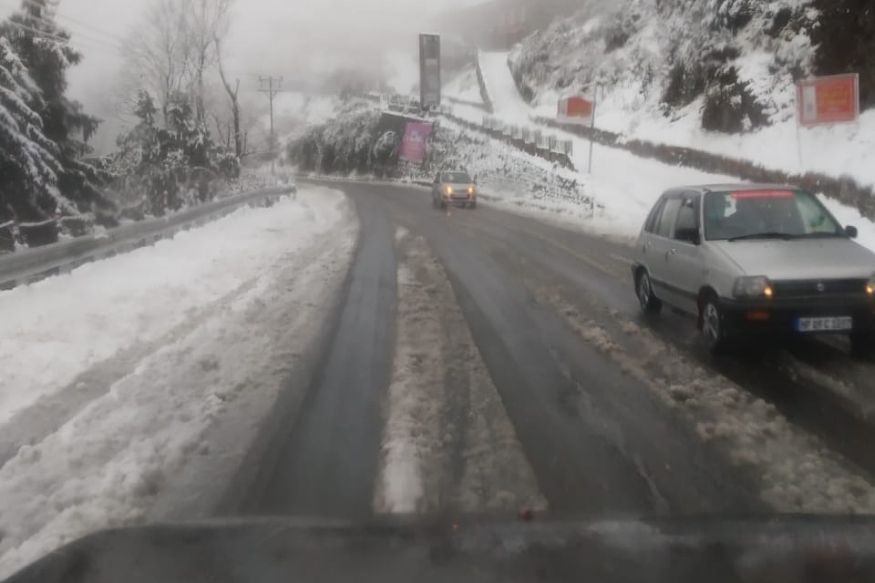 The first snowfall of the season came after a long dry spell and was welcomed by tourists and locals who had been waiting for it. According to reports, Shimla has already received 2cm of snow. Photo: News18 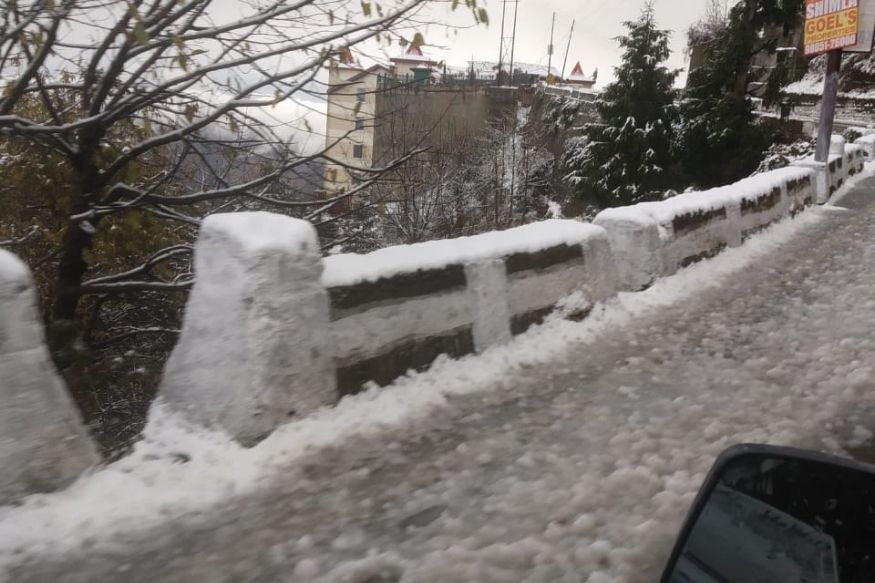 Three roads -- Narkanda, Kharapatthar near Jubbal and Khirki (Chopal) have been blocked due to snowfall. However, traffic on the Shimla Kufri road remained smooth. The local police are expecting an influx of tourists rushing to Kufri to witness the snowfall. Photo: News18 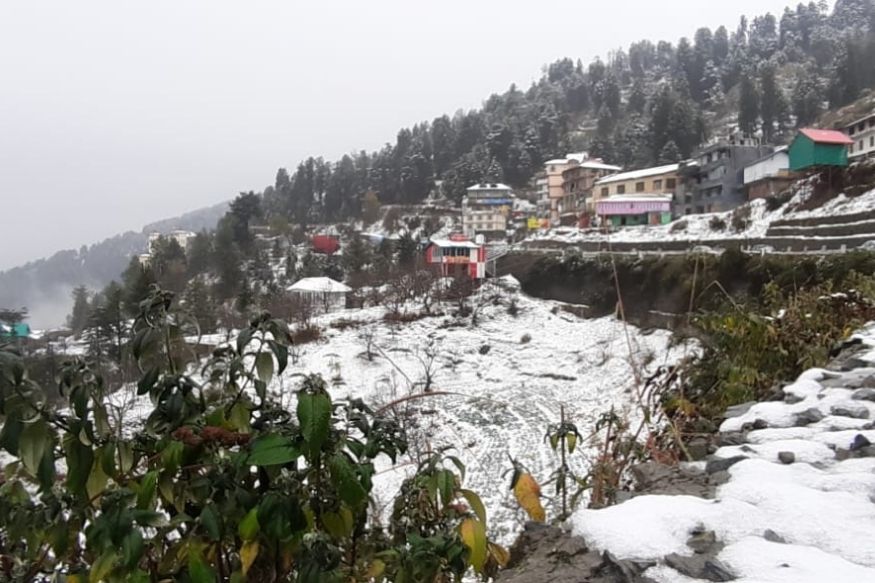 Early first snowfall of the season rolls out a perfect picture in the hills of Shimla. (Image: News18) 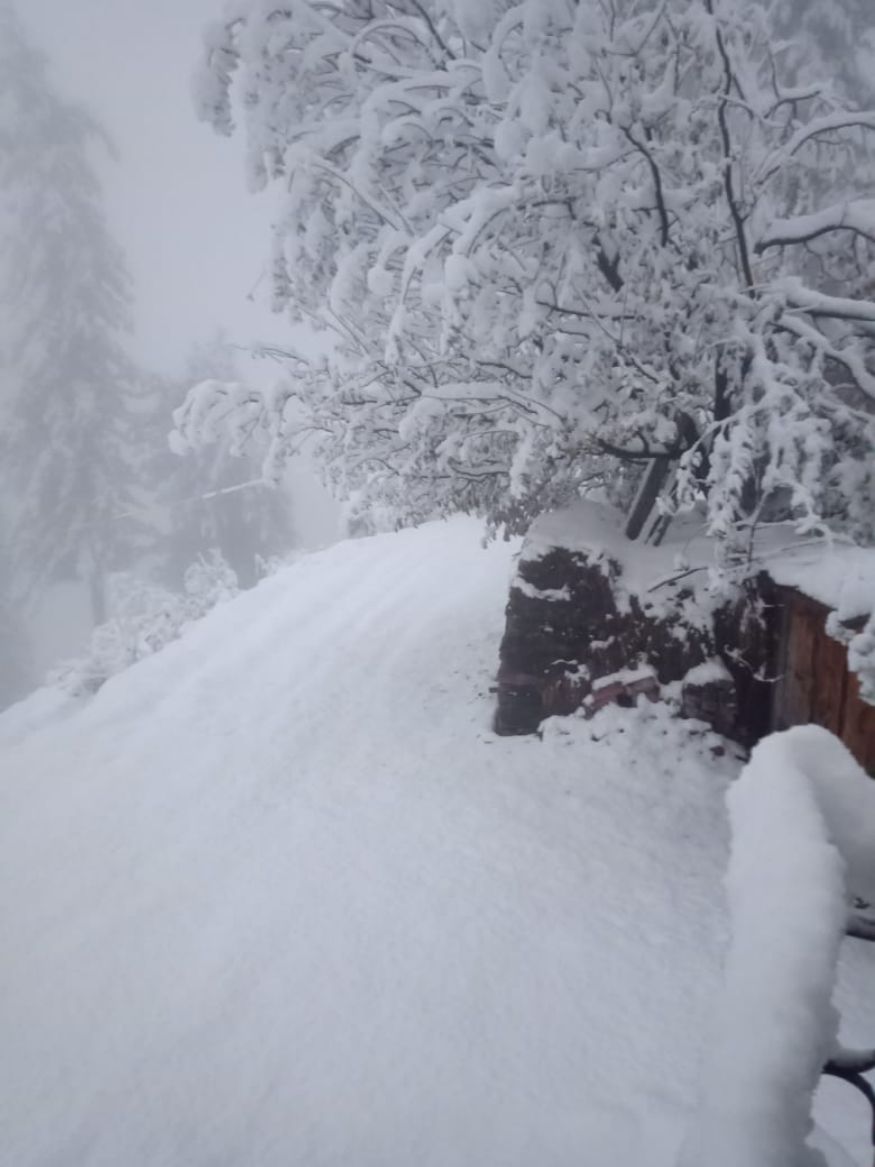 Temperature dips across state as snow, rain end dry spell; Keylong in Lahaul-Spiti district was coldest at minus 3°C 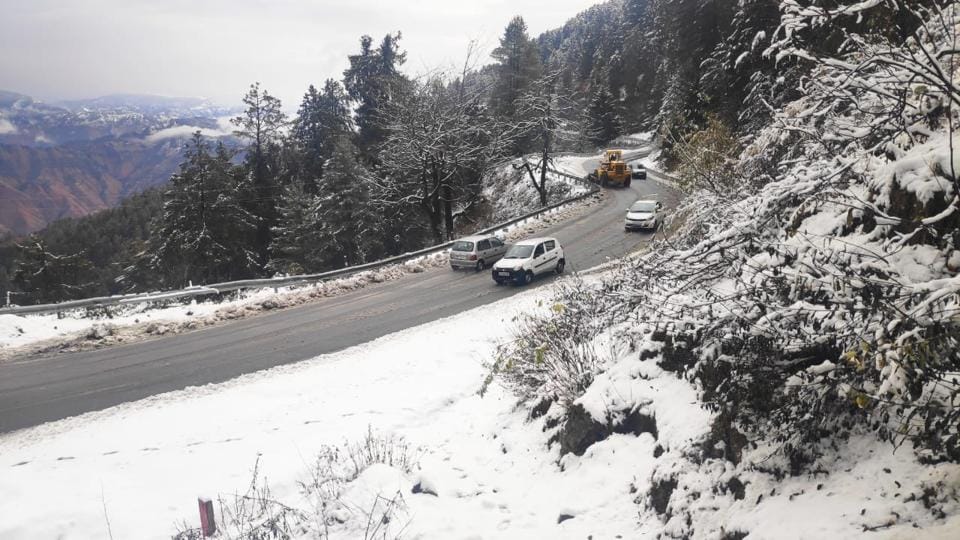 Kufri and Narkanda in the upper reaches of Shimla district received the season’s first snowfall on Monday. (HT Photo)

Himachal Pradesh’s tourist destination of Manali besides Kufri and Narkanda near Shimla received the season’s first snowfall with the temperature dipping across the state on Monday.
State meteorological department director Manmohan Singh said that snowfall in the higher reaches and rainfall in the mid-hills that began on Sunday night will continue on Monday.
The 97-km national highway number 305 was closed for traffic between between Sainj and Aut due to fresh snow at the 10, 570-ft Jalori Pass in Kullu district. Kullu superintendent of police Gaurav Singh said that roads beyond Palchan and Solang Nalla were also shut and people have been urged not to venture to these areas until the snow is cleared.
Sangla received 25cm of snowfall, Gondla 20cm, Kothi 20cm, Khoksar 10cm, Kalpa 5.6cm, Keylong 4cm and Manali 2cm of snowfall followed by 20mm of rainfall.
In Shimla district, Khadrala got 18cm of snowfall, Shilaroo 10.4cm and Kufri 7cm. Light to moderate snowfall occurred at Kharapathar and Narkanda.

SHIMLA SHIVERS AT 3.6 degrees
Dalhousie received 33mm of rainfall, Solan 27mm, Shimla 21.6mm, Una 16mm, Palampur 15mm, Dharamshala 12.6mm and Hamirpur, Bilaspur and Mandi 11mm each.
The minimum temperatures also dropped by one to two degrees in the past 24 hours
Shimla recorded a low of 3.6°C, while Kufri, 14 km from Shimla, froze at 0°C.
Manali, Dharamshala and Dalhousie recorded minimum temperatures of 0.2°C, 5.8°C and 0.6°C, respectively.
Una recorded a low of 11°C, Bilaspur recorded 11°C, Hamirpur 10.4°C, Nahan 12.5°C and Kalpa minus 0.8°C, while Keylong in Lahaul-Spiti district was the coldest with a minimum temperature of minus 3°C. A family gears up for the cold near Rajiv Chowk in Gurugram on Monday. The temperature has fallen in Delhi and the national capital region (NCR) due to rain. (PTI Photo)

Several places in Punjab and Haryana received rain overnight and Monday morning, leading to a dip in temperature, the meteorological department said.
Chandigarh received 15mm of rainfall on Monday, officials said, adding that rain up to 20mm was forecast on Tuesday.

Amritsar, Gurdaspur, Pathankot, Jalandhar, Patiala and Ludhiana in Punjab received rain, while Panchkula, Ambala, Sonepat, Gurgaon, Kurukshetra, Karnal, Jind and Hisar got showers in Haryana.
Isolated places in Haryana were also lashed by hailstorm.
The minimum temperature in the two states dropped by a few notches after the rains.
An IMD official in Chandigarh said, “The rain was the result of a feeble western disturbance that had coupled with low level easterly winds active in the region. The system will remain active in the region on Monday but the chances and intensity of rain will be less as compared to Sunday night.”
Officials added that winds up to 50km/h blew on Monday morning. The minimum temperature on Monday was 14.4 degrees, higher than 12.6 degrees on Sunday. With cloudy weather to continue, it will stay on the higher side, the official said, adding the maximum temperature is expected to take a fall during the day.

The sky remained overcast in south Malwa districts of Bathinda, Faridkot, Muktsar, Mansa, Moga, Fazilka and Ferozepur and light rain is forecast. Some parts of Bathinda, Muktsar, Faridkot and Ferozepur districts witnessed hailstorm on Sunday.
Ludhiana got 10.8mm of rainfall showers coupled with breeze, adding to the chill. While there was no change in the night temperature, the day temperature fell by two degrees to settle at 26.2 degrees Celsius. The minimum temperature was 11.2 degrees Celsius.

Manali, Kufri In Himachal Get Season's First Snowfall
Himachal Pradesh's tourist resort Manali and Shimla's nearby destinations Kufri and Narkanda were on Monday enveloped by a blanket of snow, the season's first, giving the resort and its neighbouring areas a picturesque look.
November 16, 2020
1/12 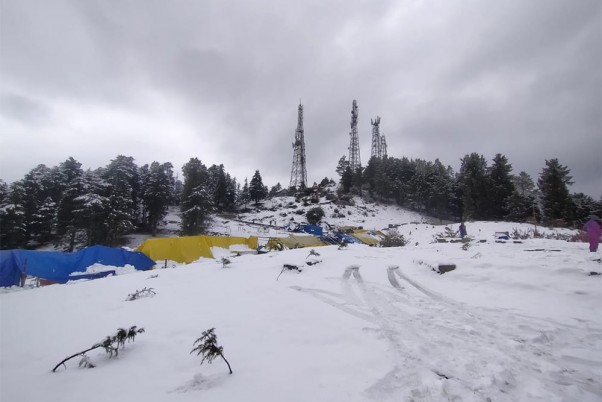 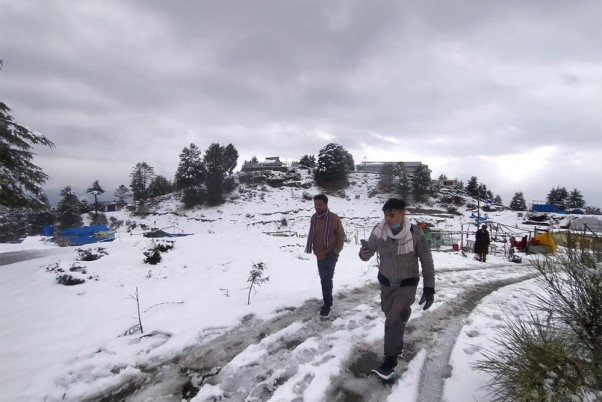 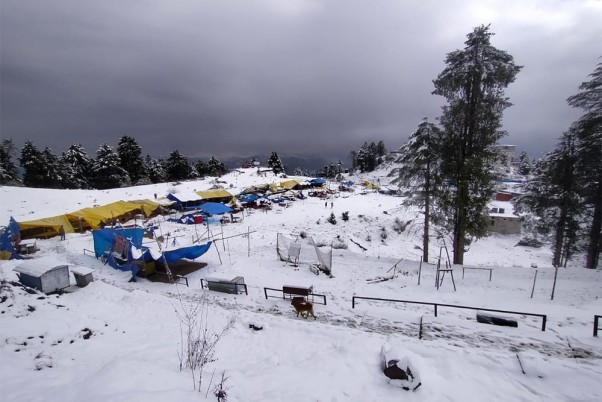 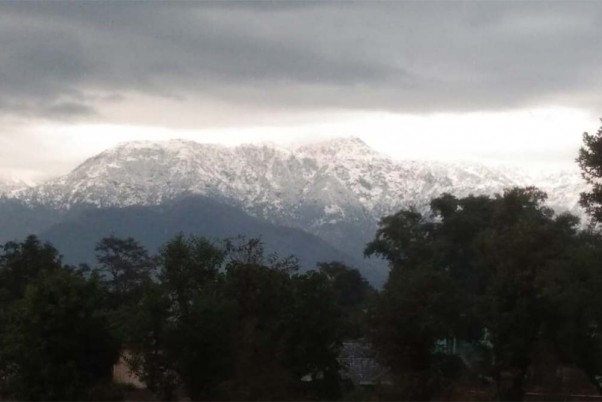 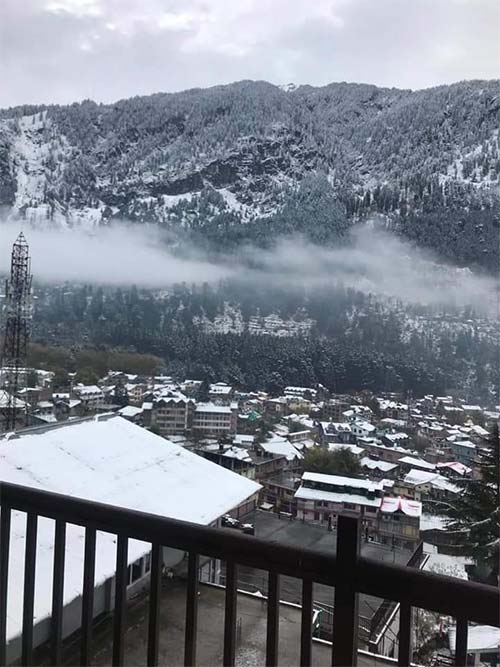 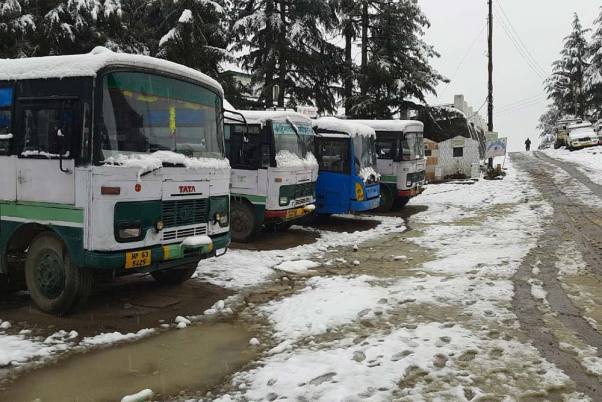 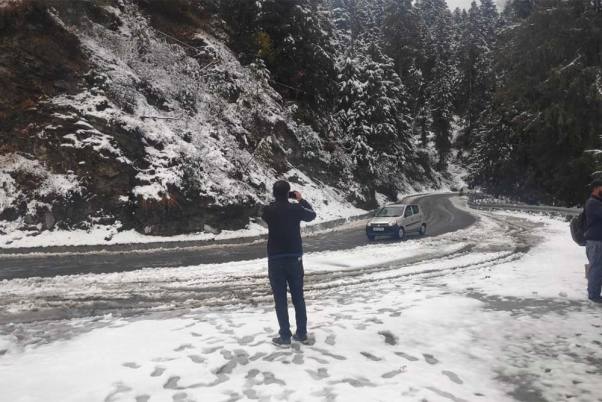 Early first snowfall of the season rolls out a perfect picture in the hills of Shimla and world famous tourists destination Manali .
Photograph by Sunil Bamba
8/12 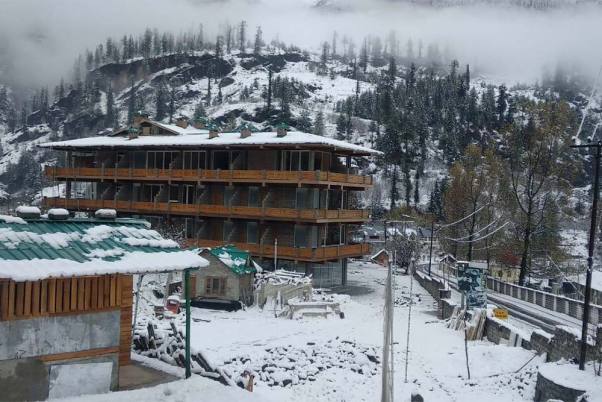 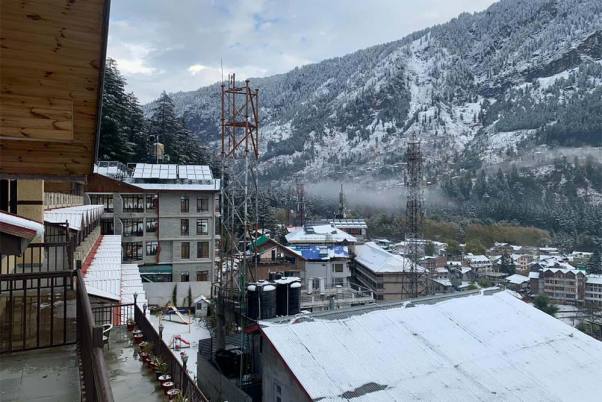 A parnormic view of Manali.
Picture by Sunil Bamba
10/12 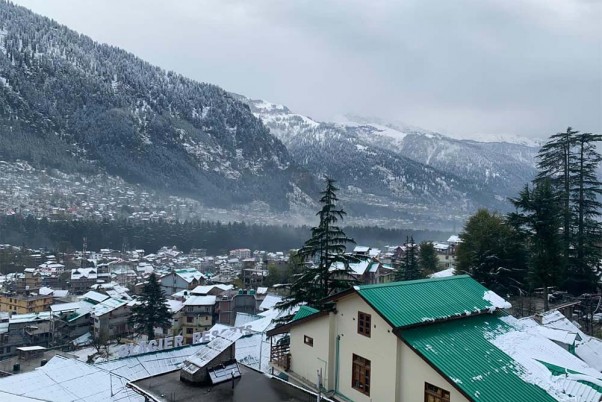 A parnormic view of Manali.
Photograph by Sunil Bamba
11/12 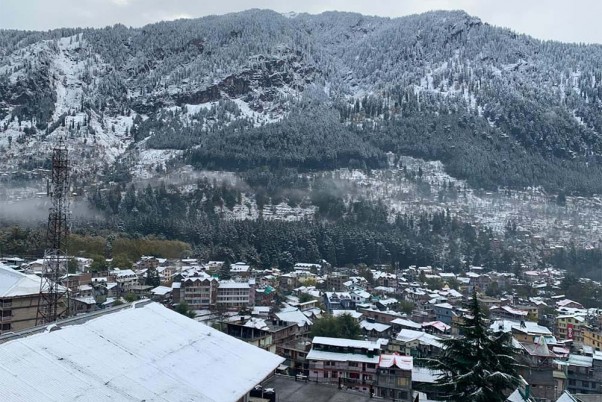 A parnormic view of Manali
Photograph by Sunil Bamba
12/12 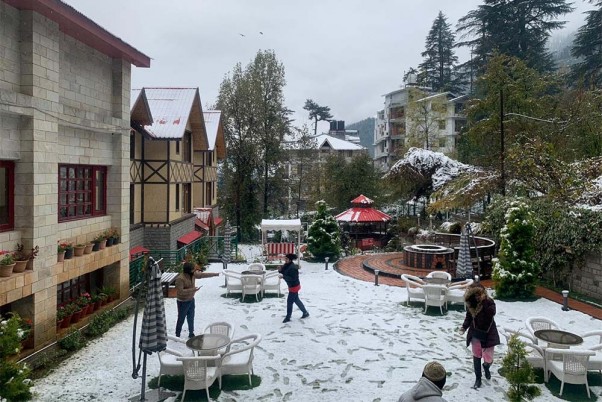 Tourists playing with snow at a Manali hotel. 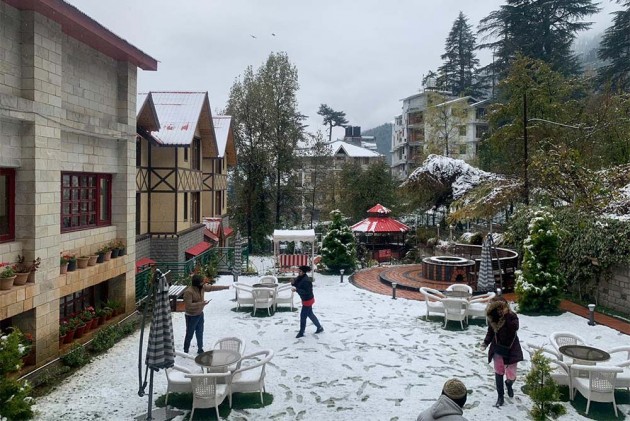 Himachal Pradesh's tourist resort Manali and Shimla's nearby destinations Kufri and Narkanda were on Monday enveloped by a blanket of snow, the season's first, giving the resort and its neighbouring areas a picturesque look.

Several areas in Manali, upper Shimla and Kinnaur districts were cut off and link roads closed as Sangla, Kufri, Narkanda, Kharaptthar and other higher hills received the first snowfall of the season. 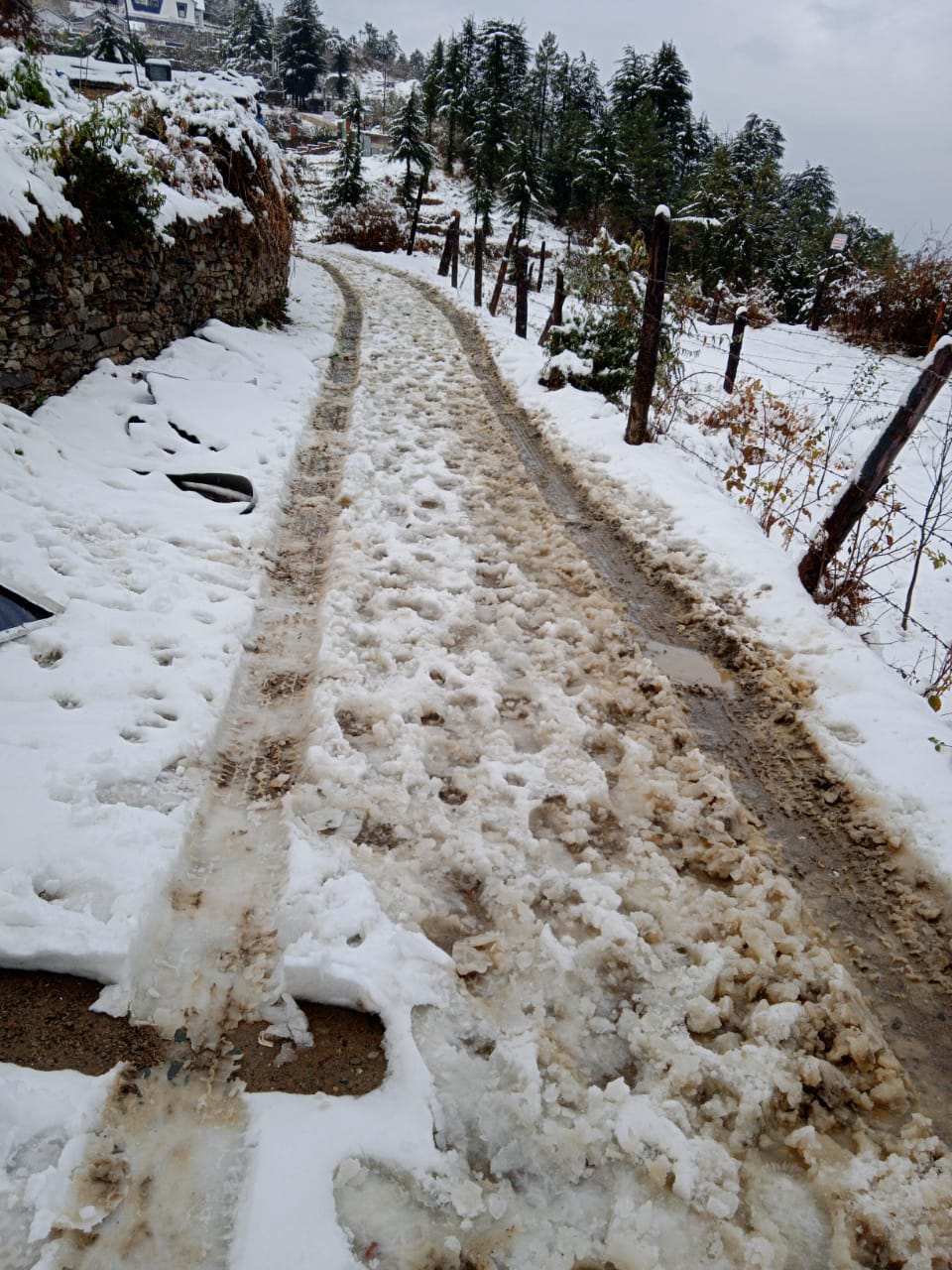 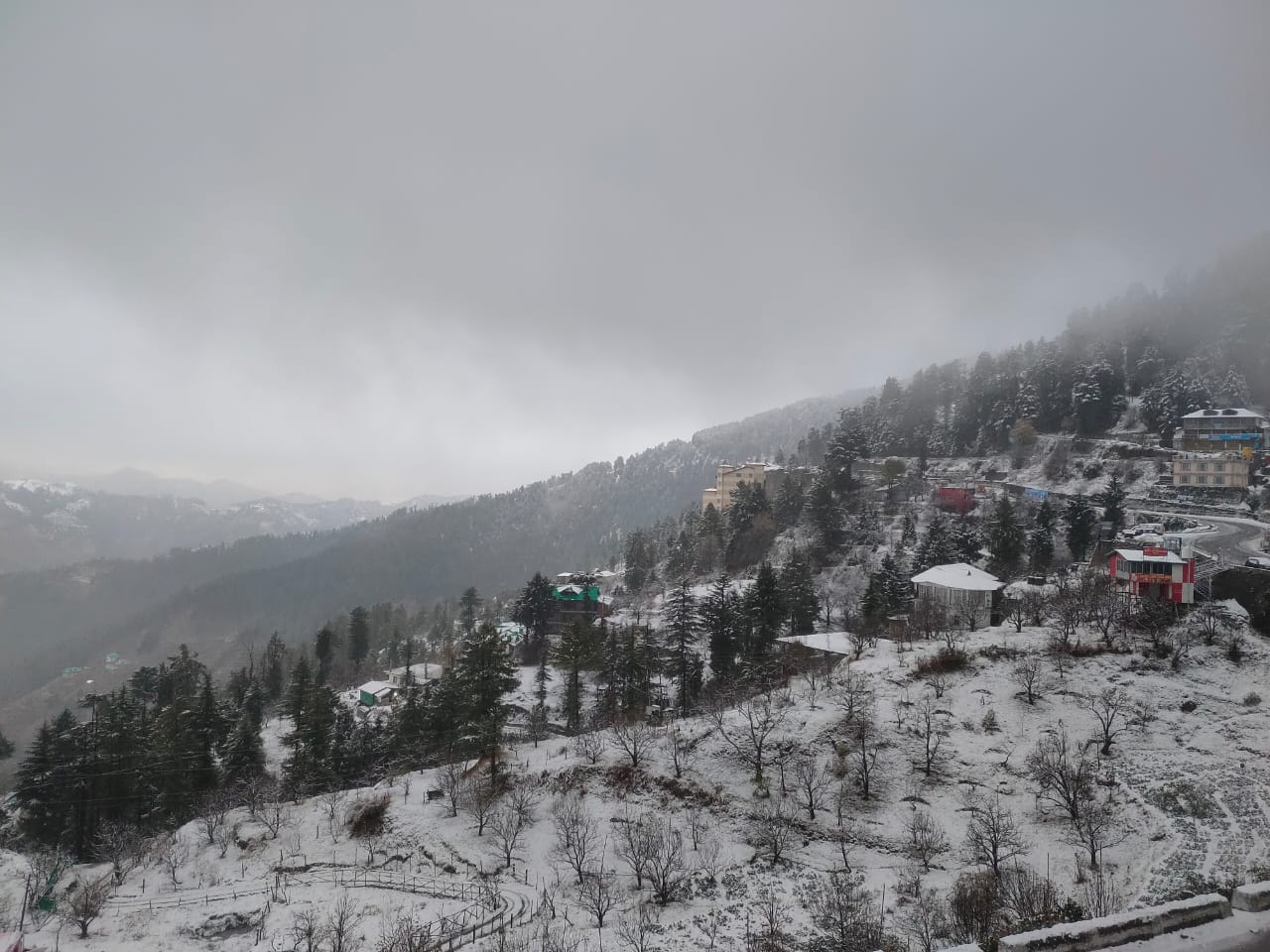 Kufri received the season's first snowfall on Monday. Tribune photo.
Roads were closed at Khadrala and telecommunication services are snapped in Jubbal area.

Narkanda received the season's first snow on Monday. Tribune photo.
Deputy Commissioner Shimla Aditya Negi said that JCBs and machinery have been deployed at vulnerable points and clearing of roads was underway.
The snow and rains brought cheers to farmers as the prolonged dry spell had affected sowing of Rabi crops, especially the maize, Cauliflower and cabbage crops and delay in rains could have spell doom.
The hoteliers are upbeat and hoping that early snowfall would attract tourists and kindle hops for the revival of an industry which suffered huge losses due to Covid 19 pandemic.
This was the season's first snow that froze Manali, Kufri, Narkanda, Kala Top and Kharapathar.
The hills overlooking Manali also experienced moderate spells of snow, an official of the meteorological office here told IANS.

He said the picturesque Kalpa, some 250 km from here, too experienced snow.
"High-altitude areas of Lahaul and Spiti, Chamba, Mandi, Kullu and Kinnaur districts have been experiencing snow since Sunday," he added.
"As news of the snowfall flashes across the plains, tourists will start arriving at Manali and the nearby hills -- and in Kufri, just 15 km uphill from Shimla, and Narkanda", say hoteliers.
The mountain peaks viewed from Shimla and the Dhauladhar peaks overlooking the Tibetan Buddhist leader Dalai Lama's official palace in McLeodganj near Dharamsala were also covered by a white blanket.
The other hill destinations of Dharamsala, Nahan, Chamba, Dalhousie and Mandi got rains.
The Met Office said western disturbance -- a storm system originating from the Mediterranean-Caspian Sea region and moving across the Afghanistan-Pakistan region -- will start receding in the region from Tuesday.
-- with IANS


#Snowfall #Himachal
Read story here: Manali, Kufri get season's first snow; see pictures
Himachal Pradesh's tourist resort Manali and Shimla's nearby destinations Kufri and Narkanda were on Monday enveloped by a blanket of snow, the season's first, giving the resort and its neighbouring areas a picturesque look.
The timely snow has brought cheers on the faces of hoteliers.
The residents of Shimla shivered as icy winds accompanied overnight rain brought down the minimum temperature.
The Tribune, now published from Chandigarh, started publication on February 2, 1881, in Lahore (now in Pakistan). It was started by Sardar Dyal Singh Majithia, a public-spirited philanthropist, and is run by a trust comprising five eminent persons as trustees.
You must log in or register to reply here.
Share:
Facebook Twitter Reddit Pinterest WhatsApp Email
Top