Pre Monsoon if it rains on Thursday only !
Clouds will be there on Thursday, day time.
Last edited: Jul 4, 2019 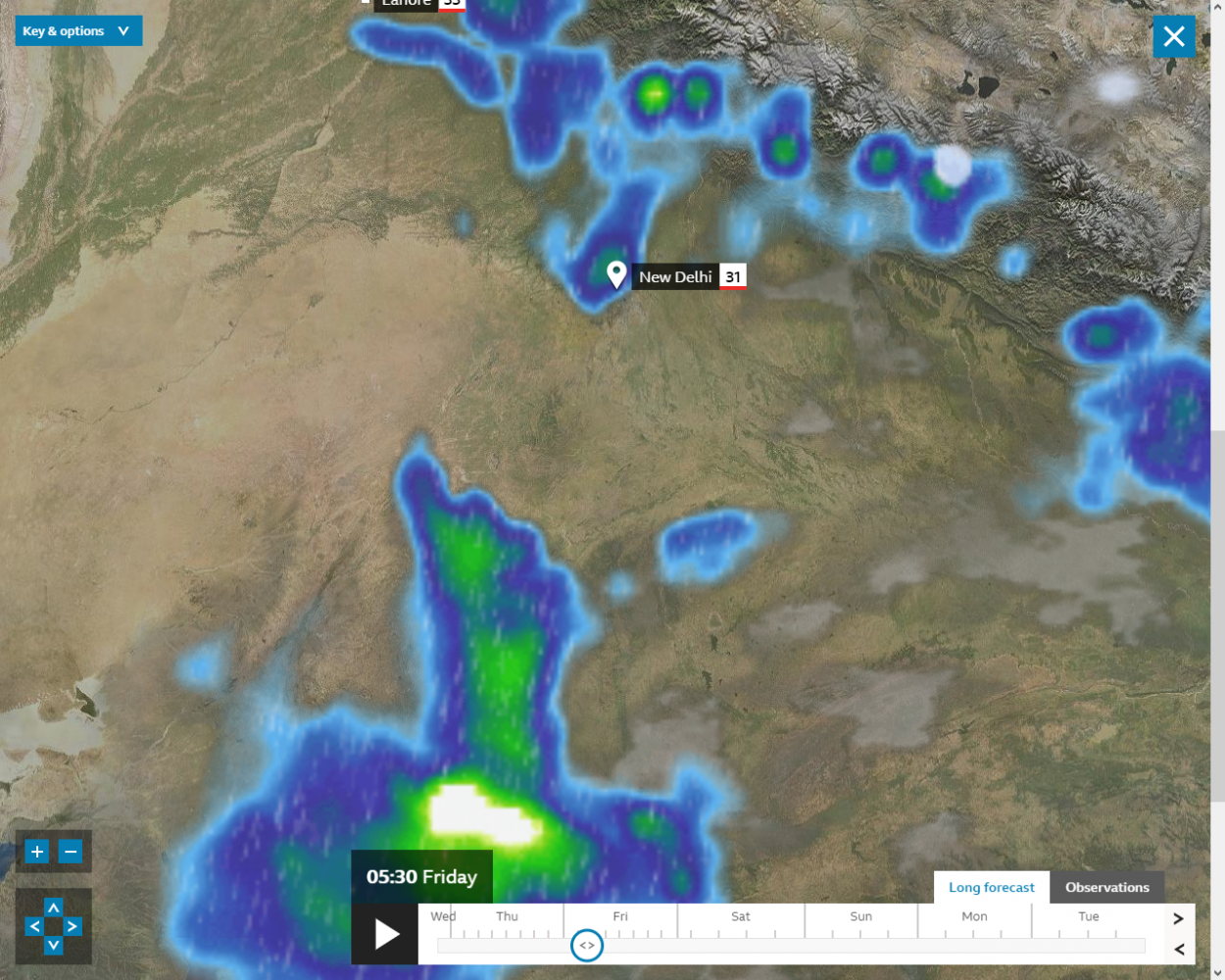 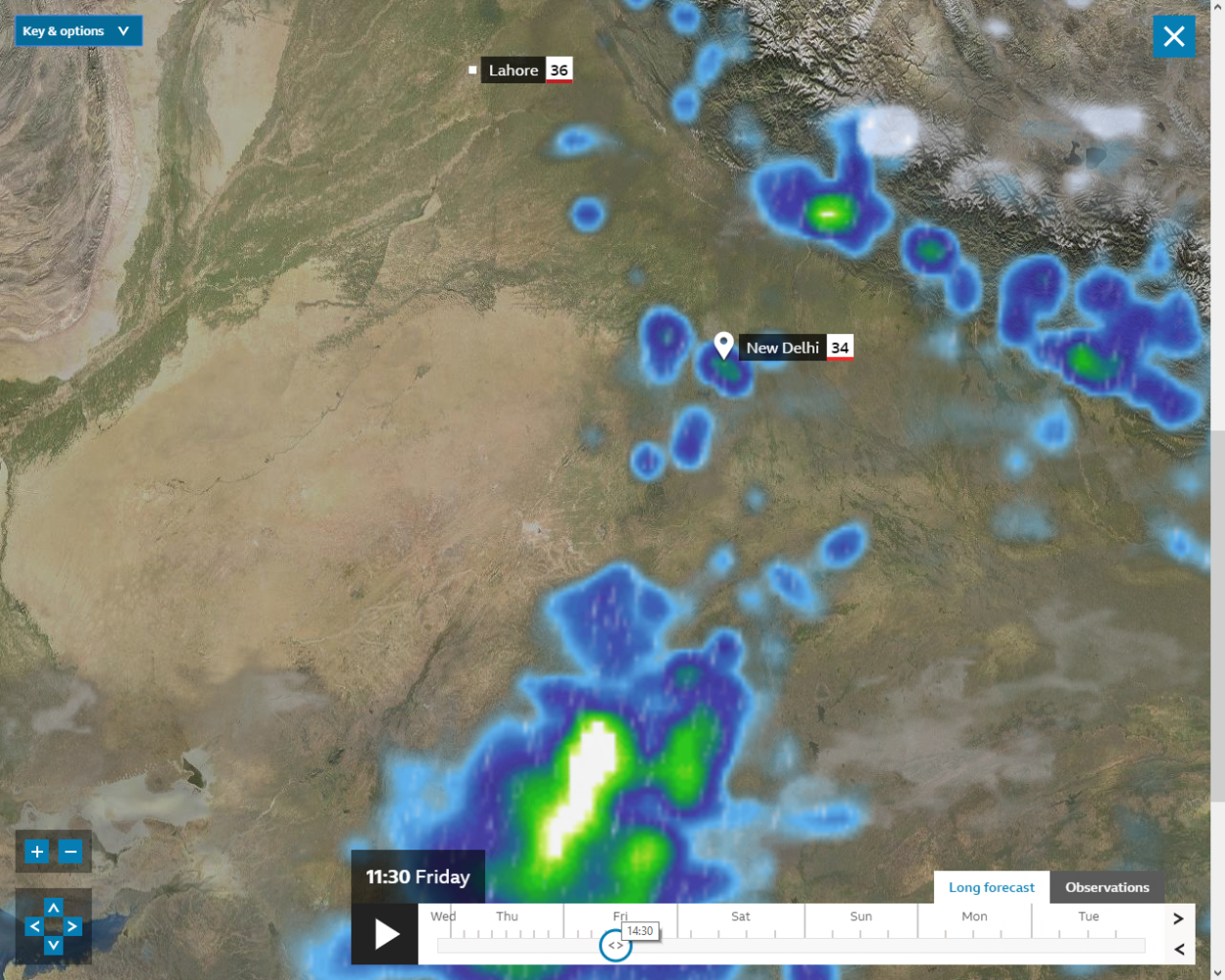 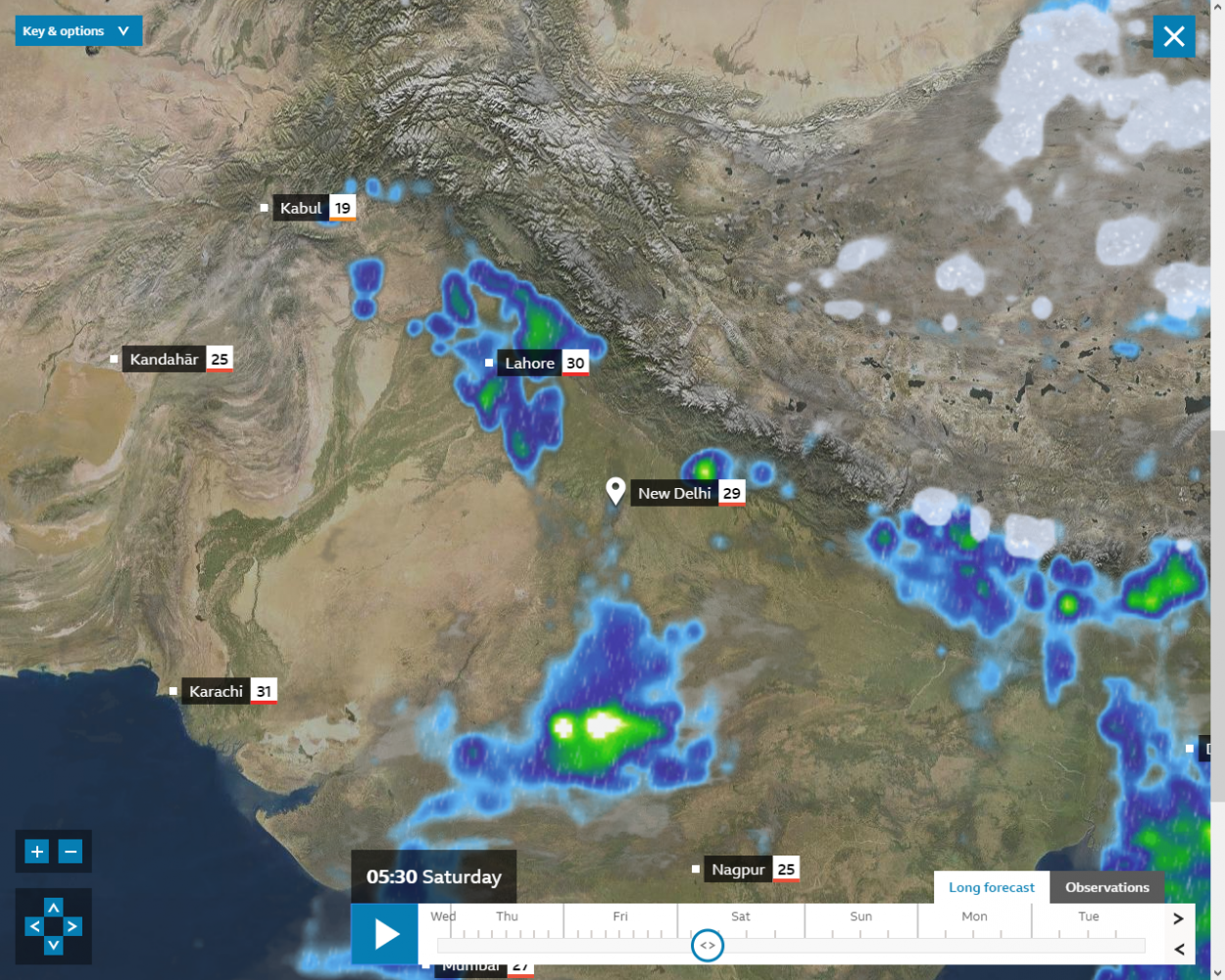 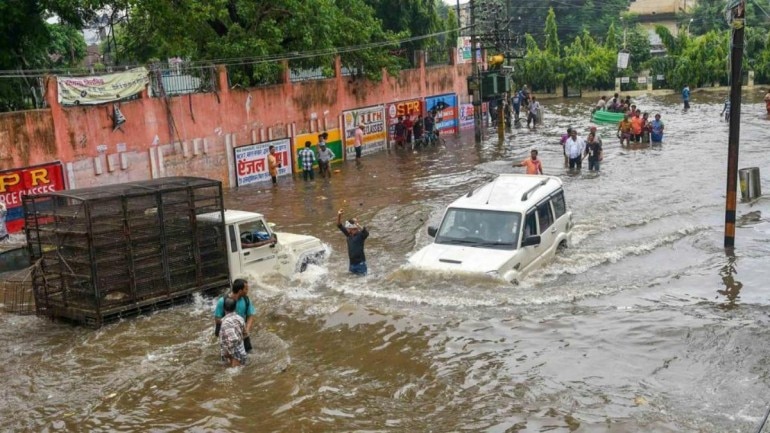 The Indian Metrological Department on Wednesday said that the monsoon rains will reach Haryana, Chandigarh and Delhi in next 48 hours.
Southwest monsoon has further advanced into some more parts of Gujarat, Rajasthan, Madhya Pradesh and Uttar Pradesh and is currently passing through Dwarka, Deesa, Udaipur, Kota, Gwalior, Shahjahanpur, Najibabad and Mandi, IMD release said on Wednesday evening.

The conditions are becoming favourable for further advance of Southwest Monsoon into remaining parts of North Arabian Sea, Gujarat, Madhya Pradesh, some more parts of Rajasthan, Himachal Pradesh, Jammu & Kashmir, remaining parts of Uttar Pradesh and Uttarakhand and some parts of Haryana, Chandigarh & Delhi during next 48 hours, the release said.
Delhi and surrounding areas have been reeling under hot and humid weather conditions, as monsoon arrival lags by almost a week. The annual date of arrival of monsoon is around end of June, however, the rain gods have remained elusive to the national capital region, Haryana as well as Punjab. The rain has however reached parts of Himachal, Uttrakhand and upper parts of Uttar Pradesh.
On Wednesday, Delhi experienced temperatures up to 38 degree Celsius with a humidity of around 65 per cent.


Monsoon likely to hit Haryana, Chandigarh, Delhi in next 48 hours


Delhi recorded its highest temperature in history on June 10 after the mercury touched a record 48 degrees Celsius. 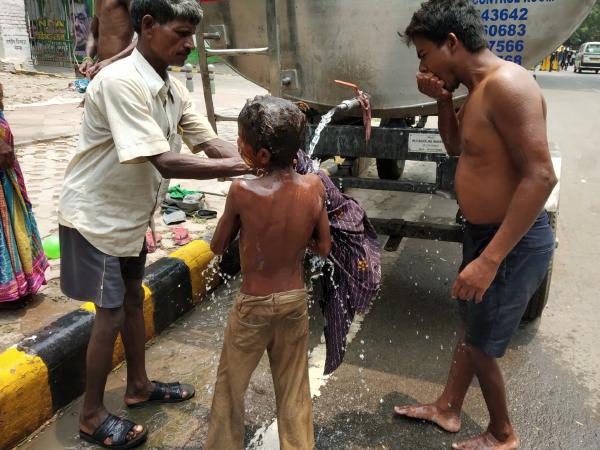 A boy takes bath on a street-side to get respite from heat on a hot summer day, in New Delhi, on July 2, 2019 | Photo Credit: IANS

New Delhi: Monsoon is likely to hit the national capital in the next 48 hours, with further advance of southwest monsoon in the northern parts of the country.

Uttarakhand is likely to experience heavy to very heavy rainfall at isolated places during the next 4-5 days due to the convergence of easterly winds from the Bay of Bengal, the Indian Meteorological Department (IMD) said.
"In association with its likely west-northwestward movement, conditions are becoming favourable for further advance of southwest monsoon into remaining parts of North Arabian Sea, Gujarat, Madhya Pradesh, some more parts of Rajasthan, Himachal Pradesh,

Jammu and Kashmir, remaining parts of Uttar Pradesh and Uttarakhand and some parts of Haryana, Chandigarh and Delhi during the next 48 hours," the IMD said in another tweet.

Heavy rains are likely to hit a few parched regions across the states including Uttarakhand, East Rajasthan, Vidarbha, Chhattisgarh,

Thunderstorm accompanied by lightning is likely to occur at isolated places over Bihar.
Meanwhile, Mumbai received the highest rainfall in a decade on Monday with 550 mm average rainfall throwing the city, its roads, train and air services out of gear.

In its report, the Comptroller and Auditor General of India (CAG) observed that drains in Mumbai can only handle 25 mm rainfall per hour as there are numerous obstructions in the larger drains due to siphons and other utility services, reported PTI.
The report further stated that out of 45 outfalls in the drains floodgates have been provided in only three of them.

The maximum city witnessed widescale waterlogging due to heavy rains that have been going on since Monday.

Monsoon likely to hit parts of Haryana, Chandigarh and Delhi between July 5 and July 6. PTI.

Conditions are becoming favourable for the arrival of the southwest monsoon to parts of Haryana, Chandigarh and Delhi between July 5 and July 6, the India Meteorological Department (IMD) has said.

However, while the monsoon is likely to arrive in this region by July 6, “typical monsoon showers” are expected only beginning next week—around July 10, said Mahesh Palawat, vice president (meteorology and climate change) at Skymet, a weather forecasting company.
“The monsoon has reached the hills of north India and easterly winds have started blowing. During the next two days thunder activity and rain can be expected in the region,” Palawat added.

According to forecasts, the north-western plains, however, are expected to witness a below-normal rainfall this season.
The IMD, in its latest forecast on Wednesday, said the monsoon had made a further advance into parts of east Rajasthan, Madhya Pradesh, Chhattisgarh, Uttar Pradesh, Uttarakhand, Himachal Pradesh and Jammu and Kashmir.

A well-marked low pressure area over north Chhattisgarh and in adjoining areas of Jharkhand and Odisha, along with the associated cyclonic circulation extending up to 7.6 km, has continued to persist in the region.

Conditions are becoming favourable for further advance of seasonal rains, likely to have a west-northwestward movement, into remaining parts of the north Arabian Sea, Gujarat, Madhya Pradesh, Rajasthan, Himachal Pradesh, Uttar Pradesh and also some parts of Haryana, Chandigarh and Delhi during the next two to three days.

Cyclonic circulation has also been persisting over central Pakistan and adjoining west Rajasthan.
Heavy to very heavy rain is expected over the west coast, east and northeast India, Uttar Pradesh, Himachal Pradesh and Uttarakhand between July 8 and 10. 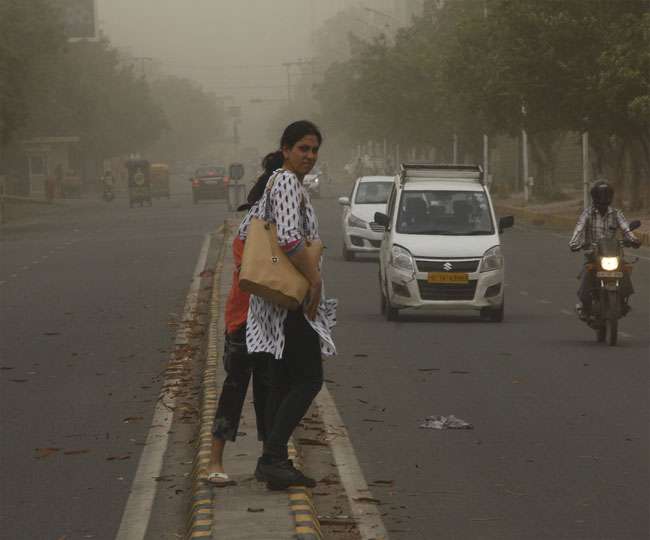 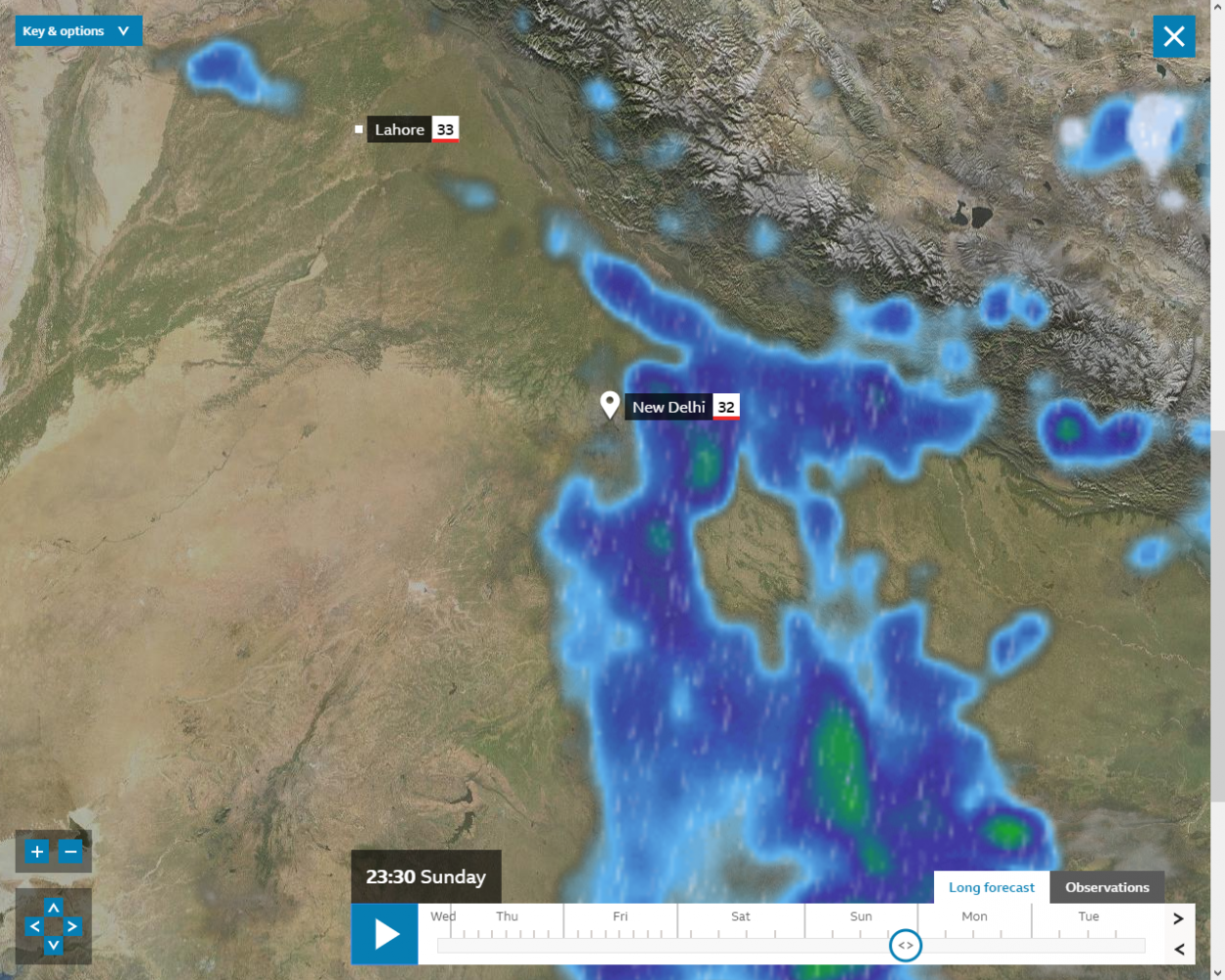 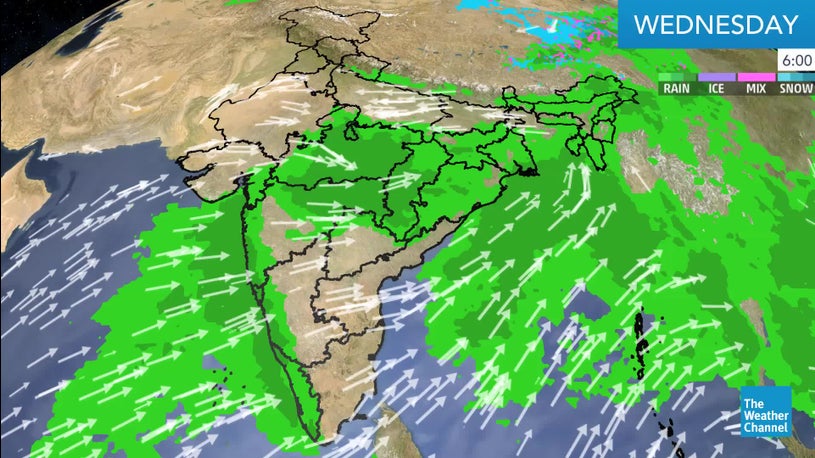 The Northern Limit of Monsoon (NLM) has further advanced into some parts of Eastern Rajasthan, Jammu and Kashmir, Himachal Pradesh and Uttar Pradesh, most parts of Madhya Pradesh and Uttarakhand and remaining parts of Chhattisgarh.

Thundery activity across Konkan to Kerala including Mumbai is likely to continue during this forecast period. Daily downpours can result in another round of flash flooding and mudslides. On the contrary, Tamil Nadu and Andhra Pradesh, which are located on the leeward side, will have dry conditions with maximum temperatures of over 40°C or more in some inland spots.

A well marked low pressure area is currently located on the border in between Chhattisgarh and Madhya Pradesh. It is likely to move westward while intensifying southwest monsoon and bringing heavy to very heavy rainfall along its path. In southern Madhya Pradesh and the adjoining areas, a total rainfall of more than 50 mm will be common whereas in the next 24 hours 250 mm of rain is likely to over the local areas.

The northern India is expected to be affected by the upcoming cyclonic circulation, the rainfall is likely to increase by the weekend. Isolated rain and thunderstorms are possible over Punjab, Haryana, Uttar Pradesh, and Tamil Nadu and isolated snow or rain are likely over Himachal Pradesh, and Uttarakhand.

The maximum temperatures will be 2 to 8 degree lower than the average in much of central India during this forecast period. While, they will be warmer than average in much of southern India. Punjab, Haryana, Jammu & Kashmir, Himachal Pradesh, Rajasthan, Gujarat, Tamil Nadu, and Andhra Pradesh are likly to experience a maximum temperature of more than 40°C on Wednesday.

Southwest monsoon is expected to advance into remaining parts of Gujarat, Madhya Pradesh, Uttarakhand, some more parts of Rajasthan, Himachal Pradesh, Uttar Pradesh, and some parts of Haryana, Chandigarh, Delhi during next 2-3 days.

There is an growing posibility of the rainfall to increase in the northern India by the weekend. Pradesh. Isolated rain and thunderstorms are possible over Punjab, Chandigarh, Haryana, Uttar Pradesh, and Tamil Nadu ans isolated snow or rain are likely over Jammu & Kashmir, Himachal Pradesh and Uttarakhand.

Maximum temperatures of 40°C or more are likely over Punjab, Haryana, Delhi, Jammu & Kashmir, Rajasthan, Tamil Nadu, and Andhra Pradesh. The air quality is likely to be poor or very poor over northern, central, western, and eastern India, especially in major cities like Delhi.