manishdelhi said:
I think this journey will be most beautiful of your life, during the train to Ladakh there are many things to do.
Click to expand...

Yes, but the question is, when would it actually get built?

I feel sad as this will create a deluge of tourists and commerce in Leh, creat8n another ugly hill station like Shimla full of congestion. Also loss of bio diversity. As it is, Leh has water issues and issues in dealing with the waste generated by current tourists. One whole charm of such places is the not-easy accessibility.
P

Yogesh Sarkar said:
Yes, but the question is, when would it actually get built?
Click to expand...

The deadline for the planning stage would be 2022, and this would take further 15 years to construct. In the meanwhile, there would be around 2-3 cost overruns and bail out by the government. Eventually once it is built it would lead to deluge of people which would worsen the ecosystem and create more problems for the locales.

If they keep the ticket prices cheap, it leads to deluge. if keep it high, the locales have nothing to gain out of it.. Catch-22

Strategically, its important to connect, but i would be concerned about how we would creatively destroy the beauty of the place.

Bilaspur-Manali-Leh rail line: Indian Railways, along with the Ministry of Defence, is coming up with a big infrastructural project which will provide all-weather railway connectivity from Himachal Pradesh to Leh.


1. The Bilaspur-Manali-Leh railway line project is set to be at the highest point of 5,360 metres above the mean sea level. This Indian Railways project is comparable only to the Qinghai-Tibet rail line of China. The 51-km long stretch from Upshi in Himachal Pradesh and Phe in the Leh district will be seamlessly connected with this line.
2. This railway project is of strategic significance as it will lie along the Indo-China border and will not just help the armed forces of the country, but will also boost tourism and overall development of the region. The Ministry of Defence (MOD) has worked on the final location survey (FLS).
3. Presently the railway connectivity in Leh is not easy. Bhanupalli is the nearest rail head, which itself is about 730 km from Leh. Hence, the region requires commuter services to offer smooth travel with other neighbouring regions.
4. On the completion of this railway line, the areas between Bilaspur and Leh such as Manali, Upshi,Mandi, Sundernagar, Koksar, Keylong, Karu, Darcha as well as other important towns of Himachal Pradesh and Jammu and Kashmir will get seamless railway connectivity.


5. With the completion of this railway project, the travel time between Delhi and Leh will also considerably reduce. The travel time through surface mode will reduce to half. As of now, it takes around 40 hours but with the opening of the new railway line, it will take 20 hours between Delhi and Leh.
6. This railway line also holds socio-cultural significance as it will boost the tourist inflow and lead to a rise of economic activities in Ladakh. It will also be beneficial for the livelihood of the local population.
7. The Bilaspur-Manali-Leh railway line has been proposed as a single track railway line and the track is expected to have major tunnels, bridges and viaducts. A total of 30 stations will be covered across this entire line.
8. It is said to be the most difficult railway project in the country and much larger than the Udhampur-Srinagar-Baramula railway line.
9. The route of this rail line passes through difficult, treacherous, inaccessible as well as rugged area. It traverse through areas with challenging geology, geography and low oxygen levels due to high altitudes.
10. The train coaches for this particular railway line will be specially built for the higher altitude and oxygen masks are likely to be present for every passenger, given that the cabin pressure in the coaches will have to be maintained at such altitudes. 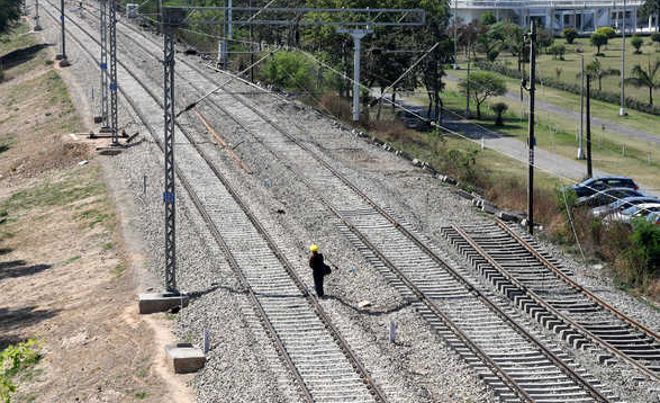 Important Link To Ladakh
After the China-India Army face-off in the Galwan valley of Ladakh, the Central Government has accelerated the land acquisition process and the alignment survey on the proposed Bhanupali-Bilaspur-Kullu Manali-Leh railway line.
The need for this strategically important project has been felt more in the past few years, as China had expanded its railway and road infrastructure near the Indian border.

The Railways authorities had asked the Mandi district administration to seek permission to engage workforce for a survey and land acquisition for the project.
Sources told The Tribune that the 498-km Bilaspur–Leh rail project had been expedited and the final location survey to be undertaken at a cost of Rs 345 crore would be completed by October.
The Bilaspur–Leh line is a proposed high-elevation all-weather broad gauge railway track that would connect Bilaspur in Himachal Pradesh to Leh in Ladakh. It would either link to the Indian railways network via an extension of the Kangra valley railway (which would be converted to broad gauge) to Mandi or via the railway line to Bilaspur from Kalka.
Mandi Deputy Commissioner Rugved Thakur said a few days ago, the Railways authorities had informed the district administration that they were going to resume surveying for the project.
Mandi MP Ramswaroop Sharma said the survey and the land acquisition process for the ambitious project had been started in Bilapsur and Mandi districts. In Bilaspur, the land acquisition process and the survey were in the final stage, while in Mandi district too, it had been accelerated.

The MP said, “We are already much delayed in expanding our railway network up to Leh, near the China border, as the neighbouring country has already done so in its territory close to the Indian border”.
The Bilaspur–Leh line would be the highest railway track in the world, overtaking the current record of the Qinghai–Tibet railway line.
Once this railway line is completed, Leh will be directly connected to Himachal Pradesh and the rest of India. This would increase tourism in Himachal Pradesh and Ladakh and facilitate quicker movement of troops and equipment. This is one of the four important railway connections along the China border, identified by the Defence Ministry.


MANALI: Planning to take a leap ahead of China and Pakistan, India has expedited efforts to connect Ladakh region with a railway line. Final survey, alignment and land acquisition for the ambitious Bilaspur-Manali-Leh track, the highest in the world, have been speeded up in HP .
According to sources, all the infrastructure projects along the border, including Rohtang tunnel and Leh railway line, have been expedited following the unrest between India and China. Initial marking of the track on Bhanupali-Bilaspur-Mandi-Manali section has already been done. Now, the Northern Railway is carrying out final alignment and land acquisition starting from Bhanupali in Bilaspur. The process may take a few months to complete. The main challenge in alignment will begin beyond Manali, as most of the line will have to pass through tunnels. However, there will be no problem in land acquisition as the whole area has thin population and land is mostly owned by the state government. "Land acquisition has started from Bhanupali in Bilaspur district and surveys have begun in Mandi district," Mandi MP Ram Swaroop Sharma said, adding that the project had been delayed for a long time but was now being expedited in the larger interest of the nation.
As Covid-19 pandemic had become a major roadblock in final location survey (FLS) and land acquisition process, the officials first sought permission from local administrations. Mandi deputy commissioner Rugved Milind Thakur confirmed that he had received an online formal request from the railway officials.
Executing the 498-km-long Bilaspur-Leh all-weather railway track will be an engineering feat. Then railway minister Suresh Prabhu laid foundation stone to start FLS on June 27, 2017, which will complete by October this year. The FLS will be completed at cost of Rs 345 crore, while the entire project was estimated to be worth over Rs 83,360 crore.
Xining-Lhasa railway, which opened in 2006, is the highest railway line in the world with maximum elevation of 16,627 ft. With highest railway station at an altitude of 17,582 ft at Taglang La, Bilaspur-Leh railway will become the highest in the world.
The project, which of massive defence interest, will not be a revenue earner for the government though. 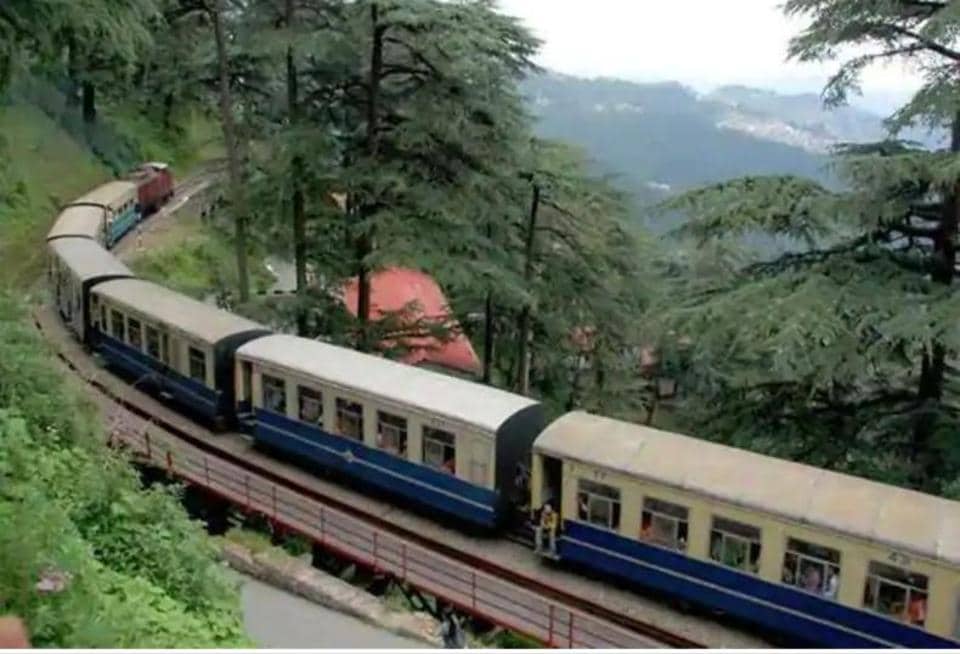 State transport minister Govind Singh Thakur has urged the railways and the National Highway Authority of India to conduct a joint survey to curb land sliding along the world heritage Kalka-Shimla railway line. He said that safety measures such as building parapets and retaining walls will be undertaken to check landslips.(PTI file photo)

Shimla: The Himachal Pradesh government will accord priority to building the strategic 475-km Bhanupali-Bilaspur-Manali-Leh railway line, state transport minister Govind Singh Thakur has said.
Reviewing railway projects in the state at a virtual meeting on Thursday, Thakur said that in view of the nation’s security, land acquisition for the project will be expedited.
As many as 22 surveys have been conducted through satellite imagery for the rail line on which 30 stations have been proposed between Bhanupali in Anandpur Sahib tehsil of Punjab’s Rupnagar district and Leh.
A survey has also been proposed to be conducted with the help of radar.

The state transport minister urged the railways and the National Highway Authority of India to conduct a joint survey to curb land sliding along the world heritage Kalka-Shimla railway line. He said that safety measures such as building parapets and retaining walls will be undertaken to check landslips.
The minister directed that formalities be completed for land acquisition for the Una-Talwara road.
Chief general manager, Ropeway and Rapid Transport System Development Corporation (RPDC), Ajay Sharma conducted the proceedings of the meeting that was also attended by principal secretary, transport, KK Pant, deputy commissioners concerned and officials of the forest department and National Highway Authority of India.

adsatinder said:
They made it by making it better than German Engineers.
Check Discovery Series : How Chinese made Railway in unstable area of Tibet.
It may not be available on Youtube.
But Discovery repeats its telecast after sometime.
The area is not stable is different extreme weather conditions.

1.
Uploaded on Apr 24, 2011
Qinghai-Tibet Railway is the world's highest railway, with the world's highest rail tunnel. The first part of this video explains the enormous engineering challenges of this ambitious project and how each challenge was overcome. The second part of the video presents a special trip from Beijing to Lhasa with the most amazing views along the way.

3.
Uploaded on Dec 24, 2007
Highest Railway in the World ! Running at altitudes of 4000-5200 m (16.000ft). Most of the track is laid upon permafrost soil. 4000 km from Beijing to Lhasa: The mega-project was accomplished in 2006, one year ahead of schedule. It took 38.000 Workers 5 years. They had to wear oxygen bottles most of the time to avoid altitude sickness. Thousands of bridges and tunnels were built. A Swiss Consulting firm concluded the project was not feasible due to unstable permafrost soil. So Chinese Engineers designed special cooling systems for summer time to assure support structures will not sink into the mud. Travel time to Lanzhou is now cut to 30 hours and to Beijing 50 hours. Compartments are pressurized and oxigen masks are provided if needed for each passenger.

Author's Notes: Cabin staff is friendly and helpful even if nobody speaks or reads a word of English. It's a joke when they try to check your passport.
Restaurant staff is particulary unpleasant to foreigners. Food is poor and the menu is good only for those who read Chinese. Staff will say most of the time "meiyaou"(no have)while the Chinese at the next table are having full meals.
Even in soft-sleeper class bring your own tea mug. Restaurant does not serve beverages , but cabin staff will provide hot water.


In India they go for money only.
Innovation is not an Indian Word.
Only "Jugaad" is enough !

Example is Rohtang Tunnel as it is being made manually.
Still not using Tunnel Borer Machines of Metro Rail Technology for underground tunnel making.
Click to expand...