In the just submitted Railway budget, the Railway Minister has mentioned Leh twice in the budget speech.

Here are the excerpts

In view of the recommendations of the Parliamentary Committees and demands from various Border States, I will pursue for approval of certain projects identified as being of national importance viz. Bilaspur-Manali-Leh, Jammu-Poonch via Aknoor, Tanakpur-Bageshwar and Parsuramkund-Rupai. I also propose to take up a new line between Firozpur and Patti for providing direct rail link between border areas of Firozpur and Amritsar/Atari.

93. I propose to undertake following surveys during 2013-14:
New Lines
51. Srinagar-Kargil-Leh

Rail connectivity is not impossible, but God only knows, how many years it would take.

BenHur said:
....
Rail connectivity is not impossible, but God only knows, how many years it would take.
Click to expand...

Three years......if given to the Chinese as a turn key project.

anupmathur said:
Three years......if given to the Chinese as a turn key project.
Click to expand...

& thirty years for Survey only, if it remains under the current process.

knowing indian railways , these idiots will make it an overnight train <if ever>

BenHur said:
So four years gone on the drain after it was originally envisaged

Didn't I mention 30 years, in my statement above. This is the basic lead time taken by Govt of India.
BTW, If you check the running project like Rohtang Tunnel, their first survey took place long long back.
Also, there are passes like Razdaan, Sinthan for which Survey have been completed years ago, the projects are yet to start.

What is the status so far ?

The government has kick-started the process of building four top-priority strategic railway lines along the China border — a project that had been stuck in deliberations for years for want of a political decision at the highest level.

Last week, at a high-level meeting with officials from the Planning Commission, Defence, Railways and Finance ministries, the PMO finally asked the Railways to carry out detailed engineering survey of the 1,000-odd kilometres of lines identified by the Defence Ministry as strategically crucial. They are in Arunachal Pradesh, Assam, Himachal Pradesh, and J&K. 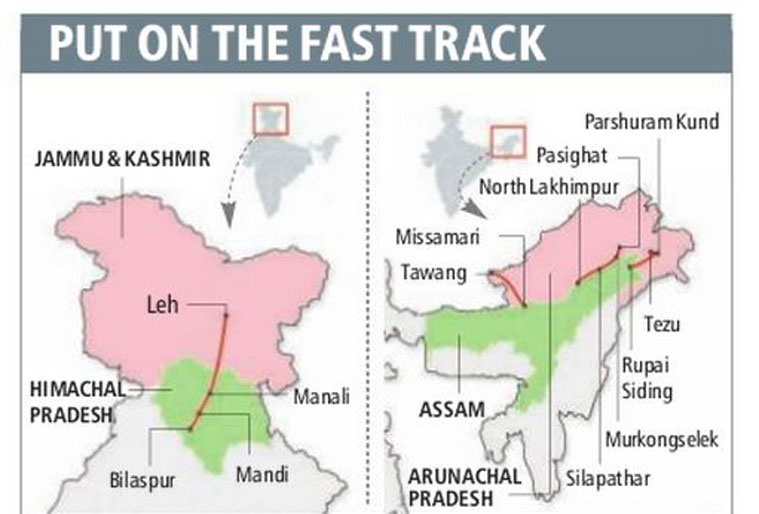 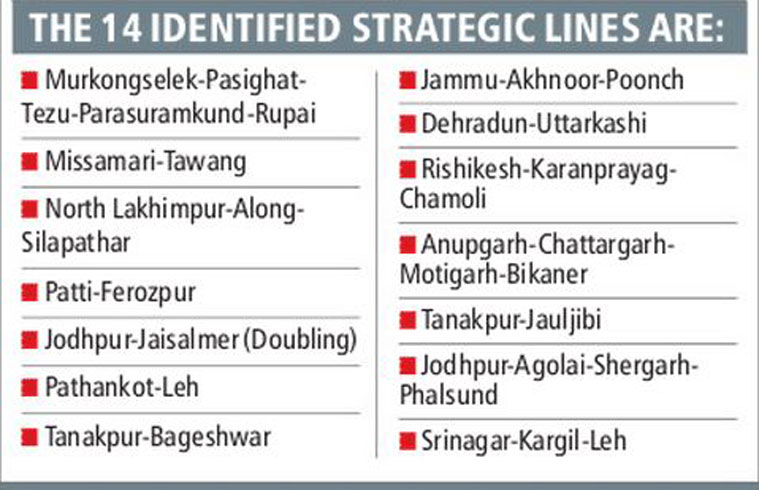 The Railways has been given time till next month to come up with a cost of the detailed survey, which will be borne by the government (Defence/Finance). Sources said the cost of the engineering survey could be around Rs 200 crore.

The Railways has informed the PMO that the topography and the geology is such that most of the lines are in the fault and folds of the Himalayan range, which involves stupendous engineering challenges. This means boring railway tunnels through geologically treacherous terrain.

“We had quite a few geological surprises holding up the numerous tunnel works in the Kashmir line many years ago. From that experience, we are sure that these lines will also throw up such surprises. So the detailed engineering survey has to be thorough,” said a Railway Board source.

The survey will take around two years to complete but sources in the Railways said given the priority attached to it, they might be asked to expedite as well. But a detailed engineering exercise like this cannot be needlessly rushed as well, officials said.

These four lines are part of the 14 strategically important lines of the armed forces to be used presumably for supplies for the Army and troops movement in times of need.

The list was drawn up by the Services based on inputs from the operational commands and validated from an operational and logistics perspective. All these years, the government had been indecisive about who would fund the lines. Railways had been telling the government that it would make the lines but cannot fund it because of financial difficulties and also citing the fact that the lines were not part of its operational needs. The matter had been stuck at that.

Soon after coming to power, the new government has been holding meetings at the Cabinet Secretariat level to arrive at the decision on this. The lines are part of the government programme of building permanent transport infrastructure along the international borders for strategic purposes.
Last edited: Dec 18, 2015
You must log in or register to reply here.
Share:
Facebook Twitter Reddit Pinterest WhatsApp Email
Top