adsatinder said:
Google failed to make me reach from Tawaghat to Dantu !
LOL !

Sorry, we could not calculate directions from "Tawaghat, Uttarakhand" to "Dantu, Uttarakhand 262545"

On normal map Google shows road till Sabla only.
Even Chal is not reachable / showing not accessible by road !

Paaji you are correct, no map shows signs of a road after sobla. I got the confirmation from a friend of mine about the road status and its condition and also on the available home stays.
Last edited: Apr 25, 2019

..so here we are with the plan which was made for 19th October-2018 with Gullu, KK and Tunda. Don't get confused, all these are nicknames.
Tunda had already booked his flight tickets from Banaras and Gullu arrived in the morning from Dehradun. KK who lives in Rohini picked Gullu from ISBT and Tunda from Noida and I was picked by them from Ghaziabad. We started with our journey at the scheduled time only, 6 A.M. It was the beginning of the Winter season and smog has already started its effect of hitting the people in the city. We sighed a relief for 4 days which we will have to spent at the foot of our dazzling Himalayas.

We picked our route via Khatima and Tanakpur - which was a very big mistake, Pitthoragarh was our destination for day-1. However we ended up landing at Lohaghat, 50 KM short of Pitthoragarh. We kept on cursing the bad roads which started from Tanakpur till Lohaghat and we thought of may be this was not the end of it we could see more of it till Pitthoragarh or till Dharchula. We have been hit very hard with the route we choose and by the roads plus the hovering dust all over gave us a feeling that the smog from the plains hasn't even spared the mountains.

We reached Lohaghat at 8 P.M. I haven't had any idea of the location so I searched on google about the KMVN rest house at Lohaghat which I have heard from my fellow traveller friends. I quickly traced it on the map. Through the zigzag lanes, we reached there in an hour. The place looked desolate with only two houses sitting exactly adjacent to each other was at our sight. It also had a shop where the owner was not present. Everything there was so calm even I can feel the sound of my own breath.

We Inquired about the rooms from the care taker present there and got one. We zipped out the baggage and placed in one of the rooms which they have allotted to us. The rooms looked great and spacious, the entire KMVN property was once a British Heritage lodge and the same got converted to KMVN when purchased by the Government - told to us by the caretaker.

Soon we started with the rounds of scotch which we carried along and danced on the tunes of some flamboyant garhwali music, thanks to me as I have fed many famous Garhwali songs in my phone. We had our dinner and quickly retired to our poor bed, why poor? as it held close to 400 Kg weight at that night, yes all four of us slept on it draped with 5-6 rajai. Brotherhood we say but all of us agreed to the fact that it was very chilly

In the morning when we came out of the guest-house the beauty of that moment was right there. The place now was full blown with the lights from the sun and it indeed was a beautiful sight. One can have an entire glimpse of the Himalayan range starting from Shivalik ranges in North and Nepal ranges to its east. The place looked majestic with the backdrop of a garden which was blooming with many varieties of flowers. That was KMVN-Mt.Abbot told to us by one of the care taker, situated at an height of 6,000 Ft from the seal level. We realised how bad was our Day-1 and the sighting heavenly compensated the feeling which we had about the route and the roads. it was a good stay for us at the place which was unknown to all of us.

We started at around 6.00 A.M from Lohaghat (KMVN-Mt.Abbot). Our Destination for the day was Dugtu. Roads began to show some improvement since the time we started from Tanakpur. We reached Pitthoragarh at 10.00 P.M had a quick breakfast at one of the local points and started onward. We reached Dharchula at 12 P.M. 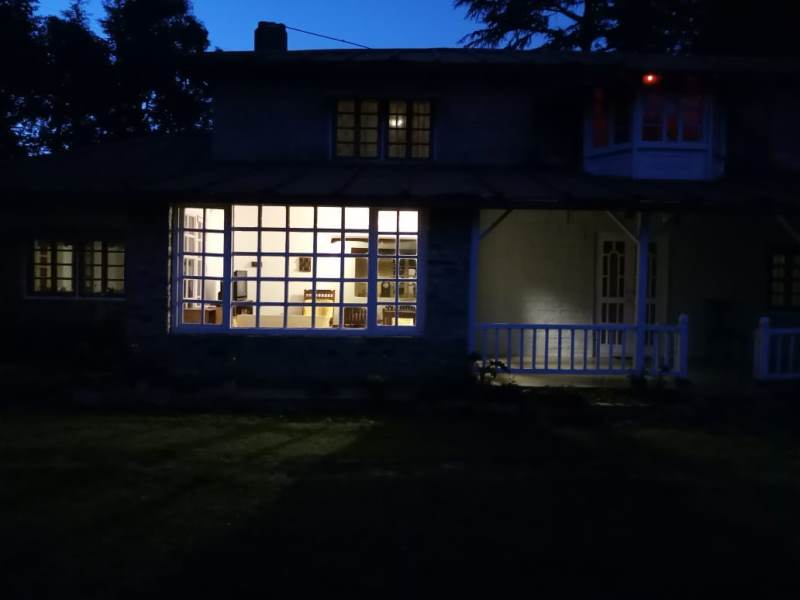 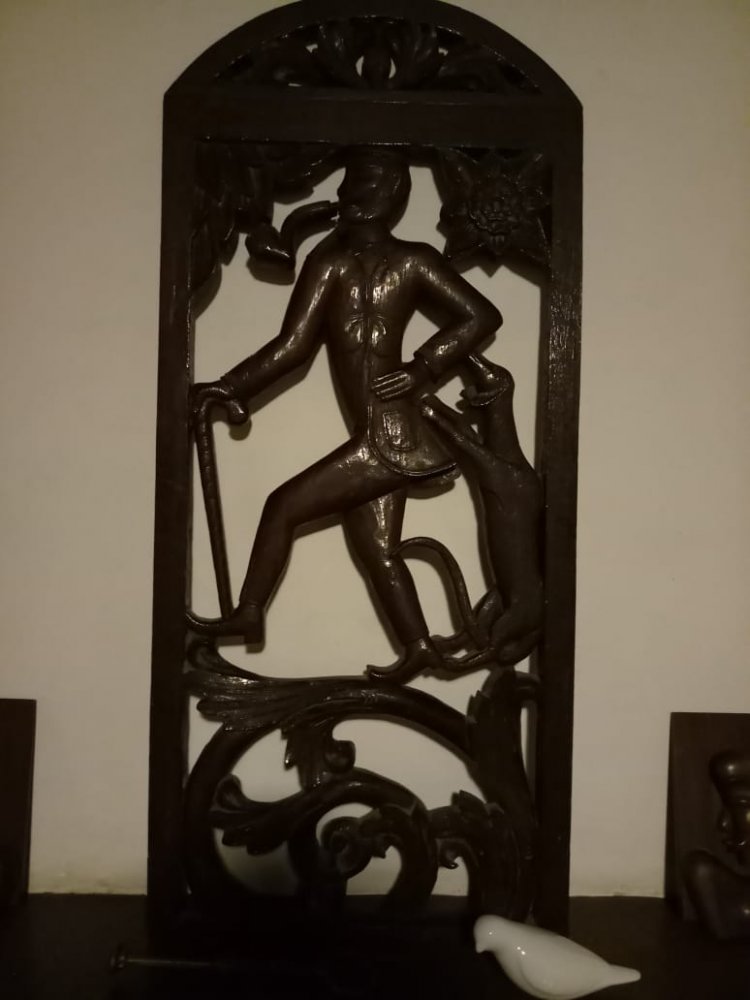 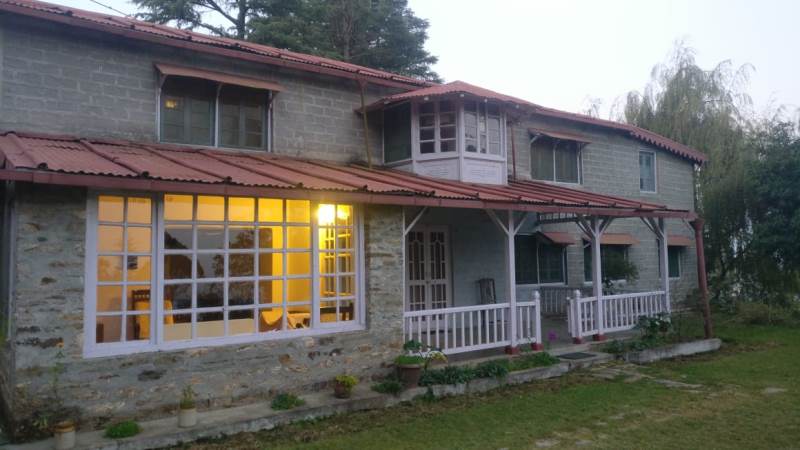 Garden on the sideways 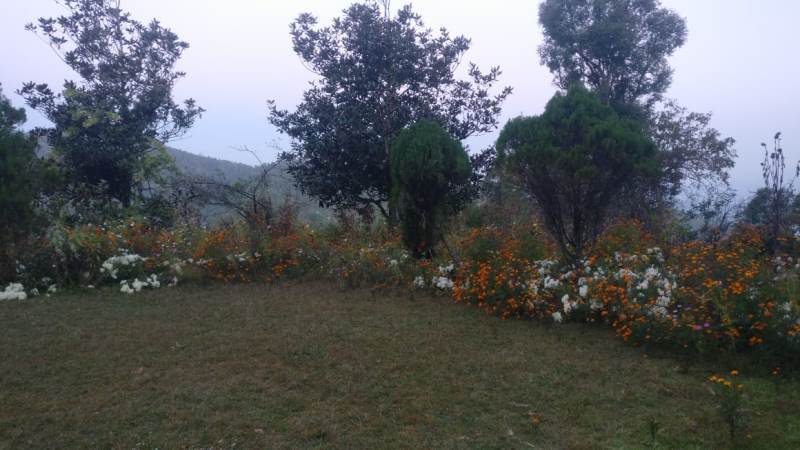 Gaurav Dutt said:
Paaji you are correct, no map shows signs of a road after sobla. I got the confirmation from a friend of mine about the road status and its condition and also on the available home stays.
Click to expand... 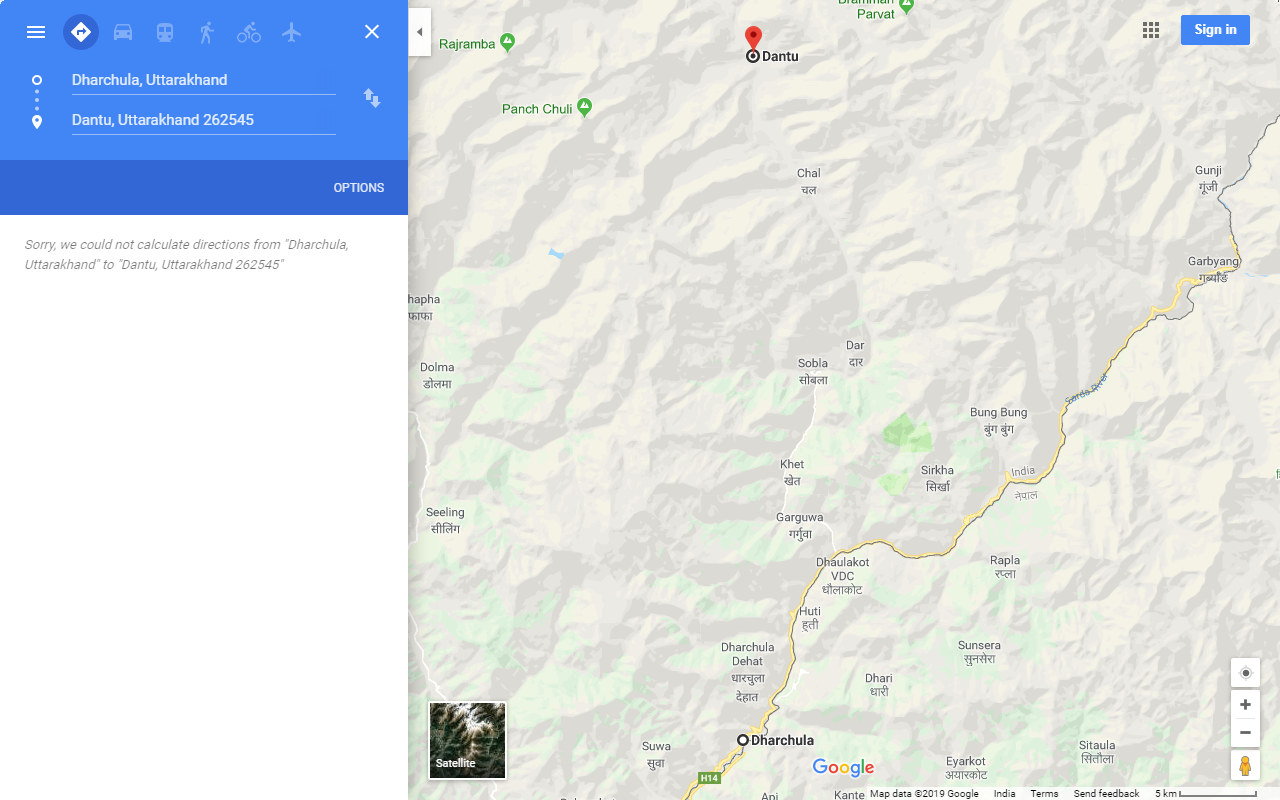 Very interesting Log about unknown place, Gaurav. You must be the first from our forum to do this. Compliments.


SHEKHAR 257 said:
Very interesting Log about unknown place, Gaurav. You must be the first from our forum to do this. Compliments.
Click to expand...

Hehe, Shekhar bhai, I am not sure if I am the first one here, but your comment put a smile on my face.
Thanks Much...

Nice brother, waiting for next part..

Dharchula looked as if it was carved out from the mountain itself, the place was surrounded by high unnamed peaks with Nepal on the other side which was a few meters walk ahead from the Main market. We had a light lunch and inquired about the route to Darma valley, with their confirmation sealed in, we started on wards.

The landscape began changing the colors and everything turned to green. Even the smell changed, for some 19 KM we travelled on a perfect black tarmac road on the Kailash Mansarovar route and at Tawaghat the road bifurcated, right one goes to Gunji and the left was for Dugtu. One of the Policemen at the check post warned us to be very careful at some of the stretches as the road ahead was not good and a silly mistake can make us believe that this is how we were destined to die far away from our homes.

We moved ahead with a thought that we will reach easily but it took us six hours to reach Dugtu which was merely 50 KM from Tawaghat. Yes there were numerous nallahs which our car crossed and those were not smalls but ferocious. In total There were 5-6 big river streams that we crossed and on passing each of them the heart beat skyrocketed to the maximum level. I was imagining this was October, the onset of winter, what in case if we have planned the same trip in monsoon, it would have been a clear case of "AA BAIL MUJHE MAAR".

We reached Dugtu at 8 P.M. We couldn't find anybody with whom we can inquire about the home stays available, we headed further and saw few people standing on the road. One of the guy from the group told us that there is nothing available and we need to go to Dantu which was on the adjacent hill and at the end of the road, he pointed towards the single brimming light on top and told us about the accommodation there which was managed by a young lady and her sister. We in a blink started the car and moved further, what came dreaded was - that we need to cross one more stream to go to Dantu. It was all dark and cloudy and through the lights of the car we could only manage to see the river flowing from an upper course and has a strong erosion. We have no idea how deep and how long it was. With mixed thoughts, we moved ahead with numb minds, In between Gullu who was on the wheels of the car suddenly turned and told us that he is taking right with the course of the river as he cannot see any road on the front. We all were partially out from the windows of the car so as to tell gullu about the way mutually screamed out loud "Gullu Aage, Right Nahi, Right mei Beh Jaayenge". He went clueless for a second and moved straight. Luckily we crossed the stream and had a sigh of relief. It has been close to 6 months and still gullu is trying to figure out what made him think that way. Why right - probably He doesn't love us anymore!? - It was not Gullu's fault, actually nothing was visible from the Driver's seat.

We reached Dantu and made our-self comfortable after a long and tiring journey in one of the home stays available. It was freezing cold. The dinner was simple and served quickly. With thoughts of making it early to catch a glimpse of the first rays of the sun on the panchachuli peaks which was just a hand away we retired to our beds.

Dharchula, visible from the top, En-route to Tawaghat 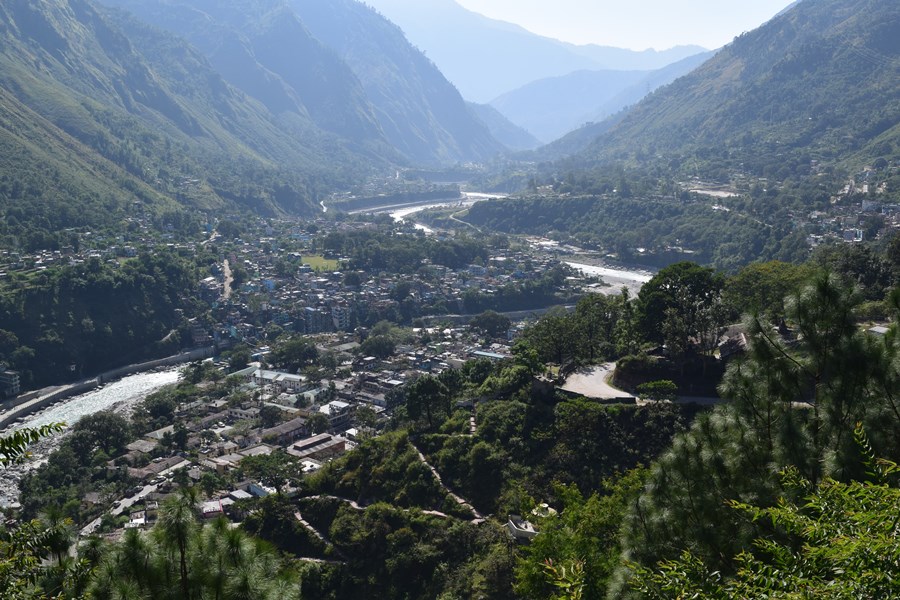 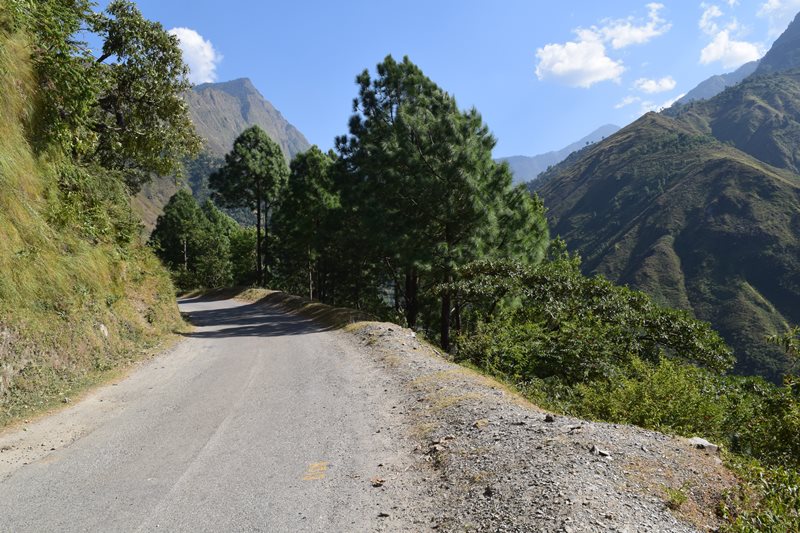 Tunda - KK - Gullu On the Wheels, En-route To Tawaghat 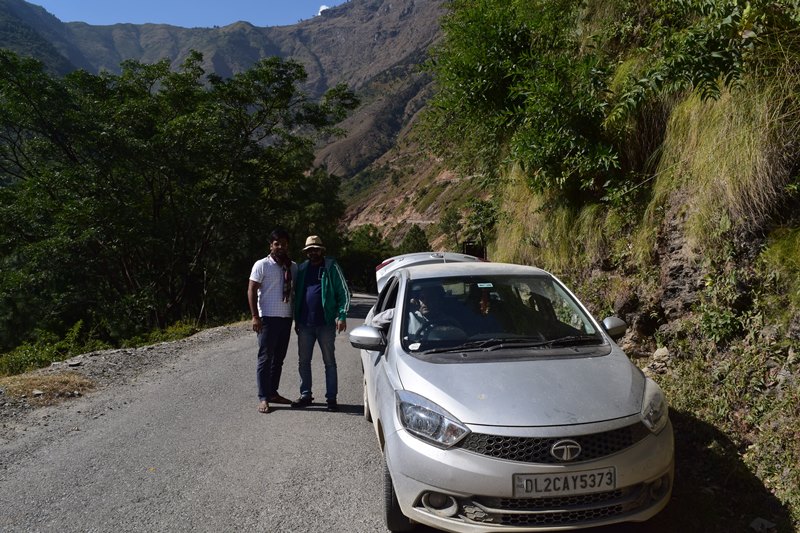 Left is India, To the Right across the River is Nepal, En-Route to Tawaghat 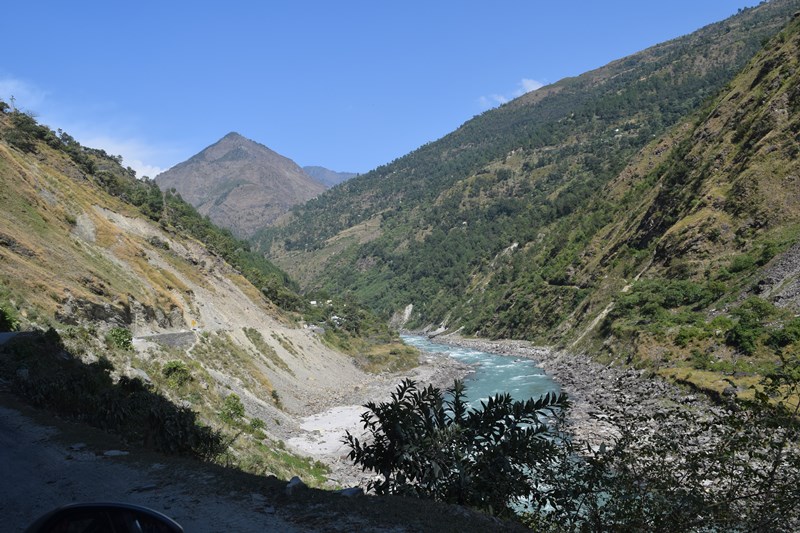 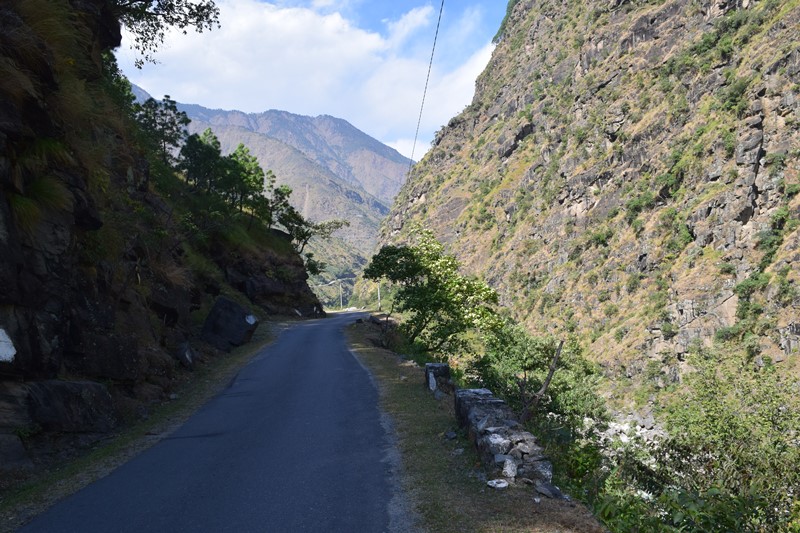 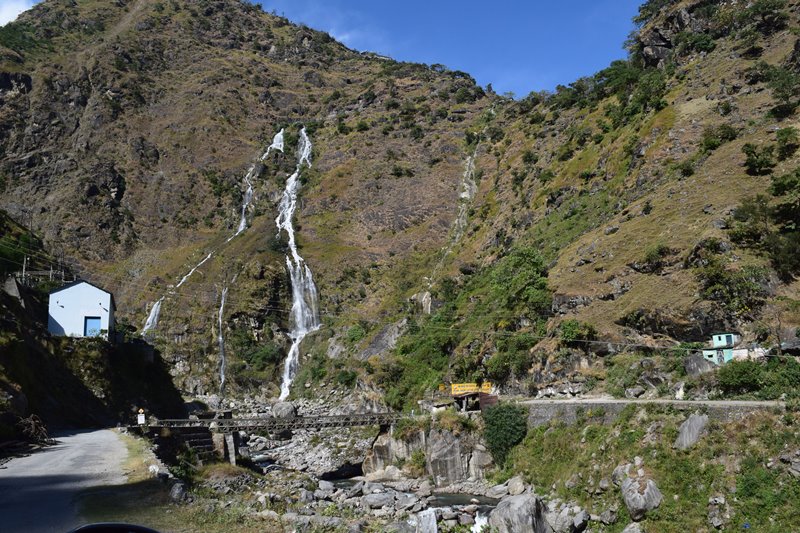 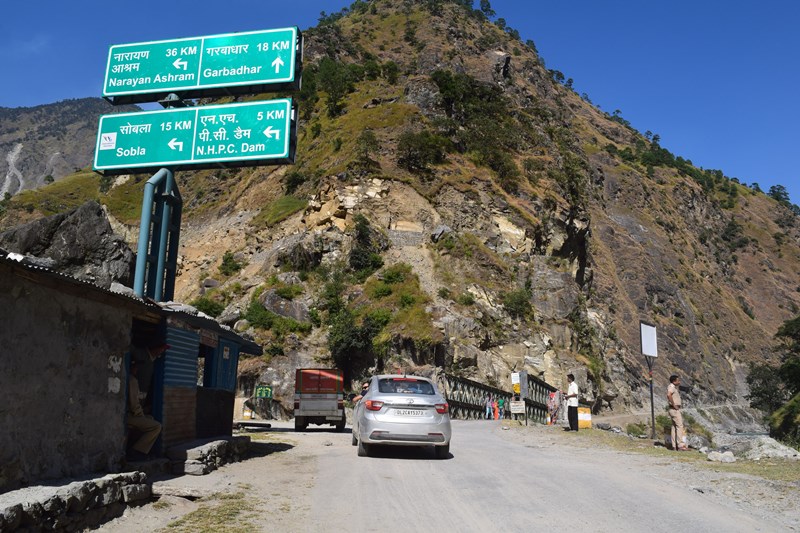 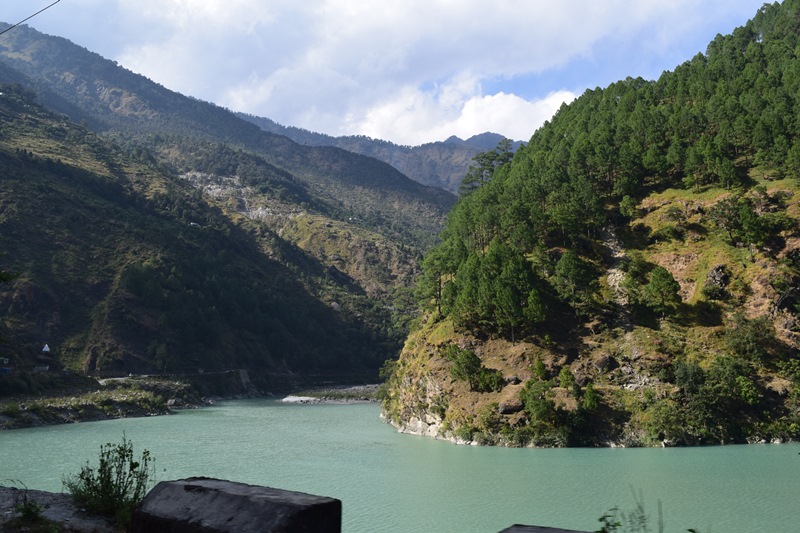 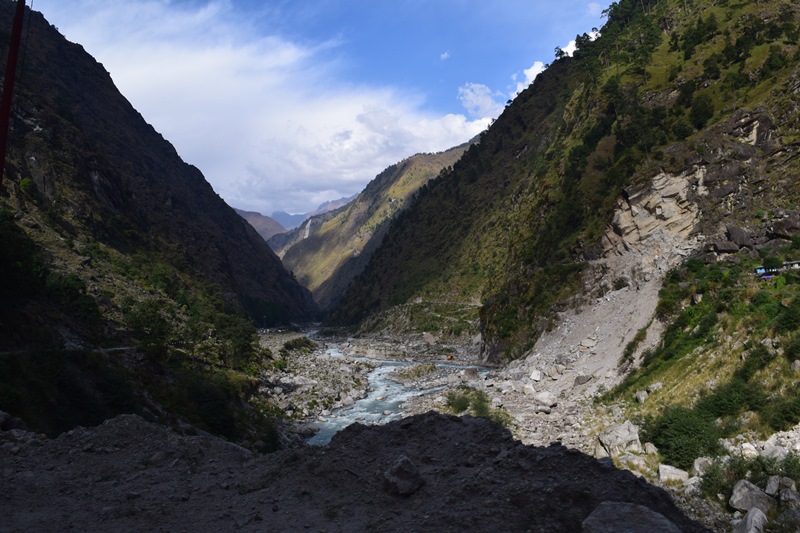 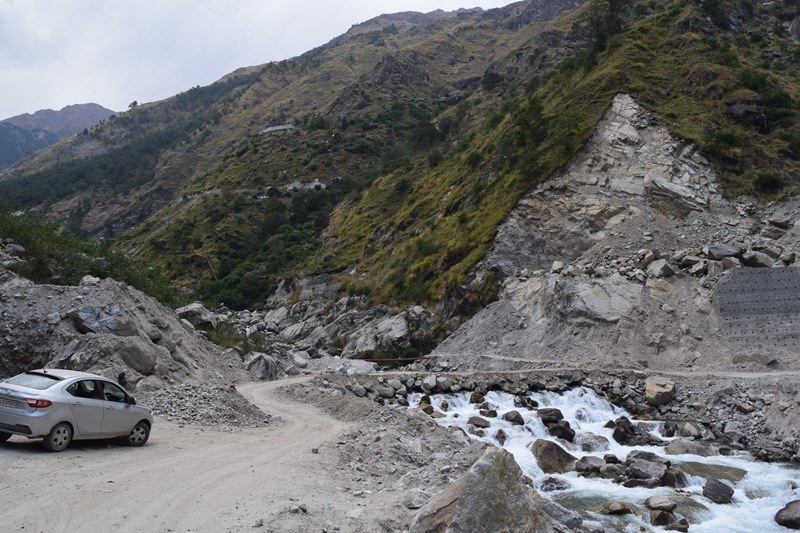 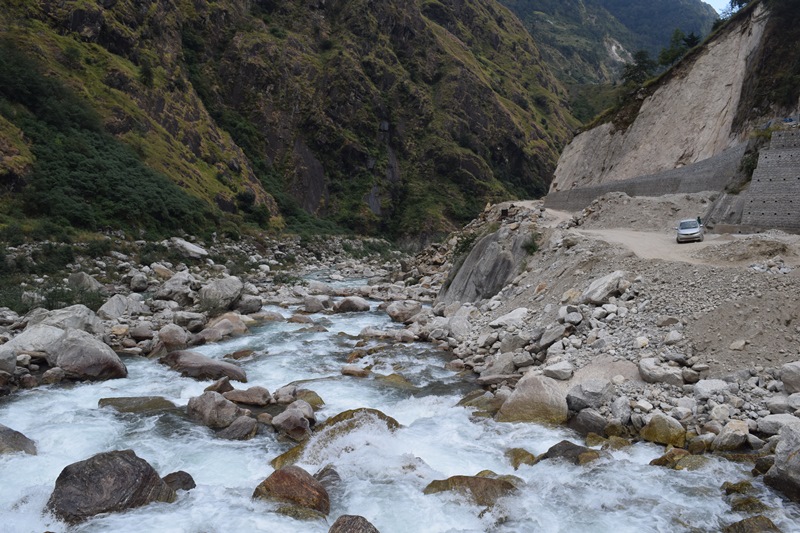 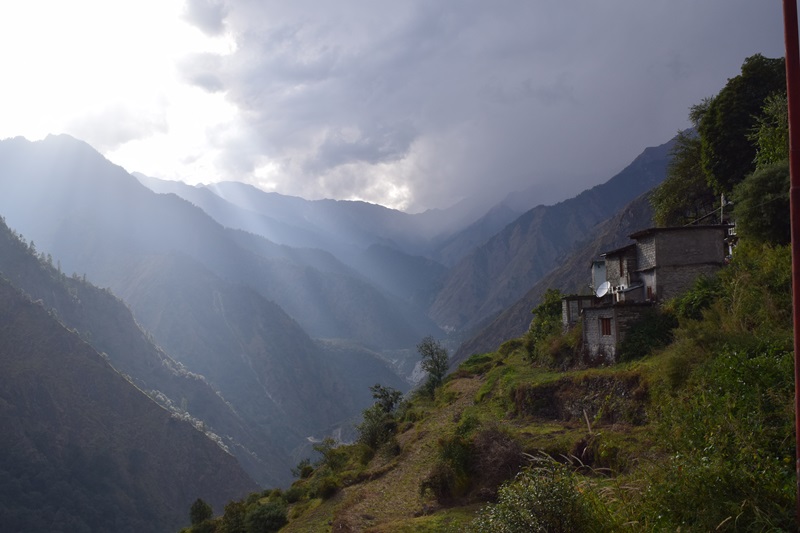 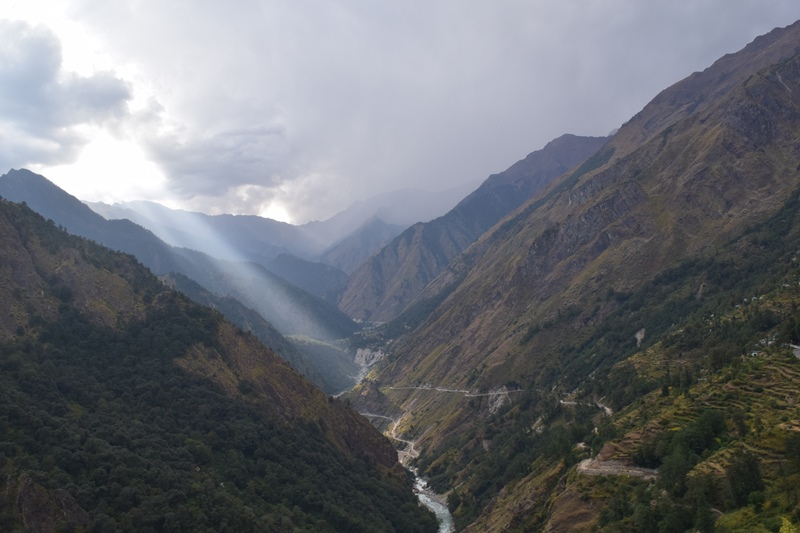 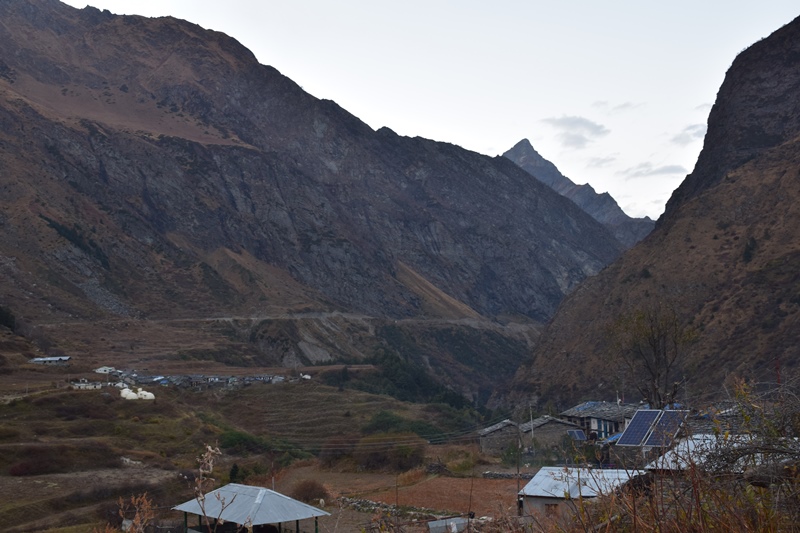 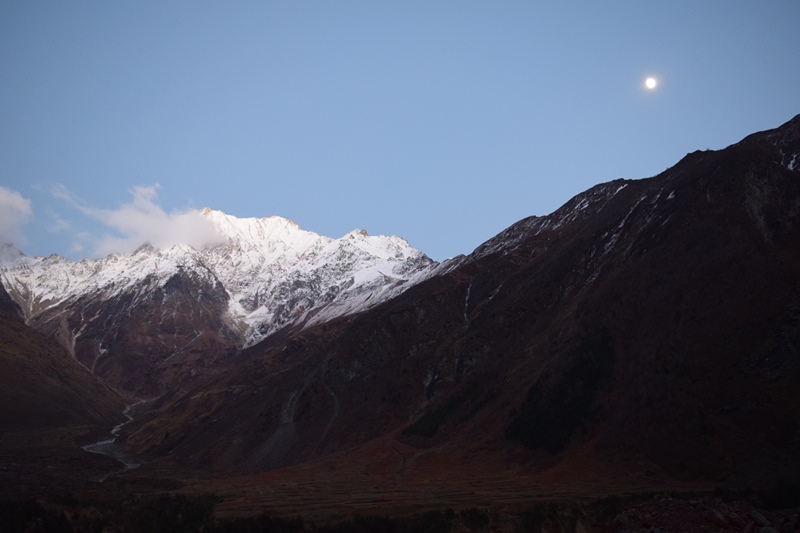 Wanted to go to Narayan Swami, but could not because of a slide just after Tawaghat. And there was no board at Tawaghat at that time so we missed it and continued straight towards Tibet border.