Today I wanted to reach Kullu by evening.
As per Google Maps it is around 350+ Kms from Tso Kar.
In mountain 350+ kms in a day is very difficult unless you start early.
I was ready to go at 5.48 AM.
But when I came out of my room to warm up my motorcycle.... It was full of snow frost. 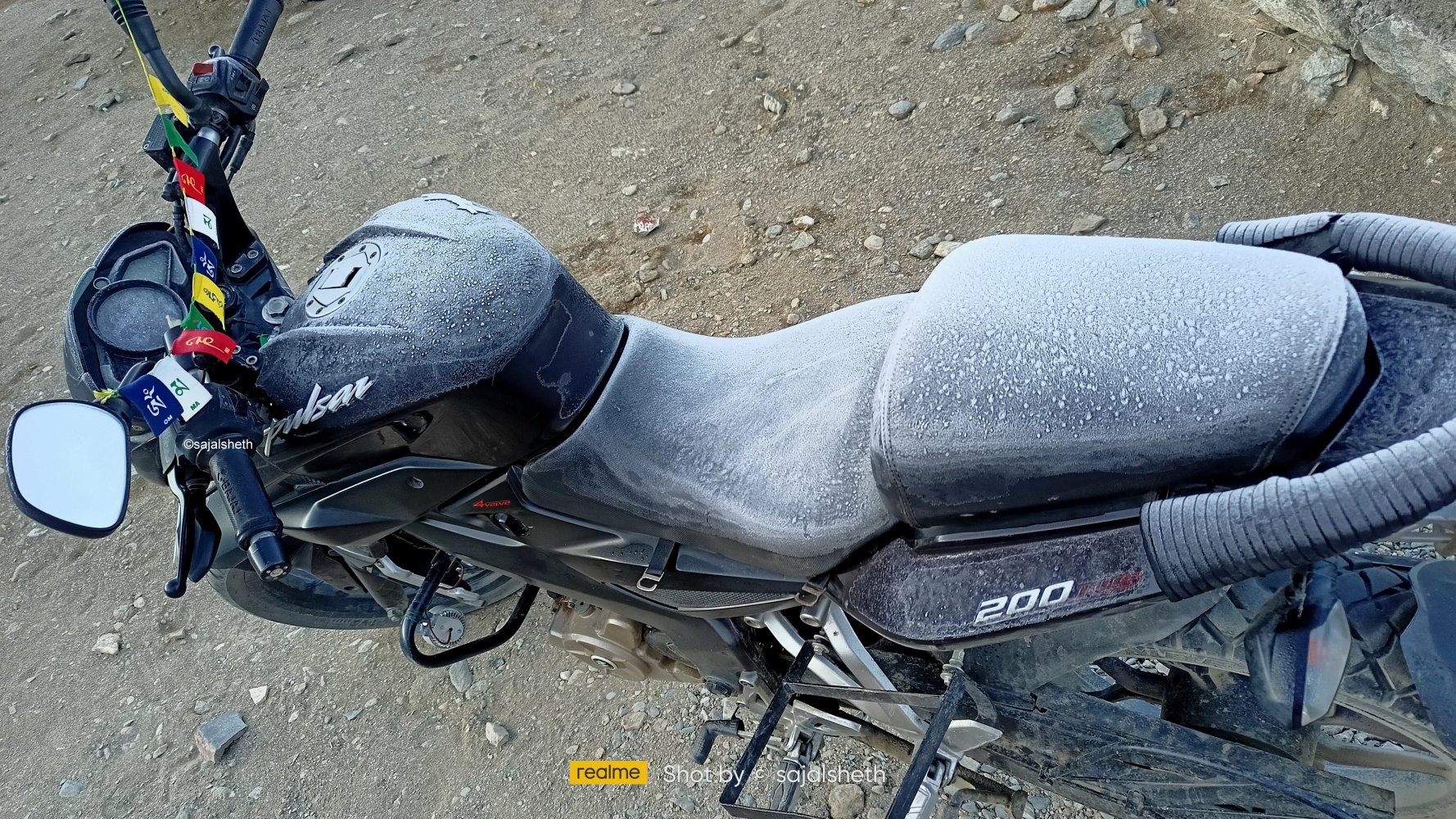 It was taking time to start. So I took water in a bucket and poured on entire motorcycle. Slowly snow frost started to go.
Then I tied luggage and started without having breakfast here at Tsokar Eco Resort. It was around 6.45 AM then. 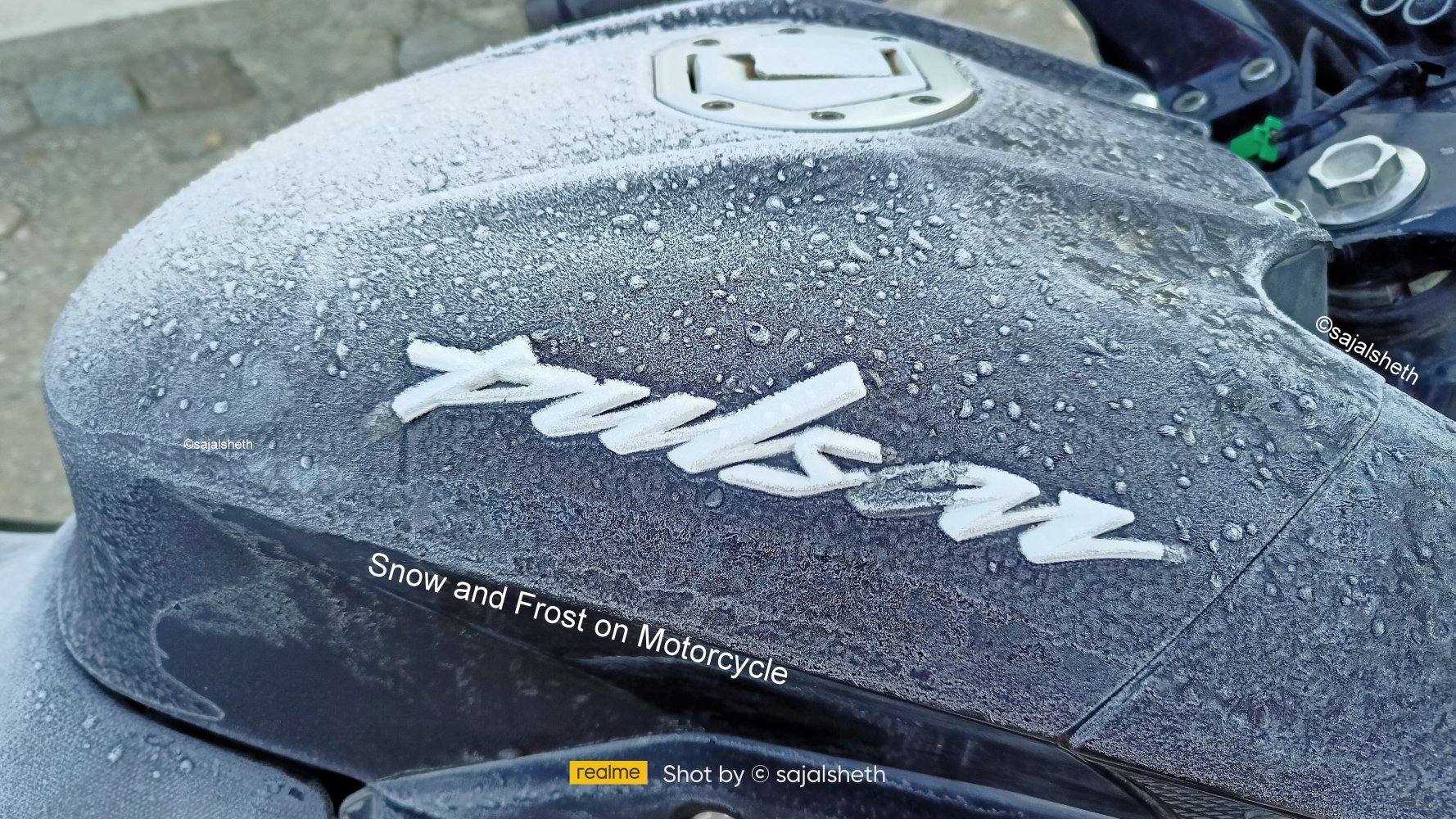 I reached Debring and had breakfast.
After Debring the road was very good. It was tar road. I could see normal traffic of trucks, cars & bikers.

Then crossed More plains.
And Crossed Pang.
I crossed Lachulung La Pass at 16,616 feet.
From Pang to Lachulung La Pass, there was heavy traffic of trucks. There were numerous trucks and were driving at a very high speed. And due to that lots of dust was coming in air.
Just After Lachulung La Pass there is a short cut downhill towards Whisky Nala. They went in that downhill shortcut.
Then I crossed Nakeela Pass at 15547 feet 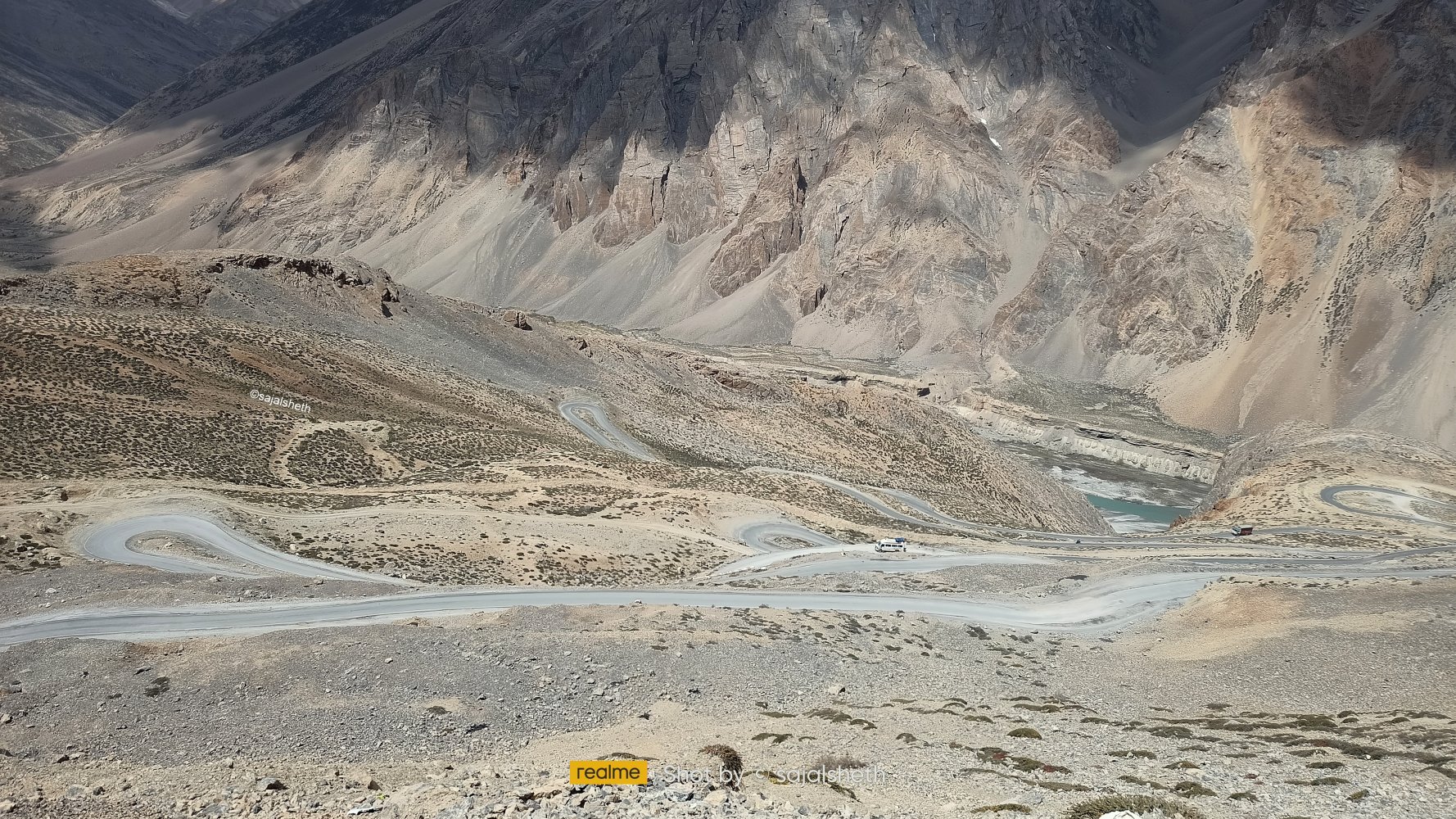 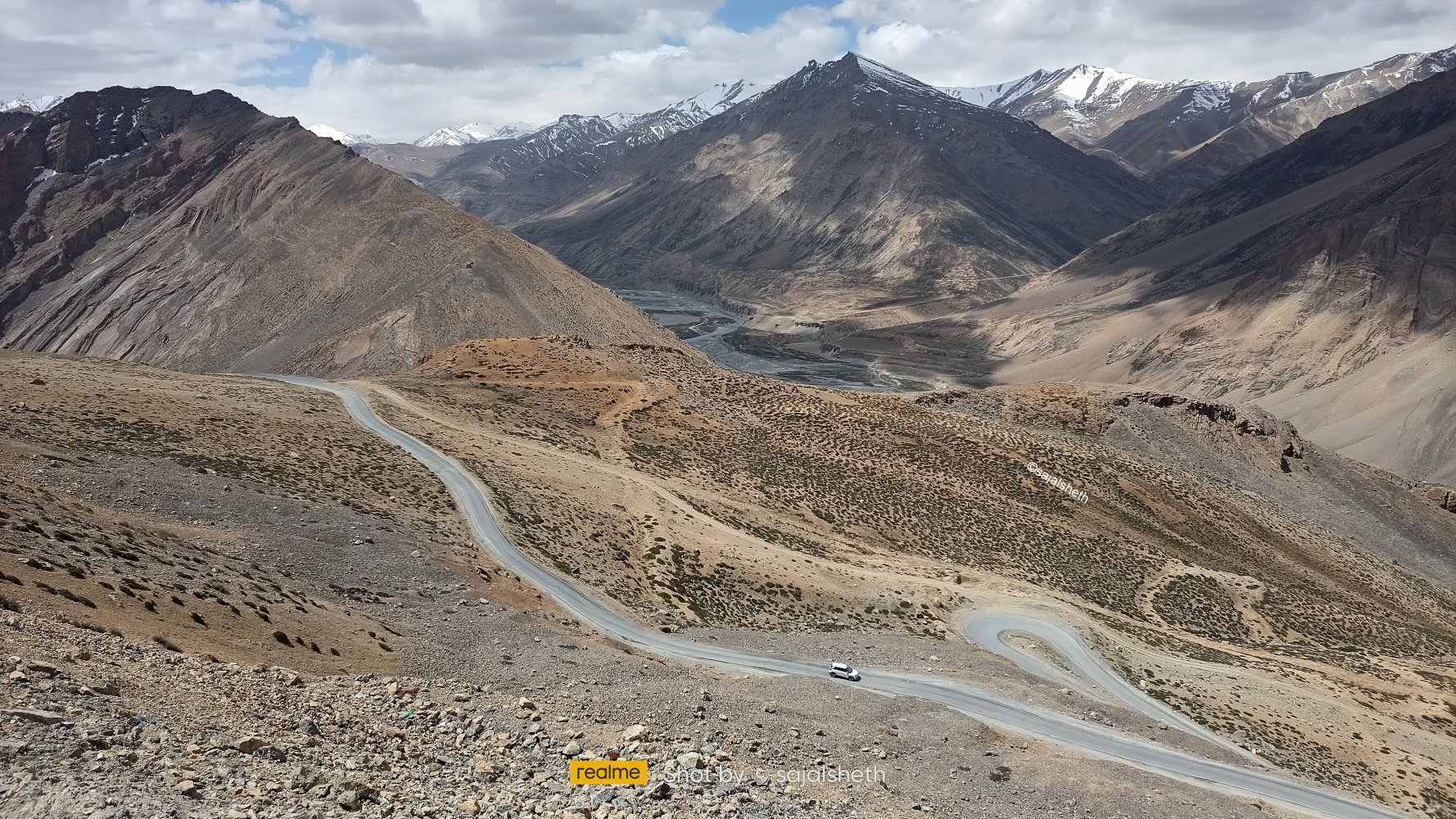 That river at bottom is Tsarap River. Same river goes via Phukhtal Monastery and becames Zanskar River at Padum.

Weather was very comfortable and I was riding in perfect speed. 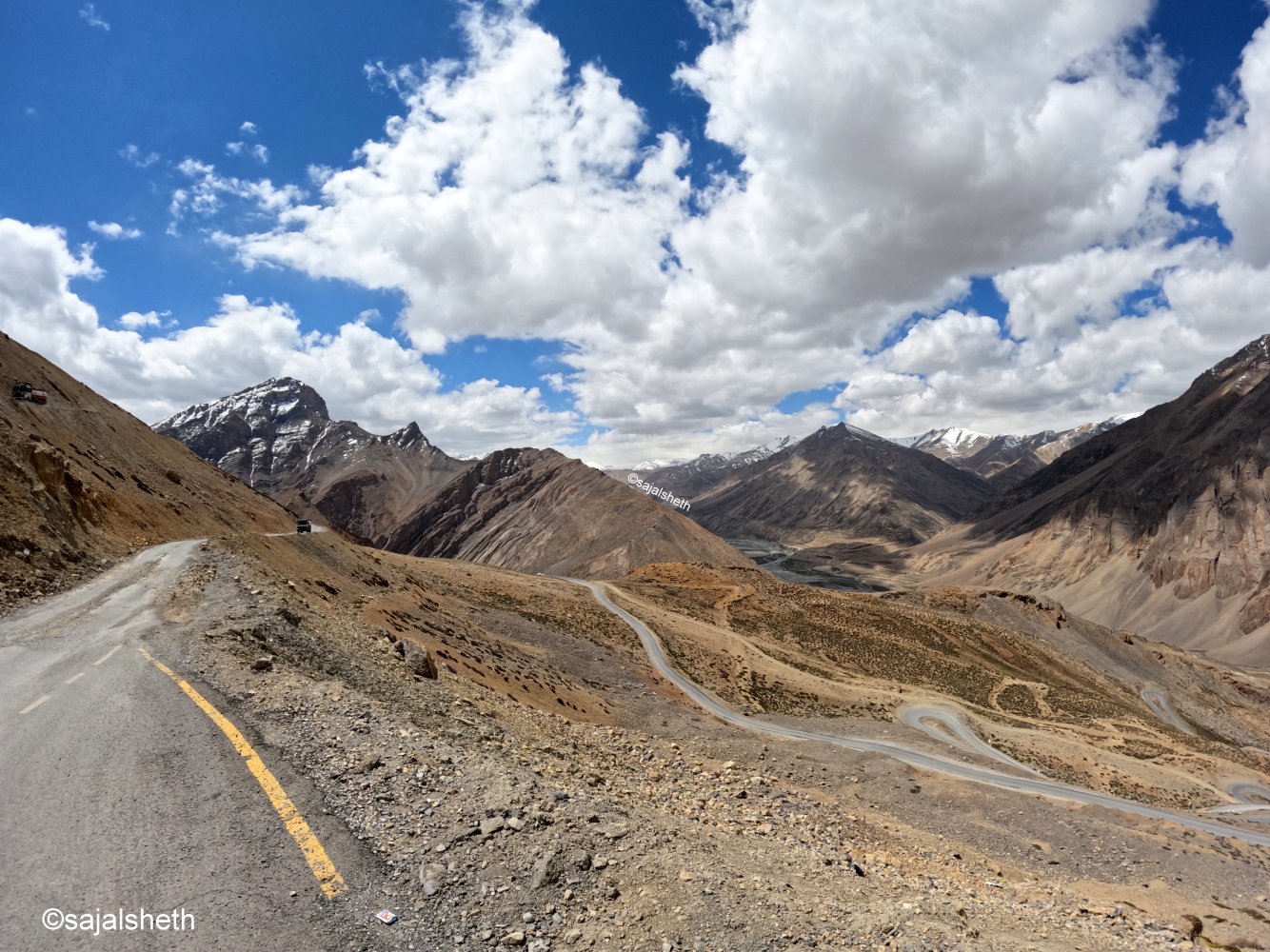 After Gata loop there was a water crossing and lots of vehicle were in queue there. But since I had two wheeler, I could ride from side and overtake those vehicles in queue.
Before Sarchu , a new concrete road is being made.

I was now inside Himachal Pradesh now.
Then I reached Sarchu and had maggie and some food. I did not had full lunch because half stomach is good for mountain rides.
My bike and dress were full of dust due to those trucks. I cleaned my bike and dress with cloth.
I also unloaded my balance 5 ltr petrol jar in my tank. Now I did not have any extra fuel to carry. 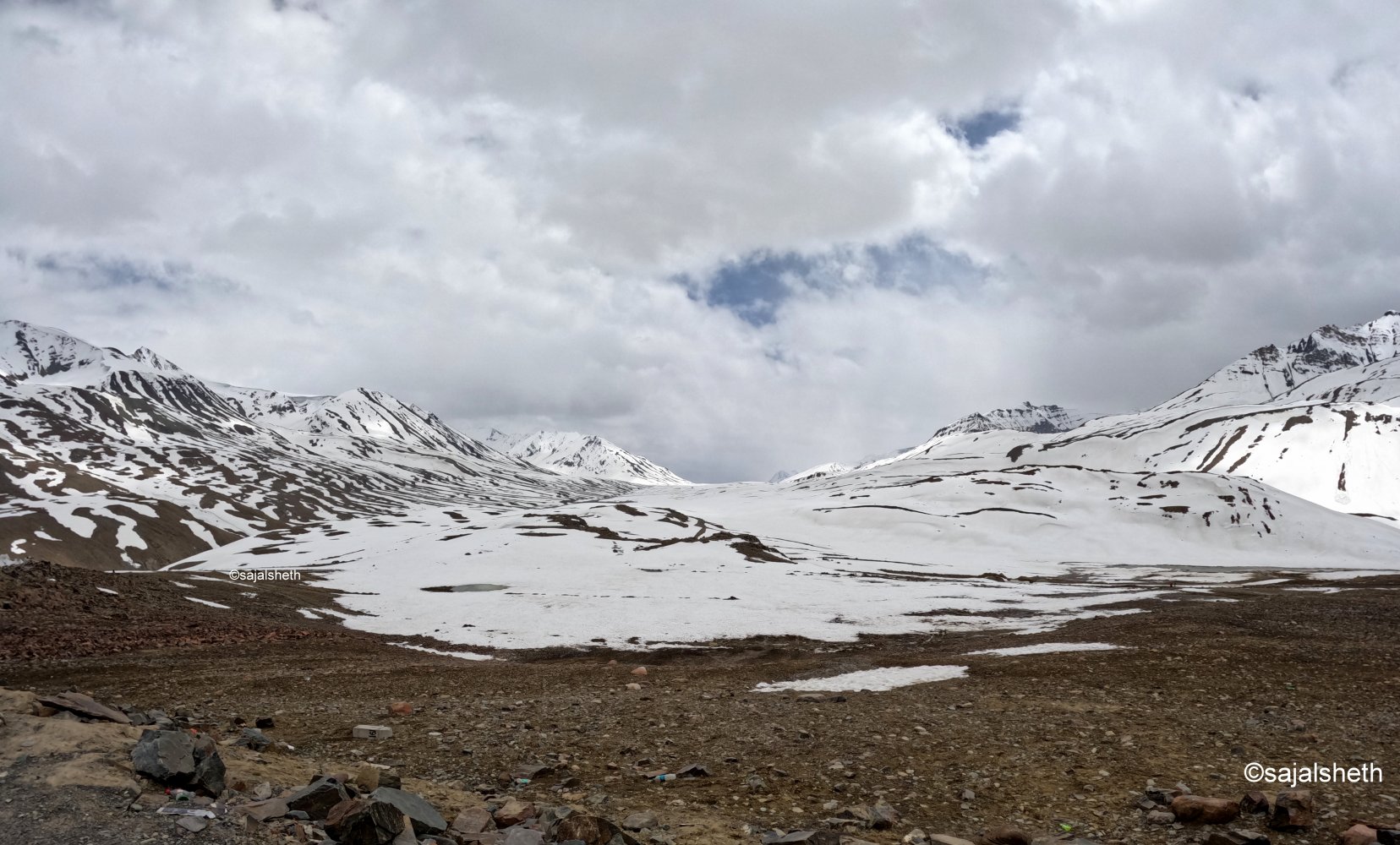 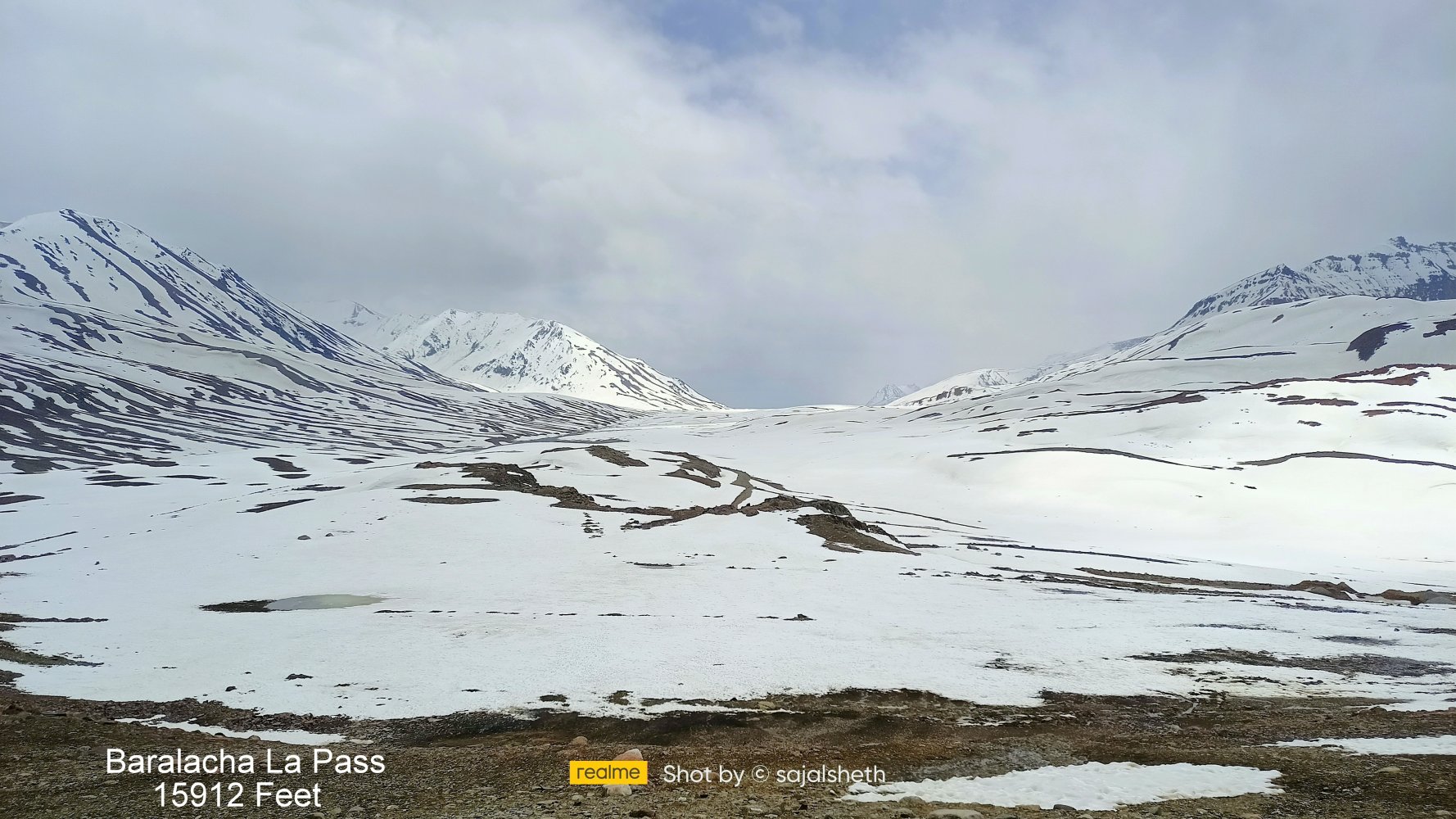 Many tourist vehicles were stopping on road to enjoy snow. 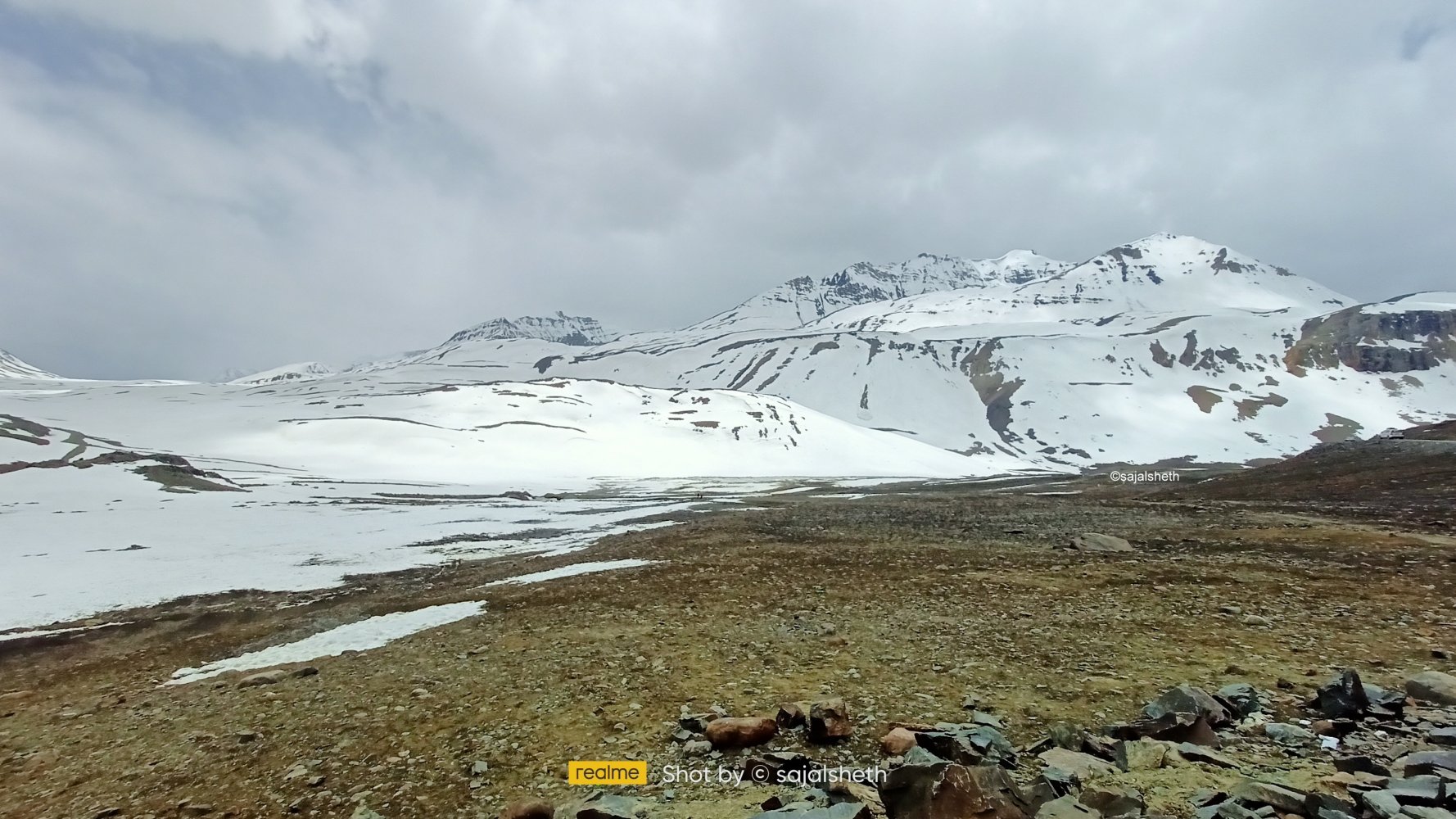 This is a very short video of BaralachaLa Pass.


A selfie with goPro 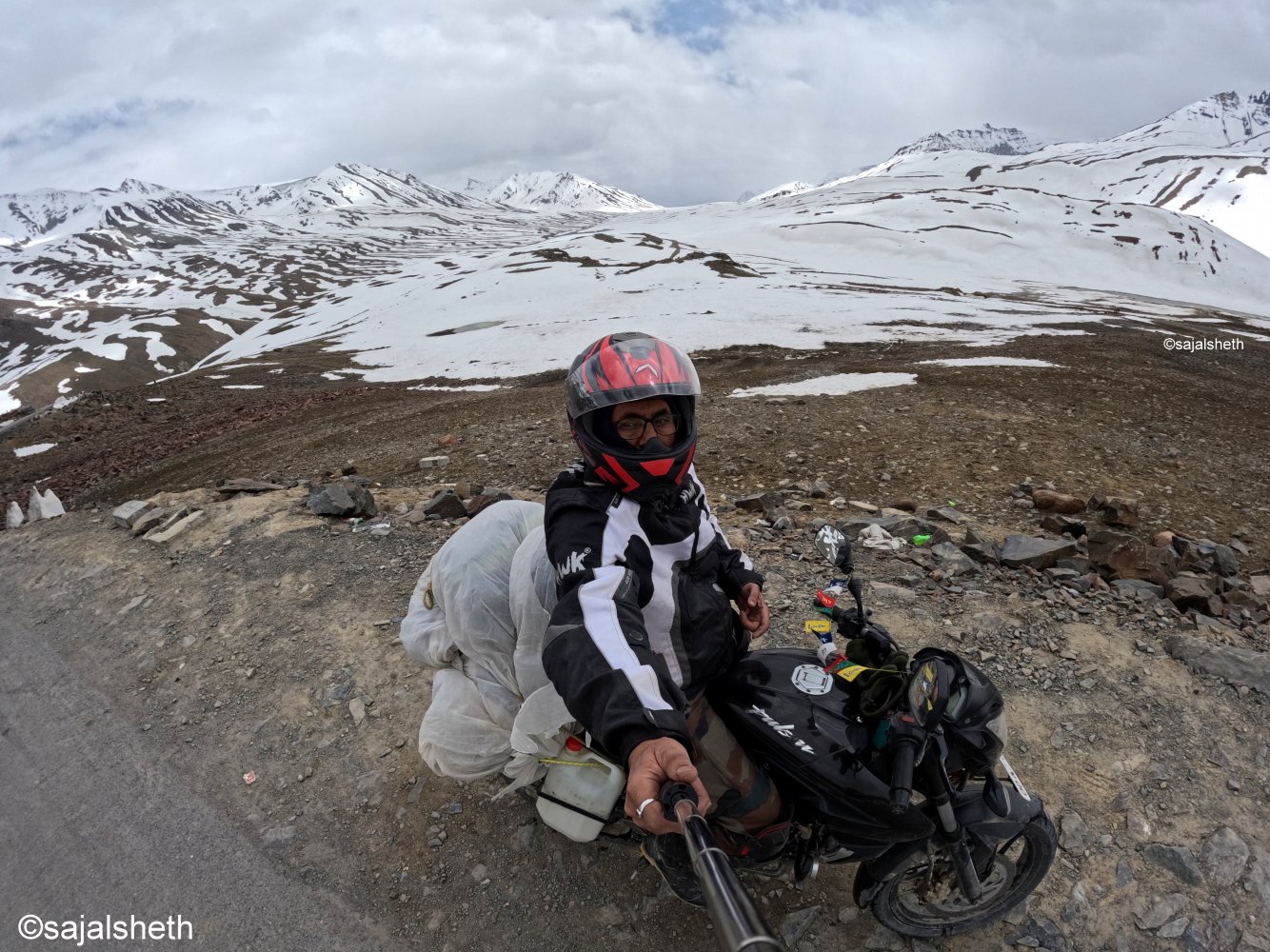 This is last time I will see such huge snow, during this ride. 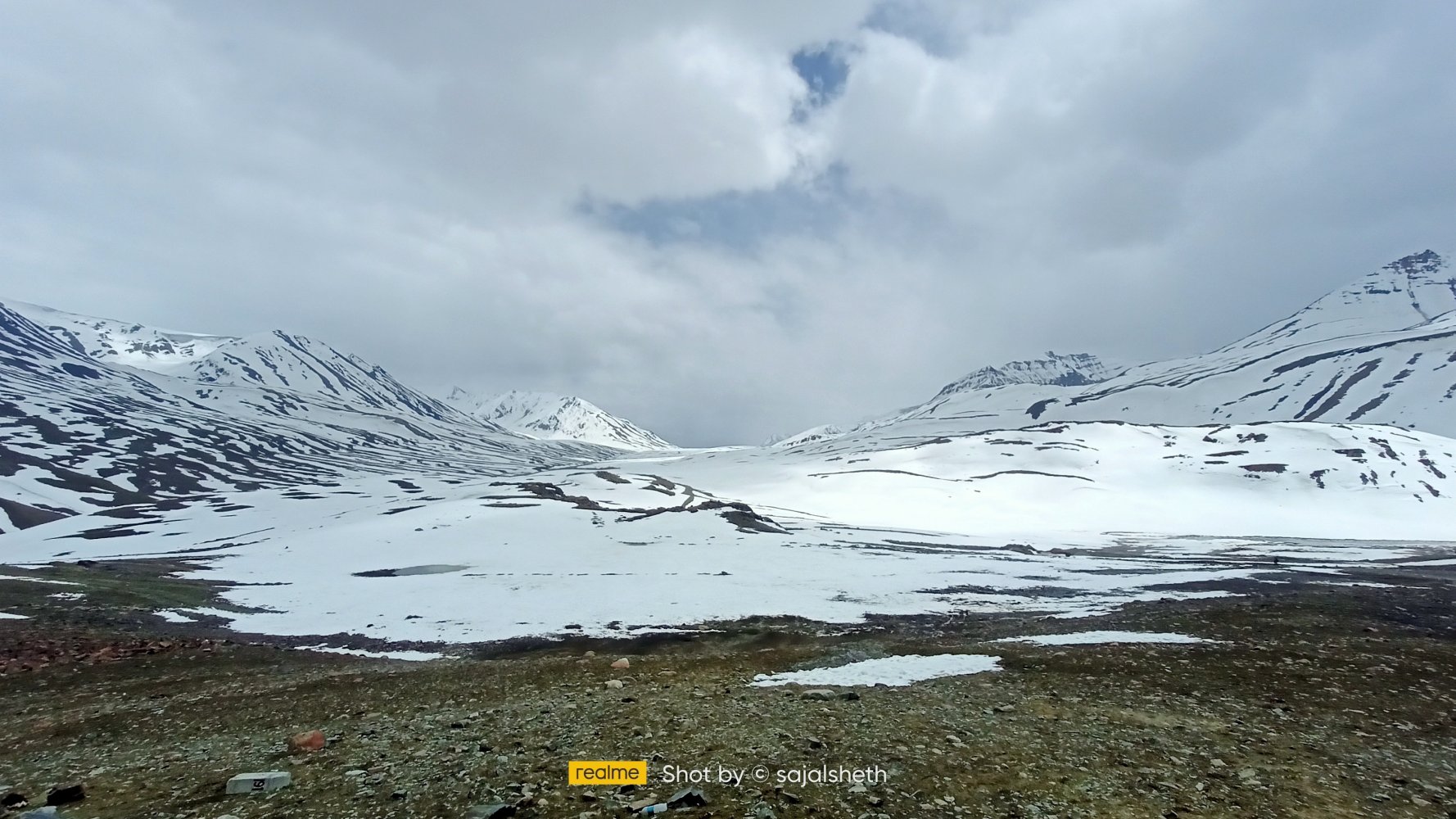 From here there were too many tourists. Many vehicles stopped for snow. 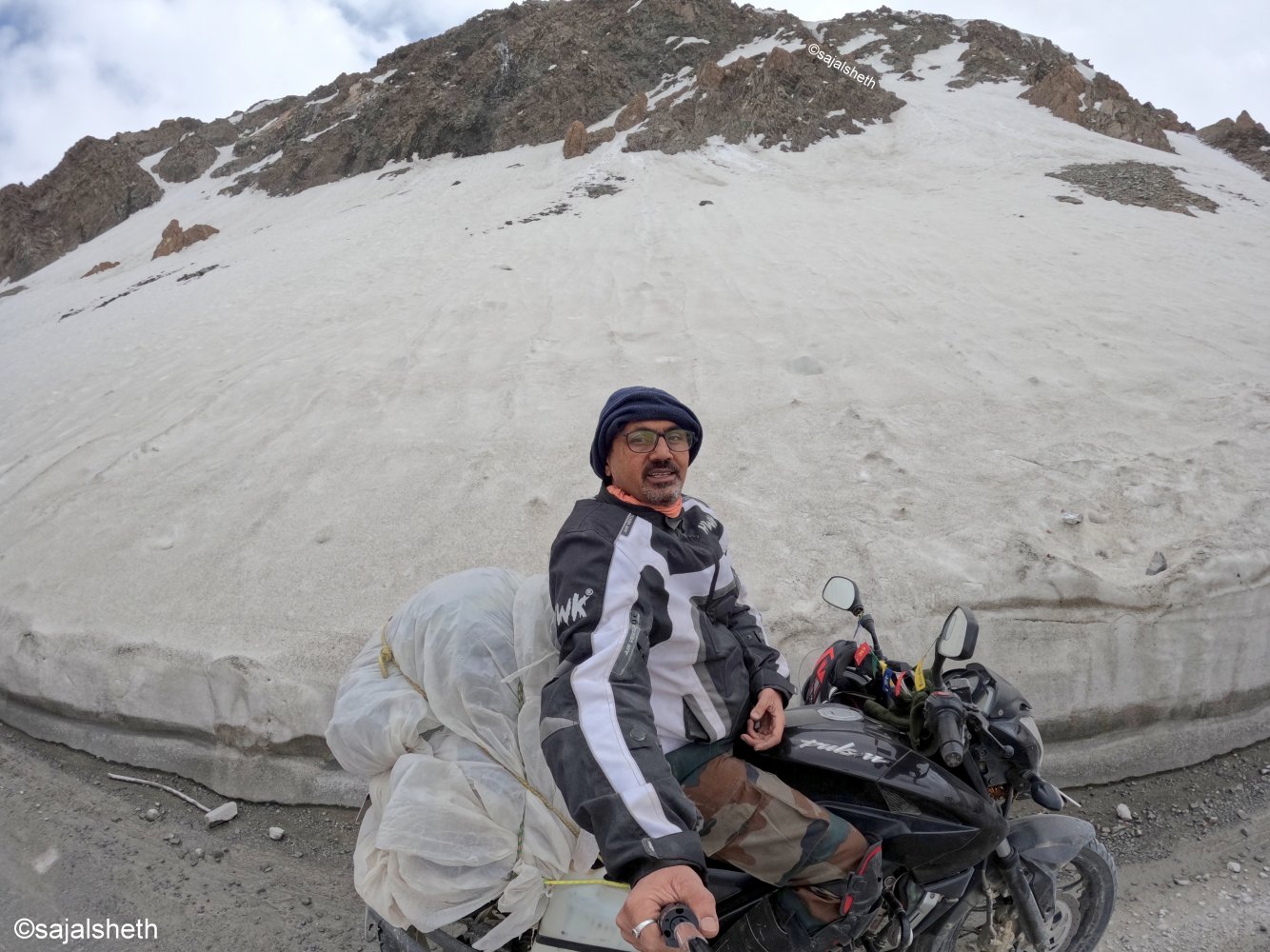 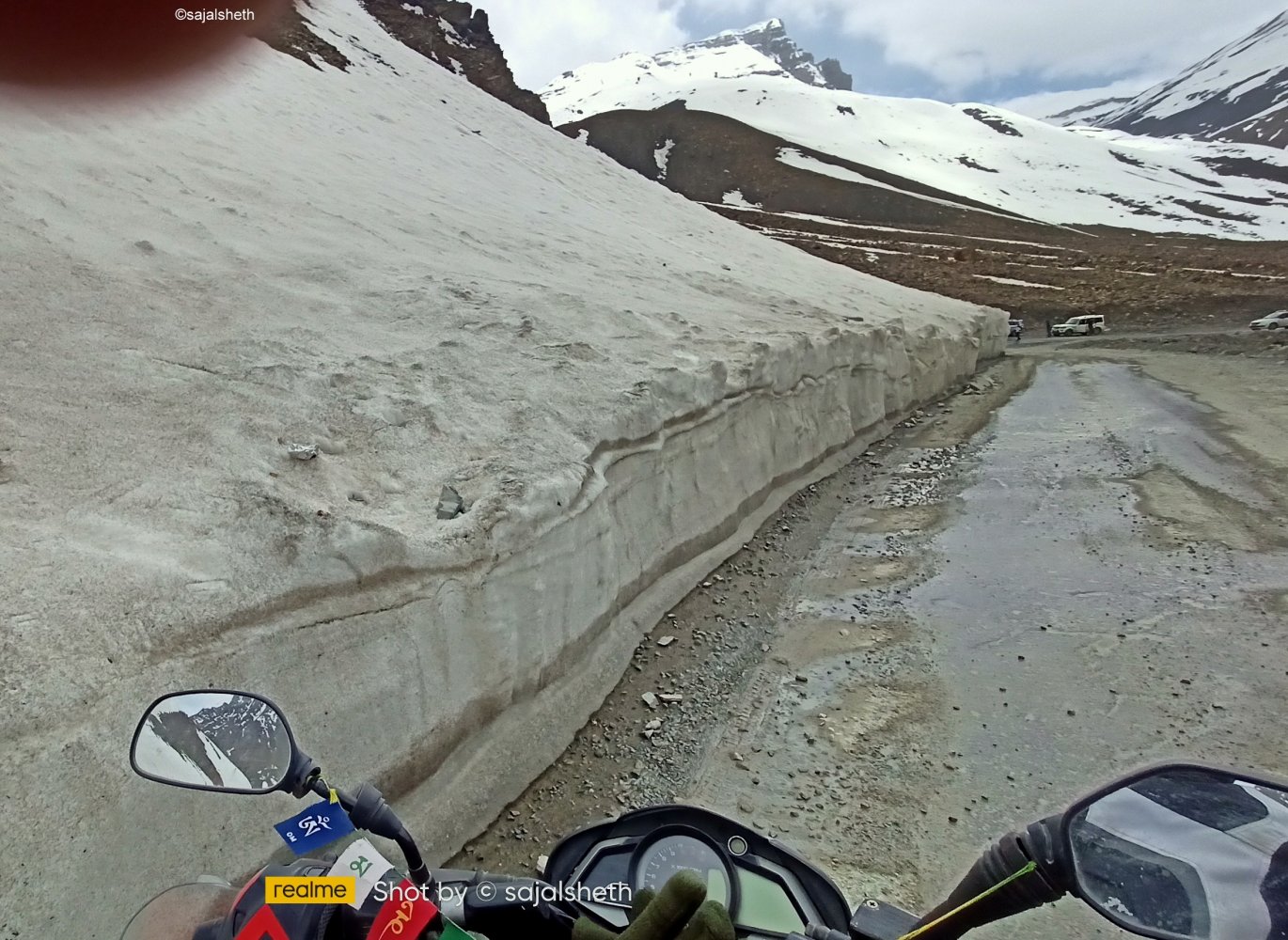 And last picture with snow for this ride. 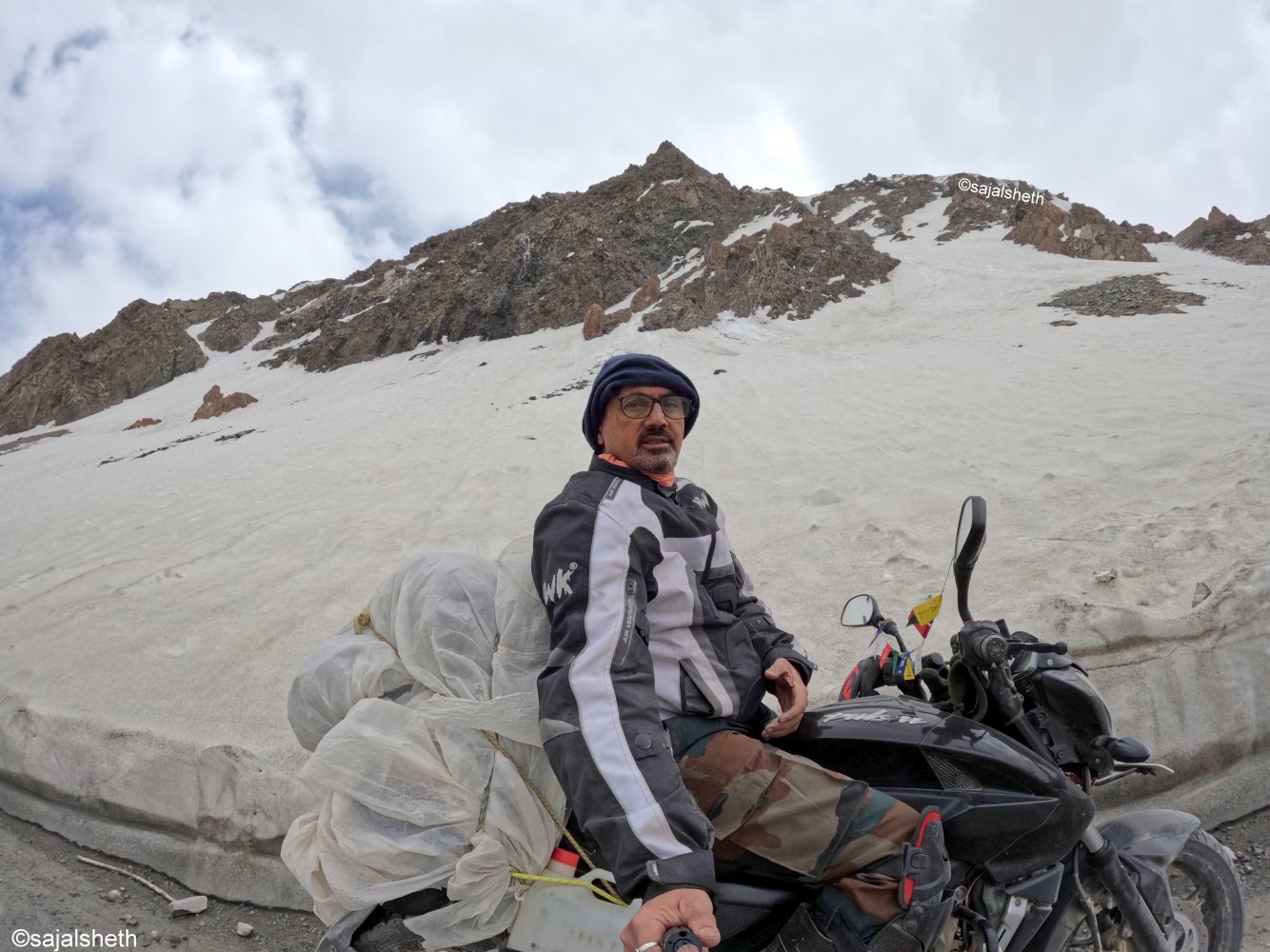 After that I reached Suraj Tal.
Same position here... too many tourists and vehicles.

I rode down further and crossed zing zing bar, then Deepak Tal.
Reached Darcha and at check post here my details were noted.

Today I completed the circle. I was here on 22.5.2022 and completed this 3 rd new route to Leh today.
Then cross Jispa and Keylong.
At Keylong petrol pump there were many bikers topping up their fuel.
I just filled up Rs.200 petrol to be on safe side.

Then crossed Tandi and Sissu.
now a days too many tourists come till Sissu via Atal Tunnel and enjoy the beauty of area.
I stopped at one place and called the homestay owner at Kullu and informed him to keep one room for me.

Then I crossed Atal Tunnel.
In the middle of Atal Tunnel , I saw a couple who were pushing the bike. Perhaps fuel was over or bike might not be starting.
I did not stop because, we are not allowed to stop inside this tunnel.
While coming out of tunnel, I informed police about that couple on motorcycle.

Police said he will send someone to rescue them.

I then crossed Manali before crossing a long queue of vehicles at Solang valley. It was a big jam at Solang.
But two wheeler have this advantage of overtaking and moving ahead.

Lastly I reached that homestay called Beas View homestay at Kullu. I had stayed here on 20.5.2022 also.
It was around 7pm then.
So it took around 12 hours to cover this 350 + kms in one day.
I started from Tso Kar and reached Kullu.
I was tired and happy too.

I had my dinner at Freedom Dhaba at Talogi area on Kullu High way.