There are many questions being asked often about Umlingla Pass - Umlingla Top.

Here are few answers we know about this pass.
Like other passes this is also in developing stage now.
Please share whatever you know about its progress.

On social media this pic is viral with many questions: 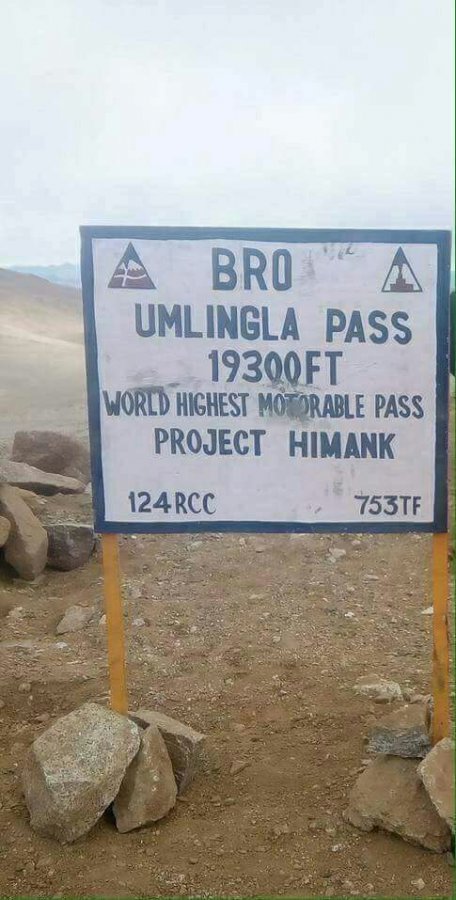 Edit on 13 September 2017 :
Finally puzzle is resolved.
You can now target for this pass.

This is pic from BRO : 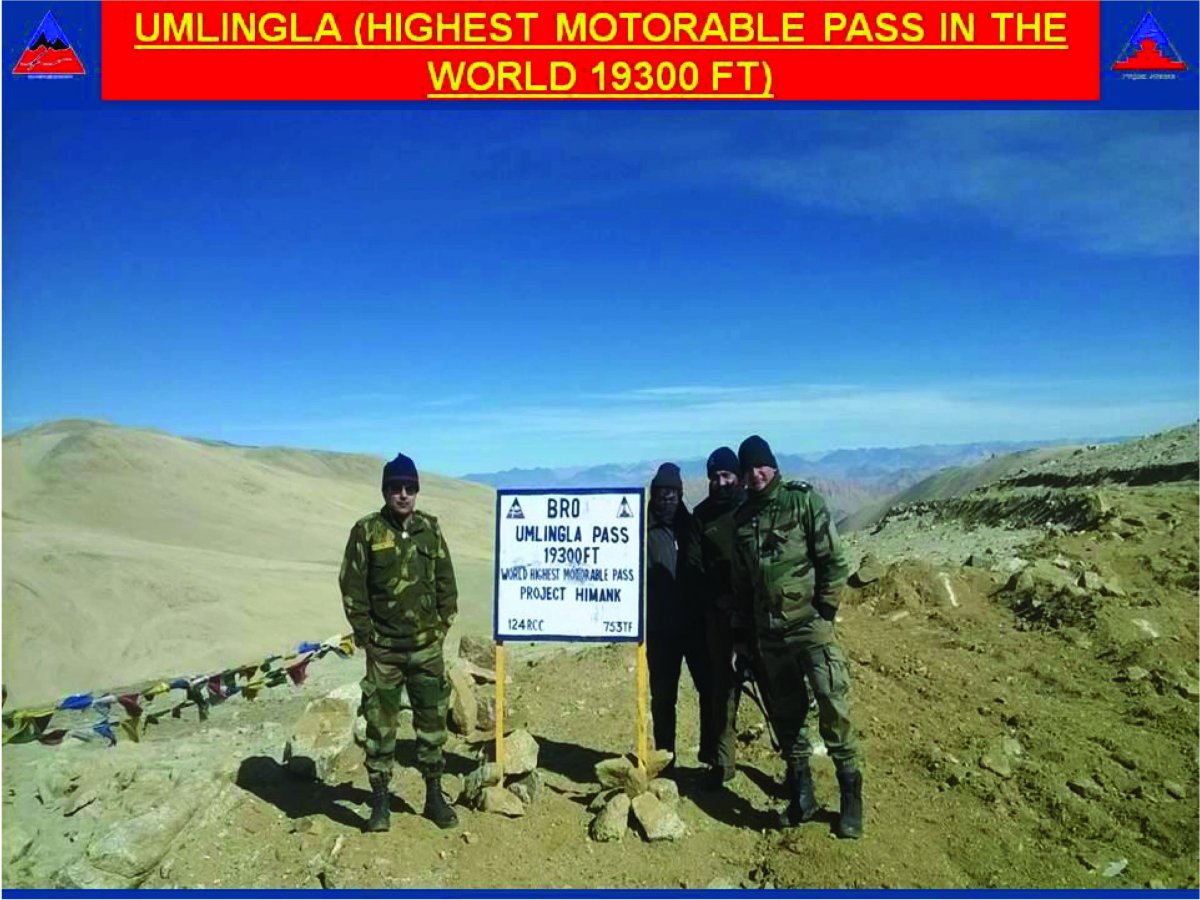 Connectivity across Umling La Pass.
Construction of road Chisumle – Demchock in Sourthern Ladakh to Cl-9 specification is under progress. Formation cutting of 5.181 Kms has been executed near Umling La Pass during FY 2016-17. Once completed, road C-D will be the highest motorable road in the world crossing Umling La Pass at 19300 Ft higher than Leh – Khardung La road with crosses Khardung La at 18380 Ft.

A mention of Umling Village is here :

Day 3 (26 July 2016): Today is a short day after a very long day yesterday. Today we will hike to Hankar village. Generally people hike to Thochuntse which is higher than Hankar. But due to lack of homestay in Thochuntse and also no confirmation of parachute tents, we have to stay in Hankar.

The trail today is very well defined and walking is almost always under the bright sun. We started at 8:30 AM. After 2 hours we crossed the Markha River and decided to take rest by the banks. Ahead there is a tributary to the river from the right side. The gorge is beautiful and marked by prayer flags. The left is main trail to Hankar while the right side leads to Rubring La

We reached the Umling Village at 11:30 AM. We had lunch and rested for an hour and then started from the village at 1:30 PM. Incidentally it was raining heavily during lunch. After the rain stopped, we started again, and reached Hankar at 2 PM. The village is beautiful. The trail is almost always under sun and commands nice views of Kangyaze (6400m). The overall trek was easy today and helped us acclimatise better for the long days ahead when we climb much higher.

Great, I mistook it for a spelling mistake for Muling La Pass. How to reach there, any route info Sir? I would like to apologize to the guy whom I gave wrong information on our whatsapp group.

This means they have started cutting the road. Any idea where Chisumle villlage is? As it is connected to Demchok it has no connection with Markha valley. Also will be very hard to get access for travellers,
My best guess based on pure imagination the pass is here:
The vertical red line is what China claims as their border, The horizontal like is I guess what the route will be . If Chismule is where I think it is. 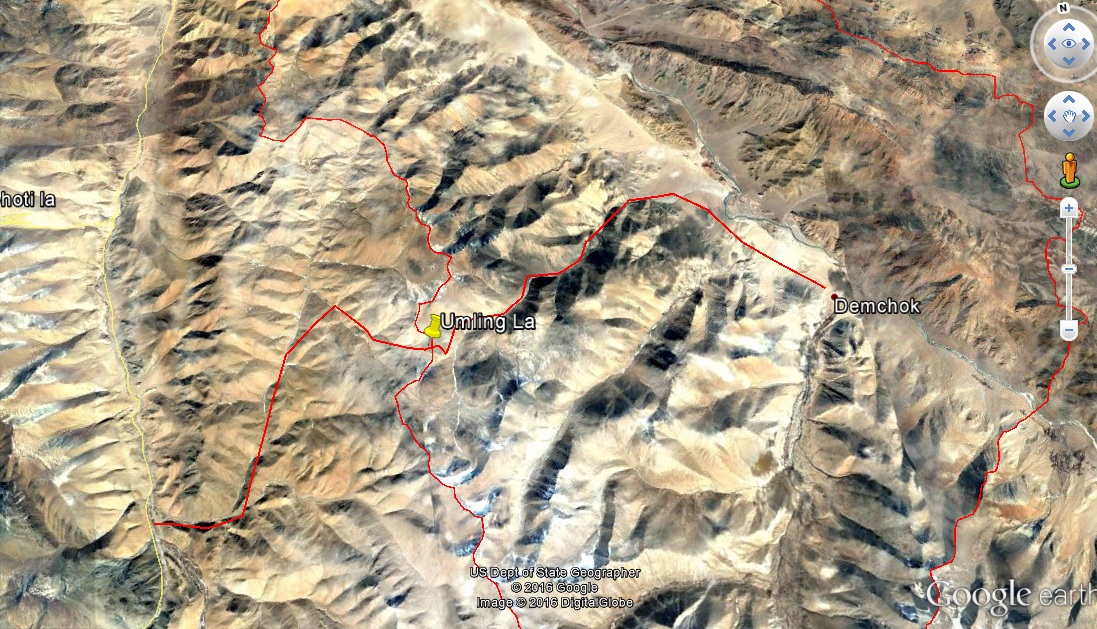 Now its our turn to say few favorite words of paji,

India activated a crucial air-base in Ladakh today barely 20 km from the Chinese border and, more significantly, got the go-ahead for construction of four strategic roads along the border that will radically improve its ability to promptly induct troops and reinforcements.

These had been planned under the integrated border development plan years ago but clearances from the Environment Ministry had been hanging fire for the past two years. The final approval came today from the three-member special environment bench headed by Chief Justice K G Balakrishnan, within 10 minutes of the hearing, as it accepted long-awaited recommendations of the court-appointed Central Empowered Committee (CEC).

These roads are crucial for the armed forces as they provide links to the border in the Pangong Tso lake area which is notorious for transgressions by Chinese troops as well as to the border post of Demchok on the Line of Actual Control.

What was holding up permissions was that all these roads pass through the Changthang cold desert wildlife sanctuary in Ladakh.

The roads are part of broader plan to improve connectivity along the border and had been identified as a priority area by the China Study Group. While pushing for an early clearance of approvals, the Defence Ministry said that the China study group had recommended "a high operational preparedness" in the region by laying down a communication network of roads to ensure mobilization of troops and resources to the affected areas.

The Home Ministry also apprised the CEC that construction "is absolutely necessary for meeting the operational requirement of Army, particularly for the movement of troops and heavy artillery in the time of war."

According to the CEC report, the Koyal-Chisumle-Zarsar and the Karzok-Chumar Road are proposed to be built by ITBP at the cost of Rs 237 crore and Rs 152 crore respectively.

It is at border of China.