Video Of Traffic Jam In Pakistan Peddled As Khandala BOOM found that the video is an aerial view of the road leading to Naran-Kaghan Valley in Pakistan, which was choked due to the Eid-Al-Adha rush 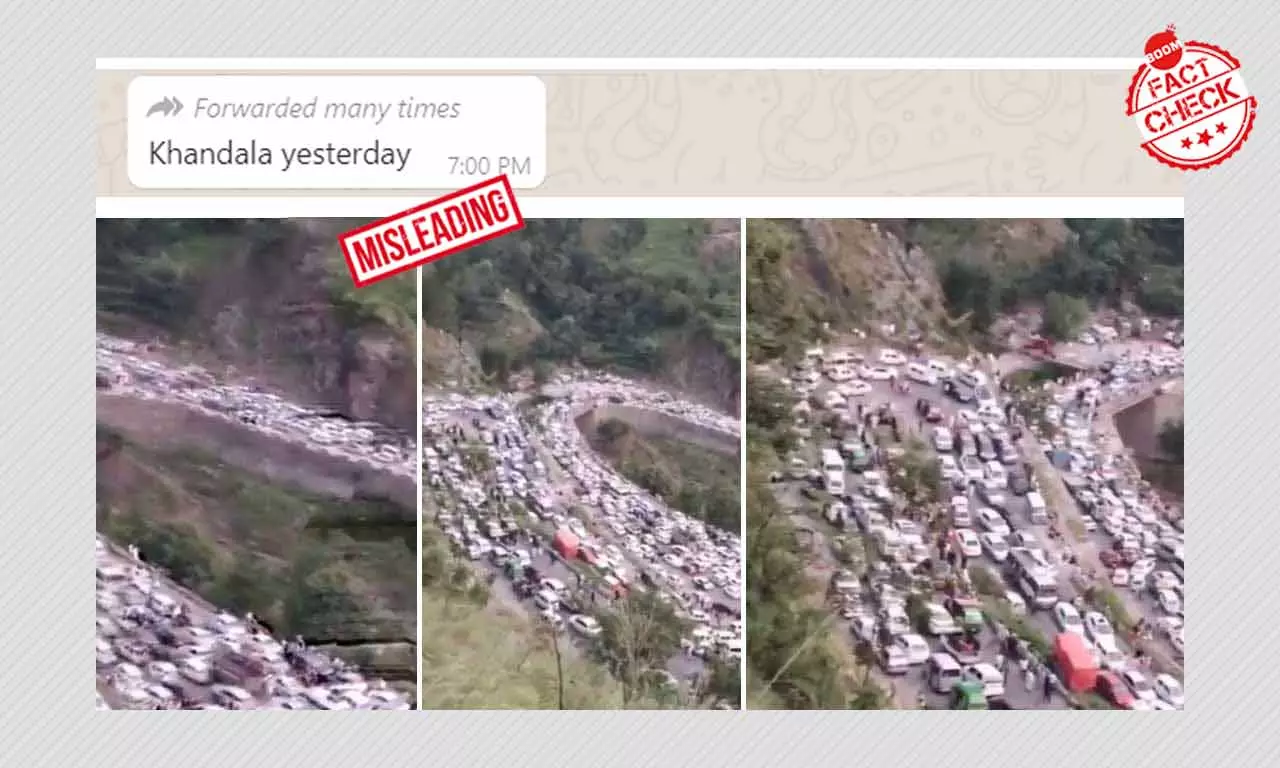 Claim
A video of a heavy traffic jam in the Naran and Kaghan Valley of Pakistan has surfaced on WhatsApp and Facebook with false claims that it shows visuals of Khandala - a hill station in Maharashtra - over the weekend (July 24-July 25).
The same video is doing the rounds as Himachal Pradesh's Kinnaur on social media where a rockslide led to the death of nine tourists and injured others.

Fact
BOOM ran a reverse image search with key frames of the video and found several news reports which stated that the visuals show roads of the Naran and Kaghan Valley in Pakistan. According to an ARY News bulleting uploaded on YouTube on July 26, the viral clip was shot to document the heavy traffic jam in the Kaghan valley during the first four days of the festival of Eidul Azha. Additionally, BOOM was able to locate the place with the help of Google maps. The place is located at Mansehra-Naran

Did Switzerland Really Approve The Use Of 3-D Printed Suicide Pods?
Last week, reports of Switzerland's medical board approving the use of the controversial 'Sarco Suicide Pods' went viral. Here's what really happened. 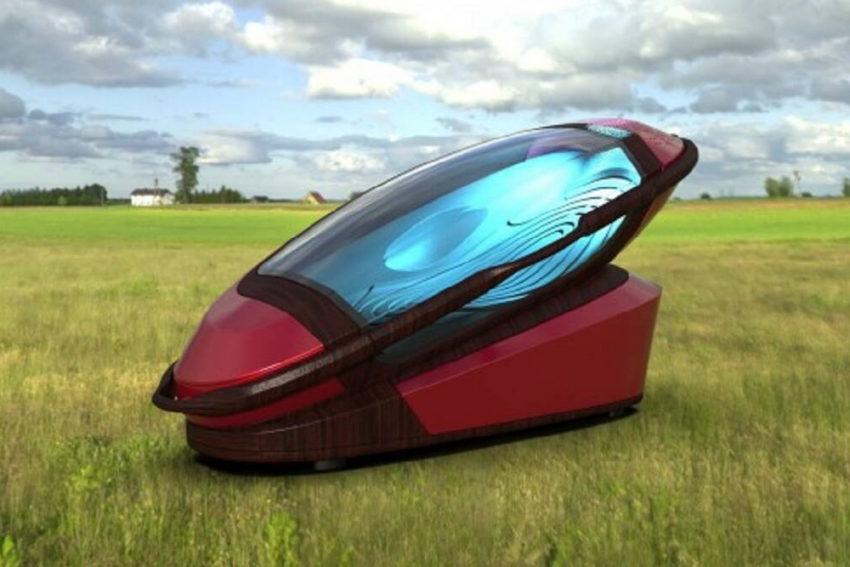 Last week, news about a controversial 'suicide pod' being approved by the medical board in Switzerland went viral. According to reports, Switzerland had given approval to 3-D printed suicide capsules that could be used by those wanting to end their lives. As it turns out, no such suicide pod has been approved by any agencies in Switzerland.
According to reports carried by several media organisations, Switzerland's medical board had approved the use of 3-D printed suicide capsules known as 'Sarco Suicide Pods' that can be legally used for assisted suicide.

What is the Sarco Suicide Pod?

The Sarco Suicide Pod has been created by a non-profit organisation called Exit International which advocates voluntary euthanasia and assisted suicide. The 3D-printed pod, when activated by the user, becomes flooded with nitrogen until it fatally reduces the oxygen levels inside.
The pod can reportedly be operated by the user from inside the pod. According to reports, in order to avail the facility, candidates would first have to take a survey and confirm that the decision to take their lives was their own. The Daily Mail reported that the person would then be required to answer certain pre-determined questions and press some buttons to start the process. News of the pod becoming legal in Switzerland went viral across media platforms.

Assisted suicide is permitted in Switzerland under certain conditions. However, the Sarco Suicide Pods have not been approved for use in the country. SwissMedic, the government agency in charge of regulating medical products in the country, confirmed to Associated Press that it had not approved the Sarco capsule.
The pod's creator Nitschke also confirmed that no such approval for a suicide pod had been sought for the SARCO Pod. A legal consultation carried out by Exit Internationa with a third party determined that the Sarco Pod did not need formal authorization or license to be used. According to reports, Nitschke has claimed to be in talks with several organisations in Switzerland to launch the pods.
There are currently two prototypes of the product, which are not being offered for sale or use. It has not yet been tested, though Nitschke has said a third prototype could be operational in early 2022.

Then why did everyone think Switzerland approved the Sarco Pods?
The confusion seems to have its genesis in a misleading headline published by a Swiss media platform last week. Switzerland's SwissInfo, a division of the Swiss Broadcasting Corporation, published an interview with Nitschke with the headline "Sarco suicide capsule ‘passes legal review’ in Switzerland.” On Wednesday, the headline for the same story was changed to: “Sarco suicide capsule hopes to enter Switzerland,”. The news platform also shared a note by the editor explaining the change and other edits.
Another Swiss news organisation Watson.ch also ran fact-checks on the claims of Swiff authorities approving the use of Sarco pods and found them to be untrue.
But by the time the corrections came, it was already too late. Several media and news organisations had already picked up the headlines and spun out stories. The news was widely shared on social media platforms as well.

Will Sarco Pods be used in Switzerland?
According to reports, scepticism continues to exist around the Sarco Pods even among the pro-assisted suicide community in Switzerland. EXIT, another non-profit organisation that has been in the forefront of offering assisted suicide facilities to people in Switzerland has observed reservations against the pod.
“EXIT does not see ‘Sarco’ as an alternative to the physician-assisted suicides that EXIT carries out in Switzerland,” EXIT was quoted by Snopes.com as saying. The group's representatives have also raised concerns about the legalisation process of the pod. “It is unclear what the exact content of the legal opinion for legalization is,” EXIT Vice President Jürg Wiler was quoted by AP.
What are the rules for assisted suicide in Switzerland?
Assisted suicide is legal in Switzerland under certain conditions. While active euthanasia not allowed, assisted suicide is legal when means of suicide are being offered by another person to the one seeking death without any selfish motive. The person seeking suicide must also be in a condition to make decisions. Active euthanasia by injecting lethal medicines is not permitted. However, providing means of suicide to a person seeking it may be permitted.
Assisted suicide is mostly carried out with assistance from a physician and is called 'PAS' (Physician-Assisted Suicide). The Sarco Pod, however, if approved, will reduce the role of the physician even further by introducing AI.

(With inputs from AP)


Did Switzerland Really Approve The Use Of Suicide Pods?

Screen Jungle
23 subscribers
20,000 Bikers in Germany to fulfill last wish of 6 year old boy, who was suffering from cancer

FINDINGS about the Video :

Original Video seems to be from Brazil and Cancer Patient incident happened at Germany.

VIDEOKINGS -- On Saturday over a MILLION bikers joined the Motor Parade in Sao Paulo lead by Brazil's President Jair Bolsonaro. The parade was held in protest against state governors and mayors in the country who imposed lockdowns to control the spread of the Corona virus.

His family posted online asking if anyone could ride their motorbike past their home, to cheer him up. They thought 20 or 30 people would come. 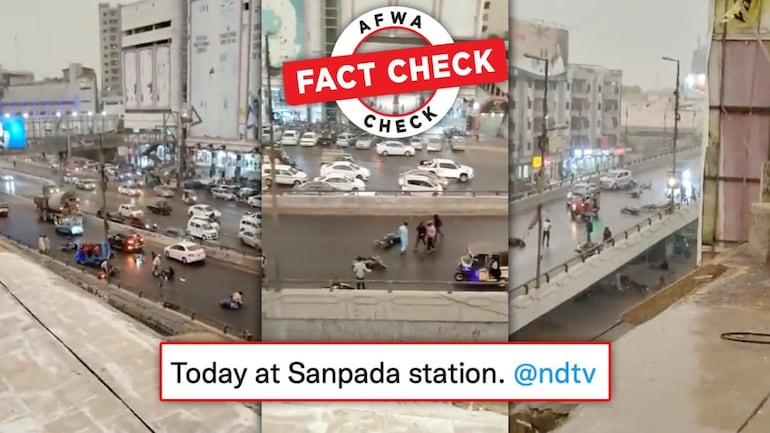 A viral video on social media claims to show bikers on a slippery road in Navi Mumbai.


Mumbai monsoons are often romanticized. However, the city hasn't had much rain this year. Meanwhile, a video of a few motorcycles slipping on a flyover has gone viral on social media. People sharing this video have claimed this shocking visual to be from Sanpada of Navi Mumbai.


Some users shared this video with a caption that read, "Oh my God!!! What did just happen!!! This video is of Navi Mumbai Sanpada area..." 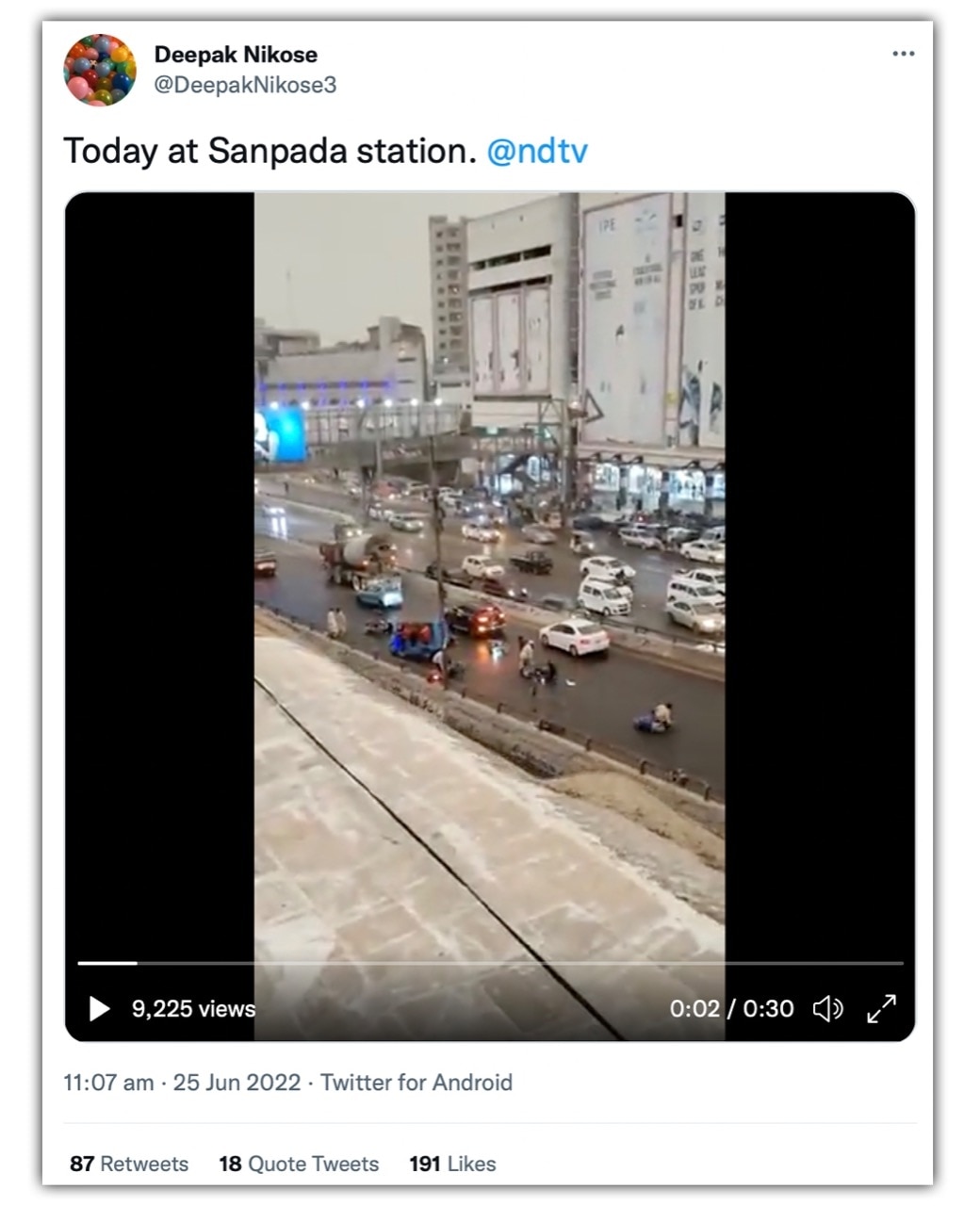 Archived versions of these posts can be seen here and here.
India Today Anti Fake News War Room (AFWA) has found this claim to be false as the video was not shot in Navi Mumbai. It is from Karachi, Pakistan.

AFWA Probe
While going through the comment section of one of the viral videos, we noticed people have claimed this incident to be from Karachi.

A showroom of 'Honda' was visible 5 seconds into the video. So, we searched on Google Maps for Honda showrooms in Karachi and found a similar-looking one near the Rashid Minhas Road in the city. 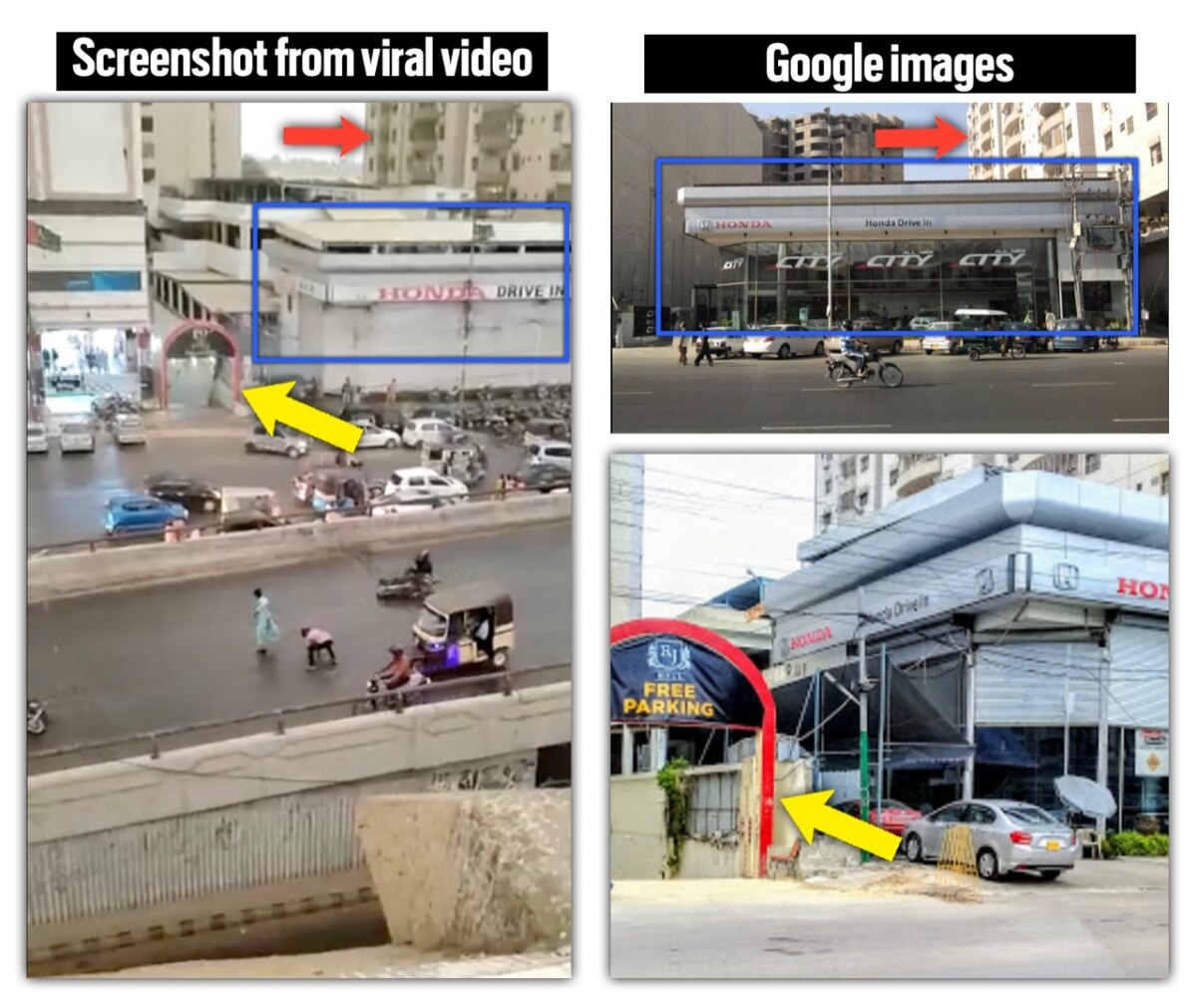 After comparing the Google photos with the screenshot from the viral video, it became clear that the showroom and the 'Free Parking' gate on the left are from Karachi city and not Navi Mumbai as claimed in the viral videos.

What caused the accident?
Keyword searches took us to a news report published on Geo TV on June 23, 2022, that had the same video. 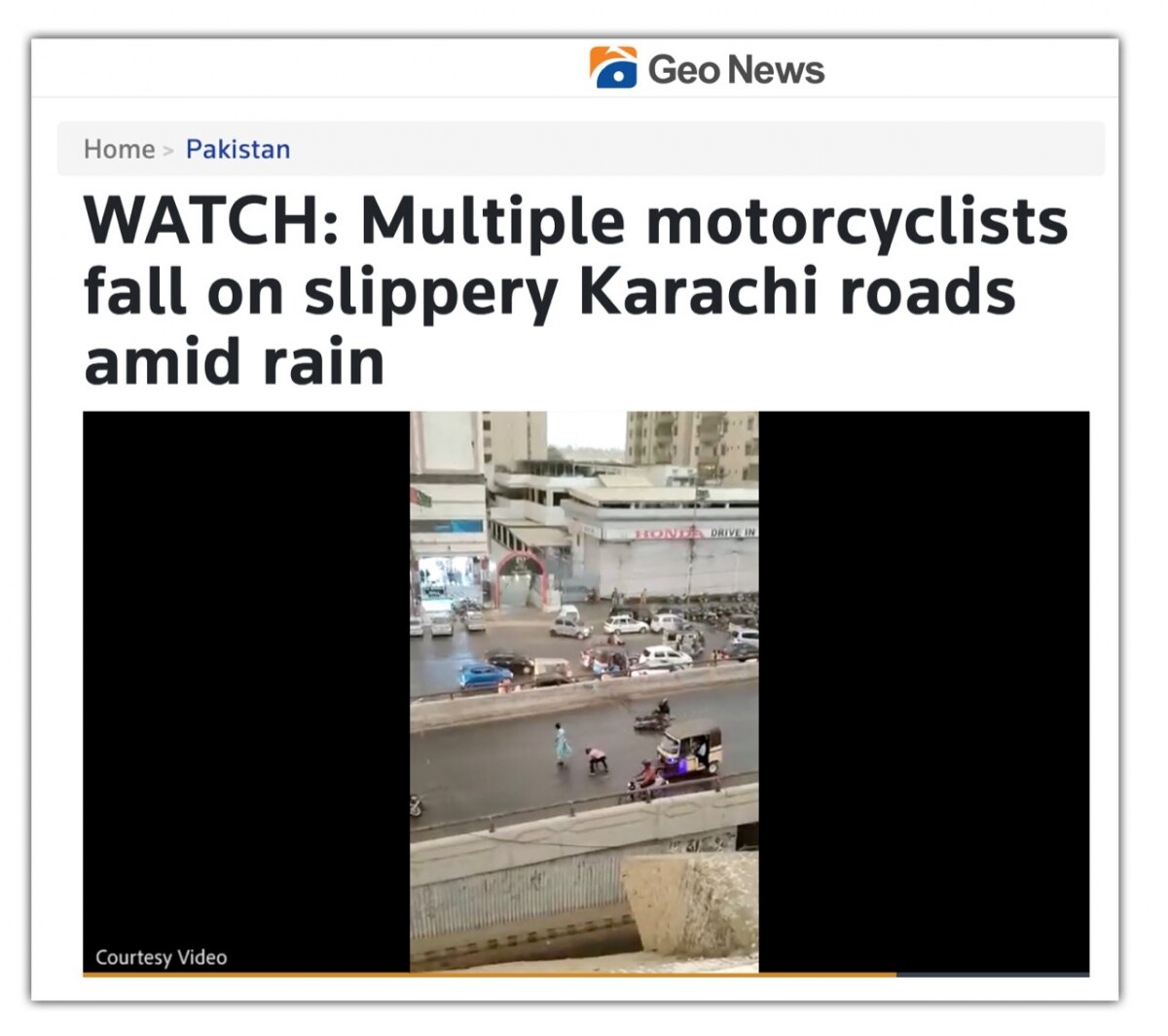 The report mentioned that these accidents occurred due to a slippery road amid heavy showers and an unexpected dust storm on Wednesday (June 22, 2022). Although no casualties were reported, some of the riders got injured in the incident.
The viral video was used in another news report from Pakistan that mentioned wind speeds reaching 81 km per hour in Karachi on June 22. Per a report on Dawn, four persons including three children were killed in Karachi following the 'unexpected' pre-monsoon downpour.
When we searched in Urdu for the video on Google, it took us to the YouTube channel of Capital TV. The video was published here on June 23, stating that it happened in Karachi.

Therefore, it is safe to conclude that a video from Karachi has been shared with a false claim. 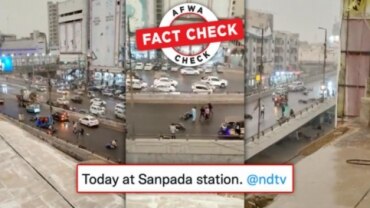 ClaimVideo shows how bikes are crashing in a flyover amid the monsoon in Sanpada, Navi Mumbai.ConclusionThis video is not from Navi Mumbai but Karachi, Pakistan. On June 22, heavy rain with a dust storm hit the city resulting in an accident. 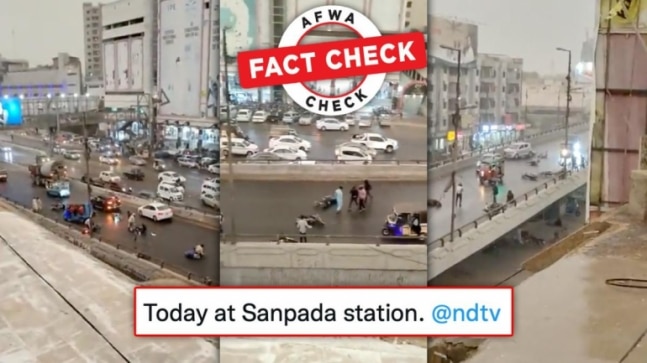 
JHOOTH BOLE KAUVA KAATE
The number of crows determines the intensity of the lie.

Want to send us something for verification?
Please share it on our at 73 7000 7000
You can also send us an email at [email protected]

A video of sea shore with Indians is viral as of Mumbai / Maharashtra.
This is from Oman.
You can view Indians,
people from Maharashtra as told in news.

In a tragic incident, three members of a family from Maharashtra's Sangli got swept away off the coast of Salah al-Mughsail in Oman. The unfortunate incident took place on Sunday afternoon when the family of 4 was playing on the beach in Oman. The video of the incident, which is now going viral, shows a violent wave sweeping away 2 kids, following which their father runs to save them. The father and his 6-year-old son have died while search is on for the 9-year-old missing daughter. Watch this video for more details.

Rescuers have recovered the bodies of two people out of three members of a Maharashtra family who went missing at Al-Mughsail beach in Salalah. The family from Jat village in Maharashtra’s Sangli district used to live in Dubai and had gone to Oman to celebrate Eid. The vacation turned tragic after 42-year-old Shashikant Mahamane, his nine-year-old daughter, Shruti, and six-year-old son, Shreyas, went missing in the Gulf of Oman, the northwest arm of the Arabian Sea. The bodies of Shashikant and his son, Shreyas, have been recovered. However, his daughter, Shruti, is still missing and rescuers are still looking for her. According to a Times of Oman report, the Civil Defence and Ambulance Authority of Oman said, “Two of the missing persons were found in Al-Mughsail Beach by the water rescue team at the Civil Defence and Ambulance Department in the Governorate of Dhofar.”