Dowsarpandi said:
Hi,
Any inputs on who is likely to the reliable operator in the Bangalore Guntur route? Both STUs are ruled out as I do not have any boarding point closer to southern part of bangalore(would prefer silkboard/electronic city). Amongst Orange, Morningstar, Sri Venkataramana and SVKDT, which is likely to be consistent in terms of punctuality and reliability? Am tempted towards Sri Venkataramana and Morningstar for the proximity to the boarding points. Inputs welcome.
Thanks in advance
Click to expand...

In times of puntuality please add an additional hour .

Of the above mentioned ones orange multisleeper is much better in terms of punctuality though its pricey. Svkdt volvo is a no nonsense service but the bus is a bit older one, instead you can opt for the sri krishna travels b11r. Svkdt and sri krishna sleepers are bit older ones but i have had a decent service and peaceful sleep at the cost of slightly higher travel time. Morning star has way too many services and expect clubbing on week days . please note the morning star services mostly dont go into city but drop you at their garrage where a pick up service drops you to the city so add an additional hour or so . sri venkataramana travels is an all leyland fleet and are aggressively driven . yatragenie has the oldest buses in this route . Rajesh and big bus operate fairly new buses .

I have always been a very reluctant traveller for friday/sunday trips for obvious reasons. If at all I had to, it is usually planned in advance to avoid last minute splurging of hard earned money in the name of tickets. However in the recent weeks, I am forced to travel on weekends, and could not plan in advance. So the usual last minute browsing for tickets started by 1800 hours on 5/4/5019 (friday). As usual tickets were super expensive and if at all there were few, it was last row seat at very exorbitant price and in a unreliable operator. KSRTCs were full. Was tempted to try SETC, but being friday and considering the amount of running around I had to do the next day, it made sense to choose a comfortable option. (During my younger days, I had yearned to travel by SETC for it offered pushback seats and I could sit through whole day of college with no fuss. Over years I have got so used to comfort that the thought SETC seems a compromise).!!!Whatever berths I could find were all on the double berth side. Not a single berth I could across 40 odd buses. Finally settled for the last low of Orange sleeper. Based on the layout, I made a misjudgment that it was single berth (horizontal last berth). This was probably the most expensive ticket I have travelled on this sector. The KPN journey couple of weeks earlier is now the second expensive journey of mine on this route. This happened to be the MYS - CHENNAI service, expected to reach E city by 2359 hours. As it turned out, the bus was late and reached E city at 0145 hours. The last horizontal row to my horror was double berth with one passenger in deep sleep already. I had to carefully crawl over him to the other side to reach my space. The berth was really long (whole width of the bus). However, the journey was bumpy althrough. Reached Chennai by 645 hours. I dont seem to have good experience with Orange at all - everytime I book for myself or family, the experience is pretty terrible. I remember occasional decent trips with their BNG -CHN sleeper, but even then, the other service was cancelled leading to chaos. I dont think I am going to travel by Orange in near future unless forced to!!.

Return
Since it was sunday, chose to leave Chennai before the usual rush and hence it had to be afternoon bus. Have been recently spotting Bharathi sleepers (fairly new) and the operator had listen 5 sleepers between noon and evening. So booked a single berth in the 1515 service (happened to be one of the regular priced) and chose to board at Vadapalani. Deep down I feared of getting one of the only second hand pair (run down) that the operator had. Bharathi had bought one pair of AC sleepers from Anand Travels (Ex Mumbai Mangalore). The boarding time was 1500 hours and by 1450 the crew called me to know my whereabouts. The moment I saw the MH registered sleeper descending the flyoer, my heart sank as it was the dreaded old bus. The charging points didnt work, no water bottles were provided and quite undisciplined and unprofessional crew of driver/attendant. After wasting close to 30 mins at omni bus stand, the bus left with probably 20 passengers. The bus stopped at every possible bus stop, the crew tried attracting passengers, wasted time bargaining hard and finally allotted seat based on the final bargain. Those who bargained for a lower price had to share berth with two or three more people. The lower berth was just on the floor which meant luggage, footwear were left in the passage. When no more passengers could be accommodated inside the passenger bay, the crew started to fill the cabin. The only saving grace was AC was working fine. Lesser said about the cleanliness of the bus. The bus crawled all the way through. At Pallikonda toll, I and few more passengers requested for a biobreak (4 hours to Pallikonda), instead of stopping near the toll plaza washroom, the moron stopped far after the toll was crossed. When we headed towards the amenities complex, the attendant came chasing asking us not to go there and instead use the roadside. The crawling continued. Asian, Parveen, Orange which would leave chennai by 1700 hours overtook us between Vaniyambadi and Krishnagiri. The most depressing site was rundown SETCs overtaking in a flash. The crawling continued and halted for dinner break the dreaded Saravana Bhava (few 100 metres before Mangalam). The service and food in this restaurant has always been awful to pathetic and it was no better this time. The crew kept hurrying the passengers who left their food midway. Worse - the hotel management always tries too rob few quick bucks from the hurrying and panicking passengers. I alerted a fellow passenger, who was about be cheated. In the heated conversation that followed, couple of Orange scania passengers realized their loss too. So the crawling continued and I got dropped just before E city at 2245 hours - close to 8 hours from the boarding time. Probably This round trip will probably would resist me from experimenting for the next few trips atleast. For the time being No more Orange in near future. Bharathi - yes if I am certain that I would not get the two "ready to condemn" sleeper.
Click to expand...

Dowsarpandi said:
An Experiment gone awry - Bengaluru - Chennai - Bengaluru
..............
Worse - the hotel management always tries too rob few quick bucks from the hurrying and panicking passengers. I alerted a fellow passenger, who was about be cheated. In the heated conversation that followed, couple of Orange scania passengers realized their loss too.
..............
Click to expand...

my sympathies for the dreadful experience, in both directions.
If you don't mind, can you kindly elaborate how this 'cheating' by the restaurant works ? By including extra items in the bill ? or something else ?
H 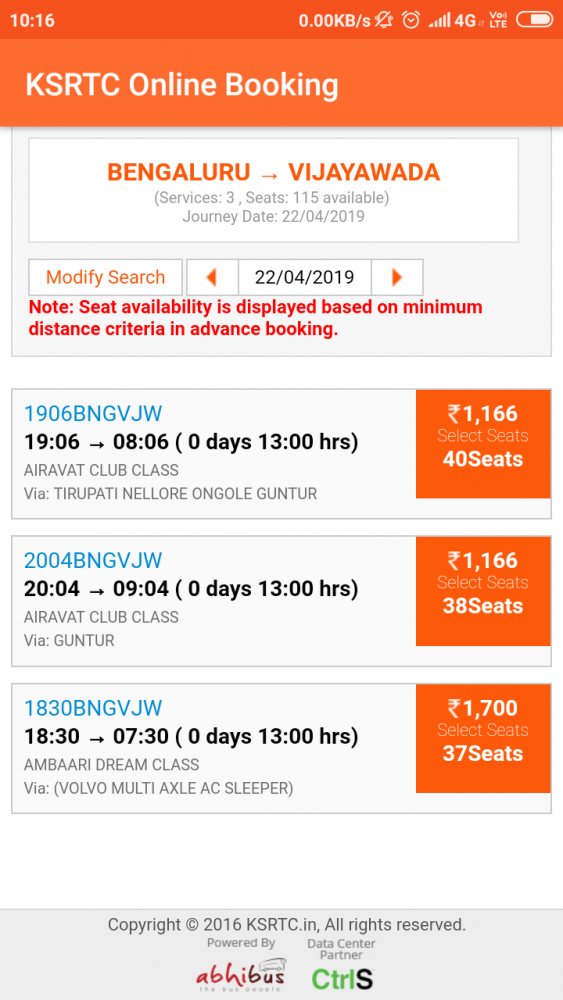 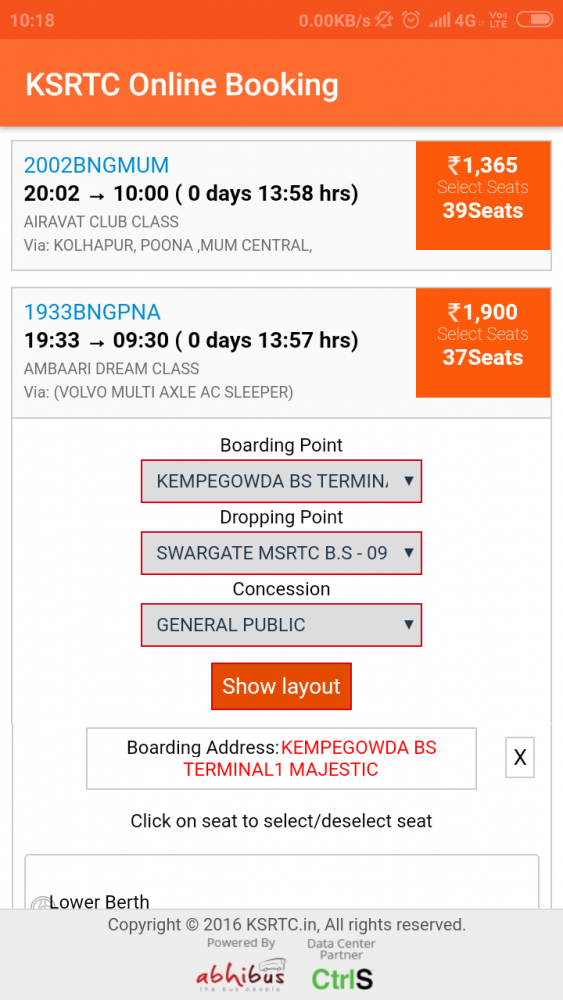 ++++++++++++
So Bangalore-Vijayawada got preference to Shirdi to get Dream Class.
Fares are premium to the berth reduction. ACC fare + INR 600.
D

Ambari Dream Class is launched also in Bangalore - Secunderabad [Hyderabad] in place of Ambari.
So booking this weekend on Saturday.

deepam said:
Ambari Dream Class is launched also in Bangalore - Secunderabad [Hyderabad] in place of Ambari.
So booking this weekend on Saturday.
Click to expand...

Frankly speaking staying lying in a sleeper for 18-19 hrs is very difficult. Travelled by VRL sleeper twice to Shirdi from bangalore, it is very uncomfortable after 9 am. VRL departed at 9 Pm and reaches Shirdi between 4 pm - 5 pm.Sleepers are good for 6 pm to 9 am journey time slot.

venkyhere said:
my sympathies for the dreadful experience, in both directions.
If you don't mind, can you kindly elaborate how this 'cheating' by the restaurant works ? By including extra items in the bill ? or something else ?
Click to expand...

All they do in this particular restaurant is a simple modus operandi. (1) create panic among the bus passengers calling them for departure. (2)Generally avoid digital/plastic payments (3)In the process, return u change lesser than actual. I have noticed them doing quite often. On this particular instance, the lady in the counter returned change for 200 while the customer had paid 500!. And more often than not, any change in coins is not duly returned.(4)in case there is a quarrel that happens, the security or the bus attendant would start calling out aloud while the driver would start moving the bus.

There is a board saying ksrtc authorised restaurant but it is not so!! A few day and evening services do stop here. Beware if you happen to or forced to use this restaurant
D

Srihari said:
Frankly speaking staying lying in a sleeper for 18-19 hrs is very difficult. Travelled by VRL sleeper twice to Shirdi from bangalore, it is very uncomfortable after 9 am. VRL departed at 9 Pm and reaches Shirdi between 4 pm - 5 pm.Sleepers are good for 6 pm to 9 am journey time slot.
Click to expand...

++++++++++++++++++
Bangalore-Hyderabad is ~ 10 hours of travel time per KSRTC driving standards.
The biggest issue why the journey gets boring is you will not be able to pass your morning stool on time! That creates the uneasiness in travel. Once you clear your bowel and freshen up you will feel better.

I have analyzed this in my trips from Manipal to Hyderabad.