Unplanned trip and long weekend so worried about getting seats in bus. started from office around 5pm and reached PGL Saw nanjil new SETC and bus left when i crossed the road. TMR seater cum sleeper parked near sriram gateway. asked seat he said only driver cabin available and price is 900rs. Too much so left. then decided to go new SETC. asked PGL time keeper he said 8pm SETC tirunelveli have one seat. but he is not sure about new bus or old. so i was just waiting.Mean while Selvam,2 YBM crossed. one new SETC came and well known driver. just asked him he asked me to get in front row left seat. bus got filled and he didnt waste any time. he moved with full pace. we reached around 9 first toll. he stopped bus for 5 mints after bio break and checked air in all tyres. bus started good pickup i hope he maintaine 85 to 90. my mobile gps said 97. we overtook selvam travels and VIGnesh TAT before dhindivanam. again selvam overtook us. i saw in toll. then we left before him and they stopped the famous motel. SETC should change this place. second driver got in seat he was steady phase.i slept and got up when bus were parked outside trichy. time was around 1.20am. first driver got in seat we dropped couple of people in madurai and got full load again around 3.15am. bus reached tirunelveli 6.20am. with one more break. overall good speed. 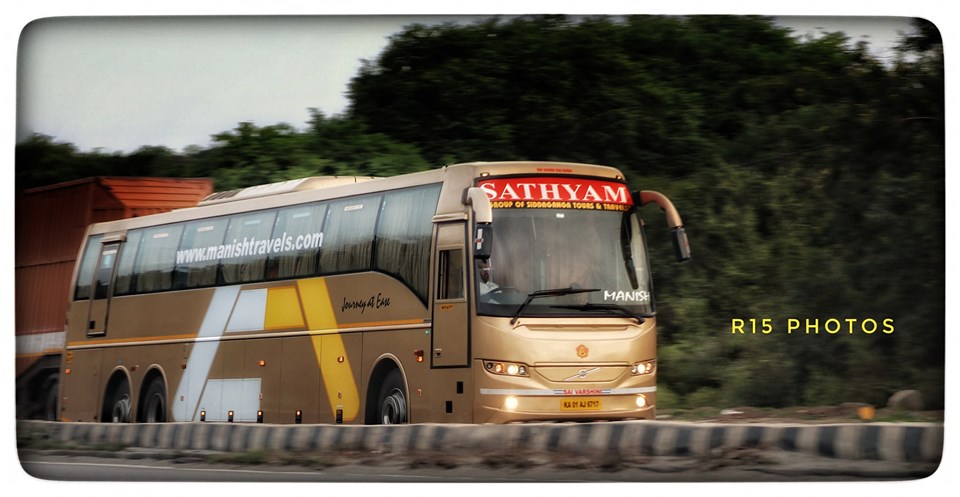 I started from my house around 18:10 hours to reach MGBS by 19:15 hours. The bus had reached MGBS from JBS Secunderabad and arounnd 19:30 hours bus was put into the platform.
There were around 30 passengers. 1 passenger did not turn up and crew called thrice and every time the hero was saying that he is just outside the bus stand and coming. Finally Crew started the bus at 20:00 hours. Thanks to the Ganapati previous weekend near Nayapul the traffic jam was there and when the bus reached Shamshabad it was 20:50 hours. OMG movie was being played. Then around 21:10 hours bus was stopped by the side. When the bus crossed Shamshabad it was close to 21:25 hours, dinner break at 21:45 hours Hotel Sandarshini [bus was late by 30 minutes]. OMG movie got over before the bus reached Sandarshini.
There was fight to park as TSRTC and KSRTC buses had already filled up. Dinner break was ~ 30 minutes.
Post Dinner break till next L&T Toll [@ ~23:20 hours] I sat in the conductor seat. It was raining heavily and I came back to my seat to doze off. Only to get up when the bus had reached Devanahalli toll. The bus dropped passengers at Hebbal and reached Majestic by 5:55 hours. Late by 45 minutes and proceeded to Satellite bus stand. 1 passenger who had booked Bengaluru - Mysuru in Chennai to Mysuru service was picked up; as Chennai bus was yet to reach Bangalore thanks to traffic jam in Chennai.
I was surprised to see that Hyderabad - Mysuru bus KA57F2509 which had departed Hyderabad at 18:30 hours was still in the front.
Due to Ganesh weekend; the traffic inspector did not allow 2507 bus to start immediately, so crew asked passengers to shift to 2509; I preferred to stay in the bus as I was not sure how that bus will be driven! 2507 bus [I was in] started at 06:57 hours from Satellite bus stand with ~ 35 people on board. About 5 persons asked the crew for a breakfast break and crew decided to provide Breakfast break around 8:20 hours at Hotel Annapoorneswari; first stop per the new rule of KSRTC [as Kamath parking is being lost in Road expansion].
Post break fast we started at 8:40 hours and I dozed off for some time only to wake up as the bus was entering Mysuru near Colombia Asia Hospital.
Entered Mysuru bus stand at 10:10 hours, good 100 minutes delay. Mentally I was prepared for the delay from the start of the trip and this was not a surprise to me. So instead of returning back to Hyderabad same evening; I planned to start my trip next day morning.

Coincidentally this is my 3rd trip in the same bus with crew and this bus had covered 4.8 lakh km. As this bus is run on fairly good road, crew said no major parts are replaced except the Engine oil / filter.
D

raraveendra said:
Back in 2012,13,14,15 etc. there was a daily service from Mananthavadi to Trivandrum. The operator was Priyadarshini transports who had 2 Ashok Leyland A/C buses built by Veera. They didnt have online booking only counter/telephonic booking was available. Have traveled in this buses numerous times and always had great experiences. They have been inoperational for the past couple of years - anybody know the reason for this? I suspect some kind of a financial problem.

+++++++++
Request to include this in TATA or AL buses thread.
My view and suggestion; let us have this thread only for MAV of Volvo, Scania or MB.
D

Saw this on facebook today of KPN Starz buses 04 in number. Not sure on which route this is being deployed on:
KPN Travels
D

KSRTC Mangaluru 2 depot has deployed Volvo B11R on Mangaluru - Hyderabad route KA57F3602 or 3603.
Hope the journey can be quick.
D

deepam said:
Saw this on facebook today of KPN Starz buses 04 in number. Not sure on which route this is being deployed on:
KPN Travels
Click to expand...

deepam said:
+++++++++
Request to include this in TATA or AL buses thread.
My view and suggestion; let us have this thread only for MAV of Volvo, Scania or MB.
Click to expand...