Has Vishal Travels stopped operations on Mumbai Mangalore route. They were operating Non AC Seater/Sleeper services since a long time after they sold their 2 Volvo's. Have we lost one of the legendary operators on this route

Even Chirag Travels have stopped operating on this route. They operated with Scania Semi Sleeper and Scania Sleeper
T

Off topic: What will be the best way (hassle free/reliable/safe) to transport a bike (Fz) from coimbatore to chennai???
D

raraveendra said:
A very unfortunate incident where a lady was hit by an open luggage door of a KeSRTC scania bus, and killed in the accident. Wondering if the driver / cabin crew will be alerted on the open luggage box? I have seen in Volvo buses if the side door is open, a hazard alarm is triggered until closed.

______________________
Such an unfortunate accident.
I have reported to this accident to Scania and Volvo requesting for improved feature to immobilize the bus if door is open. Scania India 2 emails have bounced back. Dropped to the global email address.
D

Sach23 said:
Has Vishal Travels stopped operations on Mumbai Mangalore route. They were operating Non AC Seater/Sleeper services since a long time after they sold their 2 Volvo's. Have we lost one of the legendary operators on this route

Even Chirag Travels have stopped operating on this route. They operated with Scania Semi Sleeper and Scania Sleeper
Click to expand...

______________________
Low season demand, may come back in October.
Looking at their Website: translation missing: en.themes.cms_schedules_title| Vishal Travels seems they have shut down Mumbai operations.
D

Chirag I do not think was intended to continue operations except during Peak time.
Some travel agent in mangalore would have leased their bus and operation for Short time. Post Konkan railway this route is not lucrative enough for any bus operator. VRL and SRS with their clout are operating consistently.
D

Another trip. This trip is different, My trip usually towards KR Puram Marthahalli but this time its to Shantinagar. If we reach early its waste of time if we start late we might stuck in traffic. My first idea is to try the New SETC Sleeper but still I browsed Redbus. Bingo! There was two services with affordable price at my time frame. National B11r and Asian travels Sleeper. Actually National is rs.50/- cheaper than Asian. But the ratings is down. I dont want to face the risk of "Seats changed~Double booking blah blah etc etc" Booked in Asian Sleeper Double lower berth.
Reached the boarding point at 02.15 for at 03.00 pm departure. By 02.30 came the Greenline Scania from Bangalore it had few pickup and drops, by 02.45 came the National B11r it had some 5 bookings from Vellore at 03.10 pm came my bus. Hurray! its the new Capella Sleeper, the interiors was awesome the berth was so spacious two adjustable ac vents one fixed vent to the legs were provided. No TV or baggage tray was installed. Waterbottle Snacks was distributed. I asked the attendant "Shanthinagar poguma?" he smilingly replied definitely we'll go. The Driver maintained Steady pace 85-95 range. Took a Lunch break at Pallikonda Sai Akshayam rather than Vaniyamabadi outlet. National was already parked there. After 20 mins break started again
Reached hosur by 06.10 pm there was hell of a traffic there attibele toll took 20 mins two passengers even asked for a biobreak, driver jovially replied "of course go and come, dont worry even if we try we cant leave", BETL the same TBH we are standing still in the bridge for 15 mins reached madiwala at 07.10 pm (thatss right Hosur to Madiwala in 1 hour) vehicles were moving inch by inch, I was worried since I wanted to be at Shantinagar by 08 pm after all the crawl reached Shantinagar at 08.20 pm.

Verdict: The bus I travelled is Ashok Leyland I dont know whether it is a CRS one, the engine sounded like the same other SETC buses engine, Engine noise did enter the cabin the sound insulation is not that great (compared to this APSRTC Indra was so quiet), the body roll is Nil (I'm in the lower berth and driver was maintaining steady speed).

Service: Once again top notch service by Asian travels, I've made countless trip in their Scania, B9r. This is my my first journey in their Sleeper the service is indeed premium. Only Negative point there is no Luggage rack in the Berth. The crew were polite and driving was sleep friendly.

Timing:3/5 (The Scheduled reaching time to Shantinagar was 07.10 pm but we reached only by 08.20 I dont blame the Operator but the traffic)
I'll definitely recommend this service

Bangalore Kumbakonam ACC
This is a sequel to my Bangalore Vellore trip. We planned a pilgrimage trip on a short notice. Our first idea is to try the Bangalore Mayiladuthurai Train. But the waiting list is heavy. KPN Non ac sleeper is recommended but the ratings scared me, RKT, rathimeena also considered but the boarding point is not comfortable for us. Still I almost went close to book KPN finally at last min I ended up booking ACC.
We reached Shantinagar at 08.20 pm had dinner and reached to the platform by 9 PM. Since it was a weekday the crowd was less and most of the buses were running with single digit Occupancy. Only Mysore-Bangalore B9r has some decent occupancy, My bus was struck between Ernakulam B9r and Bangalore-Munnar Non Ac Sleeper, the Ernakulam bus refused to move even at 09.25 pm the Banglore-Munnar Non AC Sleeper behind us made some tight squeeze overtake and left the Bus stand my driver did the same and came out of the stand at 09.30 pm.
The traffic was tolerable, next stop at St.johns signal 1 pax boarded Silkboard 1 driver didnot take the BETL we caught the Munnar Sleeper here Electronic city no pickup Hosur didnt even stop. The total occupancy was just 14 passengers including us. Oh! Forget to mention..we got Suraj Holidays B11r Sleeper company all the way to Hosur, that bus is definitely a eye-turner.
My bus is a old b9r, Hand rest, Seat Calf were broken is many seats. But what I liked is the Suspension the bus made no unwanted noise, squeak even in the worst trichy-salem stretch. We took a break as Saravana bhavan Classic. This Hotel is a heaven for BusManiac. We got around 5 buses for company and it was a heavenly sight to watch all those Keralalines, Kallada, KPN Multiaxles flying in high speed. Especially the Keralalines Scanias was really doing high speed. Started after 20 mins alongwith Ernakulam Rajahamsa within a min the Mysore-Chennai ACC overtook us. Our driver maintained steady 80-85 km speed, we were overtaken left and right by Omni Buses, the driving was steady which made me drowsy I slept even before Dharmapuri only to wake up by the bad Salem-trichy stretch, at one point the driver landed in a big pothole which woke up the whole bus, after the bumpy ride reached Trichy at 04.10 am. Parveen Deccan Auto, YBM, SRM were all dropping passengers.

The road become better after that we took a quick biobreak at trichy outskirts. Still it was the driver at the wheels and the conductor was deep sleeping. Reached tanjavur at 05.30 am dropped couple of pax once again the roads started narrowing, overloaded tata ace, tractors occupied the roads finally reached Kumbakonom Bus stand at 07.30 AM.

Verdict: The Driver is a sleep-friendly driver he maintained perfect gear change and never dragged anywhere the bus was so old the interiors were dull, seats after the middle row were all suffering malfunctions, in some seats the AC knob were useless blowing cold air from the gaps. But the suspension is too good and the engine noise is minimal for its age it made me sleep in no time on plain roads.

This is one of the reliable service in Trichy-Tanjavur-Kumbakonam route all the other private buses mostly have negative reviews. The running time is 10 hours for 450 kms which is not bad.

SRS travels sleeper bus met an accident near Satara. Which was doing Mumbai to Belgaum. 6 people were passed away and 20 people got injured. RIP.

Amogha said:
SRS travels sleeper bus met an accident near Satara. Which was doing Mumbai to Belgaum. 6 people were passed away and 20 people got injured. RIP. 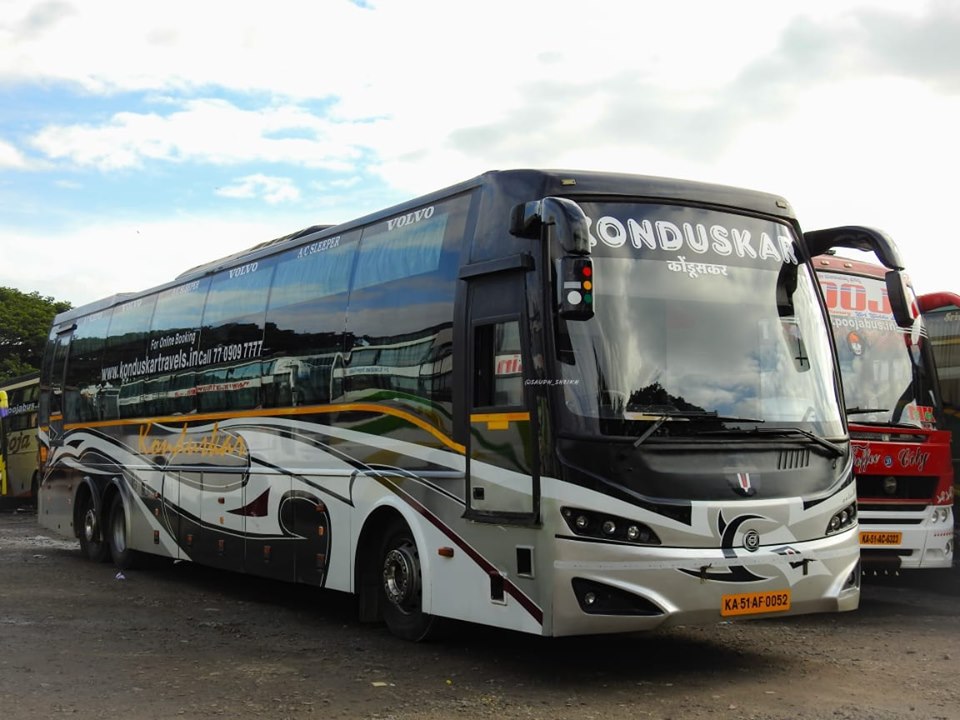