Well travelled in this Service after a long time after the Service was upgraded from ACC to ADC. The regular bus [KA57F4291] had major repair and this Celeste Prakash bus was doing the honours. Prior to KA57F4291 and 4292, these buses KA57F3934 and KA57F3935 were doing the honours and once 4291 and 4292 were assigned to Mangalore 2 Depot; these were inducted to the route.
The Bus crossed Shamshabad close to 6 PM and had Jadcherla pick up by 7:10 PM.
The bus stopped for Dinner post Devarakadra at around 7:40 PM a Veg hotel earlier this bus had dinner break at Raichur Bus stand.
Dinner break lasted for 30 mins.
As we were about to start, the Hyderabad - Udupi KSRTC Non AC Sleeper pulled in for Dinner Break.
Pic captured at Dinner break is posted.
POst Dinner break, I dozed off only while the bus was entering Raichur and was heading to Depot for filling up the Diesel. 225 litres of Diesel was filled in.
Post Diesel break; bus headed to Hubli. The buses headlamp bulbs were quite weak and drivers had difficulty, also the bus had gears slipping occassionally and the bus reached Koppal at close to 2:20 AM. Bus reached Hubli at 4 AM [I was fast asleep]. Bus had no other Mechanical noise and engine was smooth.
The bus reached Kundapura at 9:00 AM, morning break for tea was provided and bus started at 9:30 AM and I was finally dropped at Manipal by 10:15 AM, probably would reach Mangalore by 11:30 AM [an hour late].

Bus started around 9 AM and reach Hubli at 11:00 PM and had to head to New bus stand and was there around 11:15 PM.
Bus reached Raichur Bus stand at 4:35 AM.
Bus started around 4:50 AM to reach Bhootpur at 7:15 AM and Break fast break around 7:20 AM at Udupi Krishna Veg.
PSR Travels Mangalore-Hyderabad service had reached earlier and it departed followed by Bharati AMMR. By 8:10 AM bus started and between Bhootpur and Jadcherla left 2 lane was closed for widening of Railway Bridge for double laning. So there was slow traffic movement. Kallada [Nagercoil-Bangalore-Hyderabad] bus overtook our bus. Followed by Alhind Celeste bus. All buses were met at Shamshabad, no muc difference in timings. I was finally dropped off at Afzalgunj at 9:30 AM.

Along with PSR rear: 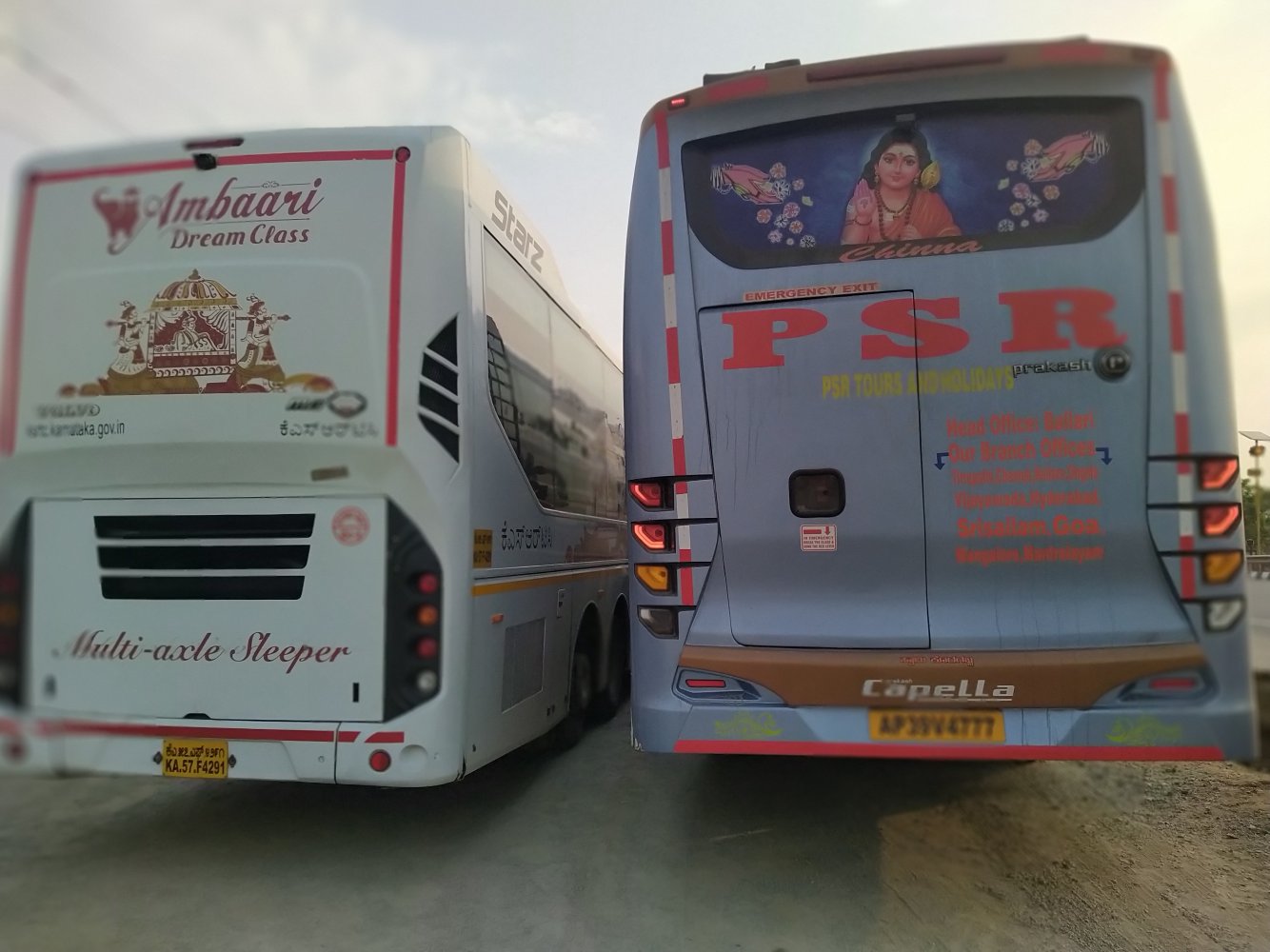 Along with PSR front view: