I love to travel and indulge in photography.

And I love to travel for photography.

However, as much as I love to travel and do photography, there is nothing like wandering.

Whether it is riding aimlessly without any set destination in or out of the city or hopping on the first bus the heart sets on and traveling to whichever place it leads to, even if it isn’t something I thought about at the beginning of the journey or even the supposed destination of the bus!

I guess I like handing off the navigation duty to the Almighty, even though when out traveling with friends, they like me to help navigate, not realizing, I plan on outsourcing it to the God!

With my birthday around the corner, a birthday party was planned at Neha and KP’s place and around that time, I came to know, Mansi was heading off to Rampur in her car.

She offered me a free ride + food until Rampur and even Rs. 20 to help off-load the TV at her home. And I jumped on the opportunity, seeing it as a perfect opportunity to earn some extra cash.

Sadly though, I never really got paid (you just can’t trust these Rampurias.)

But what I did get, was a wonderful opportunity to do what I love the most, wander. And this is my tale of wandering, just as I turned 35…
Last edited: Dec 26, 2017

Delhi to Noida to Rampur and then, Haldwani

After a fantastic party at Neha and KP’s place, it was time to head to Noida to begin the first leg of the journey to Rampur.

The only set destination was Rampur, after that, I was free to do whatever I liked and head wherever I wanted, as long as I was back in Delhi on Tuesday morning. And it was around 3 pm when we finally left Mansi’s home in Noida and began our journey to Rampur.

Initially, the road was crowded and as usual, traffic sense completely missing. So the going was a little cautious and slow. However, soon the NH-24 widened up and the traffic lessened enough for us to gain speed. 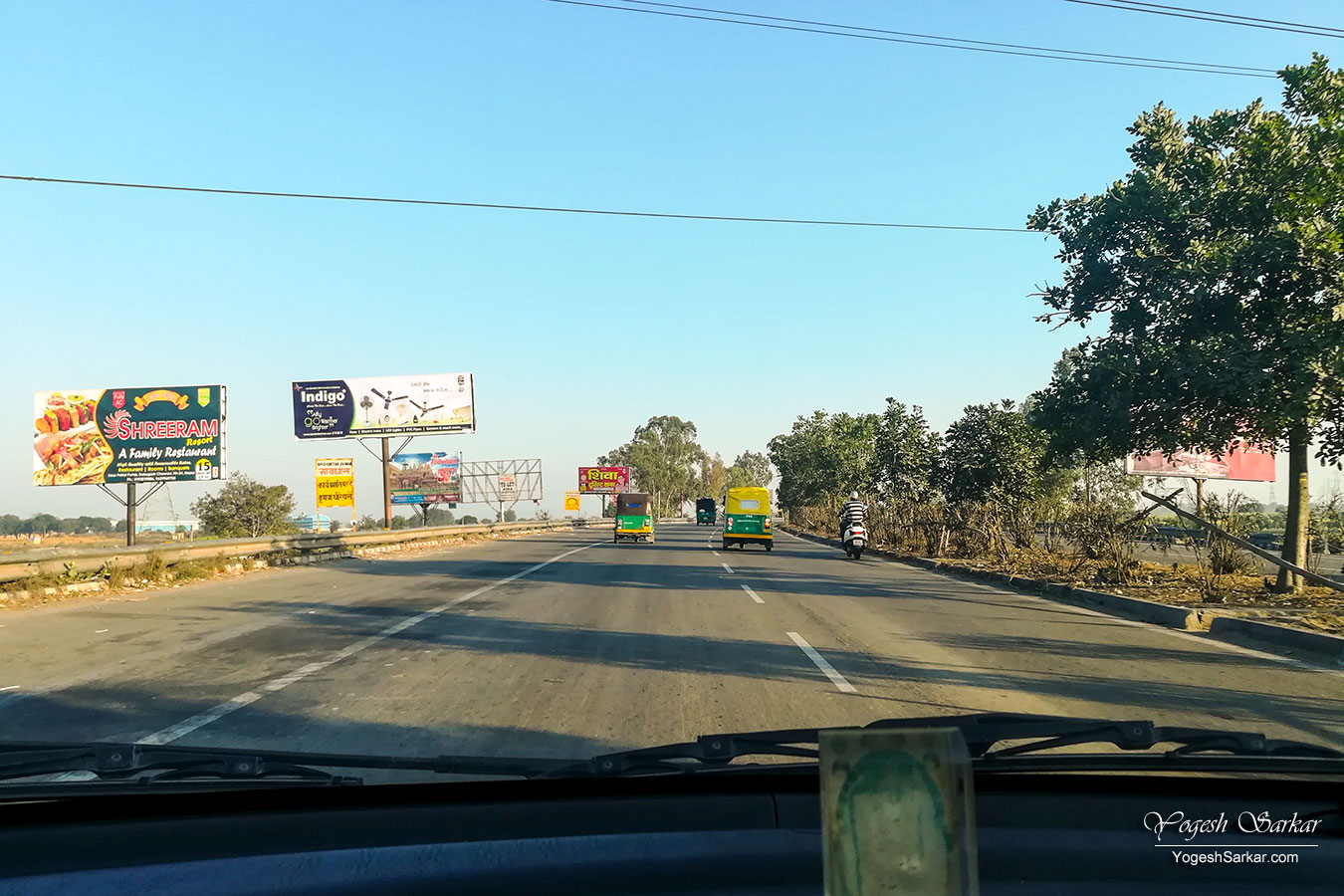 I have been on this highway numerous times, en route to Kumaon. However, this was the first time this year, that I was traveling on the NH-24. I was badly missing Kumaon and couldn’t wait to get there. However, for now, the journey was all about reaching Rampur and with the music on and non-stop chatting, we managed to cover distance fairly fast.

Now the sunlight was beginning to faint and the landscape and the road was illuminated by the beautiful golden light of the setting sun. 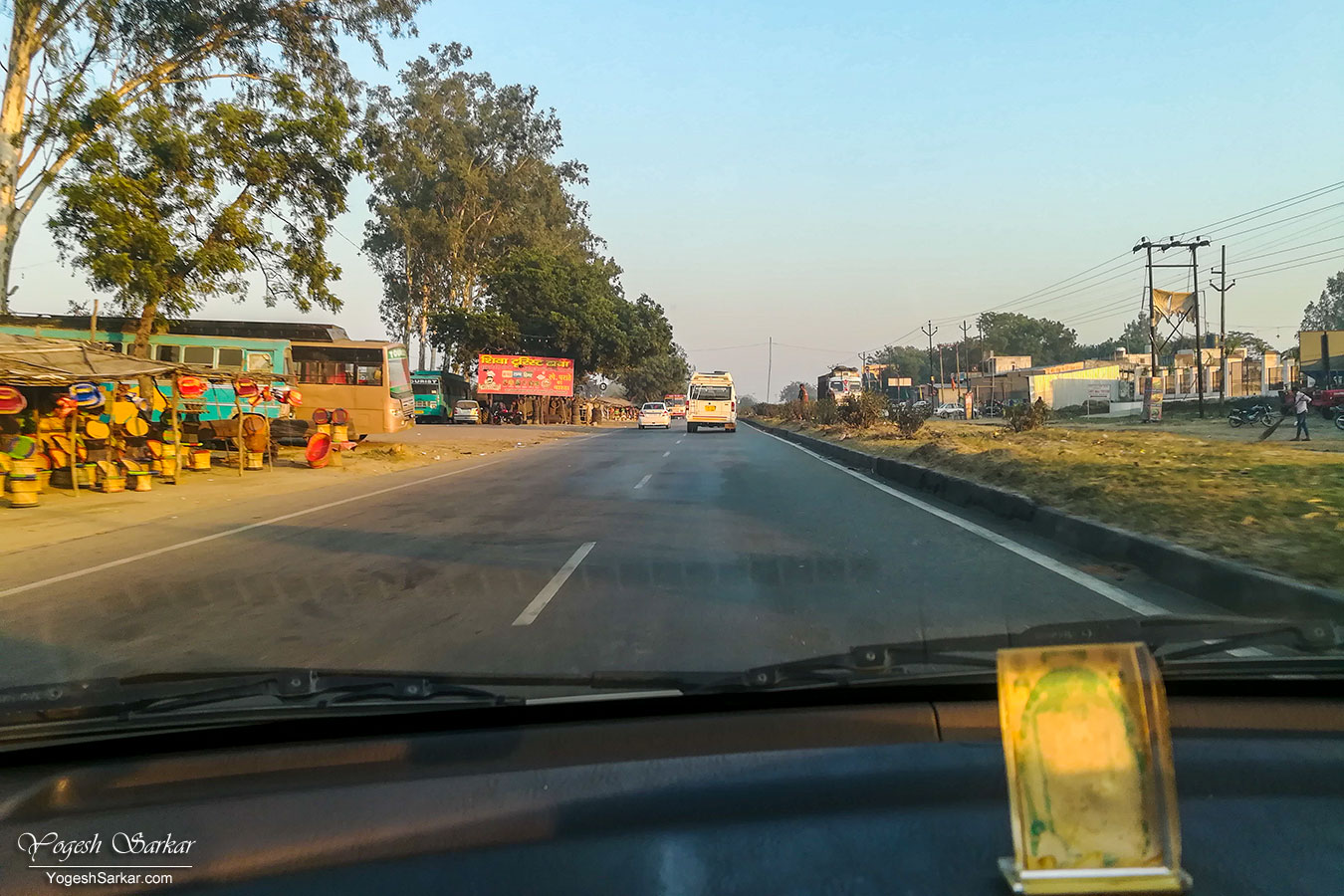 Around 5 pm we stopped at Moga Tourist Dhaba for a late lunch, just before the Gajraula flyover, on the right-hand side. 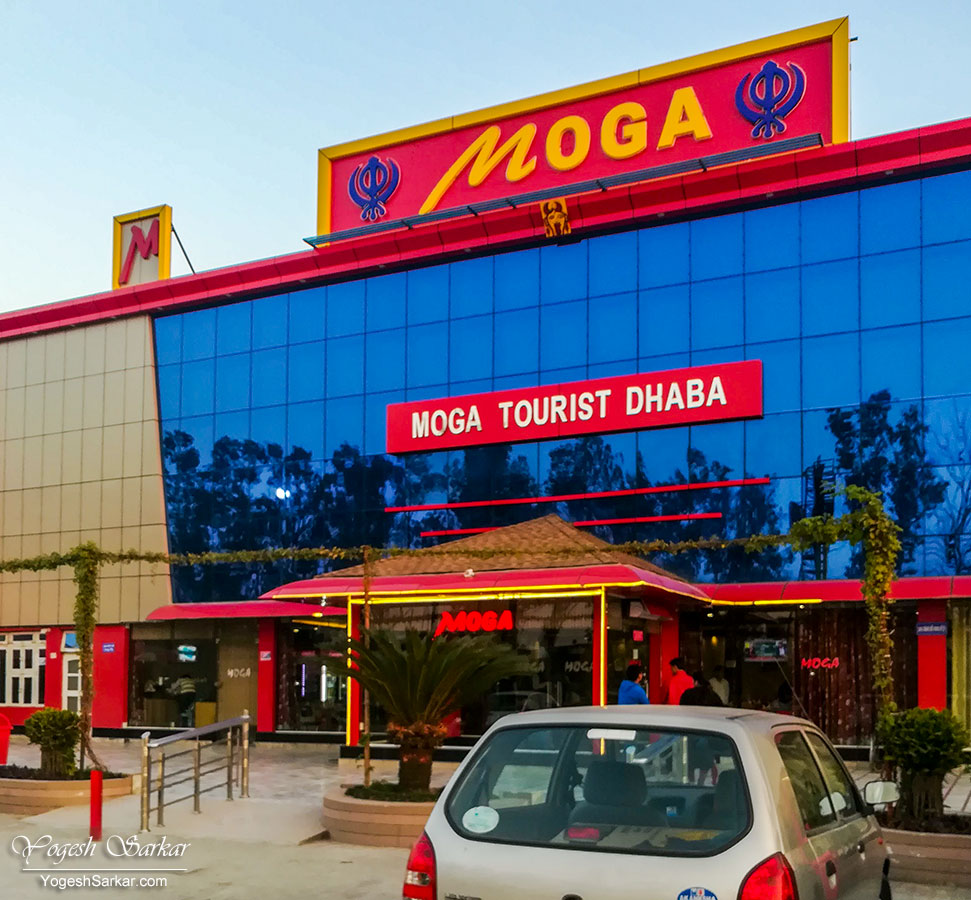 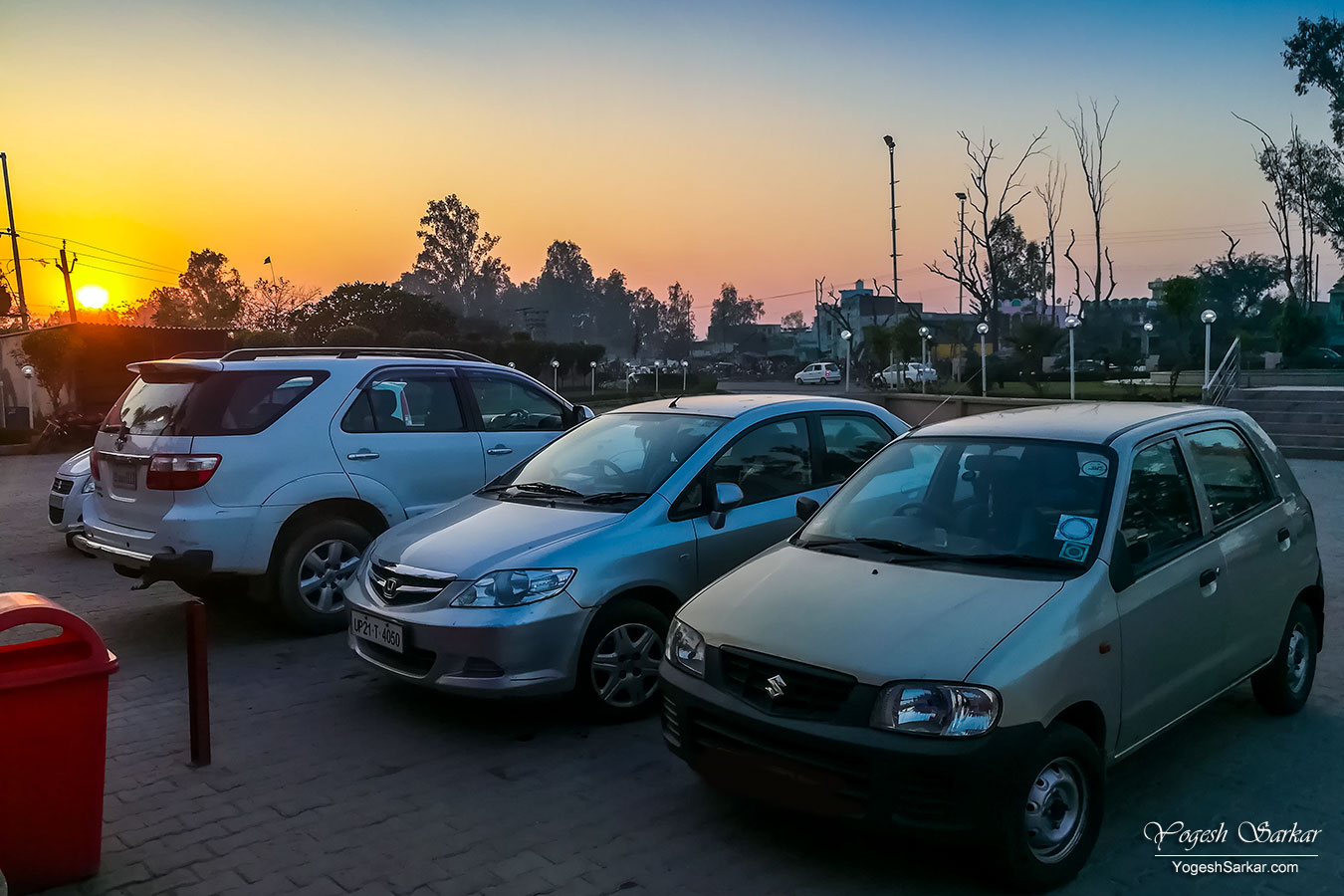 This was one of the favorite pitstops of Mansi and her family and since she was paying , I wasn’t going to protest against stopping here.

We ordered a couple of teas, a couple of aloo-parathas, a gobhi paratha along with dal makhani. Food was decent and fairly heavy, though it wasn’t memorable. However for just Rs. 330, I guess there isn’t much to complain about, since the place was neat and clean, with good parking and fast service. 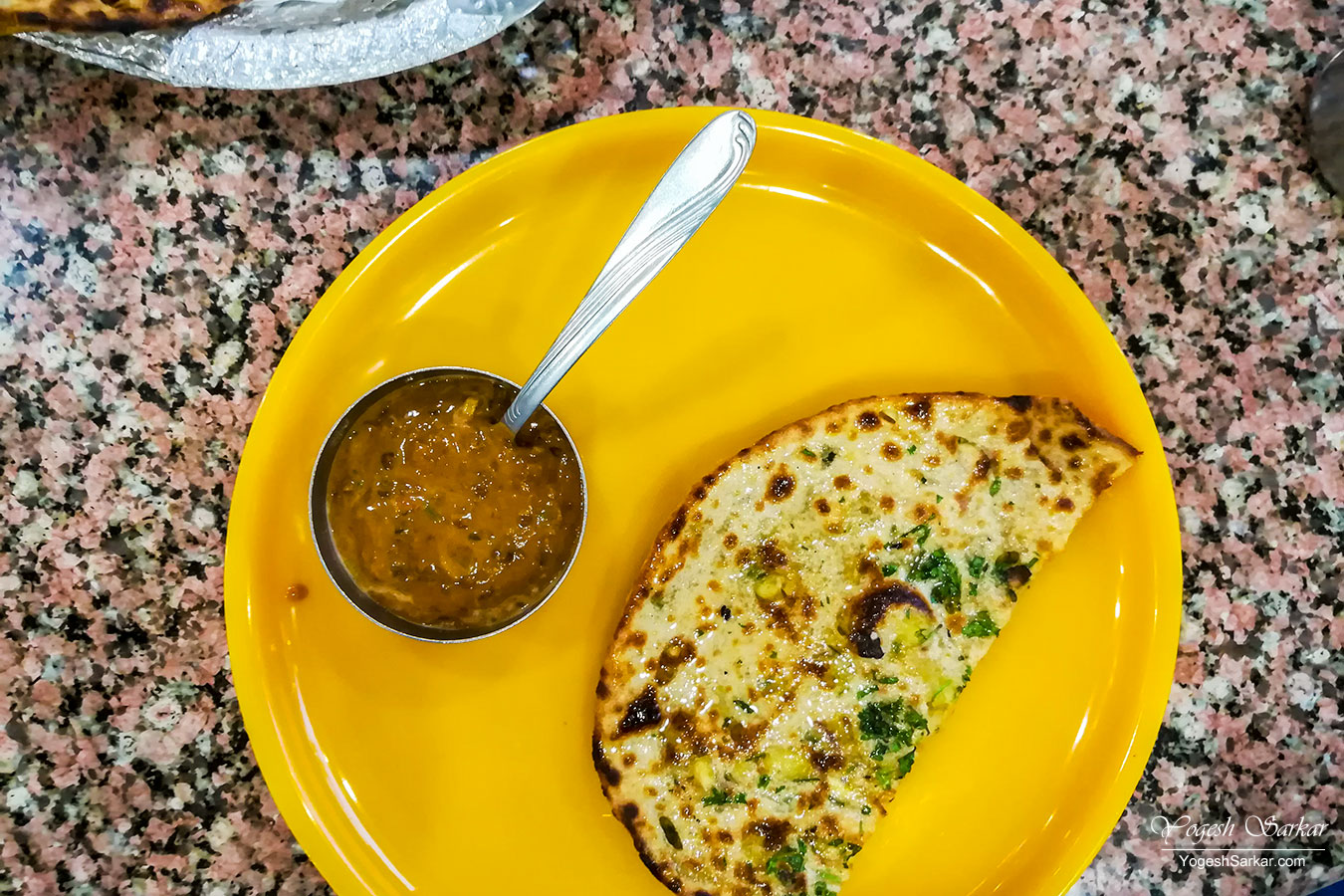 It was time to hit the highway again, having taken a 40-minute food break. However, before that, it was time to take a portrait of the lady and her ride. 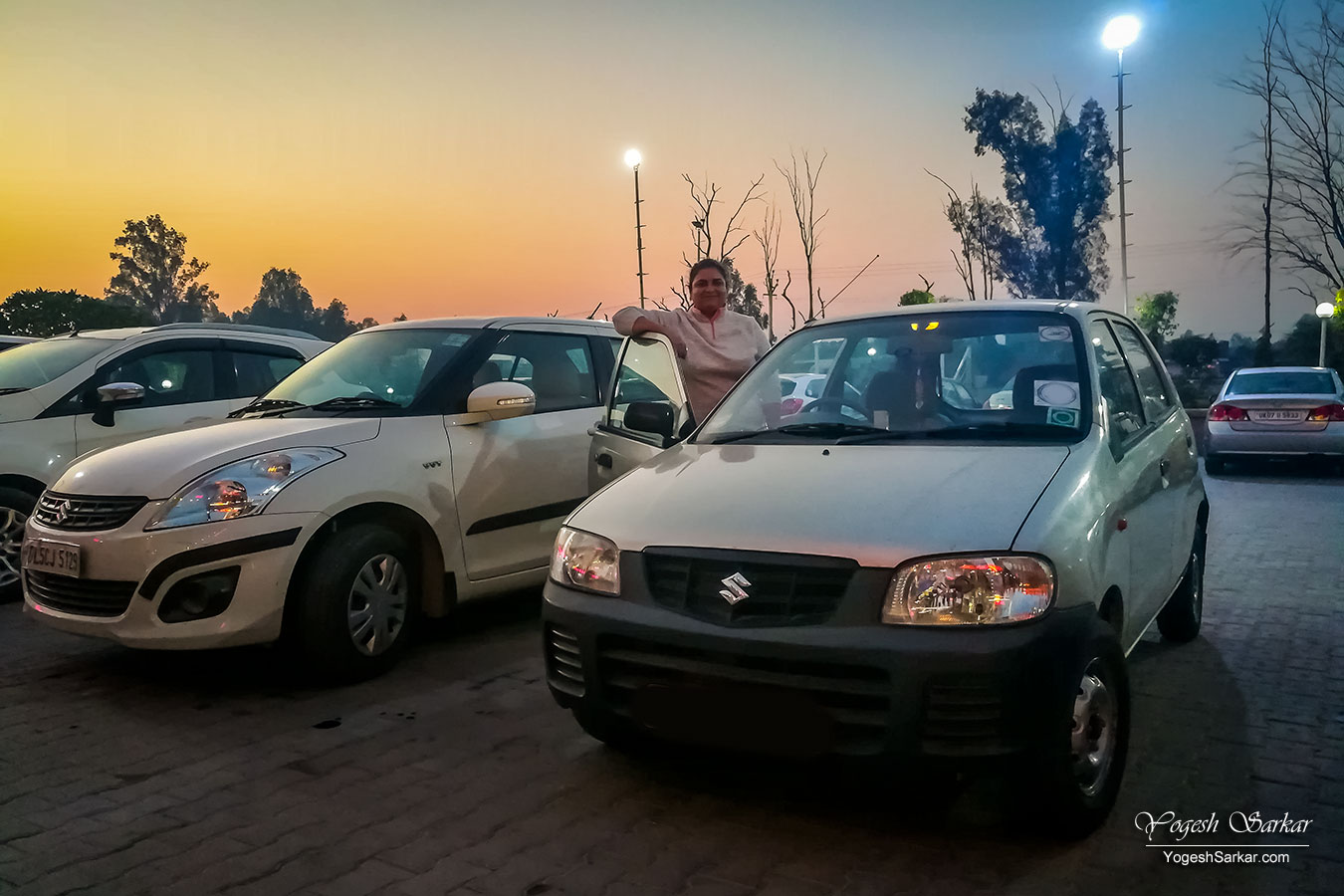 Now it was getting dark and Mansi doesn’t like to drive in dark and to top it all, her car’s brakes weren’t working well. However, she drove the car just fine and we made good progress, even though we were slowed down multiple times by the tollbooths. 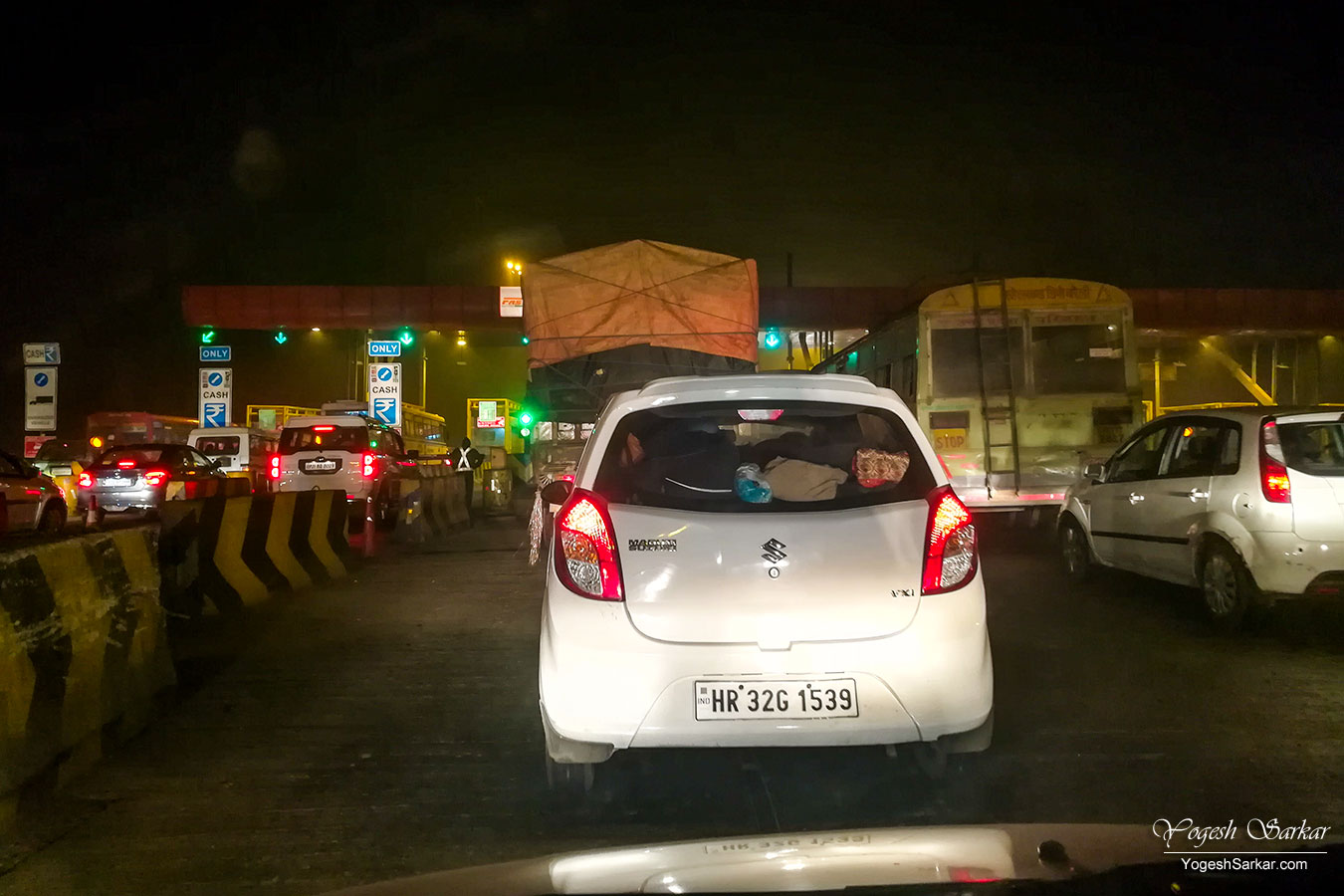 We managed to reach Rampur around 7:15 PM and after a brief tour of the city i.e. Gandhi Samadhi, we headed to her home.

I helped offload the TV but didn’t get paid. I did, however, get treated to tea, snacks from Rampur and couple of parathas for the journey ahead.

Then Mansi and her mom drove me to the Rampur bus stand, where they waited along with me for half an hour. I finally managed to convince them to head back home and just as they left, I got a UPSRTC bus to Haldwani.

I had to pay a grand sum of Rs. 91 for the journey till Haldwani in the rickety bus. Though thankfully, Rampur – Rudrapur Road was broken, but without any large craters to make the journey overly uncomfortable. 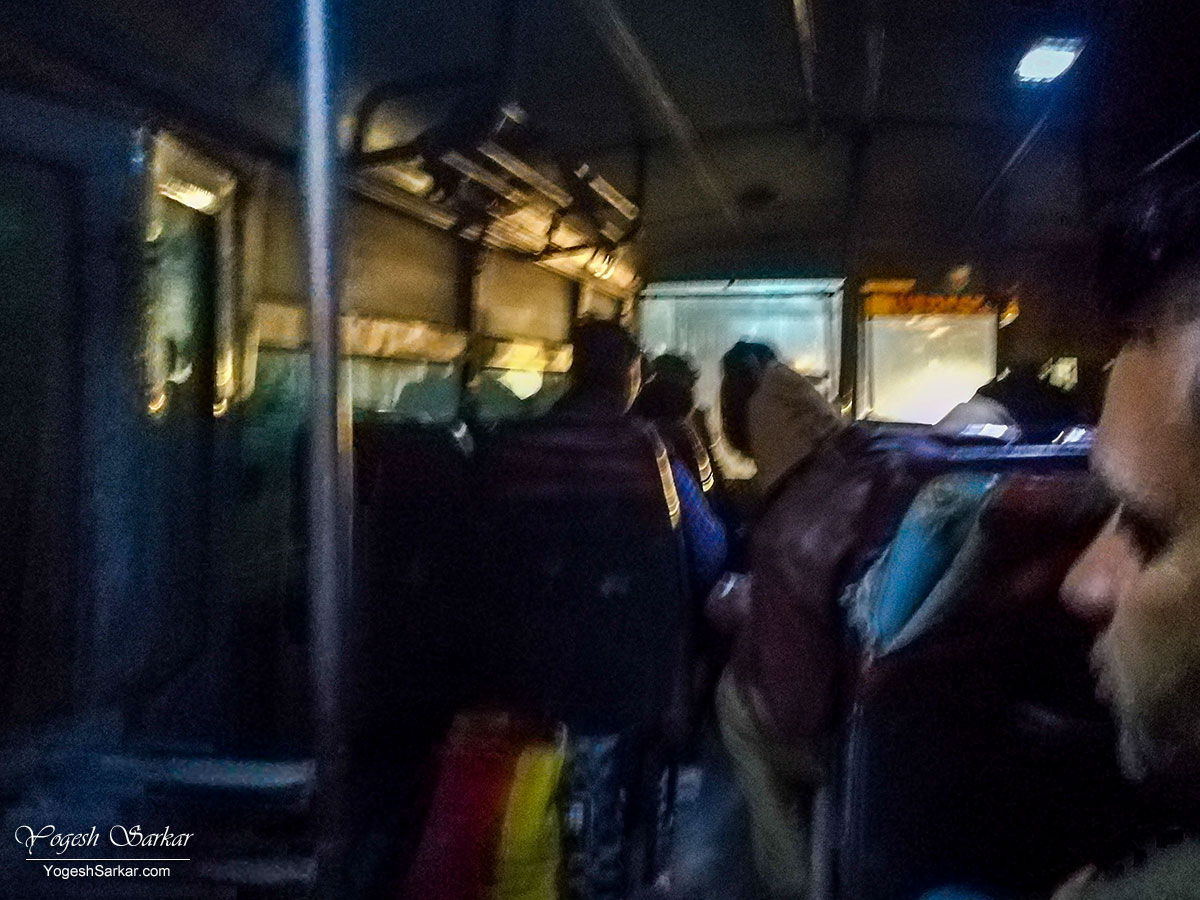 With the headphones on to drown out the noise of the world around me, I was now in a familiar setting, all by myself. A smile came to my face and although there was a chill in the air, colder than my monsoon trips, it all seemed oh so familiar and wonderful.

I had missed this badly, just how badly, I never really knew, until that point.

I guess wandering alone is an addiction, that just can’t be satiated by other forms of travel.

It is extremely personal and unexplainable, and for those who believe in the God, spiritual as well. And it doesn’t matter whether you’re in a comfortable Volvo Bus or a shared taxi, packed like a sardine in the last bench seats.

It is a pleasure unlike any other.

It was around 10:15 pm that I managed to reach Haldwani, as the bus dropped me off in front of the Haldwani bus stand, almost a couple of hours after I had boarded it at Rampur.

Haldwani Bus-stand was the same as last year, nothing really had changed. Though the new UTC buses were parked in the midst of the older ones, waiting for passengers. 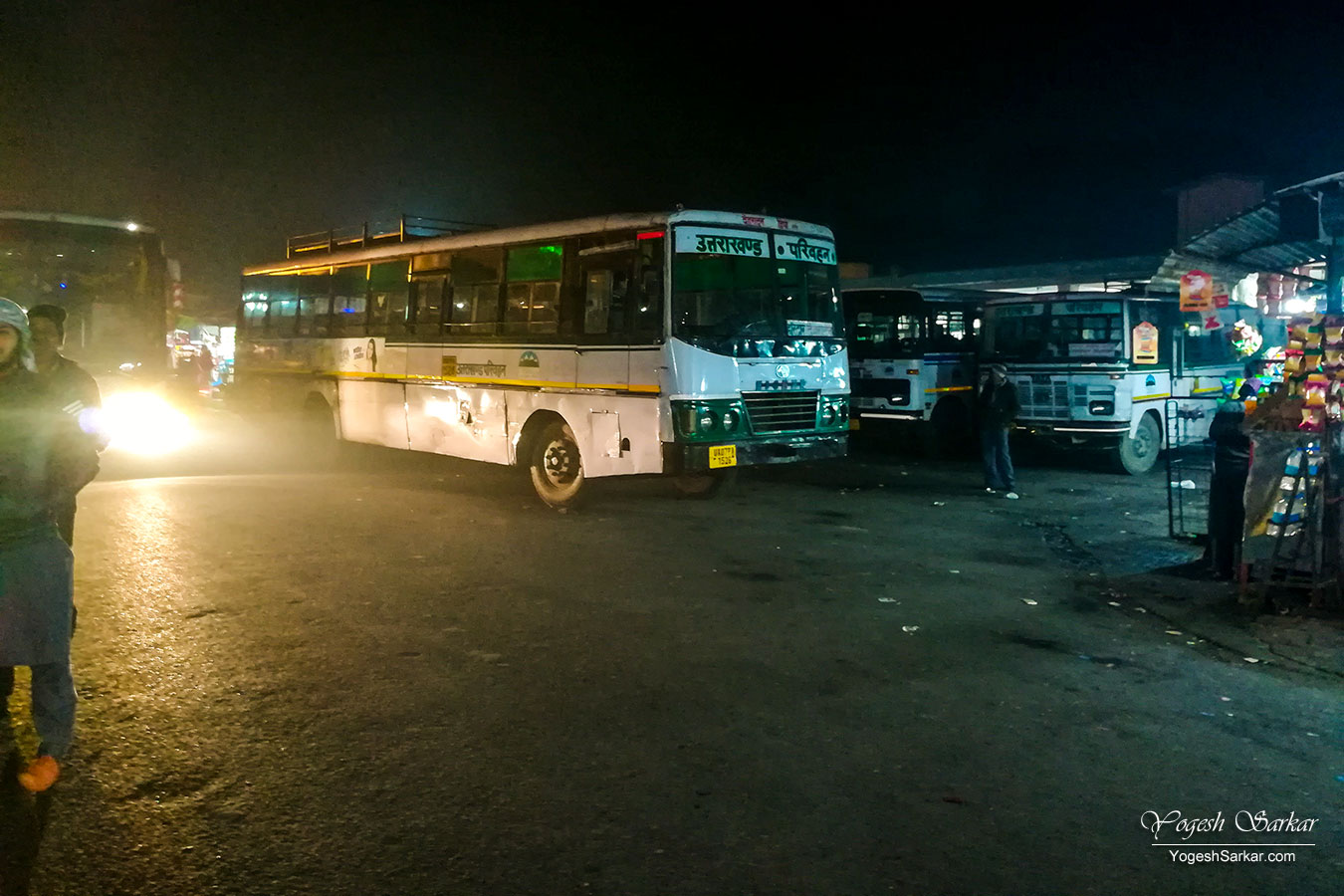 I had told everyone that I was heading to Bageshwar. I guess I had sort of told myself that as well.

However, once at the Haldwani bus stand, I was torn between boarding the bus back to Delhi or waiting for the bus to Bageshwar, which was to arrive around 2 am.

However, internally, I was torn, sort of in a conflict on what to do next.

I did, however, have the delicious parathas that Mansi’s mom gave me, and thus began my wait for my navigator to tell me, what to do next.

Waiting for events to unfold

Thank you Umesh and Anil sir.