Wandering the valleys of Kumaon

What a fantastic trip @dichkaun . What made you pick these places? Very nice photos too. How the was food throughout?

Theloststory said:
What a fantastic trip @dichkaun . What made you pick these places? Very nice photos too. How the was food throughout?
Click to expand...

Thanks.
I am not very particular on where to go. Just need a few free days and an open road.
This particular trip was inspired by the log on this same forum by Gaurav Dutt. I was in Nainital for some work and had a few days in hands. Darma valley came to mind and Gaurav had helpfully posted all the details. So off I went.
As long as one is ok eating local food and is not particular about fancy stuff, food is generally good. The food at the home stay in Dantu was very basic and very nice. But the dining room was a smoke filled kitchen. Many would not fancy it.

Super. Not everyone is gifted to take power nap like you. I could feel how pleasant it would have been to stay with the villagers. How much did they charge for food and accommodation ?!

great place to unwind..hope few home-stays do come up there as i am sure the coming season will see influx of many more

Tilak Francis said:
Super. Not everyone is gifted to take power nap like you.
Click to expand...

Thank you. Just a side effect of being lazy


Tilak Francis said:
How much did they charge for food and accommodation ?!
Click to expand...

2K for 2 days inclusive everything.


Alpha said:
humble houses in exquisite surroundings..love the carved wooden doors and windows
great place to unwind..hope few home-stays do come up there as i am sure the coming season will see influx of many more
Click to expand...

Pretty much every house in the village is a home stay. The challenge is villagers migrating. In 5-10years the place will be empty.

As usual I woke up before 0500 and snuggled in the quilt for a while. Around 0530, I dressed, packed and stepped out hoping for a clear sunrise. Things looked promising, though there were a few clouds. Ride Map for the day First rays of light on the peaks

As I stood there waiting, the first direct rays of sunlight fell on the tallest peak. This was something I had been wanting to see for long.

One by one each peaks got its share of the light. A few lingering clouds added to the effect. I was busy clicking away. First rays on all peaks Beauty under the moon The sheep who were my company on the previous day

As the sun rose higher, few of the clouds returned. Returning back to my room, I brought my luggage down and sat for tea with my hostess.

We talked about my journey back and their plans to walk to Jauljibi after a few days. They would take their belongings and all of the herd down to lower altitude for winter. It would be a 10-12 days journey. And then late spring they would come back to Dantu. Carrying my luggage down to the bike, I wondered how cold would the water be. And whether there was a chance of crossing the river without getting my feet wet.

I would soon find that out. As expected, water level was low. It was colder than I had hoped but warmer than I was prepared for. In seconds I was out, though not before getting one feet wet and water in my boot.

Initially, I looked for a sunny spot with a place to sit for taking of my shoes and drying for a while. The road was mostly in shadows. After a while I gave up, resigned to enjoying the wet feeling inside the shoe.

After about 90min of riding, I stopped for a break. Took that opportunity to take off my shoes and change socks. Rested for a while before moving on. A peak though the foliage The fork to Narayan Ashram About three and a half hour after leaving Dantu, I was at Tawaghat. The return journey from Darma Valley was much easier compared to while two days back.

I was getting hungry but decided to wait till Jauljibi for a snack break. Plan was to follow the Kali river down till Jauljibi and then drive up along with the Gowriganga river towards Munsyari. 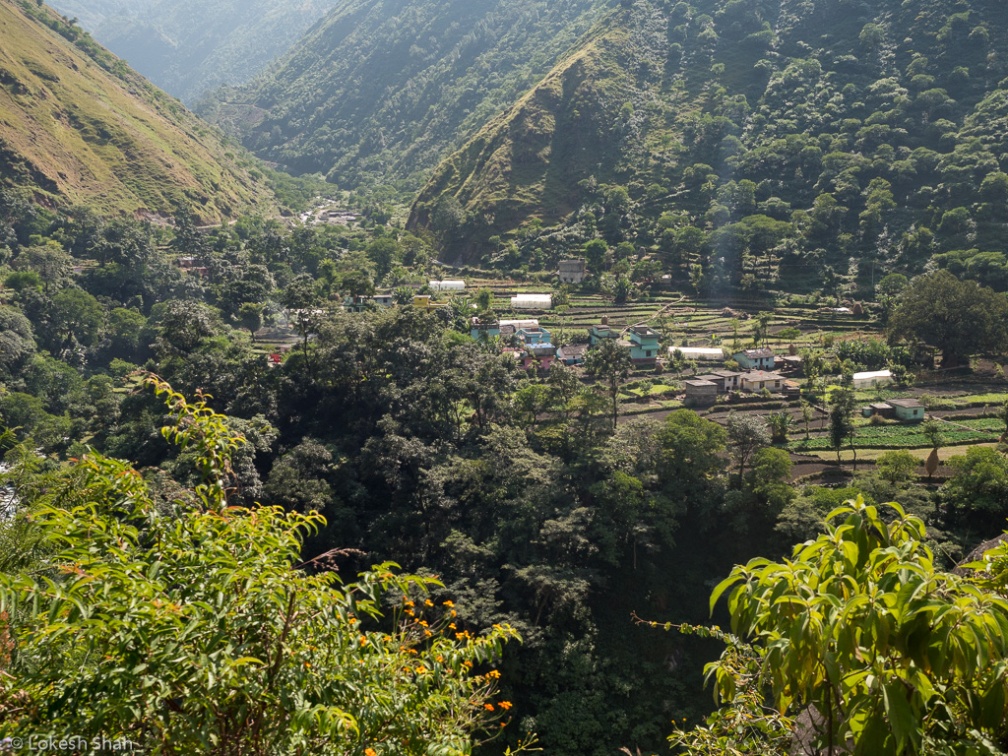 A Nepalese village on other side of Kali Road block due to hill cutting

By the time I reached Jauljibi, I was ravishing hungry. I made the mistake of not stopping in the main market. Instead I stopped at the bridge where the road turned towards Madkot.

There was no dhaba. So had tea and a packet of chips. I was expecting the road till Madkot to be though a picturesque valley snaking along the Gowriganga river. Didn’t want to have hunger pangs to prevent me from enjoying the ride. Imagine lying down under the warn sun on the parapet above and gentle flowing sound of Gowriganga river luring you into a nap. This is as blissful as it can get. The ride till Madkot was better than I expected. Beautiful valley with the river gurgling though flanked by close hills covered with trees, shrubs and wild flowers. To add to that, the road was great with little traffic. Waterfall over the road before Madkot. I had been wanting this picture for years – my first trip to Munsyari.

Beyond Madkot the road was a mess. Massive construction was going on and the hillside was being demolished to widen the road.

By the time I reached Munsyari, I was covered in dust. The town had become crowded and dirty since my last visit. Looking around for a decent room, I realized all hotels had bumped up their prices for the autumn season. Scouting around I took a room at Bilju Inn.

The sky was overcast and there was no chance of a Panchachuli sunset. Had tea and then took a bath. Later I went to the market to check things out.

Munsyari is becoming more and more touristy. Without much initiative by the local administration I can see the place suffer over the next 5-6years.

Returning back to my room, had dinner in the room itself. The dining hall had been taken over by a group of students from Allahabad. For the first time, saw Panchchulli peaks looking so beautiful at sunrise. Went to Nandadevi temple once before sunrise, but the peaks did not look so majestic.