Bekar hai Venue.
Kisi kaam ki nahi.
Itna paisa laga kar bhi dabba loge ?
Is se achha Ecosport le lo.
3 years of Ownership of Ecosport will be lot better than Venue.
Compare Venue and Ecosport both side by side.
You will get answer.
Last edited: Aug 21, 2019

Yamuna crosses danger level
NEWDELHI: Delhi government officials began preparations on Monday to move nearly 24,000 people from places close to the Yamuna as the river flowed above the danger mark and was expected to reach levels close to its all-time record – putting homes, farms and bridges at risk.
The crisis staring at the Capital began up north over the weekend when heavy monsoon rains hit the Himalayan states of Himachal Pradesh and Uttarakhand on Sunday, swelling rivers, causing buildings to collapse, and triggering landslides that claimed at least 38 lives.
With waters cascading downstream, dams such as the Hathni Kund in Haryana were opened to release water at the rate of 828,000 cusecs on Sunday evening. One cusec is equivalent to 28.317 litre per second. It was not immediately clear how long the water was released at the peak rate of over 800,000 cusecs.
“This water is likely to reach Delhi with full force by Monday evening,” said chief minister Arvind Kejriwal at a press conference on Monday, urging people in close to floodplains to evacuate.
“Over 2,100 tents have been set up for those being evacuated. I urge that those living on the floodplains and its adjoining areas shift to these temporary shelters by 7pm tonight. Food, water, electricity and toilet facilities are being provided to everyone in these camps. Delhiites
EVACUATIONS BEGIN Kejriwal asks people to leave floodplains as excess water from Haryana expected in Delhi
should know that the situation shall remain critical for the next two days as the water from Haryana takes 36-72 hours to reach Delhi,” said Kejriwal, who chaired an emergency meeting earlier.
Traffic movement on the Old Yamuna Bridge, popularly known as Loha Pul, was closed as a precaution.
Hours after the CM’s statement, the Yamuna crossed the danger-mark of 205.33 metre and officials said they expected it to reach 207m – a level last seen in 2013 when the Yamuna’s flooding swept away hundreds of homes and farmlands on the banks.
Living in Yamuna floodplains is illegal but encroachments have steadily risen over years. Kejriwal on Monday said at least 23,800 people have to be evacuated.
“The water level of the Yamuna will cross the 207m mark between 4am and 5am on Tuesday. Apart from teams of various departments, locals of the low-lying areas too have organised night vigil to warn people if the water level rises,” said an official of the flood and irrigation control department, asking not to be named.
On July 31 last year, the Yamuna had touched 206.5 metres. In 2013, it had risen to 207.32 metres.
The record for the river’s level, seen in 1978 when Delhi suffered its most serious flooding, is at 207.49 metres.
Kejriwal on Monday hit out at the Haryana administration for not coordinating on the water release. “In 2013, Haryana had released 8.06 lakh cusecs of water. This time the water they released is even more… They [Haryana administration] had not spoken to us [Delhi government] before releasing the water on Sunday,” the chief minister said.
The government also opened a helpline number 011-22421656 for people to register their concerns and complaints.
Experts saw an ecological upside to the flooding of the Yamuna. “Flooding is a natural cleansing process for a river. Delhi could face a problem only if the flood is prolonged and there are incessant rains. In such situations, stormwater drains would get flooded and it would be difficult to drain out the water,” said Manu Bhatnagar, principal director, natural heritage division, INTACH, an NGO.
“In Delhi, the river does not have a flow all through the year except for these periodic floods during the monsoon. This is the only time when the river comes alive. In the process of flowing, it recharges groundwater, which is the most important function of a river,” said Manoj Misra, environmental activist and convener of Yamuna Jiye Abhiyan (YJA). 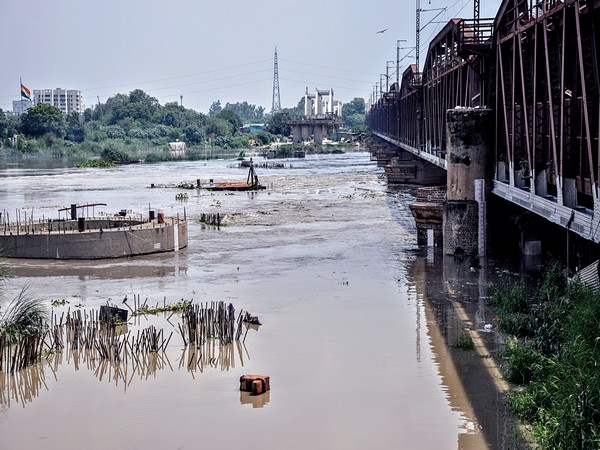 New Delhi [India], Aug 20 (ANI): Water level in the Yamuna river on Tuesday morning crossed "danger mark" as Haryana released more water from Hathni Kund barrage.
The river was flowing at 205.94 meters, 0.61 meters above the "danger mark" of 205.33 meters. The water level is expected to rise further as Haryana released 1.43 lakh cusec water on Monday evening.
The Chief Minister Arvind Kejriwal had chaired a high-level meeting of Cabinet ministers and officers of concerned departments to take stock of preparedness for any situation arising out of incoming excess water in the river.
After meeting, he urged the people living on the Yamuna floodplains and low-lying areas to move to safer places.
As a precautionary measure, vehicular movement on 'Loha Pul', an old iron bridge over the river connecting East Delhi to Old Delhi, was closed in view of the increasing water level.
The Yamuna level is expectedly going to rise to 207 metres due to the latest discharge from the barrage as the highest amount of water -- 8,28,000 cusec -- was released in the history of Hathni Kund barrage on Sunday.
The Delhi government has set up 2120 tents for 23860 people who are expected to be affected due to the excess water resulting in Yamuna's overflow. (ANI)

Over 10,000 people were evacuated from low-lying areas in Delhi as Yamuna river crossed the danger mark. An official said that the water level is expected to rise further as Haryana released 1.43 lakh cusec water. 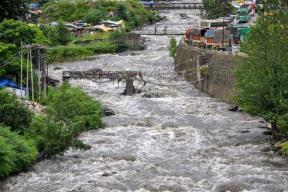 New Delhi: Rains in the northern states claimed at least 38 lives and triggered landslides that left hundreds of people in Uttarakhand and Himachal Pradesh stranded and several areas in Punjab, Haryana and Jammu flooded.
Indian Air Force helicopters carried dramatic rescue operations in Jammu and Karnal districts on Monday, and the administration was on alert in parts of Haryana and Punjab. Although the rainfall had subsided across the region on Monday, rivers in several parts of the region were in spate on Monday.

The water level rose above the danger mark in Haridwar and Delhi and the level at Bhakra dam was a foot above the permissible mark. Three more people were reported dead in Himachal Pradesh where heavy rains over the weekend have caused floods and landslides, increasing the toll to 25.
In neighbouring Uttarakhand, the toll climbed to 12 with two more bodies being recovered on Monday. Cloudbursts have wreaked havoc in a dozen villages of Uttarkashi district, washing away houses and hectares of agricultural land. A 16-year-old boy drowned in Uttar Pradesh's Etawah due to release of water from Kota Barrage into the Chambal.
The situation in parts of Punjab and Haryana remained grim, prompting the Punjab government to declare the current flood situation in the affected villages of the state a natural calamity. Chief Minister Amarinder Singh also announced Rs 100 crore for emergency relief and rehabilitation measures in affected regions.
The Kailash Mansarovar Yatra through traditional Lipulekh route was halted due to landslides on the trek route. According to Pithoragarh District Magistrate V K Jogdande, the 17th batch with 56 pilgrims was called back to the Dharchula base camp for safety reasons.
Most rivers in Uttarakhand were in spate, with the Ganga crossing the danger mark in Haridwar and flowing close to it in Rishikesh. Two bodies were recovered this evening from Makudi as search operations were intensified on Monday with the weather being clearer, Uttarkashi Disaster Management Officer Devendra Patwal said, adding five were still missing. All bodies except one have been identified, he said.
So far six bodies have been pulled from the rubble in Makudi, four from Arakot and one each from Tikochi and Sanel. Sixty head of cattle have also been killed in the cloudbursts in Mori block. Three helicopters, including one from the IAF, were pressed into service to take relief material including food packets, rations and essential medicines to people.
With the Met department predicting heavy rainfall in parts of the state on Monday, all schools and anganwadi centres in nine of 13 districts remained closed. In Himachal Pradesh, over 500 people were stranded as several roads were blocked by landslides and flash floods, officials said. The rains have so far caused damage adding up to Rs 574 crore, according to a state government spokesperson.
The incessant rainfall for the last two days damaged water pipes and hit supplies in Kangra district, another official said on Monday. Over 10,000 people were evacuated from low-lying areas in Delhi as the water level in the Yamuna river crossed the danger mark.
According to a Delhi government official, the river was flowing at 205.36 metres, just above the danger mark of 205.33 metres. The official said that the water level is expected to rise further as Haryana released 1.43 lakh cusec water at 6 pm on Monday.
The Yamuna flows through six districts of Delhi whose low-lying areas are prone to flooding. The administration has deployed 30 boats to prevent accidental drowning. A flood-like situation prevailed in many parts of Punjab and Haryana, where the IAF rescued nine people from flooded areas.
Many parts were inundated and crops in hundreds of acres were submerged as both the states continued to remain on high alert. Nearly 1,000 people, including about 700 from Rupnagar district alone who were left stranded in flood waters, were rescued in the two states, officials said.
The Army, the NDRF and state authorities were carrying out rescue operations in various areas of Punjab and Haryana, a defence release said. In Jammu, an Indian Air Force (IAF) helicopter rescued four fishermen who were stuck in swollen waters of the Tawi river, officials said.
They were stranded on a concrete platform at the bottom of a pillar of an under-construction structure to create a lake at Baghwati Nagar, they said. The air force was called after state disaster response force and police personnel failed to reach the fishermen, the officials said.
Several rivers including the Ganga, Yamuna and Ghaghra were in spate in Uttar Pradesh due to heavy rains in neighbouring states, leading to floods in low-lying areas that left one person dead. Light to heavy rains also lashed parts of Rajasthan since Sunday. Due to rains, 6,000 cusecs of water was released from the Bisalpur dam in Tonk on Monday as it reached its capacity of 315.05 metres.

Old Yamuna Bridge closed for vehicles after the water level of the river crossed the danger mark. 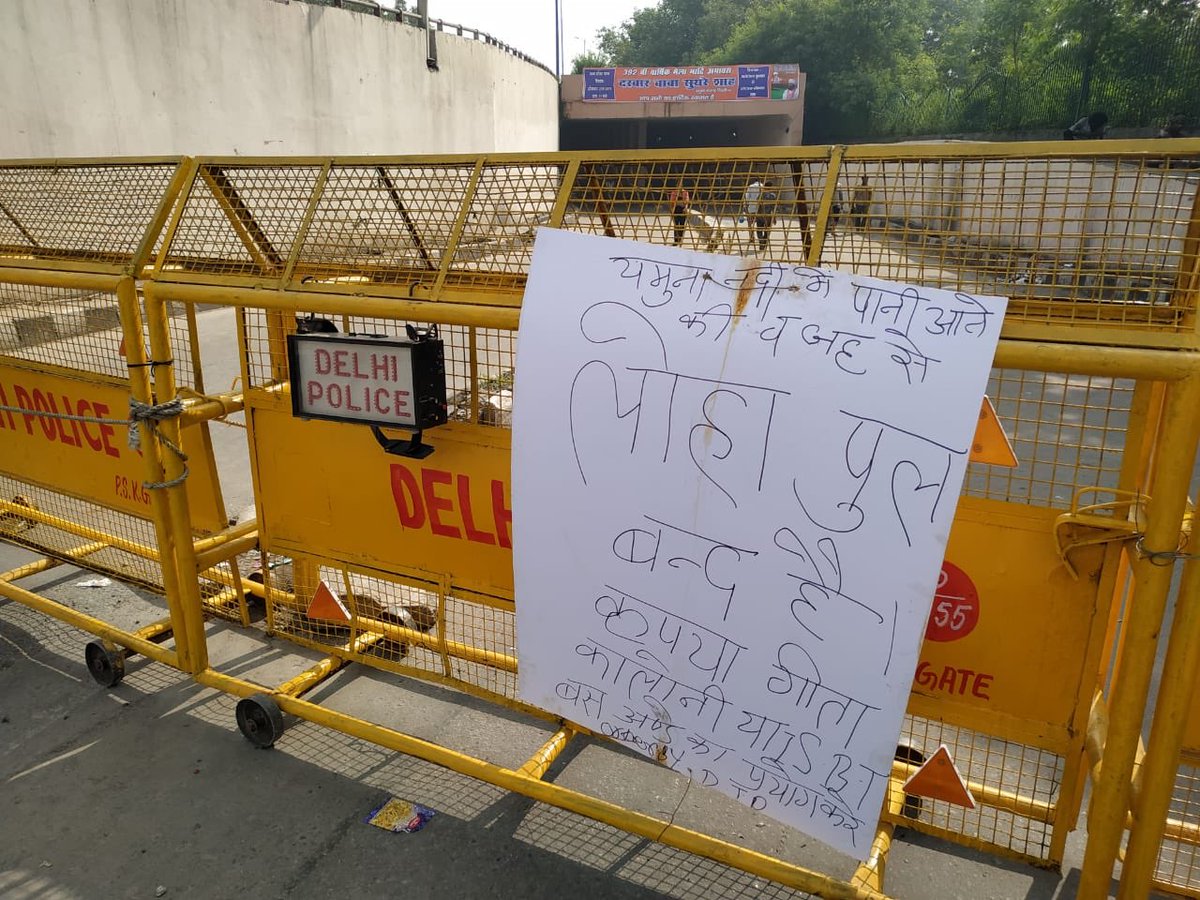 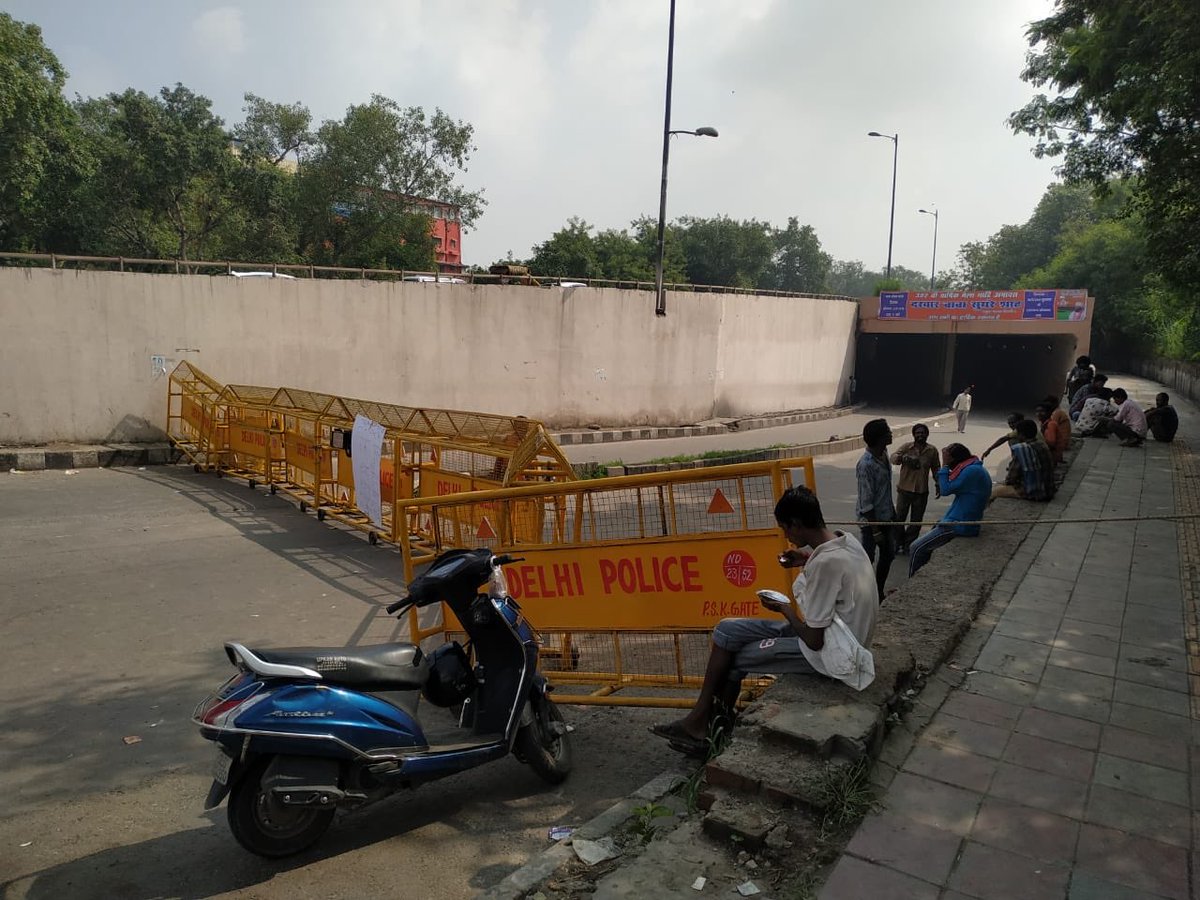 
SUBSCRIBE 385K
New Delhi, Aug 19 (ANI): The water level of Yamuna River on Monday morning was flowing at 204.70 meters, higher than the warning mark at 204.50 meters, after the release of huge amount of water from Hathni Kund barrage in Haryana. The “danger mark” is 205.33 meters. The Delhi government has issued order from the evacuation of people from low-lying areas and civil volunteers have been deployed for rescue operations. -

adsatinder said:
“In Delhi, the river does not have a flow all through the year except for these periodic floods during the monsoon. This is the only time when the river comes alive. In the process of flowing, it recharges groundwater, which is the most important function of a river,” said Manoj Misra, environmental activist and convener of Yamuna Jiye Abhiyan (YJA).
Click to expand...