In this video captured by NASA’s Perseverance rover, the agency's Ingenuity Mars Helicopter took the first powered, controlled flight on another planet on April 19, 2021.
The rover was parked at “Van Zyl Overlook,” about 211 feet (64.3 meters) away in Mars' Jezero Crater and chronicled the flight operations with its cameras.

These images from the rover’s Mastcam-Z cameras show the helicopter hovering above the Red Planet's surface. During this first flight, the helicopter climbed to an altitude of 10 feet (3 meters), hovered, and then touched back down on the surface of Mars.

Ingenuity is a technology demonstration. The 4-pound (1.8-kilogram) rotorcraft will help determine whether future explorations on Mars could include an aerial perspective.

Perseverance touched down at "Octavia E. Butler Landing" with Ingenuity attached to its belly on Feb. 18, 2021. The helicopter was deployed to the surface on April 3.

Watch: YouTuber Drives A New Taycan Turbo S Off The Dealership Floor Into A Glass Window
By mixing up the pedals, the vlogger crashed a $212,000 Porsche.

The Porsche Taycan Turbo S is quick enough to beat a Tesla Model S Performance with Cheetah Stance on a quarter mile. It's also fast enough to break the production EV lap record at Road Atlanta. In Russia, a Taycan Turbo S broke not a record, but rather a dealership's glass windows by a famous vlogger.

What Happened Before Going Into The Porsche Dealership

This seemingly shocking video was created and uploaded by Mikhail Litvin, a celebrity vlogger with 6.05 million subscribers on YouTube and 12.3 million followers on Instagram (@mikhail_litvin). With that many subscribers and followers, it's hard not to imagine that Mikhail makes a lot of money from creating and publishing content on social media sites.

The video starts with Mikhail talking to famous Russian leaders Joseph Stalin, Vladimir Lenin, and Vladimir Putin (all played by actors). Letting YouTube's English-translated subtitles do the trick, we knew that the Russian leaders were giving some advice to Mikhail to live his life as his heart says, not minding what others say.

Crashing A $212,000 Taycan Turbo S Over Glass Windows
Via Mikhail Litvin on YouTube 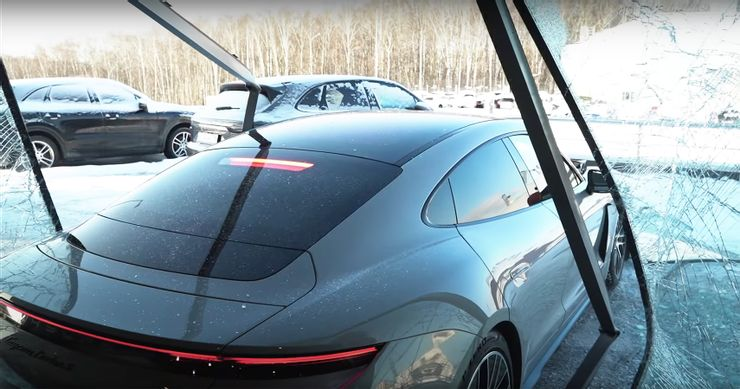 Then Mikhail enters a Porsche dealership and started looking around, taking a look at every sports car on display. Then, a Porsche Taycan Turbo S catches the vlogger's attention, which costs around $212,000. Although the price was about $36,000 higher than the base price, let's not forget that prices vary in different markets. 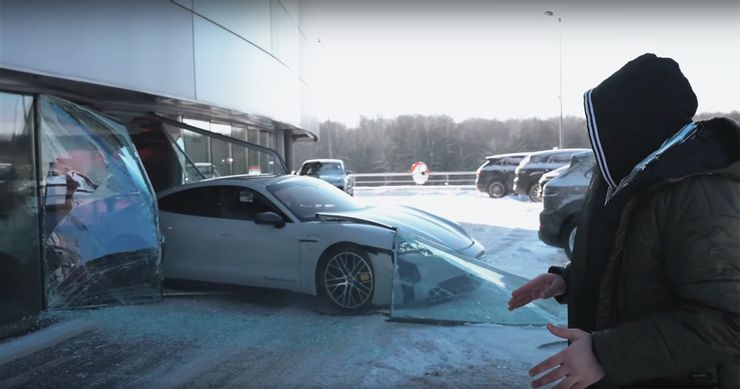 All that transpired may have been part of an elaborate stunt. Backed by a deal with the dealership, Mikhail might have already bought the Porsche Taycan Turbo S before the crash. The Porsche may have taken some damage and the window glasses were totaled, but the YouTube video is already reaching 3.4 million views as of this writing.

Interestingly, months prior, Mikhail did another stunt by setting his Mercedes-AMG GT 63 S on fire. It gained more than 21.6 million views. With his crazy stunts, Mikhail would be a good match with WhistlinDiesel of the United States.

Watch: YouTuber Drives A New Taycan Turbo S Off The Dealership Floor Into A Glass Window

Researchers look for solutions to drivers' common but dangerous mistake.

Drivers use the brake almost a million times per year, usually with no problem. But each year, approximately 16,000 preventable crashes occur due to pedal error when drivers mistake the accelerator for the brake. Pedal error crashes can present serious safety risks to the vehicle occupants, surrounding motorists, pedestrians, and property.

This video is about how we can prevent the pedal misapplication, sometime happens with new drivers in panic situation. they press accelerator pedal instead of brake which cause sudden unintended acceleration. and here is solution how you can prevent it

Namaste Doston ! Bahut log puch rahe the how to drive in bumper to bumper traffic. Is tarah ke traffic me New drivers ko bahut problem hoti hai. driving in traffic is easy once you get a hang of it. Watch the full video.