darkside_of_d_sun said:
How to find the SWIFT code for my home branch of my bank?
Click to expand...

Ask customer care of your bank.
They can guide better.
Email head office if it is a private bank they will answer it.
Or ask on Twitter in pm

While going up to the peak, the last one and half hours were really hard for me because I felt severe headache, most likely because of slightly low oxygen level near the peak. Other than this, the hike was "moderately easy". There are a couple of sources of water, so just take one bottle with you when start the hike. However, the water sources are before the place called "tisri" and the hike after tisri is the hardest part. So before you cross tisri make sure you keep a water bottle full.

Total distance is about 16 to 18KM depending on where you start the trek. I did the trek on a single day, so back and forth around 32KM. I saw a few groups who did spend a night on the way and did the trek in two days.

I loved the trek and would definitely do it again in summer when the trek will be more green!

Finally, I would undoubtedly suggest you to hire a guide for the trek, especially if you are doing the trek in winter because in winter, the trek is mostly empty, and you will be all alone, so getting in some danger is more probable. Best of luck.


From Wikipedia [[Churdhar Sanctuary is located in Sirmaur district of the Indian state of Himachal Pradesh. The total covered area of this sanctuary is 56.16 square kilometres as notified on 15 November 1985. Fauna includes Himalayan black bear, Barking deer, Musk deer, Langur and Leopards. The work of administration at Churdhar is taken care by Chureshwar Sewa Samiti.

The sanctuary is named after Churdhar Peak. Churdhar (elevation of 3,647 metres; 11,965 feet) is the highest peak in Sirmour district and is also the highest peak in the outer Himalayas. The peak has a great religious significance for the people of Sirmour, Shimla, Chaupal and Solan of Himachal Pradesh and Dehradun of Uttrakhand. Churdhar is a holy place related with Shri Shirgul Maharaj (Chureshwar Maharaj), a deity widely worshipped in Sirmour and Chaupal. The main routes for arrival are from Nohradhar to 18 Km, (Sirmour)and Sarahan, Chaupal of 8 km.[1]

The Churdhar Peak is mentioned in the book, The Great Arc, by John Keay but is referred to as The Chur. It is from this peak that George Everest made many astronomical readings and sightings of the Himalaya mountains around 1834. He was the Surveyor General of India and did the initial survey of the full length of India as well as some very accurate measurements of the earth's curvature.]]

3 Shimla lads cycle to Churdhar Peak
SHIMLA: Three cyclists from Shimla have scripted history by making it to the Churdhar Peak (3,700 m), the highest mountain of the Shivalik range. 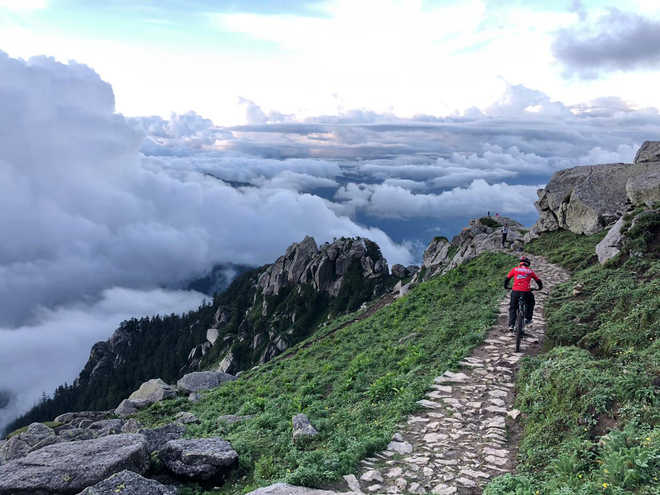 Tribune News Service
Shimla, August 1
Three cyclists from Shimla have scripted history by making it to the Churdhar Peak (3,700 m), the highest mountain of the Shivalik range.
The three lads representing the Hero Action team rode from Shimla to Churdhar and back to Sarain in Chopal over a span of two days.
The team included two-time national champion Akshit Gaur (19), national bronze medallist Ashish Sherpa (18) and team manager Ashish Sood (33).
"It is for the first time that a team of cycle riders has reached the top of the holy mountain," claimed Ashish Sood.
The route that the team followed was Shimla-Kufri-Fagu-Cheog-Neri bridhge-Pulbahal-Lihat-Madhan -Churdhar and back from Churdhar-Madhan-Sarain-Chopal.
“If we can cycle to Churdhar, we can definitely use cycling as a mode of transport in Shimla, which will ease traffic chaos and address the issue of restricted and sealed roads in the town," he said.
“It was a dream ride. The trails are extremely technical and require a lot of training to ride," the riders said.

The route
The route the team followed was

The team
The hero action team is India’s first only professional
Mountain biking team that was formulated in 2014 .sponsored by hero cycles. The team is managed by HASTPA and has brought many laurels to the country and state in the past years under the supervision of HASTPA

“It was a dream come true - this is the hardest challenge we have undertaken - riding over the treacherous trails of Churdhar wasn’t easy. You have to be very careful as one mistake can turn fatal - the trails are extremely technical and require a lot of training to ride on such surfaces - I am extremely happy for the team that they did it and they did it style. These are some really talented riders and they have shown once again. Another thing is the bikes that we ride - octane from hero Cycles are really good and we could only do it because of the quality of the bikes. Himachal is full of such natural features to ride on and we are extremely sure if developed these will be the best trails in the world “ - said Ashish Sood the team manager and also one of the three members who attempted this.