This is my first blog on BCMTouring. I have been following BCMT since 2009. It gave me the confidence to plan my first motorbike trip.
I want to share my experience which may open winter cycling season in Ladakh for a bit of an extreme adventure but is doable….

This blog is about my Solo, self-supported , Winter Inner Ladakh Cycling trip of 450KM ,6 days with temperature down to -25C without windchill and 8000mts of accumulative ascent. Probably this is first time attempted ???

----------------------------
My love for Ladhak bloomed in the summer of 2009, and it has only grown stronger with every visit. First time; always in style…….. so the trip was on a motorbike - 10days - from Ludhiana-Manali-Leh-Pangong –Nubra –Leh-Manali-Ludhiana. 10 days flew by, which felt like hours, I just could not get enough. I was so deep in love that I decided to experience it all over again, and this time, in slow motion. It took me two years to go back in 2011, on cycle for another 10 days to cover Manali-Leh-KhardungLa. Since then I am making an yearly pilgrimage to Ladhak.

All these years, I had seen Ladhak in summers, across June to September. I always wondered what it will be like in winters. Some thought I was brave, some thought I was stupid, but I was just in love. And what is love if it doesn’t make you go crazy.

In December 2018 Xmas, I visited Ladhak, to completely absorb the beauty of the place, I decided to do this on cycle solo, self-supported. My route was Leh-Shakti-ChangLa- Durbuk- PangongLake , Phobrang-Shyok-Khalsar-Diskit-KhardungLA -Leh total of 457KM in 6 days. Those who knew me, knew that I was just being me.
It was an extreme experience of cold, solidarity and Adrenaline. 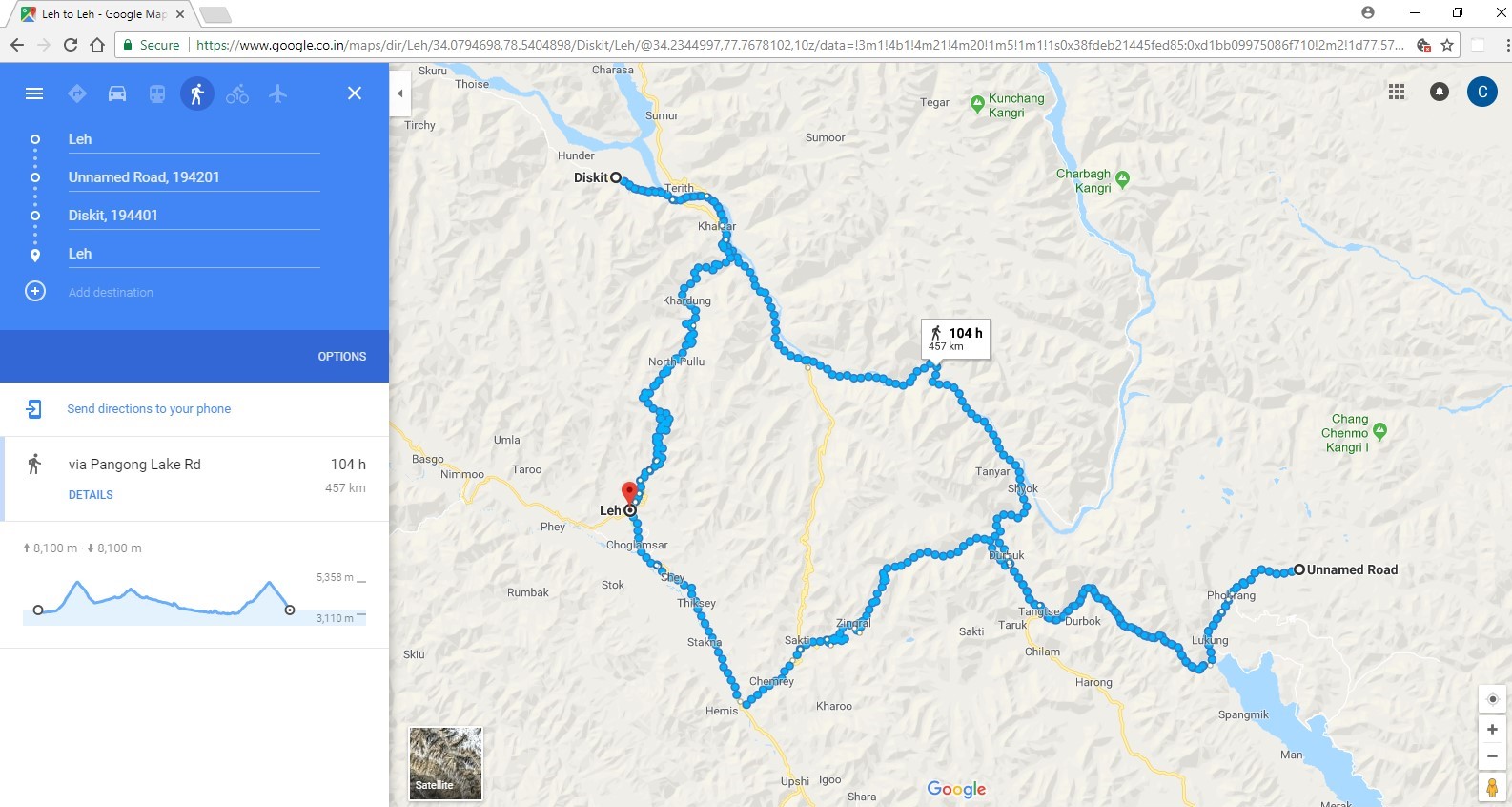 DAY ZERO : On 20th Dec. took early morning flight from Delhi to Leh, flying over beautiful snow covered peaks and landscape, from smog to green , Green to White and the brown… looking over Rohtag, Moore Plains and frozen Tso Kar.

I landed in Leh at -12C with fresh air and made myself comfortable in a very friendly guest house. I loved the innovative ideas of keeping the house warm. But then I didn’t want to get too comfortable J…..

After breakfast, I had to collect my permit from the DC office , so decided to walk from my guest house to DC office ( totally 5KM). Route was through the famous and happening Changspa Road, but this time of the year , not a soul there , no locals, tourists, all shops closed. That was first realization that it was not going to be that easy as I thought J…. Second realization was at the permit office. The Permit officer was surprised on my request for inner-line permit during this time of the year. When I told the officer that mode of transport is cycle , He suggested to rethink about this trip with a concern and suggested to do in summer. I understood his concern and thanked him. He said that it was a first; in winter that he is (probably) issuing permit for cycle for that specific route. That was exciting to hear but scary too…

Finally all set for exciting Journey in the oblivious 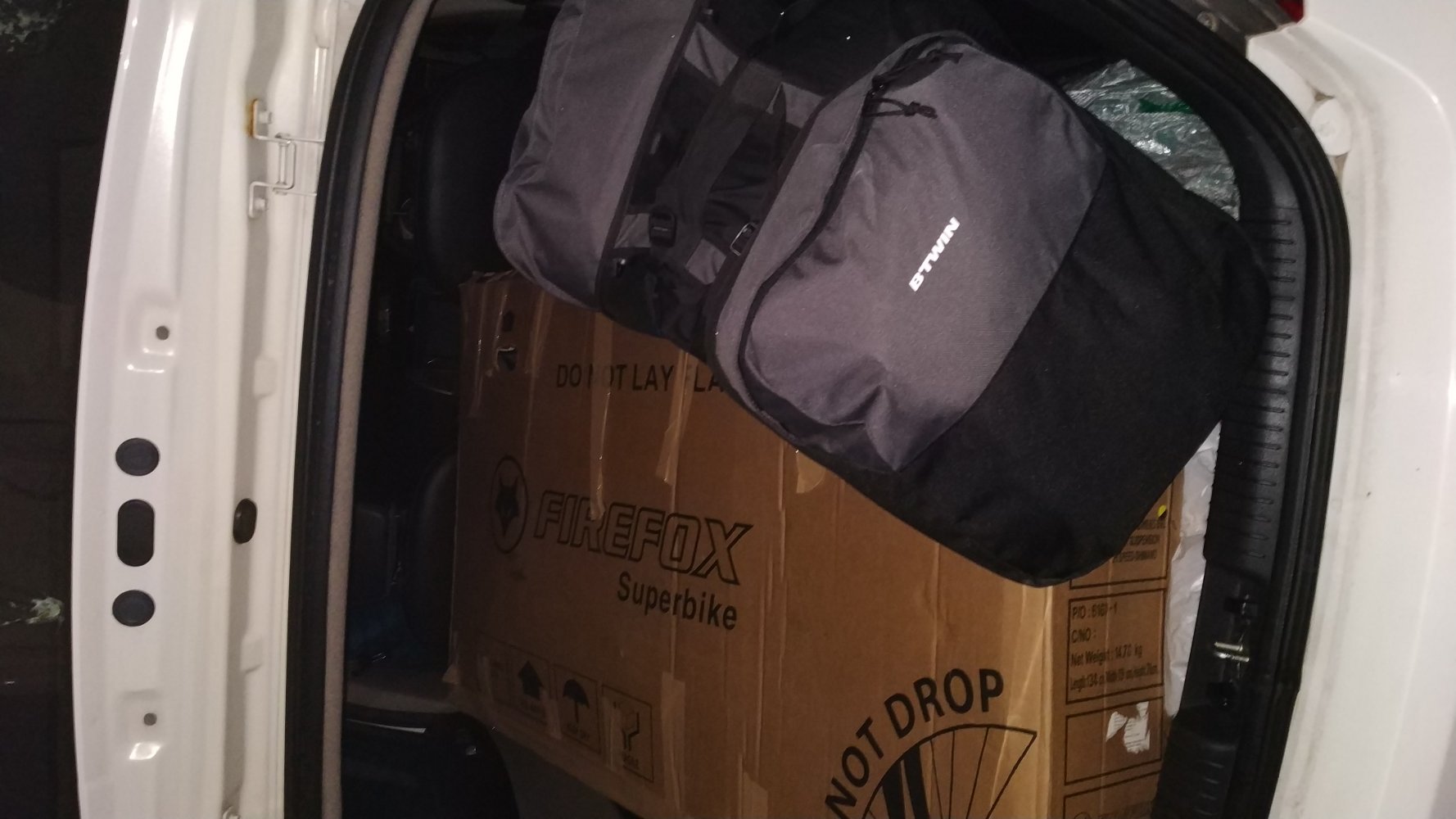 Packed for the Airport 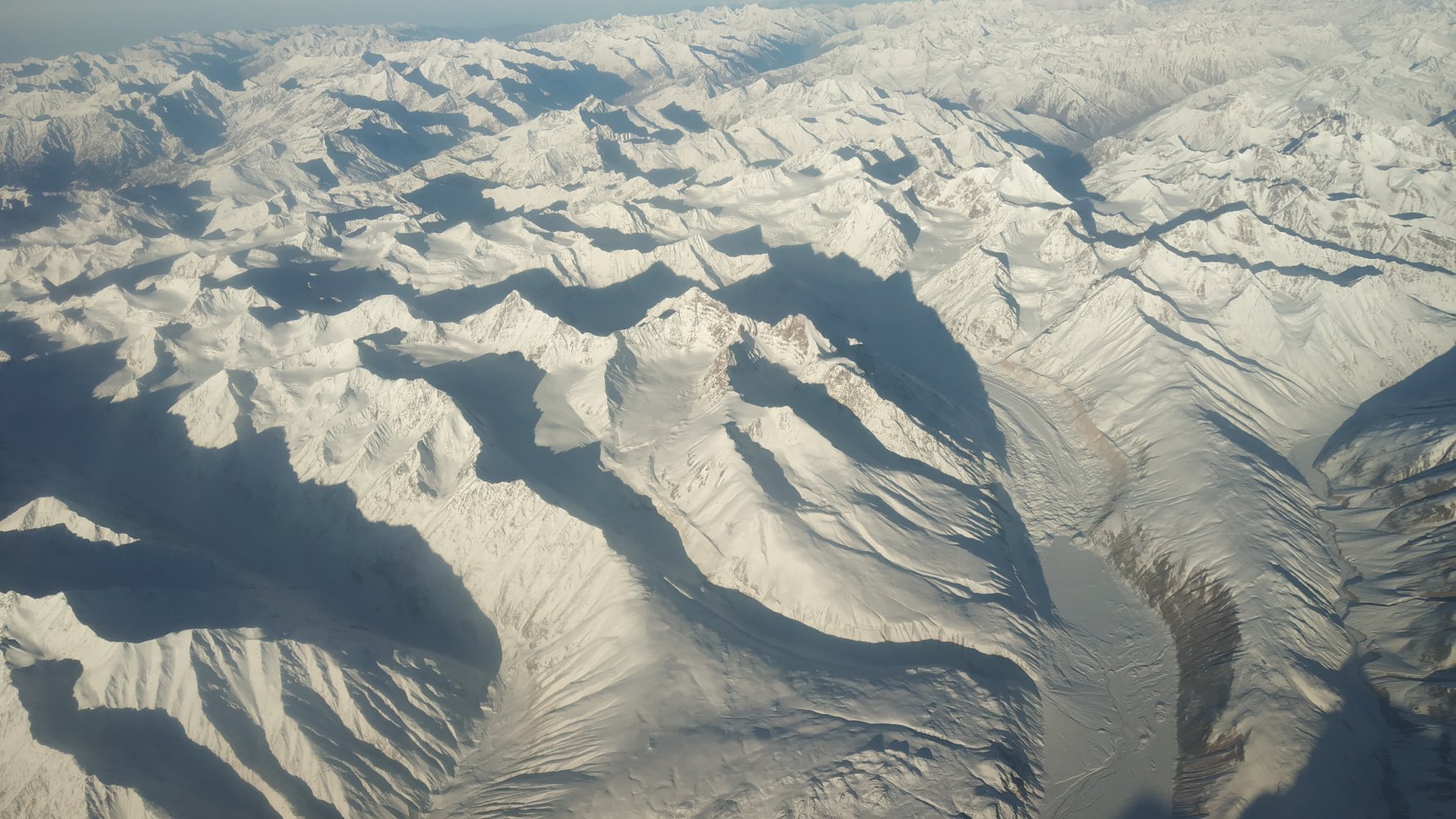 Beautiful View of Mulkila from 35000 feet 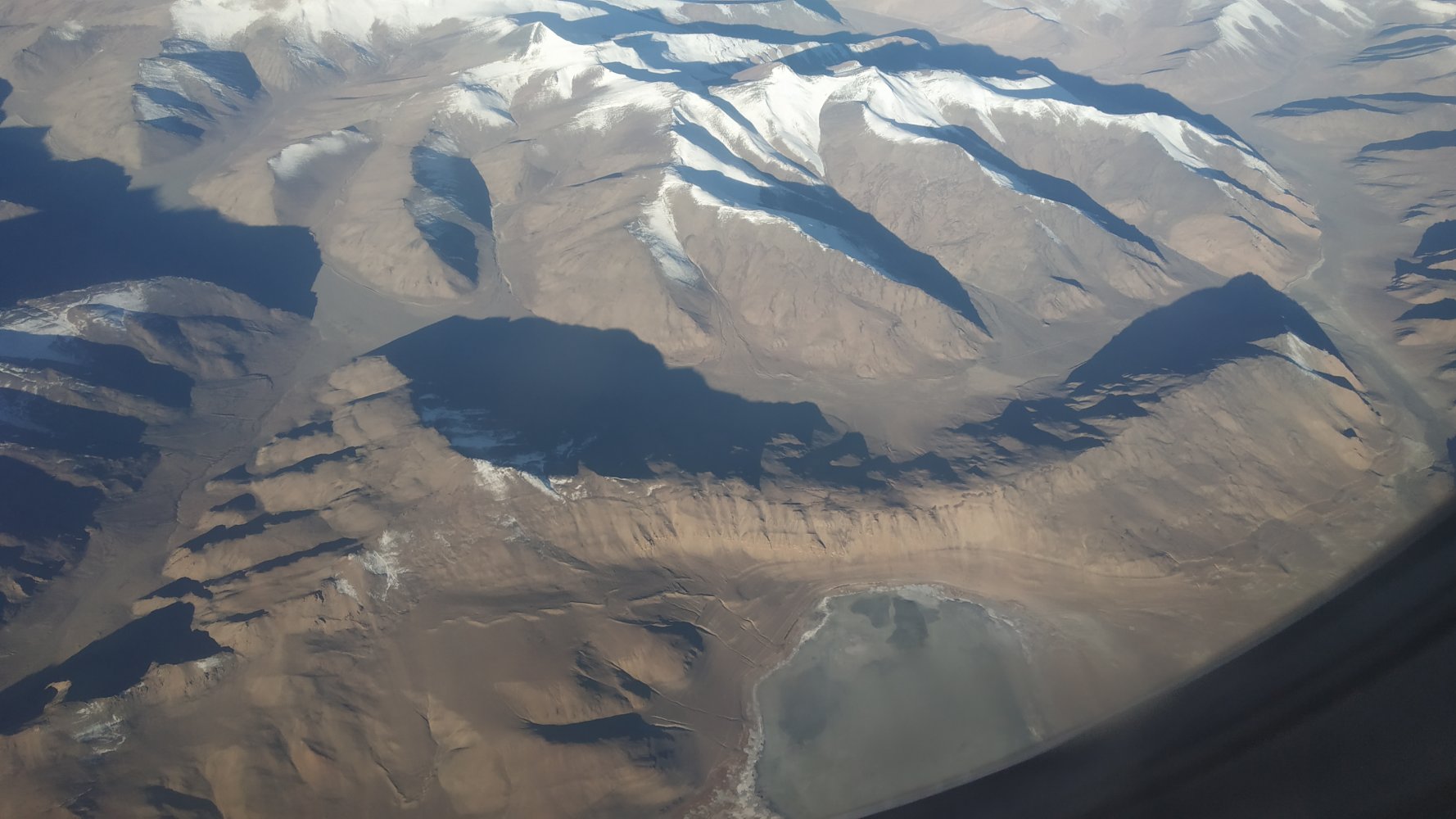 View of Frozen Tso Kar and Moore Plains on right 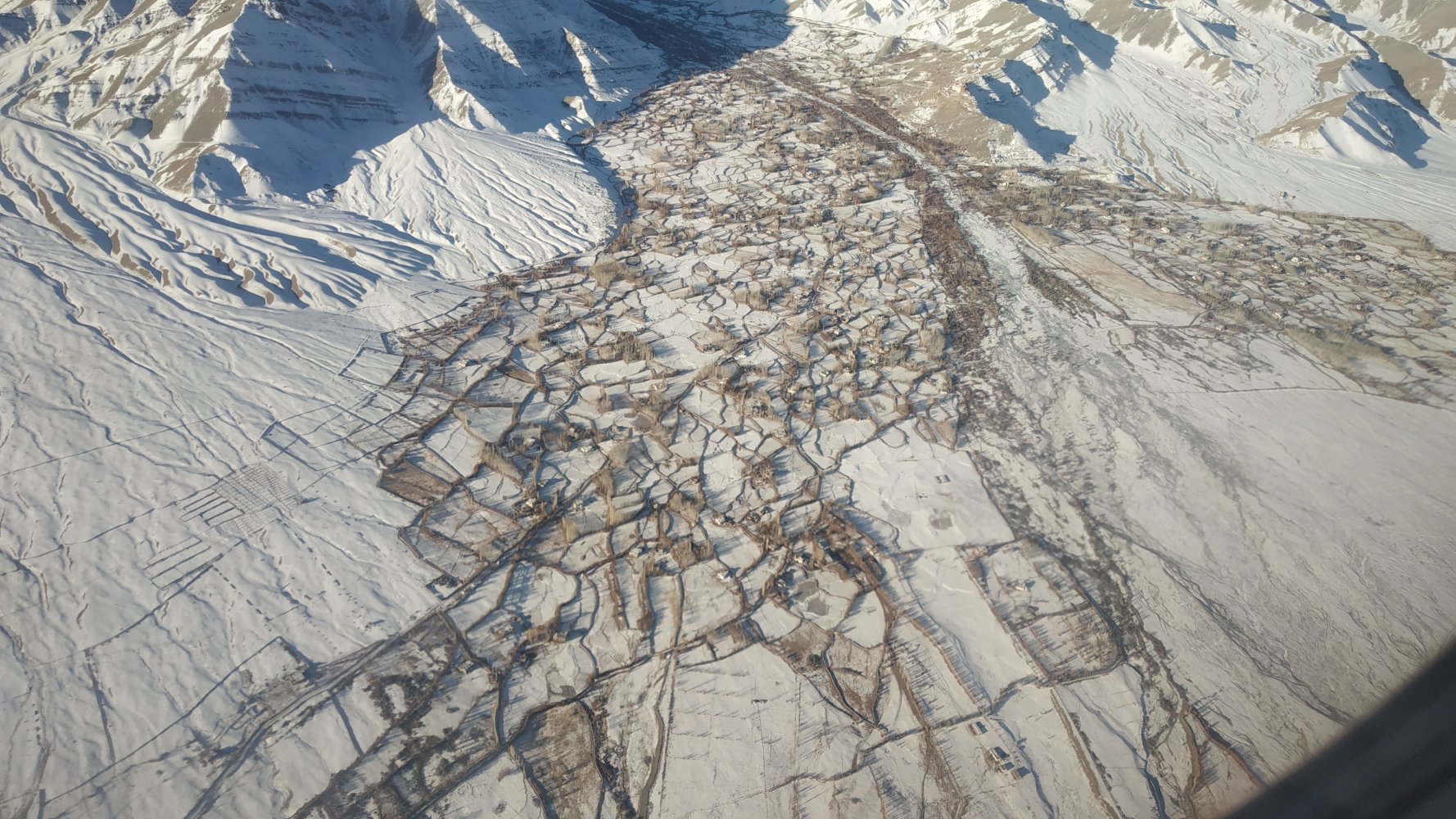 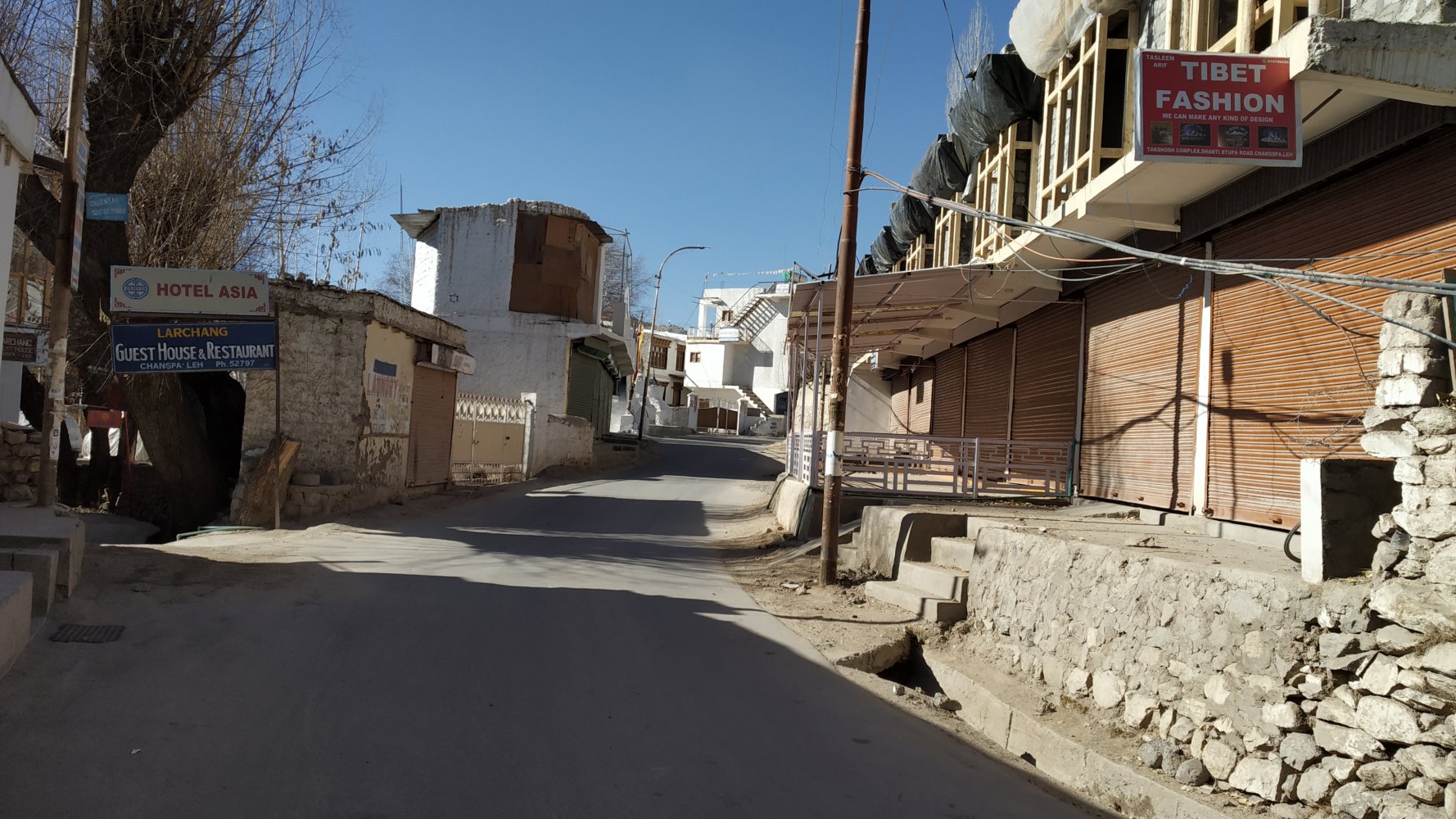 Empty Streets of Leh. During July-August ,these streets are happening with open air cafe with delicious food and crowded. 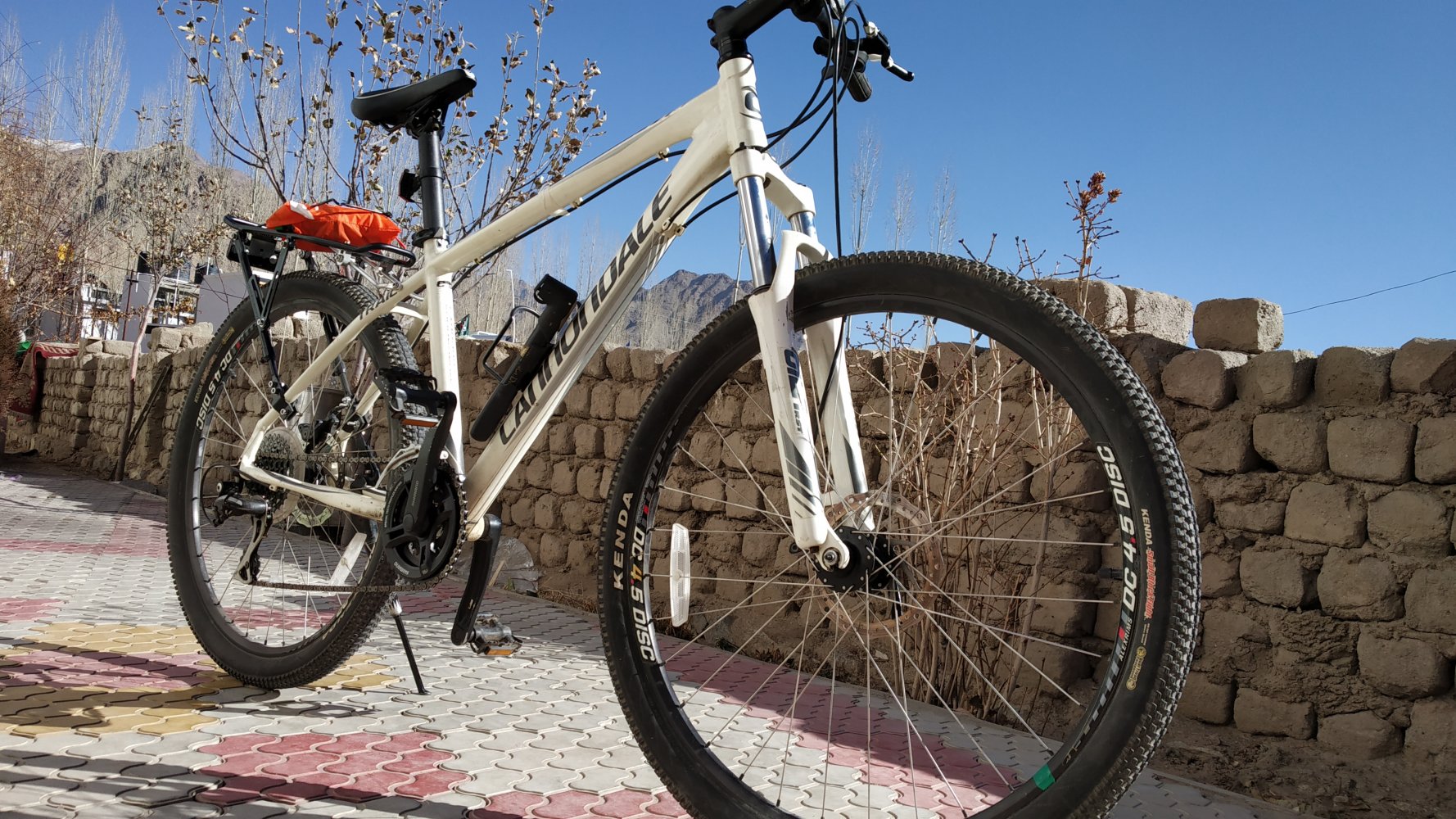 
DAY1: , Leh to Sakti (50KM), was a good start with reasonable distance with 700meters of altitude gain. It was a beautiful sunny day with max temp -3C to min -12C. Leh to Karu ~ 35 was a smooth ride along Indus river, which had just started to freeze, offering breathtaking view. From Karu to Sakti was continuous climb with unmatchable views of WariLa and Monasteries along the way. The day was only 6 hrs long. (9am-3pm) with Lunch at Karu. I had an opportunity to stay with a family in Sakti. They not only offered me home made food but also gave me a place to sleep, a very warm place to sleep. Most of the places I stayed were kept warm without support without of electricity. Though I was looking ahead at one of the tough days of my trip, I slept like a log. 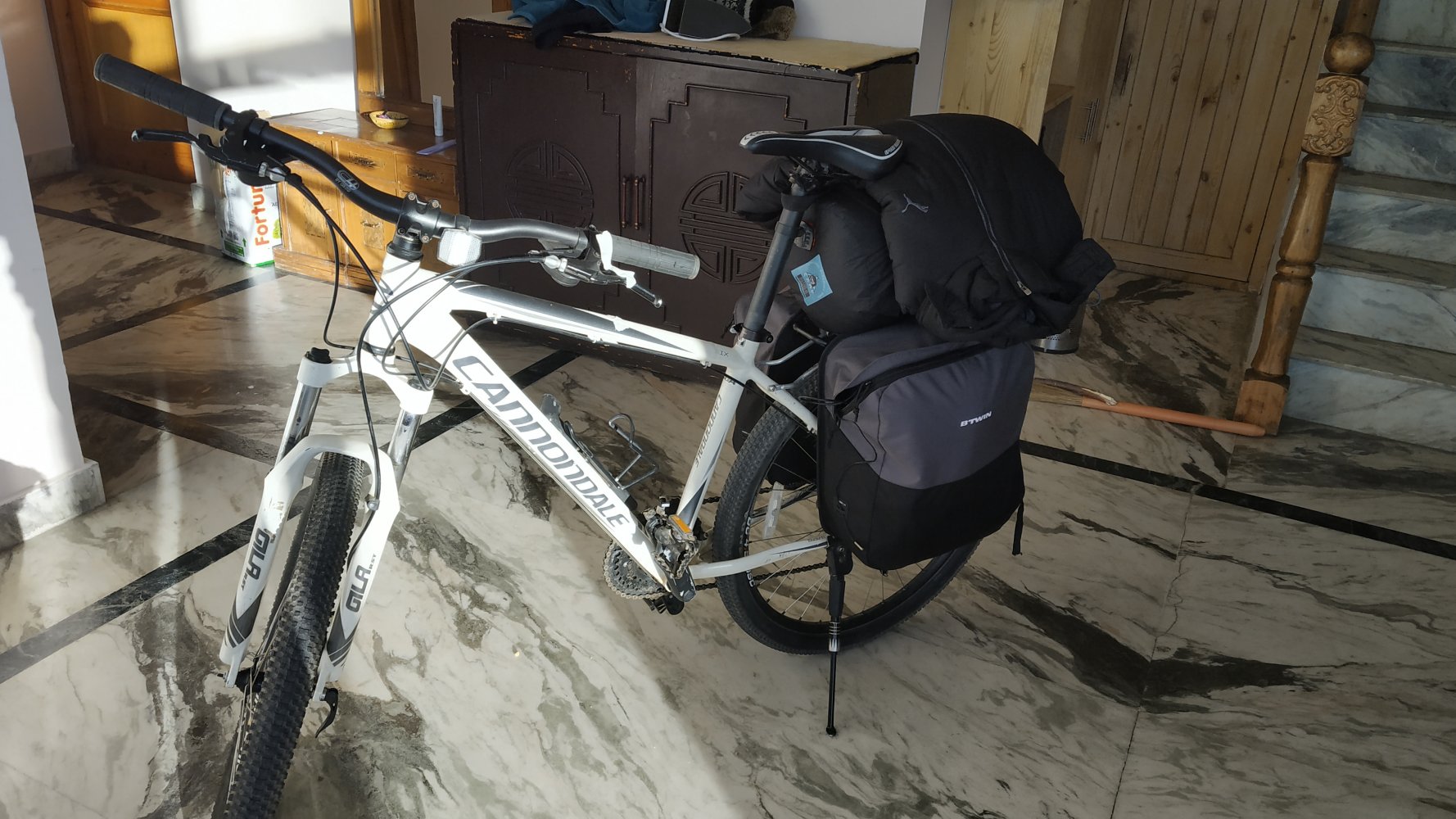 All packed and ready 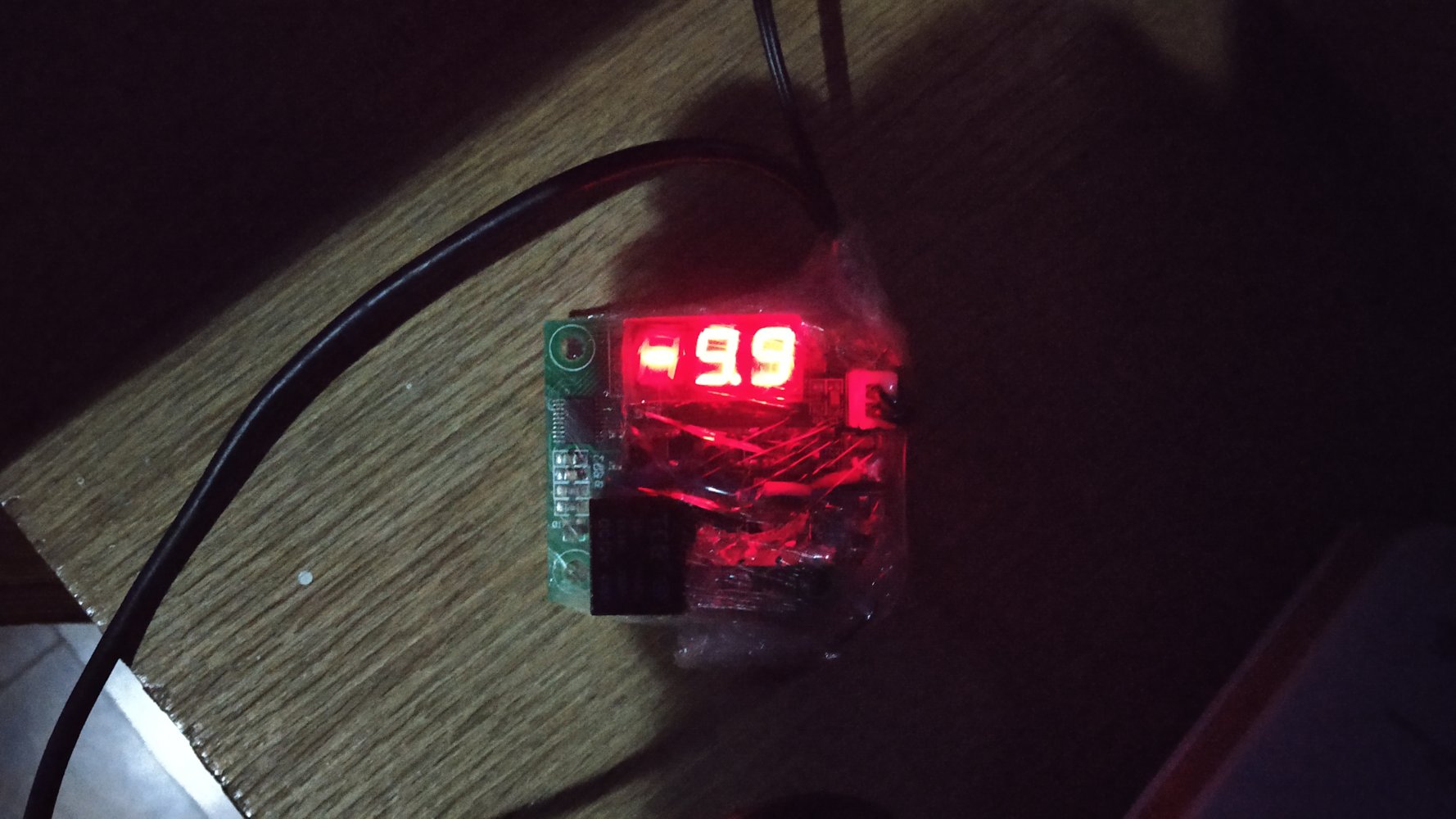 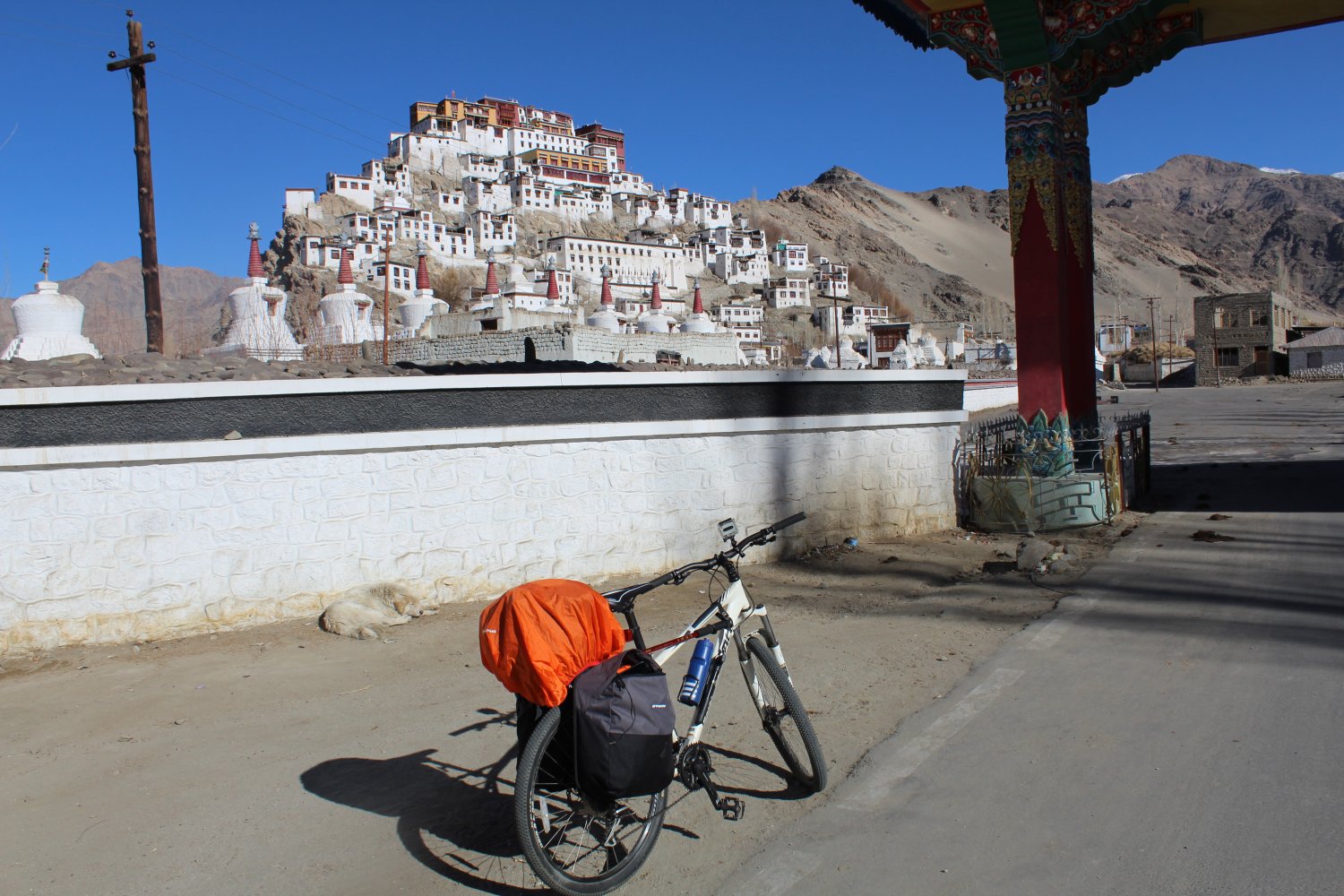 On the way ..... A break at Beautiful Thiksay Monastry 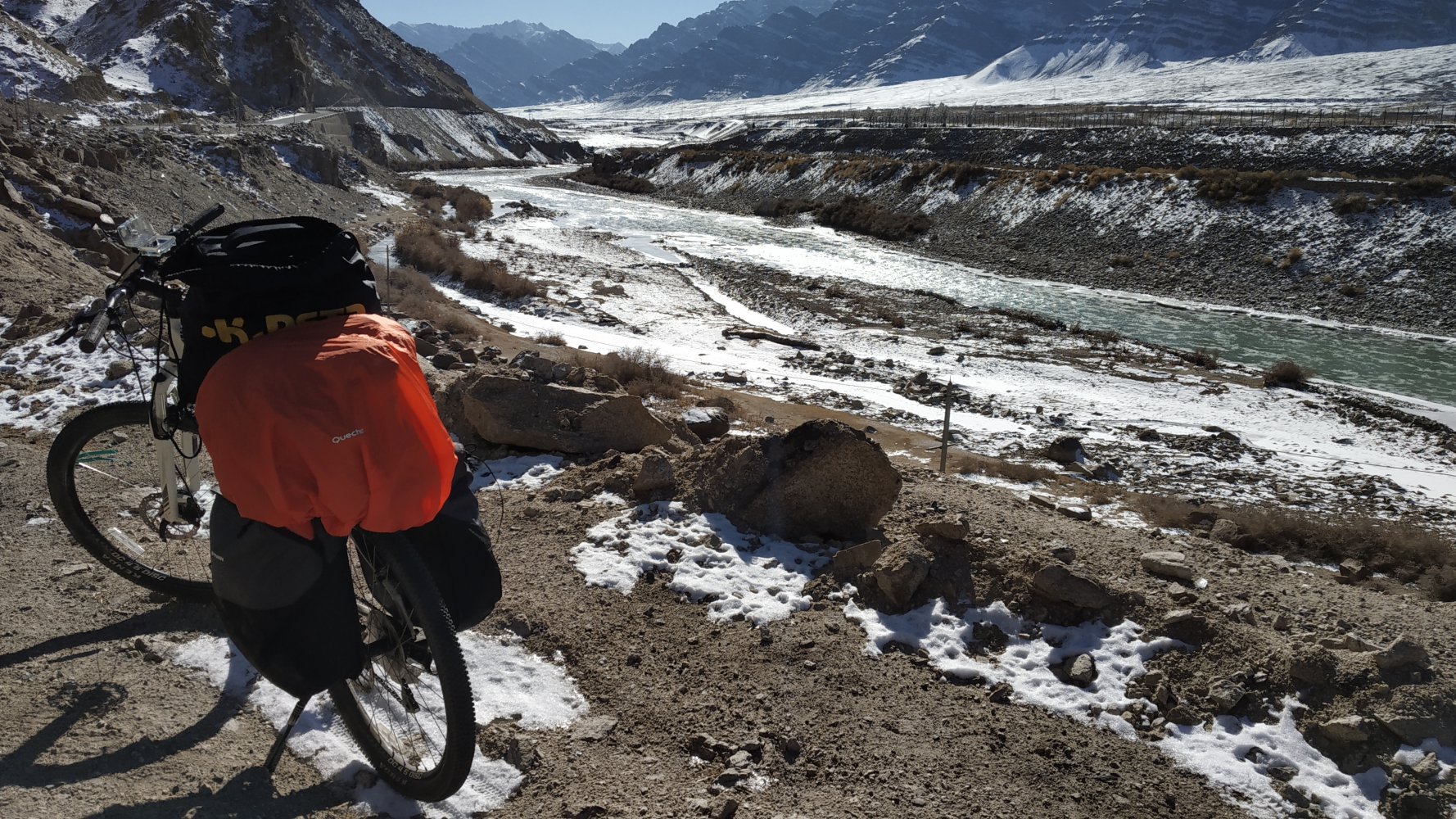 Along Indus river , It starts to freeze. Hemis on right side 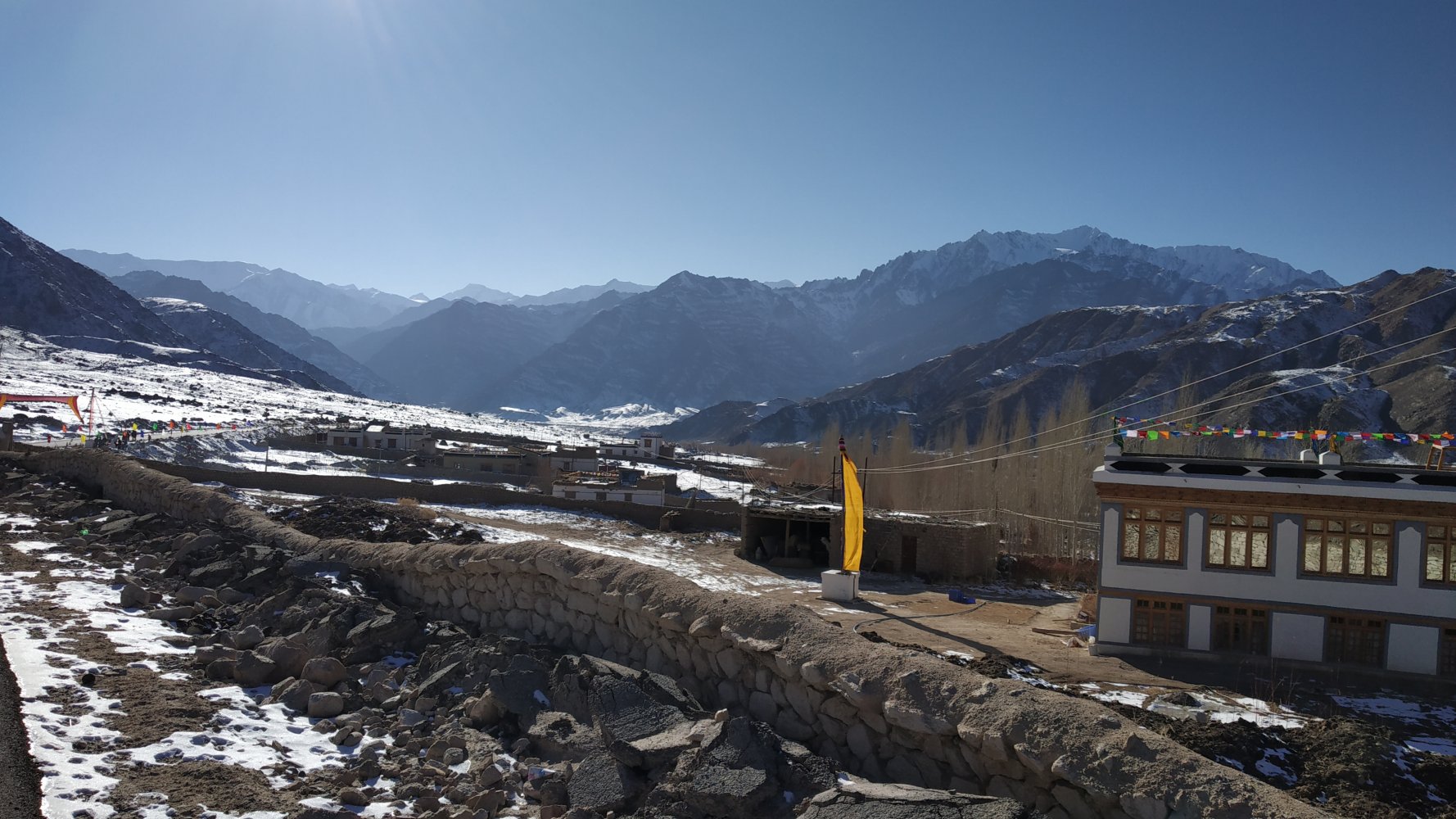 Going up towards Sakti. Looking back at steep incline but steeper to come... 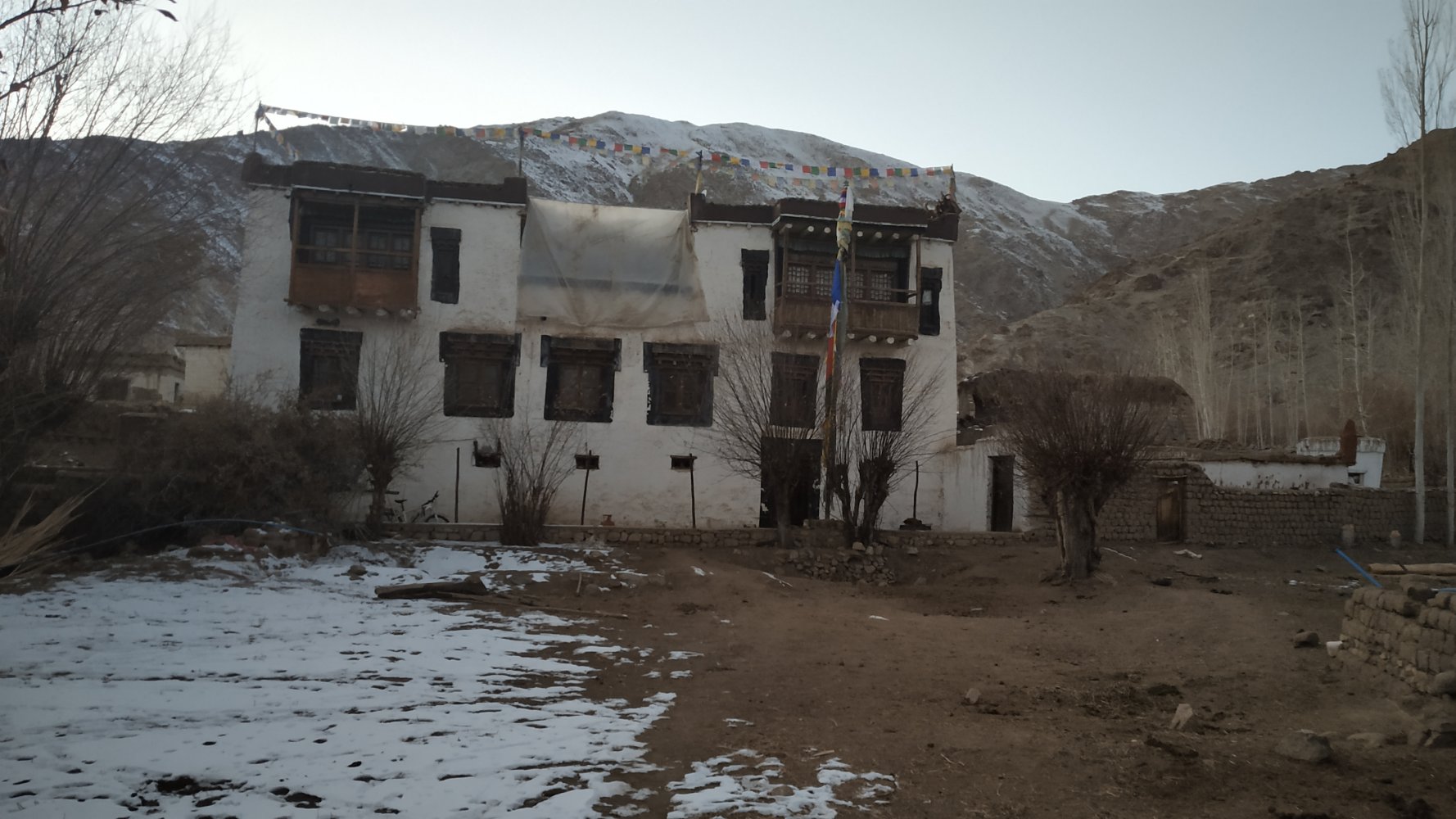 My Night Stay at Sakti. Thanks to my host to make special effort to open this place exclusive to me. 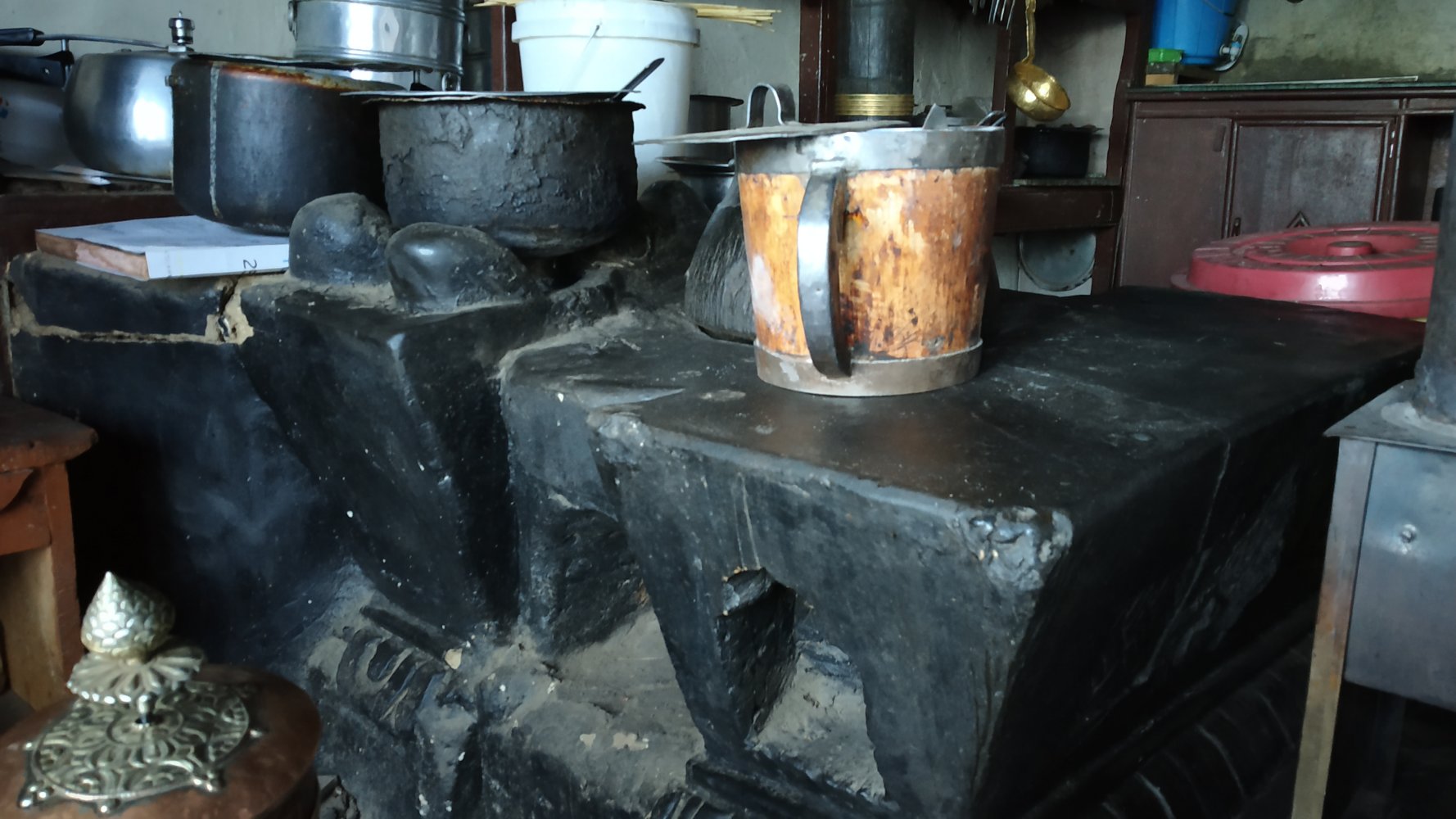 Impressive Ladakhi kitchen. A warm place after being in sub zero temperature. Had delicious food here , long chats with host and locals. 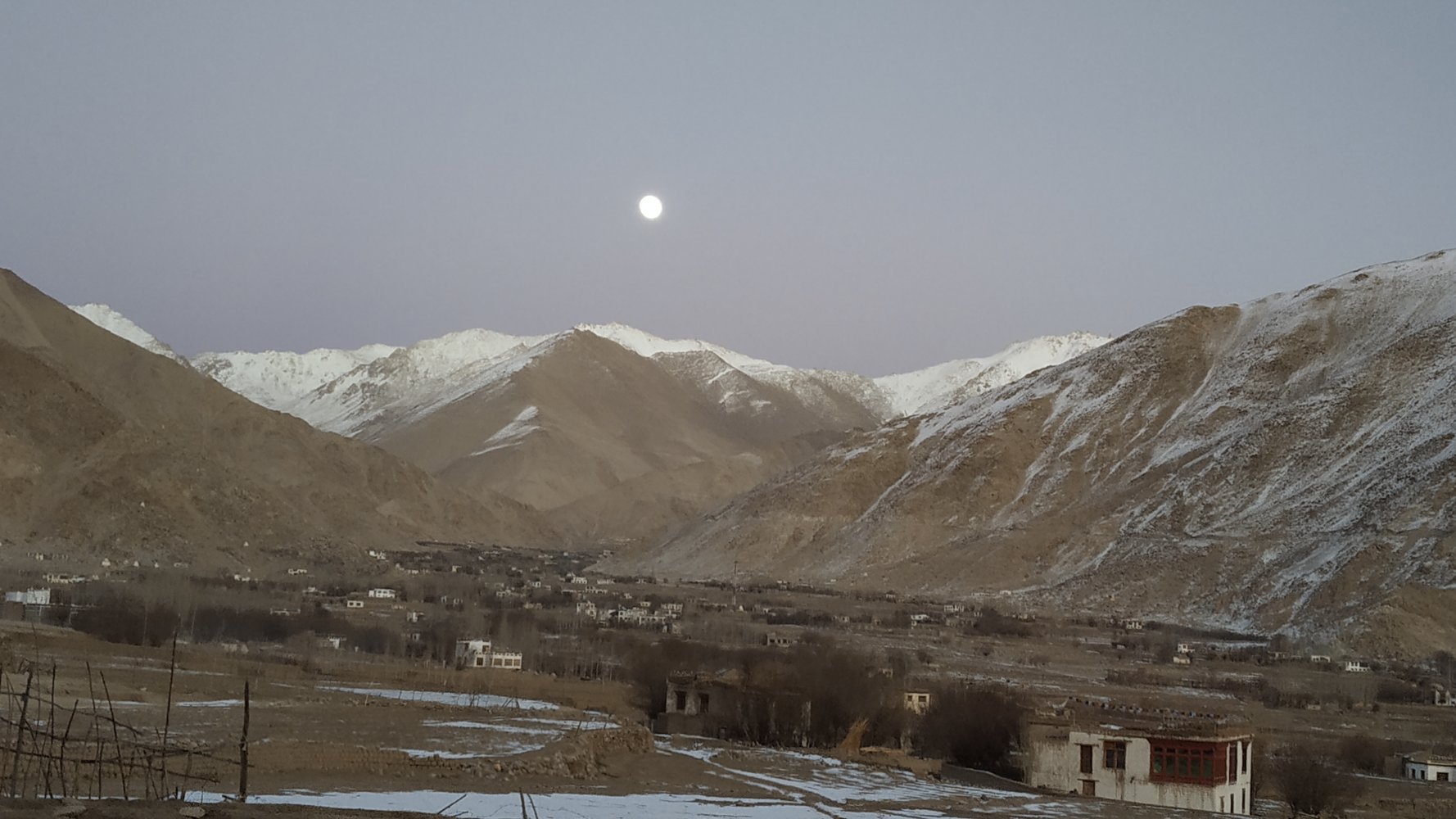 Just before getting Dark in Sakti, ChangLa hidden in those white mountains on right side...

Day 2 : It was ChangLa Day, world’s second highest motor-able pass at altitude of 5358 meters. Again, Sun God was smiling down upon me, gifting me blue skies without wind for as long as 60KM to Durbuk. Wouldn’t have been able to make the 1800mt ascent otherwise J. Despite of this gift, It was a tough day, min temperature -16C at ChangLA at noon without chill factor, ice jammed cycle’s disk brakes disks, icy & slipper roads. There was nothing I could do to prepare myself for this. I had to work twice as hard as I was not only trying to peddle at steep elevation but also struggling to keep my body warm in the extreme weather.
During my summer trips, I used to be delighted on the sights of downhill. My smiles soon faded away this time when I realized that in winters they are tougher than climbing. I was on the edge throughout the downhill, ChangLa to Durbuk, due to icy & slippery roads, head winds, no Sun (North face), temperature dropping to -20C +windchill. It was a long day 7am to 5:30pm. I managed to reach Durbuk before it got dark and high winds.
Crossing ChangLa was one of the biggest challenge of the trip and was risky. Another factor were the Wild Dogs on this route, who can be very dangerous, luckily, I had no such encounter.
But the day was rewarding and fulfilling in all aspects. The scenes that I captured, the feeling that I experienced, and the fact that there is life that goes on everyday in that area, was something to die for, and no exaggeration. Again , I was welcomed to delicious home cooked food at Durbuk and a warm place to sleep. 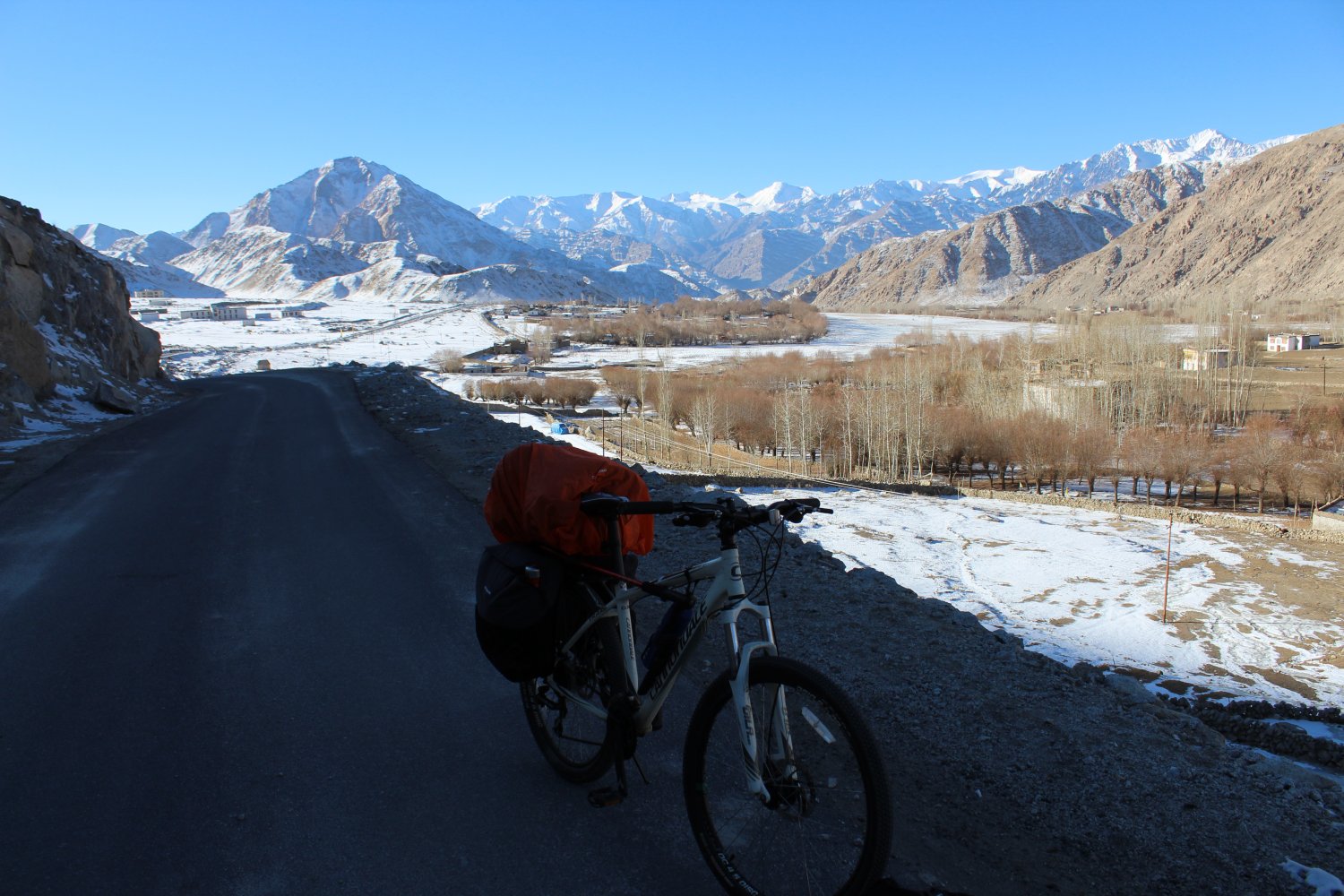 Sakti Village at back , Going towards ChangLa, 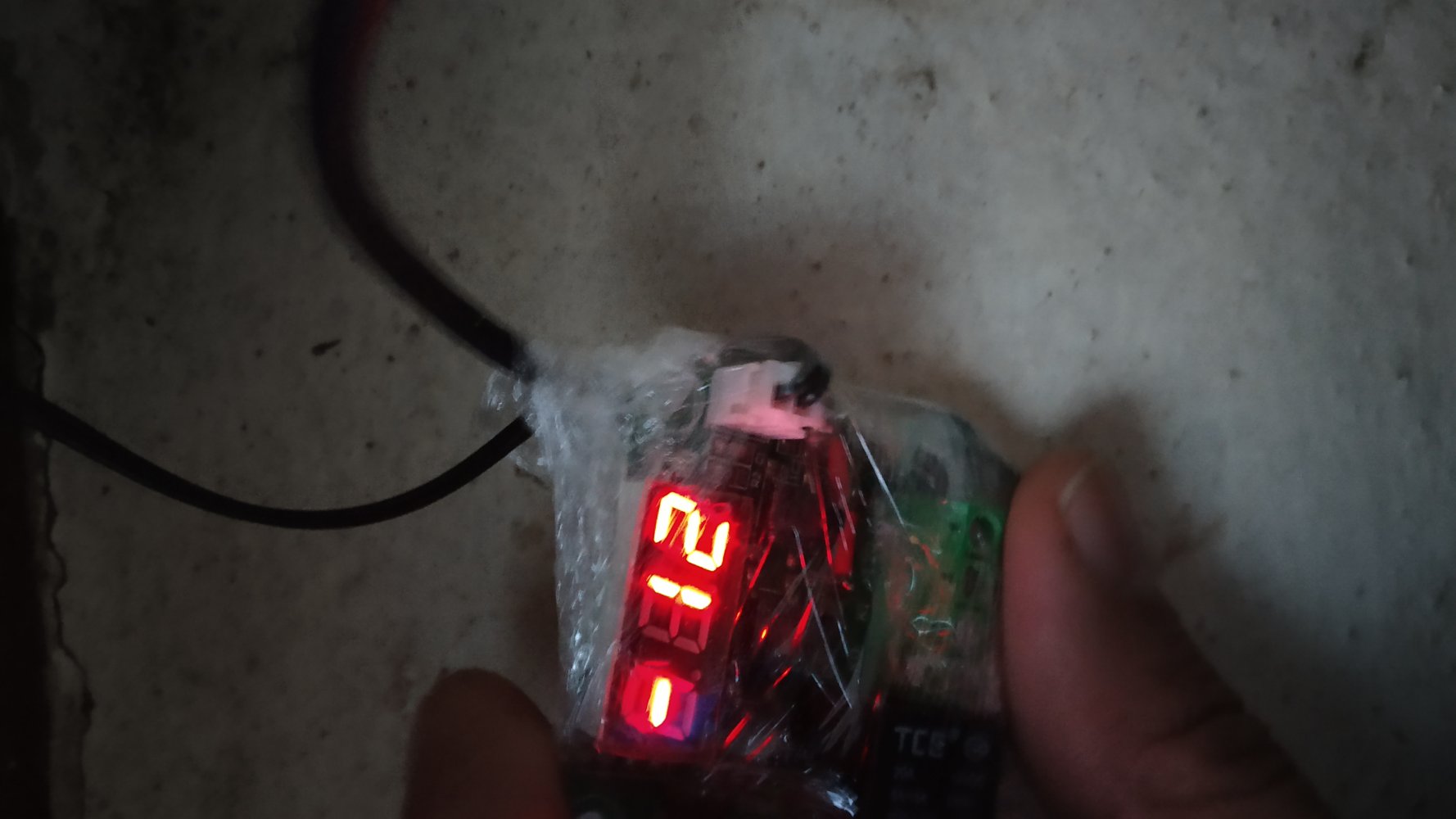 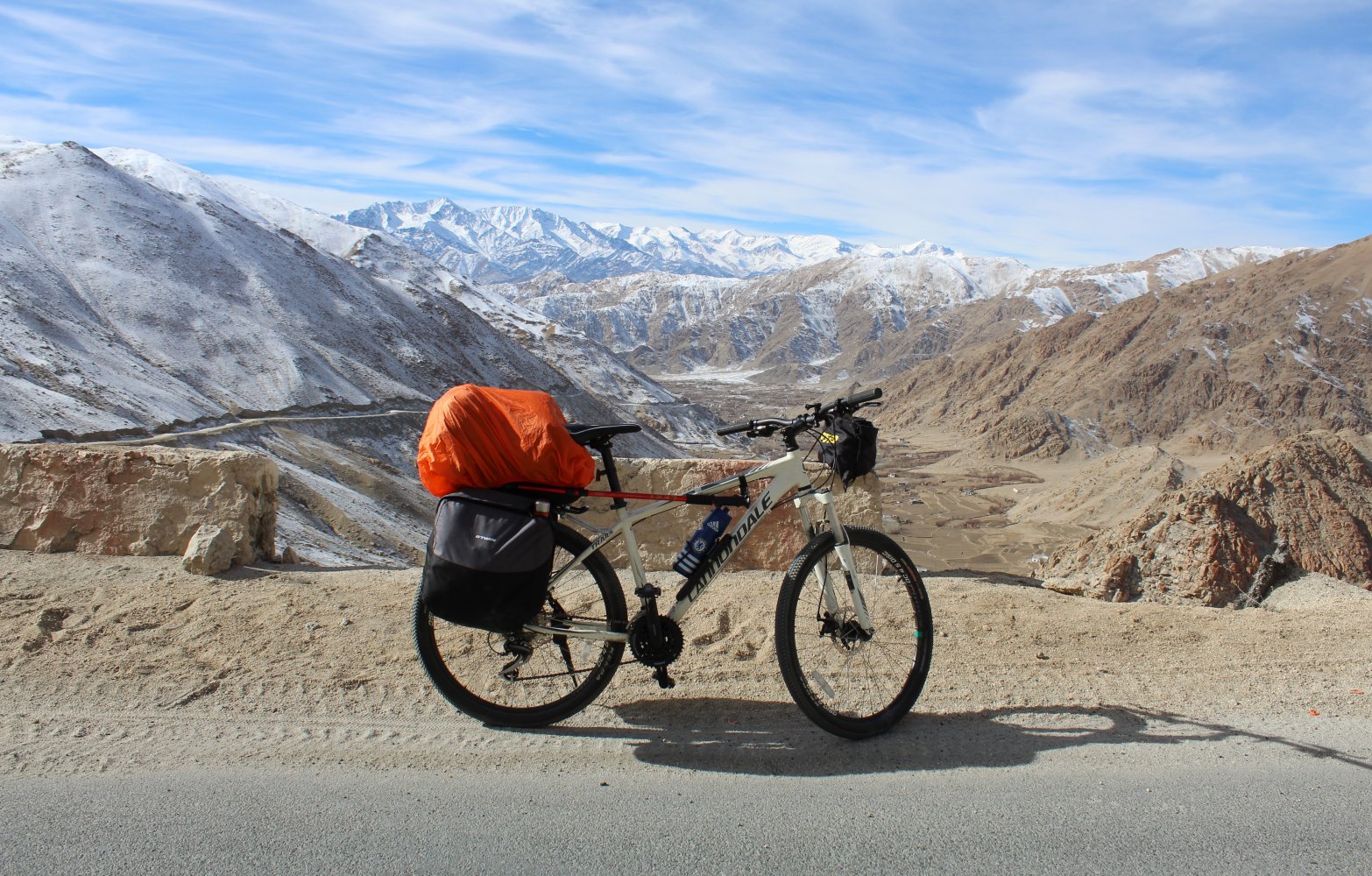 View of Sakti Village , All brown and frozen ... Trust me, picture doesn't capture fraction of the beauty of the Place 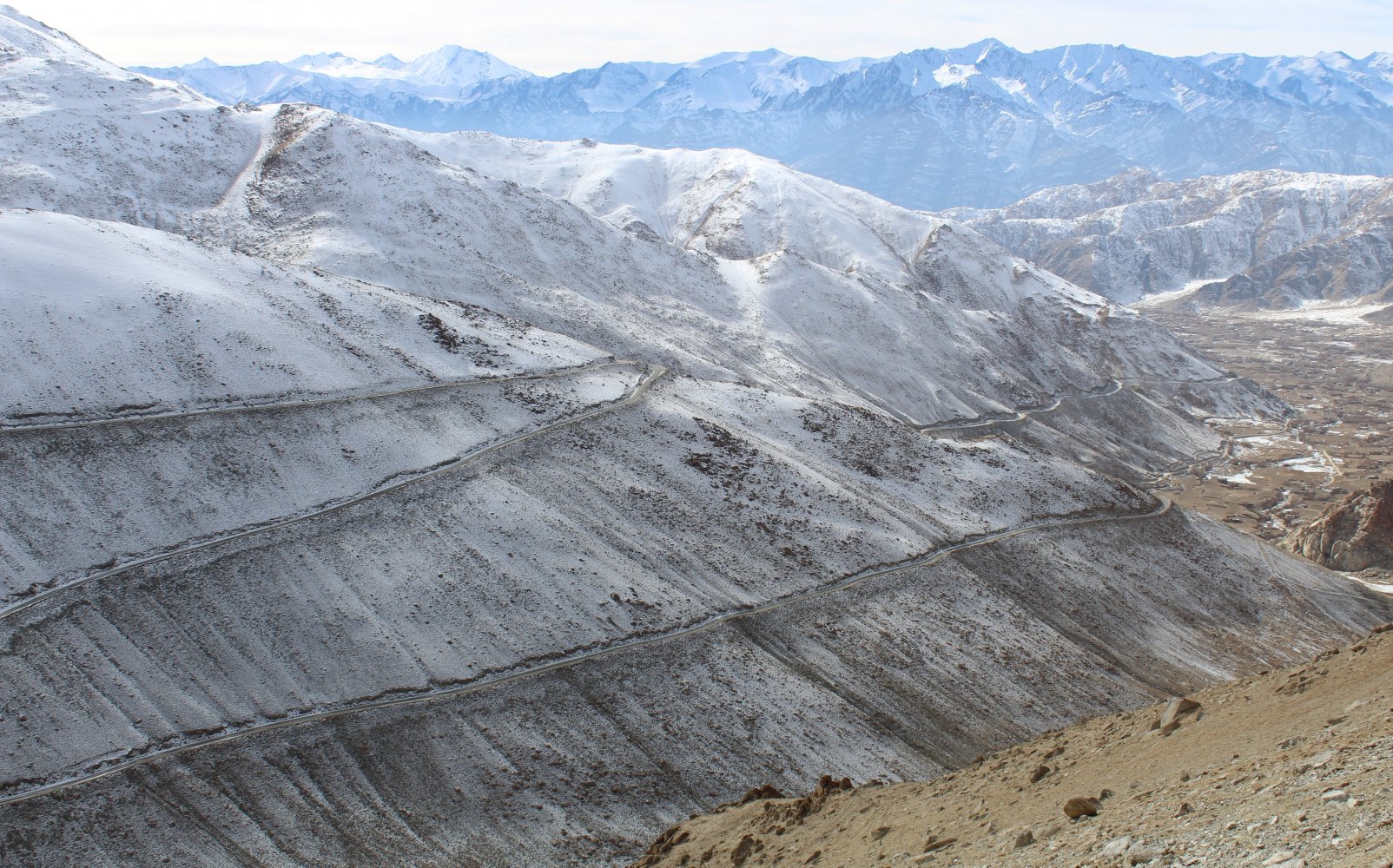 Happy to see, what I had covered so far but knew that much more was ahead... It was just starting ... 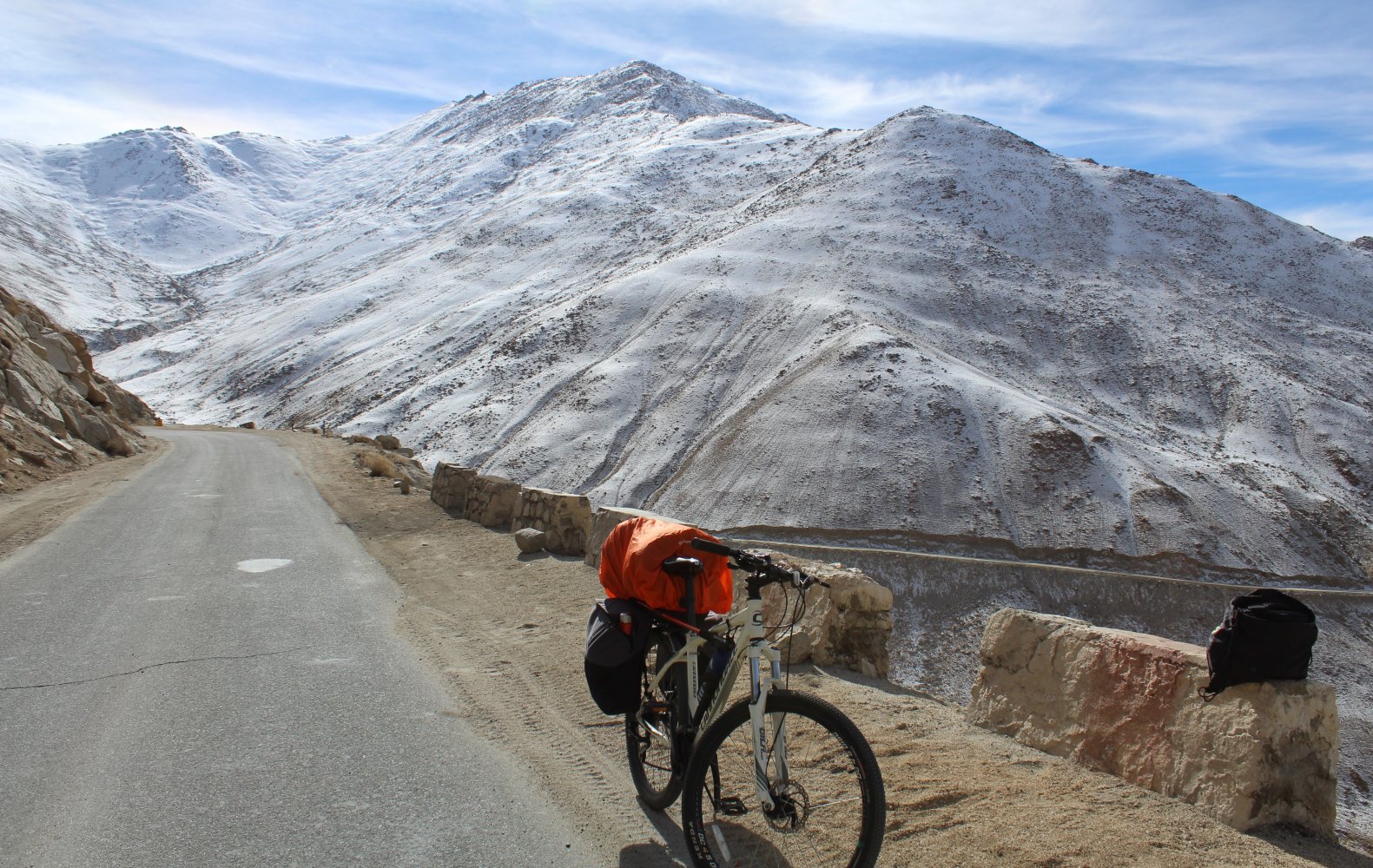 From here onward , I start to feel altitude and tiredness, still long distance to cover. I was rushing against time. I have to reach Durbuk before dark. ..
So no more time for picture....
At Zingral , ~13 KM from ChangLa top, thanks to Indian Army for providing me hot cups of tea at a warm place,packed some snacks and warm water to carry on . It was great experience. For security reasons, I am not adding any pictures related to army personnel and locations... 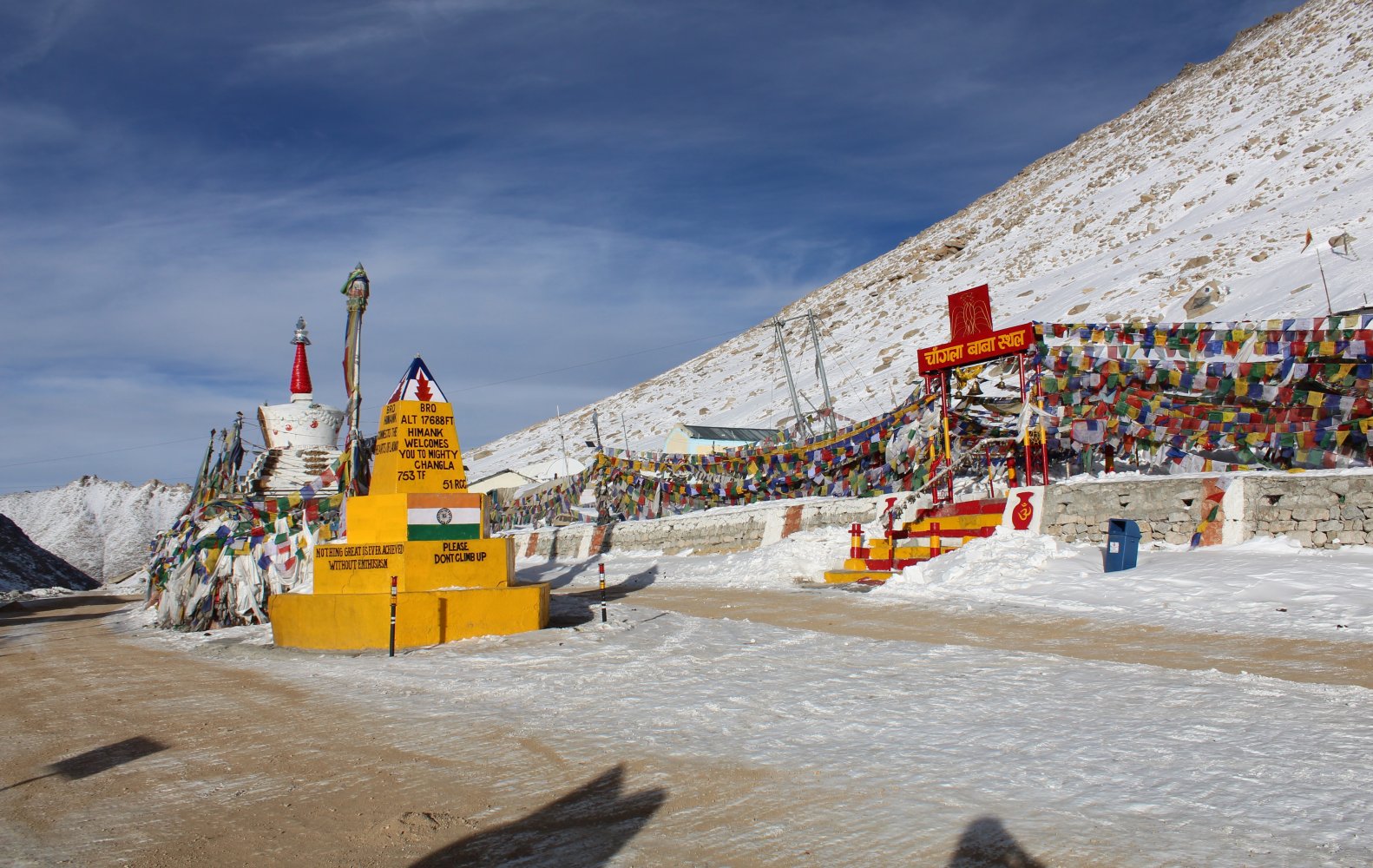 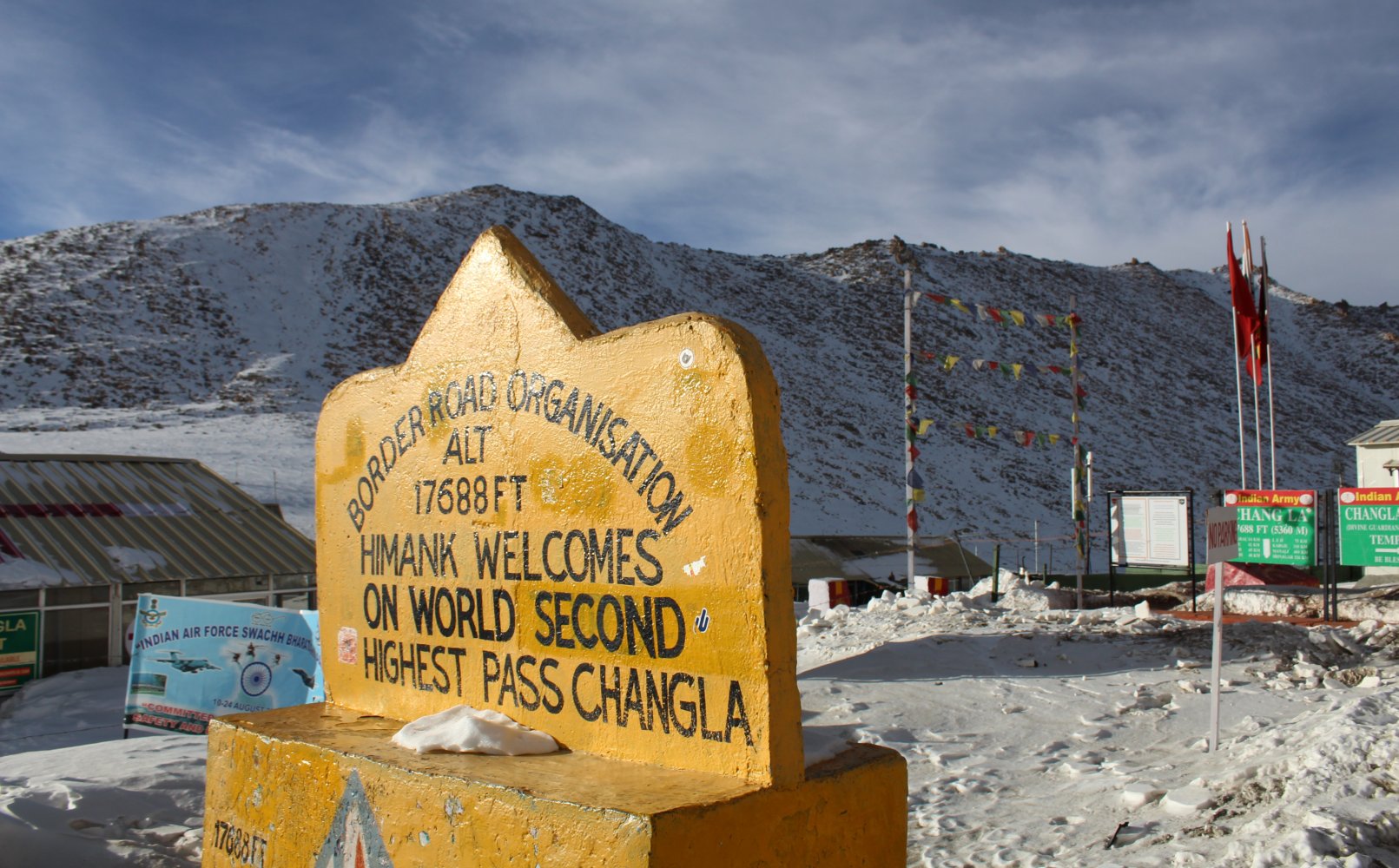 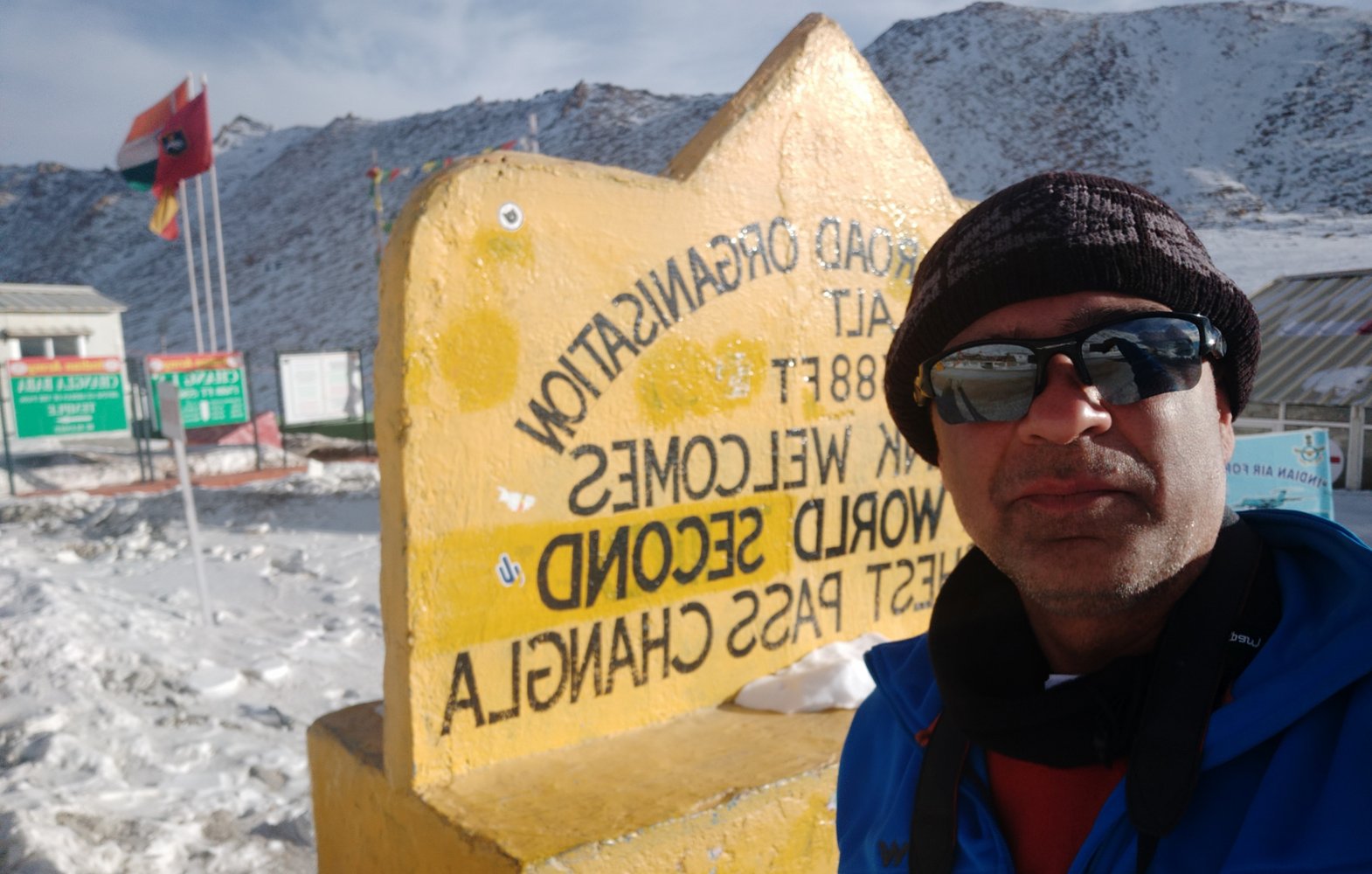 Finally reached Changla , approx. 90 minutes later than planned. Cycle "disk breaks" were stuck because of ice and debris . Once again , thanks to Indian Army for proving help , hot water to clean disk breaks and hot cups of teas.... Few selfies till cycle's disc breaks getting cleaned with boiling hot water.
Clean disk brakes were life saving . Thanks to ARMY.

Now onward, there was time pressure and conditions on road for cycling was very bad which includes icy & slippery roads, wind (issue of frostbite ) ,no sun....
Coming down from Changla was a life time experience of down-hill. During down hill , it is free flow at 6%+ decline which increases wind chill, multi fold risk of slipping on icy road, no peddling which means body is not heating . It is totally different that uphill in winter. You wish you do all uphills in winter and all down hills in summer 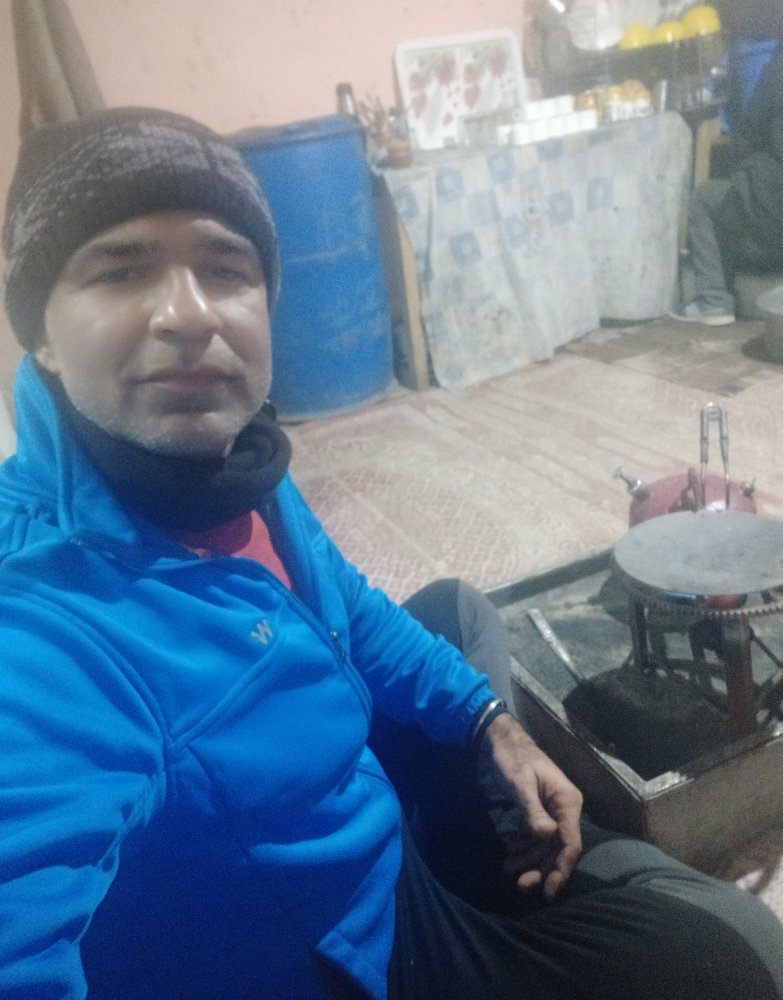 Finally made it to Durbuk , downhill was much tougher than uphill. A stove in picture is another life saver at that point
Got warm place to stay and great food 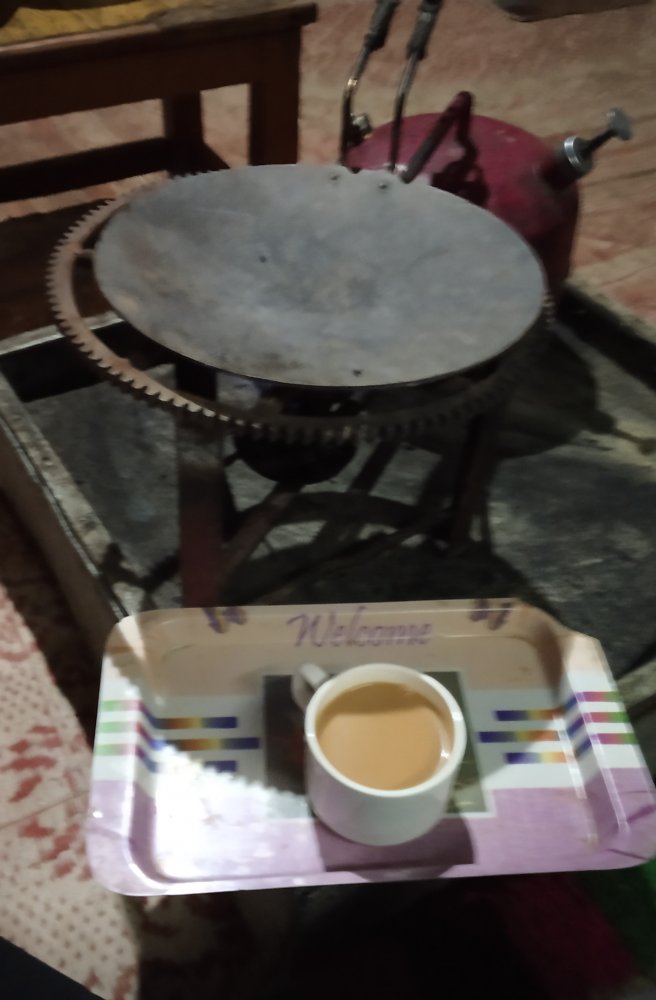 Winter cycling in Ladakh, kudos to you, bro!
C

chander said:
Another factor were the Wild Dogs on this route, who can be very dangerous, luckily, I had no such encounter.
Click to expand...

chander said:
Happy to see, what I had covered so far but knew that much more was ahead...
Click to expand...

Which bike is this sir.
Some specifications will help.

skysat2005 said:
Winter cycling in Ladakh, kudos to you, bro!
Click to expand...


Dogs , they wander around in packs ,

citymonk said:
Which bike is this sir.
Some specifications will help.
Click to expand...