It again started in October 2018. Kashish called up and proposed one more winter Spiti trip during late February 2019. Though it was quite early to commit yet I said yes to this journey. Few more joined in with confirmations and few more showing interest to join without committing. At one point we became a group of about 9 enthusiasts. However, as the day of reckoning arrived we were left with 6 participants only. We firmed up the date of travel with head start on 22nd night and back by 2nd March 2019. With 8 days and an extra night at our hands, we were pretty hopeful of reaching Spiti this time. The team comprised of yours truly Alok Sinha, Kashish Tandon, Anubhav Tuknait, Swagat Tushar, Angad Adlakha and Amit Kapoor. Kashish was coming from Kuwait, Anubhav from Pune, Swagat from Hyderabad and Amit from Agra. Only two of us were from NCR. We had many vehicles at our disposal with Pajero belonging to Kashish, my Thar, a Hexa, a 4x4 Duster and another Thar. Finally, we decided to do the trip in 4x4 Pajero and a non 4x4 Hexa belonging to Angad.

On the night of 22nd February 2019 we embarked on another winter trip journey, hoping to finish what we could not since 2014. Angad coming from Gurgaon picked me up from Janak Puri Metro Station and thereafter on our way to Mukarba Chowk, we picked up Anubhav near Paschim Vihar. Kashish alongwith Amit and Swagat were coming from Ghaziabad via the EPE. A common meeting point was decided while we were both on the road. We were the first to reach Sukhdev Dhaba at Murthal and had to wait for almost an hour for Kashish to reach the spot. In the meanwhile we finished up with dinner and later Kashish and team joined. Around 11.45 pm we left Murthal with next stop at Zirakpur McDonalds to freshen up. Moving on from Zirakpur we made another quick break at Panchkula as we had to pick up Pajero snow-chains from a friend of Kashish. It was about 3.00 am in the morning. I was sure that it was not the best time to wake up anyone. We were lucky to come out alive at that un-godly hour.

All set for the trip with new back-pack

Masala Chai while we waited for Kashish

Angad and Anubhav (L to R)

Once we hit the mountains I dozed off and hardly have any memories of the route, anyways there was nothing to see in the darkness apart from few frantic calls from Anubhav whenever Angad missed the turns. Hardly mattered to me, I was already dead asleep. I came to senses once we crossed Shimla. This was the time when sun started to come out throwing some yellow on the mountain ranges.

Around 8.00 am we were knocking doors of the Hotel Hatu at Narkanda for morning discipline. The approach to the Hotel was all covered in snow and ice. The Pajero climbed up easily. No one was sure of Hexa doing the same. Amidst talk of leaving Hexa behind, Angad revved up the engine and pushed ahead. Lo and behold, Hexa made it to the Hotel without breaking a sweat. It was a euphorious moment both for Hexa and Angad. It gave us the much needed confidence about Hexa making it to frozen Spiti, only to be shattered within an hour. Sometimes god choses to be very cruel. Anyways, we freshened up at Hotel Hatu and ordered breakfast. It was a usual fare. Around 9.15 am we happily left the Hotel after paying up. Angad had to reverse and he got stuck in hard ice. All the euphoria was gone within a second. The tyres were spinning and the car would not budge. It took a great effort and lots of shoveling and pushing around before we could get Hexa on the move again. We wasted more than half an hour doing this. Finally around 10.00 am we were able to leave Narkanda. We tanked up at the Narkanda fuel pump.

Journey after Narkanda was smooth with better roads and sunny weather. We made few stops enroute to enjoy the vistas. While crossing Rampur Bushahar, Kashish and team stopped to visit the Hanuman statue right before the town starts. We went ahead and waited for Kashish at a fabricator shop in a small town after Rampur. We got some repair work done for the snow chains we were carrying. We had to wait for almost half an hour before they could join us. We were about to leave when Amit said that he had lost his sunglasses, probably he left them at Hanuman Statue at Rampur. We were about 14-15 kms ahead of Rampur and thought to give it a pass. But then Kashish told us that it costed 40000 bucks. Now we had no choice but to send a search party to extract the valuable asset. Kashish along with Amit went to the temple while we waited at the fabrication shop. It took them long them usual. Tired of waiting and hungry, we headed towards Jeori and ordered basic lunch in one of the dhabas. Once we were through with our lunch then Kashish and Amit arrived, with the 40000 worth sunglasses. It happened that he forgot them at the temple. The priest found it and kept it besides the main idols. But when Kashish and Amit reached the temple was closed and the priest had left. There was another local waiting outside the temple. Amit gave his mobile number to this man and asked him to call in case the glasses were with the priest. While they were about to reach Jeori, Amit got a call from this man informing him that the glasses were found. They again rushed back to temple and collected the glasses from the Priest. Thereafter they joined us at Jeori. The whole incident set us back by more than 2 hours at least, may be more. Clearly frustrated, we warned Amit never to take out his glasses ever again on this trip. 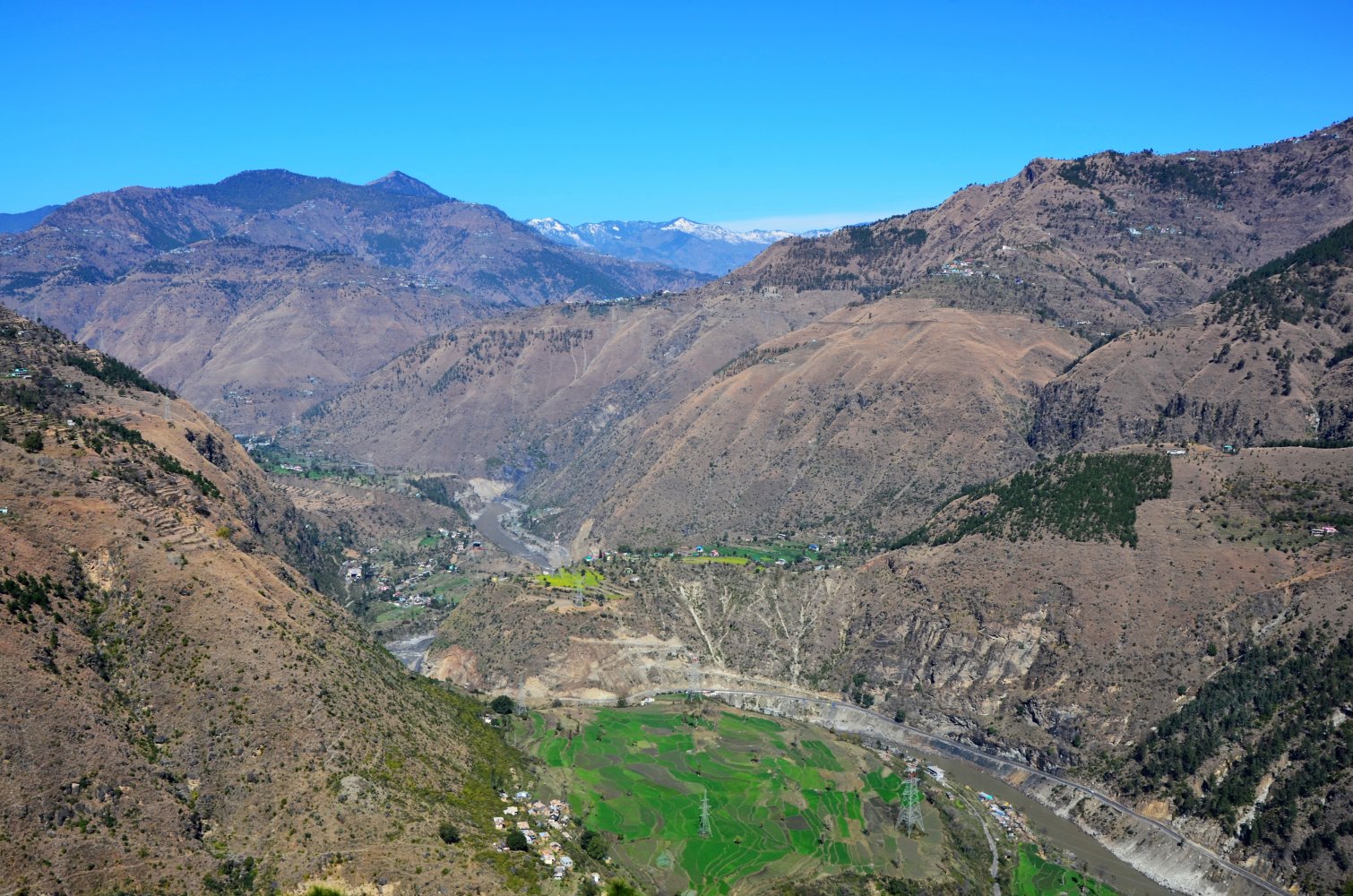 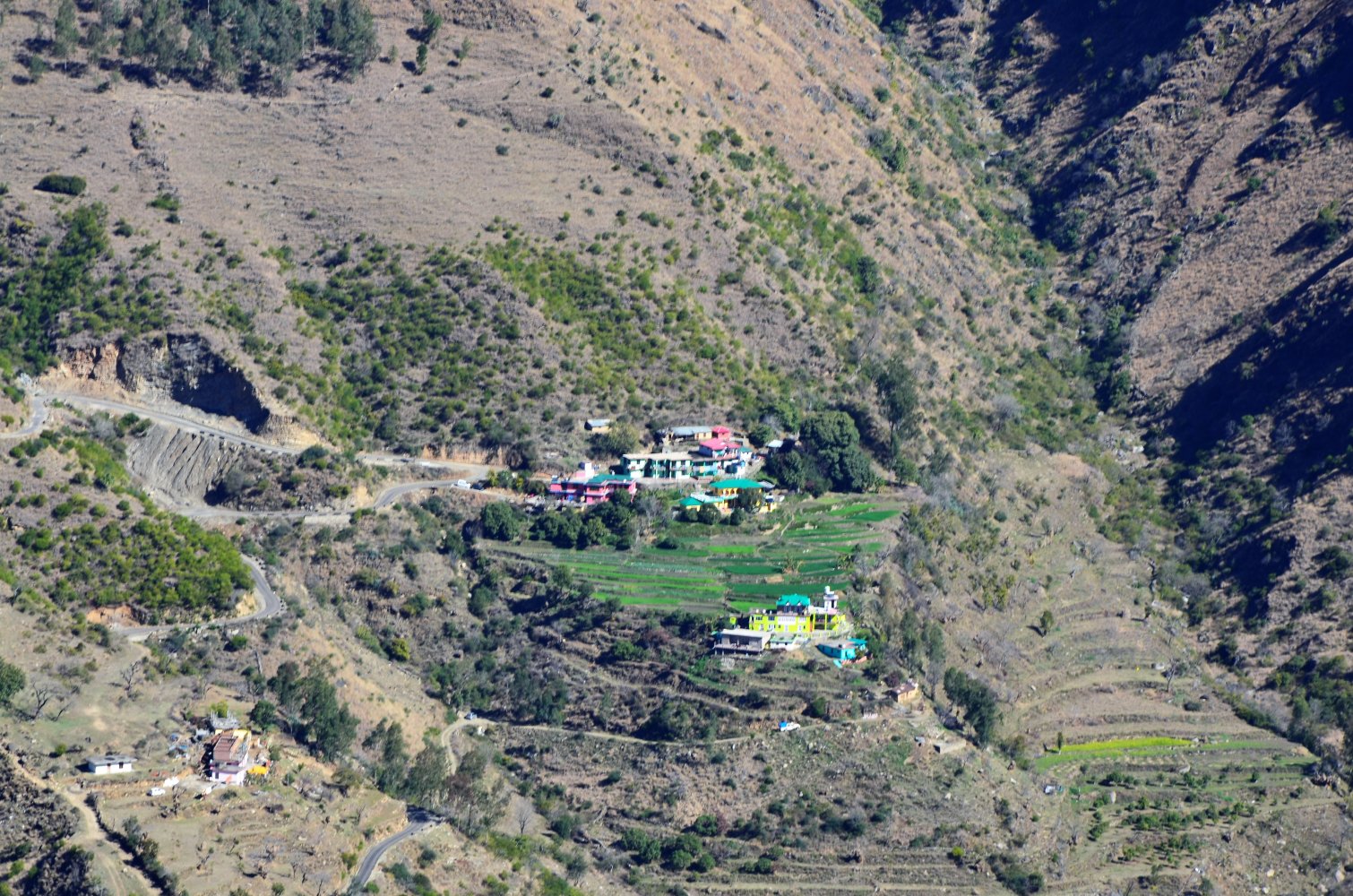 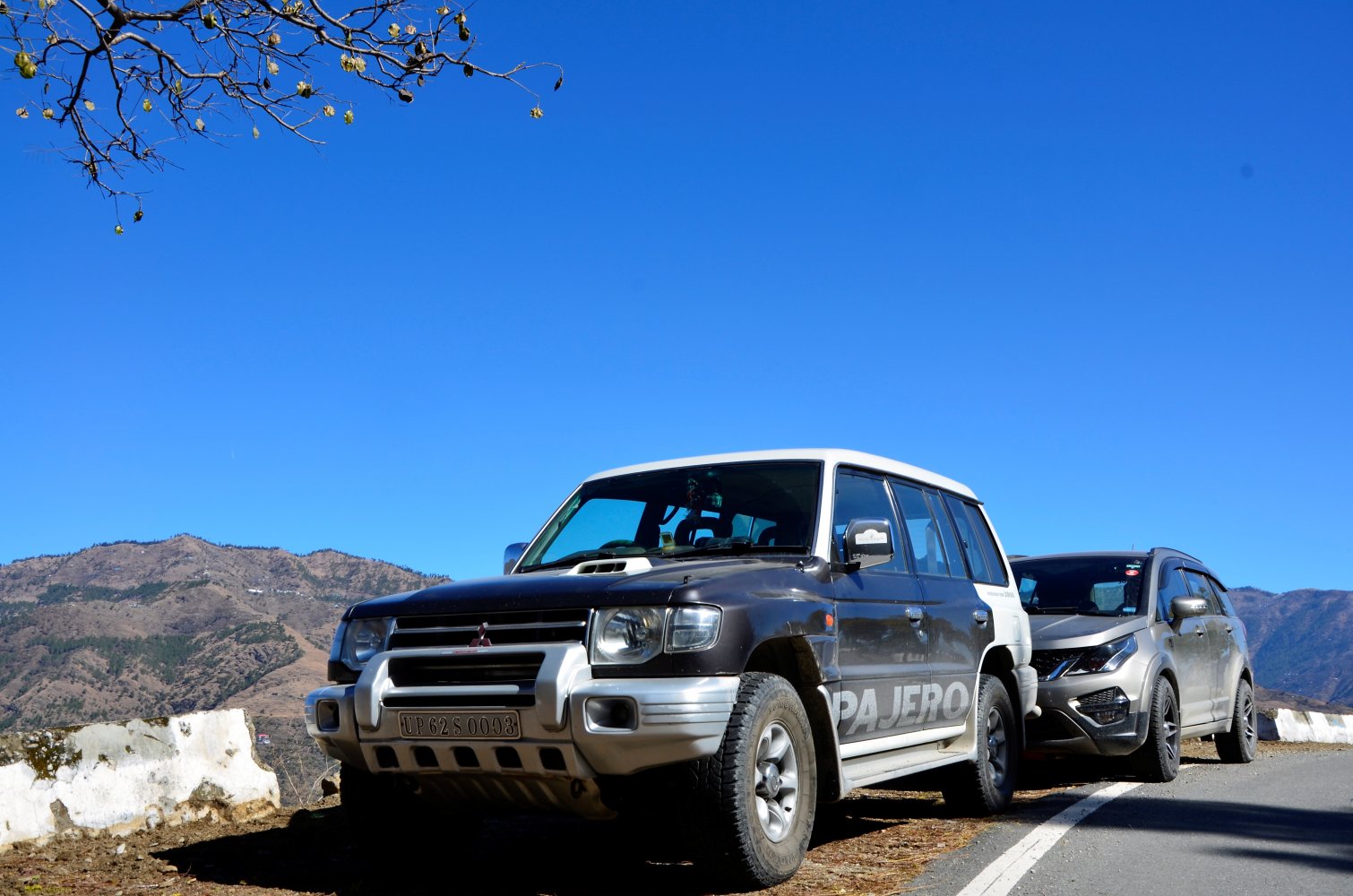 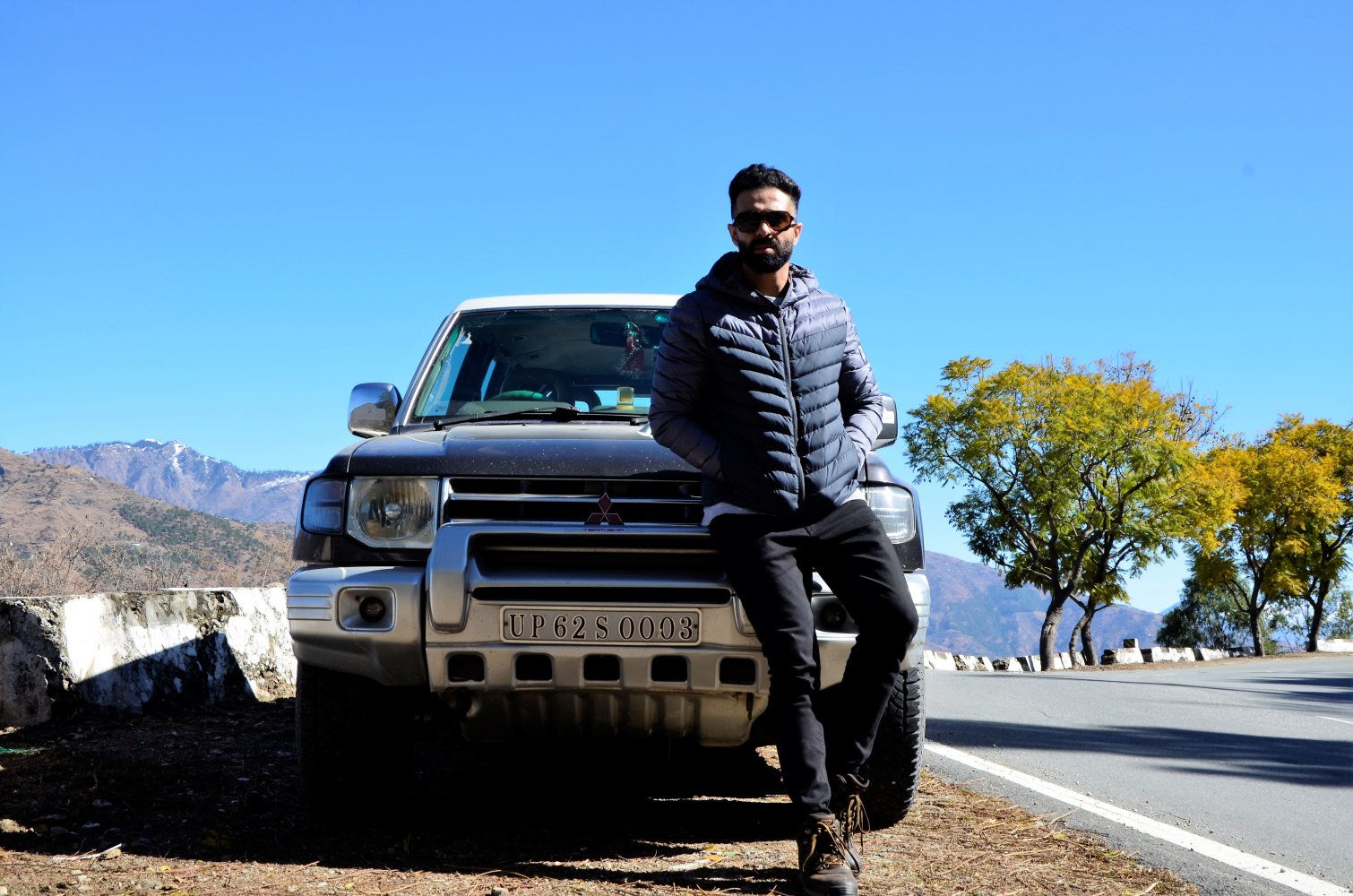 We were booked at Hotel Shivling View near the PWD Guest House at Reckong Peo for the night. It almost got dark by the time we reached Reckong Peo. We were completely exhausted by then. It took a great deal of effort to force ourselves out of the car into our rooms. It didn’t took us long to fall asleep.

a small break before Reckong Peo

views while climbing up towards Reckong Peo

The day break was dramatic with light snow fall. The mountain ranges in front were under a veil of clouds. Our target for the day was Shego, few kilometers before Kaza, which we thought was achievable. We were constantly in touch with RK Bharat about the conditions enroute. We were told to be careful around Nako. After having breakfast we started for Nako around 9.30 am. We again tanked up at Reckong Peo fuel pump. We could hardly drive for about 20 kms when we came across a huge landslide after Kharo Bridge. We assessed the situation and decided to head back to Reckong Peo since the landslide could only be cleared late in the evening.

Pajero cannot be left behind

But before checking in to our hotel again, we went ahead towards Kalpa, which was covered under snow and approach was difficult with frozen ice on the road. Hexa did well to reach Kalpa while it was easy for Pajero in 4x4 high. The beautiful vistas kept stopping us. There was a mild snowfall as well. After Kalpa, the roads were full of snow and got extremely narrow at places even for a single vehicle to pass. Somehow we managed to reach the suicide point at Roghi village few kilometers after Kalpa. It got very windy and heavy snowfall made us head back to Reckong Peo.

Angad posing with his Hoonigan 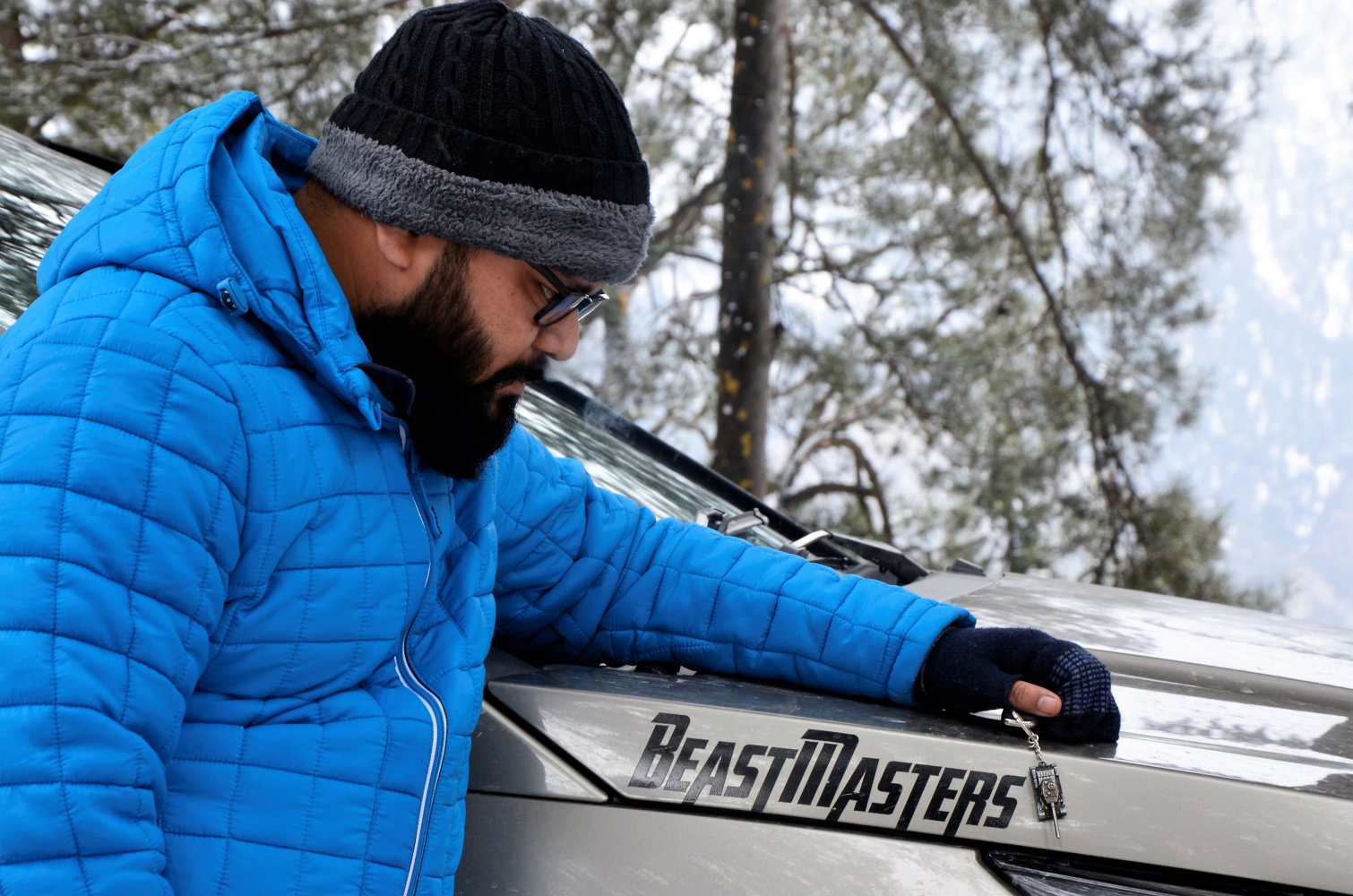 Amit without his sunglasses 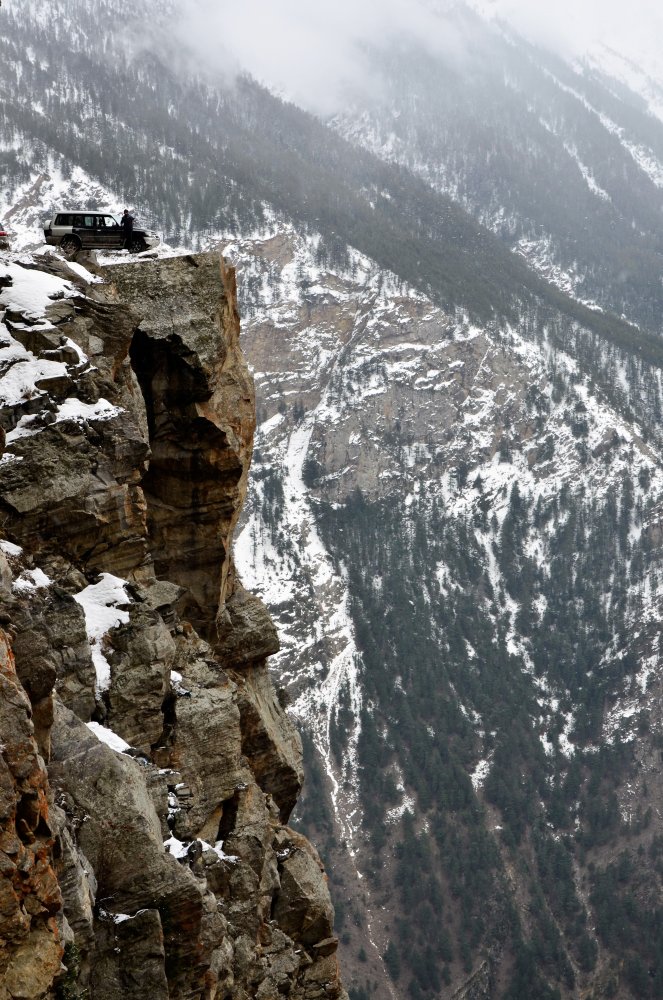 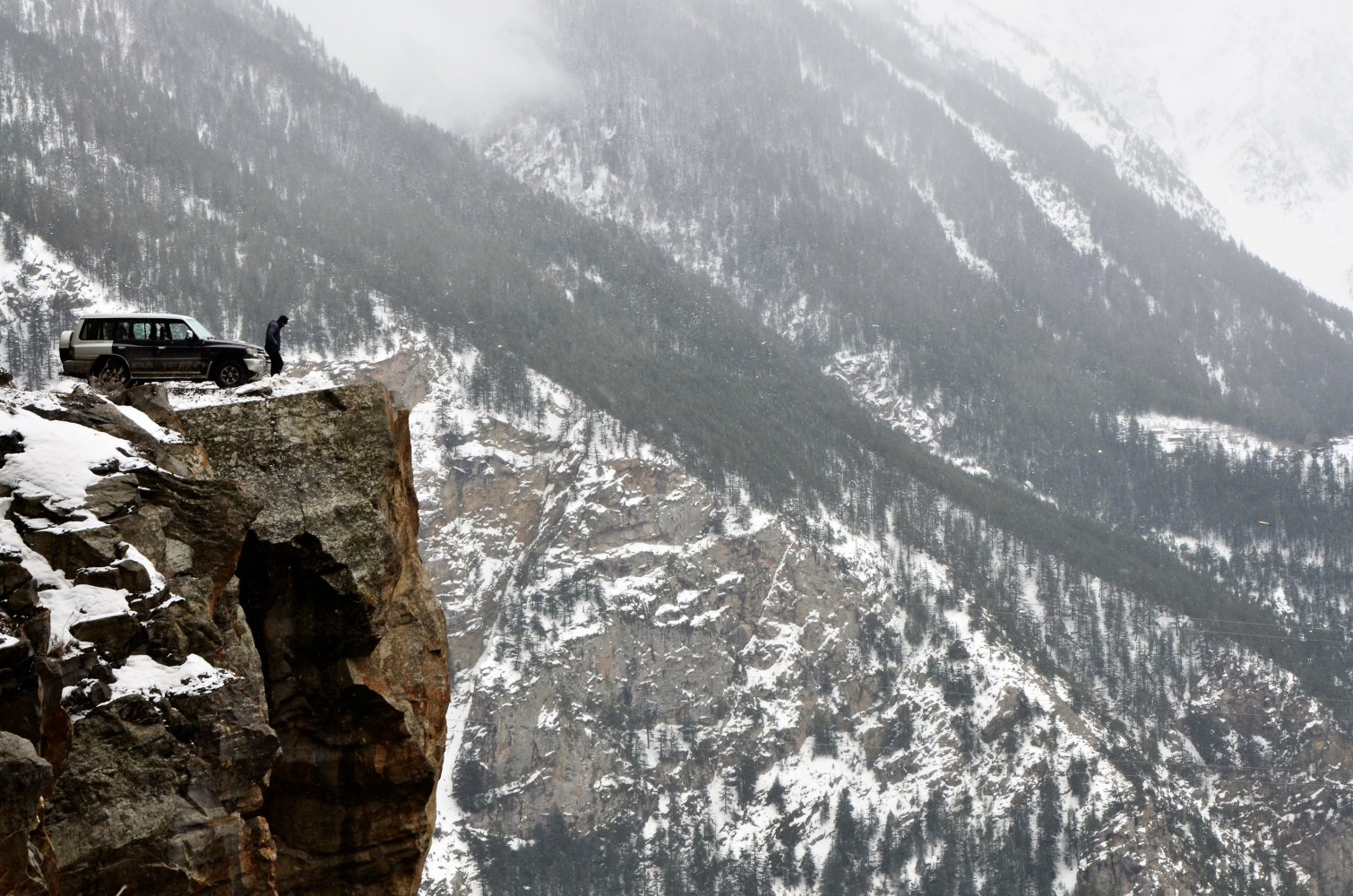 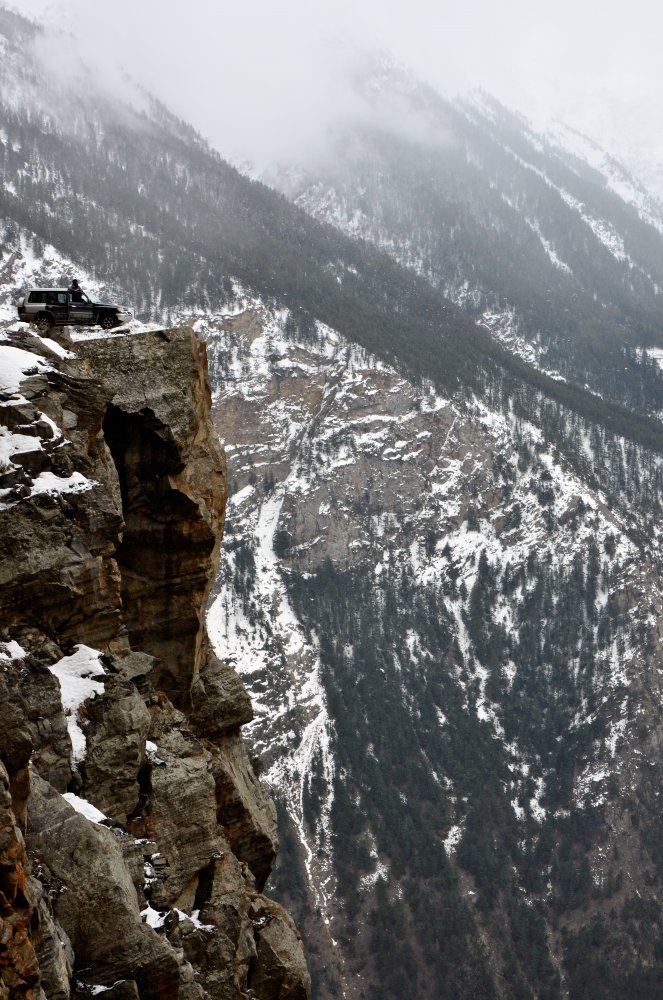 We entered the main market in the town and had some proper lunch. We picked up some essentials from the market and headed back to our Hotel. After resting for a while, we decided to try out the snow chains we were carrying for both the vehicles. The snow chains for Pajero were installed swiftly. However, we were shocked to learn that snow chains for Hexa were short in size. Angad was handed over the wrong sized snow chains. It was a disappointing realization. However, we tried out the Pajero snow-chains and they fitted well on Hexa tyres. We were relieved to note that. Crossing our fingers we went back to the comfort of our rooms. Evening was spent chit-chatting and planning about the big day when we will reach Spiti Valley.

for the sweet tooth

Angad with his mace

and forgetting them..
rich fella..

Awesome Alok Bhai. Nice to see you back with awesome blog.